One of the benefits of being a rare plant collector is that you usually have some really valuable trade bait sitting around somewhere. After a fruitful trip to Florida in the spring of 2008, I had just that. I came home with a bunch of rare palms that people wanted and would be willing to trade for. In that Florida score were a few Dypsis cabadae x decaryi (Dypsis “White Triangle”), which is a very desirable palm but seldom available. Knowing I am a sucker for any plants from Madagascar and New Caledonia, a fellow rare plant collector friend of mind offered up some Atractocarpus from New Caledonia for a Dypsis cabadae x decaryi. Knowing I might not see these plants offered again, I jumped on the offer.

Atractocarpus is a genus of flowering plants in the Rubiaceae family. Its members are commonly known as native gardenias in Australia. The most common one grown in Australian gardens is Atractocarpus fitzalanii (Brown Gardenia or Yellow Mangosteen).  I love the look of the plant with its glossy green leaves and fragrant white flowers, but Atractocarpus fitzalanii is a difficult plant to grow in the ground here in Southern California. Knowing many plants from New Caledonia have a good degree of cold tolerance and do well in our climate, I was eager to grow these two new Atractocarpus in the ground here in Vista.

The little seedlings that I traded for that were barely, which were five inches tall at the time, turned out to be really slow growers—which wasn’t a shock. Why not? Because plants from New Caledonia always seem to be difficult to get past the seedling stage and they are almost always slow growers. This goes for the palms of New Caledonia as well as the other plants.

To give you an idea about how slow these Atractocarpus were to start growing, here is a picture of the Atractocarpus rotundifolius on the left and the Atractocarpus bracteatus on the right as you would see them today. Remember, these were small seedlings in 2008. That means it took 6 years just to get to this size. Six-foot tall fence needing a paint job for scale. 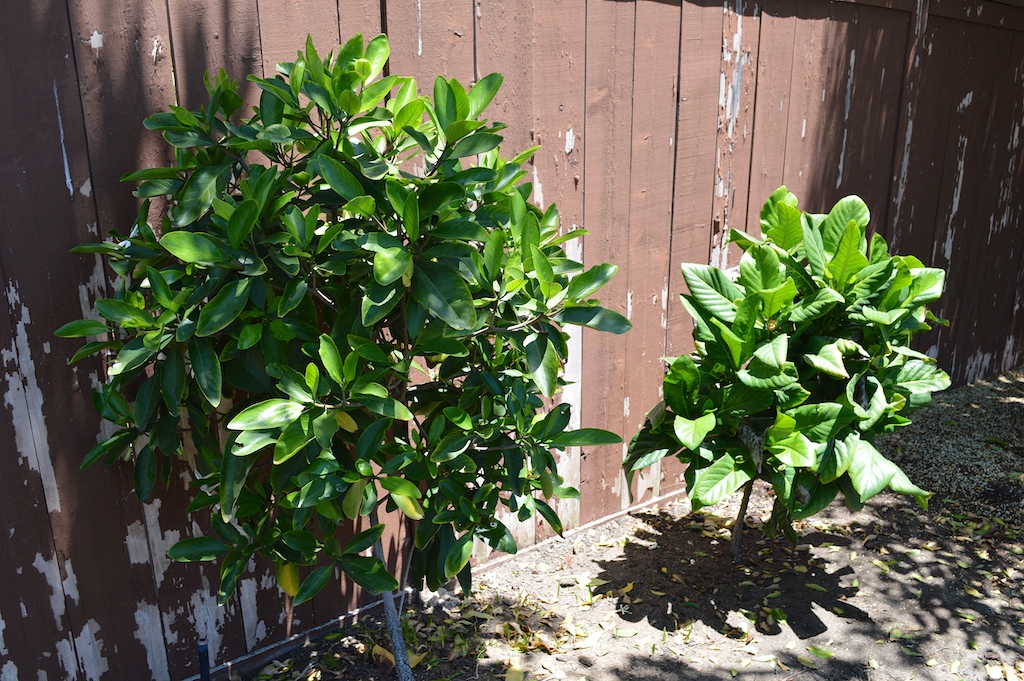 The plants I received in trade came with no species name. They were only sold as two different New Caledonian Atractocarpus. To identify and label my unknown Atractocarpus with their correct names I had to use the Endemia.nc website to do my research. I am pretty certain I have the correct names, but if someone has another opinion, I would love to hear it.

Below is Atractocarpus rotundifolius.  This picture was taken about a month earlier. The second photo was taken yesterday to show how floriferous the plant can be. 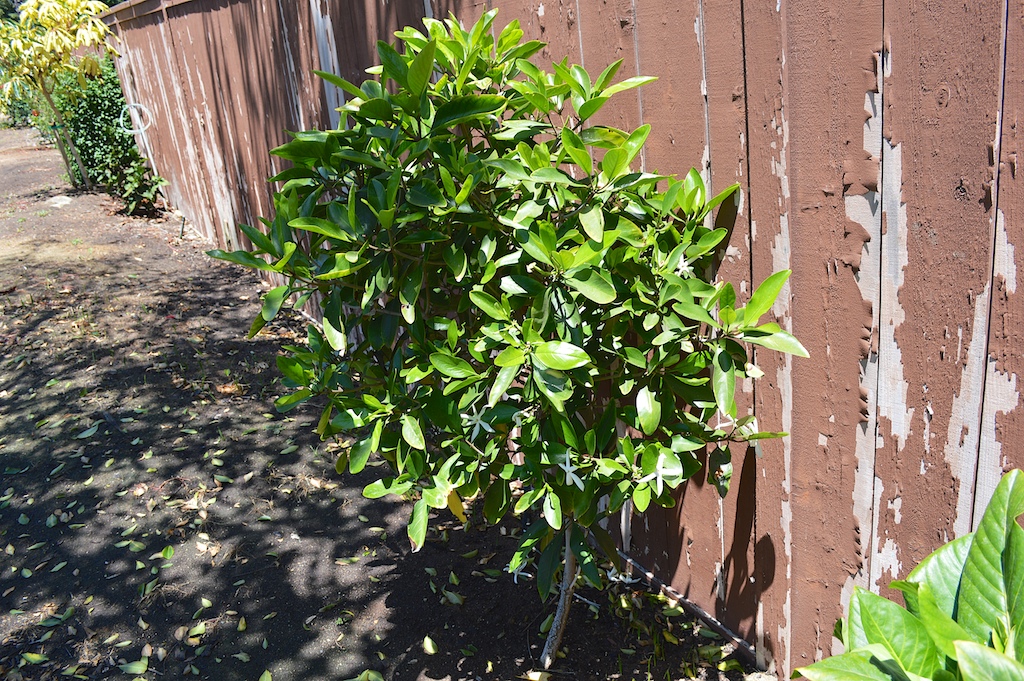 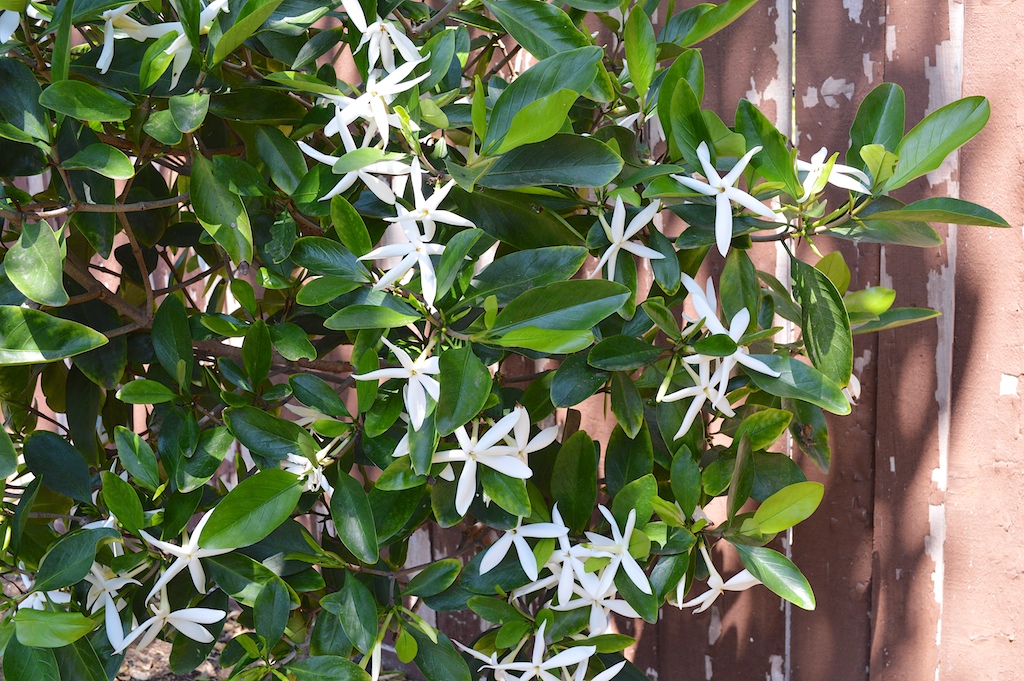 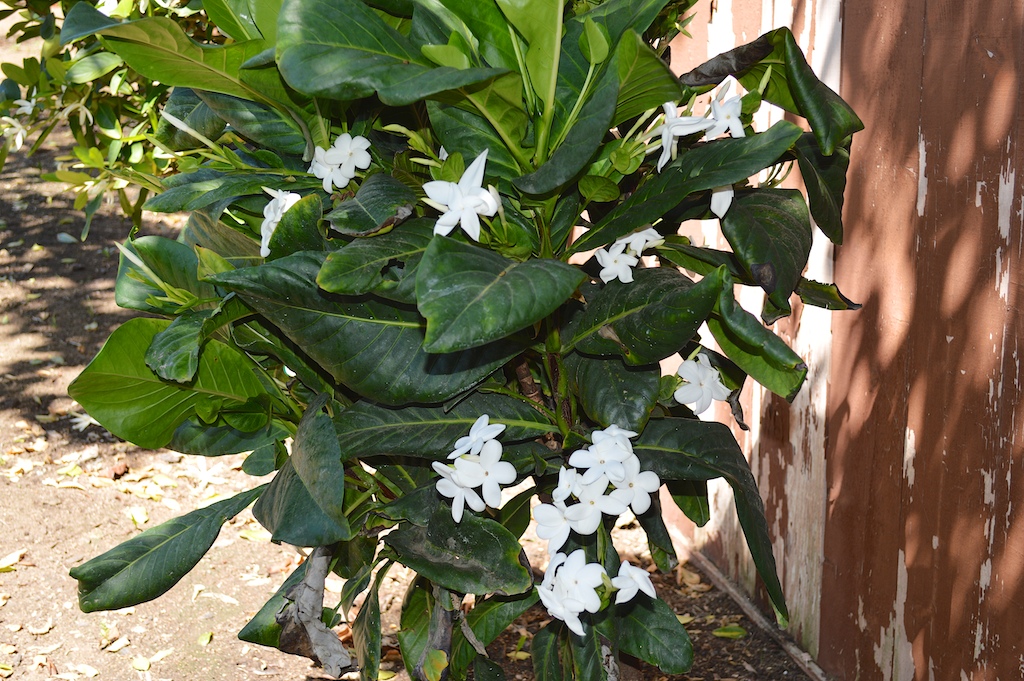 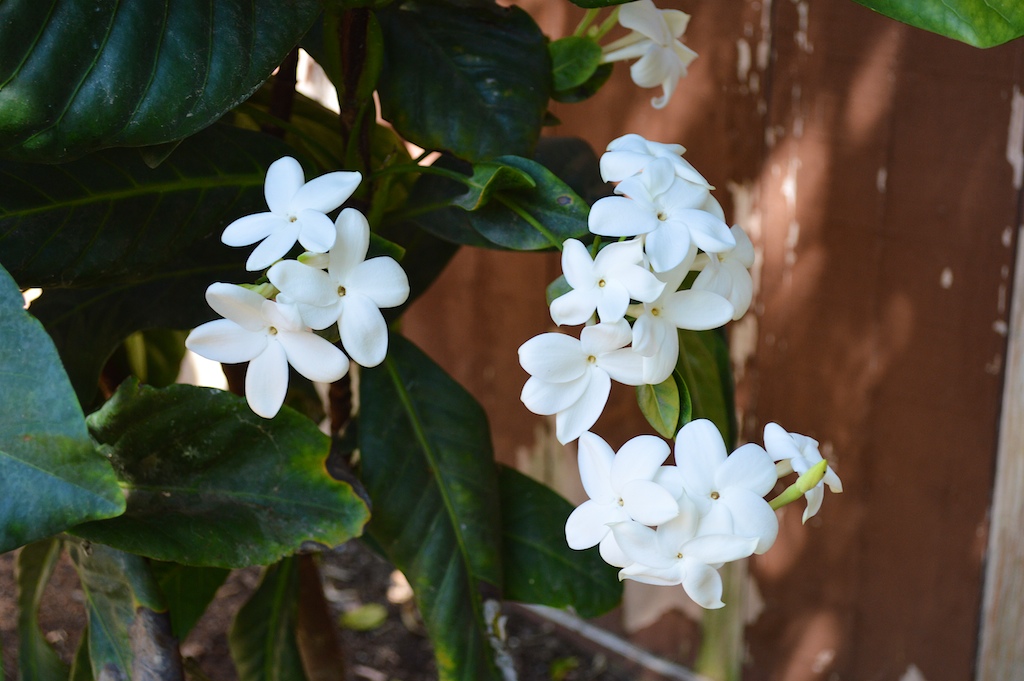 From the photos above you can see some striking differences between the two species. The two things that should leap out right away are the differences in their leaves and flowers. Two other noticeable differences are that the flower on Atractocarpus rotundifolius if fragrant like a Gardenia, however Atractocarpus bracteatus has no scent at all. The other difference is in the two plants’ peduncles. Rotundifolius has a short peduncle (first picture) while Bracteatus has a long, leafy peduncle (second picture). 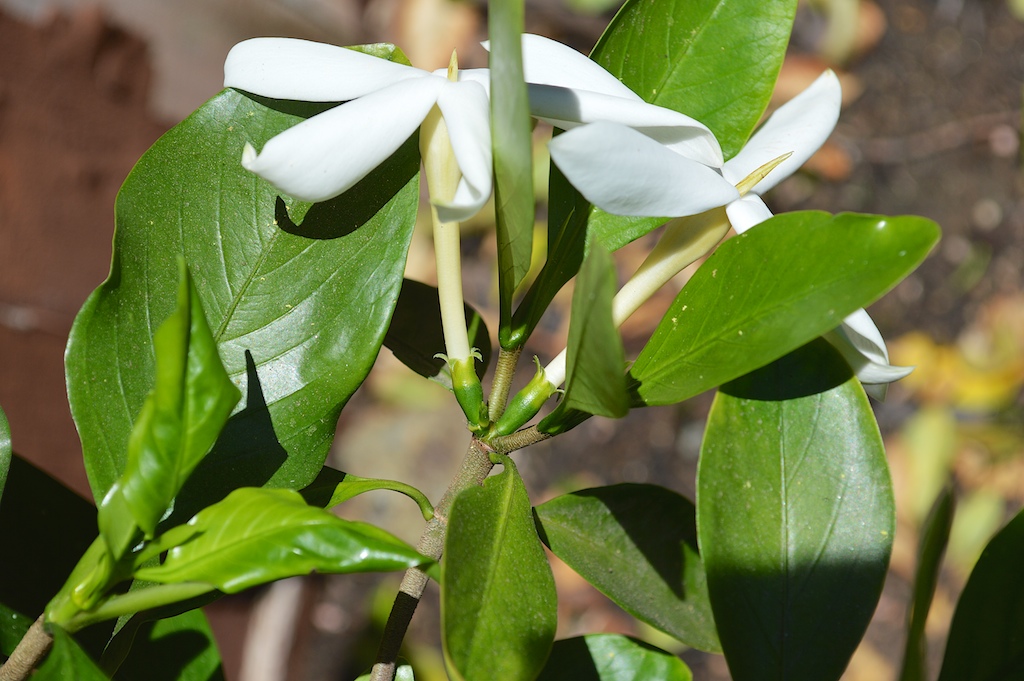 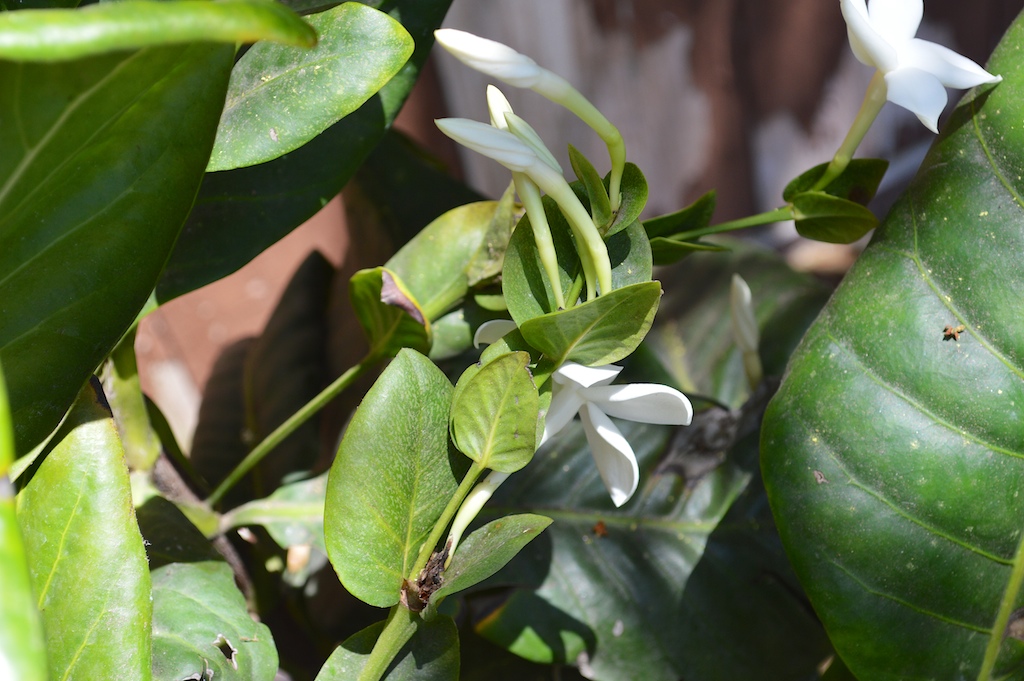 To provide more clarity on the differences between their leaves and flowers, I took the following comparison photos. Bracteatus is on the left and Rotundifolius on the right. 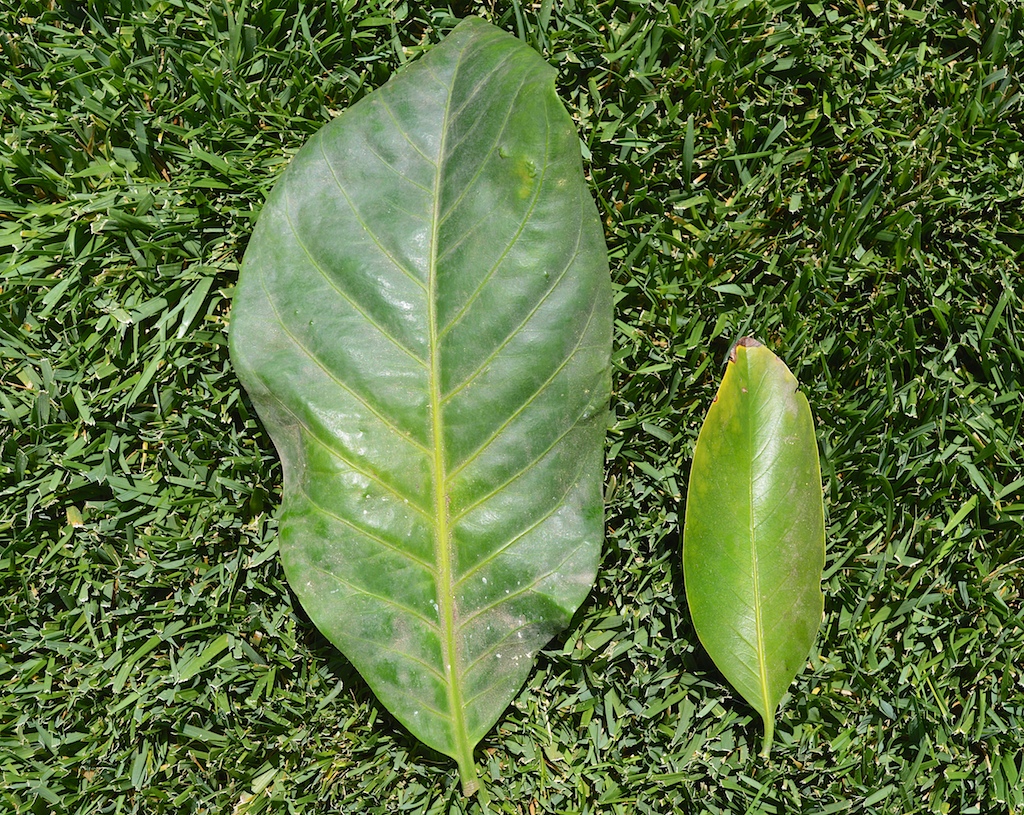 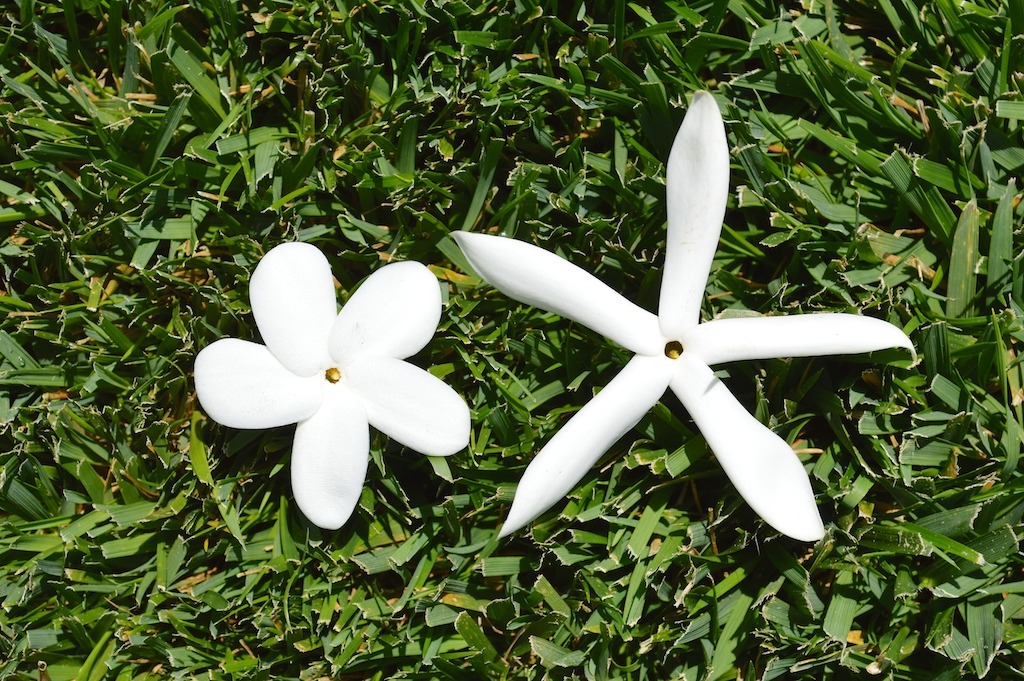 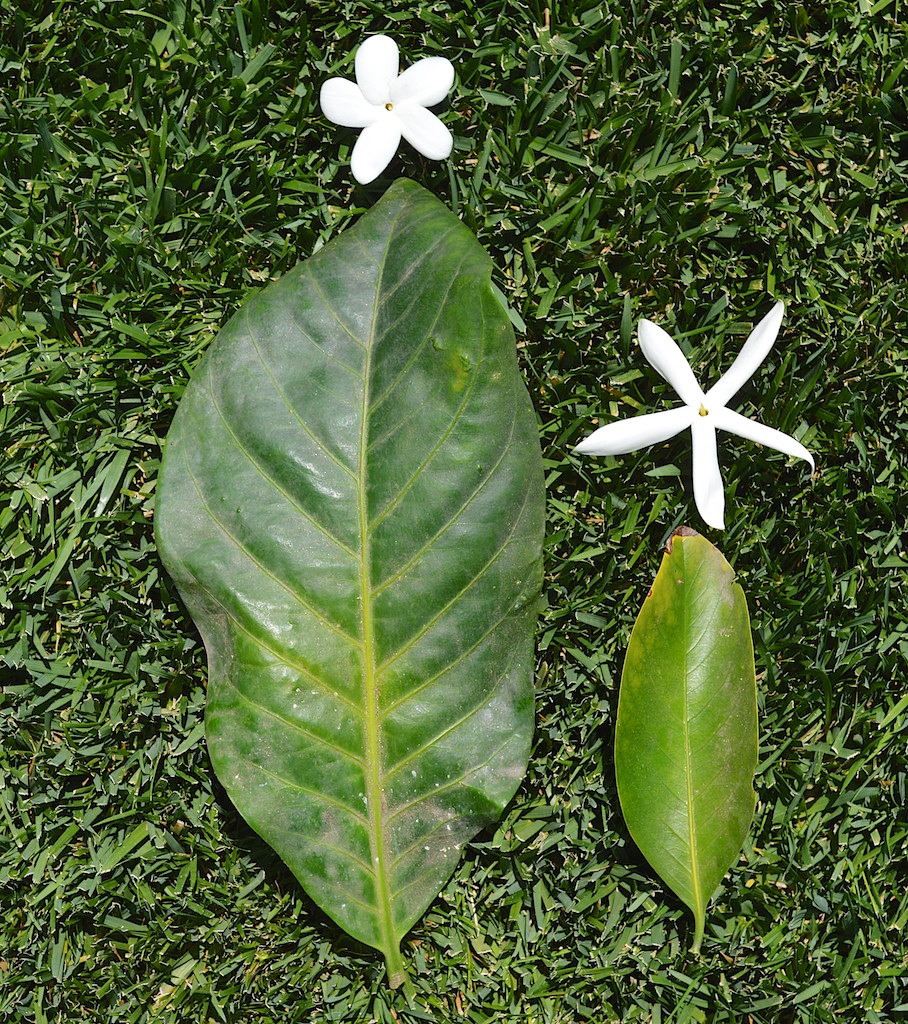 Both plants have been fun to grow and make for an excellent addition to a Mediterranean climate garden. They have seen near freezing temperatures without any damage, but the actual level of cold tolerance won’t be known until they see their first frost or a freeze someday. They both luxuriate in a mostly sunny location. However, once the low winter sun hits the larger-leafed Atractocarpus bracteatus, it does burn. Even though both plants have been flowering for the last couple of years now, neither have set viable seed. Hopefully soon I can get some seed so I can distribute it to make these plants more readily available.