Over the last few years I have become an admirer of the smaller growing Agaves. When most people think Agave the first plant to come to mind is likely Agave americana (Century Plant). The Century Plant can grow to have a spread of 8 feet; it suckers profusely, and in certain soils can spread with long runners. All three things I don’t care for in a plant in my garden. I guess I am not alone, because each year more and more smaller species and varieties of Agaves are popping up at nurseries. These “Boutique” Agaves usually stay under 2 to 3 feet wide, and most do not send long runners that can take over parts of your garden. Mix in hybridizing and tissue culture and you get quite a few new options each year to keep things fresh.

Most people who collect the various boutique agaves like to keep them in pots, which the plants are perfect for. I prefer to have my plants in the ground, so even my boutique agaves are planted around my yard. In one area of my yard I have fourteen in a smaller agave planter bed. But something about the planting just wasn’t working for me. 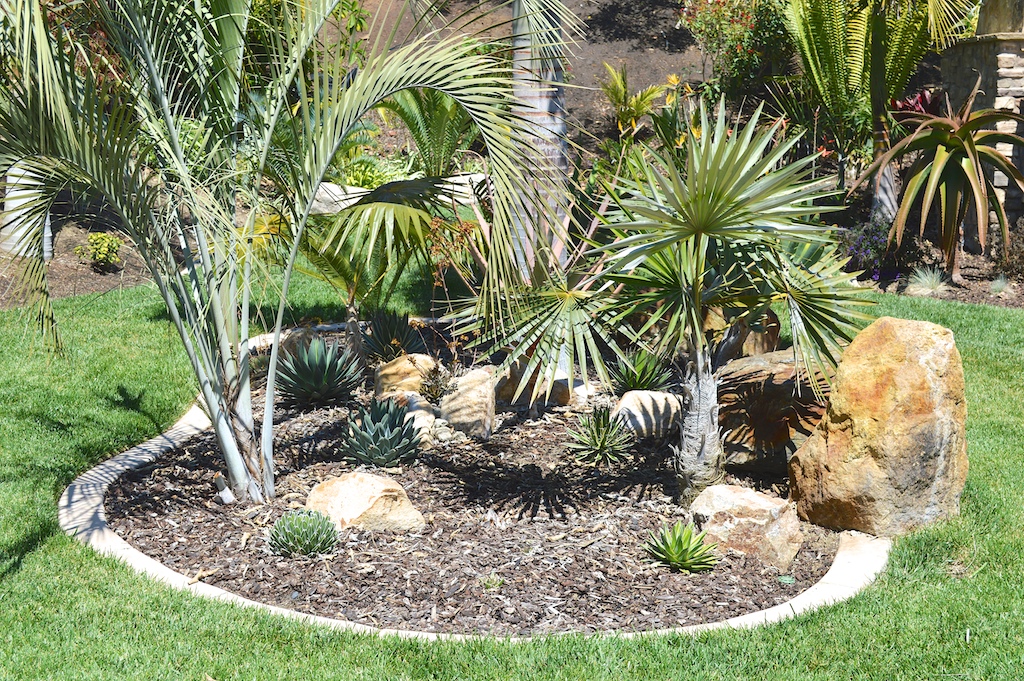 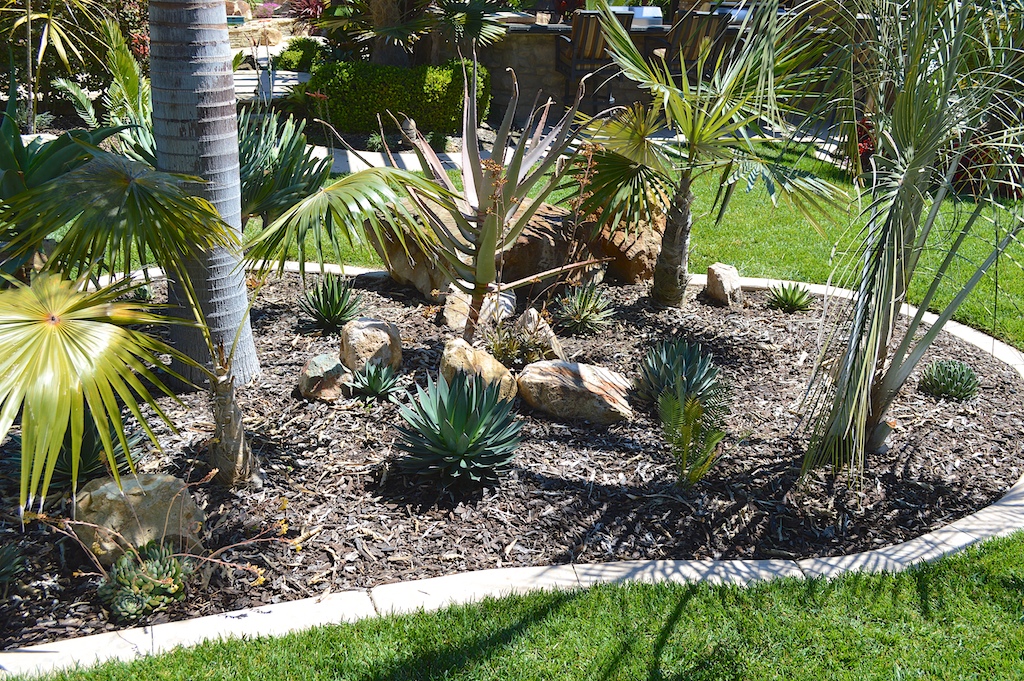 Having visited a few gardens lately in which the gardener used stones mixed with rock mulch really got my creative juices flowing. It was time for a change. First step was to get rid of all the old mulch in the agave planter bed. 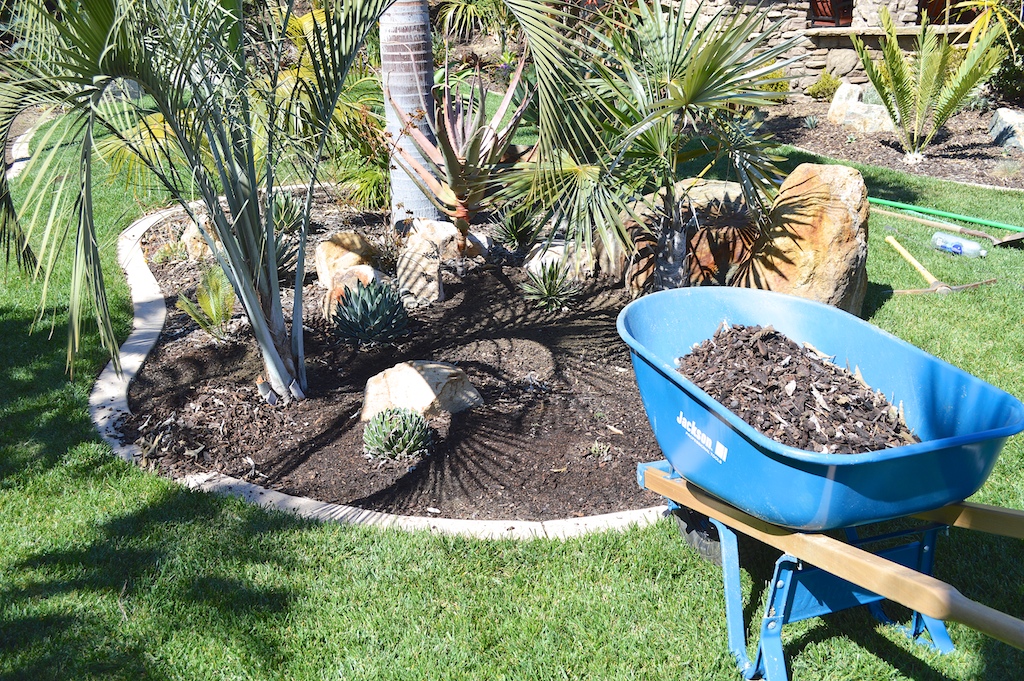 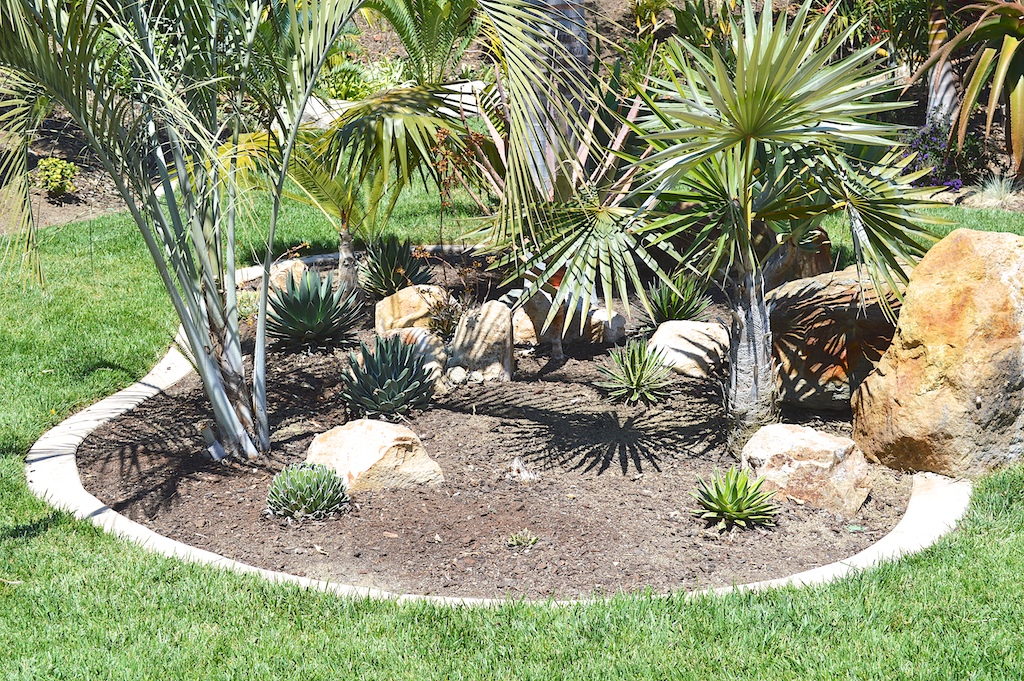 The next step was to take a break and head out to get what I would need to pimp out the new planter bed. First stop was to the closest rock yard to my house—Modern Builders in San Marcos. 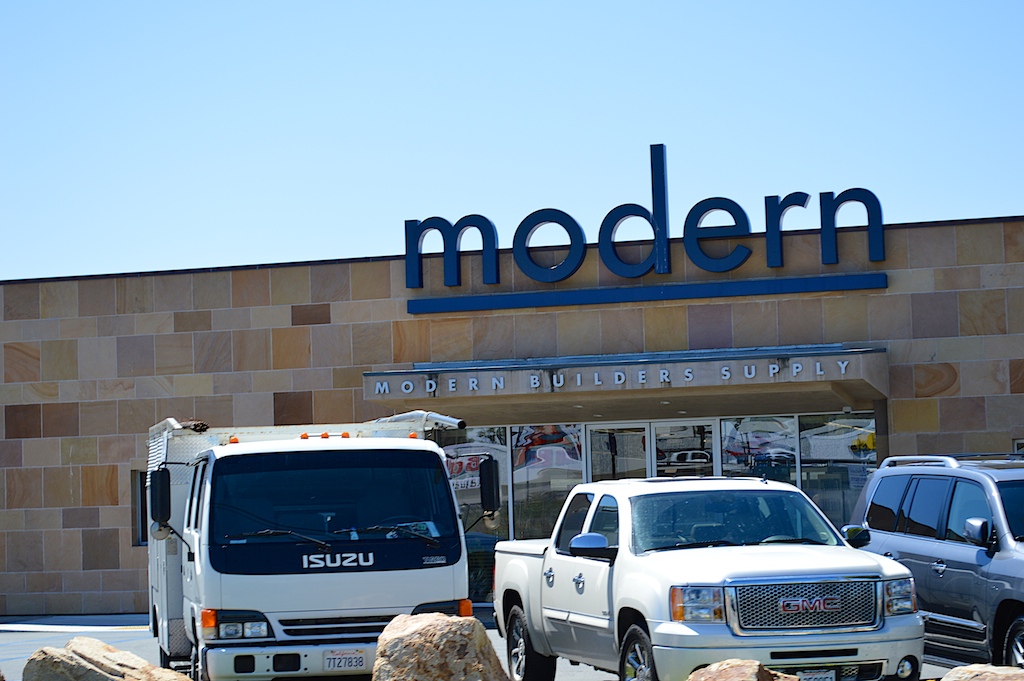 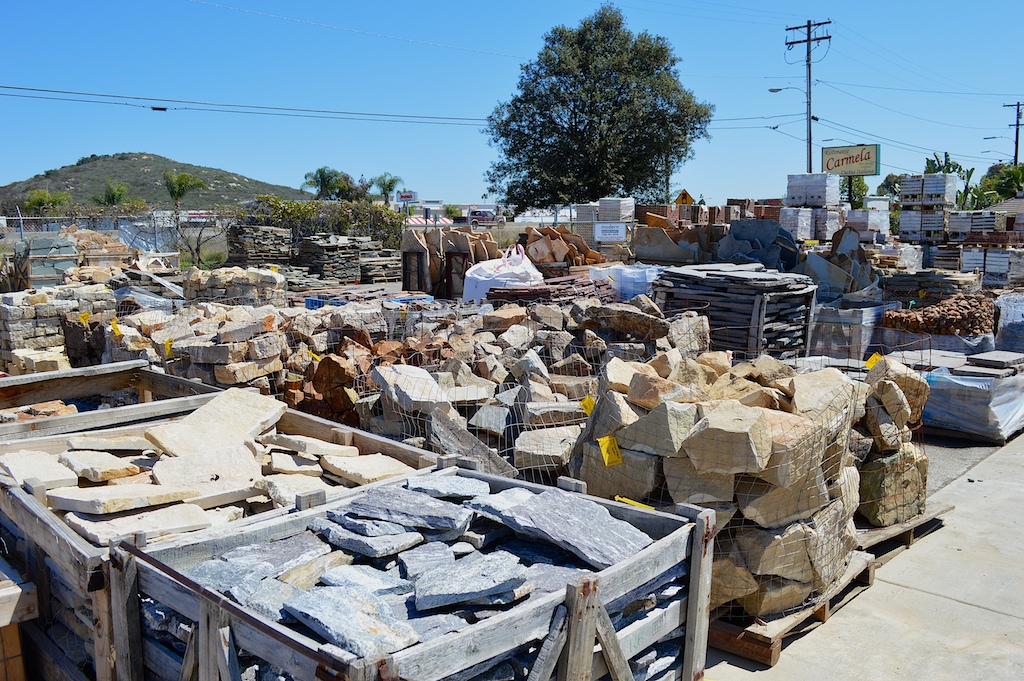 The next stop I needed to make would have been to Southwest Boulder and Stone. However, I really wasn’t motivated enough to drive out to Rainbow, CA for their great selection of small rock and pebble. Chance would have it one of my favorite garden centers carried what I needed from them. I should have known, since Green Thumb Nursery in San Marcos carries pretty much everything I need to maintain my garden anyway. Not to mention they also have a great selection of plants, not just the common landscape stuff most places carry.

So what was on the shopping list? Four different things. Some rubble and three different types of small rock to be used as the mulch. 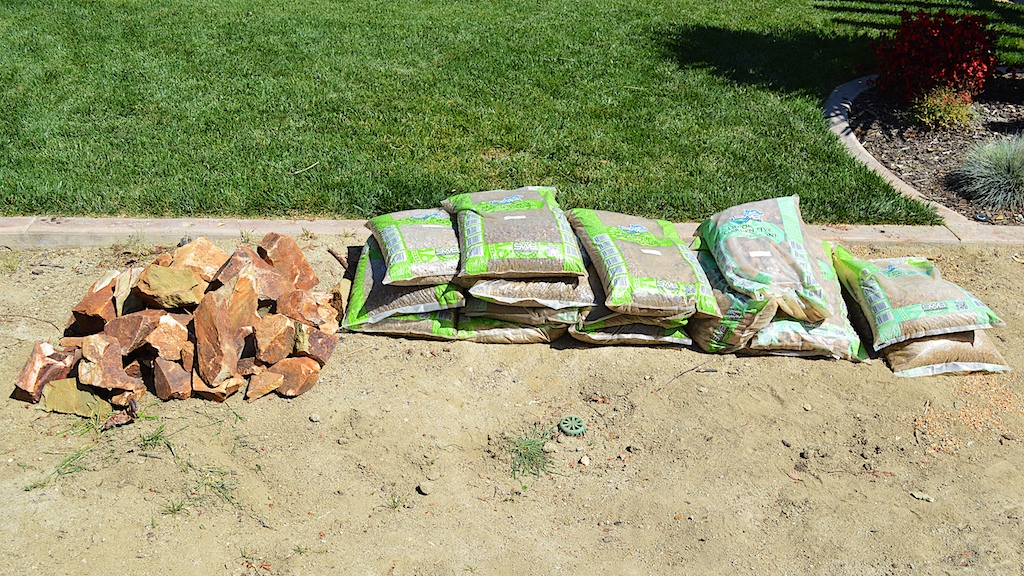 From Modern Builders I bought 250 pounds of “Baja Cresta” rubble. I really like the multiple shades of brown this stone has. 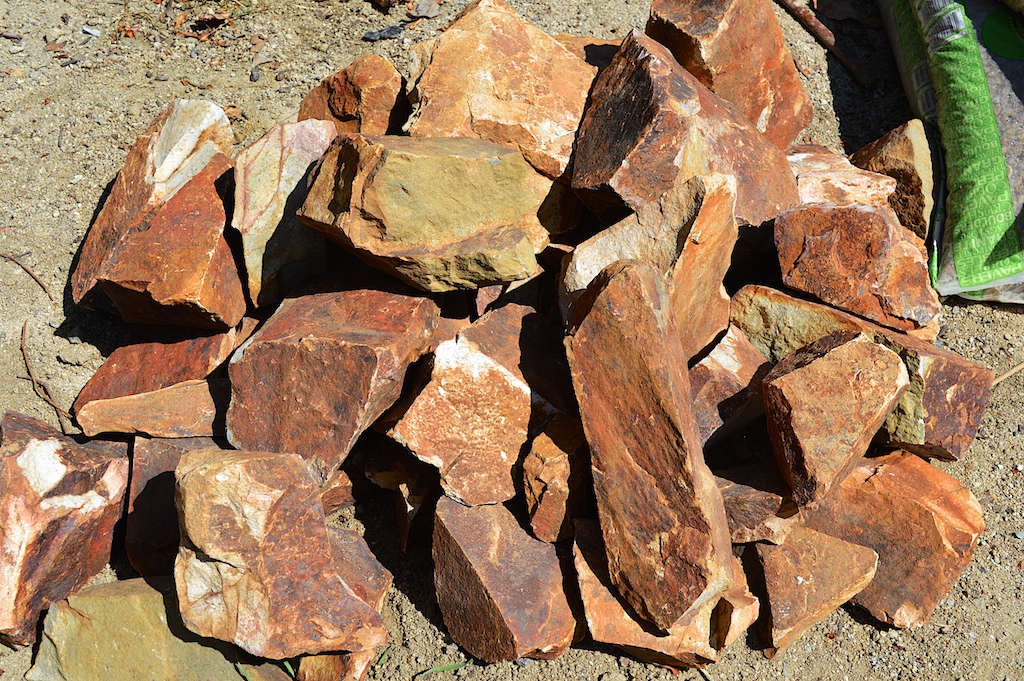 From Green Thumb I picked up four bags of Southwest Boulder and Stone’s crushed “Apache Brown” in 3/4 inch size. 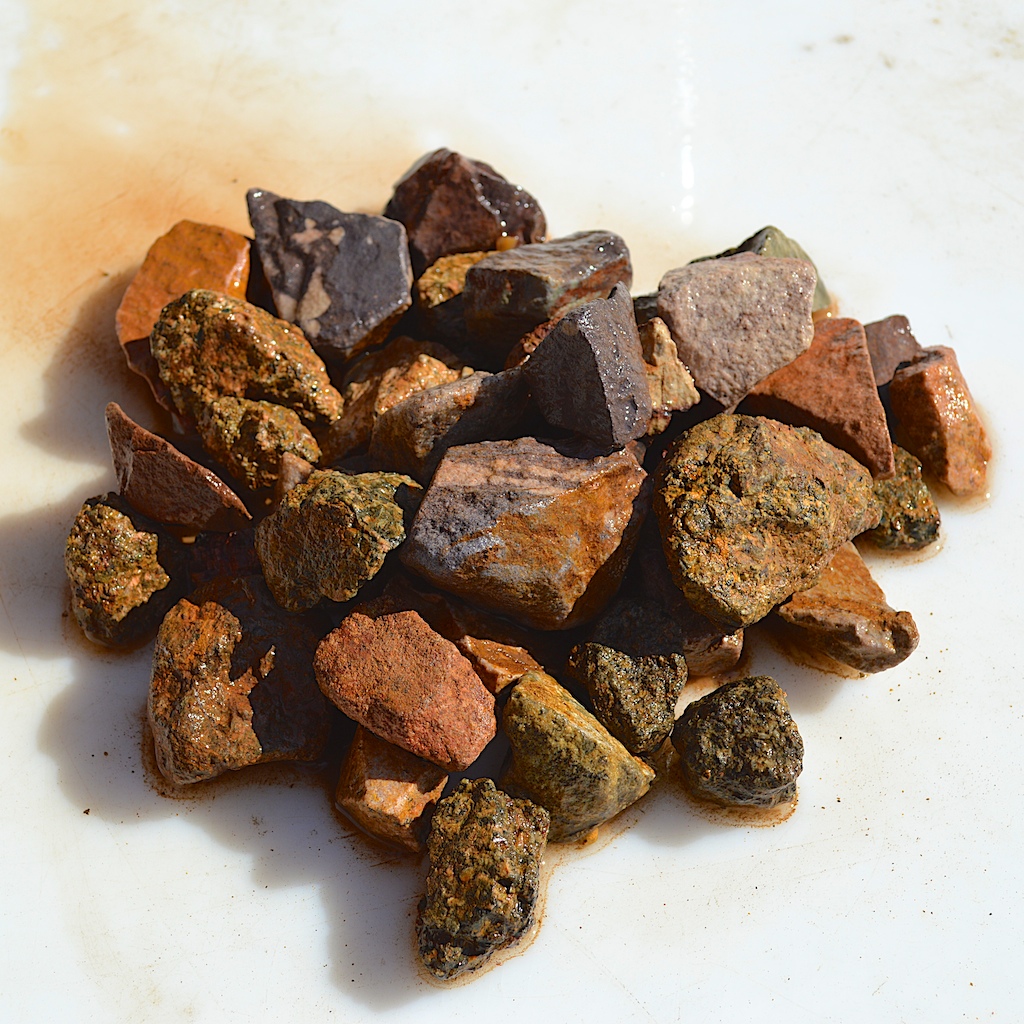 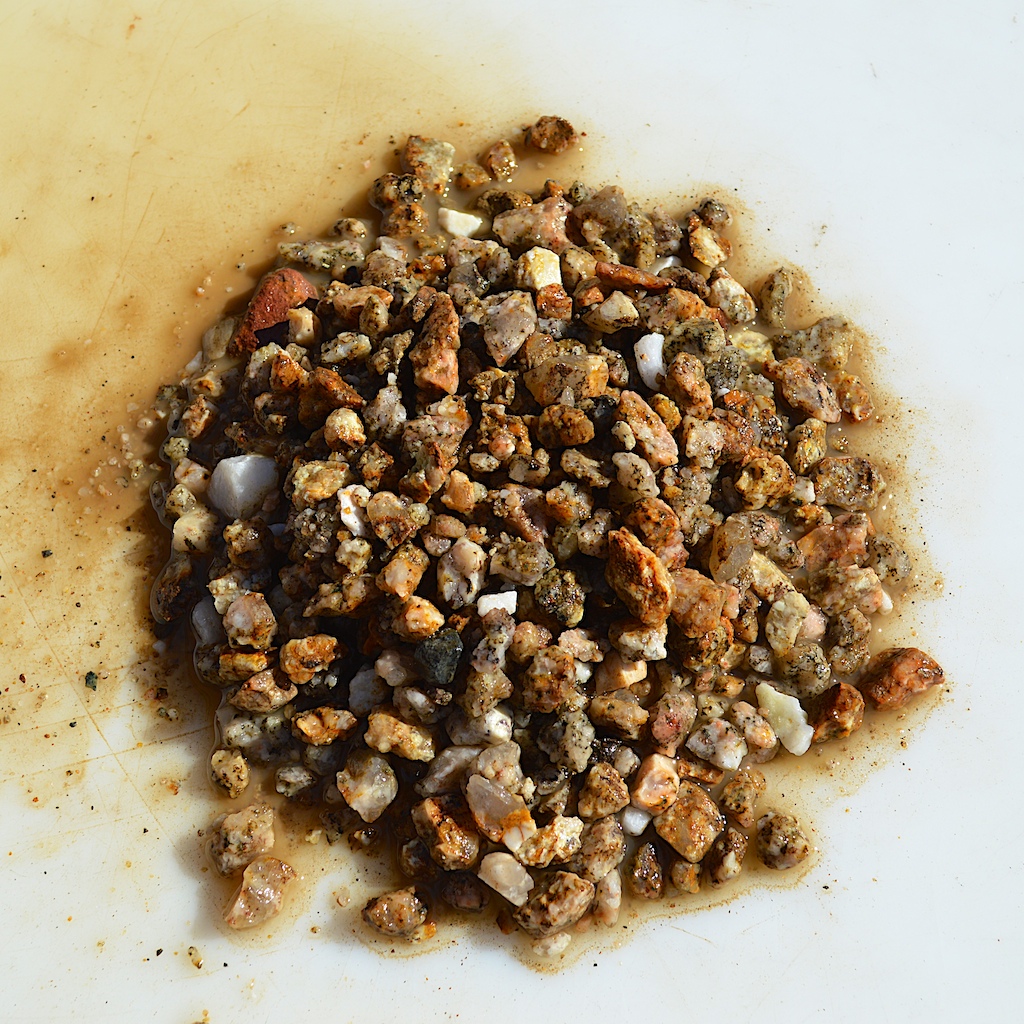 The last selection made was four bags of Southwest Boulder and Stone’s “Parchment Pebble” product. This is a really pretty pebble with an almost translucent hue that I figured would make for a great filler. 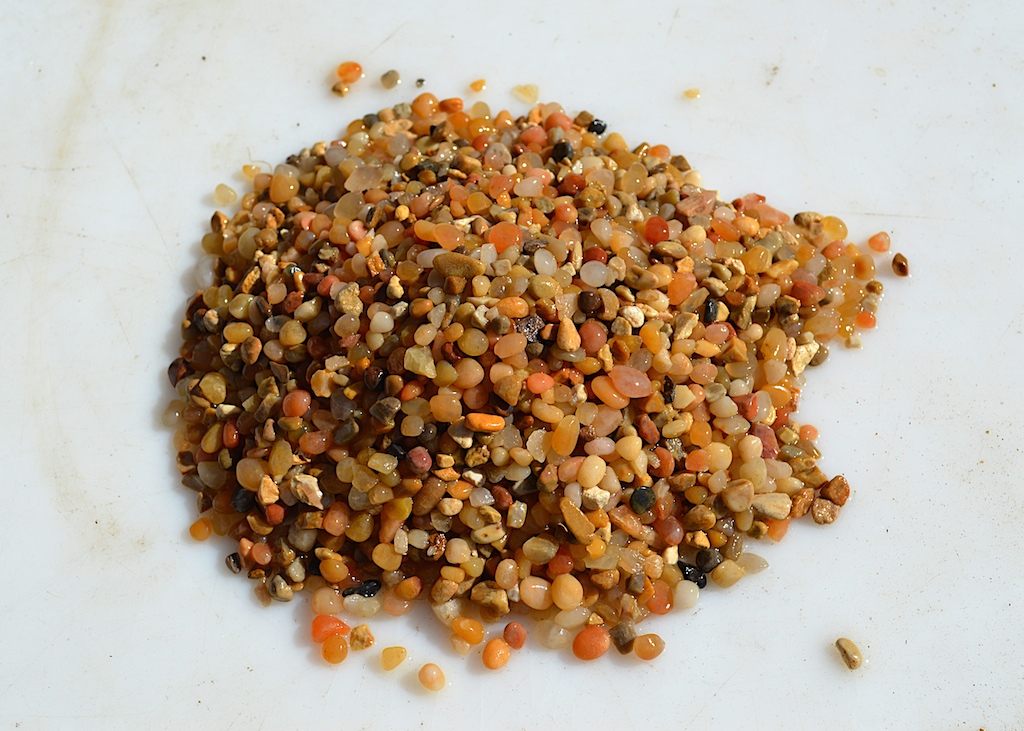 With all the materials purchased, it was time to place everything. I wanted to make it look as natural as possible. I much prefer to make the beds look more like something you might find in nature rather then go for some “artistic” approach. But to each their own.

The first step was to take advantage of the larger boulders and rocks that were in the agave planter bed prior. With the larger stuff in place I simply needed to gradually shrink the stone size out from the boulders. This is where the Baja Cresta rubble and 3/4-inch crush Apache Brown came in. 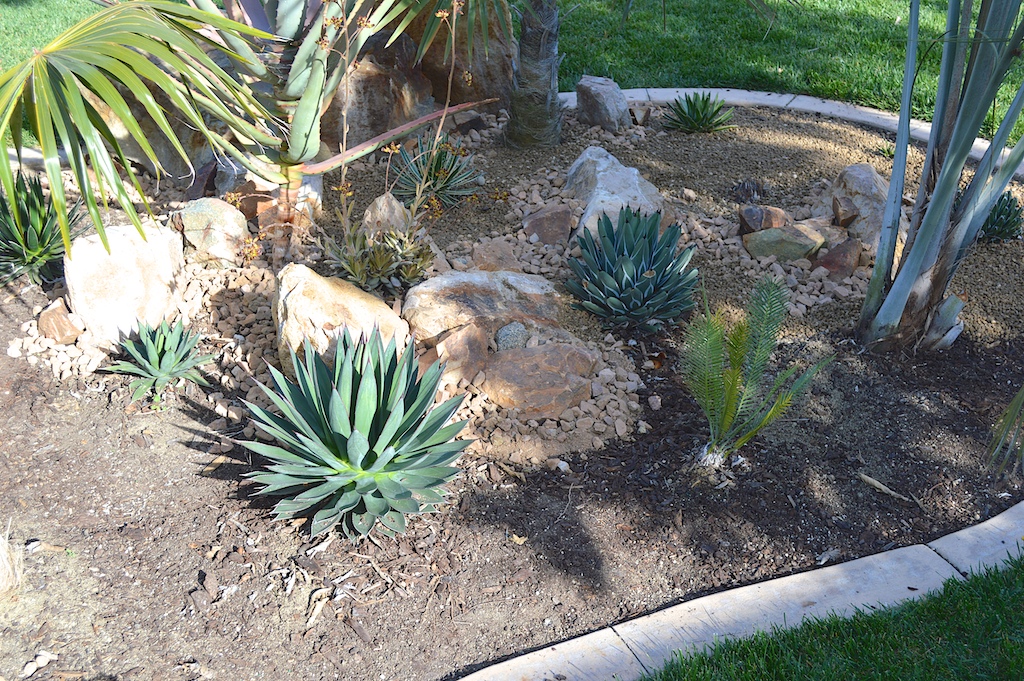 The next step was to add the 3/8-inch crushed Mohave Gold to the rest of the agave planter bed and use it as the primary base layer. 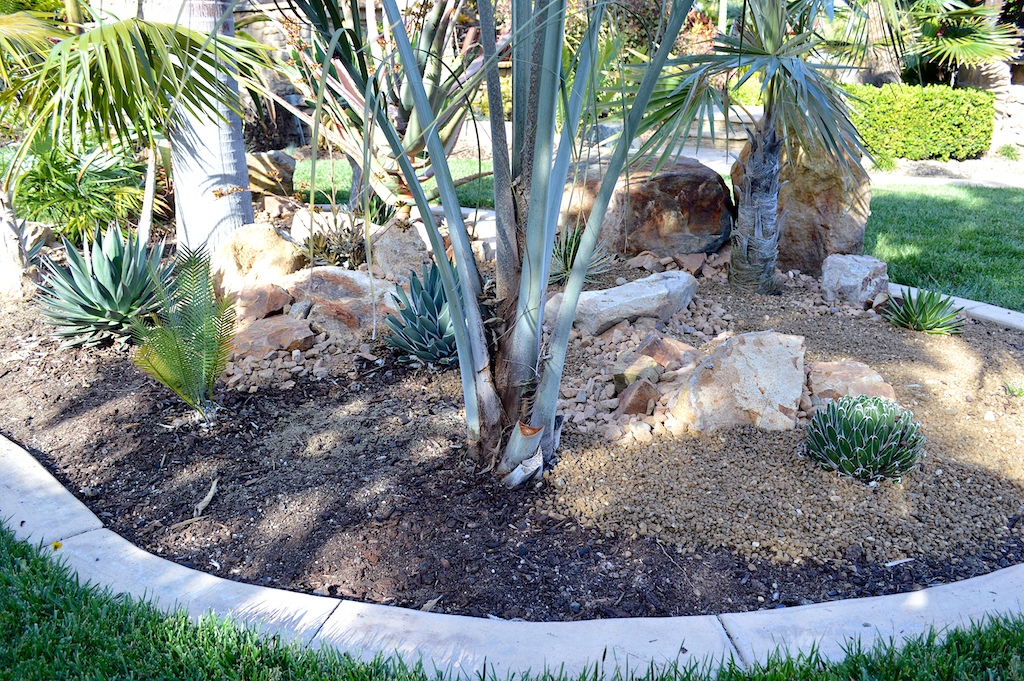 Once all the Mohave Gold was laid out I could polish off the look by adding the Parchment Pebble to fill in gaps and to act as a scattered top layer over the Mohave Gold. 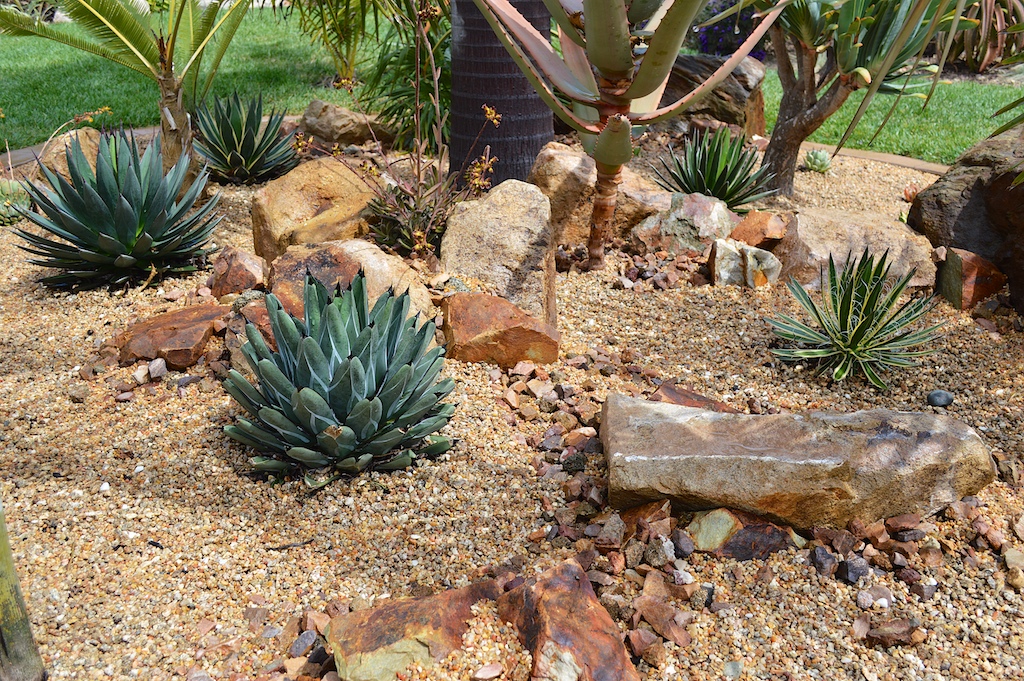 The end result was a completely different looking planter bed that really made my agaves and other plants stand out. Something the shredded fir bark mulch just did not do in my opinion. 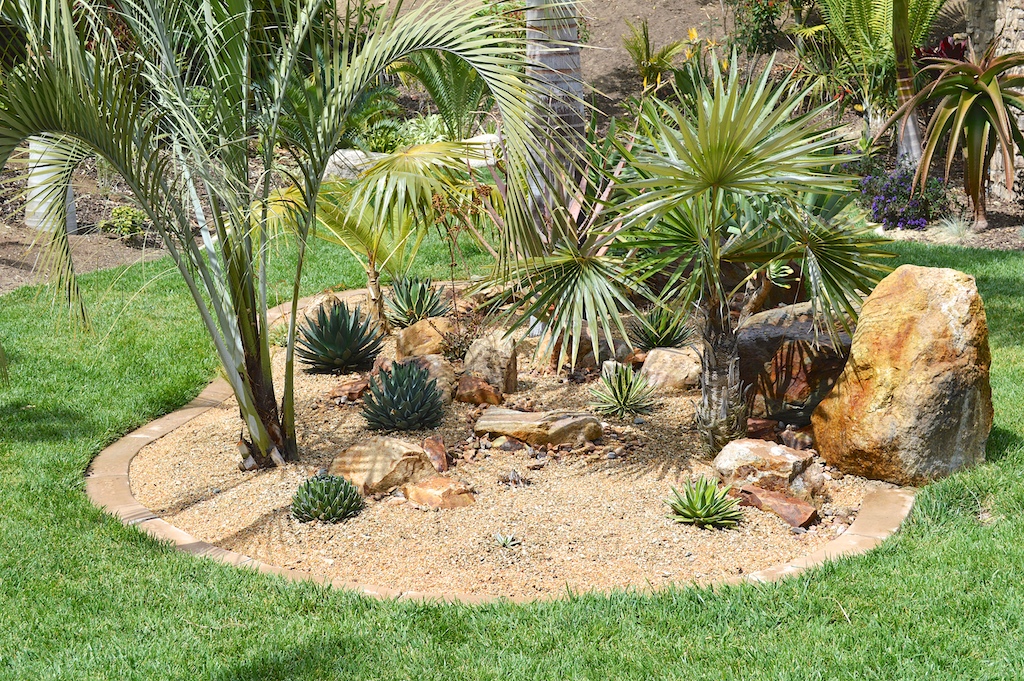 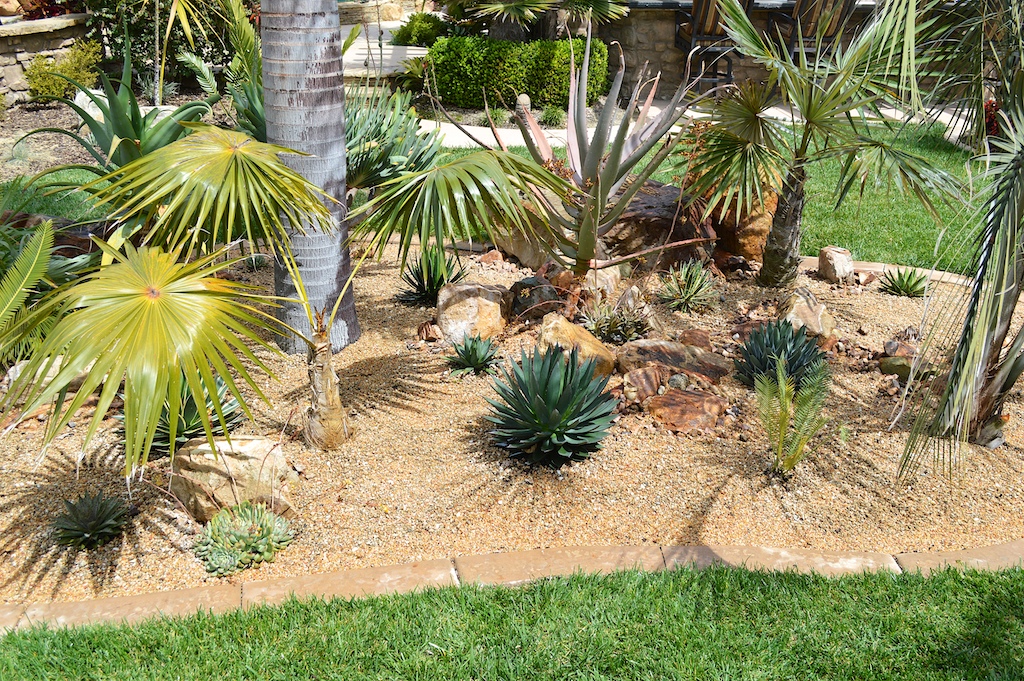 The colors in my variegated Agave “Blue Glow” and my xMangave ‘Bloodspot’ (Japanese-created hybrid of Agave macroacantha and an unknown manfred a species) really stand out now. 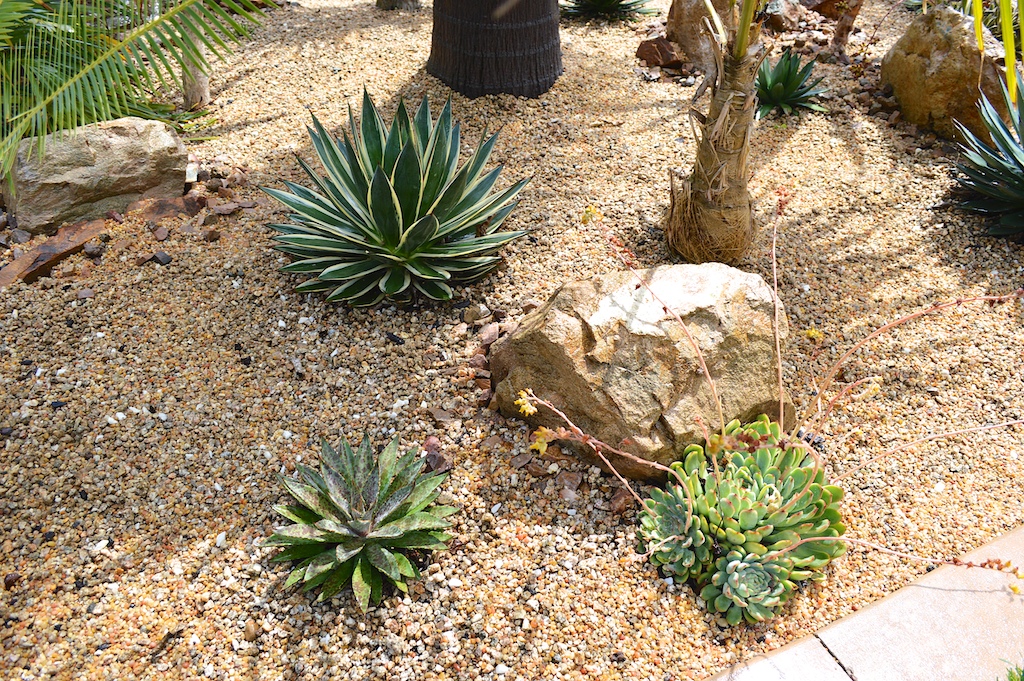 In the front is Agave “Blue Ember,” to the right is Agave nickelsiae. The yellow-and-green agave in the back center is Agave filifera ssp. schidigera ‘Shira ito no Ohi’ (yeah, it’s a tongue twister). 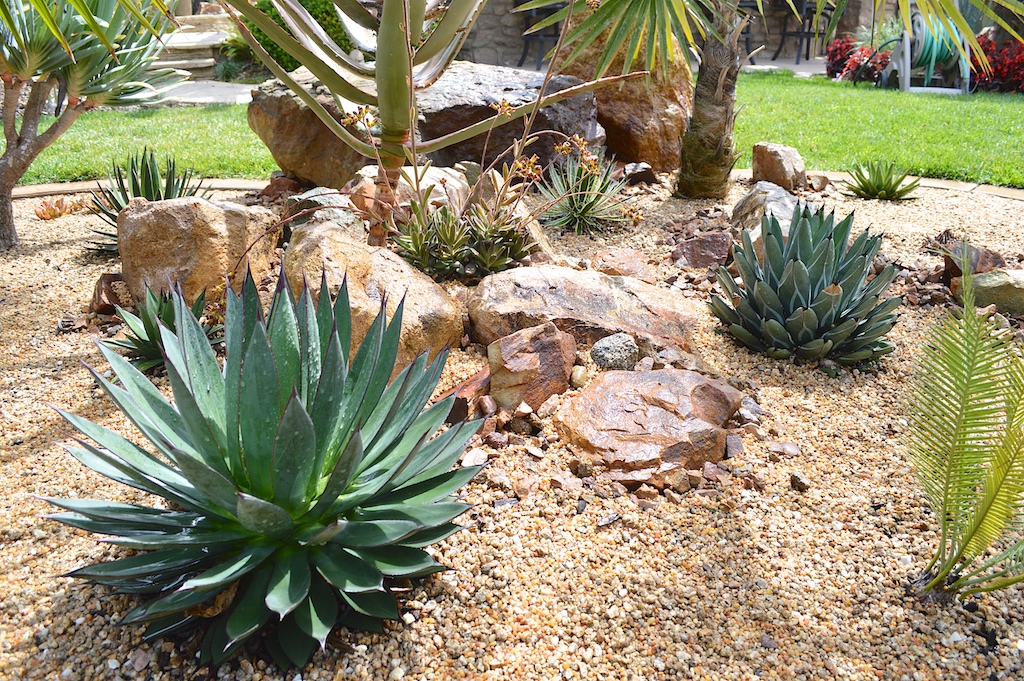 Here is another view of some of the plants listed above. Not labeled before is my Agave ocahui in the back right. This is a very under-utilized small agave in the garden, by the way. You can also see a cycad caudex in the bottom right. This is my Dioon califanoi. Many Dioons and Agaves can be found in the same habitats in Mexico. So they make the perfect companions. 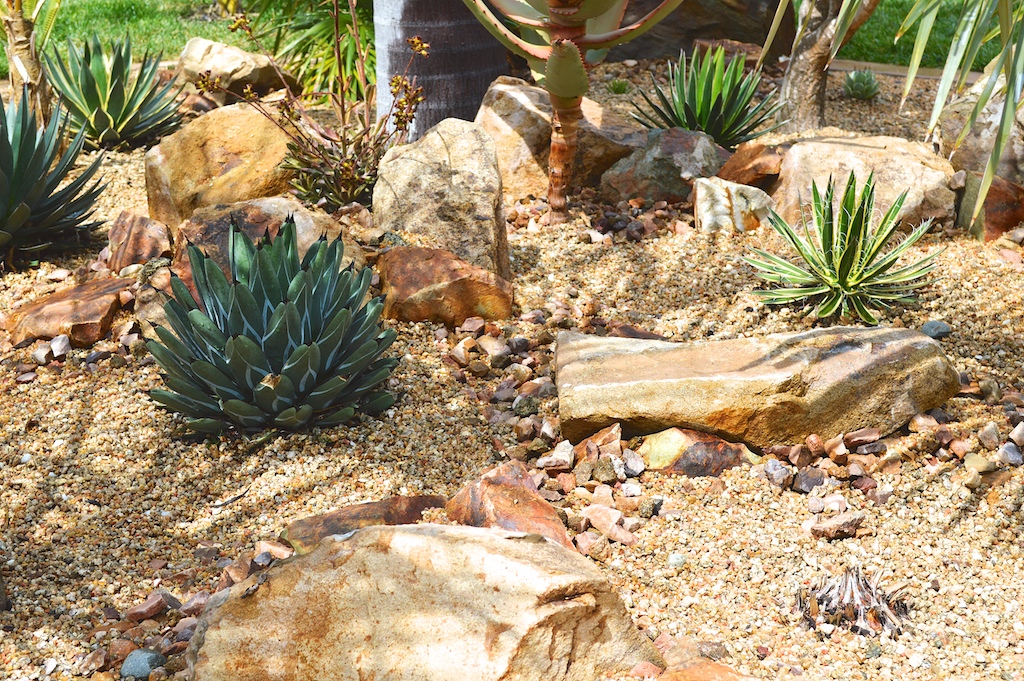 This final view shows my Coccothrinax ‘Azul’ to the left (an attractive palm from Cuba with very metallic white undersides). It also shows an Aloe divaricata in the center and an Aloe plicatilis to the far right. The small Agave at the bottom of the goto is Agave “Desert Diamond.” 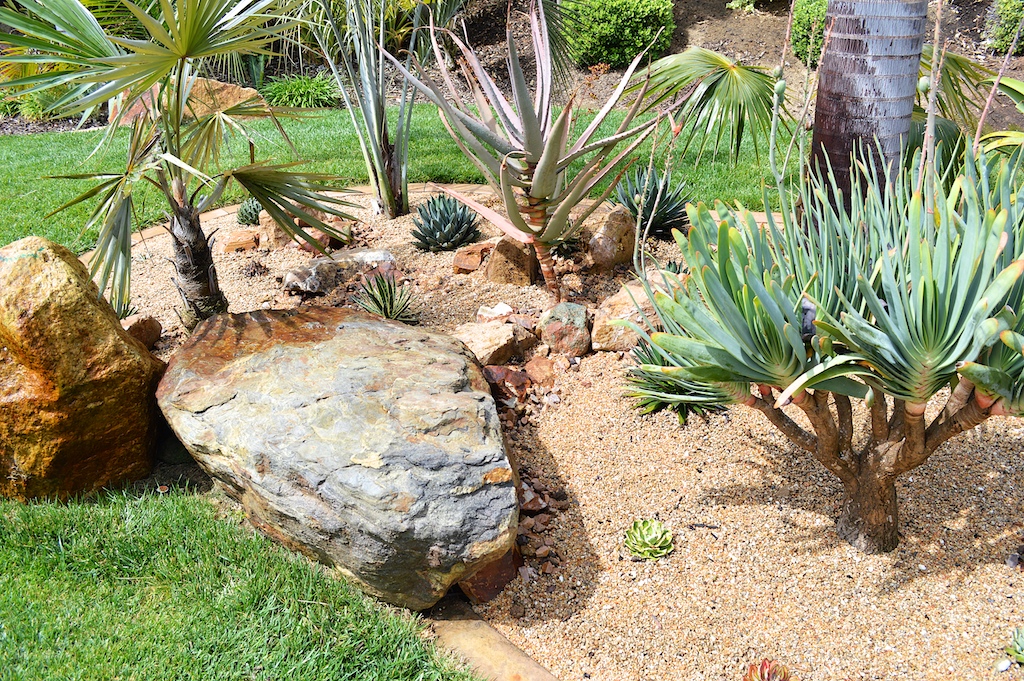 The agave planter bed has, all totaled, 14 agaves, 3 dioons, 3 aloes, 4 palm trees, 3 echeverias, and 1 kalanchoe thrown in for good measure.

Here’s a side-by-side comparison of the before and after. What do you guys think? Big improvement? Is there anything you would do differently? 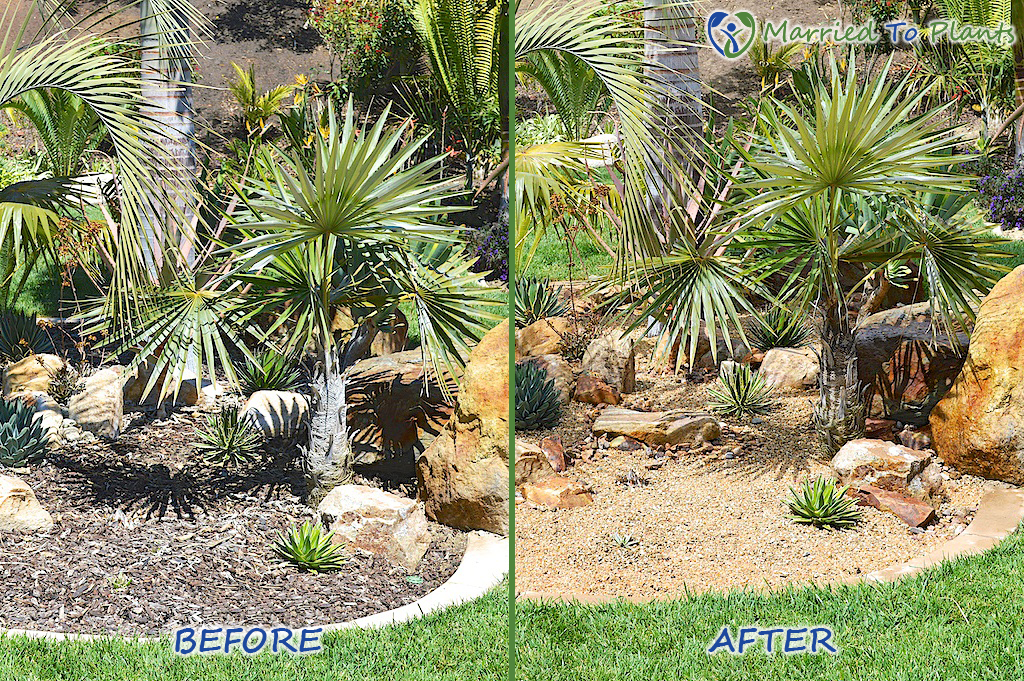