Back on August 25th, 2015, famed plantsmen and palm tree growing legend Mardy Darian passed away at 82 years young. I first met Mardy in 2008 when I went with a few friends to tour his Vista, California, garden. In an effort to limit visitors and to generate some income to assist with his water bill, Mardy would charge a $150 entrance fee. I never would have considered paying for entrance into a private garden, but many people told me it was well worth it. Of course it didn’t disappoint when I finally did pay and visit. After that visit, Mardy and I struck up a friendship. I would take every opportunity to spend time in his garden over the next 7 years. As he advanced in age and suffered a few medical setbacks, his memory started to deteriorate. Phone calls went from growing advice, where to source rare palms and travel stories, to “What is that palm up by my pool house next to the cycads?” A man who, when I first met him, could bang out every plant by genus/species in his garden, could no longer remember what his Foxtail Palms were called. While his body grew weaker and his mind started to fade, his passion for palms never did decline. He planted palms as though he would live forever. 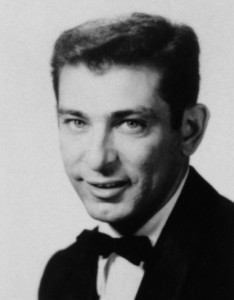 Mardy Darian graduated from the UC Davis Veterinary Medicine class of 1959. It wasn’t long after that he would begin his quest to locate an ideal property to build his dream garden. In 1964, after a major freeze event, while driving around, he saw a hill in Vista that had avocados on it that had not been burnt from frost. He bought 3.2 acres on that hill. Many sticks of dynamite later, his garden began to take shape. Travels would soon follow to source plants for his new found passion.

Mardy’s wife Cheri had his celebration of life at his garden on October 24, 2015. I was unable to attend, as I was in Madagascar at the International Palm Society’s annual Board of Directors meeting. It was a fitting and ironic twist, as it was a country he visited eleven times over the decades. It was a country that he would become bound to in the plant world. No one could think of Mardy Darian without connecting him to Madagascar. His exploits to gather palm seed are legendary there. From crossing crocodile-infested waters to being thrown in jail for walking by a hidden bunker at the Antananarivio airport. Mardy was a man that brought more awareness to Madagascar than anyone before him. He created what was known in Southern California palm circles as the “Dypsis Disciples.” He converted me. Mardy and his guides made many discoveries over the decades. He brought many of the discoveries to cultivation for the first time as well. He even has a palm tree named after him – Marojejya darianii.

My very own garden is but a stone’s throw from Mardy’s. I could simply walk out my front door and stare up at his rainforest masterpiece any time I chose. Mardy would always preach that “rain forests do two things for the planet. They stimulate rainfall and they remove carbon.” To give you an idea of just how prominent his rainforest was in our concrete jungle ecosystem, one simply needs to see it from Google Earth.

With impeccable timing, Mardy and Cherie offered the general public one last chance to see the over 50-year-old garden. The PSSC’s July meeting at the Darian garden came almost one month before his death. While not the best photo, as I am not even looking at the camera, it would be the last I would have with the two of us together. Weak, he still managed to show people around his garden that rainy July afternoon. 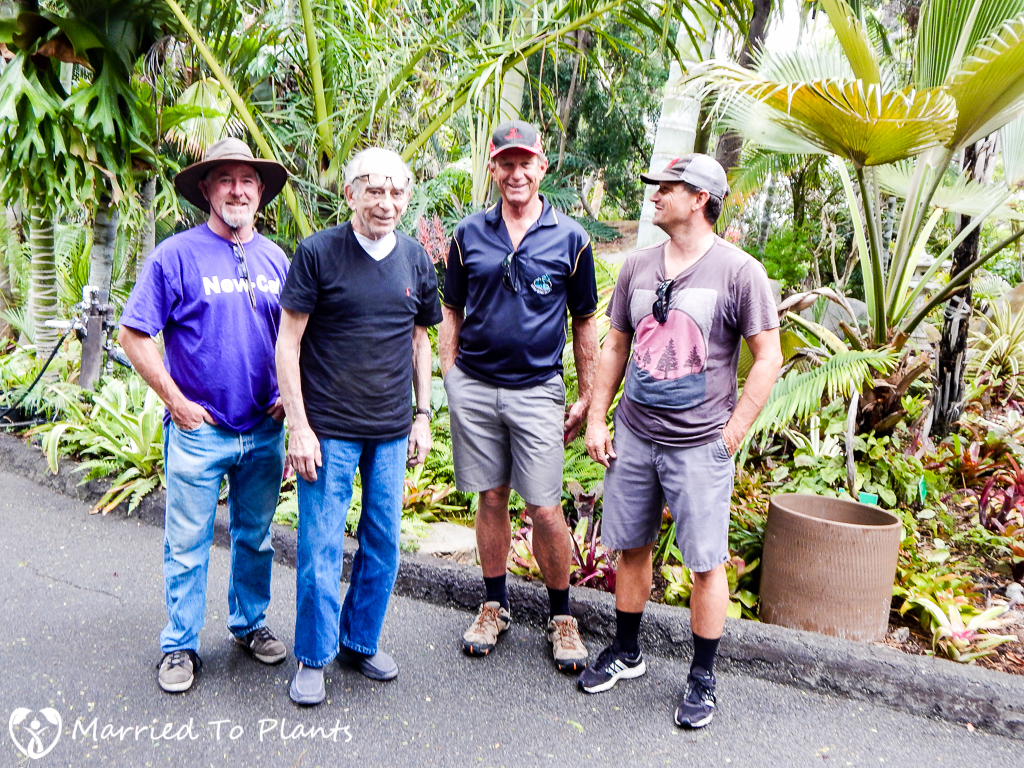 At that last PSSC meeting at Mardy’s garden, people had one last chance to view some historical palms in all their glory. This included one of the more famous palms in his collection, his Mealy Bug Palm (Dypsis mananjarensis). In 1997 it was still just a baby but Mardy would show it with pride.

Today it is a flowering adult that misses the attention it would get while Mardy was alive. It isn’t looking so hot now, only holding a few healthy leaves. 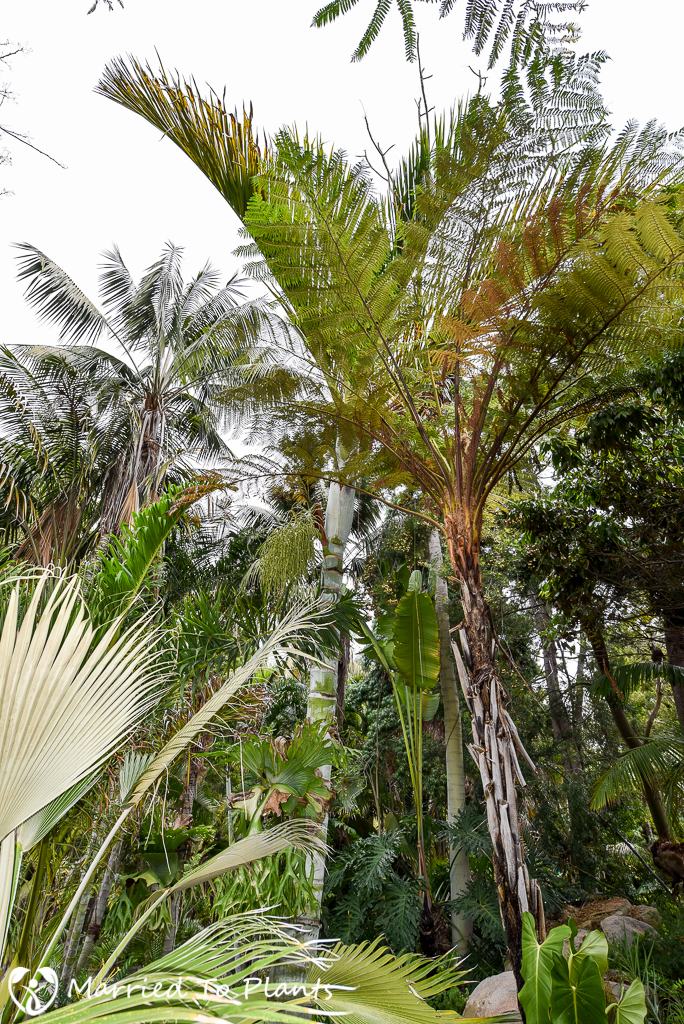 While my passion for the plants and their upkeep in my garden is intense, I freely admit it could never rival Mardy’s almost inhuman vigor. It was infectious. Each time I brought back a plant from his garden, I knew I was bringing home some of that passion. This past week I had the sad, but honored fortune of bringing back my last plants from his garden. With the help of the Palm and Cycad Exchange, the Darian family put on a three-weekend plant estate sale.

The first two weekends of the sale had quite a few people show up. This last weekend, the numbers were down, as the remaining material had to be dug from the ground. That didn’t stop some eager people from showing up and purchasing legacy plants. Below, the race was on in the driveway to get to the checkout table. Plant purchases were first come, first served. 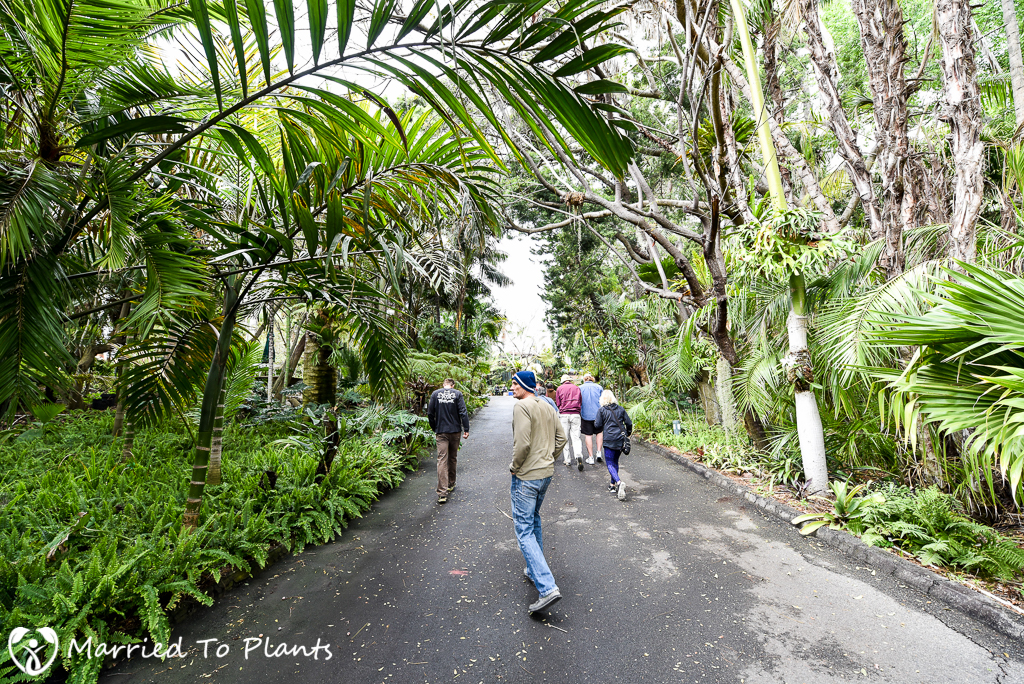 A happy buyer that would end up acquiring many of Mardy’s plants for his garden. 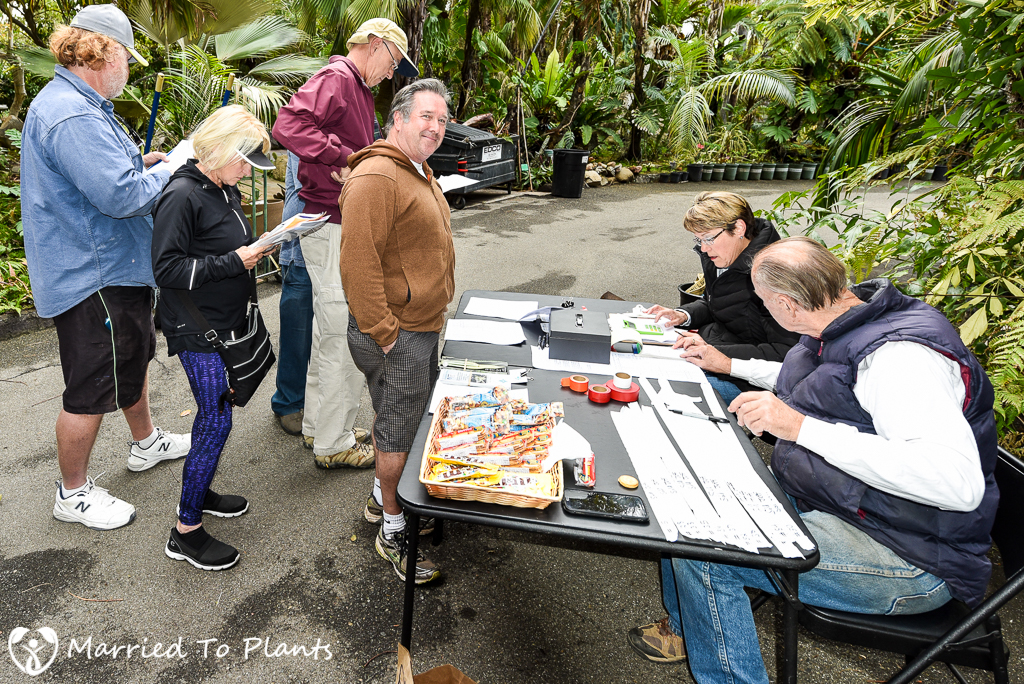 Some people were not afraid to write large checks to acquire some of the older and rarer plant material Mardy once grew. Some plants sold were as old as the garden itself. 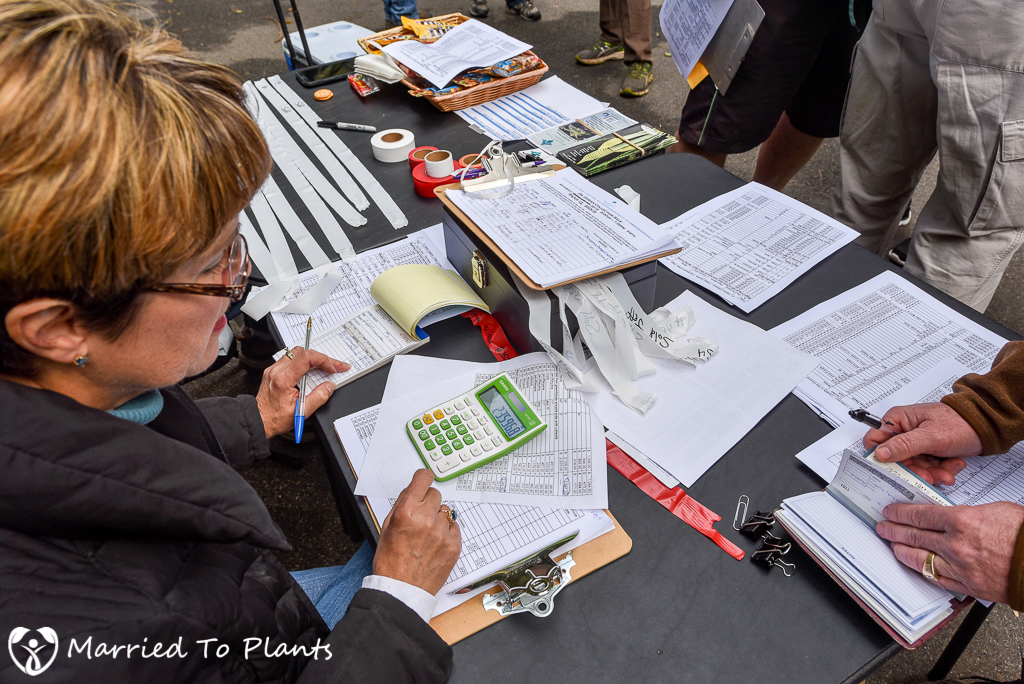 I have been content with the growing up of smaller plants to place in my garden, so my larger plant purchases happen seldom these days. However, some plants in Mardy’s garden were too good to pass up. Good fortune was with me last weekend. I was amazed the three plants I wanted to buy were actually still available.

The first plant I was able to purchase was an aloe. But this was no ordinary aloe. It was an Aloe suzannae and, according to Mardy’s best guess a few years ago, it was over 30 years old. It was a plant he brought back during one of his earlier trips to Madagascar. Aloe suzannae is a slow, truck-forming aloe, so scoring one this big was not something I could pass up. 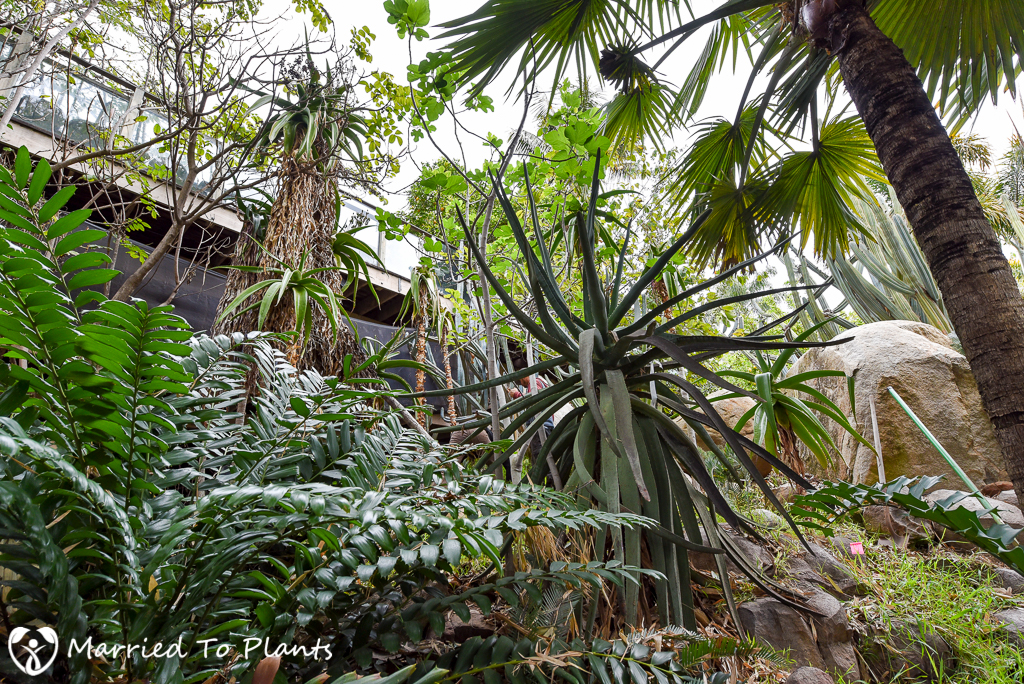 The first step in transplanting the Aloe suzannae was to cut off a bunch of leaves to make it easier to dig and lighten the load. Cleaning up the plant ending up exposing about 4 feet of trunk. 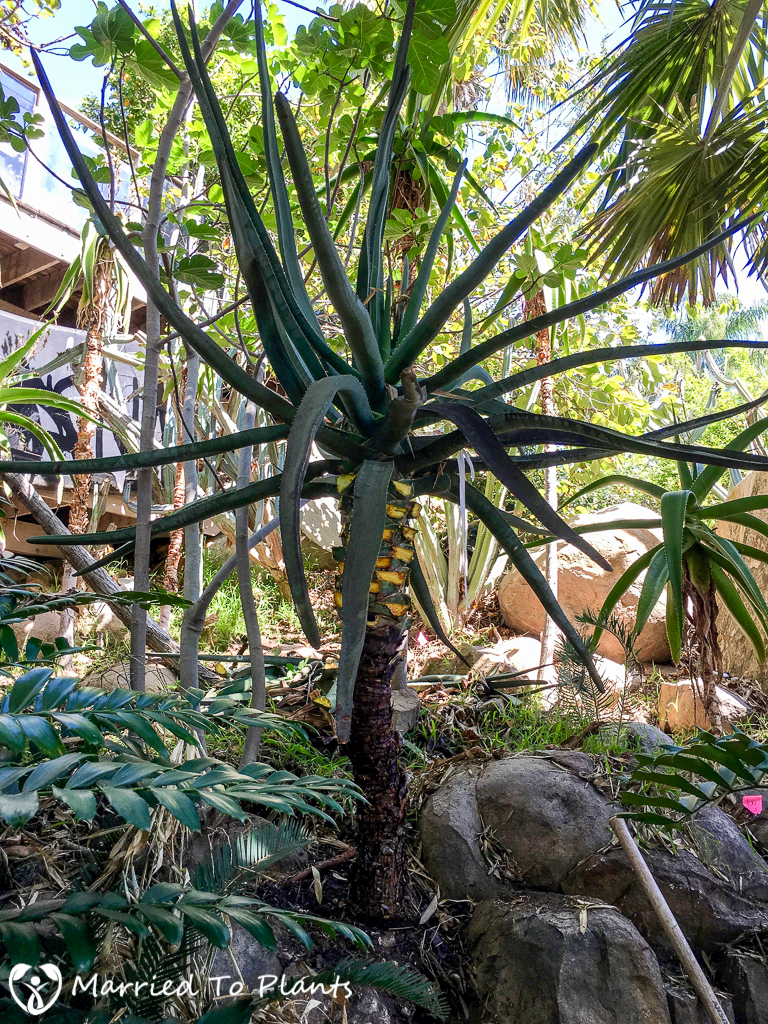 The major challenge in this transplant was trying to dig out a sizable rootball. The aloe was surrounded by rock, which made the dig very difficult. 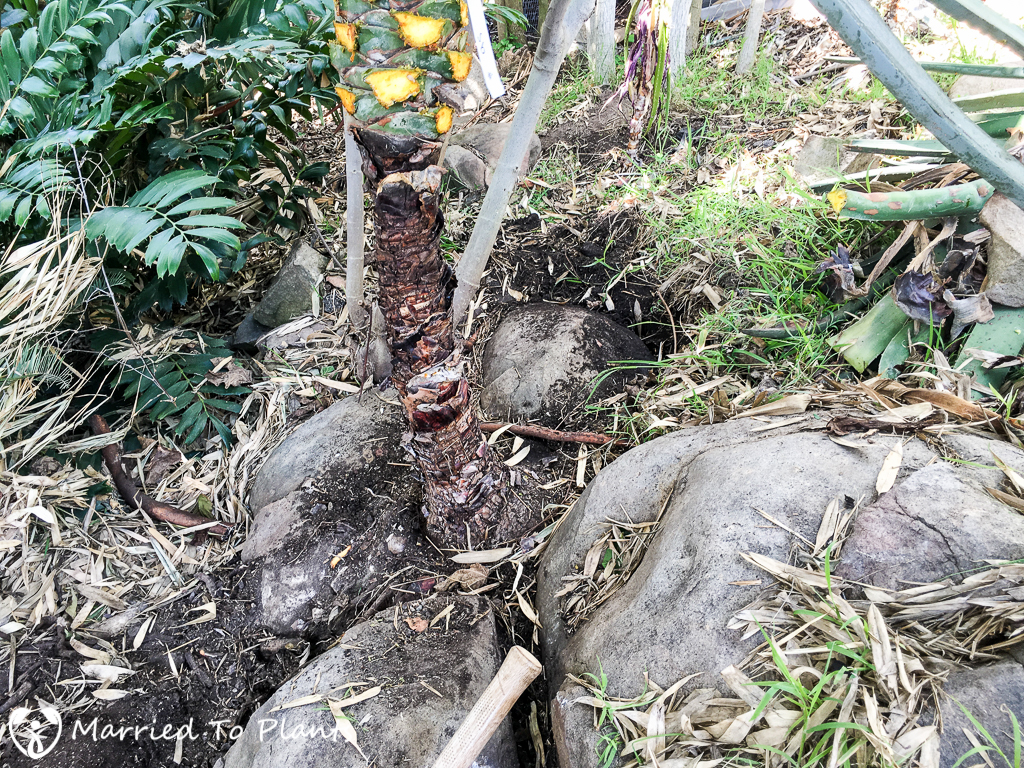 We were able to knock a few rocks out of the way and get about a 2-foot-round rootball. I wanted a much larger rootball but it just wasn’t going to happen. Even with the smaller rootball, the Aloe suzannae should transplant well.

The leaves on Aloe suzannae break easily, so the only way to get it back to my garden safely was to transport it standing up. To do this we had to use a large truck and one guy had to sit in the bed of the truck to hold my newly acquired Aloe suzannae up to prevent it from falling over and damaging the plant. 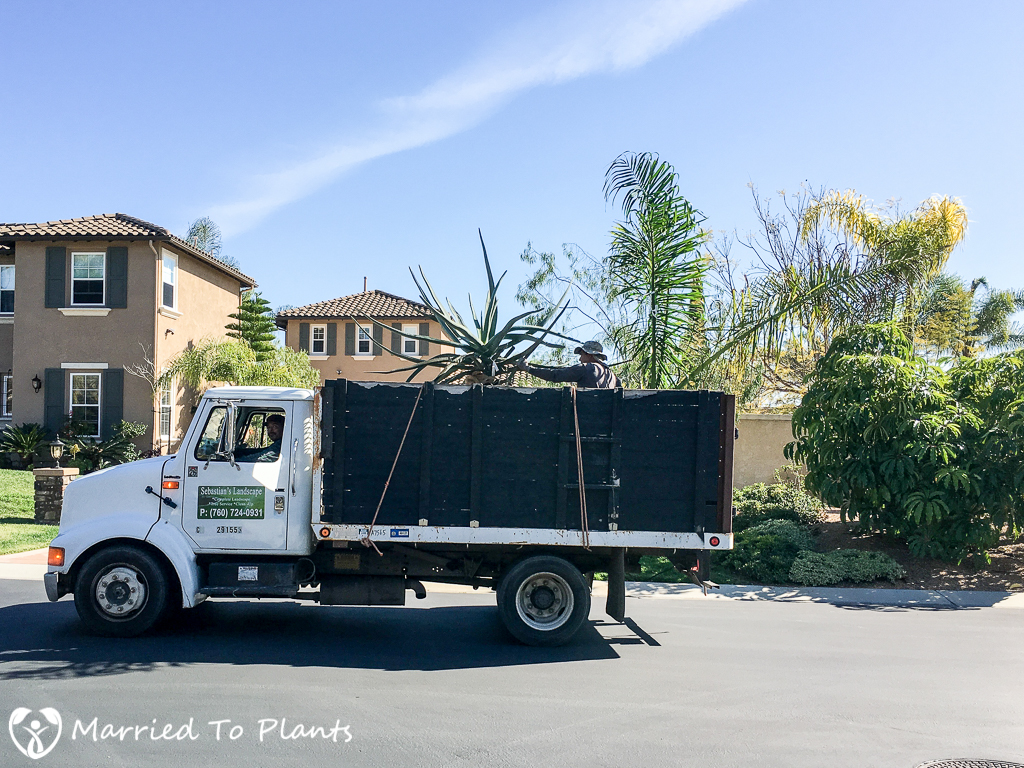 I had already found the perfect place in my yard where the Aloe suzannae was going to go. The small root ball made it an easy planting, and after supporting it with two stakes, she was ready for pictures. 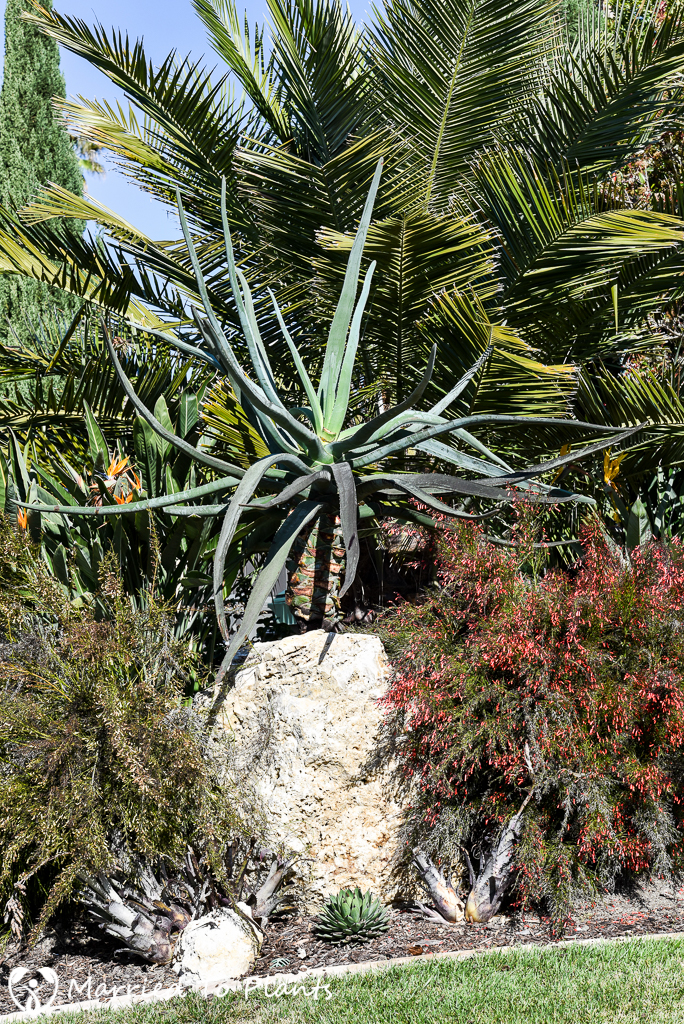 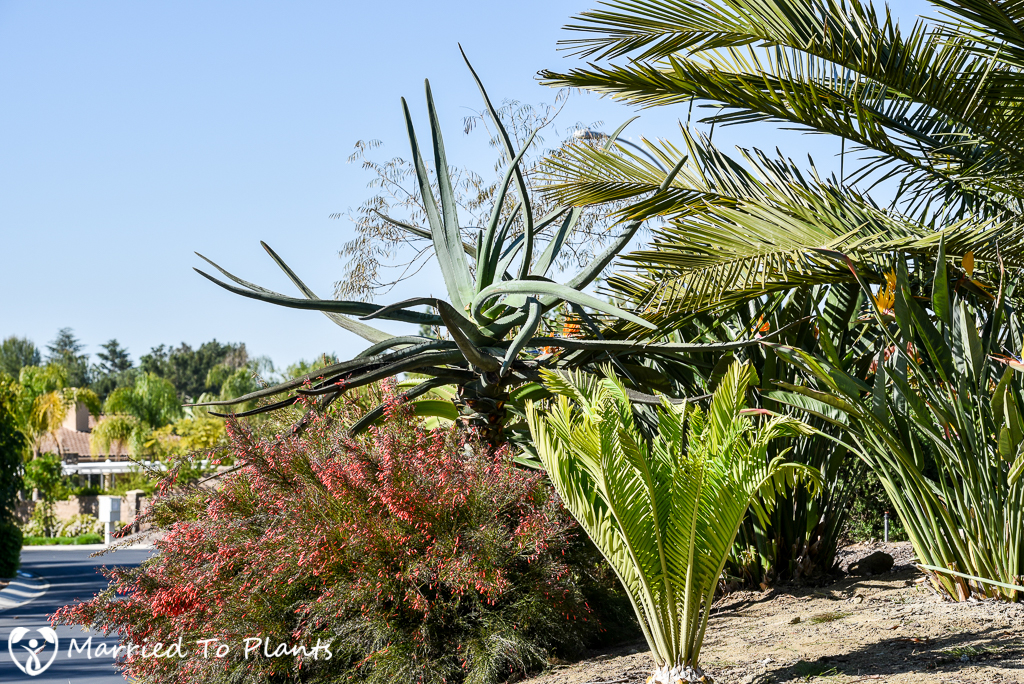 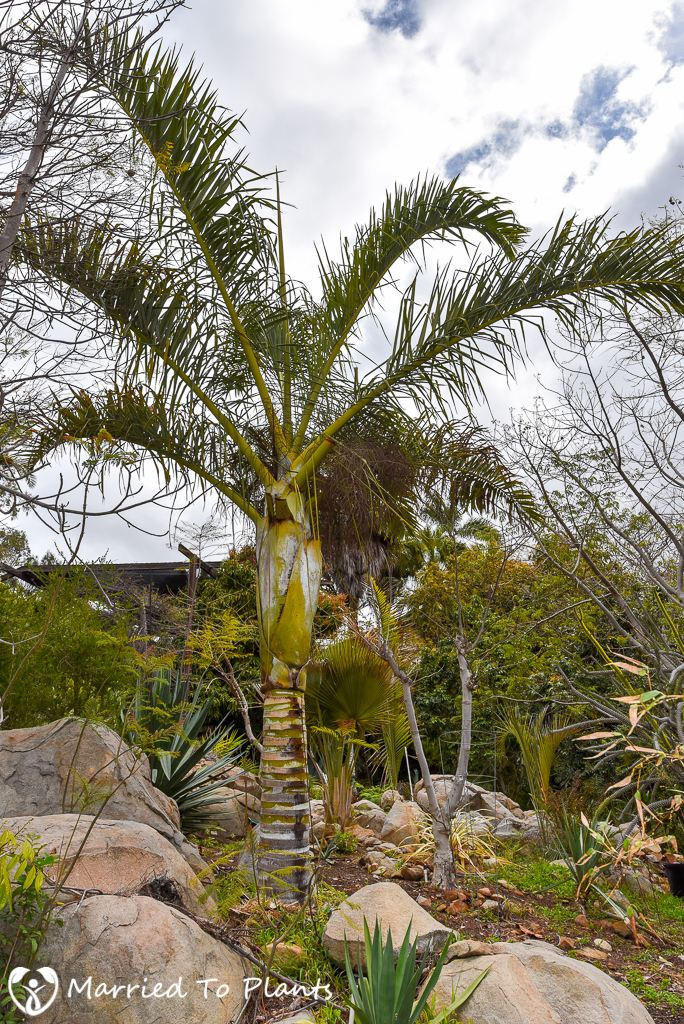 Here is another Dypsis prestoniana in the Darian garden to the right of a skinny Dypsis decipiens. 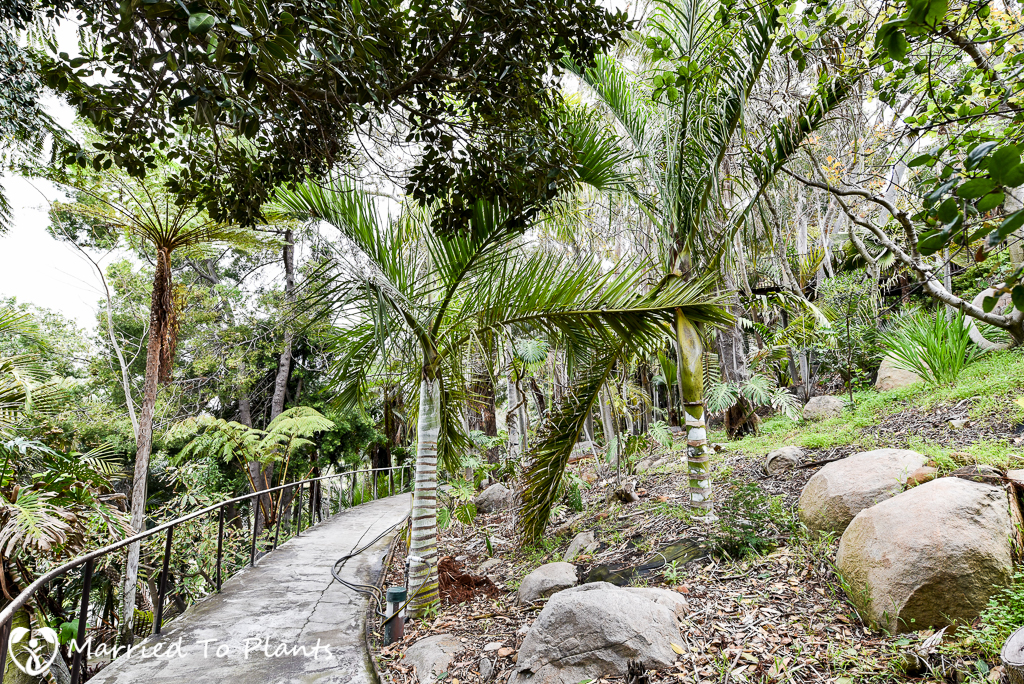 The palm I would end up buying was much smaller than those two beauties above. However, these are slow growing palms, so to find a great-sized palm available like I did made it something else that was too good to pass up on. 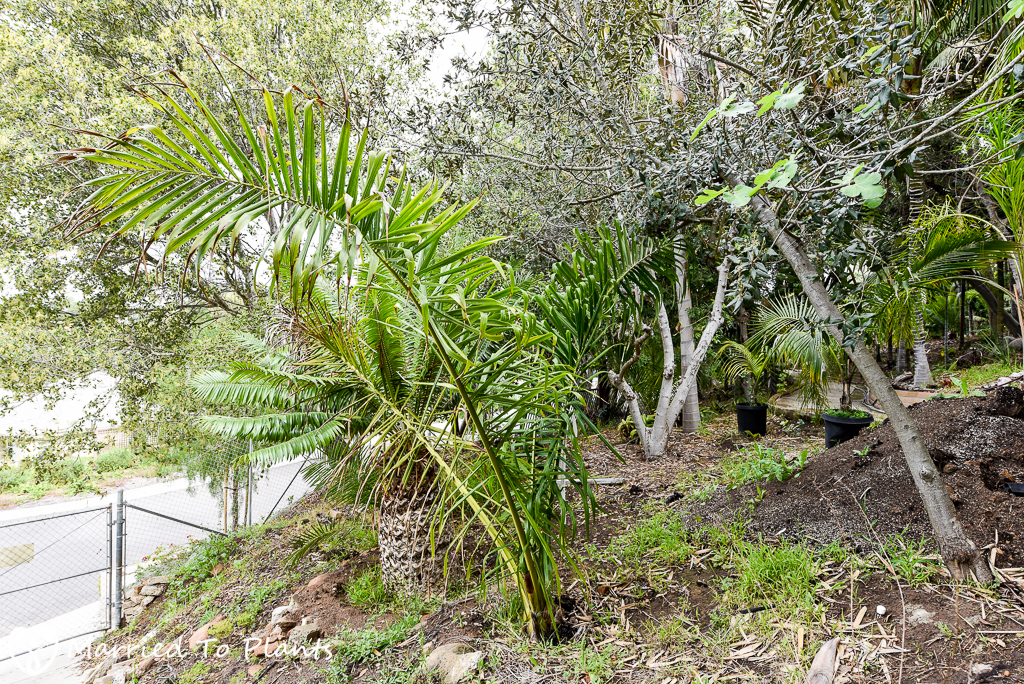 Ordinarily I wouldn’t dig a larger in-ground Dypsis like this, but I had a sneaking suspicion Mardy pot-planted this palm like he had done with so many in the past. Almost immediately after we started digging, we hit plastic. It is unbelievably convenient to find a palm like this still planted in a 40-gallon trashcan. No transplant shock!

My new Dypsis prestoniana made it home the same way the Aloe suzannae did. In fact, you can see it in the photo of the truck earlier. I don’t hold the same beliefs as Mardy Darian in pot-planting, so in my yard I would cut the trashcan open and plant the palm directly into the ground. I picked what little open, sunny space I still have available in my yard and carefully back-filled the hole after planting. This palm should really take off on me because I didn’t have to cut any roots moving it. 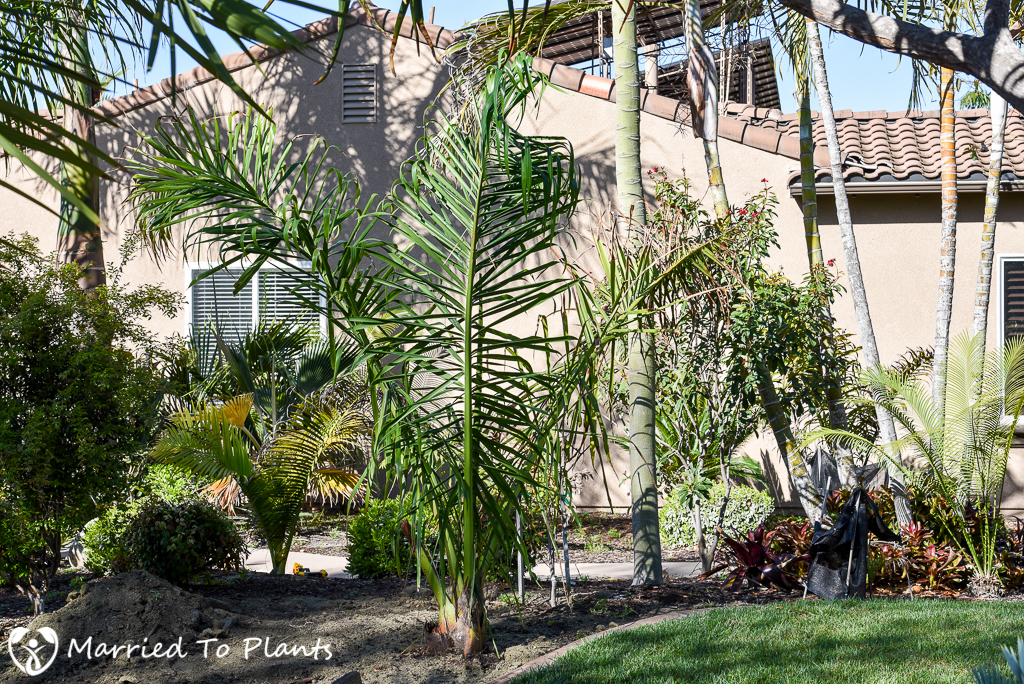 The last plant I bought at the Darian plant estate sale was the extremely rare Forest Coconut (Voanioala gerardii). Voanioala gerardii is a palm that Mardy Darian first brought to the attention of famed palm botanist John Dransfield back in the late ’80s. This monospecific palm would later be described in 1989 and is named after one of Mardy’s guides. Seed has only been available twice before, with the last being in 2006. Almost every Voanioala gerardii in cultivation has come from that seed supply. Very few people own this palm. Mardy had one growing in a part-sun location of his garden that was most likely the largest in the ground in California. Not much to look at in the bottom center of the photo below; here you are buying age and rarity over looks. It is a painfully slow growing palm, even in the tropics. 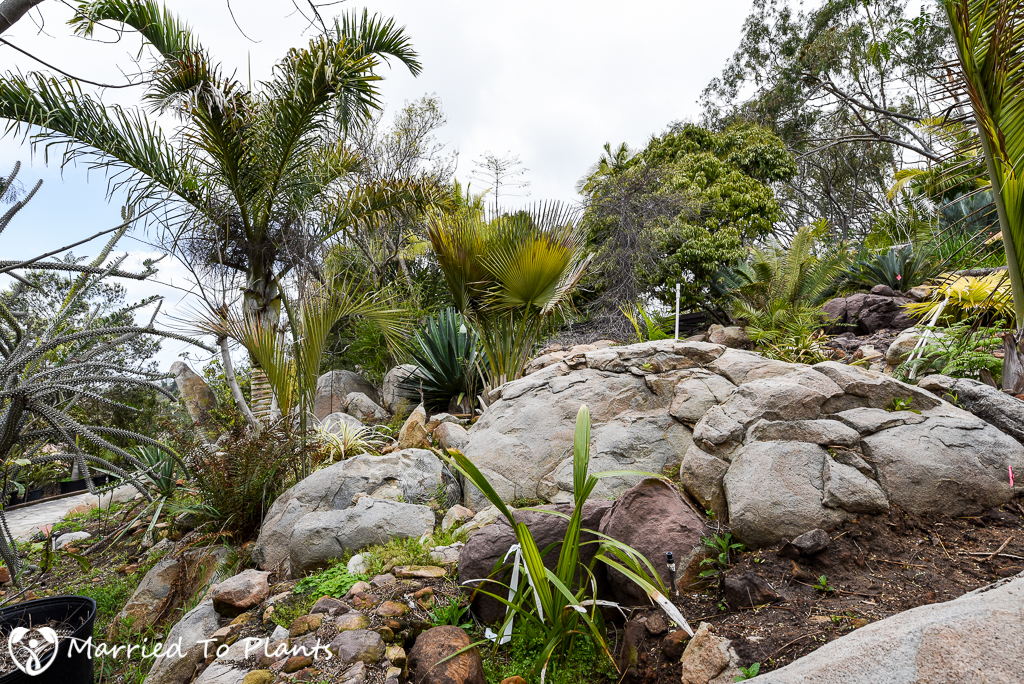 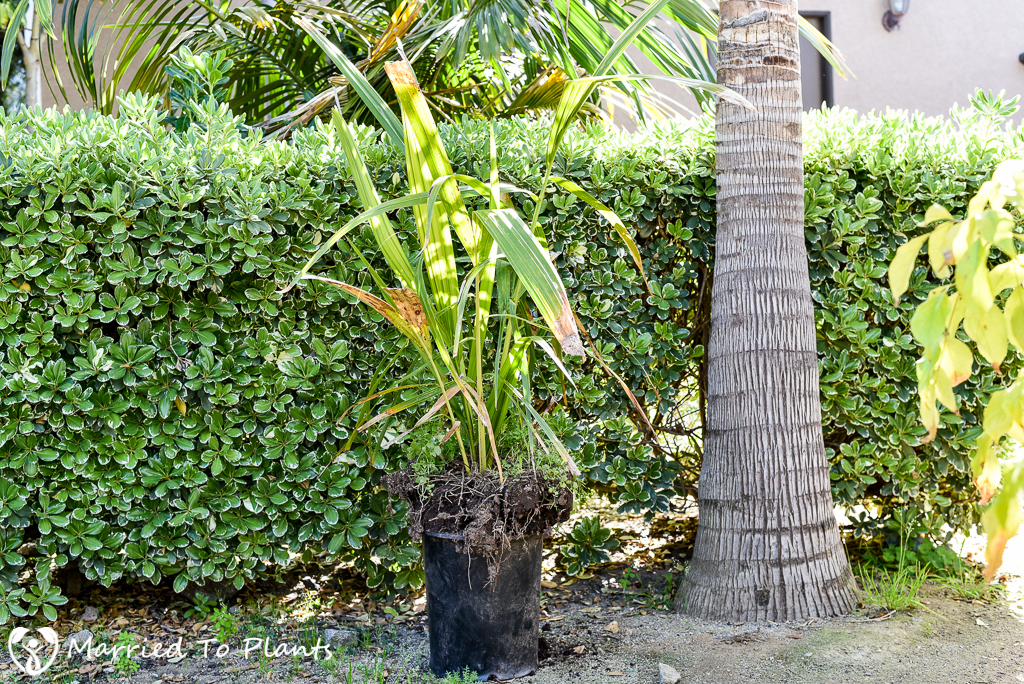 So those were my three purchases at the weekend’s plant sale. I would have loved to have bought more plants, but they were either not for sale or priced too high for my taste. In the end a lot of true plant lovers bought some of Mardy Darian’s plants. Sure there were a few rich buyers present that were there to buy status symbols, but by and large, good people got good plants to help carry on Mardy’s legacy.

Over the years I have bought and dug plants at a few estate sales and every time it reminds me about my own mortality. Not only can these sales be a mournful activity, but it hammers home the fact that almost all private gardens are single-generation events. All the love and care put into Mardy’s garden over the last 50+ years was reduced to a shell of its former glory in just three weekends. Once the house sells, it is highly likely a developer will come in and bulldoze the entire parcel and subdivide it. A once legendary garden will fade only into memory. Even my own garden someday will most likely end with my moving on. So who knows, perhaps someday down the road another lucky buyer will end up with one of these three plants I bought last weekend.