I have a few old-timer friends that have been collecting plants and building their garden for over 40 years now. When they ask me where I get some of my rare plants and I tell them off the Internet, they just laugh. They remind me that “back in their day” they would either have to travel the globe or find pen pals from around the globe to trade seed with in order to get the rare stuff. The reality is that many of us nowadays take for granted just how easy it is to find and buy the rare gems that reside in our gardens. Online shopping makes it all too convenient. In fact, I wrote a post a few weeks back on my ordering of tropical hibiscus seed from Tahiti off eBay. Now eBay has helped fuel a new plant obsession. A Bromeliad addiction.

Every day you can find hundreds of Bromeliads being sold on eBay. You can get stuff from a few dollars all the way up to a few hundred. After a little research, a few clicks of the mouse, and a few days’ wait time, this is what showed up at my doorstep yesterday. Christmas for a 45-year-old with a new Bromeliad addiction. One package from Florida and another from Louisiana. 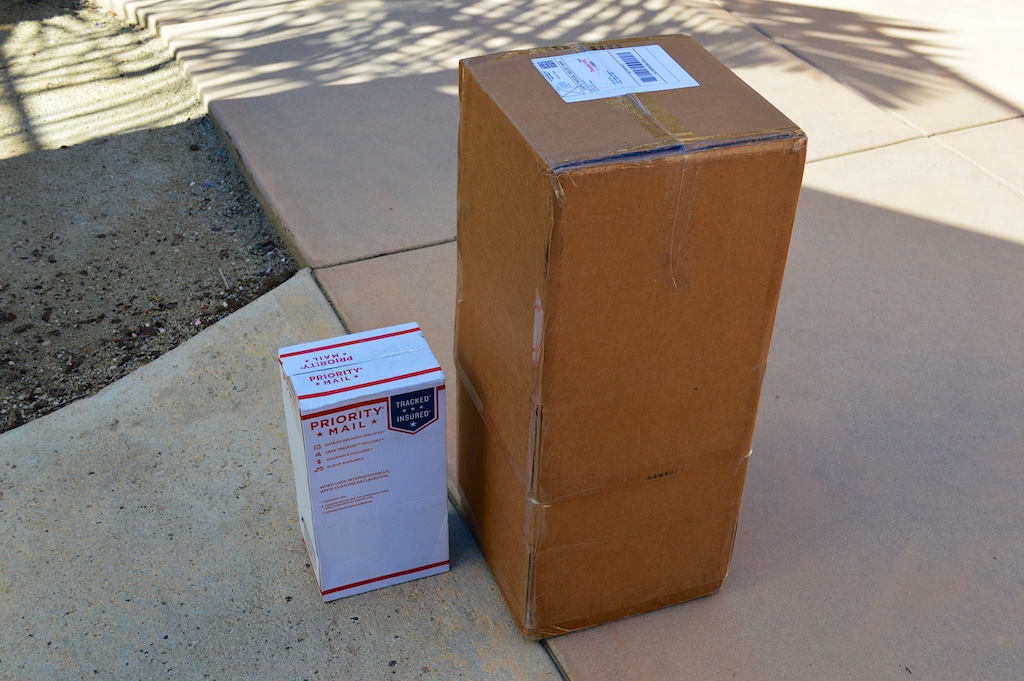 So just how many Bromeliads can fit in those two boxes? 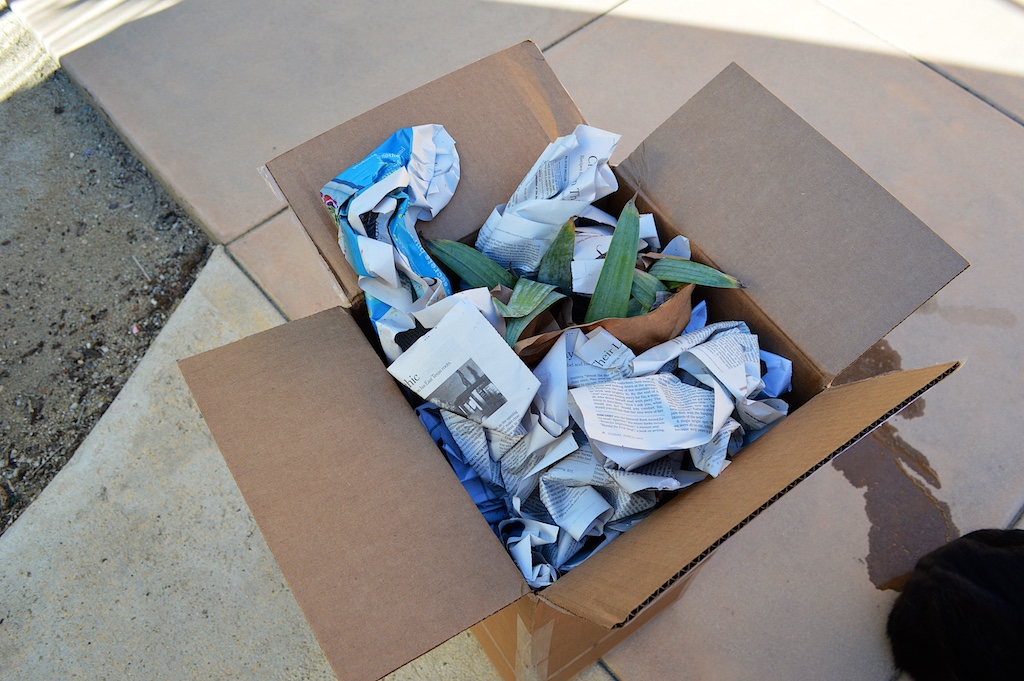 That’s right. Only four. With this order I mostly went with the larger Bromeliads. The small box that came from Louisiana had the green and yellow Bromeliad you see on the far right in the photo below. 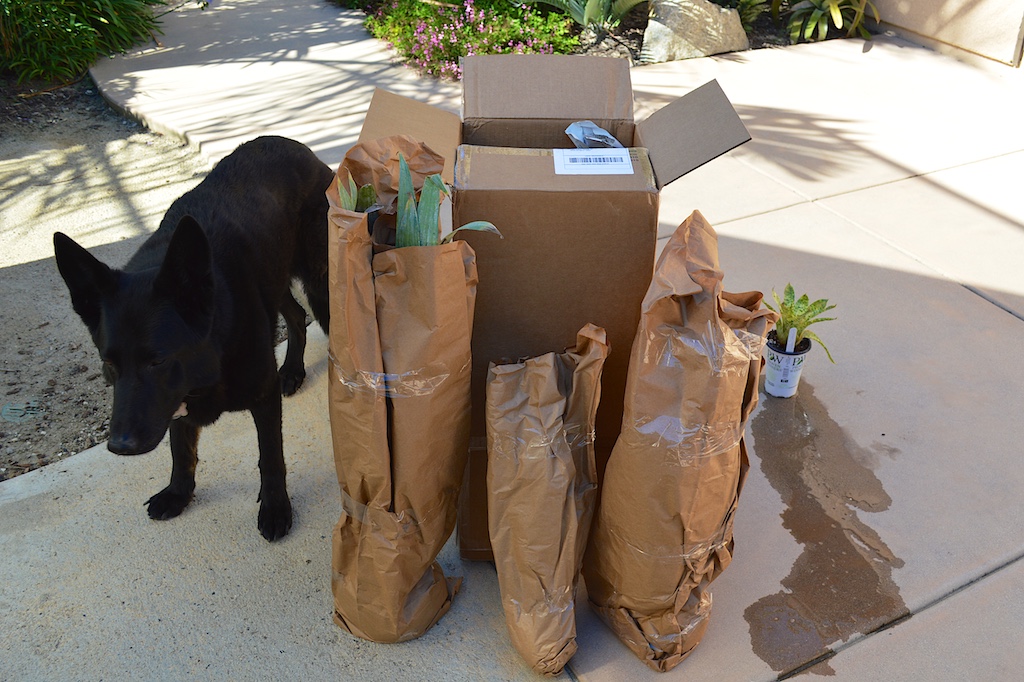 Here is a better photo of that small plant. It is a Vriesea gigantea var. seidelianaor, better known as Vriesea ‘Nova.’ I have been searching for one for over a year now after seeing how beautiful they looked in a friend’s garden. 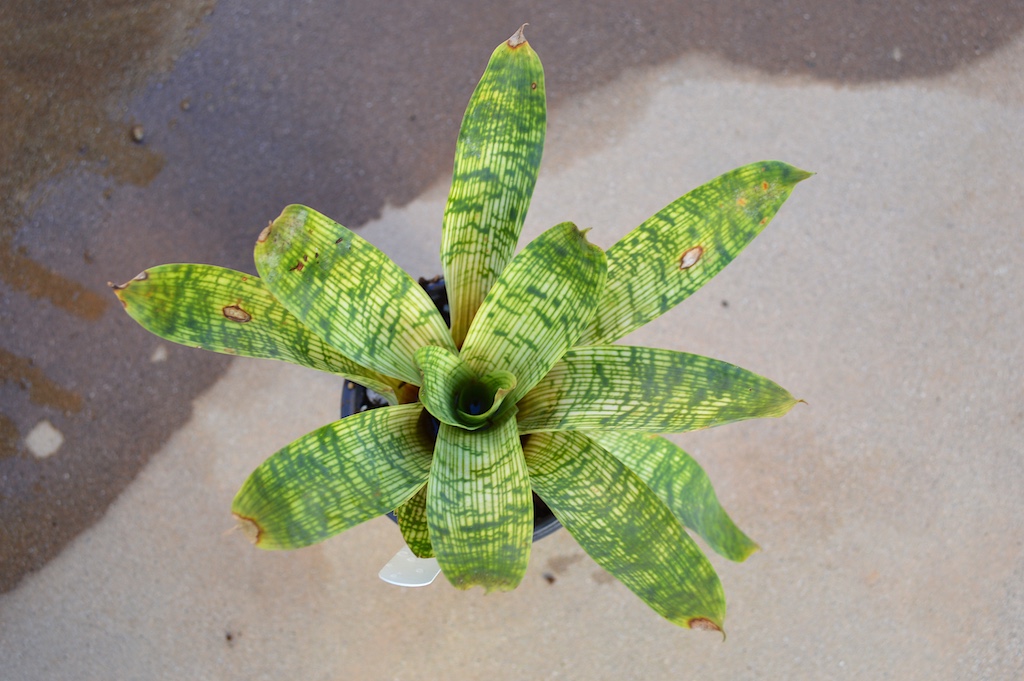 The large box from Florida had three beautifully grown Bromeliads from one of my favorite eBay venders. I have purchased from her many times in the past and have not been disappointed once. In this order I bought a Hohenbergia castellanosii that had two pups attached. This Hohenbergia found below will make a nice companion to the other Hohenbergia I have planted in my garden now. 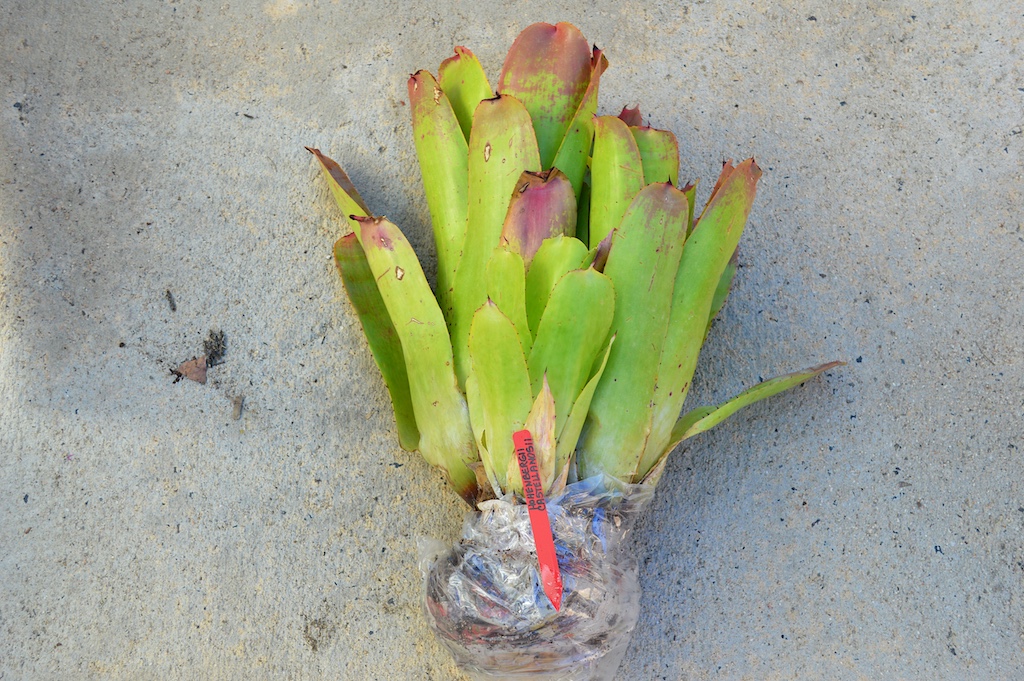 I purchased my second Alcantarea odorata off eBay so I could do a bookend planting along one of my pathways. Alcantarea odorata is covered in white powder, which gives the plant a silvery, shiny appearance. Shipping and handling removed most of the power from my plant below. 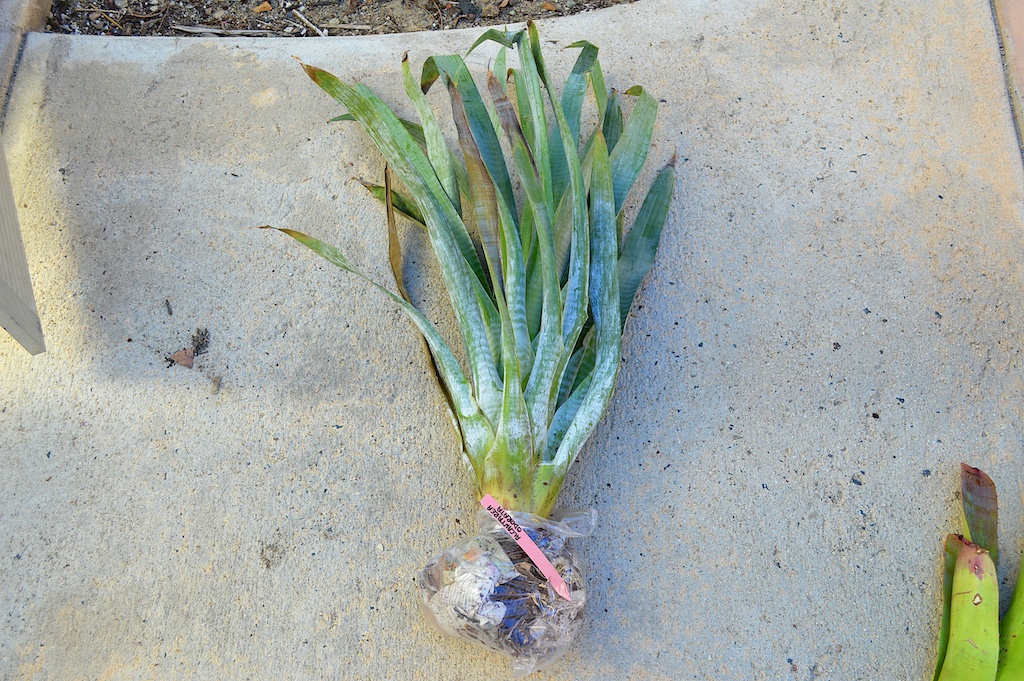 I also decided to take the plunge and try my hand at a plant from the Aechmea chantinii group. These are notoriously difficult plants to cultivate outside in California. In my opinion, Aechmea chantinii ‘Samurai,’ like mine below, is one of the nicest forms of the many that can be found. 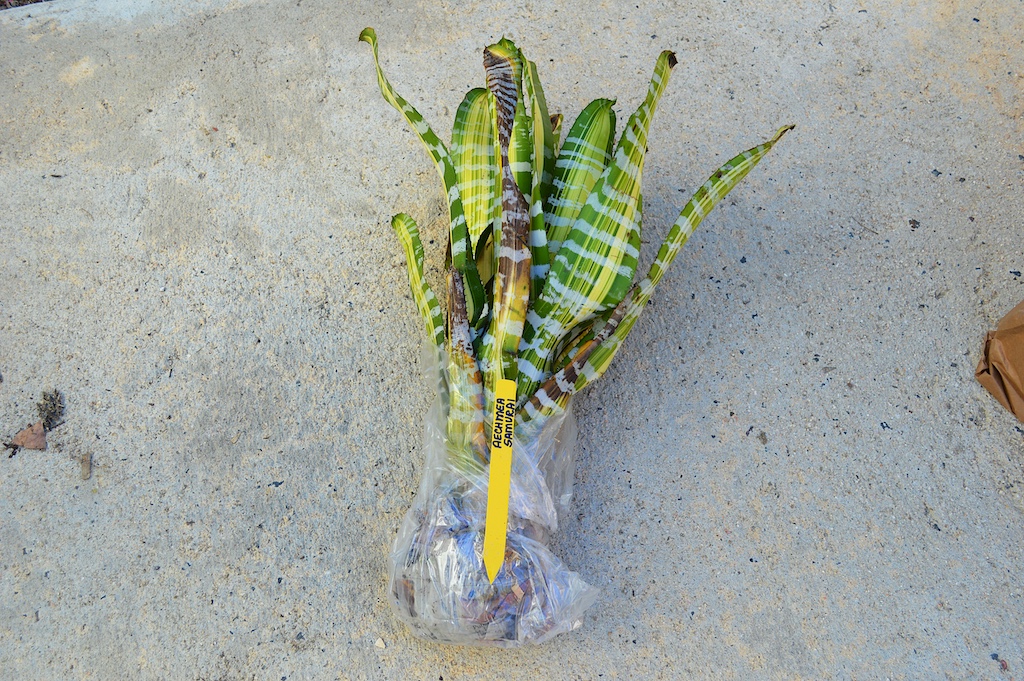 Here are all the plants bought off eBay this order, which are now helping me nurture my growing Bromeliad addiction. You can see I already separated the two pups off the mother Hohenbergia castellanosii. 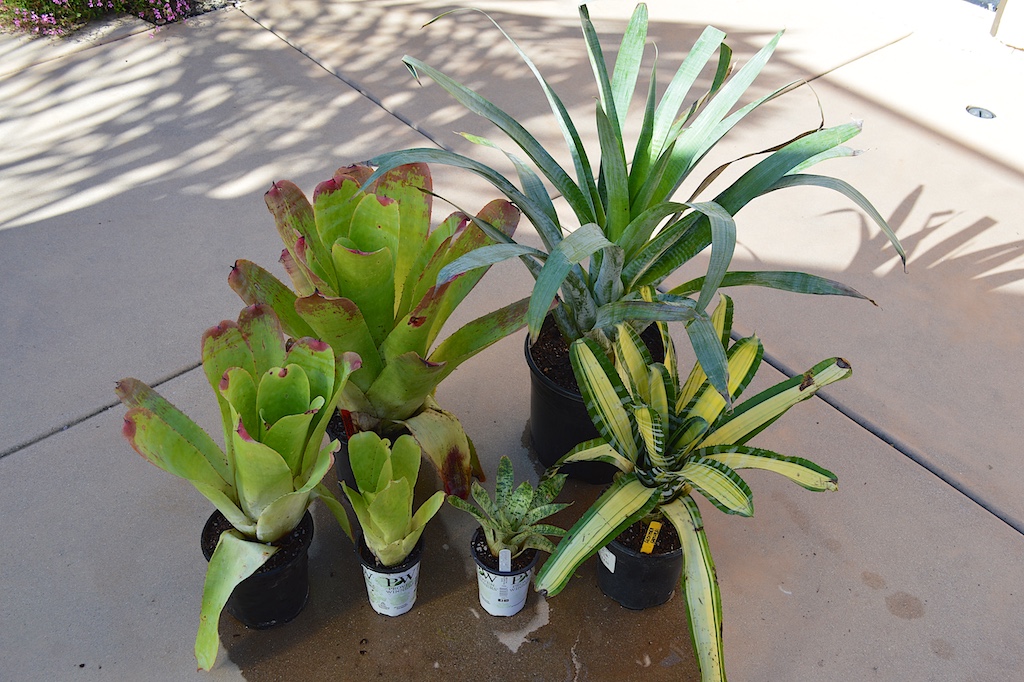 Typically I won’t immediately plant out any of my new Bromeliads I receive from hot and humid areas like Florida. I usually pot them up and store them in the greenhouse for a year or I put them out under 30% shade cloth for a year. The shade cloth gives them a chance to harden off and color up to get ready for planting into the garden the following spring. Here are some of the new Bromeliads I just received plus a few others I bought prior. The two Bromeliads on the far left are a new plant I am looking forward to getting planted in the garden. They are a variegated form of a SoCal garden favorite – Billbergia ‘Hallelujah.’ 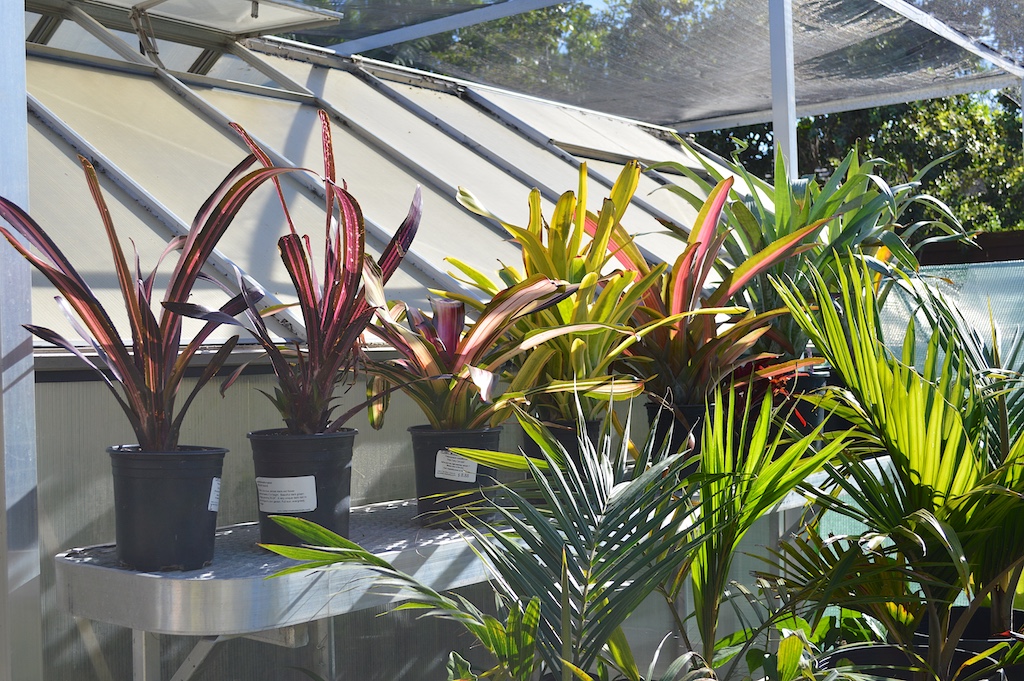 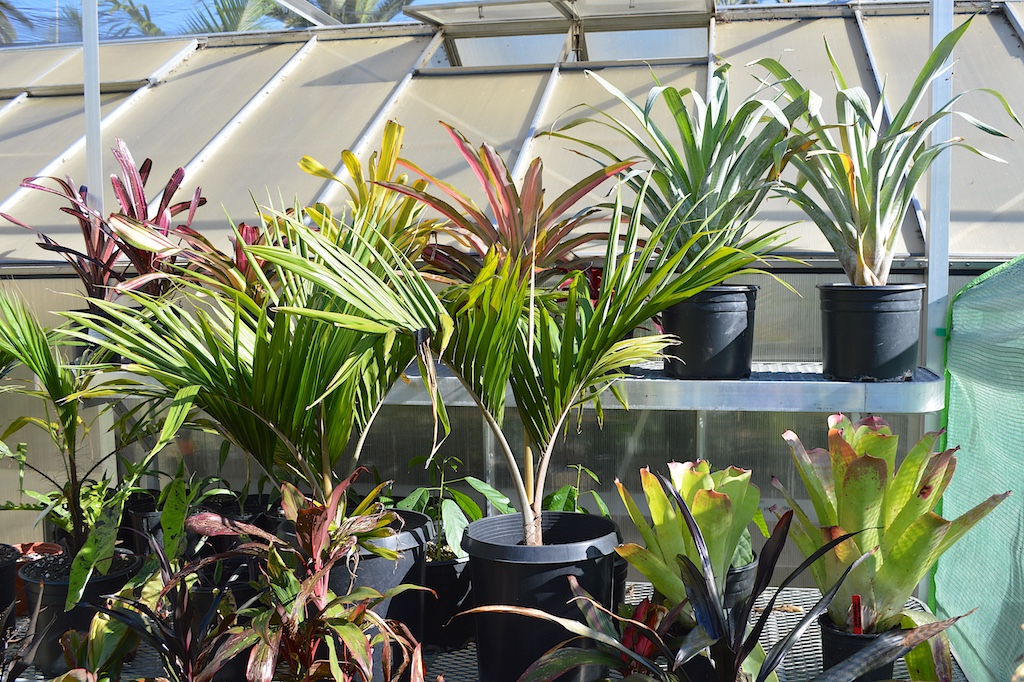 Bromeliads that are slow to root or generallly harder to grow always end up in my greenhouse. I like to get them to pup with the intent of placing the pups outside into the garden. Here you see my Aechmea chantinii ‘Samurai’ and the smaller of the two Hohenbergia castellanosii pups I removed. 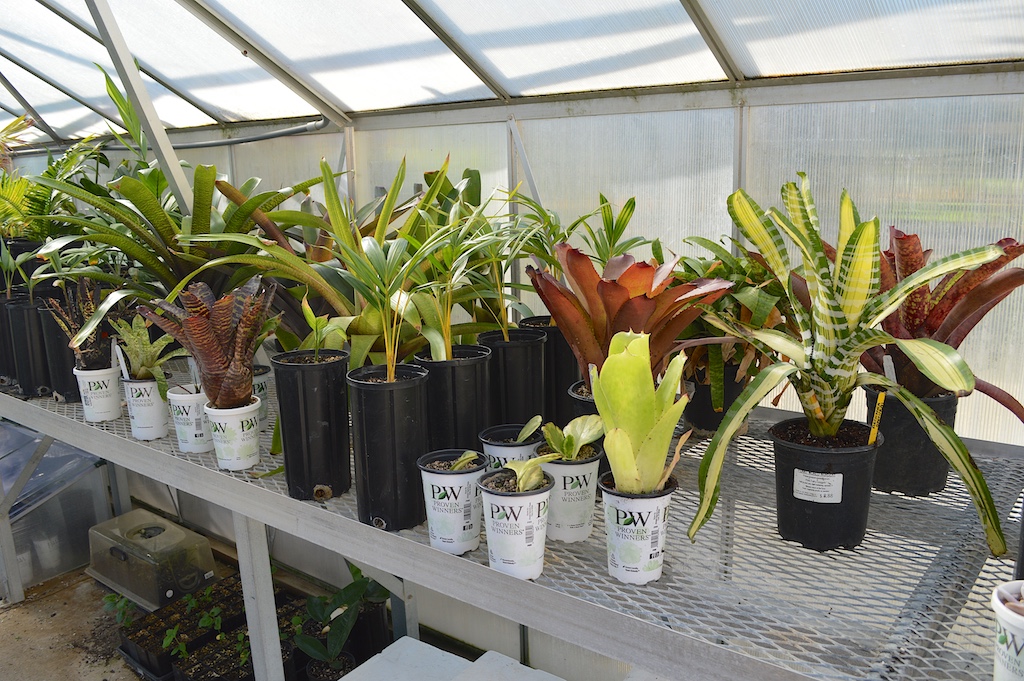 Here you can see why I wanted an Aechmea chantinii ‘Samurai’ so badly. Such a beautiful plant. 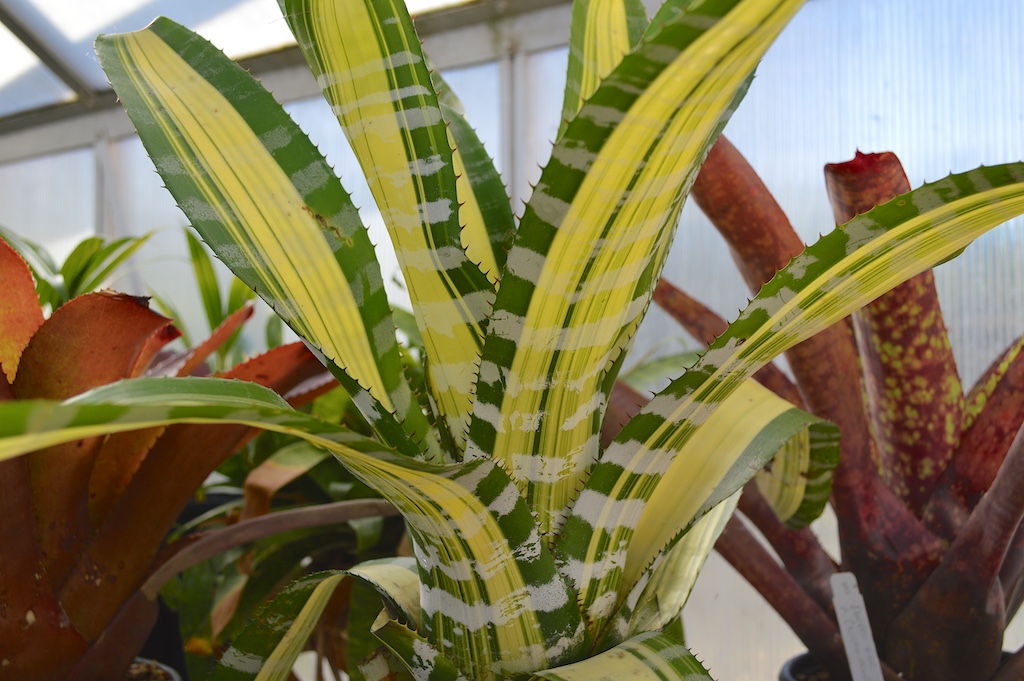 Boarding my Aechmea chantinii ‘Samurai’ is Neoregelia ‘Darkest Hour’ x Neoregelia correia-araujoi on the right with Neoregelia ‘Purple Star’ x Neoregelia ‘Carcharadon Tiger’ on the left. These two Bromeliads came in on my last order two weeks ago. Bromeliad addiction? 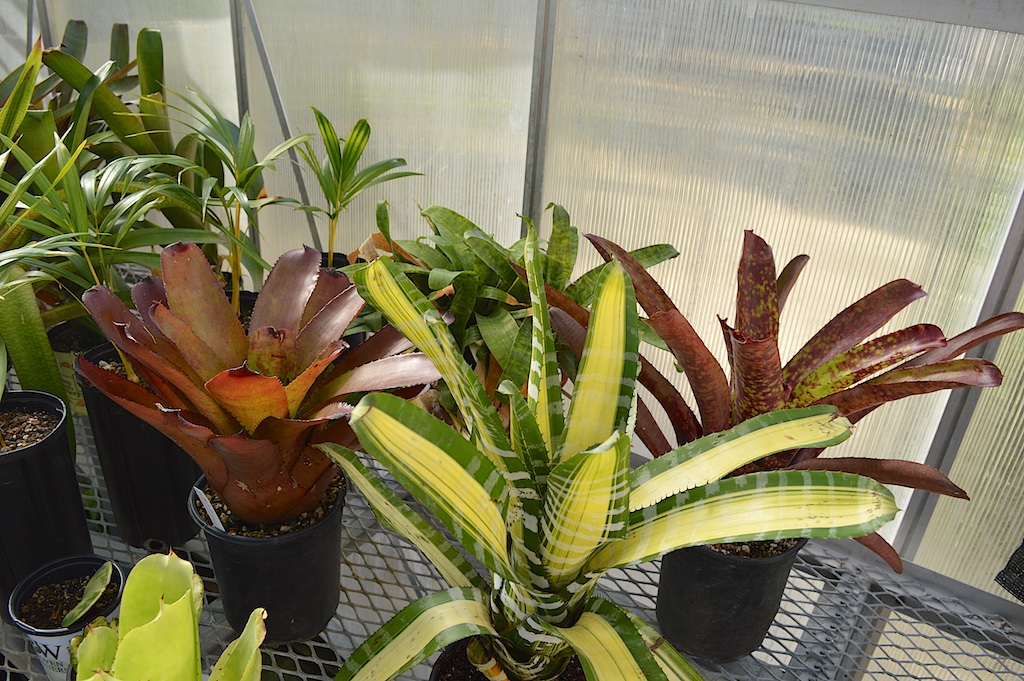 Finally, what collection would be complete without a Neoregelia ‘Hannibal Lector’?

I know it won’t happen, but sometimes I wish I could just hide eBay. I found myself procrastinating a few times while trying to write this week’s post. I believe it was my subconscious calling me back to eBay to look at more Bromeliads – and that is where I ended up. The problem is that eBay doesn’t just support a Bromeliad addiction. It supports a succulent, palm, cycad, agave, clivia…