Rafflesia is a plant that few have ever heard of. How could you, as it has never been cultivated outside its native habitat in the rainforests of Indonesia, Malaysia, Thailand and the Philippines. To see it in the wild involves some serious effort – and luck. From my home in San Diego I had to travel for two days to arrive at my hotel in Sabah, Borneo. The following morning still required a three-hour drive into the rainforest. Jet lag, extreme heat and humidity all made the final part of the journey the hardest. But luck was on my side, as a few Rafflesia were in flower. A real rarity. So a blog post had to follow.

In order to reach the location where a Rafflesia was flowering we had to pass by Mount Kinabalu. Mount Kinabalu is the tallest mountain in all of SE Asia and driving by it gave me an early glimpse of what I would be climbing in two days. I was fortunate to get a photo of the peak, as during this time of year the peak is usually hidden in clouds by late morning. The palm is a Caryota no. One of the few palms from Borneo that you can actually grow in Southern California. 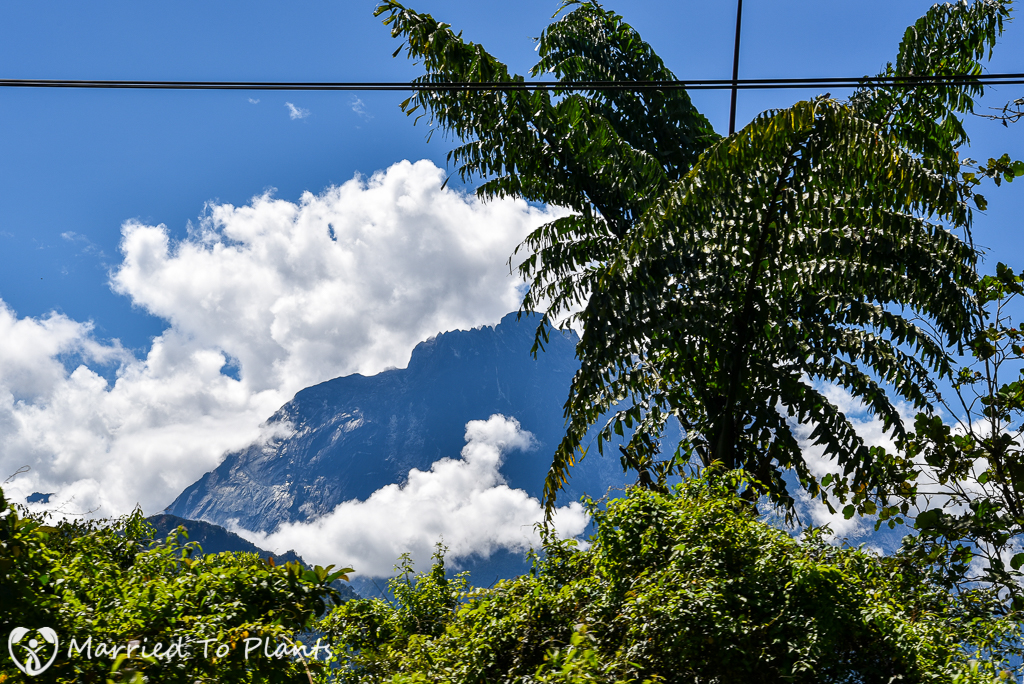 The drive was only around 150 kilometers from my hotel, but getting stuck behind large fuel trucks on the steep narrow roads made it a three-hour drive. Without a knowledgeable guide I might have just driven by the location where they were in bloom that day. Just a small sign along the road and a few cars mark the spot. 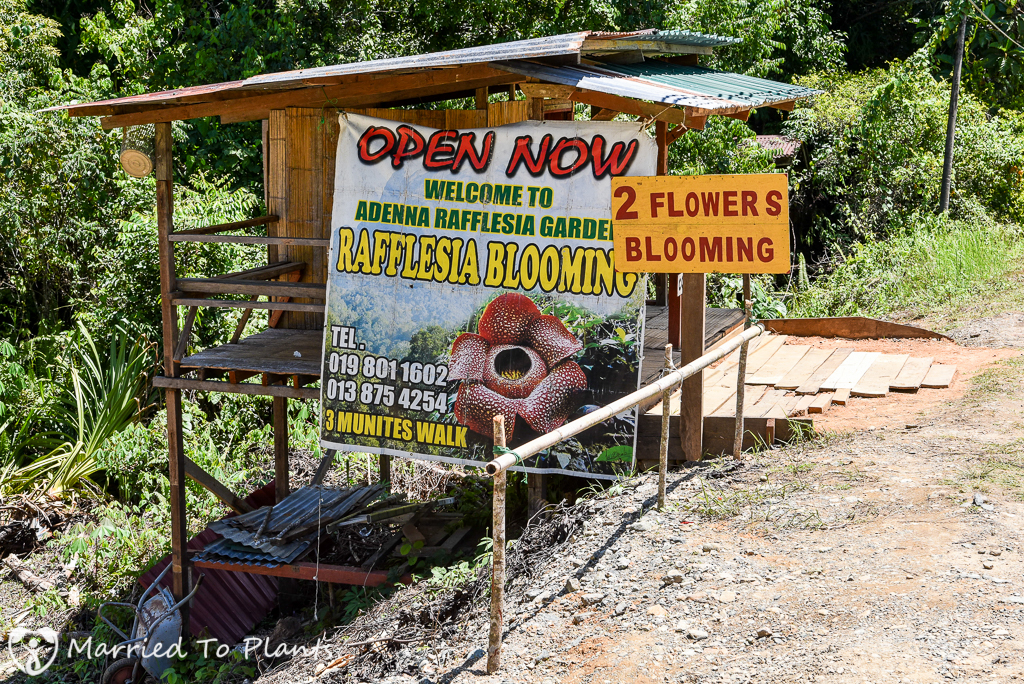 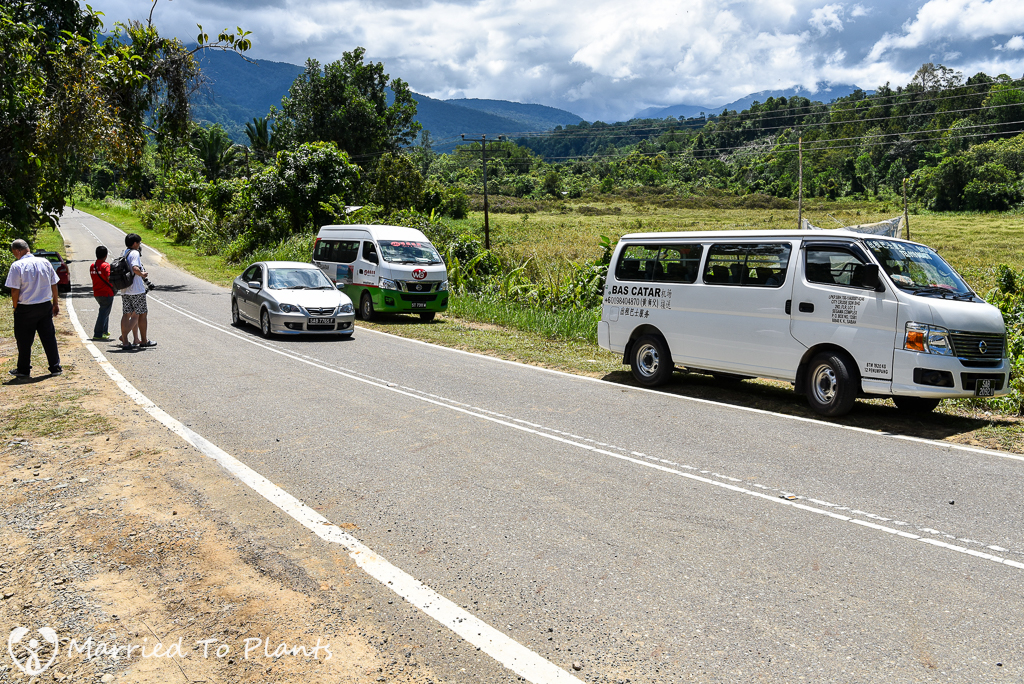 Before we left the hotel to arrive at this location, my guide had to call around that morning to find out where in Sabah a plant was in flower. While Rafflesia is the official state flower of Sabah, it doesn’t mean it is abundant and can be viewed daily. A Rafflesia in flower is actually a rare event, with more people leaving Borneo not having seen the famous flower than those that were lucky enough to be in the right place at the right time. After a few dead ends my guide informed me that he heard the Adenna Rafflesia Garden had not just one, but three in flower. The Adenna Rafflesia Garden was just outside Poring Hot Springs, which would be my next stop after visiting the blooming Rafflesia. 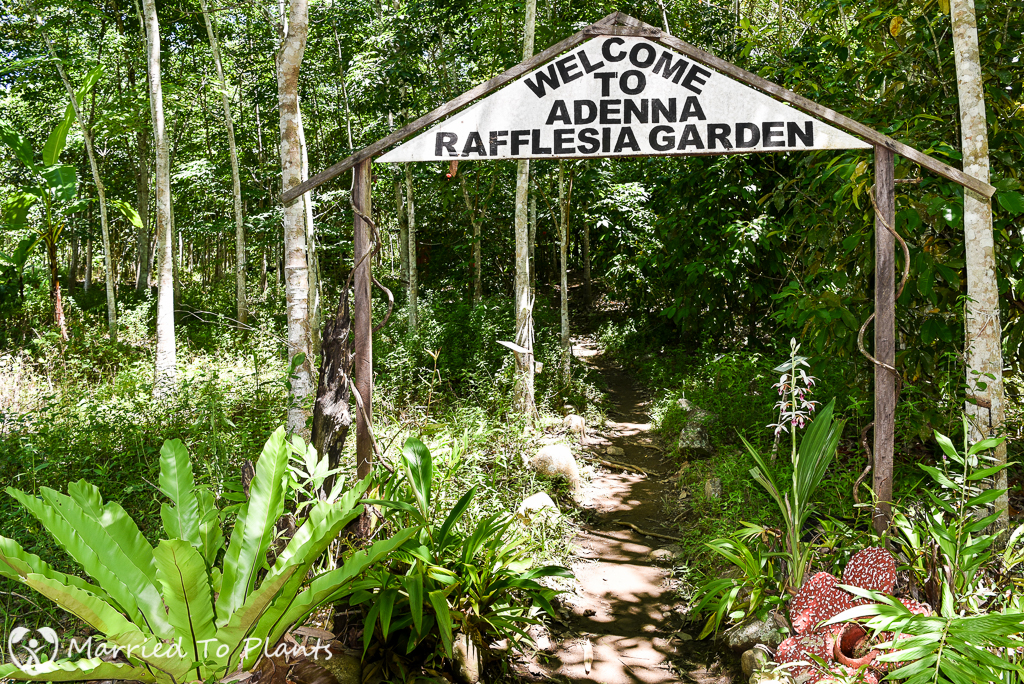 Before I show the flower I should probably tell you what makes Rafflesia worth the effort to visit in habitat. First and foremost is that it is known for having the largest single flower of any plant in the world. The world record holder had a bloom of 3 feet, 6 inches wide and an incredible weight of 24 pounds. Second is its odd nature. Rafflesia is a rootless, leafless, parasitic plant that attaches itself to a host plant, usually a Tetrastigma vine. Because Rafflesia has no chlorophyll it cannot undergo photosynthesis. So it needs this host to survive. The only time you will see a Rafflesia is when it is in bloom. Third is that its common name is the “corpse flower” (not to be confused with Amorphophallus titanium). This refers to the smell of rotten meat that it emits when in flower. Finally, let’s not forget that it is also a magnificently gorgeous flower.

The walk into the jungle was a short one before reaching the first flower. Along the way you could find viewing platforms built in a few areas. Deforestation and over-harvesting for traditional medicine is putting pressure on the conservation of Rafflesia. Removal of the forest means the removal of the vine that Rafflesia depends on. Seeing these built platforms told me this location had an abundance of the plant’s host.

So now, wiithout further ado, I give you a newly opened Rafflesia flower. 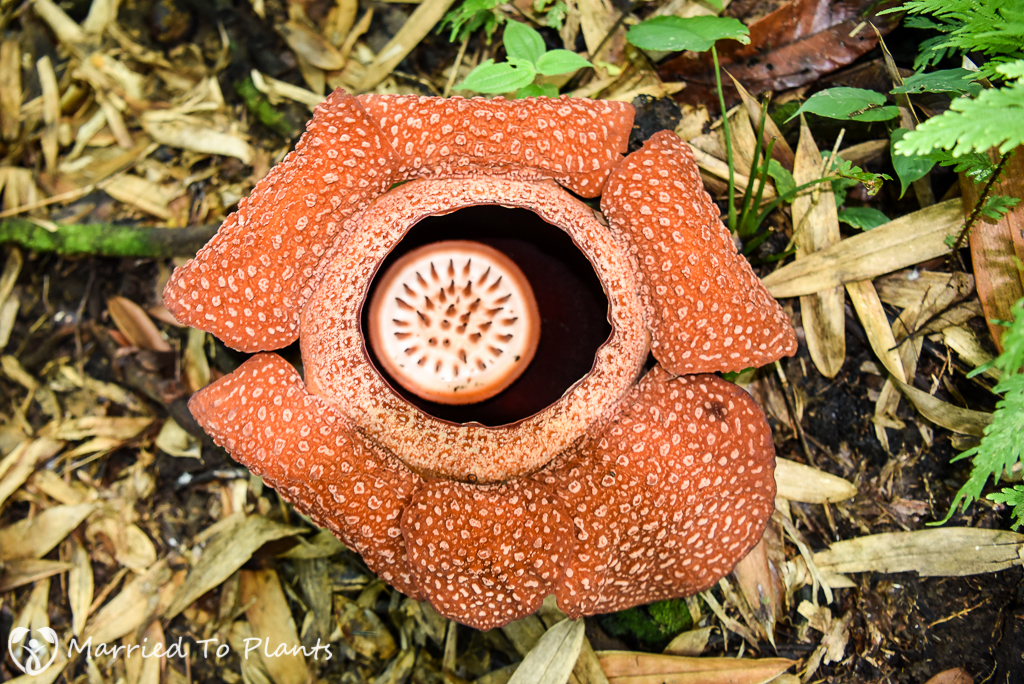 Individual flowers are either male or female. “The Giant Panda of the Plant World” is made up of five lobes coming off a cup-like structure. In the center of the cup is a column with a disk. It is from that disk that the smell of rotting flesh attracts carrion flies which pollinate it. You can see these flies in the video below.

It is very difficult to get an exact number as to how many different Rafflesia species there are in the world.  It ranges from a low of 16, to as high as 28 known species at one point. Sadly, some species are now presumed extinct as they haven’t be seen for decades. The species with the largest flower in the world is Rafflesia arnoldii. However, that species is under extreme pressure and seldom seen. The flower shown above is from Rafflesia keithii.

A Rafflesia flower doesn’t last very long. Four to five days seems to be about the norm. However, with some protection from the sun and if people keep their hands off it, it can last for almost a week. This is why you see a shade cloth placed above the flower and a barrier with a sign keeping tourists away in the photo below. I have consistently witnessed, in my over 20 years of third world travel, just how disrespectful many tourists can be of nature, particularly those from China. Without this barrier, people would be touching, smelling and falling over these poor plants before they could even be pollinated. Worse yet, they would be stepping on newly emerging flower buds, destroying the flower and its ability to reproduce. 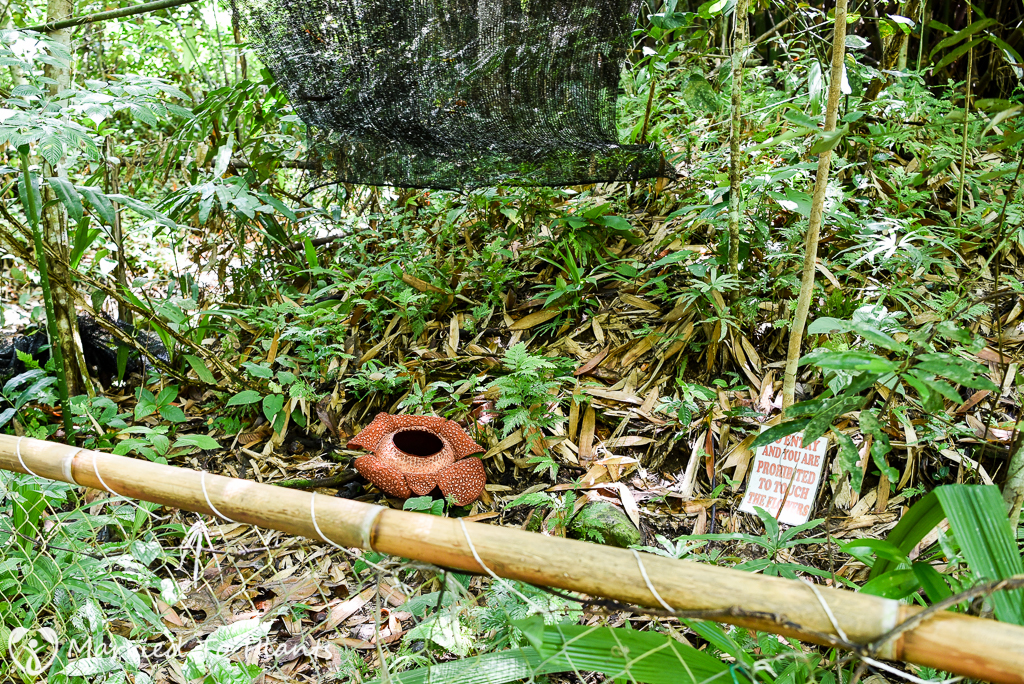 With that being said, with just myself and an Adenna Rafflesia Garden attendant around, he allowed me to jump the barrier to give the flower some scale and smell it. He took this photograph of me next to the newly opened Rafflesia keithii flower. This is something they usually only allow botanists or researchers to do. So I felt honored that he offered up the opportunity. It must have been my honest face that did it.

The sign by the road promised “2 flowers blooming.” The Rafflesia keithii flower pictured above had just opened that morning. The flowers in the photos below were the two the sign mentioned. I don’t know if it is just that Mother Nature loves me or what, but I have always been lucky seeing things in the wild. From rare animals to even rarer plants, I usually end up seeing what I set out for. My quest to see just one Rafflesia flower was met with the incredible opportunity to see the plant in most stages of its life. From a brand new emerging flower bud to old, dead pollinated remains. I even got to see a flower in day 1, day 3 and day 5 of its life span. Below shows the day 5 flower at the top and day 3 below it. You can also see emerging flower buds to the right.

Day 5 flower closeup with the day 3 flower in the photo below it. 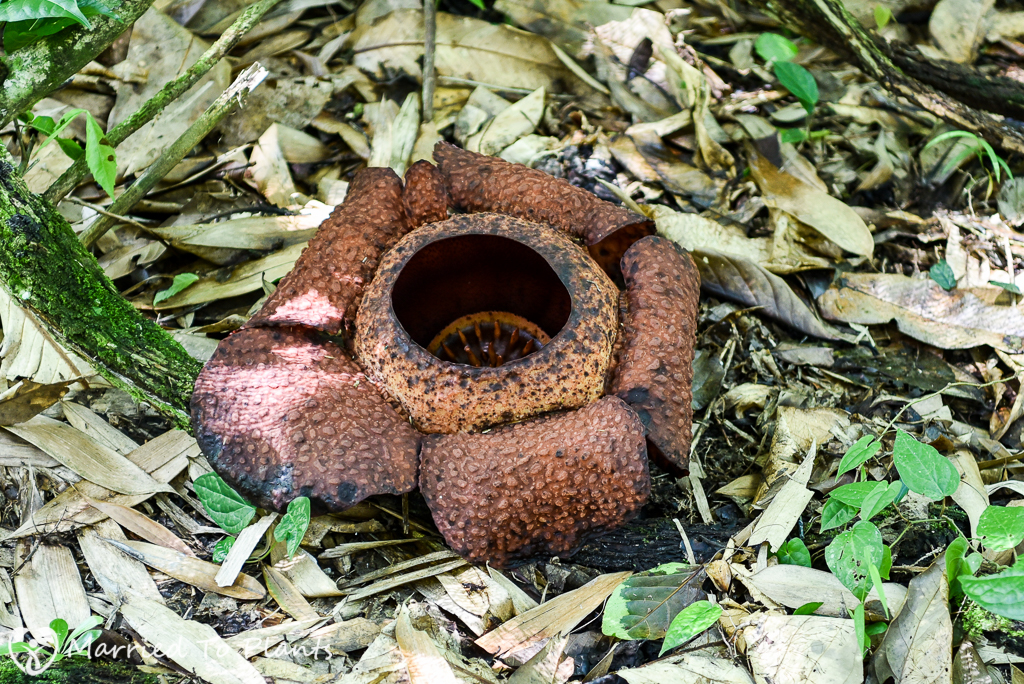 Another view of the day 3 flower along with some emerging flower buds to the right.

For most of its life Rafflesia lives hidden in its host and only becomes visible to the world when the flower buds emerge through the bark of the host plant. From the time the bud first appears it will take about 9 to 10 months for the flower to bloom. Below you can see a brand new bud forming to the right of an older one. 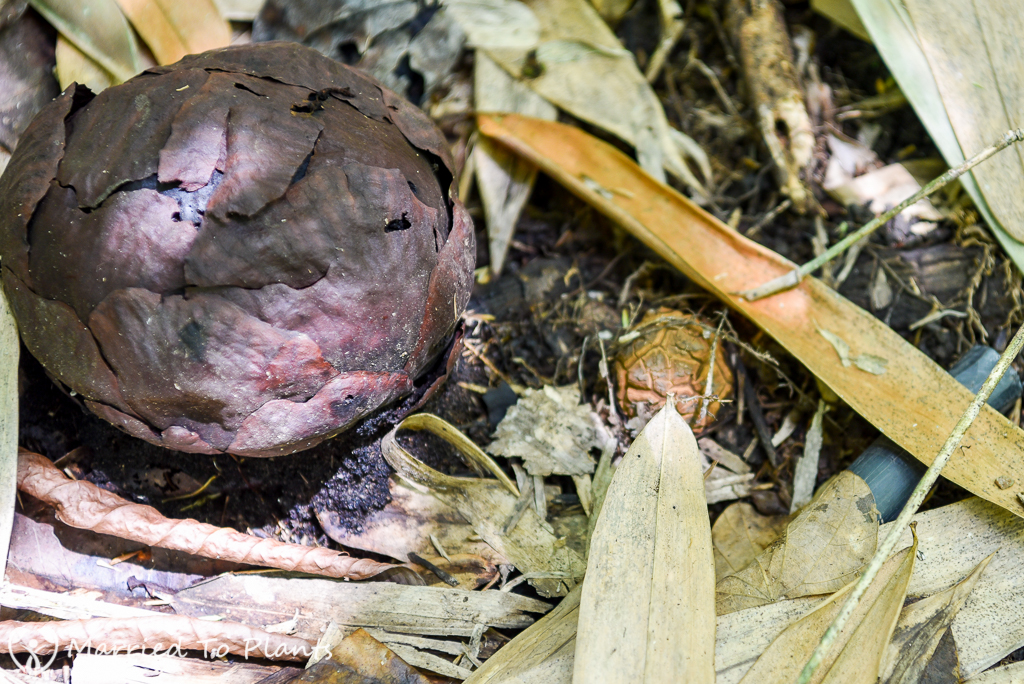 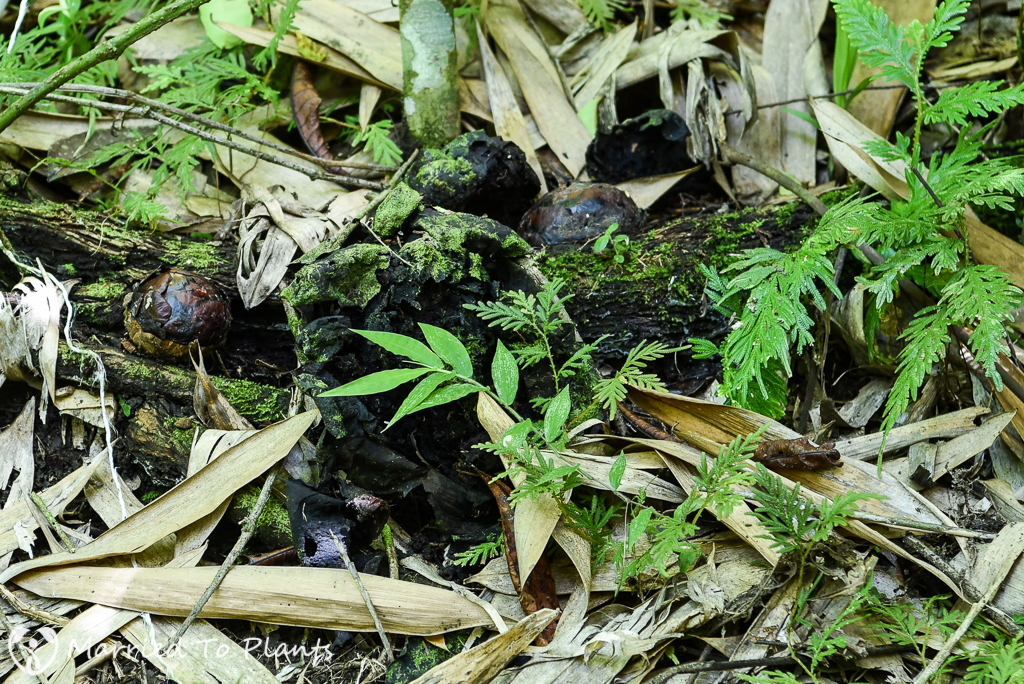 This is an old flower that was successfully pollinated. It will eventually make seed which will then be dispersed by tree shrews, squirrels and wild pigs. 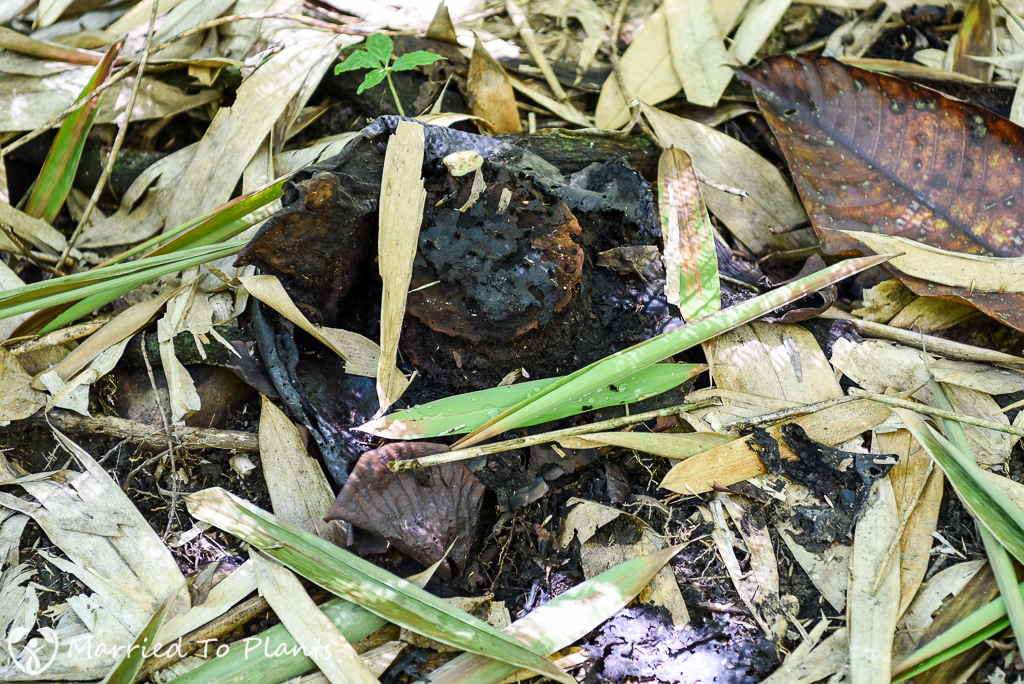 Before I close out this post I wanted to give you an interesting bit of history about this genus of plant. The first botanist to find a specimen of Rafflesia was a Frenchmen named Louis Auguste Deschamps way back in 1797. It was on the island of Java that he would collect a specimen of what is now known as Rafflesia patma. Coming back home to France in 1798 his ship was taken by the British and all his papers on Rafflesia confiscated. It wouldn’t be until 1954 that those papers would be rediscovered at the Natural History Museum in London. For over 250 years Deschamps’s record of first discovery went unknown to the world and with it his chance to have this unique plant rightfully named after him.

The Rafflesia would eventually get its name from the next group of people to document the collection of it. In 1818 a Malay servant of the now famous British statesman Sir Thomas Stamford Bingley Raffles found a plant on the island of Sumatra. Sir Thomas Raffles is known as the founder of modern Singapore. The famous circa-1887, Colonial-style “Raffles Hotel” where the Singapore Sling was invented is named after him. Thanks to fellow Brit and pal naturalist Dr. James Arnold, Sir Thomas Raffles would also have a plant genus named in his honor. What really happened is that the Sumatran plant discovery would end up being described by those two and they would end up naming it after themselves – Rafflesia arnoldii.

After spending 30 minutes photographing the Rafflesia flowers at the Adenna Rafflesia Garden and a few hours touring Poring Hot Springs, it was time start the three-hour journey back to my hotel in Kota Kinabalu. I had a promised engagement to meet my wife for drinks at sunset. I got back just in time! What a way to end my first day in Borneo. 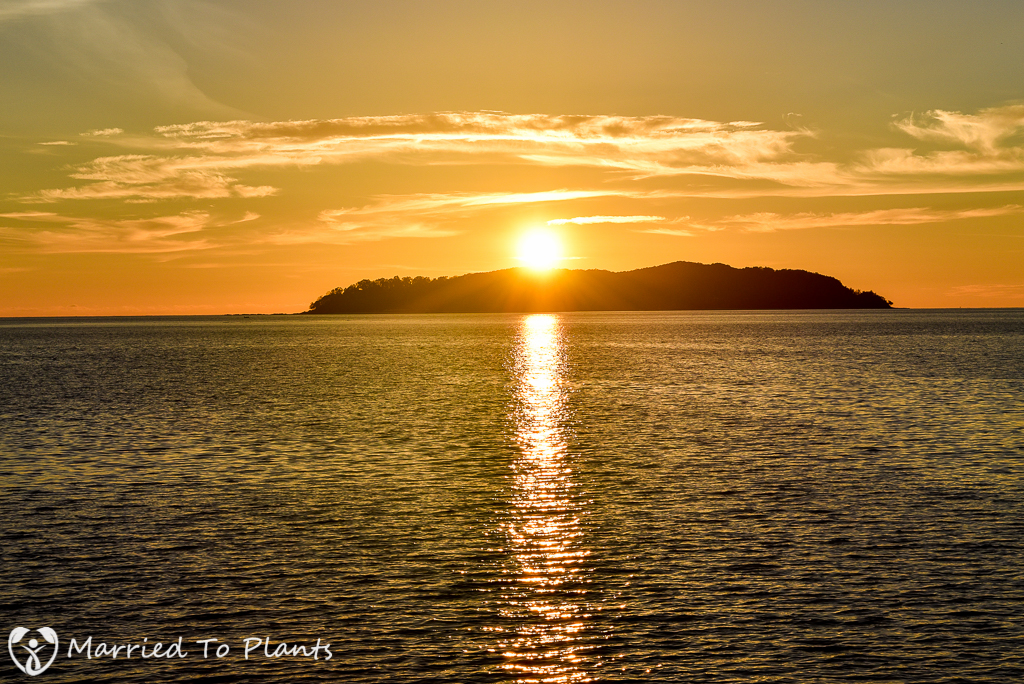