Ah yes, SUPERthrive. The most well-known snake oil in the gardening world or the champion of plant growth and transplant shock prevention? The debate has raged for decades now. Having personally read and listened to so many opinions on the product over the years, I decided to take the bull by the horns and run my own SUPERthrive experiment for plant growth. Looking for a fairly quick growing plant and because I mostly grow palm trees in my greenhouse, I decided to use Archontophoenix alexandrae for my SUPERthrive experiment, which would take place over an eleven-month period.

For those of you new to the gardening world asking, “What is SUPERthrive?” the answer is rather difficult. Not many really know what it is. From the SUPERthrive website:

SUPERthrive is a highly concentrated non-toxic vitamin solution invigorating all variety of greenery for home gardeners and professionals alike. It is equally suited for hydro-seeding, hydroponics, and foliar spraying.

SUPERthrive maximizes potential by quickly building a strong root base and reducing transplant shock.  SUPERthrive replenishes the soil to nourish and encourage the natural building blocks that plants make themselves under optimum conditions.

Many years ago, while asking some questions on organic fertilizers, I was told by an old master gardener at a local nursery to “never trust a genie in a bottle.” Many organic fertilizers make claims that really can not be backed up but they make you feel good using them. That saying about “never trust a genie in a bottle” could not be any more true when it comes to the old SUPERthrive label (below left). Loaded with outrageous claims with nothing verifiable past the poor grammar used throughout the label.

The founder’s daughter now runs the company and they have since toned down the label quite a bit (bottom right). Gone are the days of brazen promises of amazing plant growth. Today it is more about rooting and transplant shock reduction. In reality I miss the crazy old label. 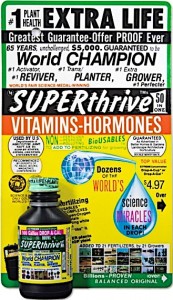 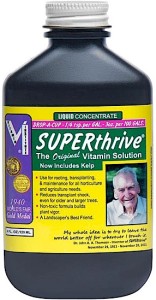 I am sure that even after you read everything you are no closer to knowing what SUPERthrive is. However, if you dig deep enough you will find that SUPERthrive is a liquid concentrated vitamin and rooting hormone supplement for plants that contains .09% vitamin B1, .048% 1-Naphthyl acetic acid, plus over 50 undisclosed proprietary ingredients. The guaranteed analysis is .05-0-0 with total Nitrogen at .05% being derived from kelp.

So that’s where I will leave it. Frankly, because I couldn’t help you past that. What we really want to know is, “Does it work?”

At the beginning of January of 2014 I had some Archontophoenix alexandrae seedlings growing in a community germination container that needed to be moved up to their own pots. It was with these seedlings that I started my SUPERthrive experiment to test if it had any benefit on palm growth or overall health. 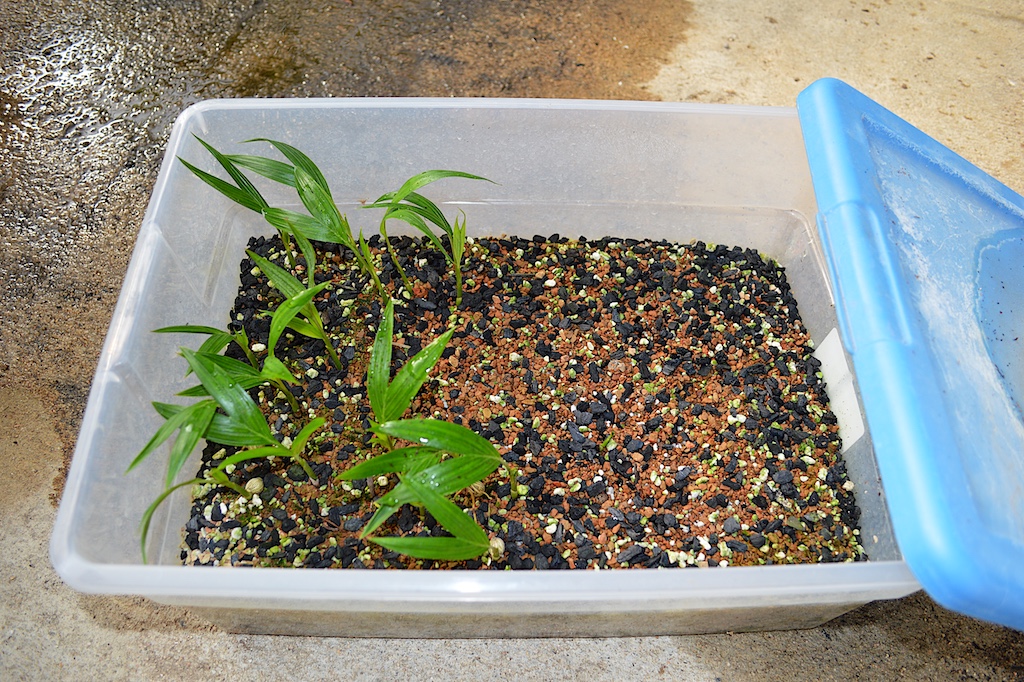 Most of the Archontophoenix alexandrae seedlings I used were already starting their second leaf of growth. Anyone that has grown Archontophoenix before will know they are pretty vigorous rooters. The point being, I was a few weeks late in potting them up, so many of the roots had started growing together by the time I separated them. I was as careful as a man with ADHD could be in pulling them apart, but I am certain a few lateral and hair roots were broken off on some seedlings. The importance of this comes later in the blog post.

I decided to use twelve total plants in my experiment. Six that would be given a regular regimen of SUPERthirve (treatment group), and six that would become my control group. All twelve seedlings were potted into their own 2.6-liter Stuewe treepots. I was careful to equally balance where each seedling went. For example, I would grab two seedlings at almost the same exact point of growth and put one in the SUPERthrive group and the other in the control group. An “S” marked the pots on the right that would get SUPERthrive. 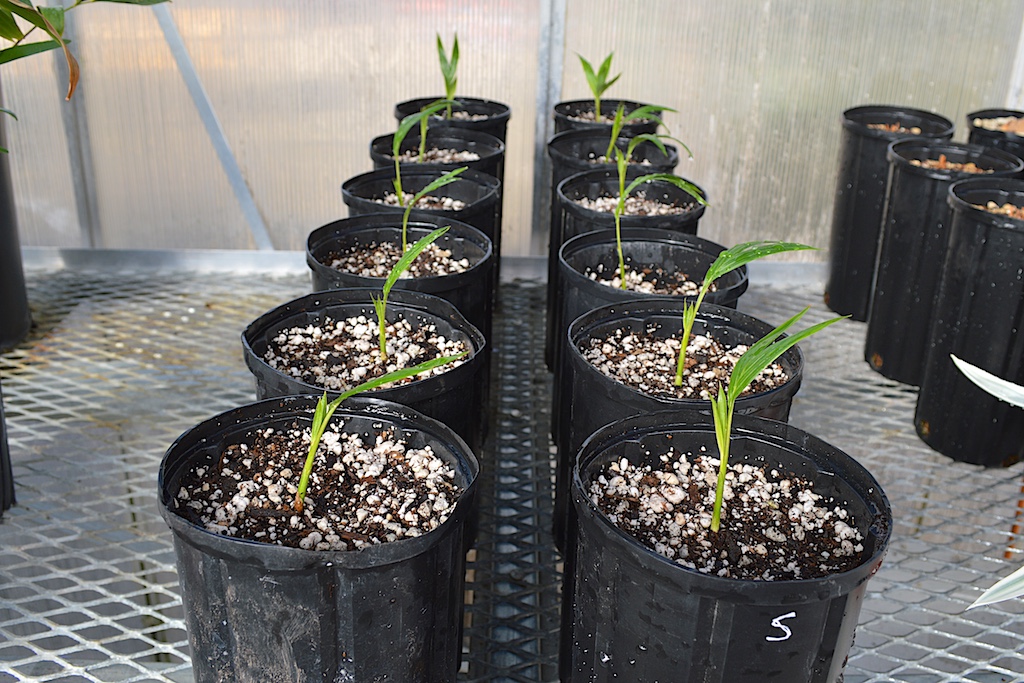 In the beginning of May, the four-month mark, I took a photo to show how my SUPERthrive experiment was progressing. I guess if you stare long enough you might begin to think you see the plants in the SUPERthrive group have undergone ever-so-slightly better growth. However, I called it inconclusive, as nothing jumped out at me enough to document it. 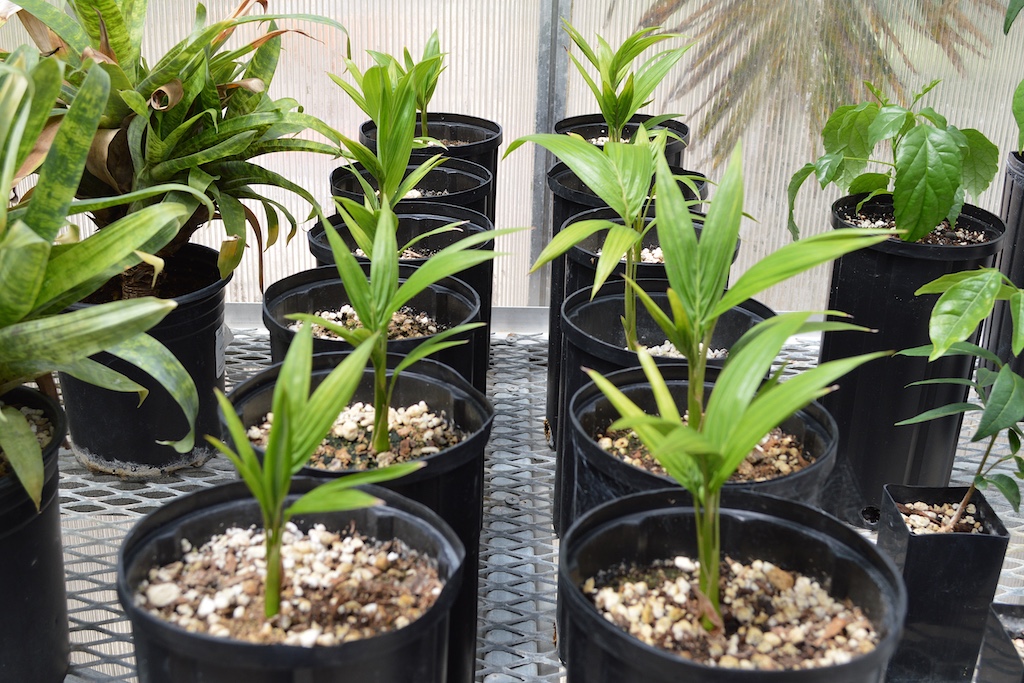 I continued with the same regimented routine over the course of the next seven months. By the beginning of December 2014 the Archontophoenix alexandrae seedlings were ready to be potted up to a larger pot size. So for me it was a great point to conclude my experiment and show the final results. 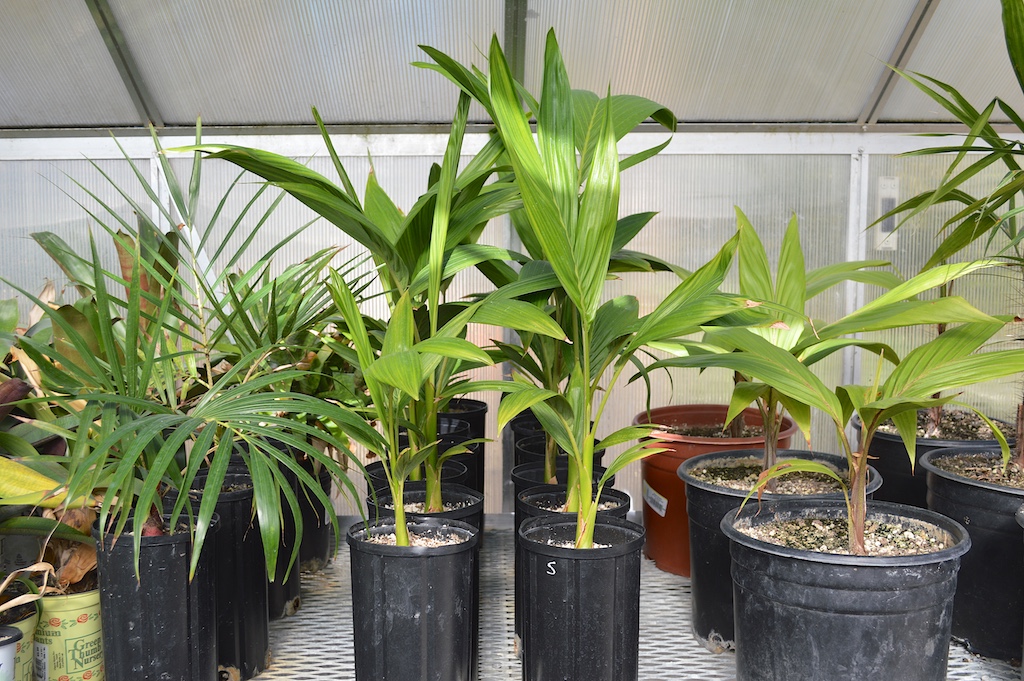 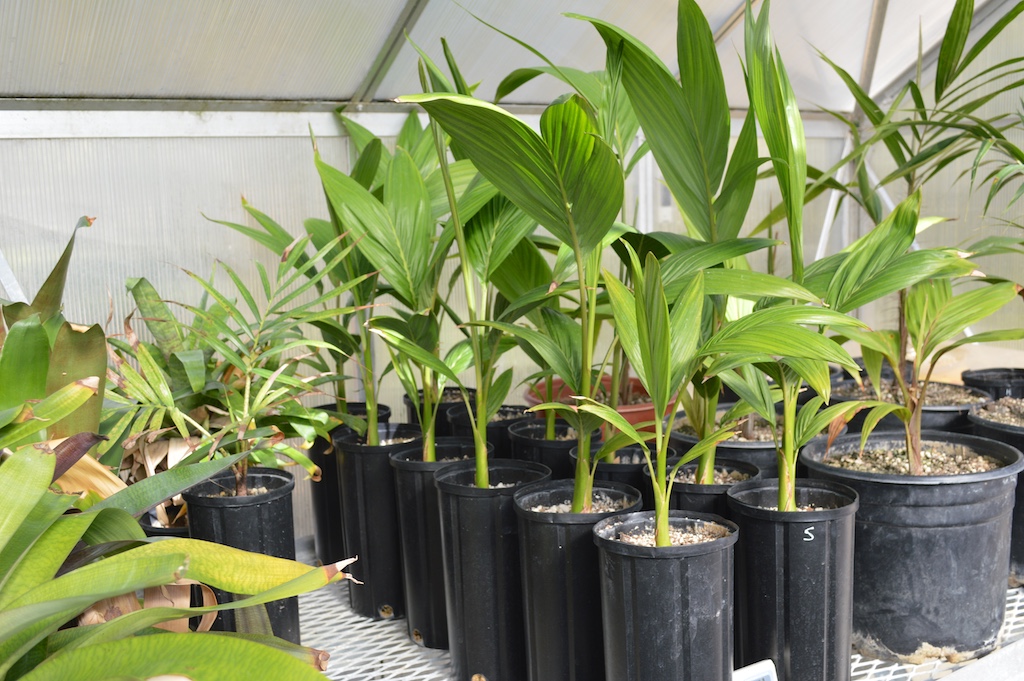 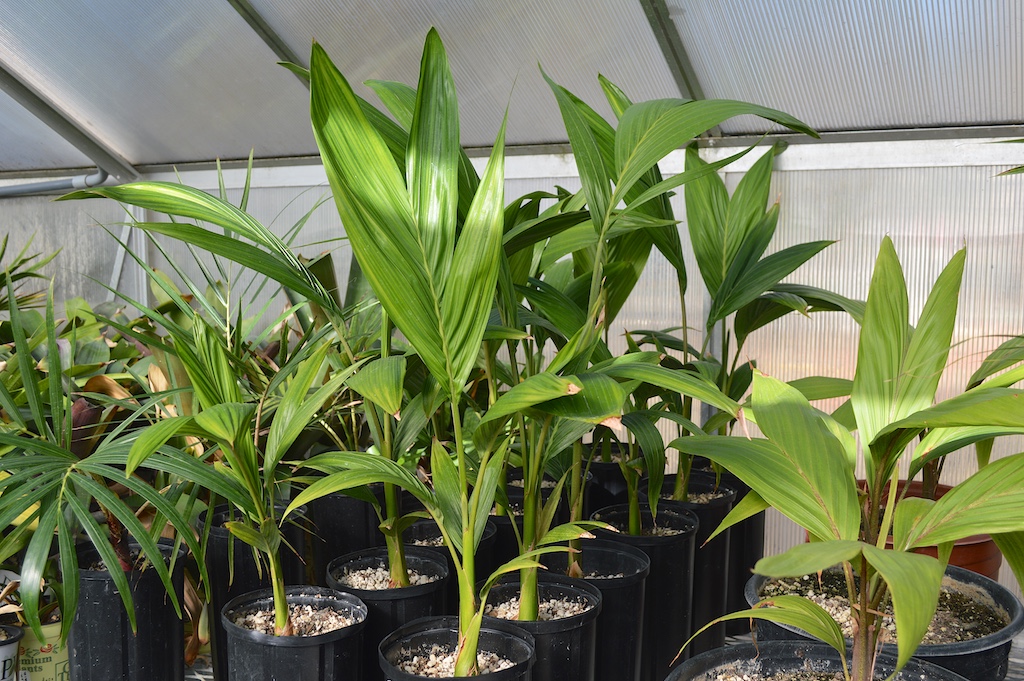 Just as we saw with the four-month results, I didn’t see any convincing difference as a whole between the experiment group or the control after eleven months. Most of the plants grew at the same rate and each was equally healthy in appearance. You will notice that the two plants in the front row show a disparity in size, with the SUPERthrive plant being larger. However, if you look at the last two photos and count four plants back you will see the same thing happened in reverse. A control group plant grew much larger than the SUPERthrive plant. So in the end, it all balanced out. We just believe we found the runts of the litter. This is why ideally it would have been better to use a lot more plants in the experiment. One last thing to point out is that I never had to use any sort of pesticide or fungicide on any plant from either group.

The only conclusion that could be drawn is that properly cultivated Archontophoenix alexandrae will see no growth or health benefits from the use of SUPERthrive as an added supplement.

While I only wanted to test growth and health benefits with my SUPERthrive experiment, an interesting side observation was made and needs to be noted. Earlier I mentioned the breaking of roots while separating the seedlings from the community pot. This is important because as a result of the stress, two seedlings died within ten days of being potted up. Both those seedlings were in the control group which did not receive SUPERthrive. These seedlings were replaced, as I still had some extra available, but it still led to an observation that the vitamin B1, rooting hormone and other ingredients in SUPERthrive really might help alleviate transplant stress.

Recall that SUPER thrive contains the auxin 1-Naphthyl acetic acid (NAA). It is a naturally occurring phytohormone which is generated in the plant’s leaves. NAA signals the roots to grow faster once the plant doesn’t receive the nutrients it requires. A transplant that has suffered root damage given this auxin will trigger root growth quicker. So it could be easily argued that a plant given a boost of NAA could only be beneficial soon after transplantation.

Personally, I have always been a firm believer in SUPERthrive for transplant shock prevention and I use it religiously in this case. I swear by the results and I know that many long-time plant growers do as well. Just as SUPERthrive’s new label has shifted focus to transplant shock treatment, their website reinforces it:

Transplanting can result in what’s called transplant stress, which can negatively affect a tree’s health through loss of leaves and damaged roots. Many trees that experience transplant stress eventually die. Use Superthrive before planting by soaking root balls and afterward by drenching to prevent and treat transplant shock and insure survival.

Now I know there have been studies showing that there is no scientific proof to the benefits of vitamin B1 in transplant shock prevention. I have read many of these studies discrediting vitamin B1 but not one has tested it as a foliar application during transplant, and if they did, frankly, I still wouldn’t take their results over my own experiences. There is just far too much that we don’t understand about plant science to side step anecdotal evidence witnessed by a large group of people, including myself. So while SUPERthrive won’t grow you bigger or healthier plants, for me it is a valuable ally in the battle to keep transplants alive.