It’s about time for a quick update regarding my “Massive Garden Project” I informed readers about two months ago. To be expected, the project was delayed. So for those who were waiting for this garden project update, I apologize. Large-scale projects never start on time and this one was no exception. The concrete guy I was going to use delayed my project for 3 weeks and then informed me he was too busy! Wow, thanks buddy. The next concrete guy was so busy that he threw out some ridiculous quote that was twice what the first guy and the next guy would bid. A friend of mine referred me to a contractor that does it all, including concrete. The timing was perfect, as he was in between two projects. He showed up one Wednesday and gave me a bid a few hours later. He started work last week. The subject of the hardscape work (the sexy stuff) will be done in another garden project update. This blog post will show some changes I had to make to a few planter beds to prepare for the concrete work.

First up is a planter bed that is in the center of my round-a-bout driveway. As it’s focal point it has this beautiful Chamaerops humilis in the center. Below you can see a picture from last year after I pruned the Chamaerops humilis up. I wasn’t a fan of the hedge that went around the palm and wanted rocks and cycads under instead. With rocks coming for other parts of the yard, it was time to update this planter bed too. 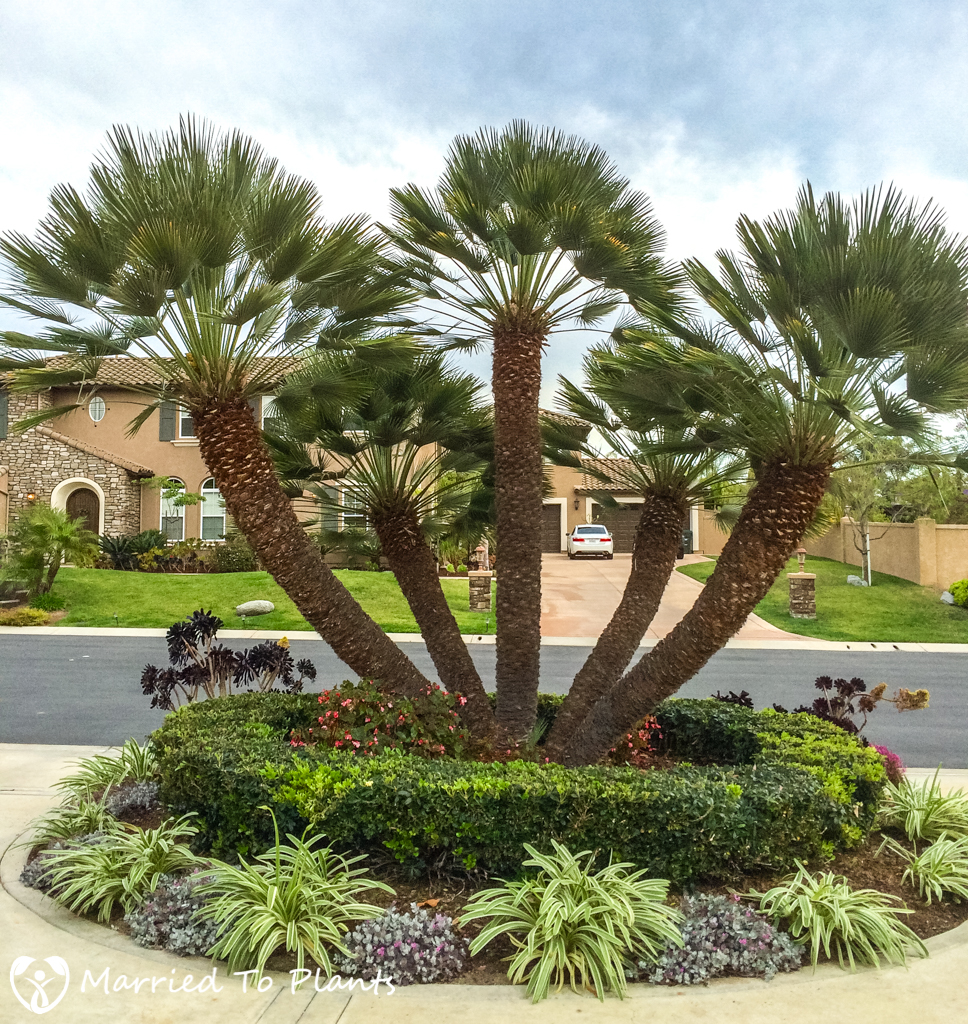 Maybe it’s just me, but I thought the Chamaerops humilis stood out a lot more once the hedges were removed. 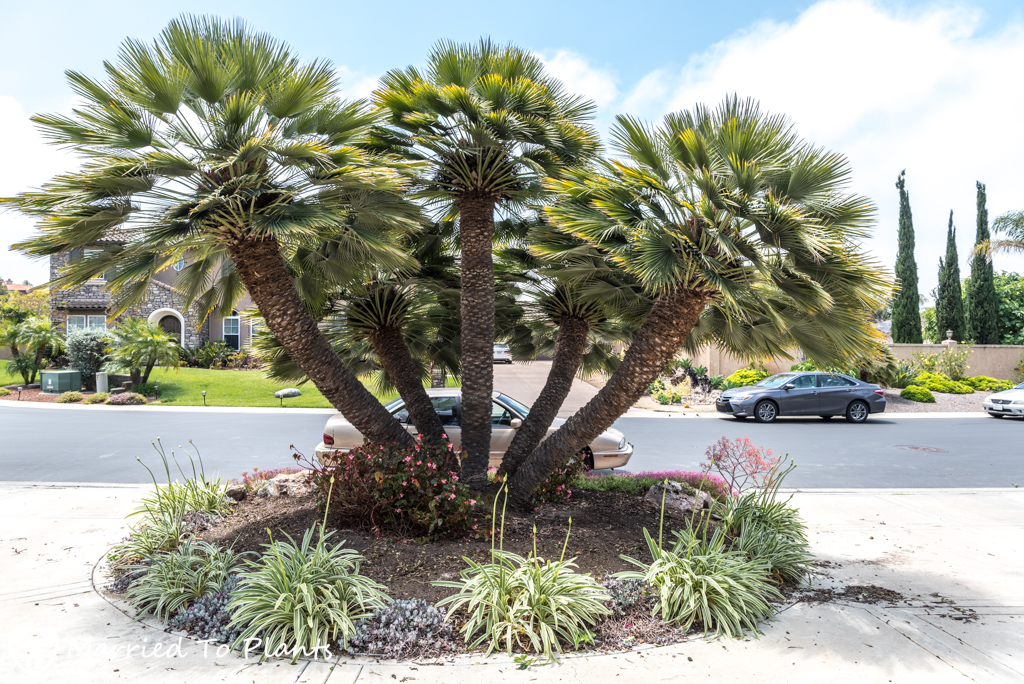 To match the other rocks in my front yard, I bought some more honeycomb quartz boulders. These guys below might look small, but damn were they heavy. 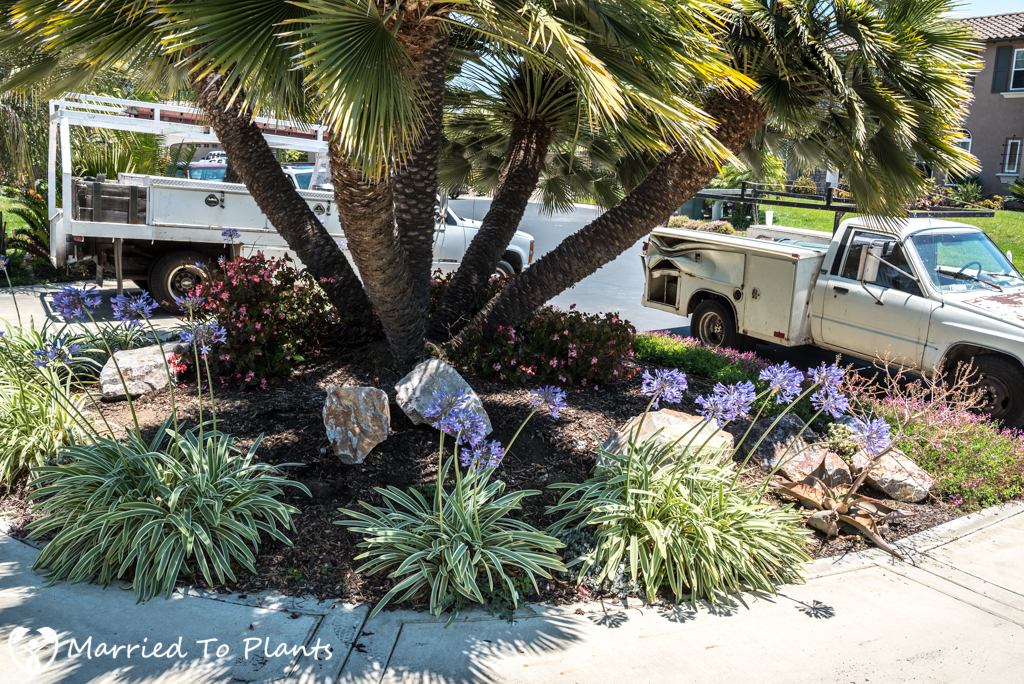 The reason I removed the hedges was so I could plant some cycads under the Chamaerops humilis. It looks a little bare right now, but once these cycads get larger and fill in, it will look much better. I will also add a few small grasses to this planter later. The two cycads below are a Encephalartos sclavoi ‘Blue Form’ at the top and a Encephalartos longifolius x horridus in the foreground. 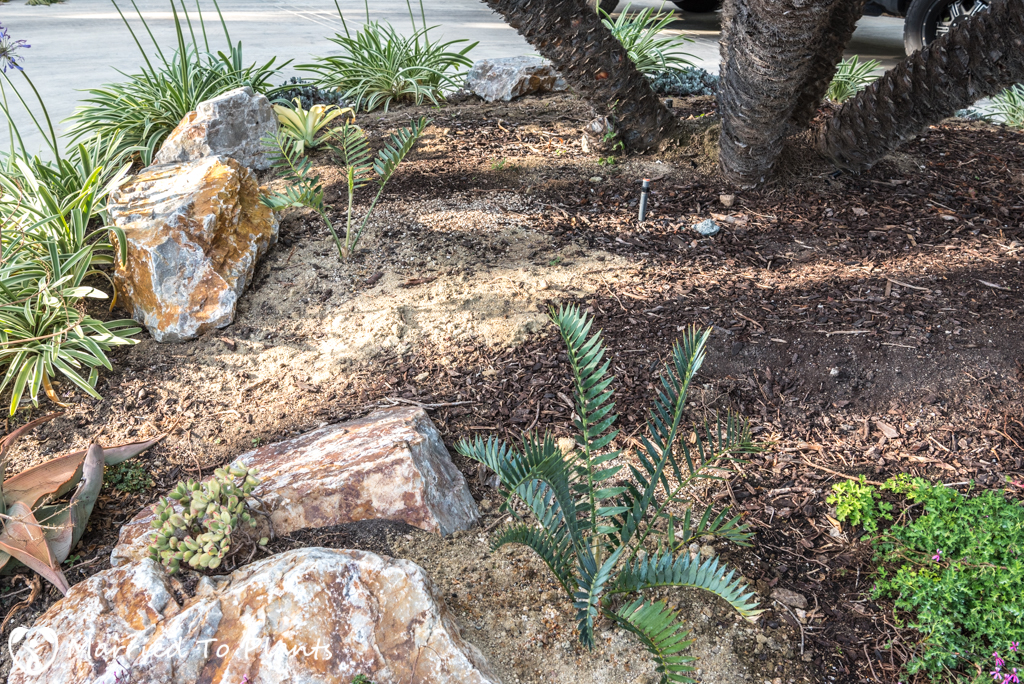 Another hybrid, Cycas revoluta x debaoensis. This is a very fast growing hybrid and can put out 3-4 flushes a year. 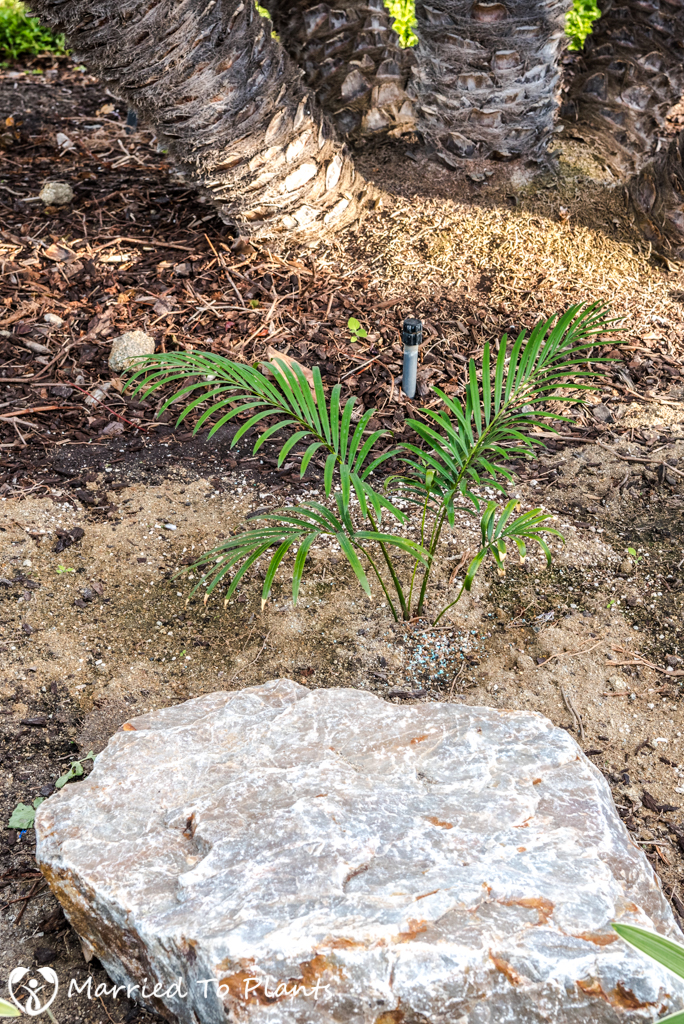 My Encephalartos natalensis ‘Round Leaf Form’ doesn’t look all that good due to it baking in a small pot the last few years. The agave is an Agave ‘Streaker.’ This agave prefers some protection from the sun so it will do great under the canopy of the Chamaerops humilis.

The second area I worked on was a key area by the pool that is home to two challenging palms for me to grow – Hyophorbe verschaffeltii. Looking at the photo below, they are the ones that bookend the steps you see. Each winter they end up looking like this and it was time to remove the ugliest one on the right. The one on the left might make it through the year, as I haven’t found a replacement yet for it.

With the Hyophorbe verschaffeltii removed, I planted a Dypsis leptocheilos (Teddy Bear Palm) that I had sitting in a pot for a few years. It wasn’t looking too good either, but I know once it gets established in the ground it will look great like the others in my garden. I also removed the croton ‘Mammy’ from that bed and replaced it with a much slower-growing croton variety called ‘Trinidad Interrupted Leaf.’ 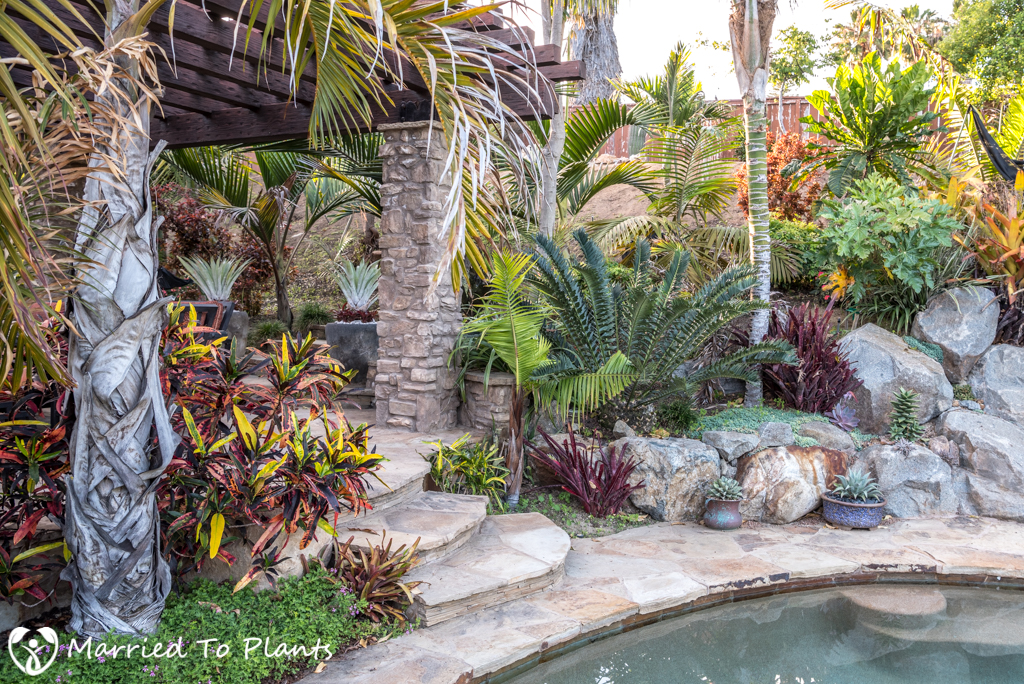 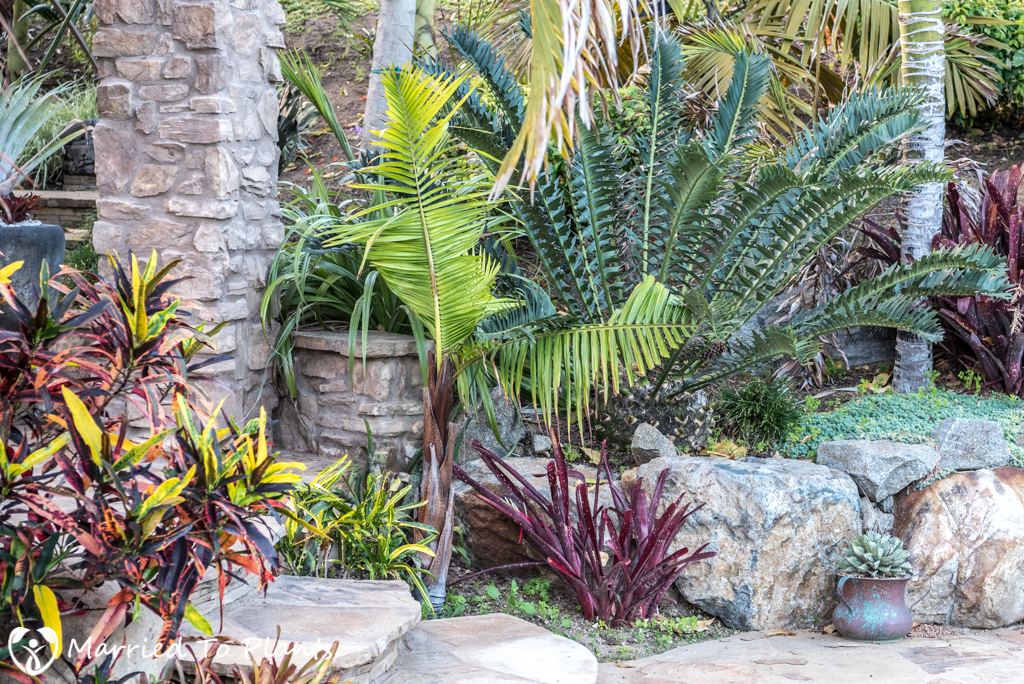 Speaking of palm removal, I also cut down a few other palms in my yard that I didn’t enjoy anymore. I am evil like that. 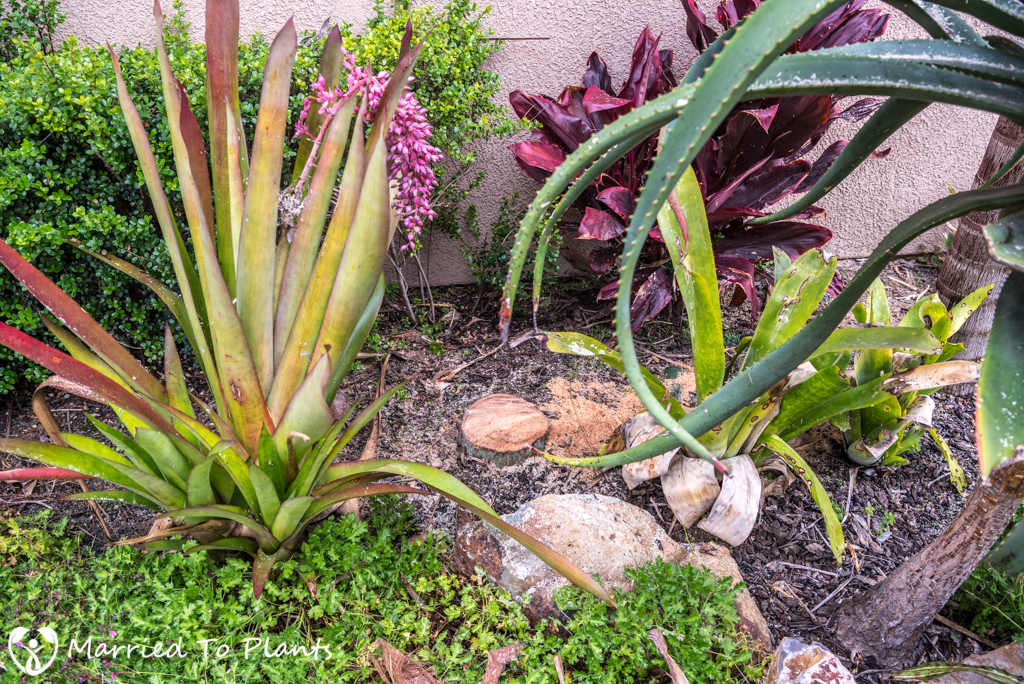 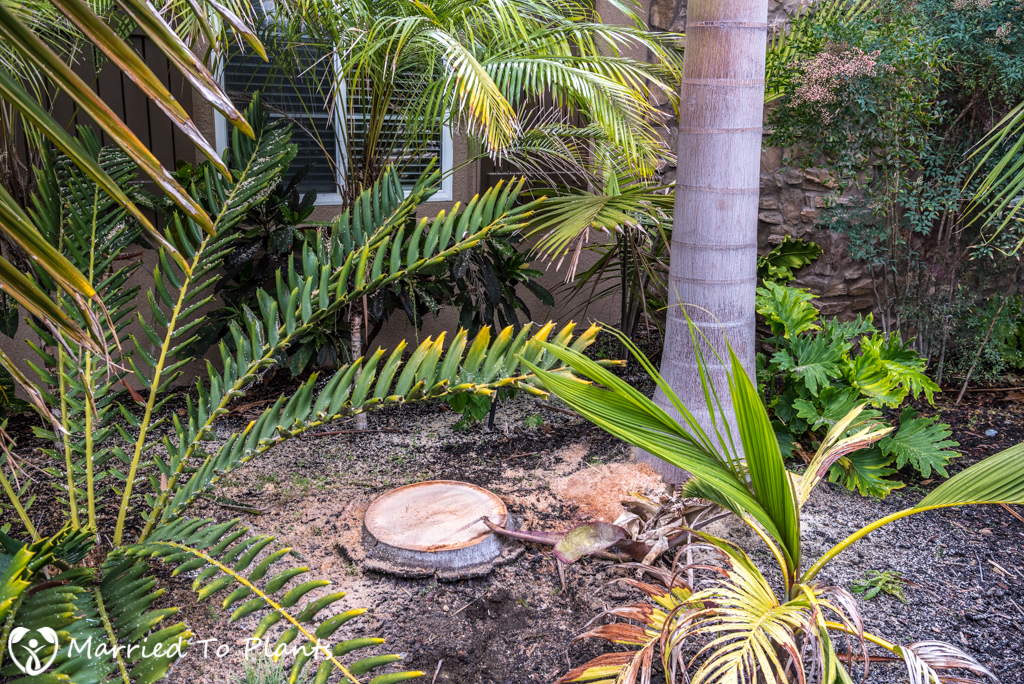 It’s amazing what removing a plant can do for the garden. With the chopping down of a sickly variegated Foxy Lady Palm (Wodyetia x Veitchia) that was always burned in the heat of summer and fall, it freed up my Chamberyronia macrocarpa (Flame Thrower Palm) and my non-variegated Foxy Lady Palm to spread their wings. It is so much less cluttered now. Glad I did it. 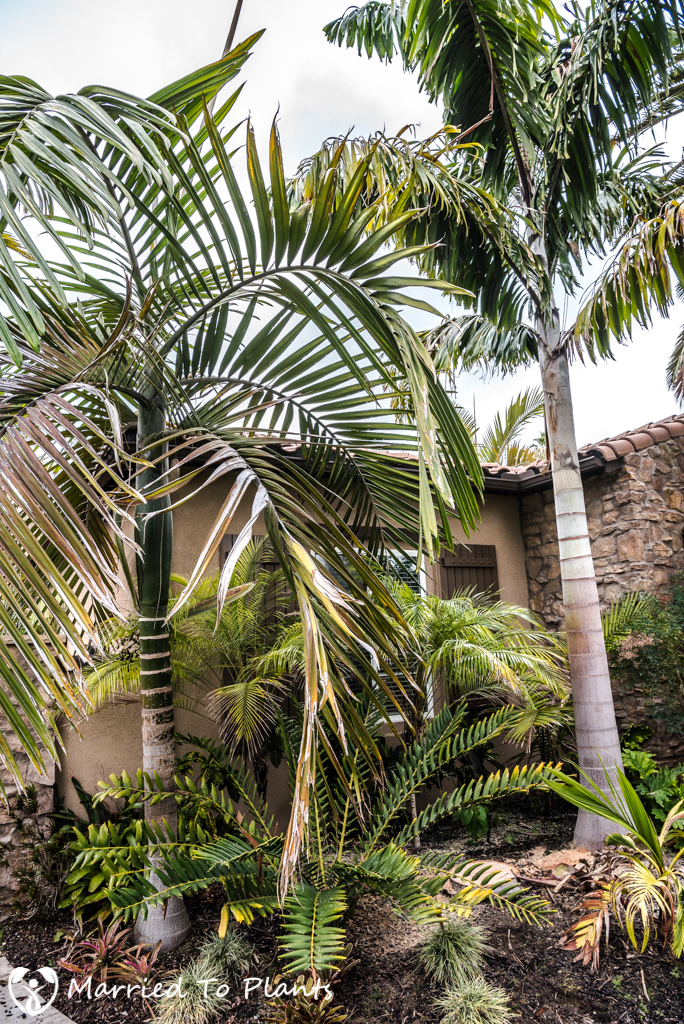 Since I am on the subject of plant removal from my yard, I figured I would share some photos showing just how much plant material was removed from my garden this spring. Large-scale plant removal work like this happens once a year. The difference is that this year required two dump truck runs to the green waste center. So do you still want a bigger garden?

Now for two major planter bed changes that highlight this garden project update. After 10 years of hounding me, my wife finally convinced me it was worth it to put in LaCantina bifold doors in our living room. The tough part for me (outside the cost) was that I had to remove two beautiful palm trees that were being grown to perfection. (Thank you very much.) The palm tree you see on the left is a Cryosophila stauracantha and the larger fan palm on the right is a Licuala ramsayi. While the Cryosophila stauracantha is a somewhat quick grower, the Licuala ramsayi is very slow. I hate moving happy, slow palms. There is a really good chance it wouldn’t survive a transplant. But alas. Wife 1, Licuala ramsayi 0. It had to be moved. 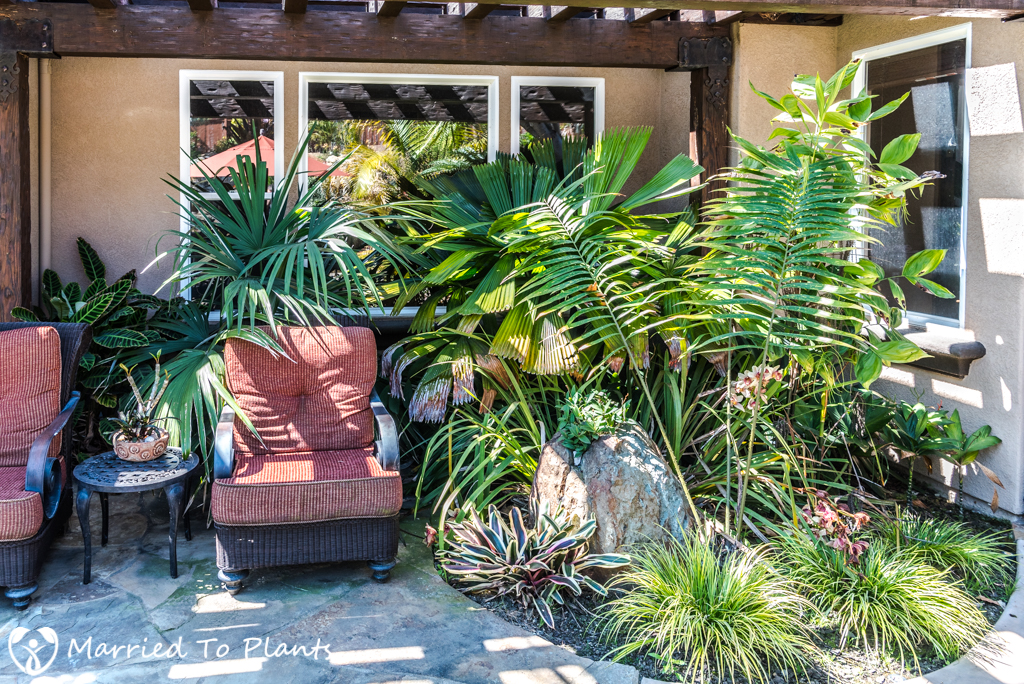 And…poof. They are gone. You can see the bank of windows that will be turned into doors soon. In a later update on the concrete work I will show how we extended the flagstone and moved that large boulder. 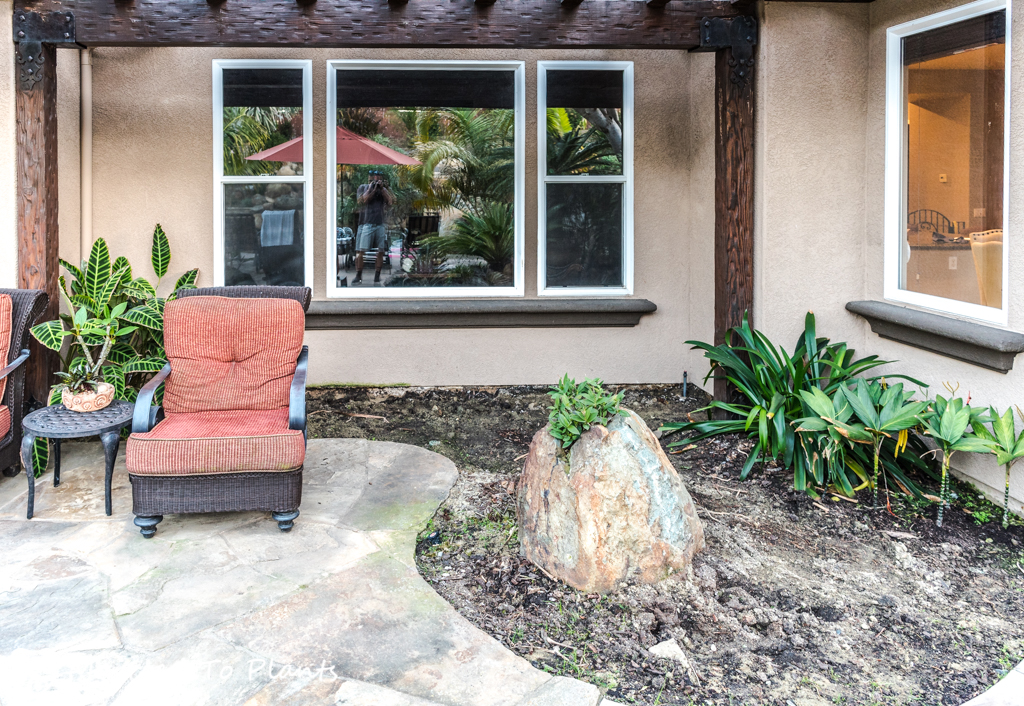 The Cryosophila stauracantha went up into the only shady area of the garden in which I still have room to plant something. It handled the transplant with ease and has grown a lot the last few weeks. The second photo below shows the white mark on the spear where I marked it at the growing point. It has grown over 6 inches so far. Meaning it didn’t have any real setback. 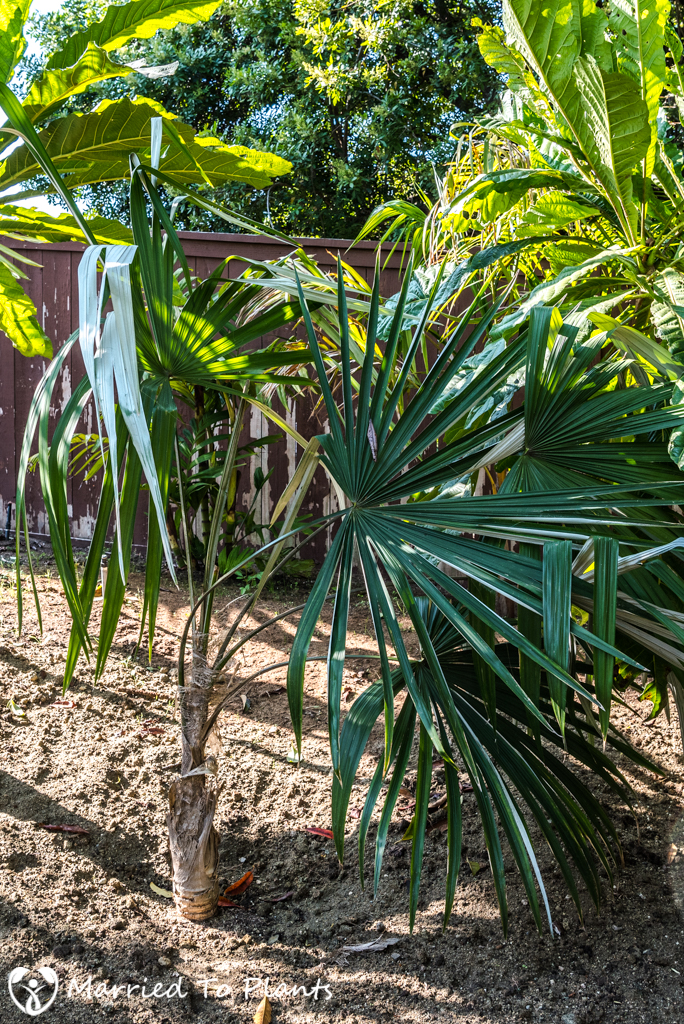 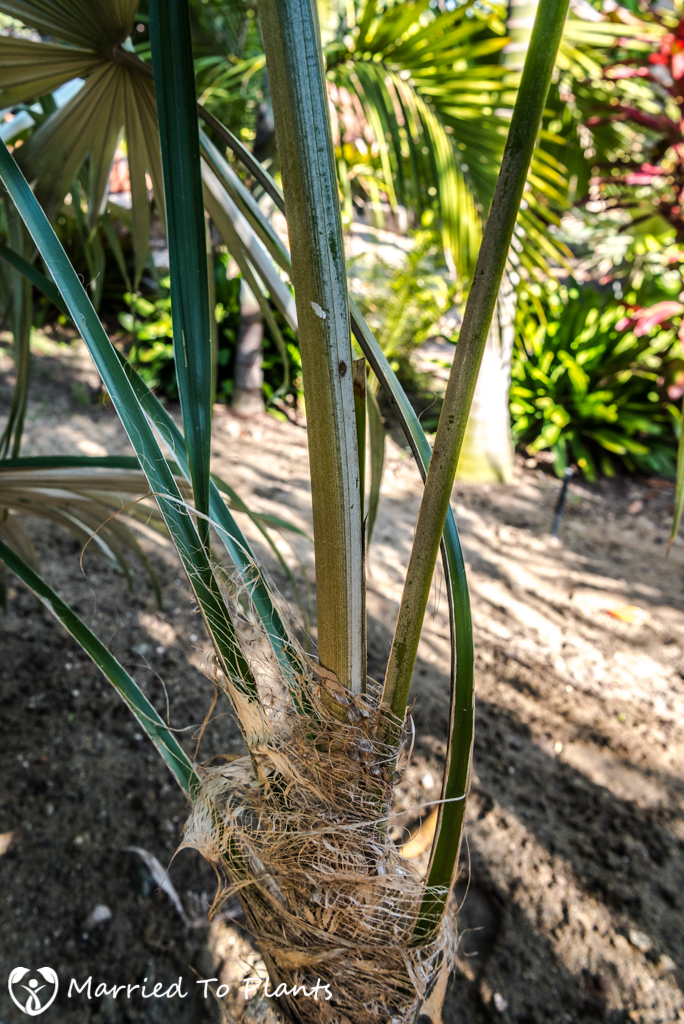 The Licuala ramsayi would need to go into a much better location. Thanks to good timing, I had a planter that needed to be cleaned up due to a dying Dypsis decaryii. I also have a Licuala peltata var. sumawongii growing in this planter bed. Both Licuala are roughly the same size and have the same cultural requirements. This planter bed was the perfect future home. I just had to remove the Dypsis decaryii and the overgrown Schefflera arboricola ‘Variegata.’ 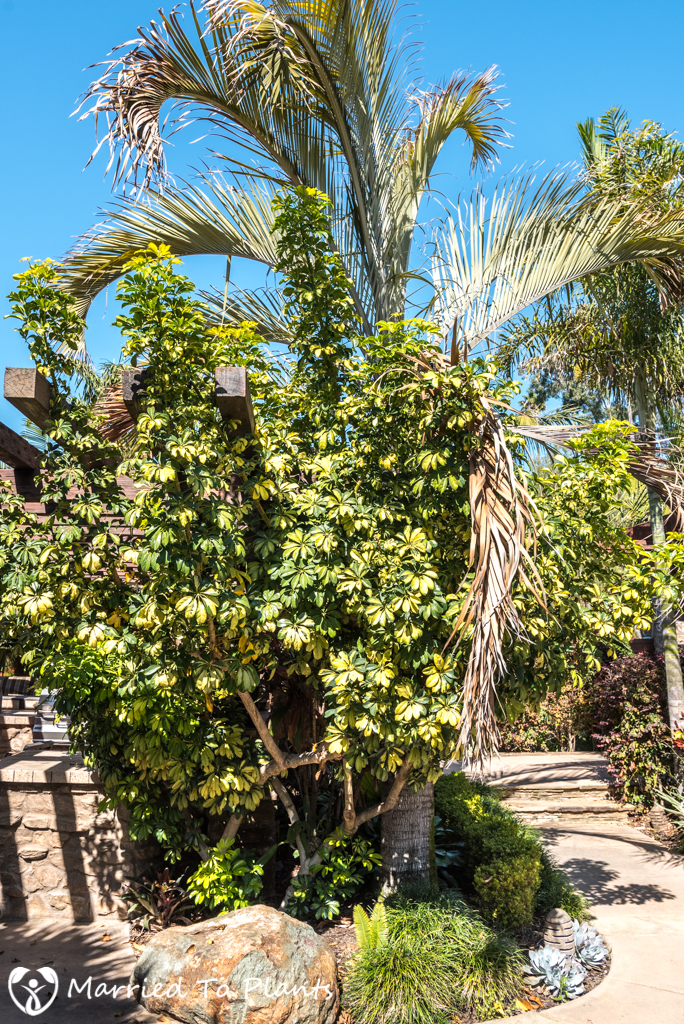 It is surprising how fast you can cut out a large palm with a chainsaw. 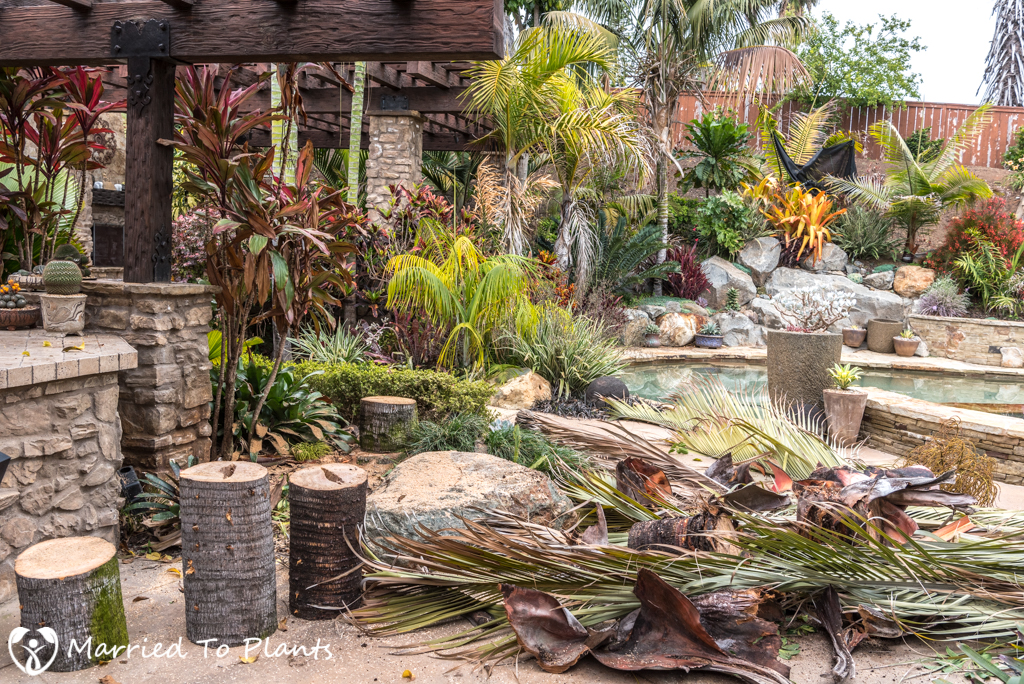 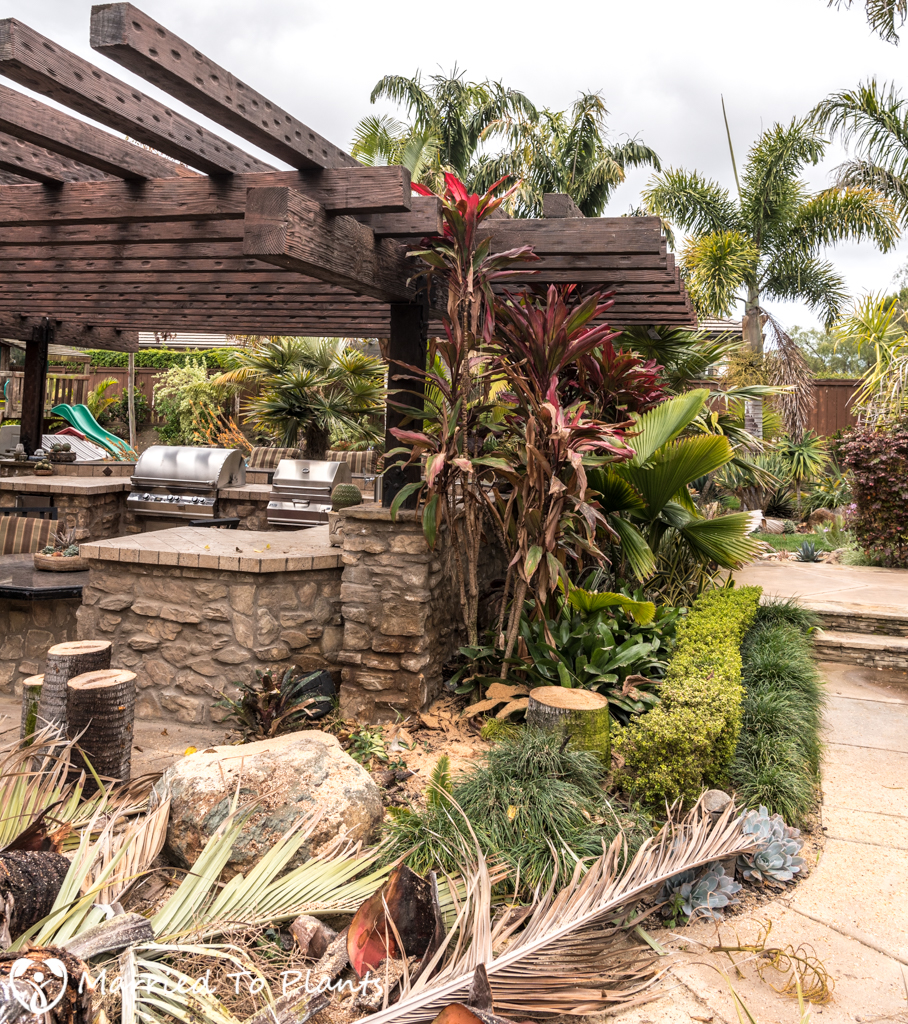 After I removed all the fronds and truck slices, I used a stump grinder to clean up the palm roots so I could plant another palm in its place. Hacking through a mass of palm roots is a pain in the butt, so using a stump grinder makes your life much easier. After all this was done, the planter bed looked like nothing ever went missing. 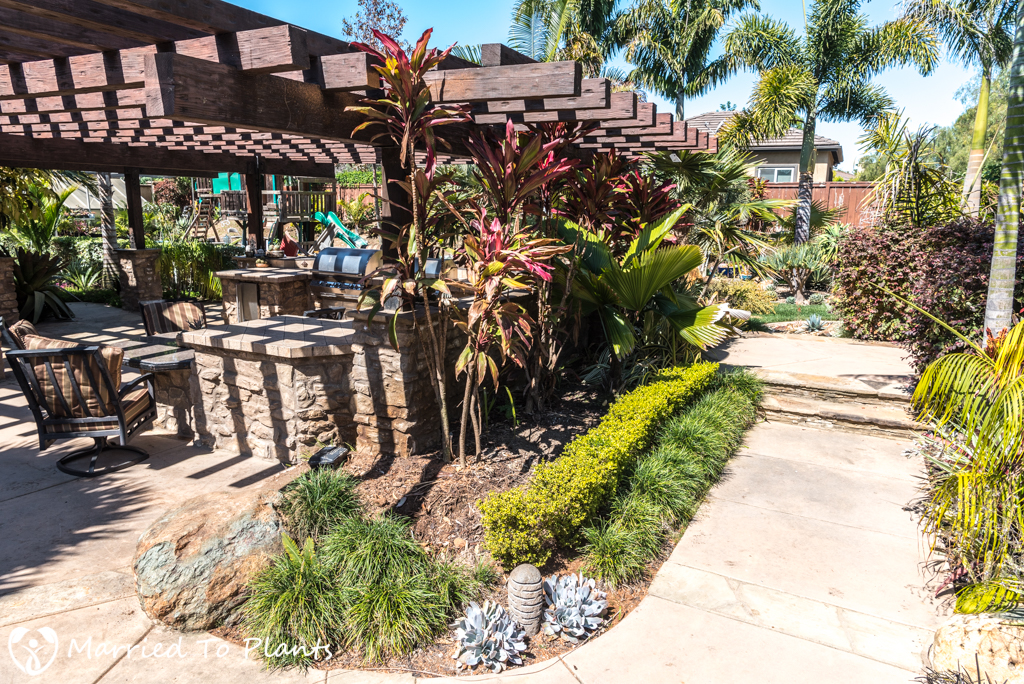 Time to plant the Licuala ramsayi. Surprisingly, it didn’t have a large root mass so the transplant went fairly easy. 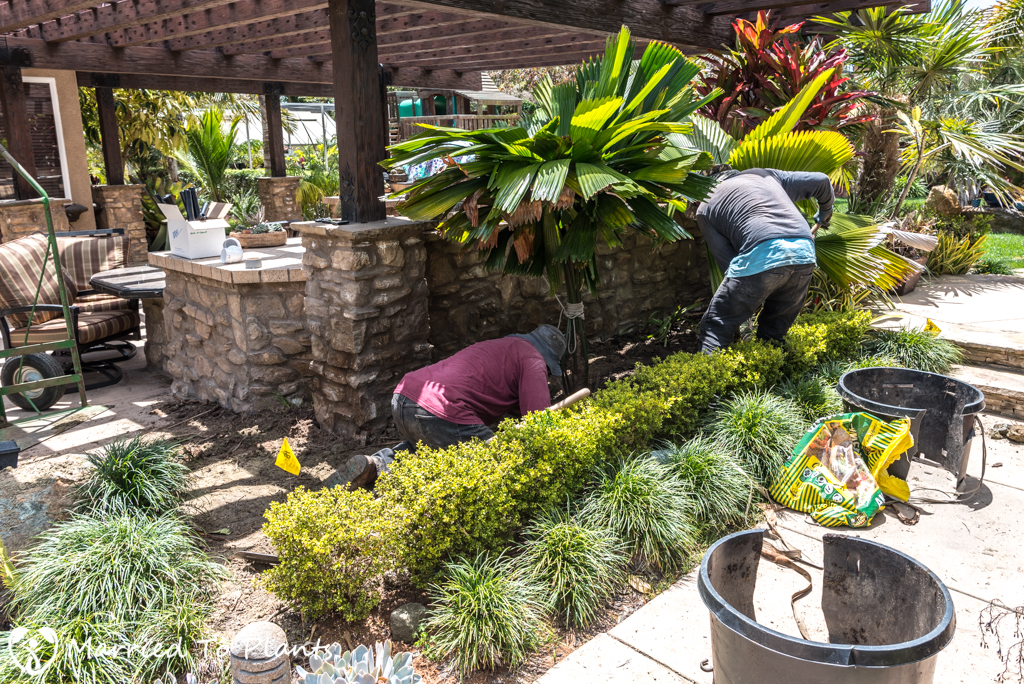 After we finished planting it and untied the fronds, it made for a very impressive sight. The Licuala ramsayi (on left) and the Licuala peltata var. sumawongii (on right) were a perfect match. I had been growing both palm trees for 10 years now and they grew at about the same rate. Hopefully this will continue. 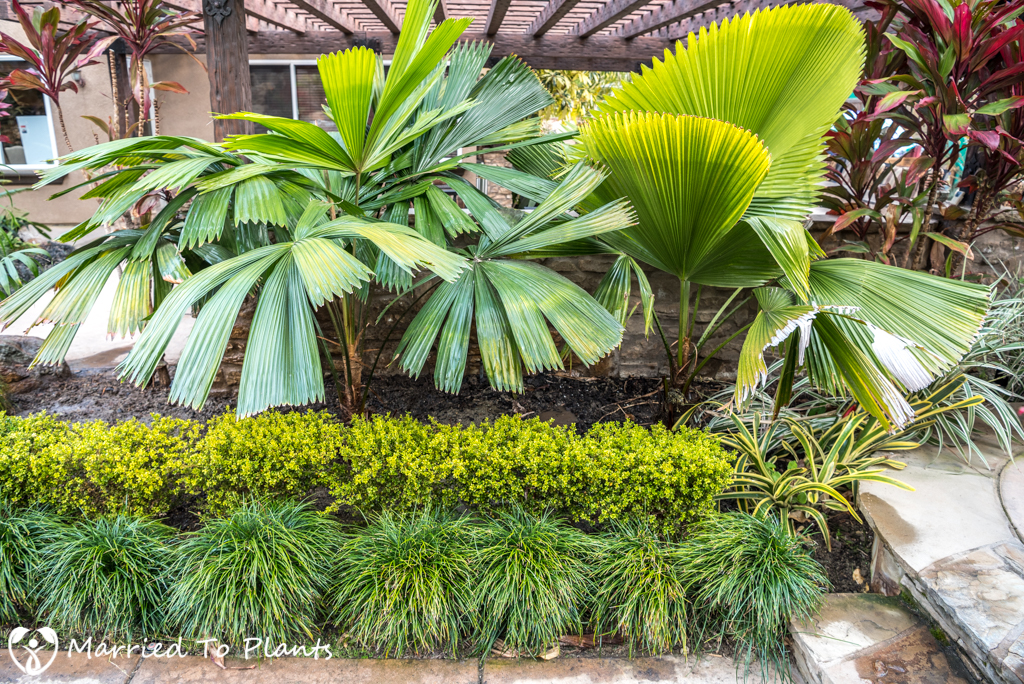 To finish up the planting I moved the Ti plant in order to give the Licuala ramsayi more room and I planted a Roystonea princeps. I needed a larger-trunked palm that grew quickly to punch through the pergola. Roystonea princeps will do this for me. 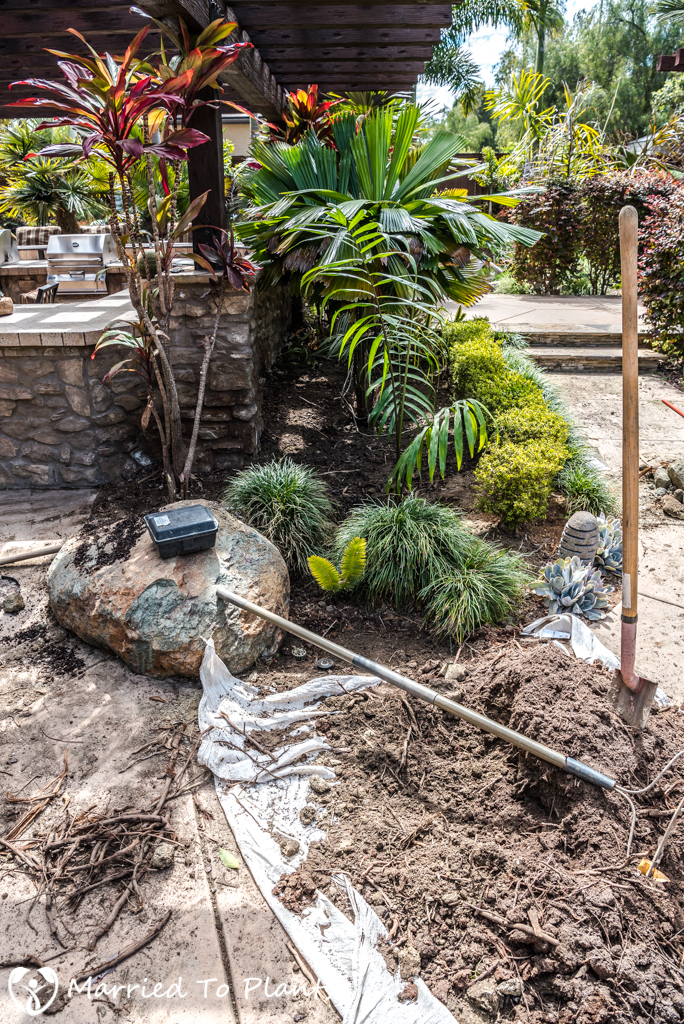 Here it is all cleaned up. Those two little succulents by the lave stone light are some variegated Graptoveria ‘Fred Ives’ I bought off a seller on Facebook.

That’s it for this garden project update. Next week I will have my second post in the series.