You just know when something isn’t right with a plant. It is almost a sixth sense. One day while walking the garden I noticed one of my Foxy Lady Palm’s (Wodyetia x Veitchia) was browning on the lower two fronds. I have found this to be the result of one of two things: 1) The plant is flowering and dropping its older fronds; 2) The plant has a disease. Since my palm was not at the flowering size yet, I had a funny feeling it had a fungus. I started treating with fungicide that day.

About a week later I noticed a third leaf was browning. Even though the palm showed no other symptoms of a fungal attack at that time, I knew it wasn’t a good sign. The only thing to do was continue to treat it with various fungicides and hope it recovered.

Another fews weeks passed and upon closer inspection I noticed something that I have never witnessed before. The trunk of the palm tree had a few spots where sap was draining out. As the days passed, more spots appeared like the one seen below. 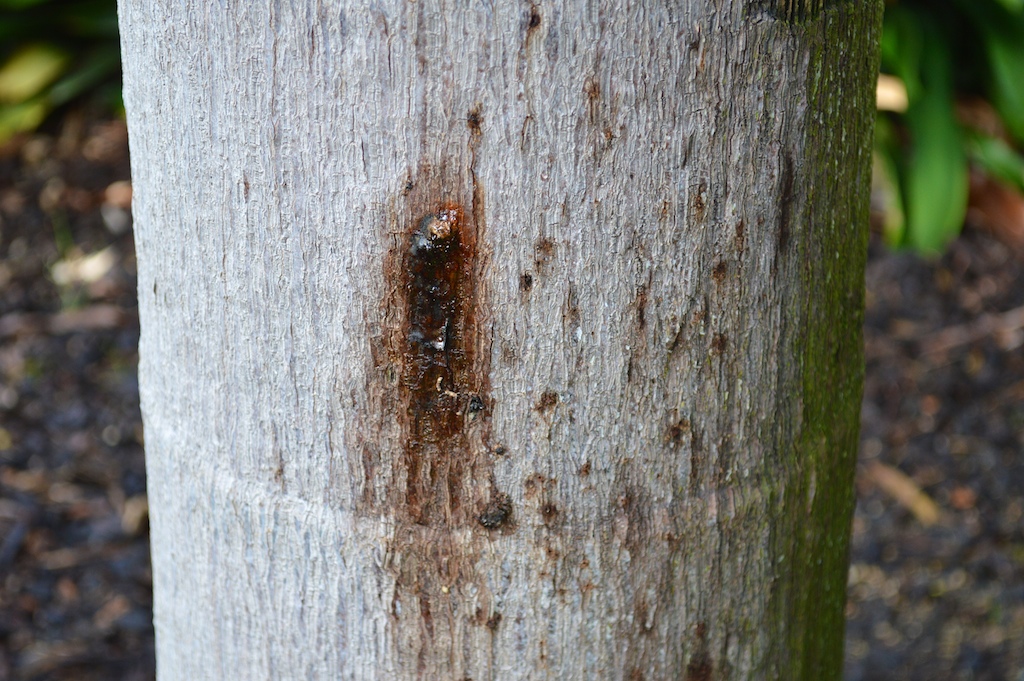 In doing a little research online, the only thing I could come up with was a fungus that I thought was more tropical in nature. Over the next few days a few close friends and long-time palm growers stopped by and looked over the palm. One of my friends has close to 40 years of experience growing palms in California and stated he had never seen a bleeding trunk like what my Foxy Lady Palm was displaying. I knew I was running out of time, so I decided to submit my questions through an iPhone App someone recommended. I downloaded the free “Plant Doctor” app to my phone and followed the easy step-by-step process to request a diagnosis. 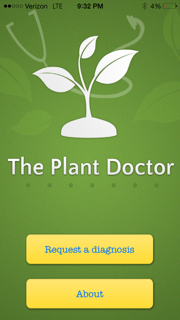 During my rudimentary online research to find out what was infecting my palm, this was of course the same fungus I came up with. However, it is something usually found in Hawaii or Florida, not California—or so I thought. Then how did my palm become infected with this disease? I did purchase the palm from a nursery that shipped these in from Hawaii via an ocean container. Did the fungus patiently sit and wait for six years to attack the palm? In its asexual stage, the spores can live in the soil for decades. So that was certainly a possibility. But I needed to know more. So I did a little more detailed research online and it turns out that in Southern California, Thielaviopsis paradoxa has affected Canary Island Date Palms. It can cause interior trunk decay—better known as “Sudden Crown Drop” here. Now while research hasn’t established Thielaviopsis paradoxa as the only reason for the condition, tests have confirmed that Thielaviopsis paradoxa is present in dead Canary Palms with Sudden Crown Drop. So the fungus does in fact exist here and is more common than I would have guessed.

OK, so how is one so lucky as to have a palm infected with Stem Bleeding Rot, you ask? The University of Florida’s IFAS Extension website tells the following:

“Wounds can occur naturally, such as trunk cracks due to excess water uptake. Insects (such as ambrosia beetles), birds (sapsuckers pounding on the trunk), rats, and other mammals can cause wounds. Blowing objects during a wind storm can strike a trunk and cause a fresh wound.”

Knowing that there was no effective treatment or cure for Thielaviopsis paradoxa, I scheduled the palm to be removed. In the twelve days it took the tree removal guys to come out, the palm went downhill quite rapidly, as seen below. Also, notice how skinny the top of the trunk is by the crownshaft? This tells you the palm had been infected for quite some time. 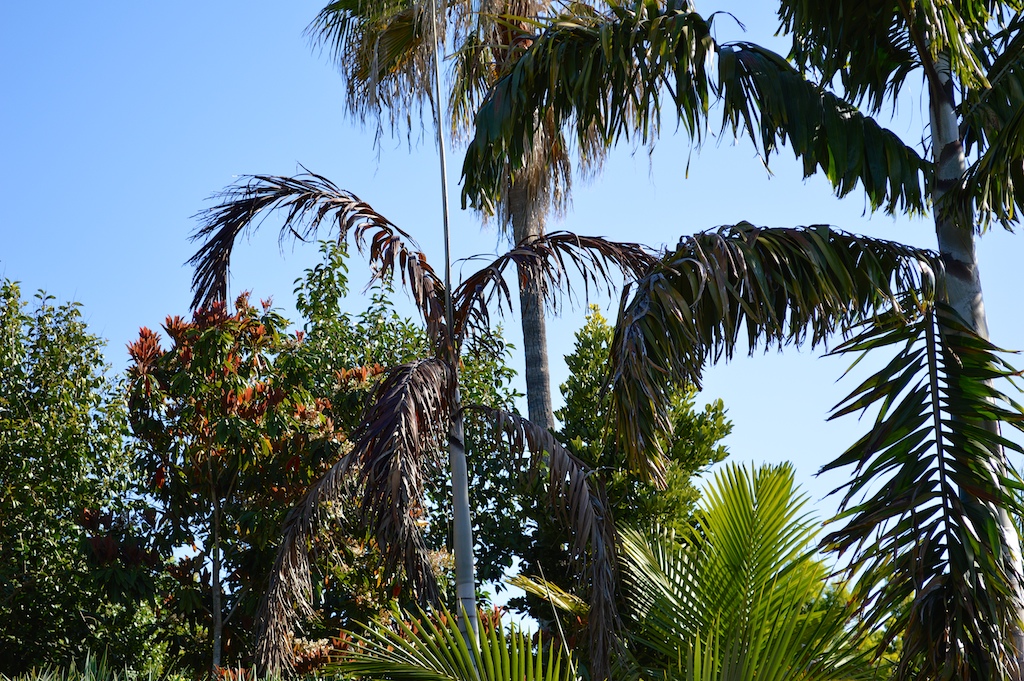 Looking at the bottom of the trunk you can see it was well stained from the sap running down it. 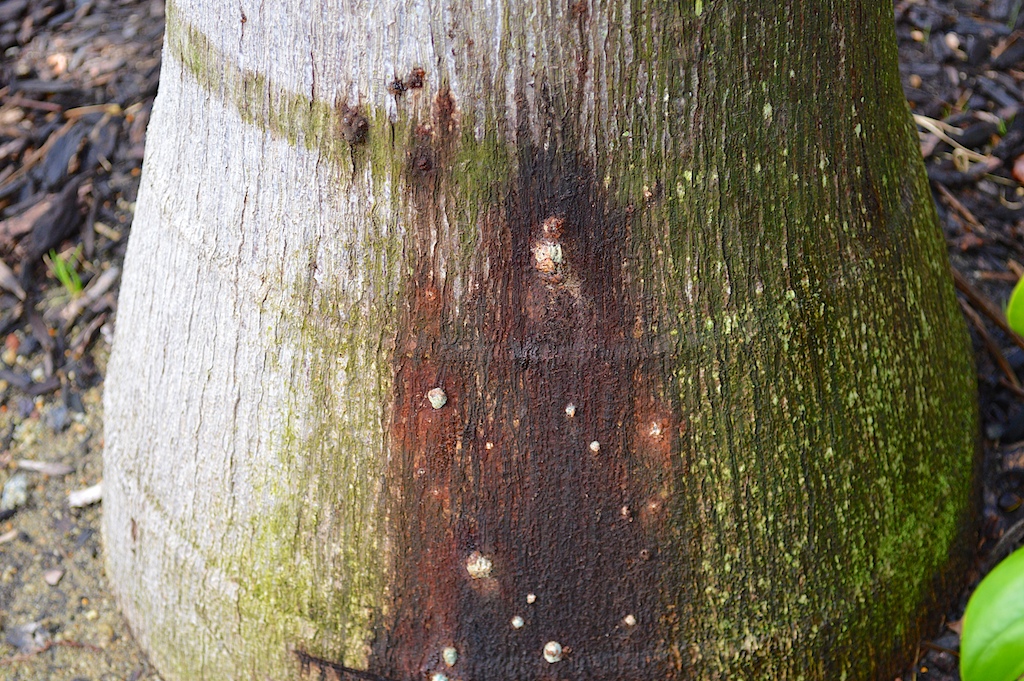 The base of the trunk once the tree was chainsawed down shows just how far the fungus had moved into the heart of the trunk. A healthy palm trunk will be mostly white when freshly cut. Here you can see all the dead areas where the fungus was present. 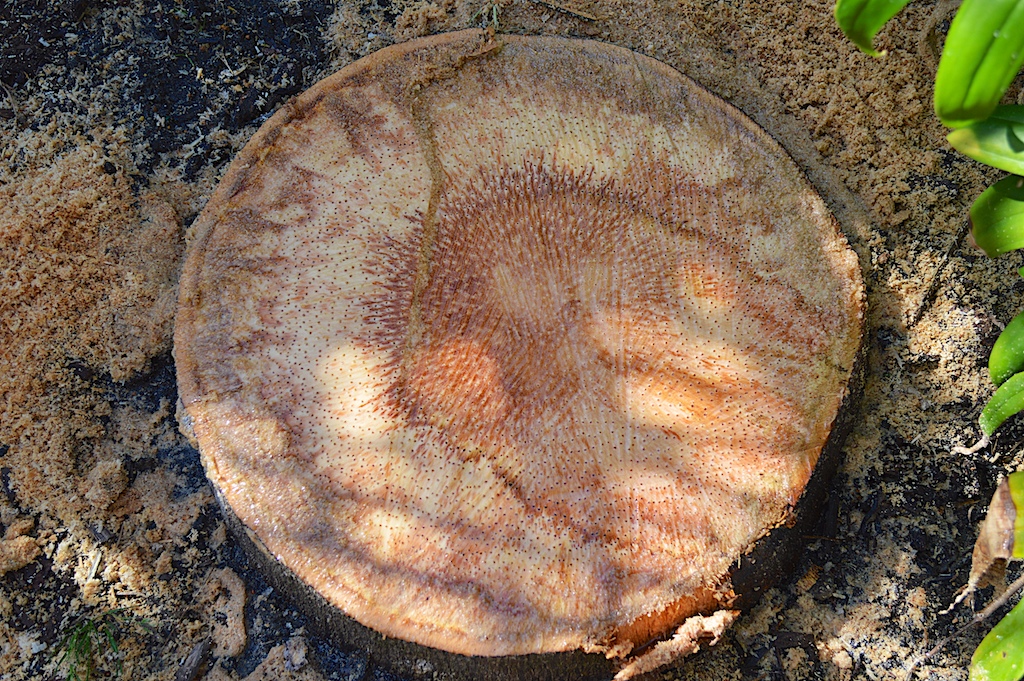 Below, you can even a few feet up the trunk that the fungus was abundantly present. 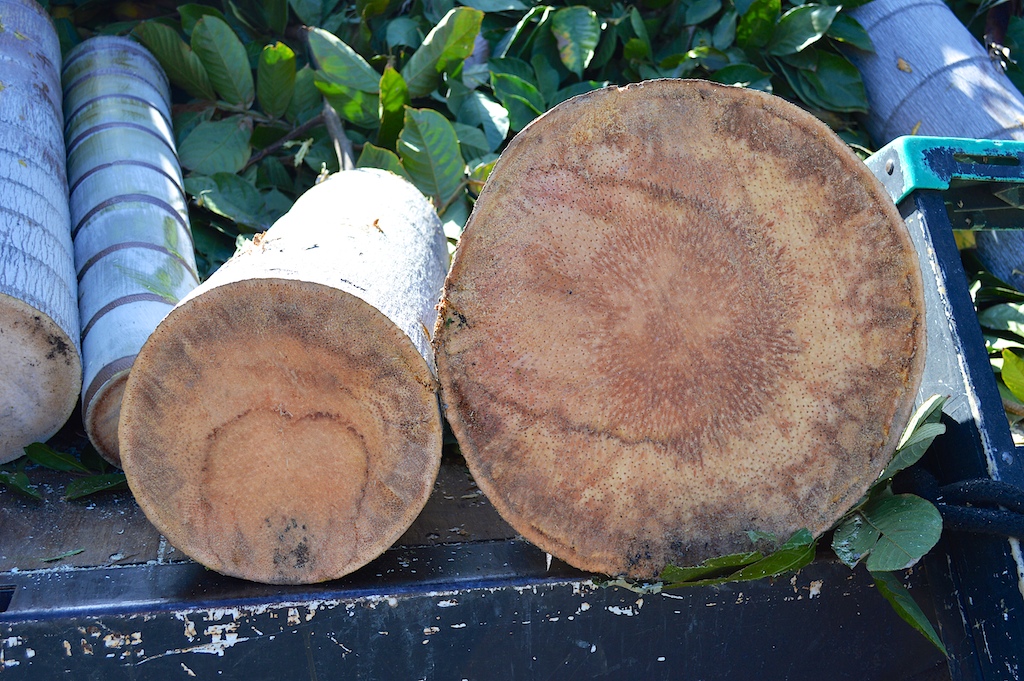