This past weekend my daughter had a soccer tournament at Coronado. Chance would have it that a family not big on mornings would get starting game times of 8 AM on Saturday and Sunday. With the coach’s requirement to be at the game 1 hour prior, that would mean a 5 AM wakeup to get to Coronado on time. My wife’s solution? Spend a lot of money and stay at a historic landmark—the Hotel del Coronado. 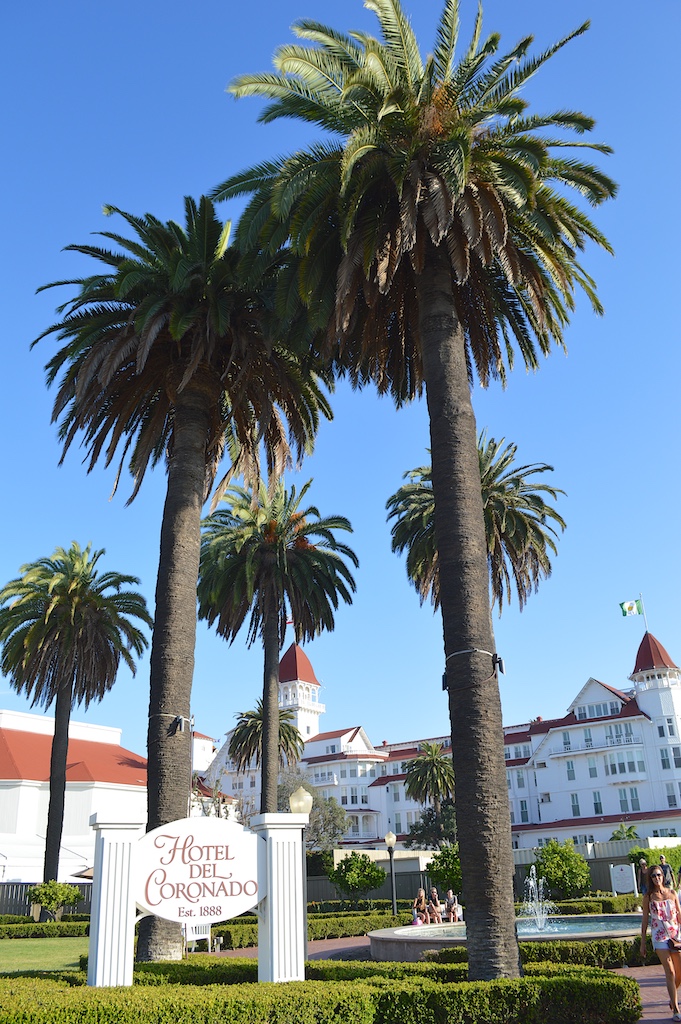 I was actually glad my wife suggested the Hotel del Coronado because it has a lot of great plants that I wanted to check back in on since my last visit almost 5 years ago (selfish, I know). Not to mention the scenery has brought admiration from around the world for well over a hundred years now.

The history of the Hotel del Coronado is interesting and must be shared for those that don’t know it or perhaps might be reading my blog post from outside the USA. Way back on December 19, 1880, three people got together and purchased all of Coronado and North Island for $110,000. Below is what Coronado and North Island looked like back in 1918. The red dot is where Hotel del Coronado is located now. I can’t even begin to imagine the number of billions of dollars this land is now worth.

I bet most San Diegans didn’t even know it once looked like this and that the “Spanish Bight” once divided Coronado and North Island.  The development of North Island by the United States Navy changed all that and by July 1944 the bight was filled in, combining the two land areas into the single body we know it as today.

The actual hotel itself was completed in 1888 and for almost 130 years has entertained guests that have included presidents, movie stars and famous sporting figures. The Hotel del Coronado’s fascinating history includes it being recognized as a National Historic Landmark in 1977. These Canary Island Date Palms (Phoenix canariensis) were most likely planted not long after the hotel first opened. 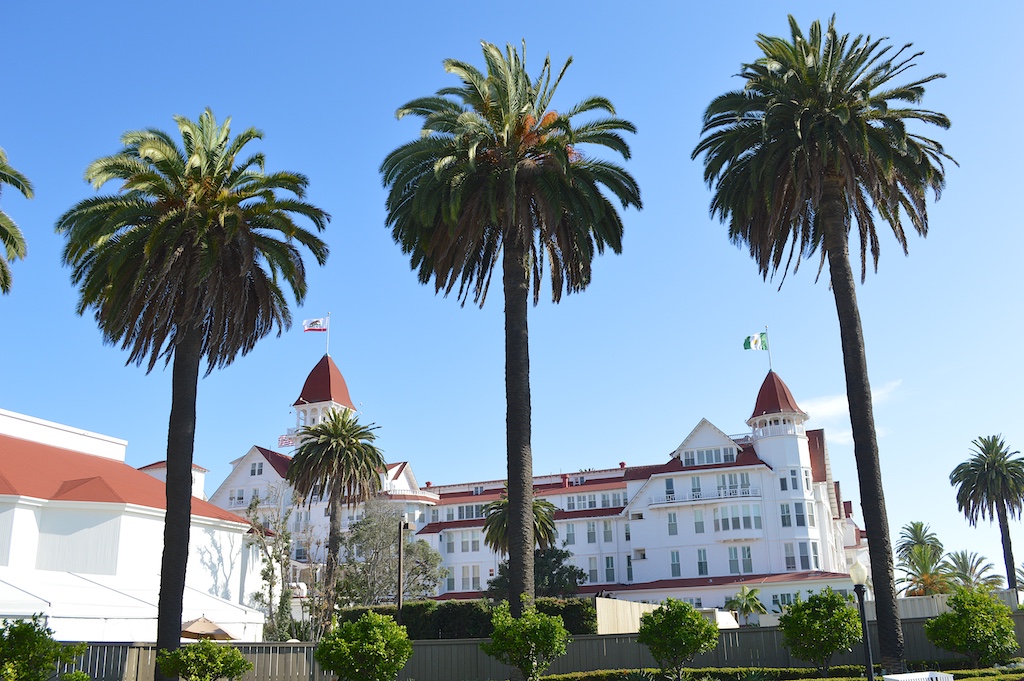 Along with its unique history, the Hotel del Coronado can also boast one of the largest sandy beaches in Southern California. Some of it is still private to this day. 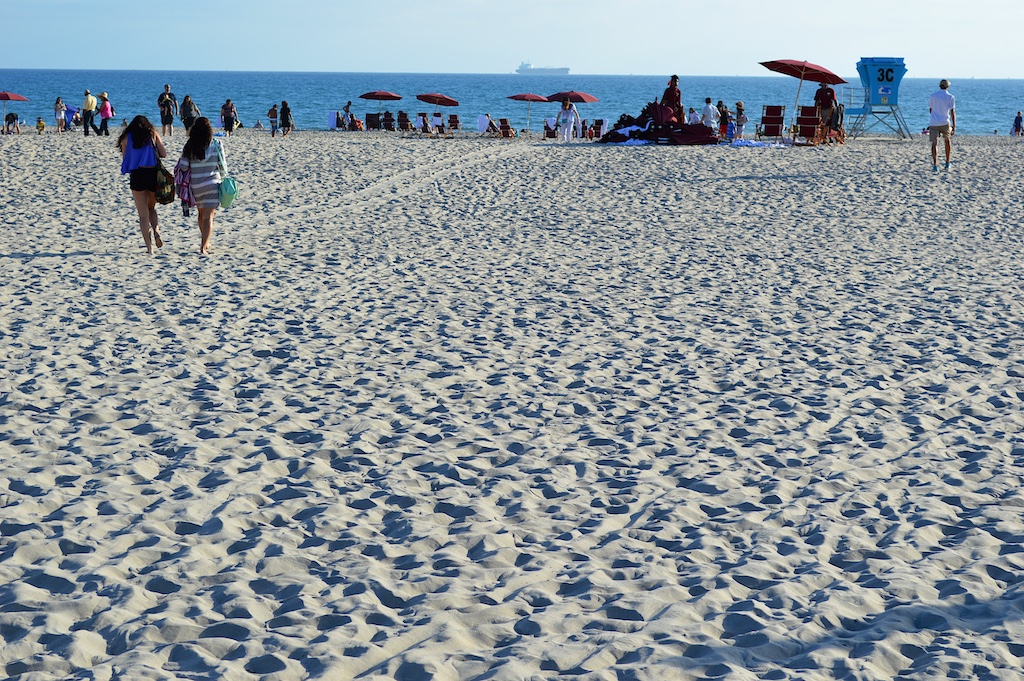 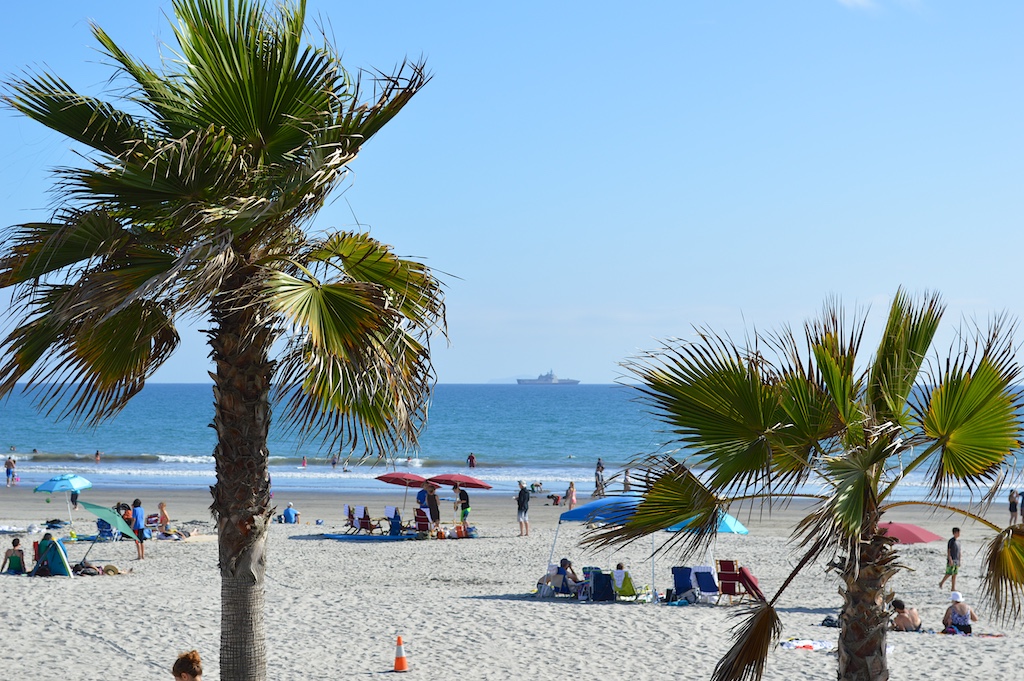 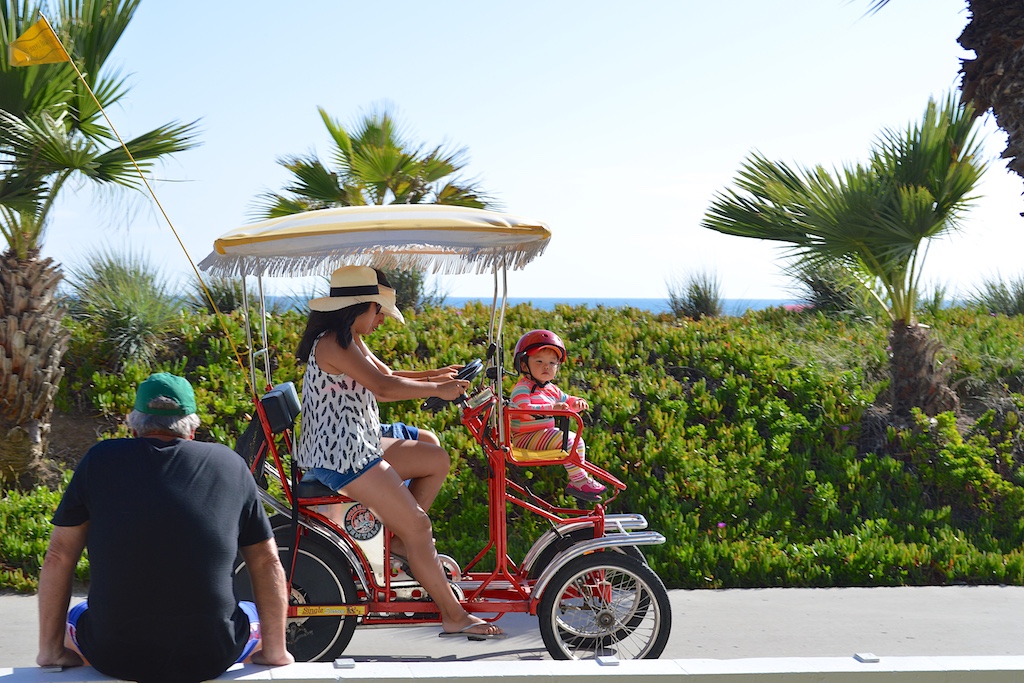 While not what many of the luxury resorts are today, the Hotel del Coronado still brings in the high rollers. Guess which one is mine? 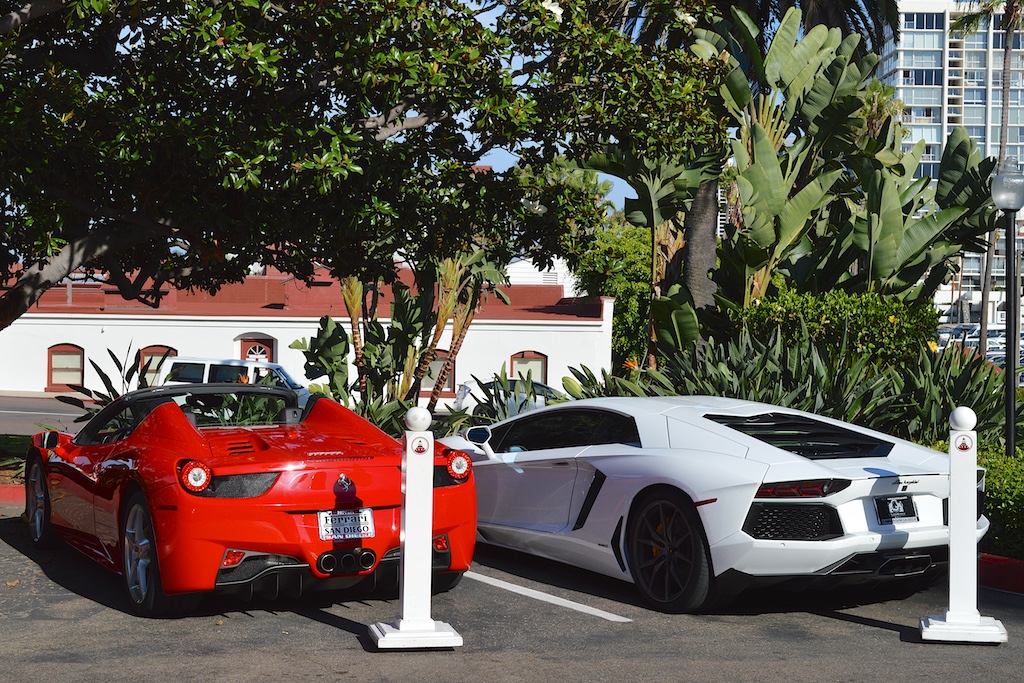 Another interesting bit of history about the Hotel del Coronado is that the original landscaping was done by Kate Sessions, the pioneer horticulturist also known as the “Mother of Balboa Park.” Much of what you see today is still in keeping with her original concept. In fact, some plants still exist today that were planted around the time the hotel opened back in 1888. Just like this Dragon Tree (Dracaena draco), easily the most famous plant on hotel grounds. 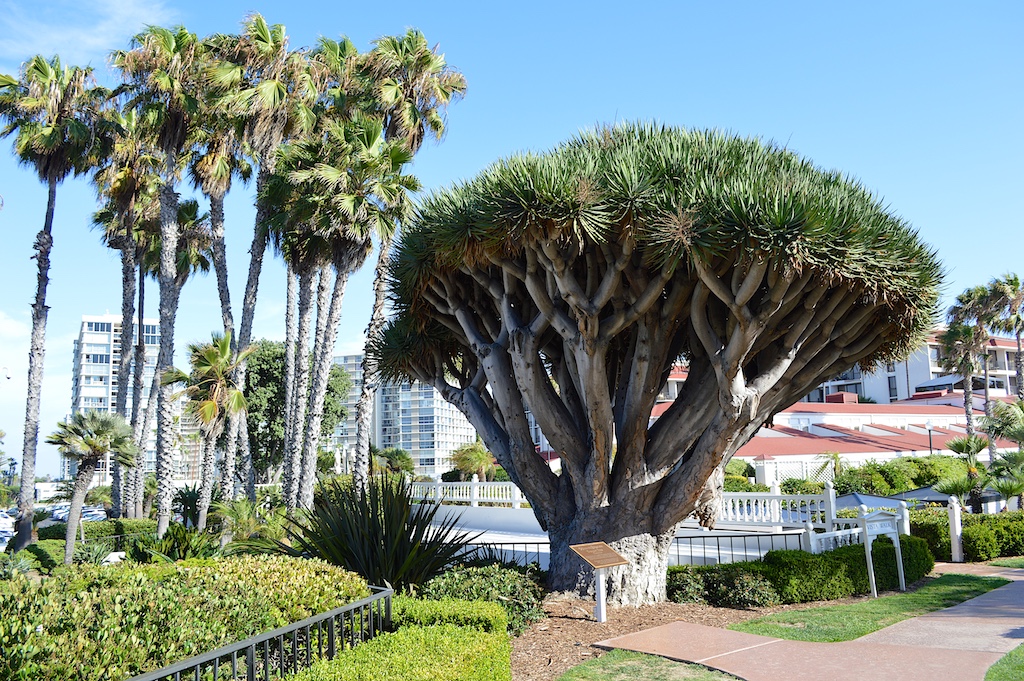 It is hard to grasp the size of this Canary Island beauty, but with the help of my 7-year-old daughter once again for scale, you get a better idea. 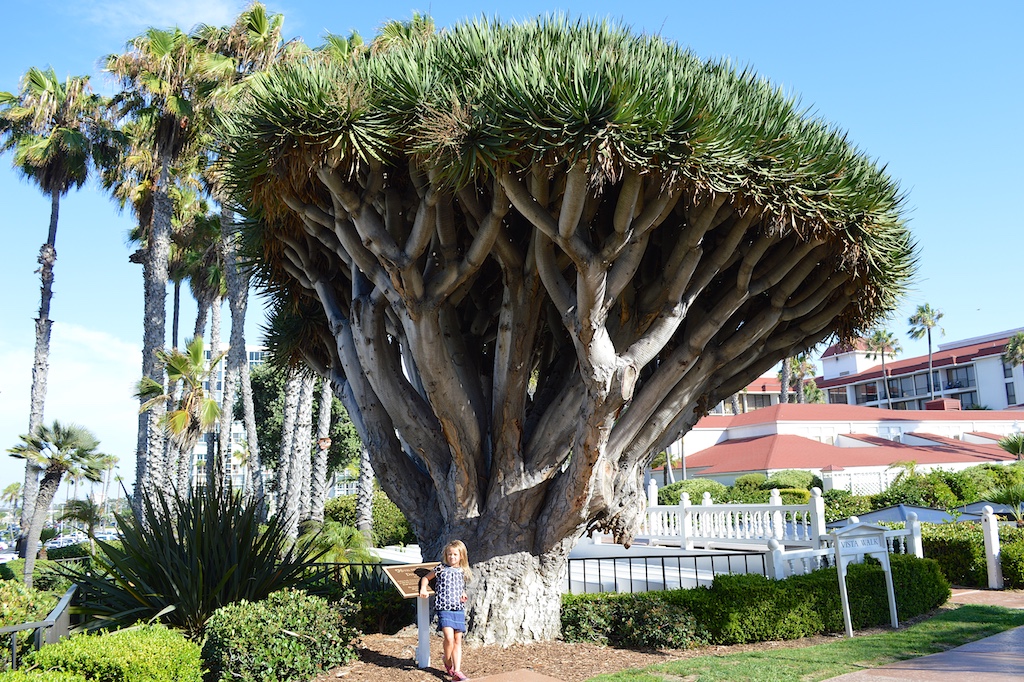 Back in 1958 the movie “Some Like It Hot” was filmed on the hotel grounds. In order to get clear shots of Marilyn Monroe, photographers actually cut some limbs of the Dragon Tree. 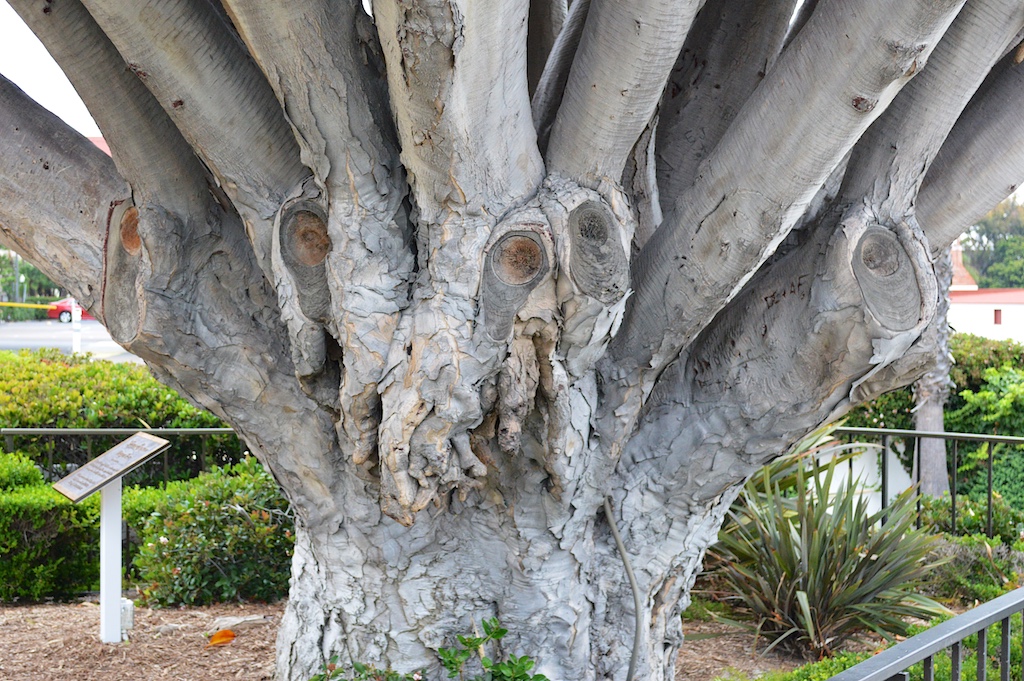 Worse still, some scumbags have even carved their initials into the tree more recently. What is wrong with some people? 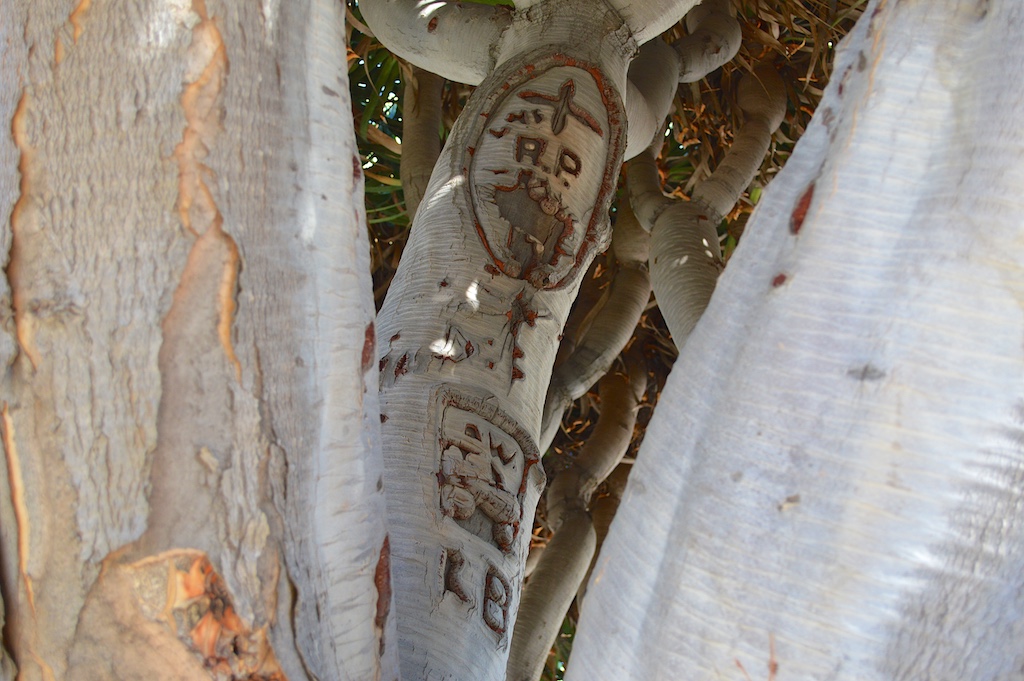 Another plant that goes back to the hotel’s beginnings and is marked in history is the Norfolk Island Pine (Araucaria heterophylla). In 1904, holiday lights were strung from the hotel to a nearby Norfolk Island Pine. This proved to be the world’s first electrically lit, outdoor living Christmas tree. 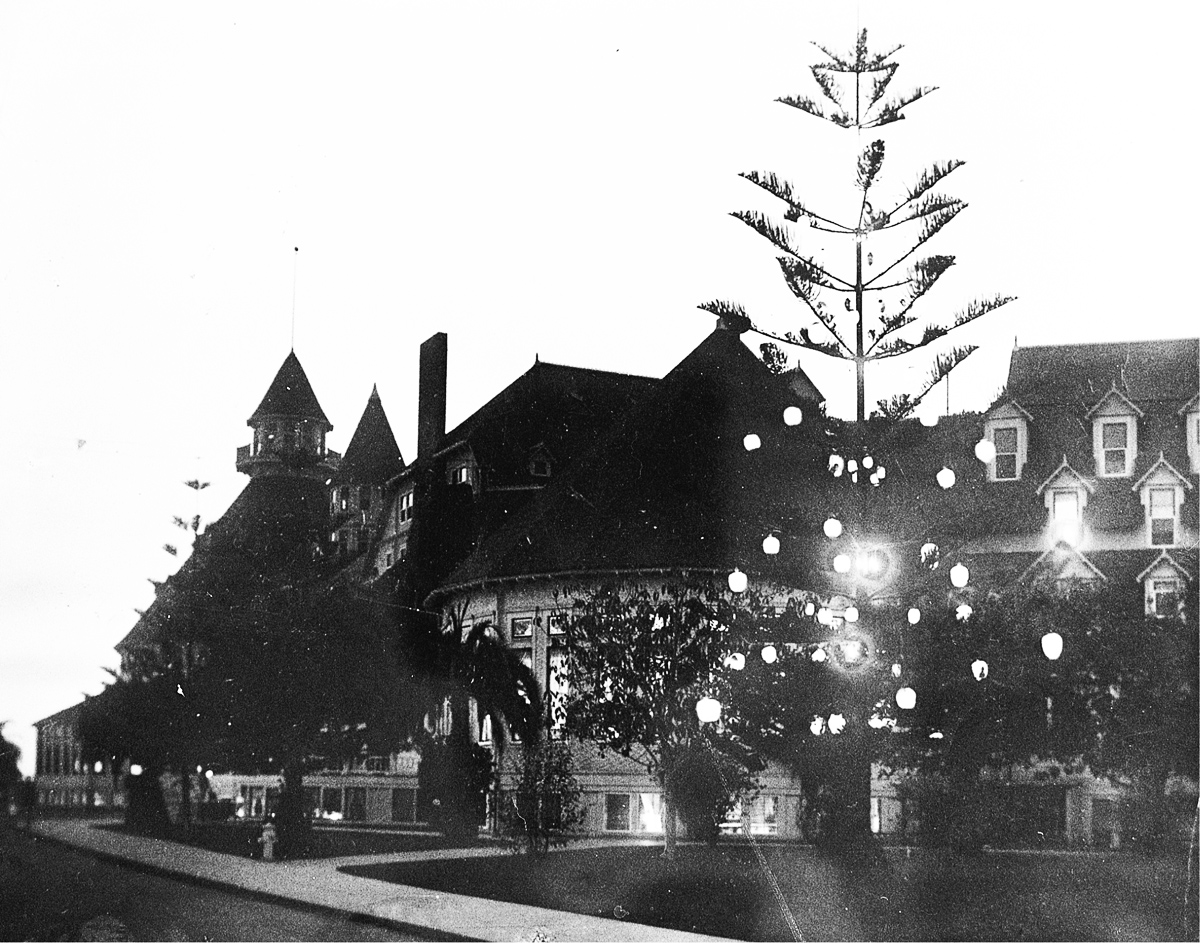 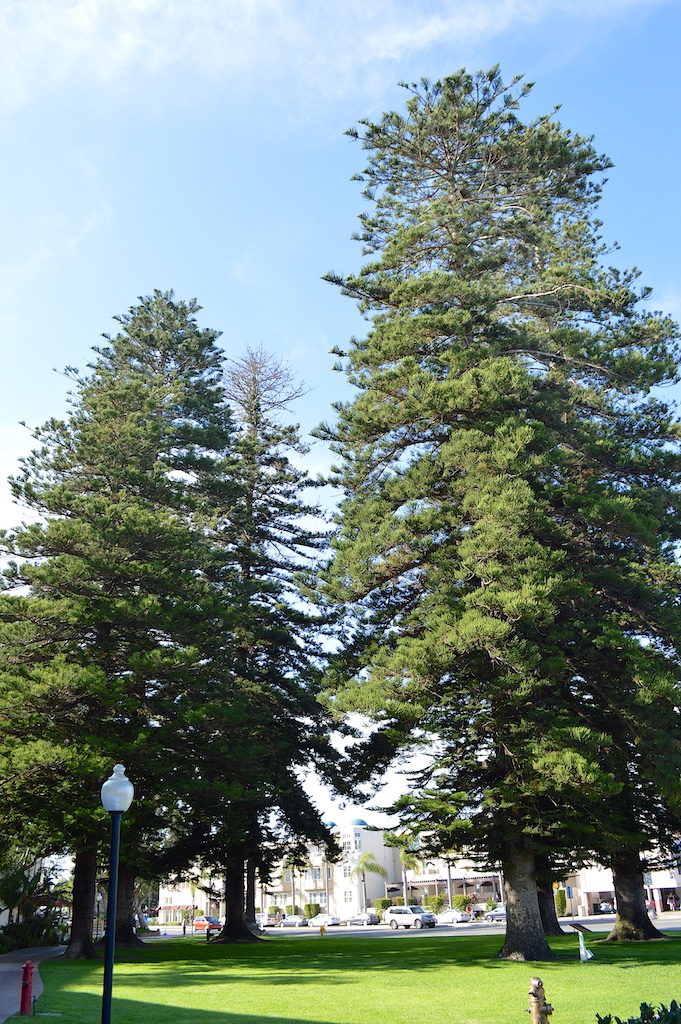 Not all the plantings have dated beginnings. The vegetable garden is rather new. 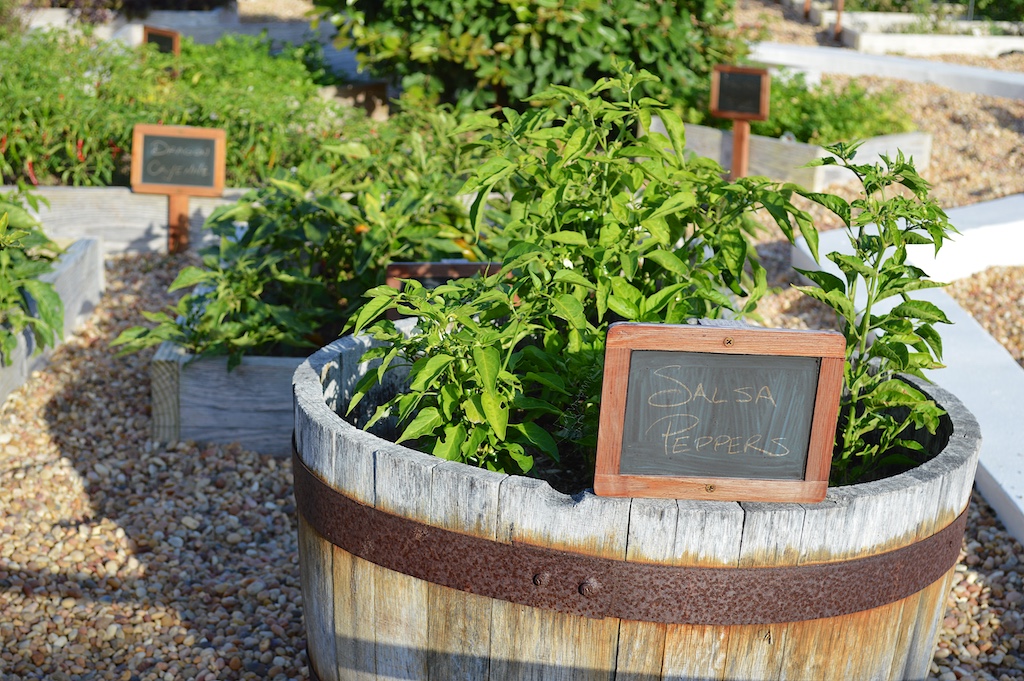 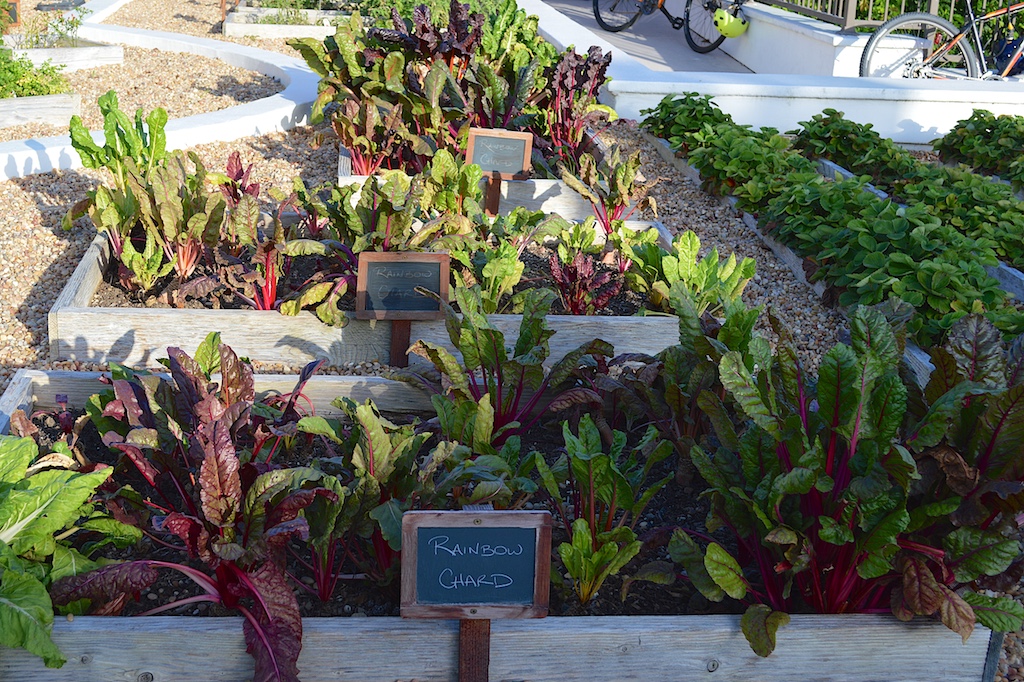 Most of the outer landscape of the Hotel del Coronado is planted with popular Southern California staples. 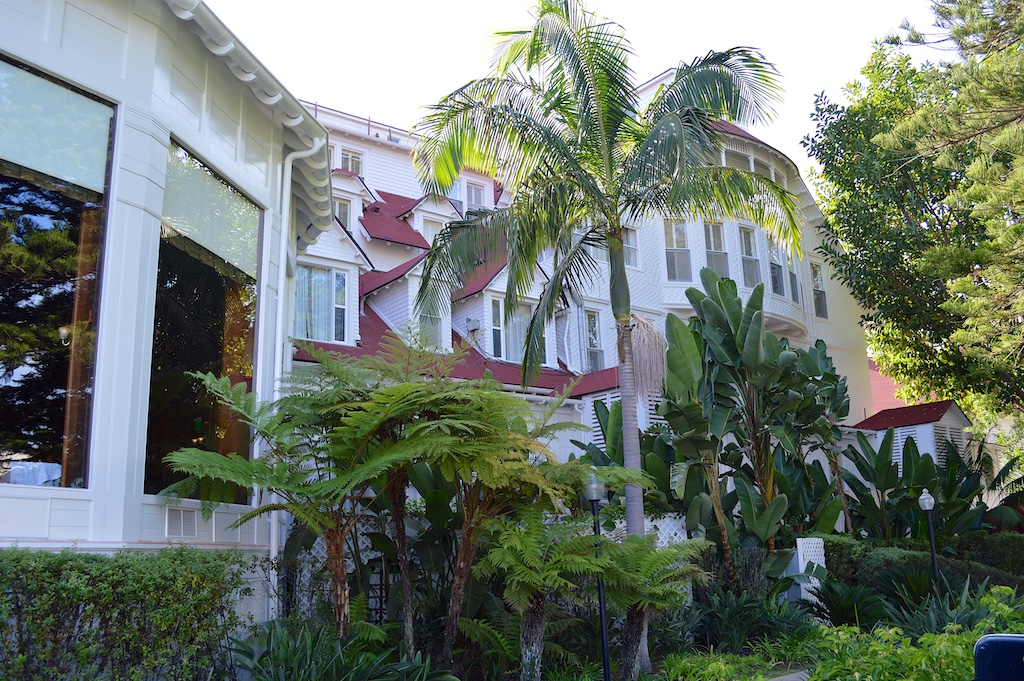 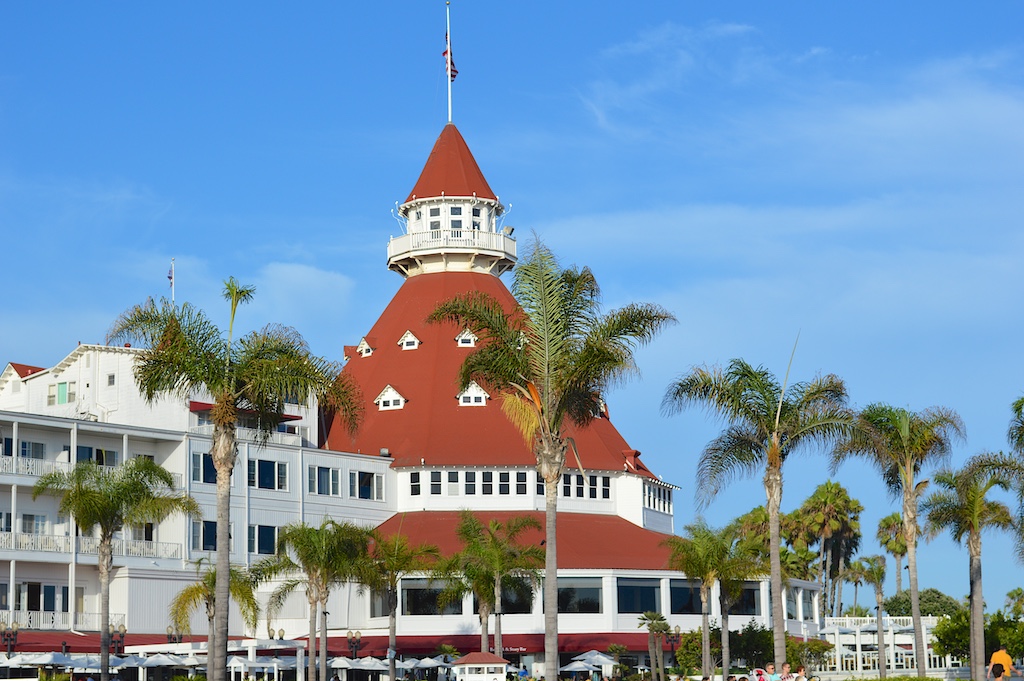 Aloes and agaves are used to help prevent erosion on the berm dividing the hotel from the beach. 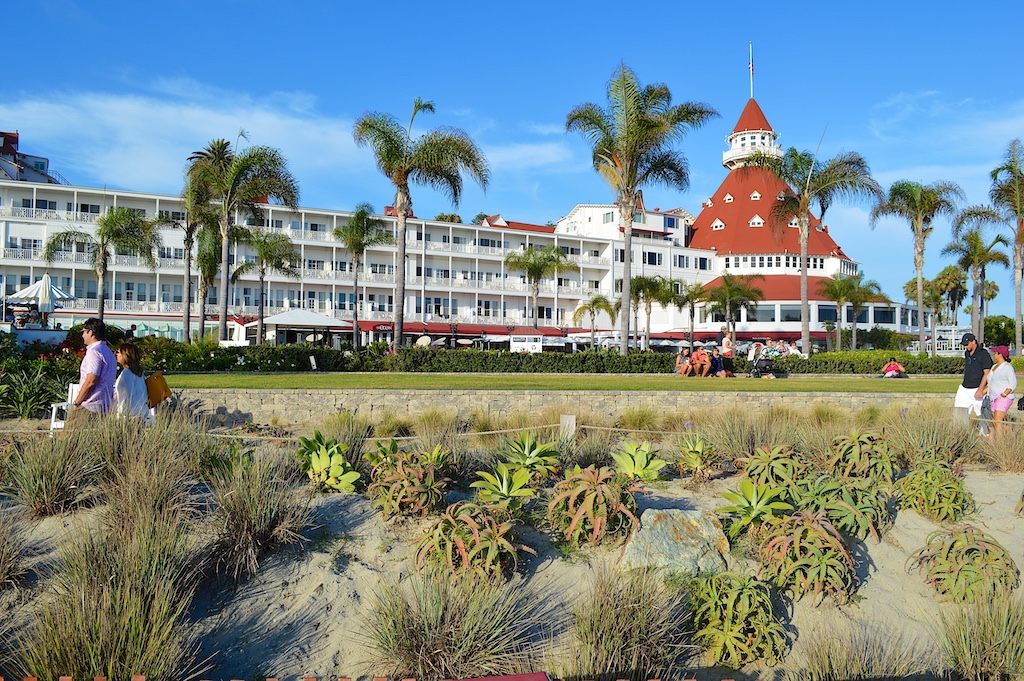 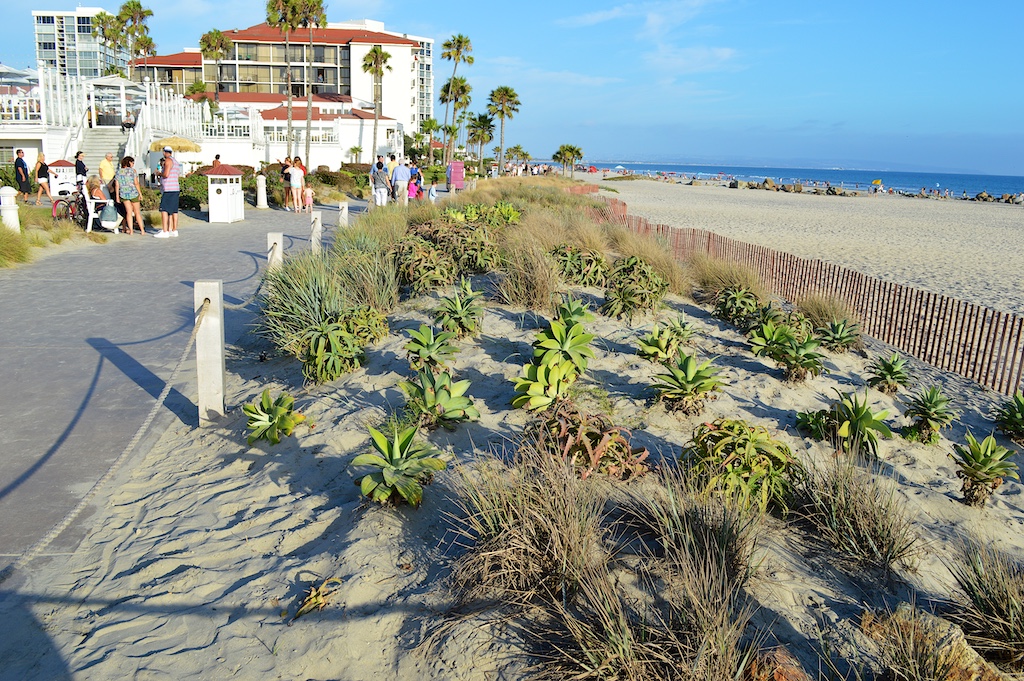 The main side entrance has a few Date Palms (Phoenix dactylifera) and an old Canary Island Date Palm (Phoenix canariensis). 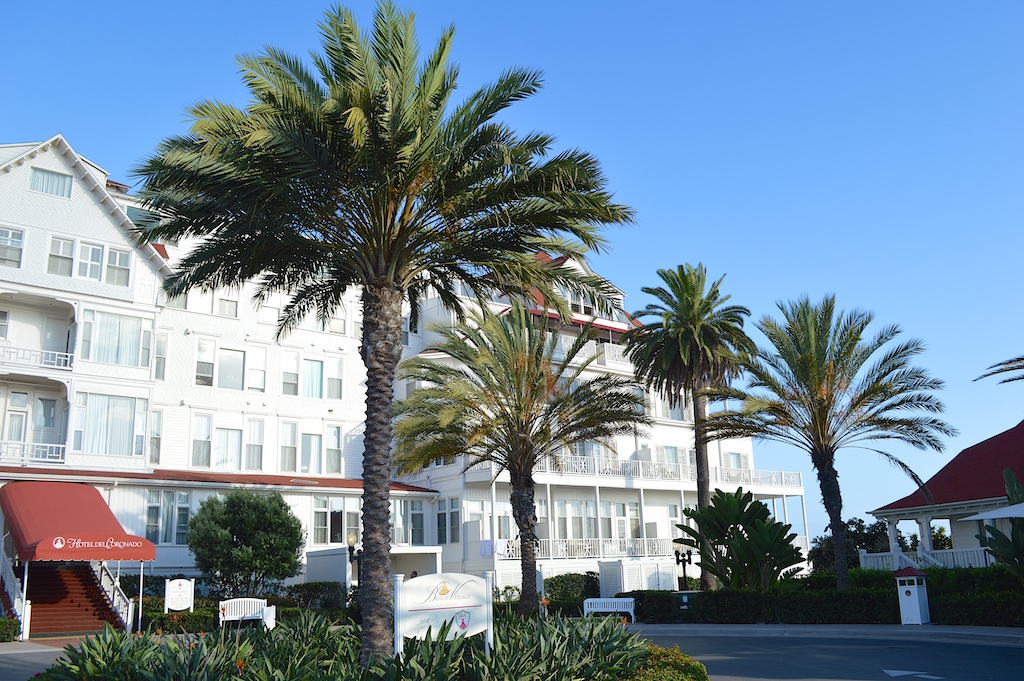 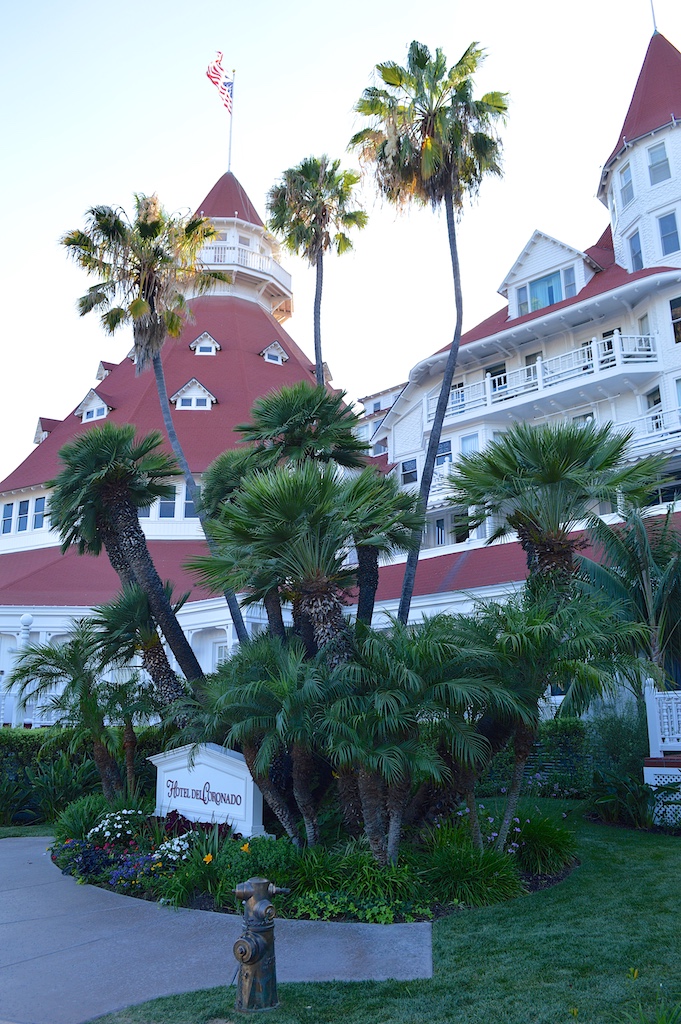 A few Sago Palms (Cycas revoluta) at the base of some Mexican Fan Palms. 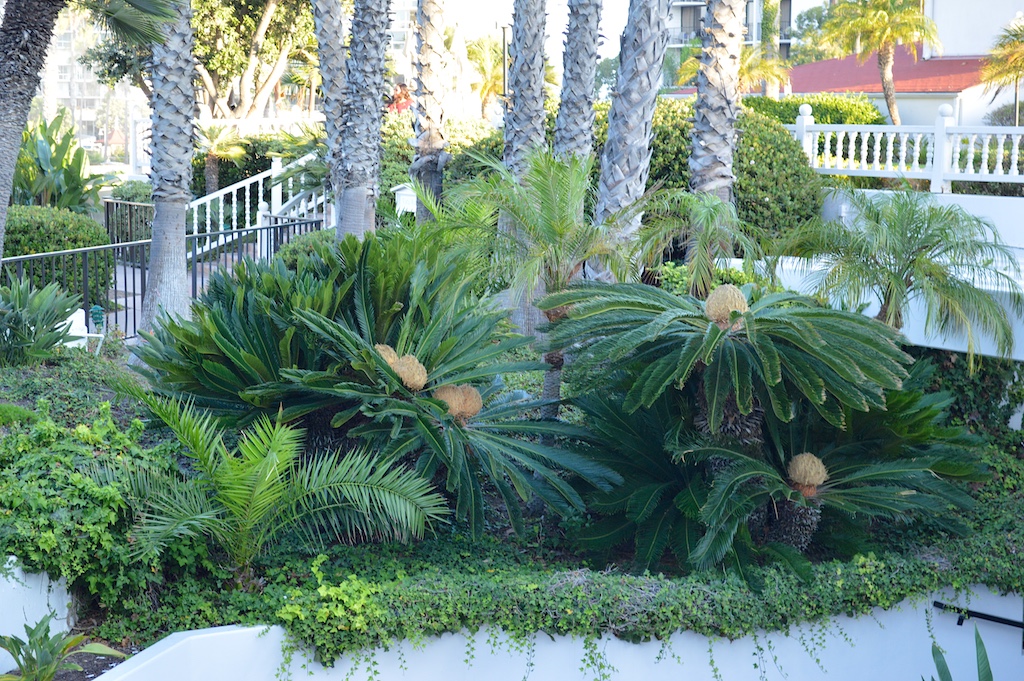 One plant you rarely find growing in a Southern California landscape is the Travelers Palm (Ravenala madagascariensis). And unless you walk the Southern portion of the Hotel del Coronado’s property, you would miss these perfectly grown plants.

The Travelers Palm (not a real palm tree) gets its name from the fact it is usually found growing on an east-west line, with the flat surface facing north and south. This can be used as a rudimentary compass. Here is a side view of a Ravenala madagascariensis. 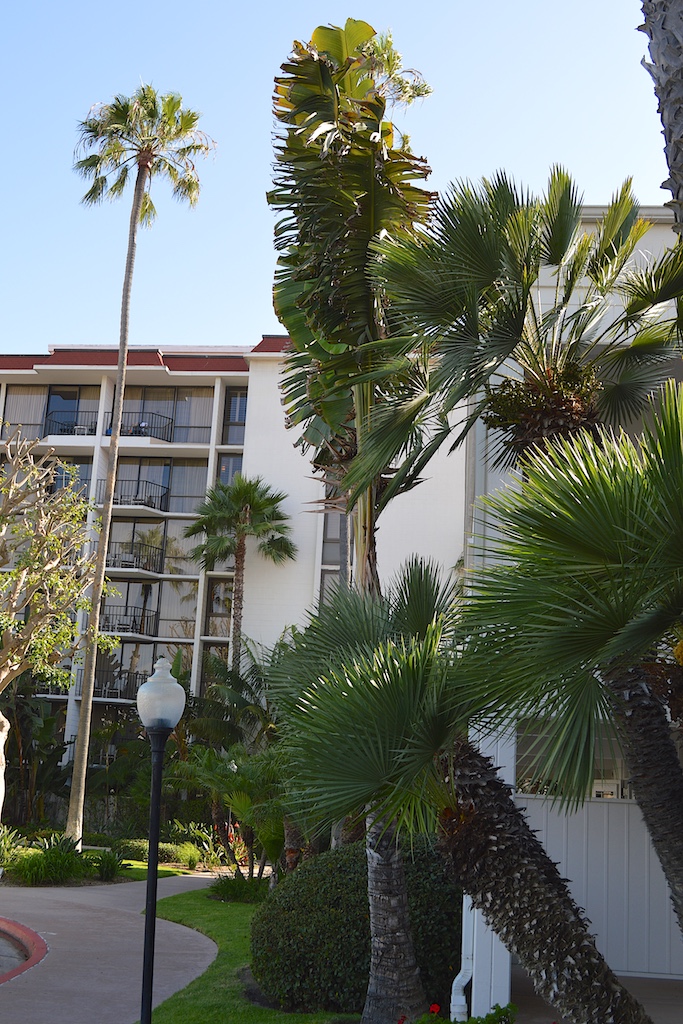 Similar to the Giant Bird of Paradise, Ravenala madagascariensis proves more cold sensitive, so nicely grown plants like the one my daughter is photobombing below are difficult to find in SoCal. 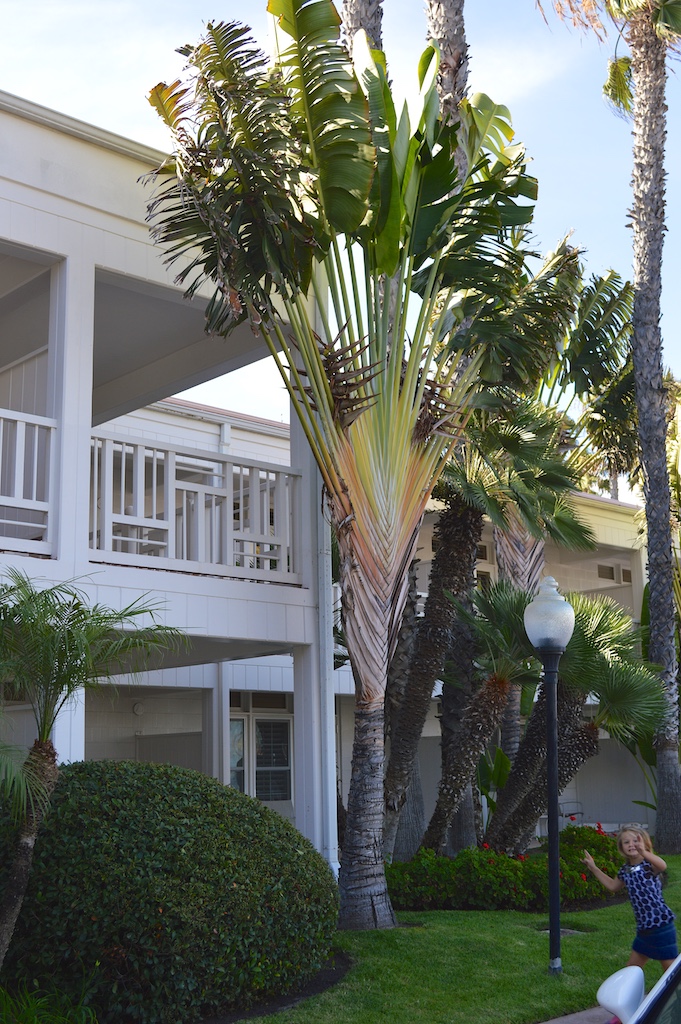 One of the three original founders of the Hotel del Coronado was E. S. Babcock. Babcock was widely considered the main player in the overall grand vision for the hotel. Landscaping always played a key role as this Babcock quote proved:

It would be built around a court…a garden of tropical trees, shrubs and flowers.

To this day the Hotel del Coronado’s courtyard is planted out as Babcock envisioned. This includes a few original Canary Island Date Palm (Phoenix canariensis) plantings. 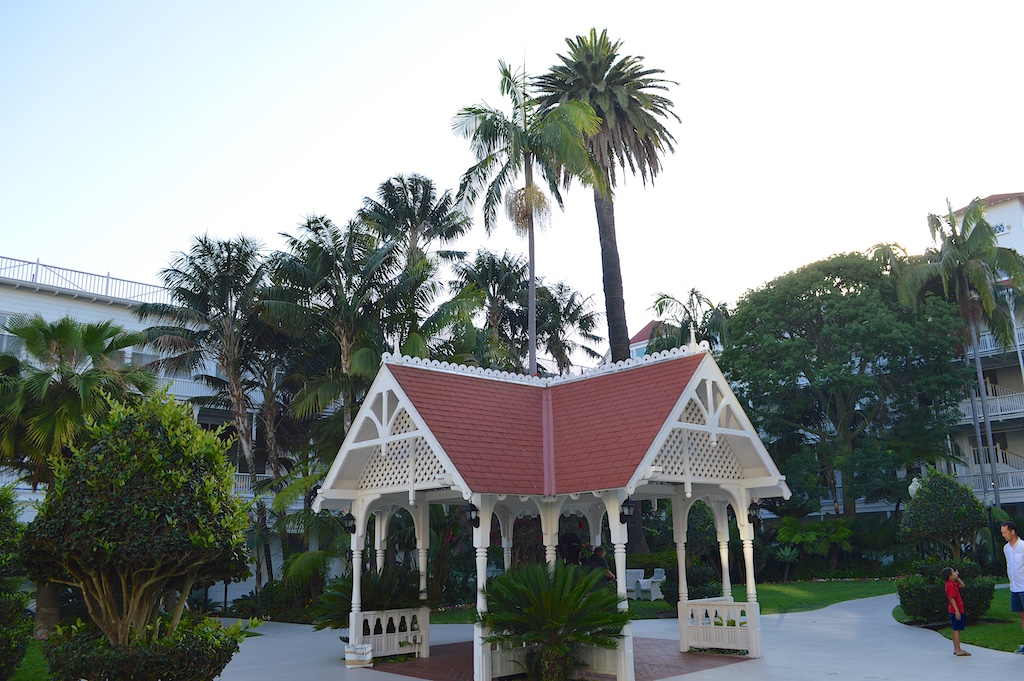 The courtyard does have a tropical feel to it thanks in part to the wide assortment of palms trees planted. 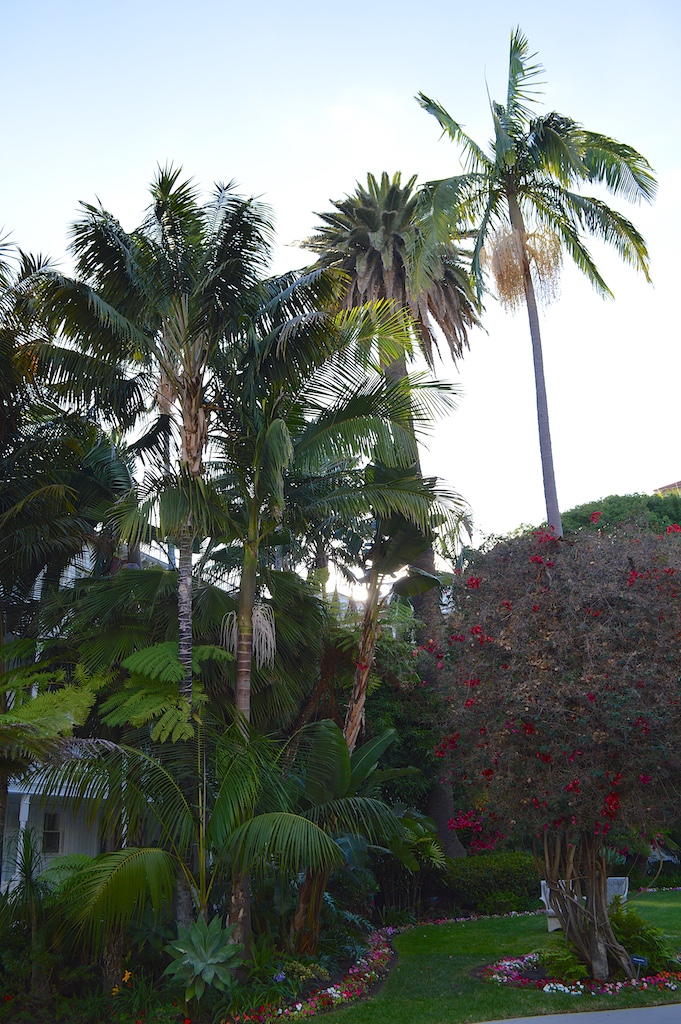 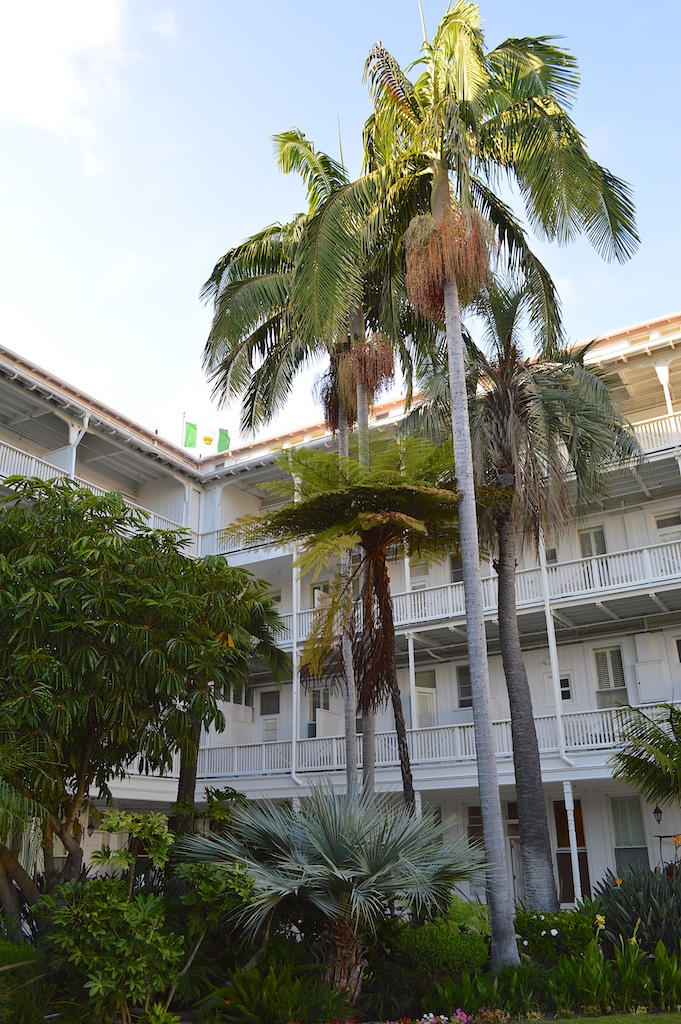 An unknown Pritchardia species on the left and a Lady Palm (Rhapis excelsa) on the right.

A KentiaPalm (Howea forsteriana) on the left and a nice old Brahea edulis on the right. Howea forsteriana and Acanthophoenix cunninghamia are the two most abundant palms found in the courtyard. 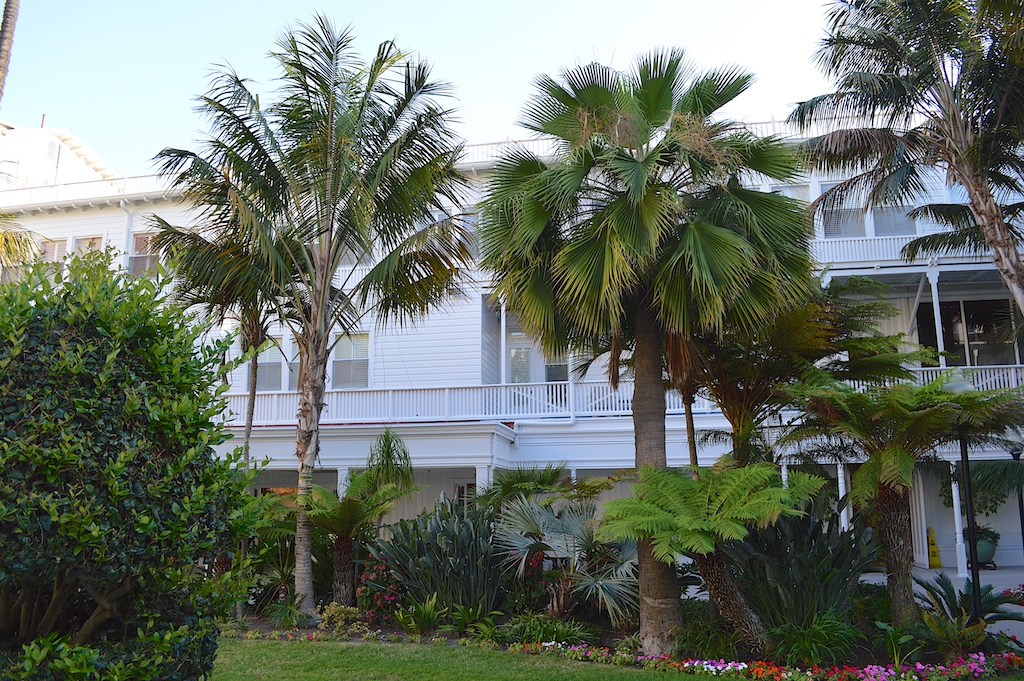 Cycads have made their way to the courtyard plantings as well. Cycas thouarsii planted next to some ferns. 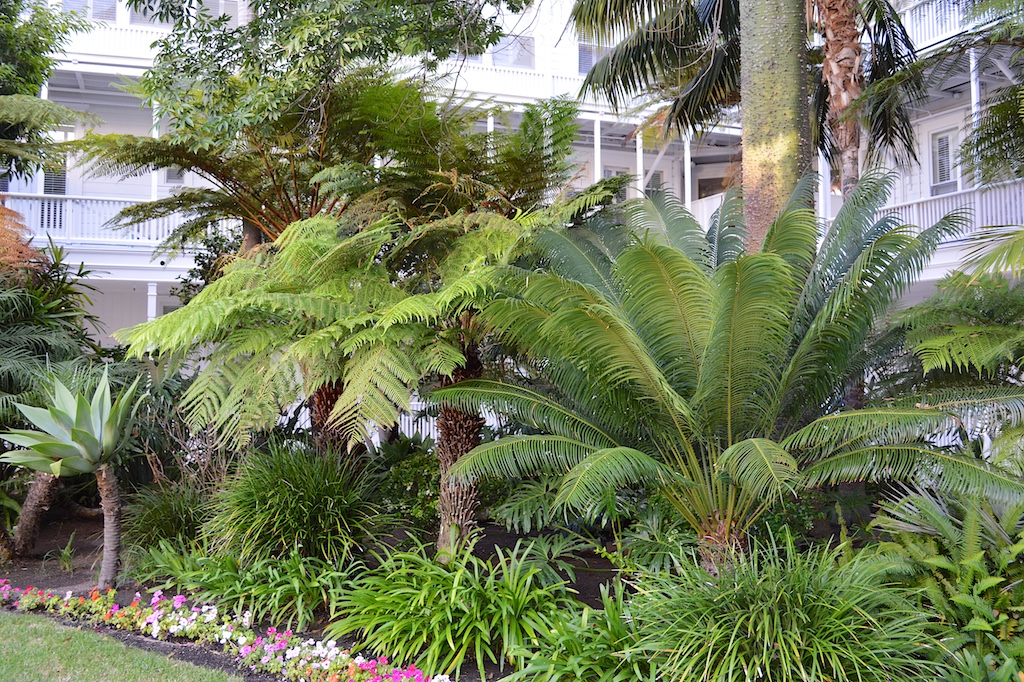 Macrozamia johnsonii planted next to a young Kentia Palm.

While my wallet might disagree, I do love staying at the Hotel del Coronado. Its Victorian architecture makes it distinct, and the fact the entire building is made of wood makes it unique. A few of the plants are some of the oldest found in San Diego, which for a plant-lover is always appealing. The weather couldn’t have been better last weekend and the above average ocean water temperatures were welcomed. Even after a long weekend and three soccer games, my daughter still had enough energy for a sunset swim with my son. What a great way to end the weekend. 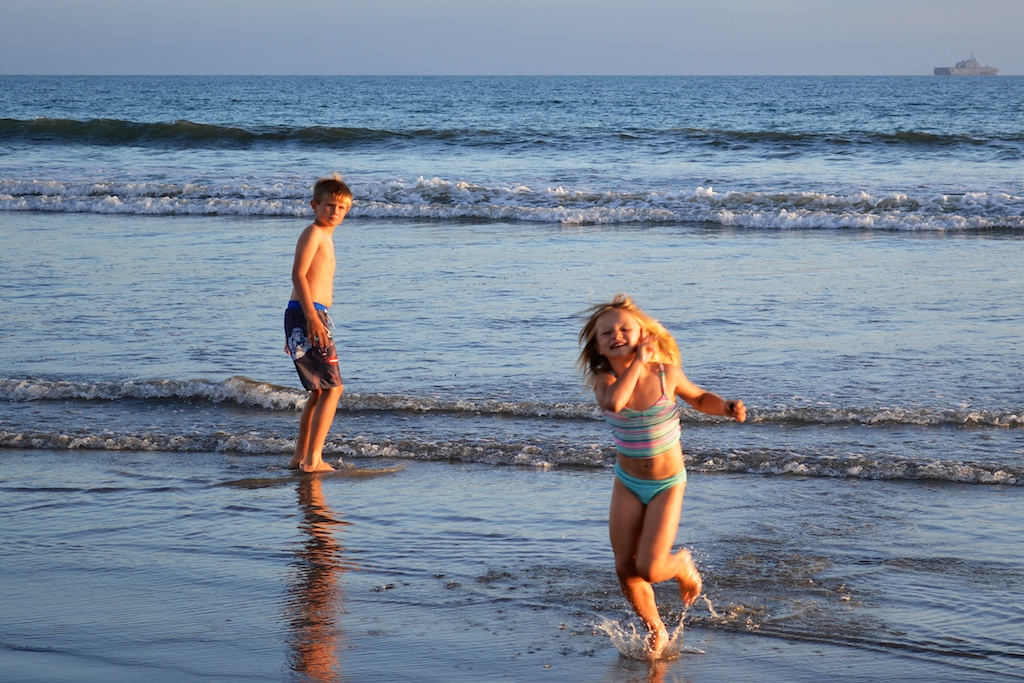 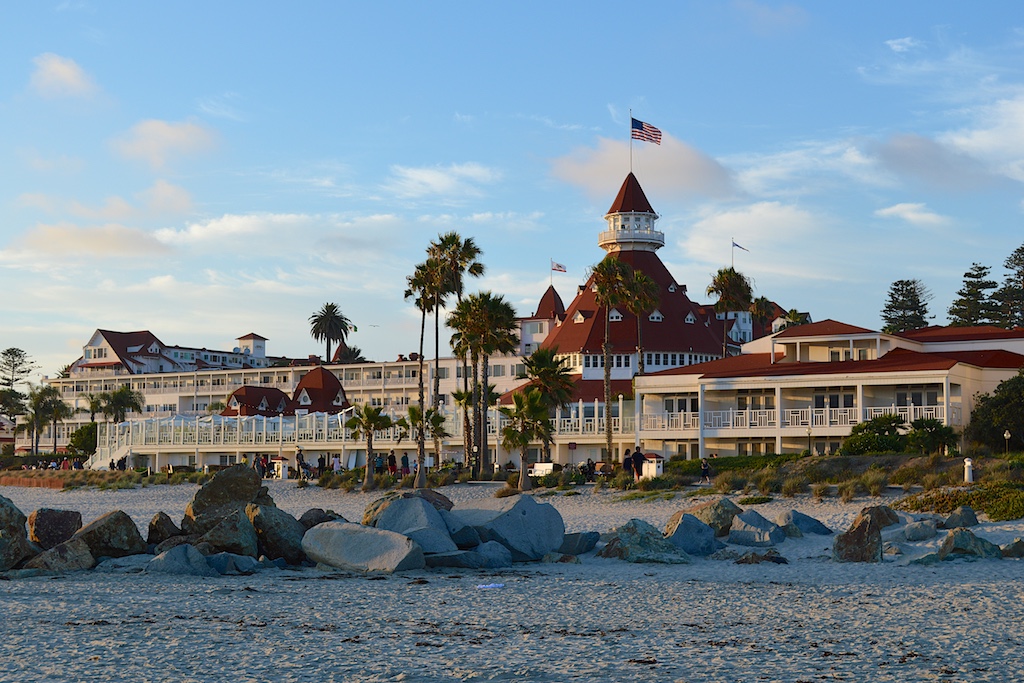