This last Saturday I had the pleasure of visiting a garden that I have had on my “to see” list for some time now. Thanks to the efforts of the Palm Society of Southern California (PSSC), the garden of Jason and Virginia Dunn in Fallbrook was open to all members of the PSSC this past weekend. Jason’s yard has been on my list of gardens to see for many reasons, but the main reason was the fact that he and I have similar taste in palm trees. It’s all about the New Caledonian and Malagasy palms. You won’t find any duds in this garden I am about to show for this spring’s PSSC meeting.

Because of some prior early morning commitments, I was late to arrive at the tour, which was set to begin at 10:30 AM. In my scramble to get my son and I out the door, I didn’t realize I had only brought my 14-24 mm lens. I love this lens for the up close and personal stuff you that you cannot step back and get photos of, but it does have its limitations and faults. Also, while shooting I spent most my time talking to old palm friends and before I knew it my son was telling me it was time to go. I feel bad I won’t be doing this garden the justice it deserves. I hope to get back there again this spring and post an update showing more of the individual palms in his amazing collection.

When you are late for a PSSC meeting, parking can be an issue. The only space open less than a few blocks away from Jason’s yard was this one. I passed on this parking space and opted to walk. 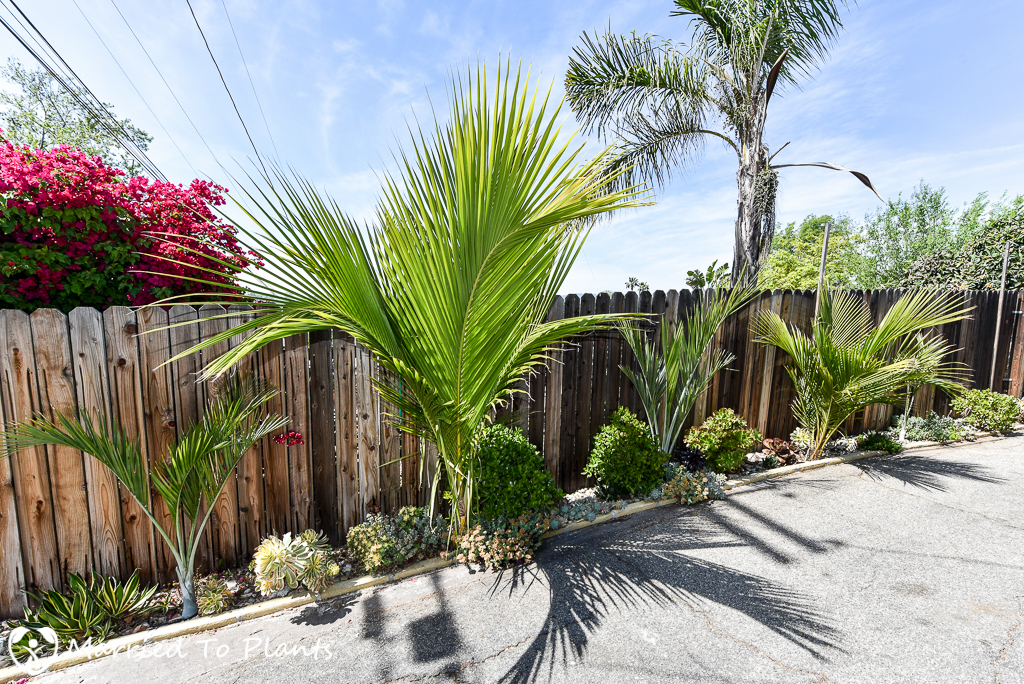 Even though I arrived an hour late, there were still a lot of PSSC members touring Jason’s garden. 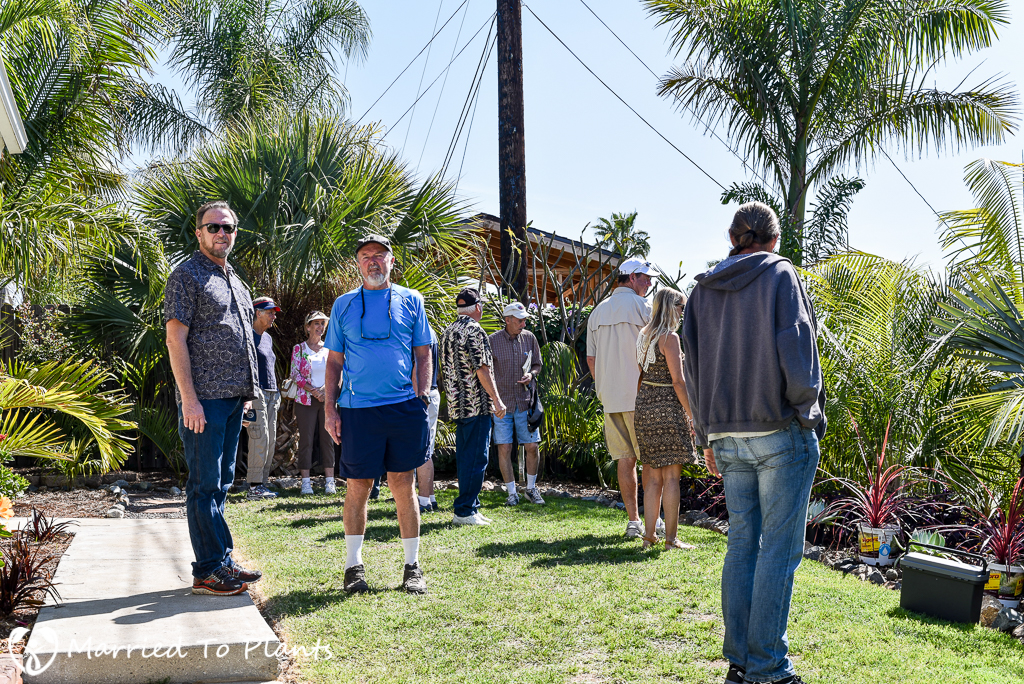 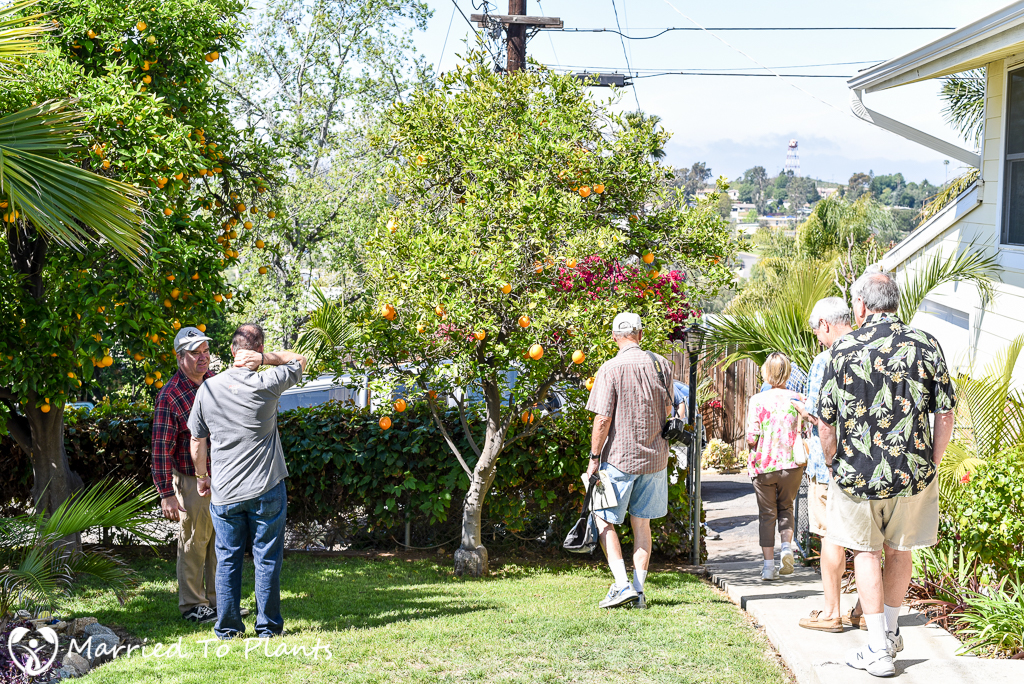 The front yard had a few palms removed a while back which opened up the planter and made this the sunny part of the garden. I like that Jason added lawn in the front yard to create some negative space and give people a location from which to view the palms once they are much larger. 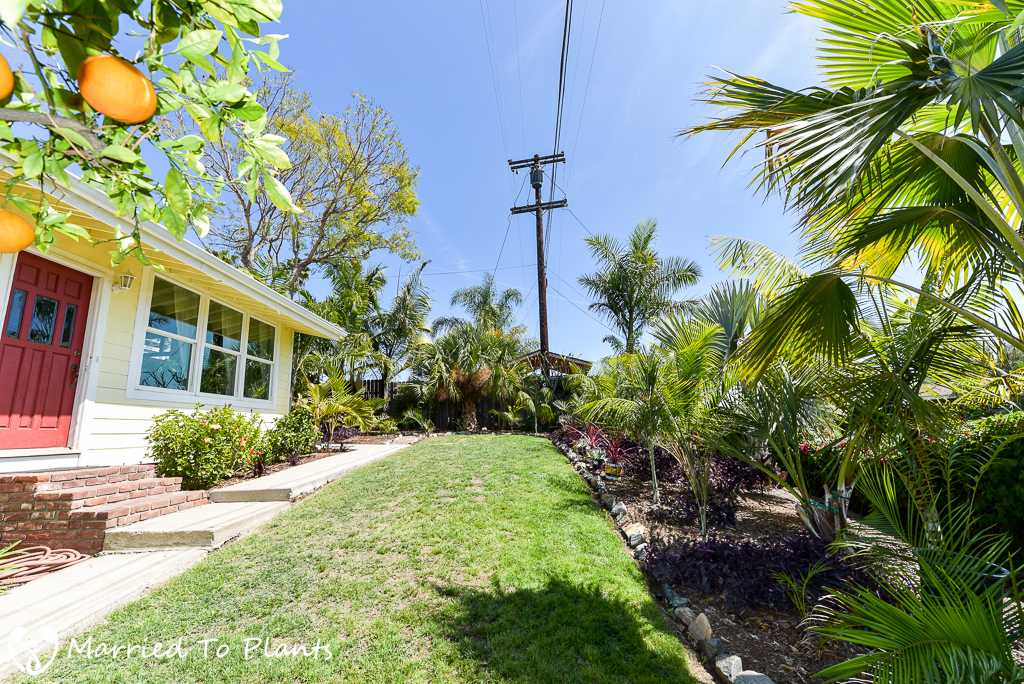 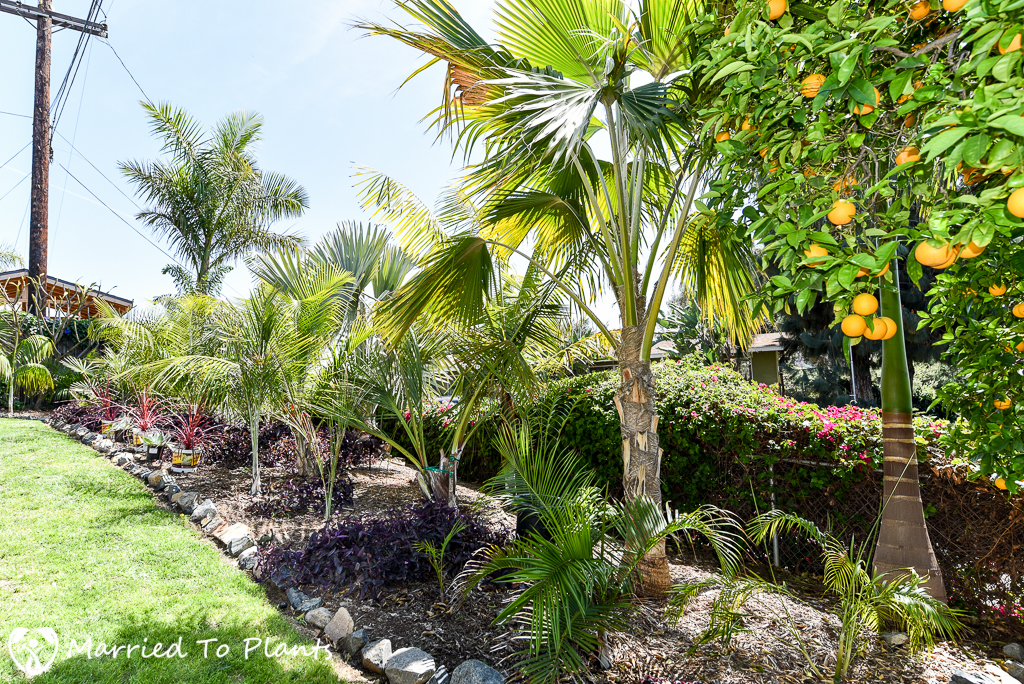 One of the centerpiece palms here is Ravenea glauca. The white trunk behind it is of a Dypsis leptocheilos. One of my favorite palms for SoCal. 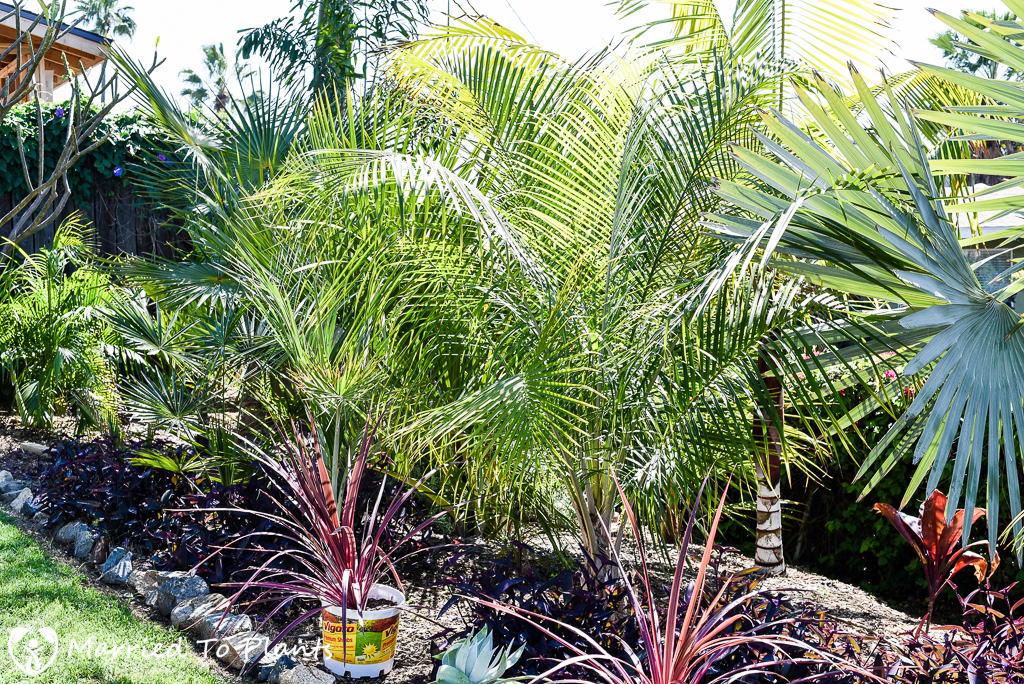 Stationed at the end of the grass was a large flowering unknown Sabal. 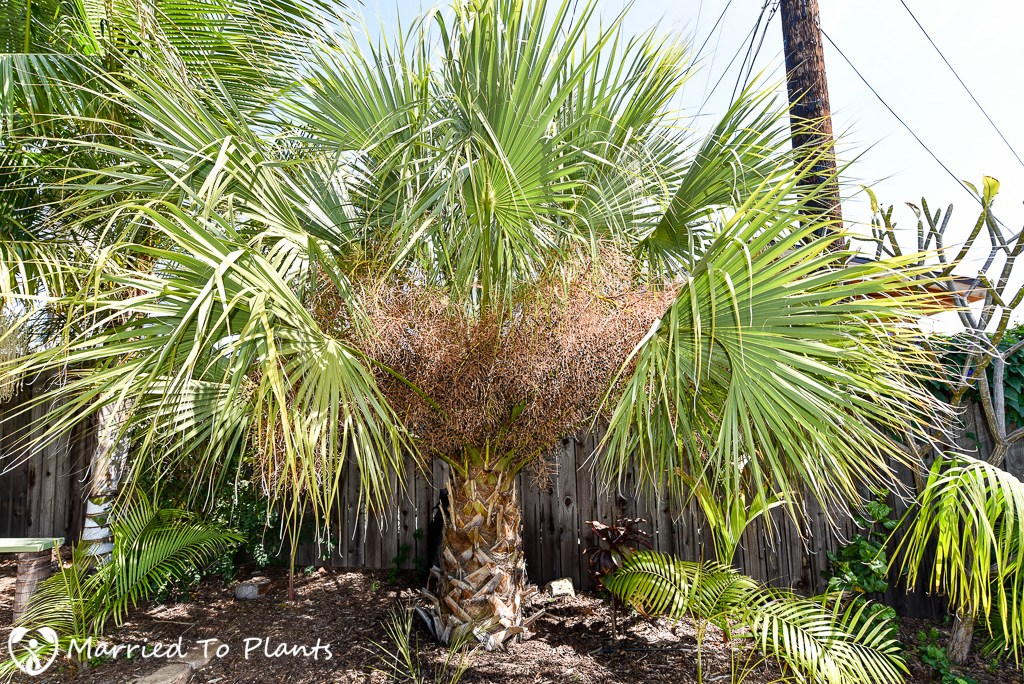 Still in the front yard, the jungle begins to emerge. This theme is carried out all the way to the backyard. The plant below is a nice-sized Kentiopsis pyriformis (New Caledonian). The white trunk to the right of it is of another Dypsis leptocheilos (Malagasy) of course. 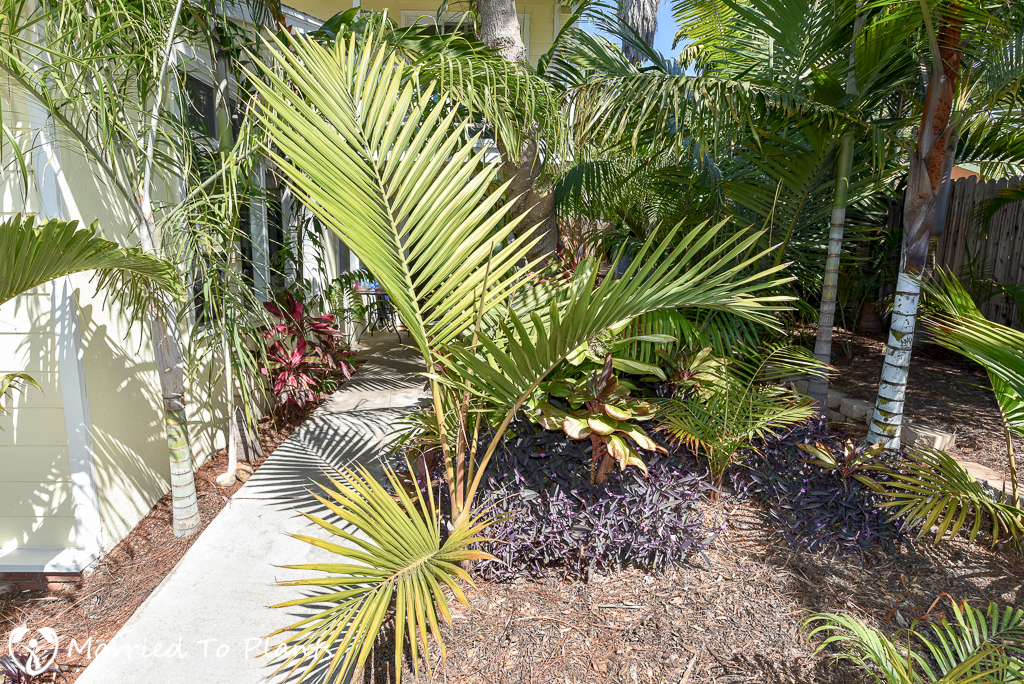 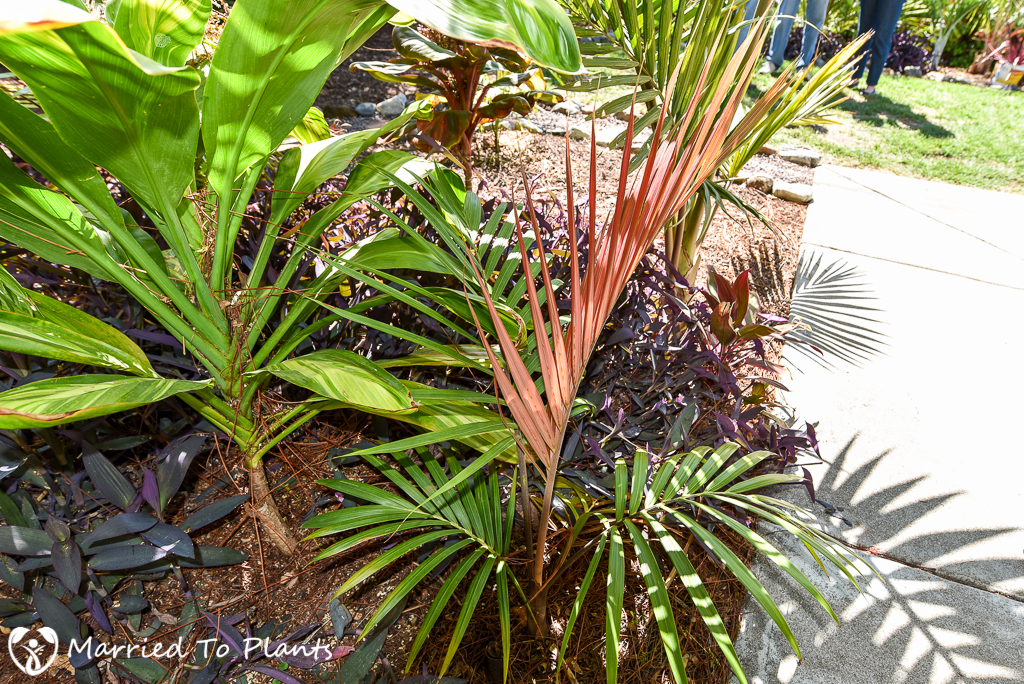 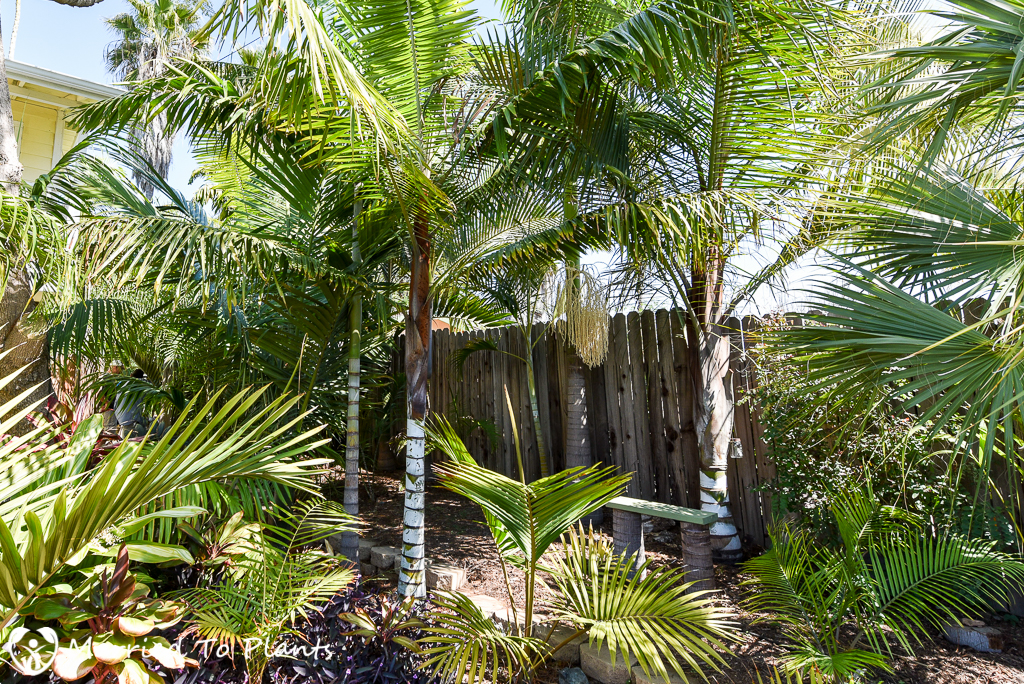 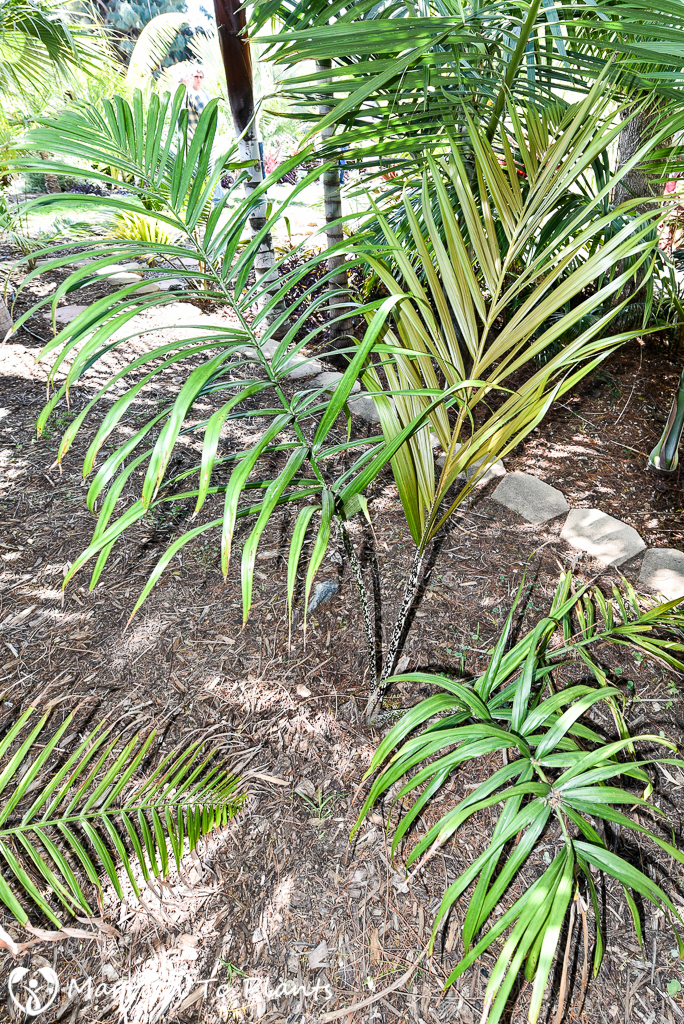 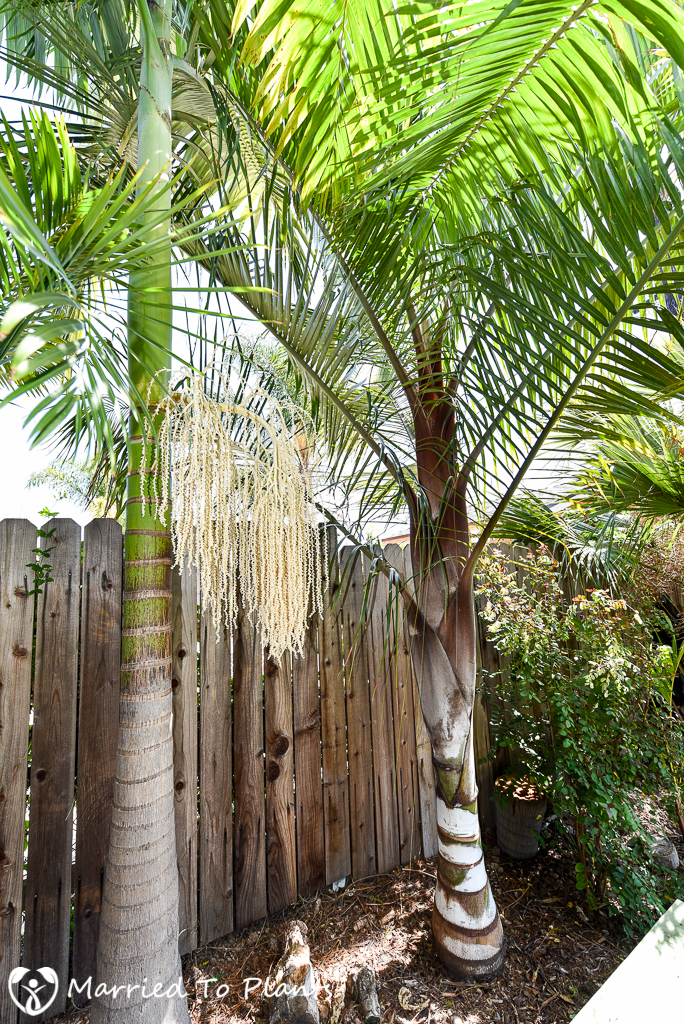 This is a really cool pairing of palms. Chambeyronia macrocarpa ‘Watermelon’ and Archontohphoenix purpurea. 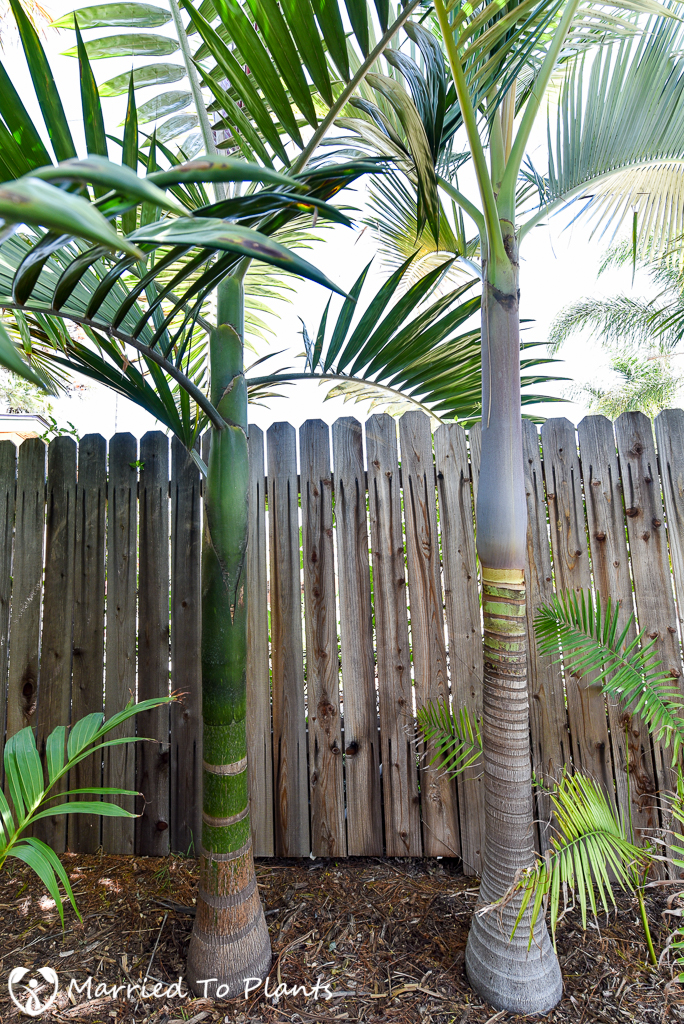 You will not see a better grown Ptychosperma waitianum anywhere in California. These are not the easiest palms to grow, as their native habitat is in Thailand. It was good timing, as a new red leaf was opening. The palm behind it is another plant you do not see often in California – Veitchia spiralis. If the labeling was correct, it is impressive to find Veitchia spiralis growing here considering it comes from the tropical island of Vanuatu. 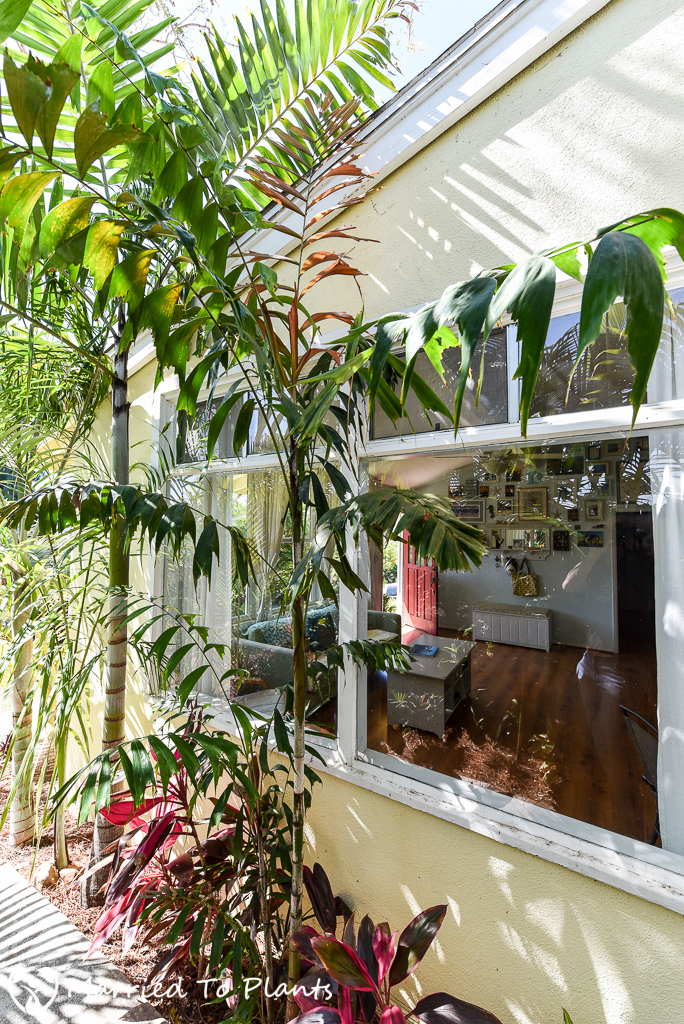 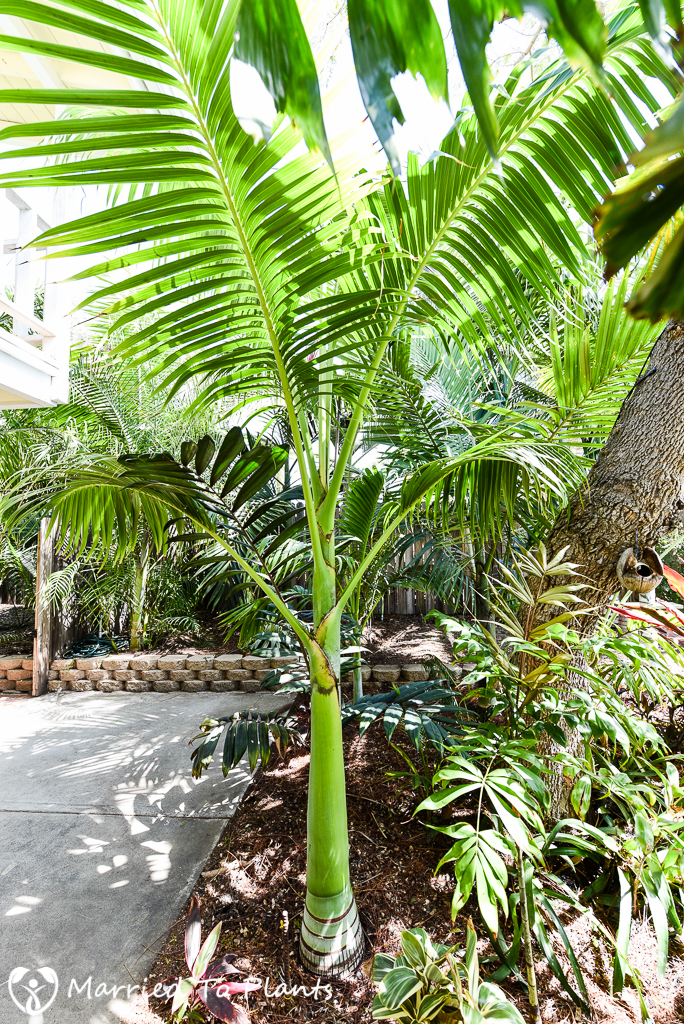 Walking into the backyard is like walking into a jungle with rock pathways. It is hard to believe this entire garden sits on just a fifth of an acre. Jason and his wife bought their unlandscaped home back in 2009, so everything you see in this post was started just 7 short years ago. All palms were planted small, with the largest coming in 15-gallon pots. Jason’s garden has over 200 palms with representation from over 100 species. 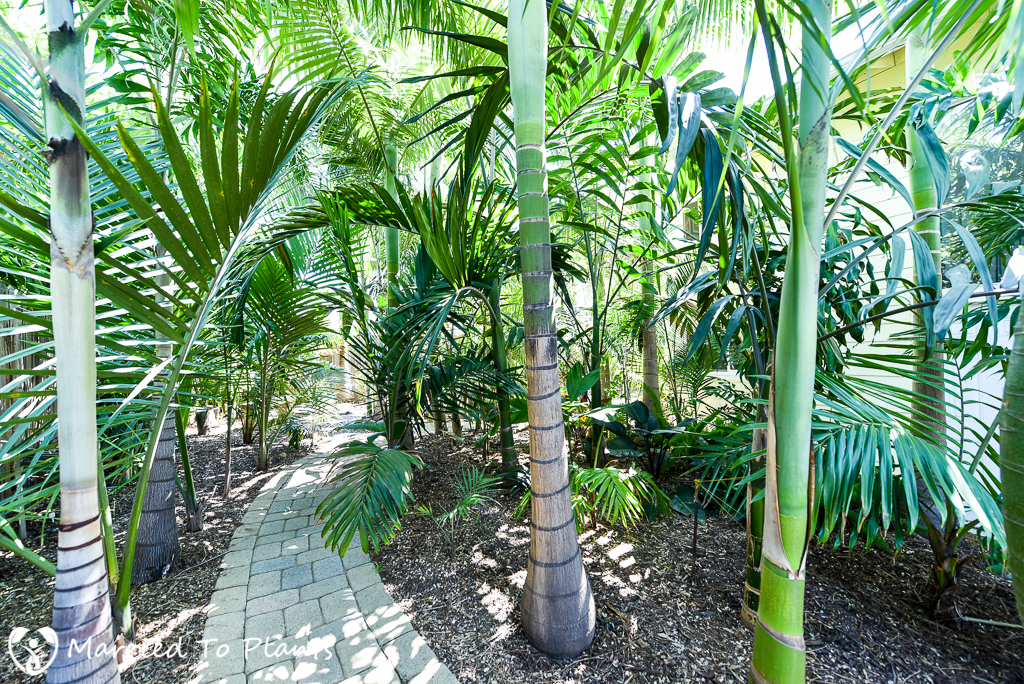 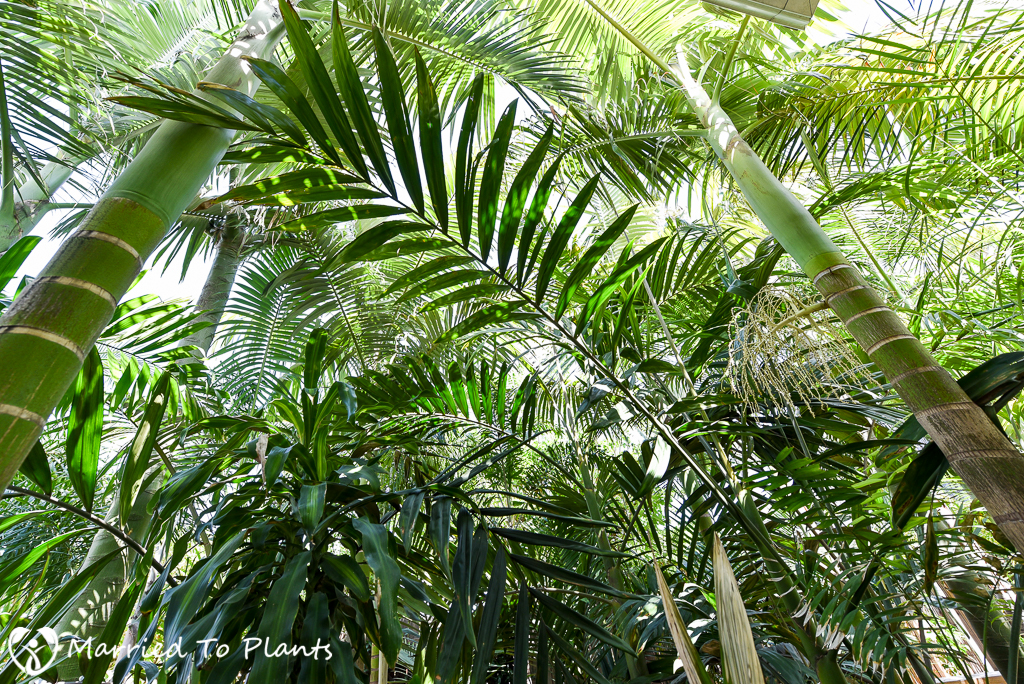 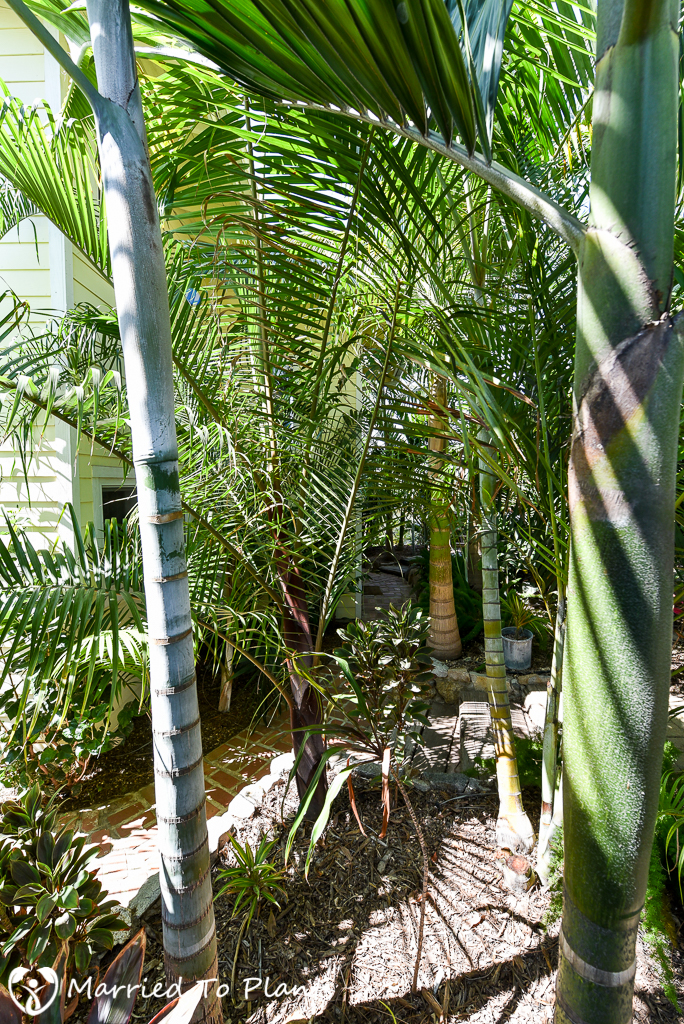 Two palm nuts that stuck around late like myself. These two PSSC members are also regulars on PalmTalk – the International Palm Society’s online discussion forums. 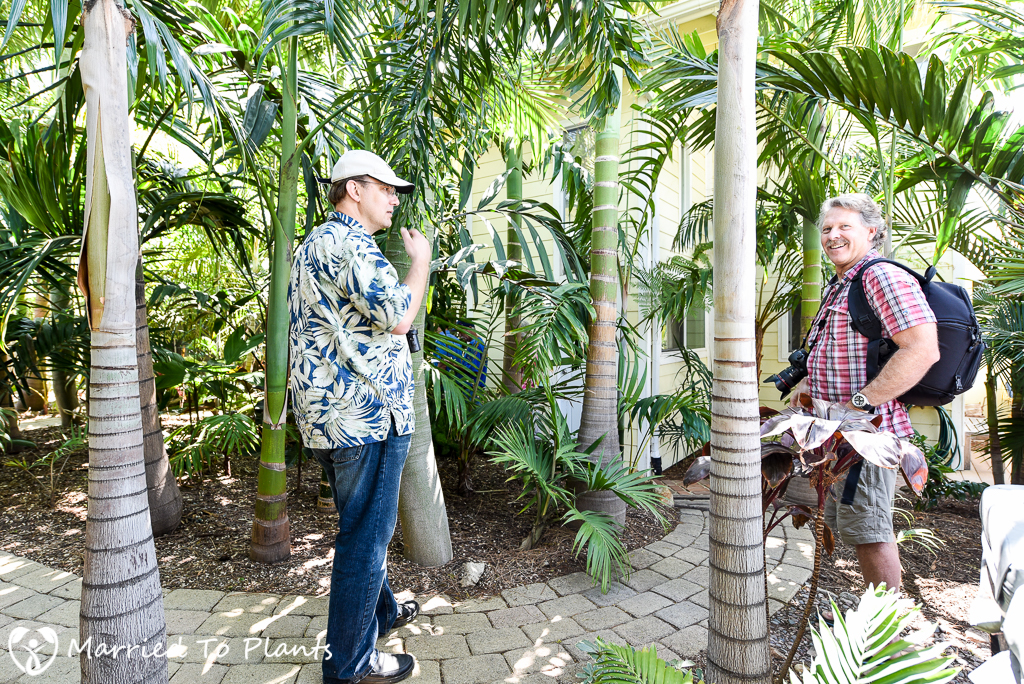 A nice place to rest in the corner of the backyard. 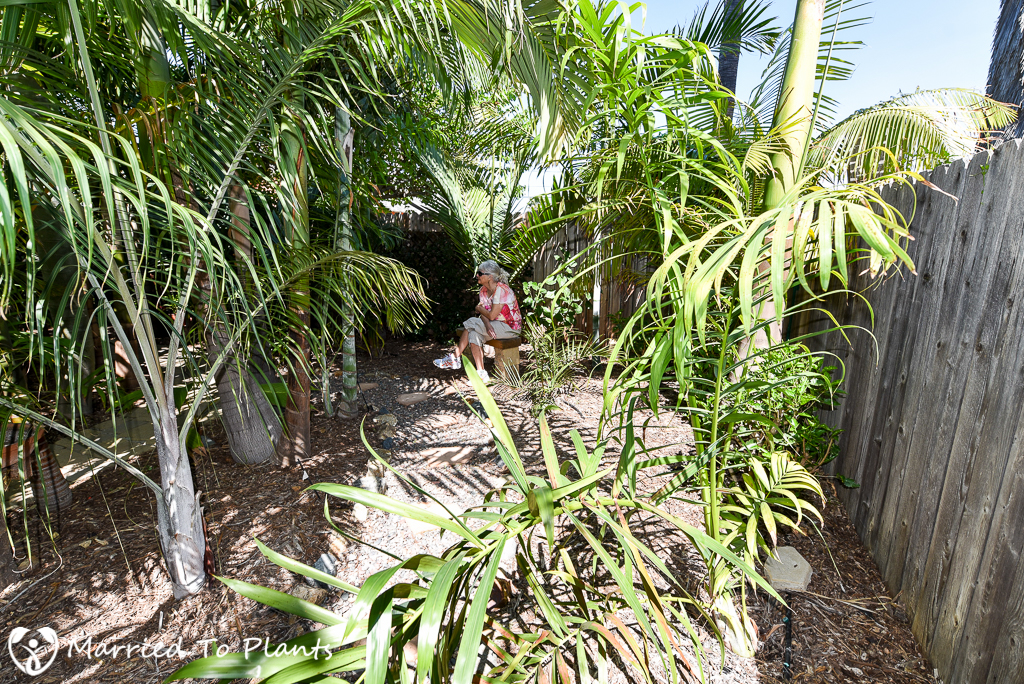 To the right just as you enter the backyard is a PSSC meeting palm first for me. This palm below is Attalea geraensis and I have never heard of it or personally seen it being grown in the ground in Southern California before. Attalea geraensis is a stemless palm, so it won’t grow into the massive palms most Attalea do. These leaves are about 15 feet tall. 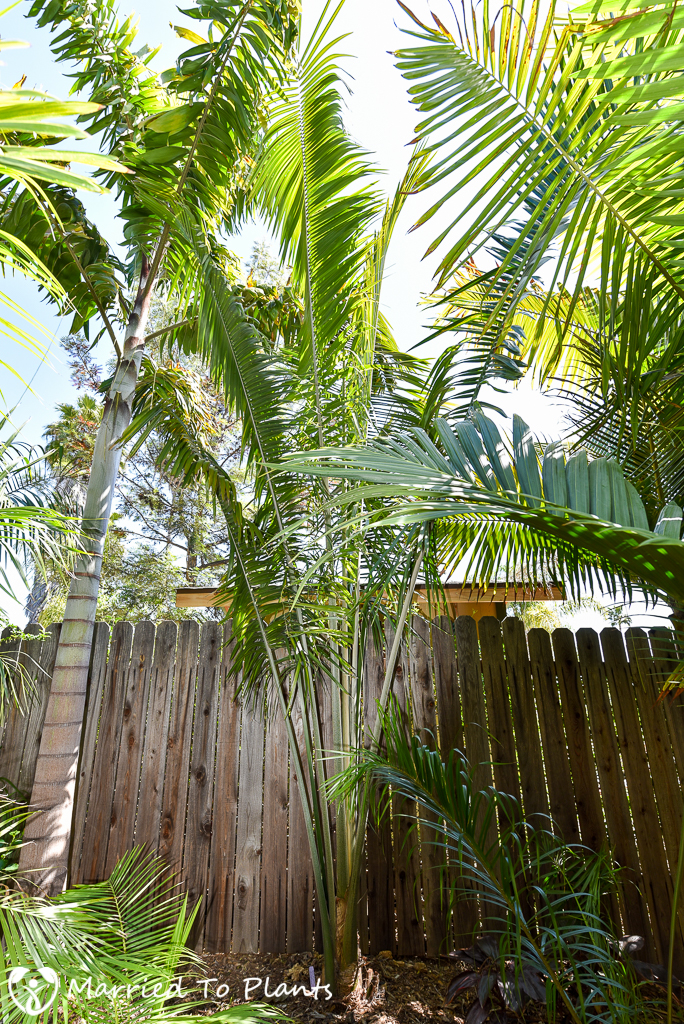 Another amazing success story, if the plant is labeled correctly, is this beautiful Ptychosperma schefferi. This palm is native to central New Guinea. I have been there and I can assure you the weather is nothing like Southern California’s mediterranean climate. This palm is grown perfectly, and remember it just went through winter too. 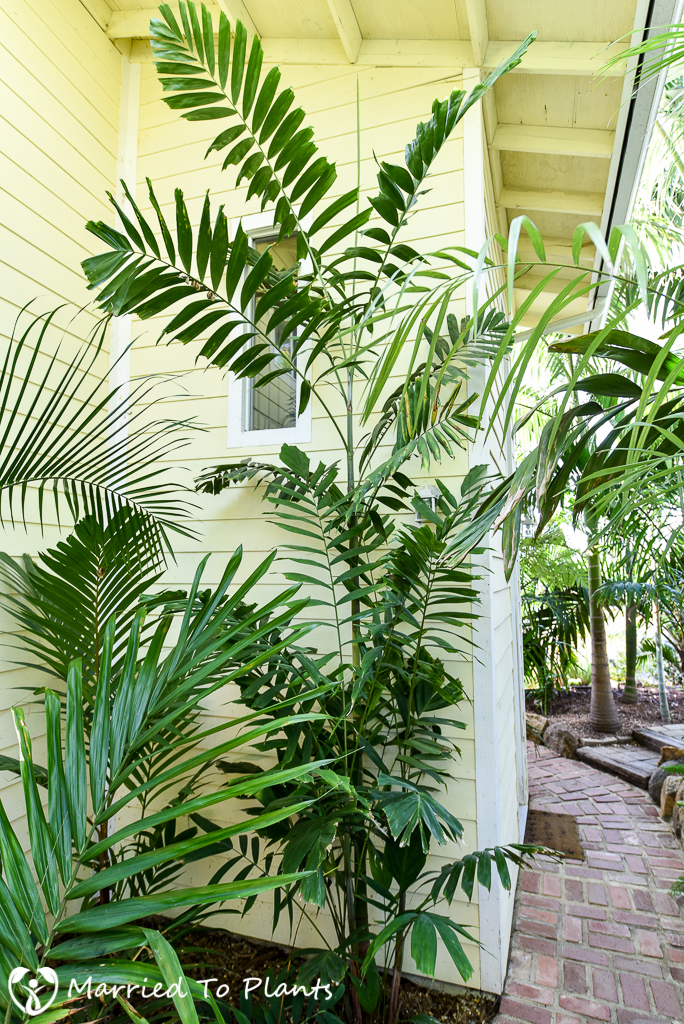 One of Jason’s favorite palms is Dypsis leptocheilos x decaryi. So he had to plant one in the backyard too. 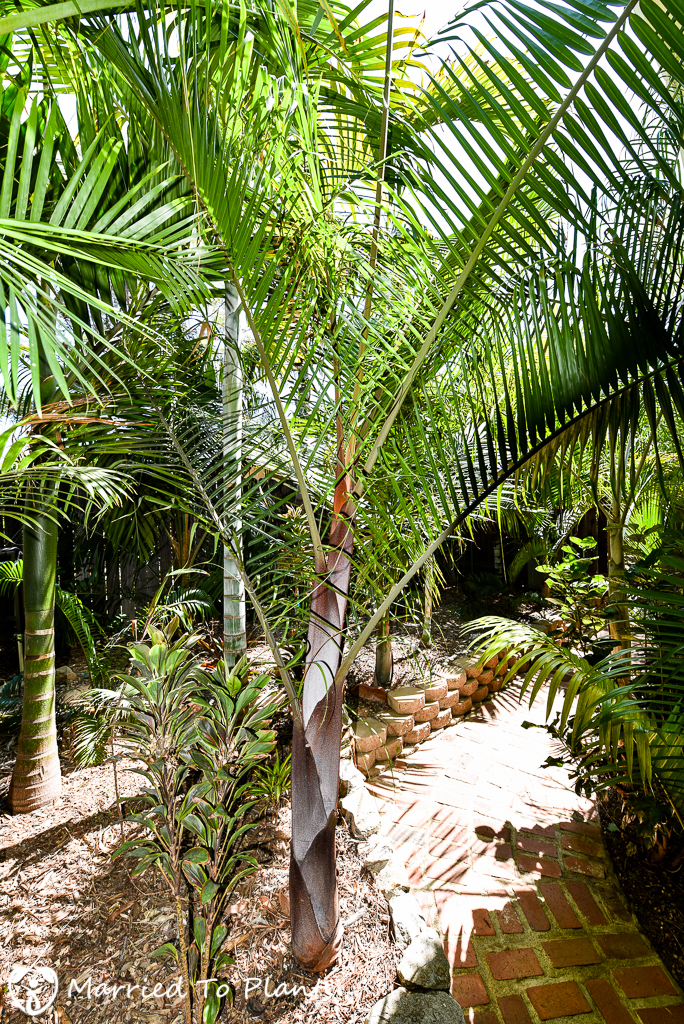 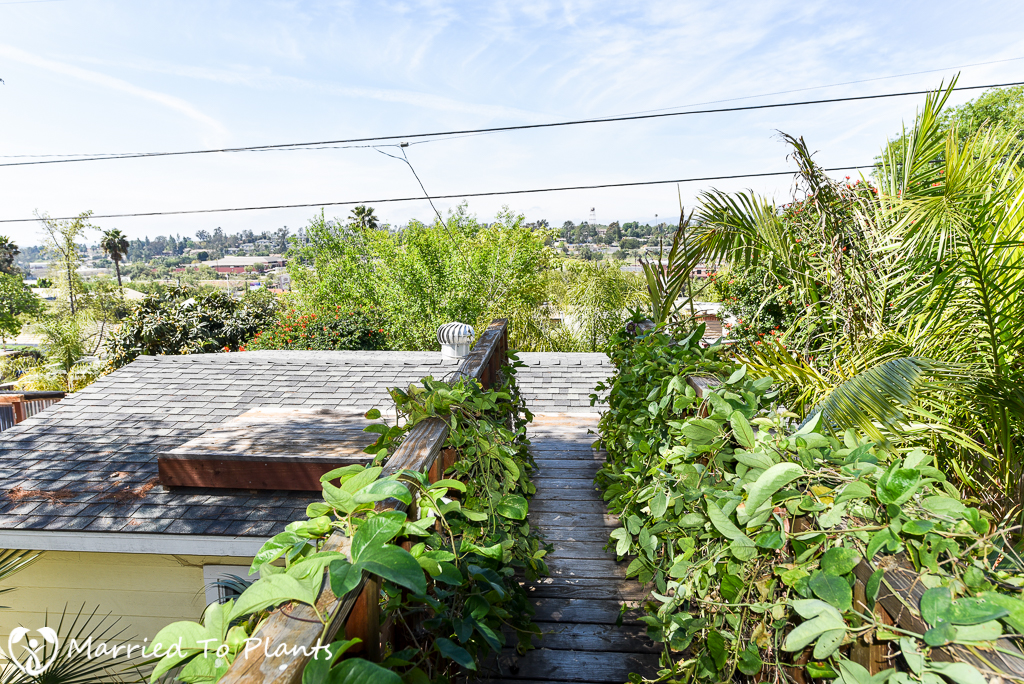 The skybridge gives you elevation so you can experience the garden from a different angle not seen in other PSSC meeting landscapes I have been to. 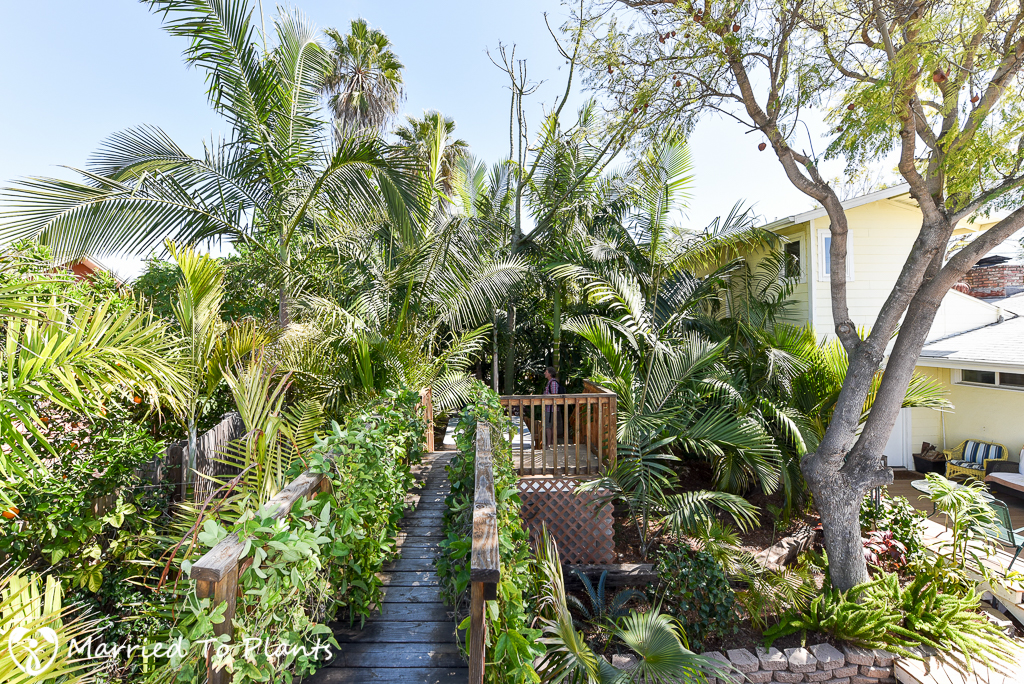 Jason had a few other odds and ends planted in the garden. This includes the blue cycad Encephalartos lehmannii and Agave ‘Joe Hoak.’ 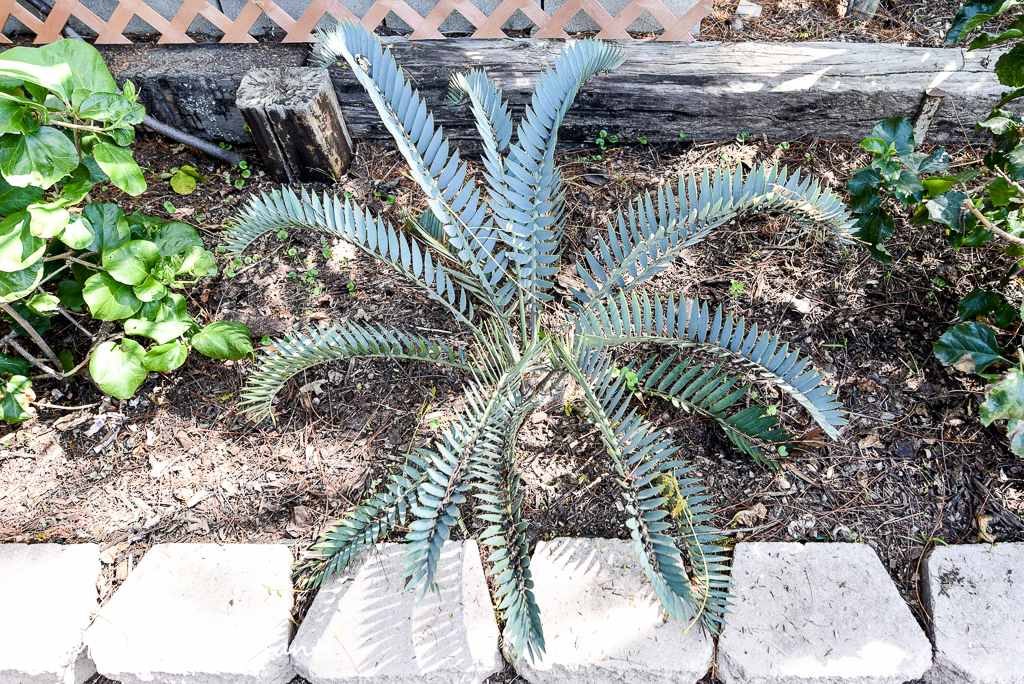 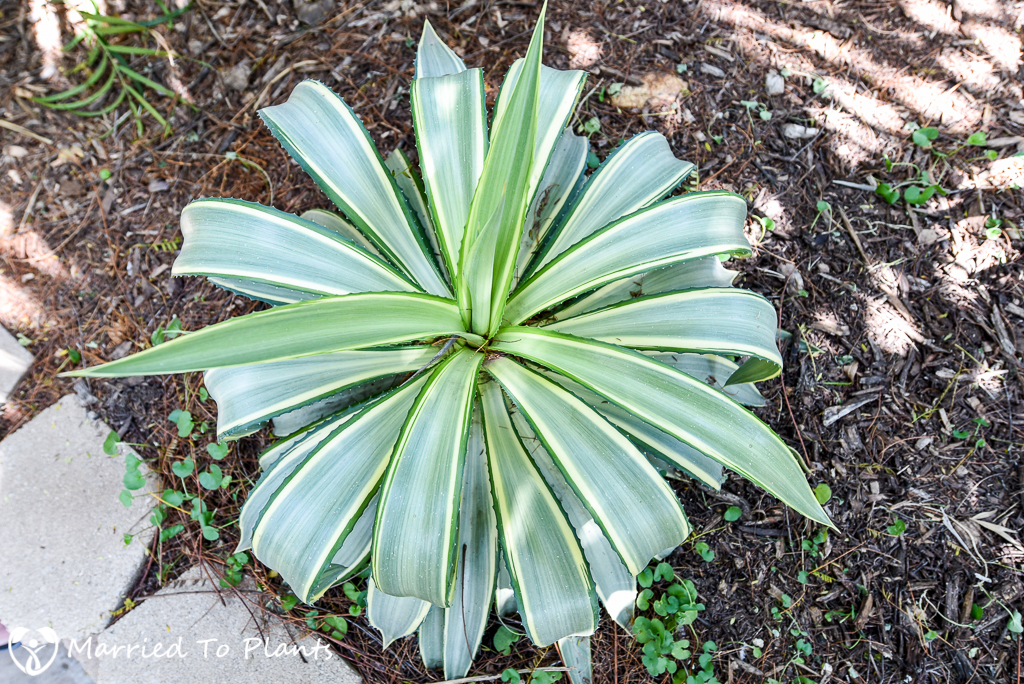 Just under the skybridge you find a sliver of the backyard not under canopy. Here he planted sun-loving caribbean palms like this Coccothrinax spissa to the left and Coccothrinax barbadensis to the far right. 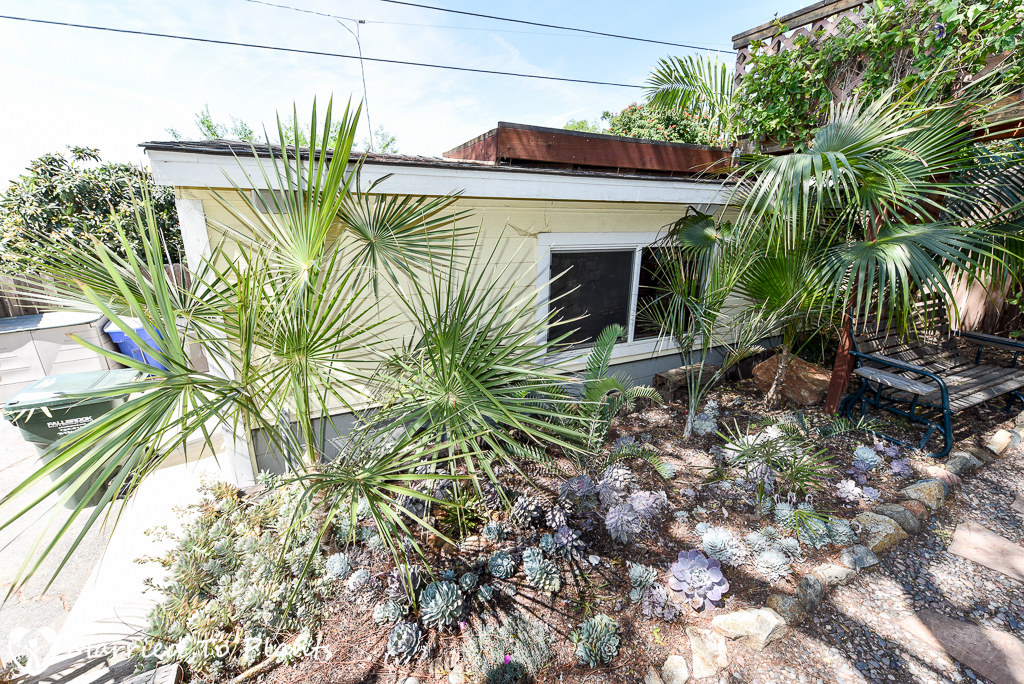 The back patio looks out upon a Rhopalostylis sapida ‘Oceana’ under the canopy of a limbed-up Jacaranda mimosifolia tree. 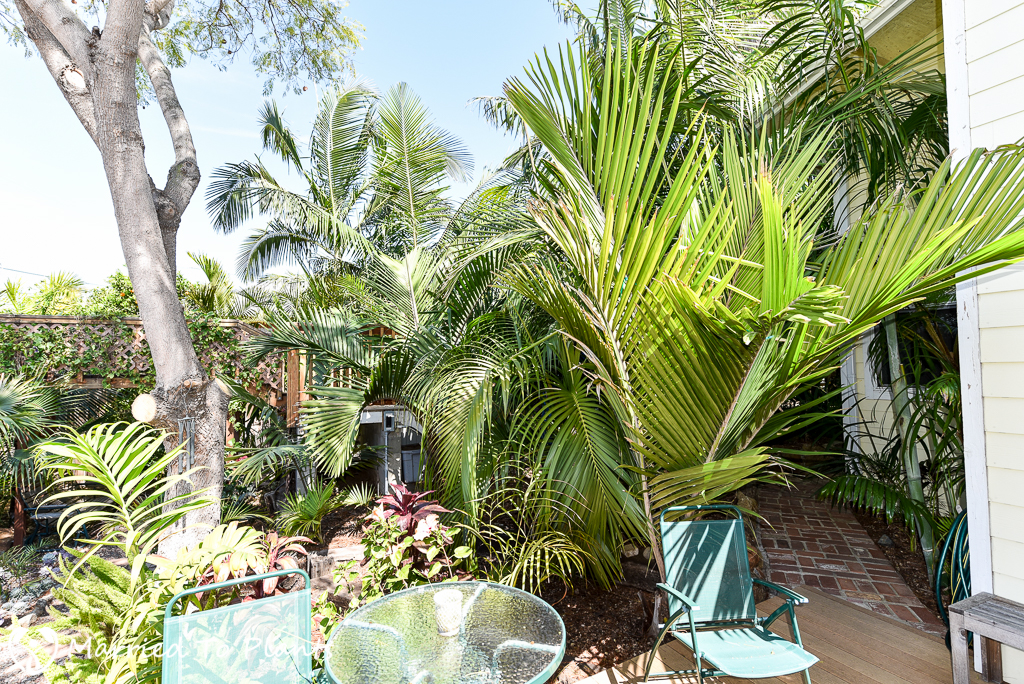 Finally, a picture of our proud owner Jason giving a tour to an enthusiastic PSSC member. Some keen readers might recall seeing his ugly mug before on my blog. Jason linked up with me in Madagascar for a week and could be seen in the Ranomafana post. Having spent a lot of miles in the jungle with Jason I can tell you he is a true palm lover and his beautiful garden and exceptionally grown palms prove it. I would like to thank him for opening up his garden for this spring’s PSSC meeting. 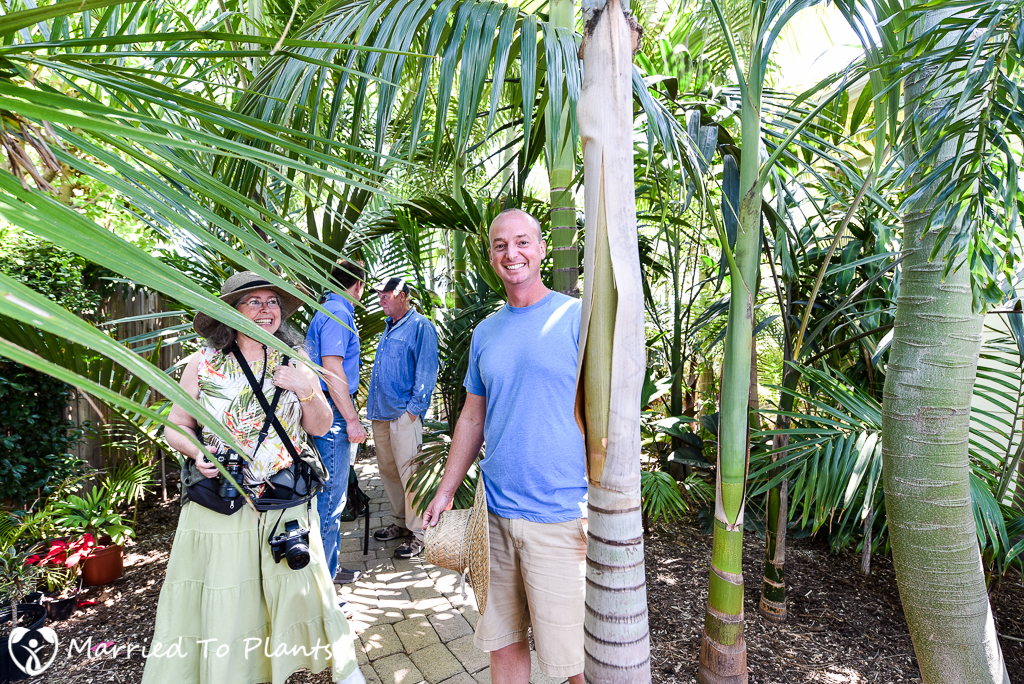