Over the last two days I’ve had the enjoyable pleasure of heading to what is probably my favorite nursery. Rancho Soledad Nursery has been around since 1954 and is the creation of the late Jerry Hunter. The nursery can be found on a 25-acre lot in the rolling hills of Rancho Santa Fe, California. The nursery is most famous for its specimen-sized plants, many of which are decades old. “Rancho Soledad” started with a focus on the more tropical plants such as palms, cycads, ferns, bromeliads, and flowering trees. In fact they still own “Palms of Paradise” in Hilo Hawaii, which is their growing grounds for the large, tropical stuff they ship in on containers by sea. Within the last ten years or so they have transitioned into the premier spot for water-wise plants like agaves, aloes, and other succulents. Considering that the four plants I most like to see in gardens are palms, cycads, aloes, and agaves, how can I not have such an admiration for a nursery such as this?

The entrance is such a familiar sight for so many who have traveled under it.

This is the weekend sales area, displaying many of the plants Rancho Soledad grows. The Euphorbia in the middle is called “Jerry’s Choice” and is named after the former owner Jerry Hunter.

A nice display in front of the Rancho Tissue Technologies building onsite. It is headed by Jerry’s daughter, Heather May. It is one of the largest tissue culture providers in the world. 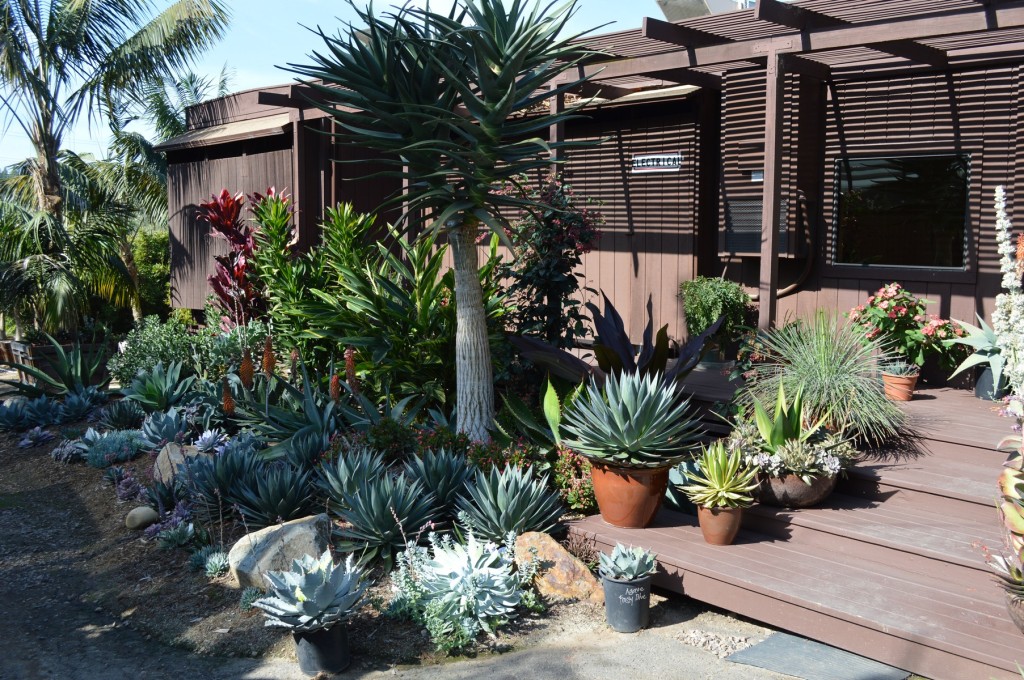 A few years before his death, Jerry had a hillside turned into a beautiful xeric display. 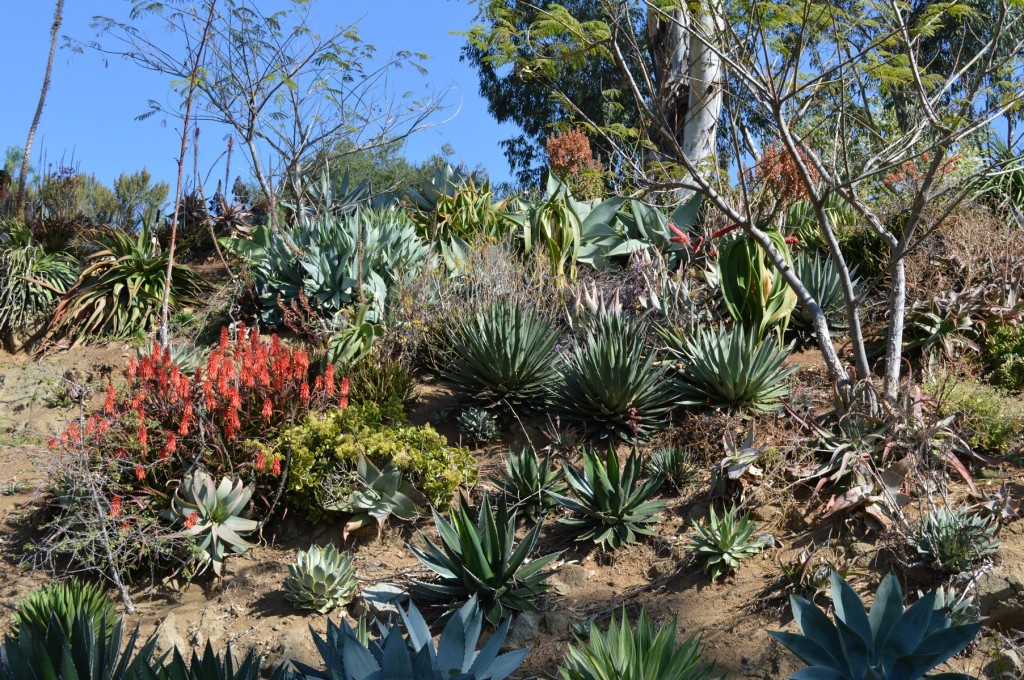 Jerry would love to take buyers through the display on his golf cart. I had the pleasure to run through it a few times and listen to the many stories Jerry shared. His knowledge of plants was second to none. 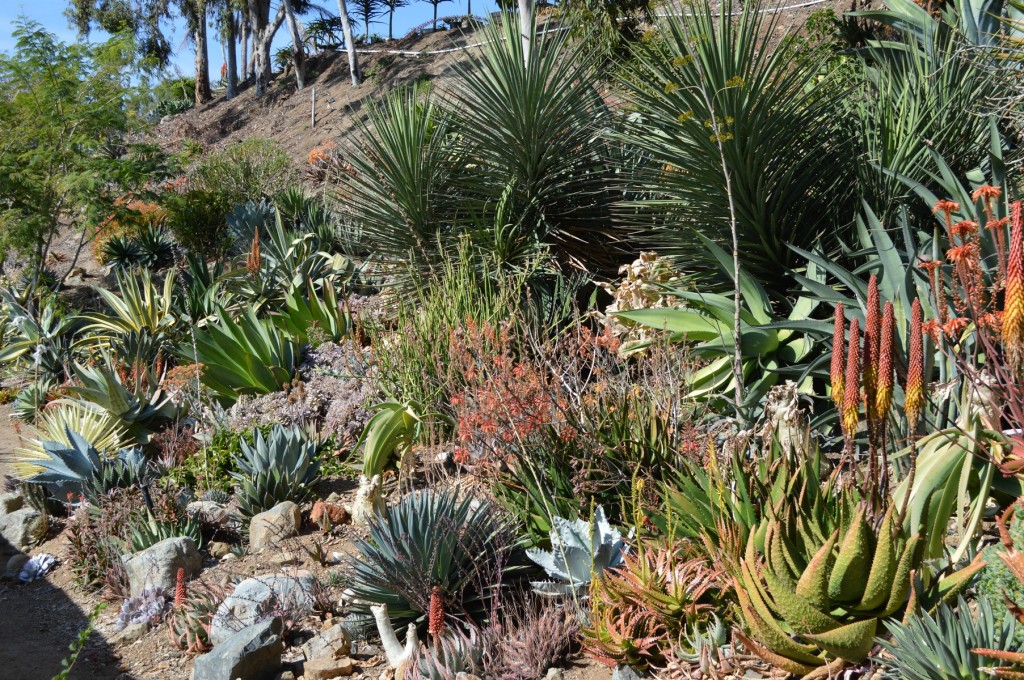 Aloe marlothii in flower in the xeric display. Notice the black peduncle on the flower? This form was once called Aloe spectibilis, before being moved to Marlothii.

This is a nice collection of flowering Aloes for sale.

Along with some more green Encephalartos found in the back, you can see two large Dioon spinulosum for sale in the center of the picture. Price may vary, but expect to pay $1,000+ to own one. 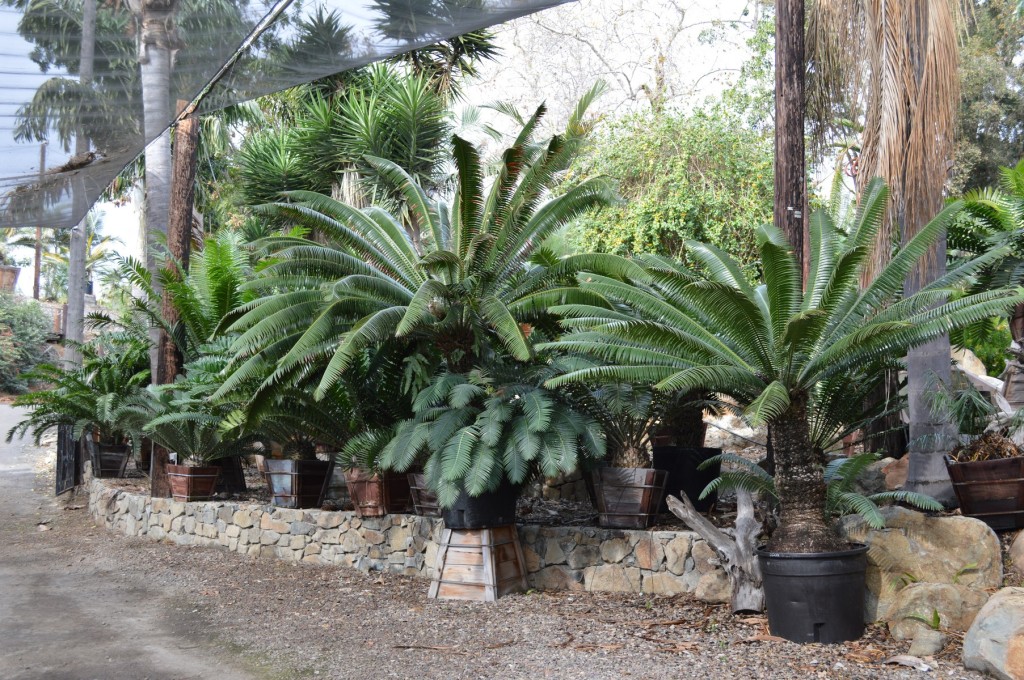 This is the lower Aloe and Agave lot of Rancho Soledad Nursery. You can also see they sell sun-grown Howea forsteriana (Kentia palm).  Some are 20-30 years old. 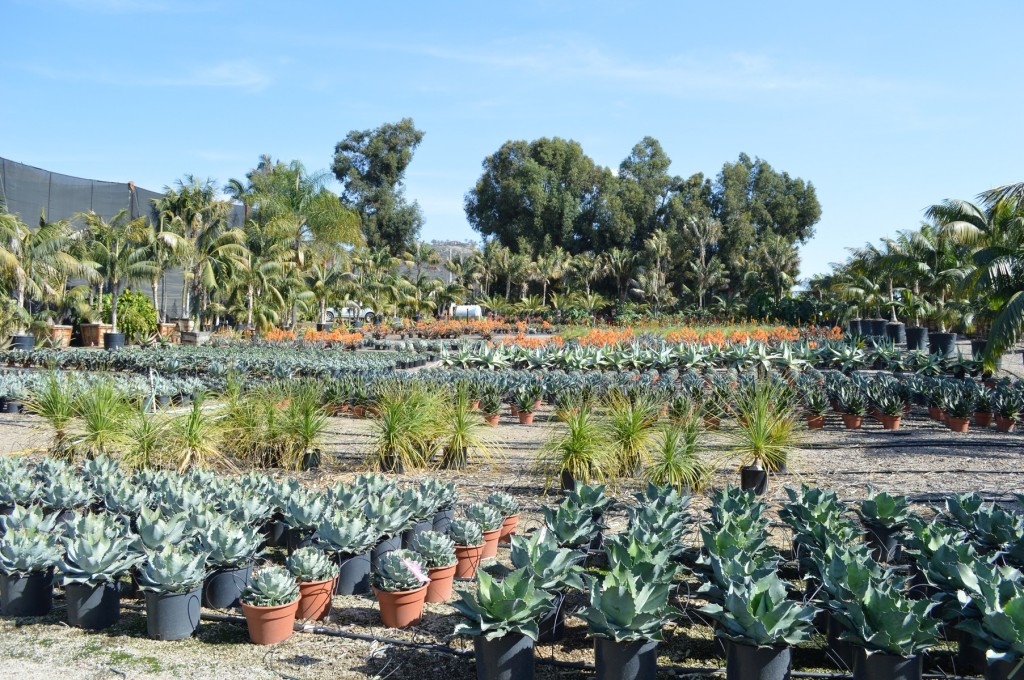 Some plants found in the upper lot of Rancho Soledad Nursery. This is the view facing east; in the background you can see the million-dollar homes creeping up. 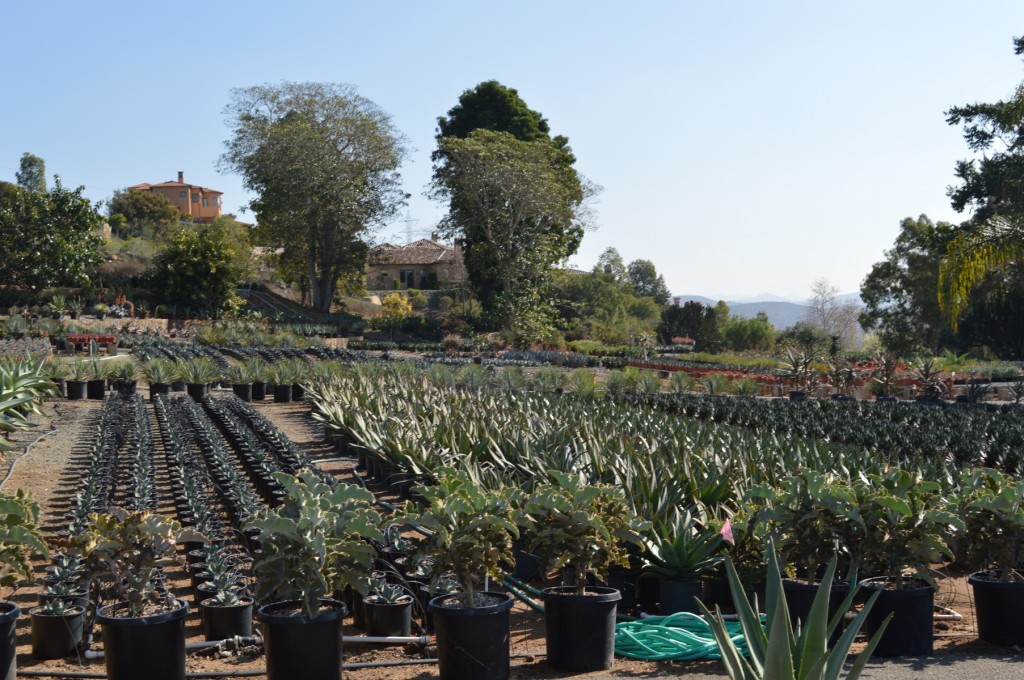 This is a view facing West of the enormous upper lot. There are thousands of exceptionally grown plants for sale in this lot. With a good eye you can see a towering Aloe vaombe flowering. See it?

Here is the Aloe vaombe up close. It is easily one of my favorites of all the solitary tree aloes. It is flanked by Aloe dichotoma on the left and a young Aloe barberae x dichotoma ‘Hercules’ on the right. 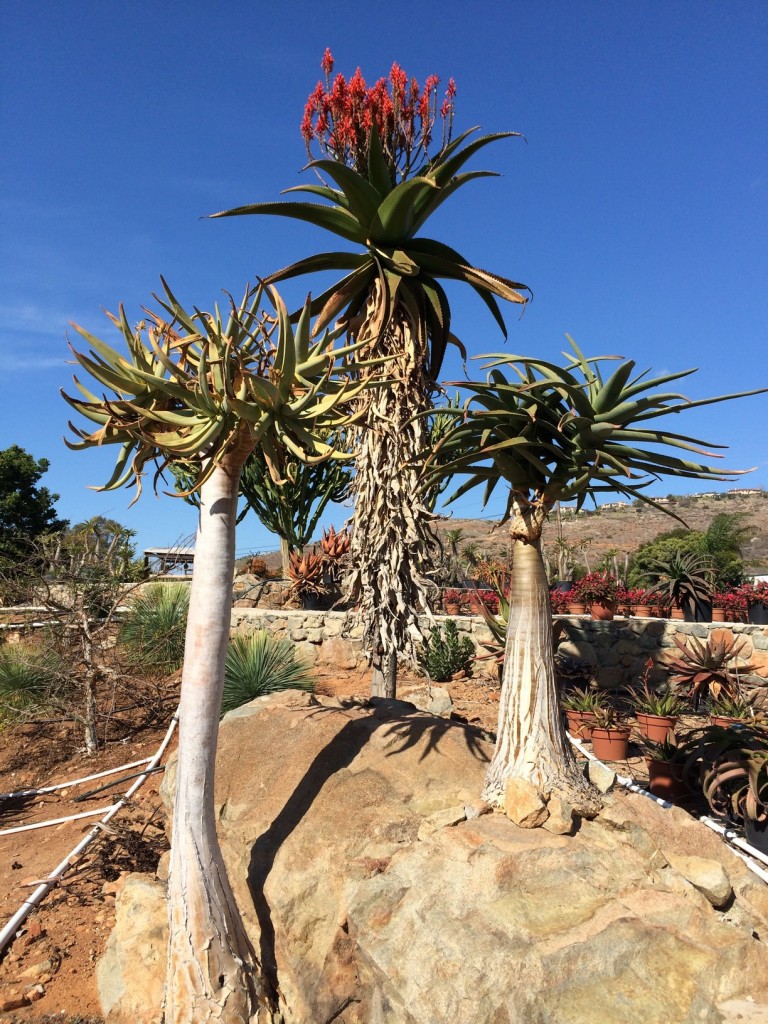 This greenhouse is used to grow many of the plants that came from tissue culture; it is one of many such greenhouses. It doesn’t take the plants long to outgrow their plugs in this humid hothouse. 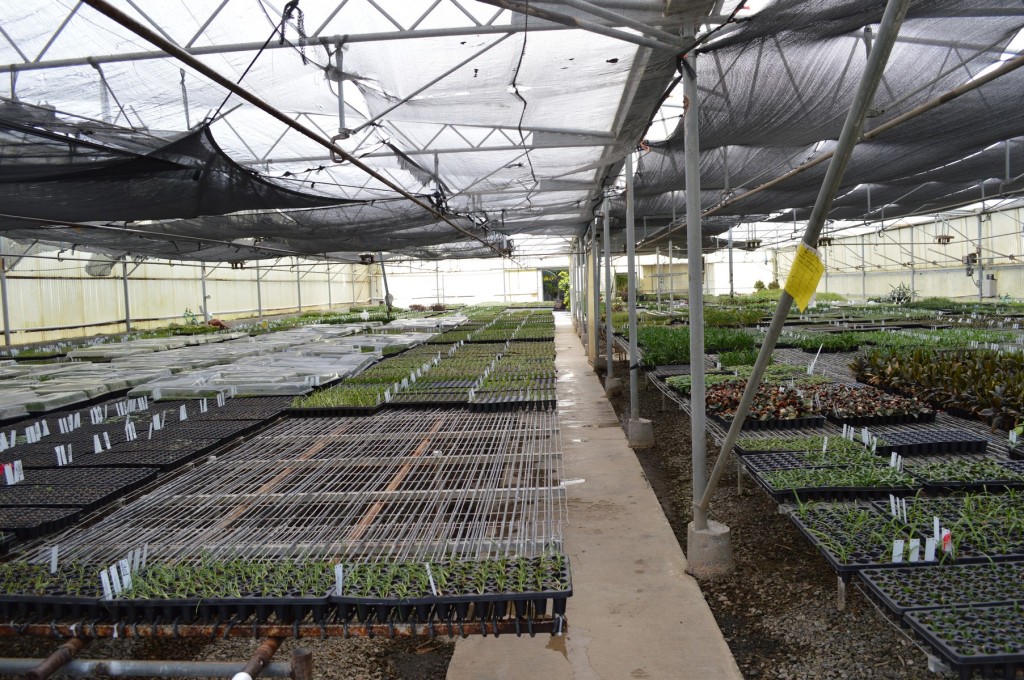 Some of the thousands of Bromediads that can be purchased from Rancho Soledad Nursery.  They import large Alicanterea imperialis from Hawaii for resell.

Another greenhouse with Bromeliads. Most plants in this greenhouse are not for sale, as it is a propagation center. 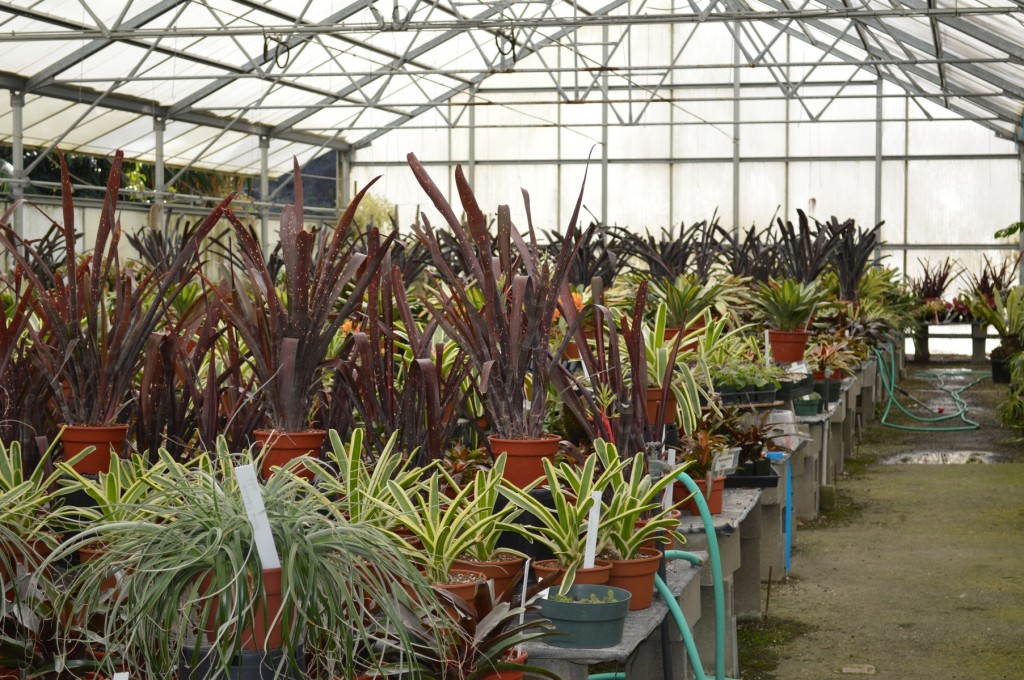 A picture of some nice Variegated Monstera deliciosa (Swiss Cheese Plant) for sale. These were shipped over from Hawaii by sea. Just some of the thousands of plants that arrive each year by container. 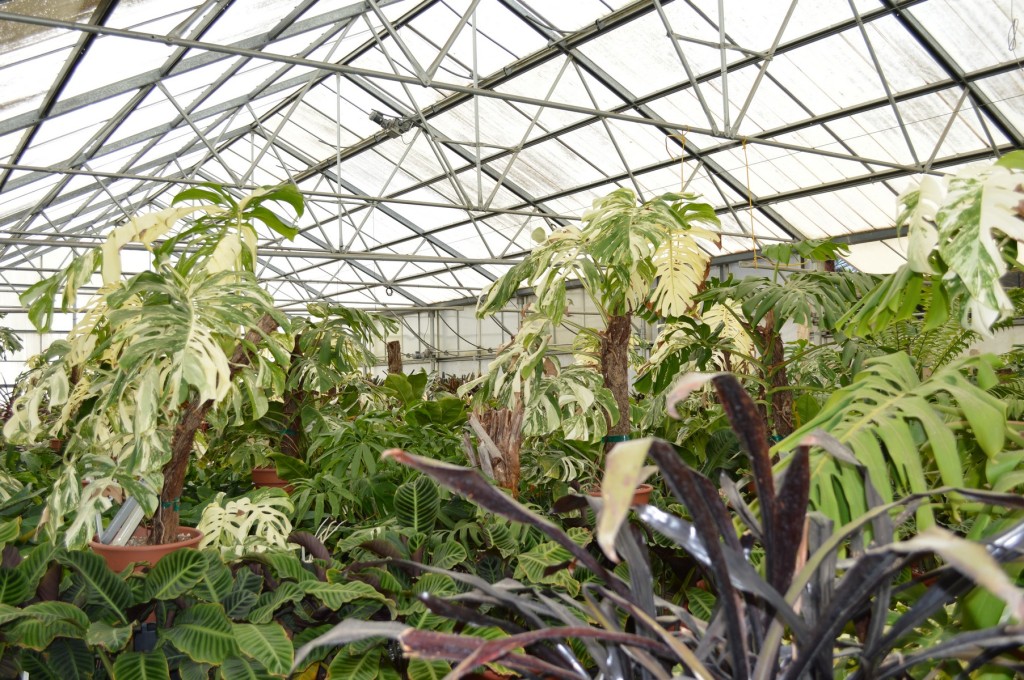 Variegated Schefflera pueckleri (aka Tupidanthus calyptratus) makes for an excellent accent plant in the garden. It handles quit a bit of sun for a plant with so much variegation. The palm trunks you see are of the Foxy Lady Palm (Wodyetia bifurcata x Veitchia joannis). 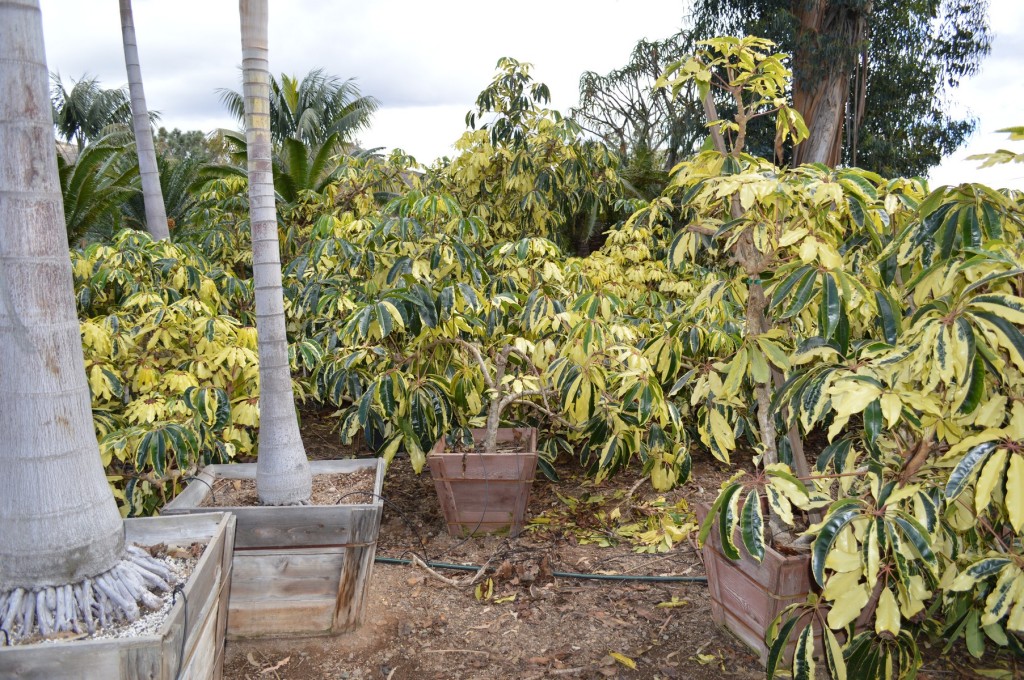 A nicely grown Ficus elastica ‘Variegata’ for sale. These trees are not fast growers here in our Mediterranean climate. 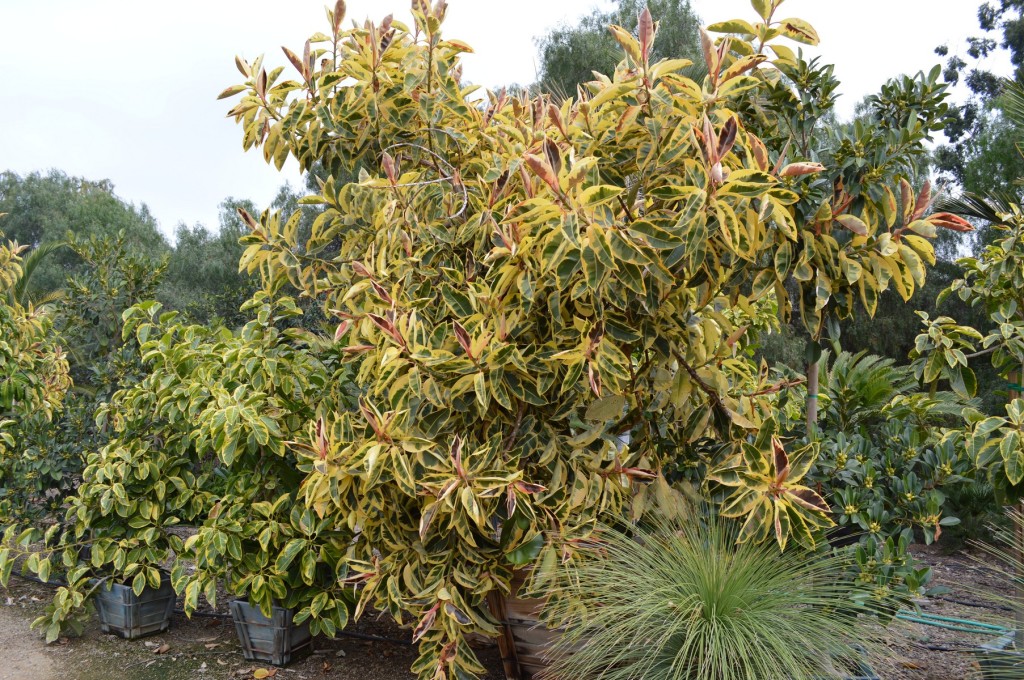 This Tabebuia impestiginosa is flowering early thanks to our record-breaking warm winter. 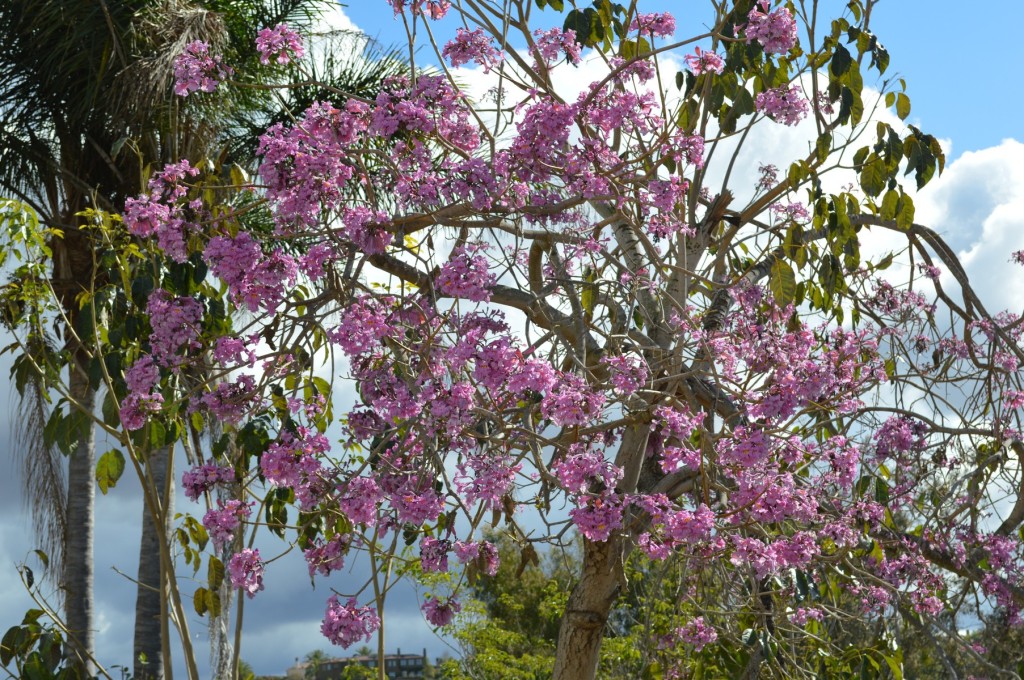 Don’t ask me how, but this old Toyota truck still gets around and is used to pick up clients’ plants and bring them to checkout. I wonder if it meets today’s smog standards?

A Rancho Soledad Nursery tour wouldn’t be complete without showing what we purchased. The final picture shows that old Toyota and all the plants it brought down to us. These plants are going to a landscape job I am helping a friend with. 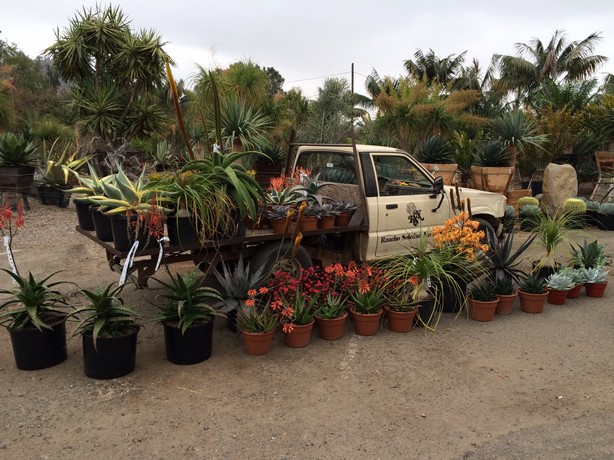 I could easily keep adding photos of this wonderful nursery but I have to stop somewhere. Plus I’ll be back many more times and will add new posts over the years about Rancho Soledad Nursery and their plants.

If you are ever in the area it is well worth it to make a stop and do your own Rancho Soledad Nursery tour. Every time I go back I find something new.