Last week spring break was in full effect, and with that came the challenge of keeping the kids busy. But let’s be honest, I live in San Diego, so it really isn’t that much of a challenge. Plus our yearly memberships to Legoland, Sea World and the San Diego Zoo certainly come in handy here. Last Monday we decided to start the week off with a trip to San Diego Zoo Safari Park as their annual “Butterfly Jungle” live exhibit was open from March 14th – April 12th. With dad 100% in charge of the operation we ended up getting a late start. We didn’t arrive at the park until 11:00 AM and by the time we got to the exhibit the line was well over an hour long. Considering Butterfly Jungle saw over 77,000 visitors last year, I most likely should have known to arrive earlier. So with a promise to my daughter to return on Wednesday, we toured other parts of San Diego Zoo Safari Park that day.

Fast forward to last Wednesday and with a 7:00 AM wakeup from my excited daughter, we made the exhibit right when it opened at 8:00. Look: no line. 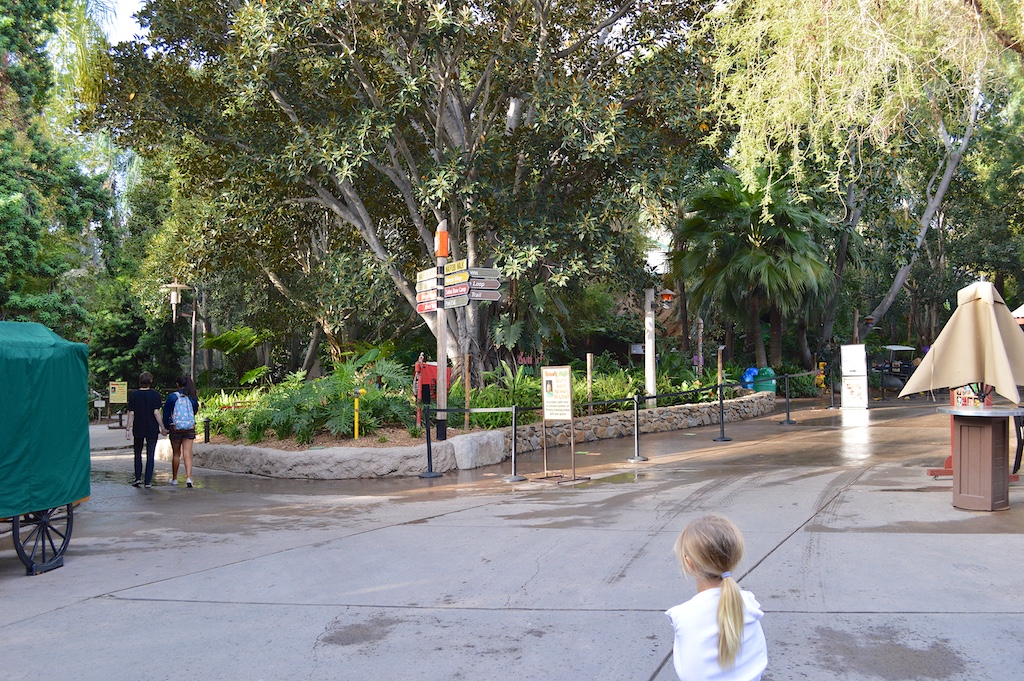 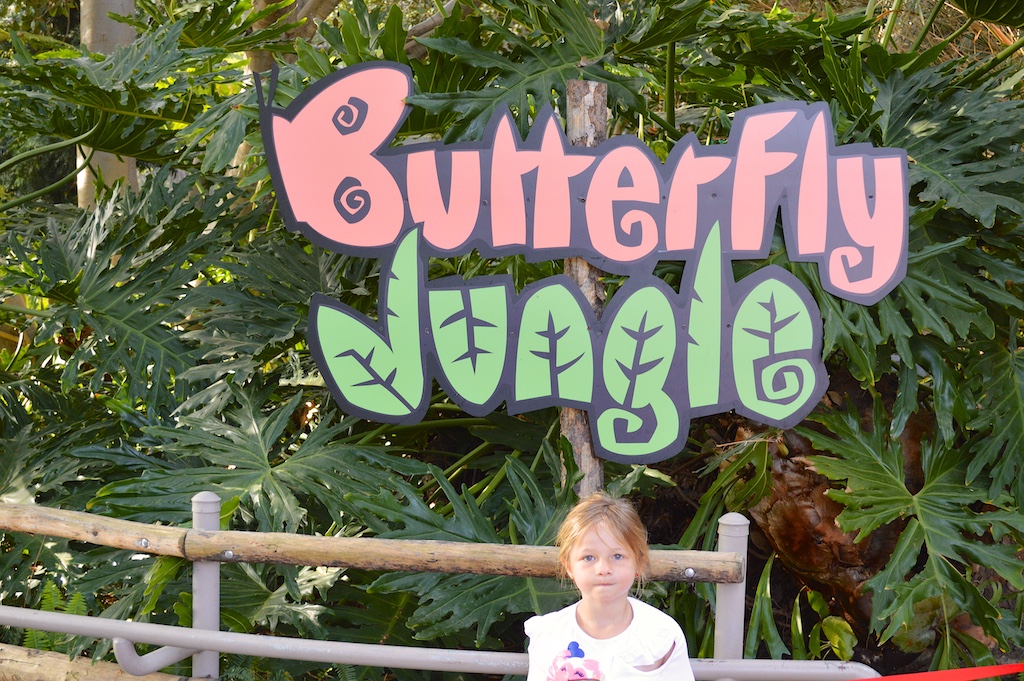 This year the exhibit had close to 40 species of butterflies. While that might seem like a lot, when you consider that there are approximately 20,000 species of butterflies in the world, it really is a drop in the bucket. However, the amount of work it takes just to get the Butterfly Jungle working is impressive. Just for starters, the San Diego Zoo Safari Park has to import about 10,000 pupas from around the globe, to include Africa, Asia plus Central and South America. 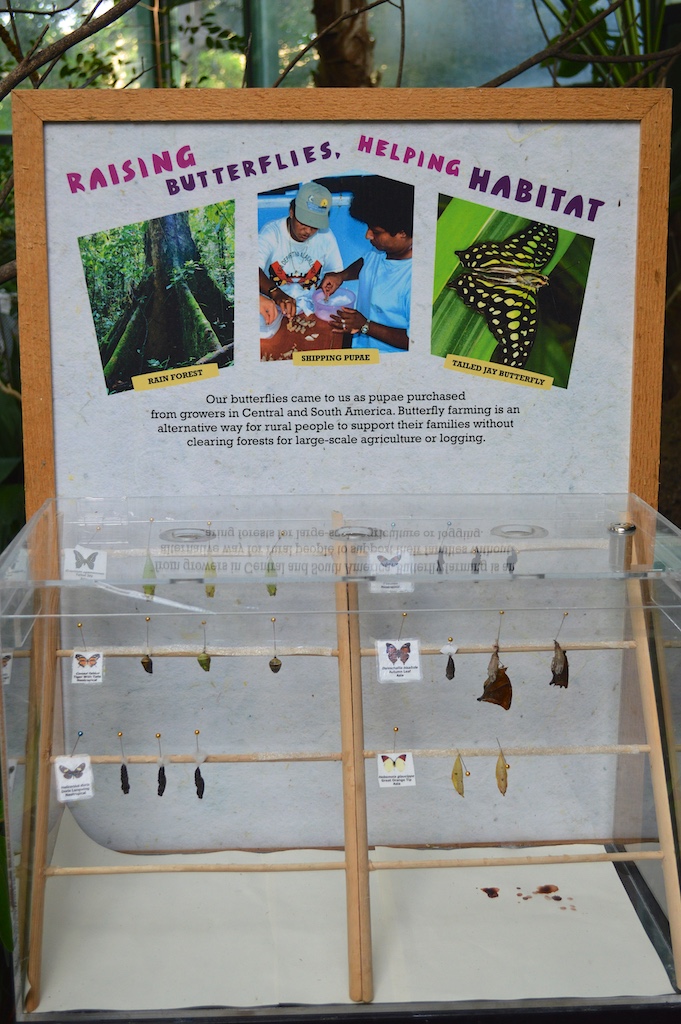 Butterfly Jungle uses the park’s Hidden Jungle two-story glass greenhouse and aviary for its exhibit. The greenhouse is temperature-controlled, which makes for a butterfly paradise. It also makes it cozy for the hordes of people that jam in. This is the view 30 minutes after we had the place virtually to ourselves. 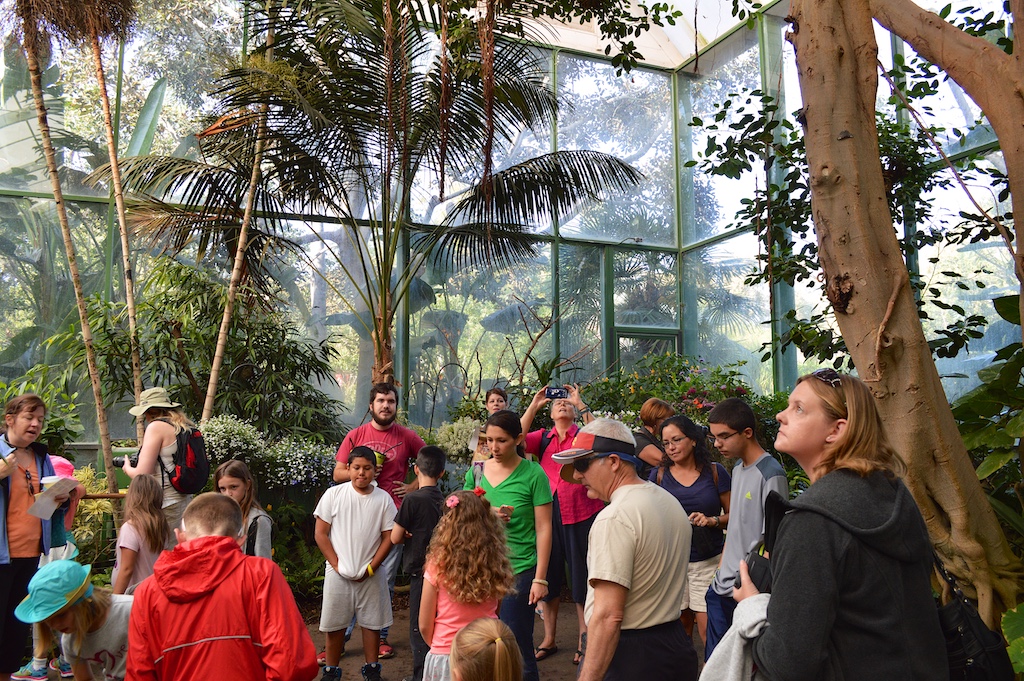 To help feed the inhabitants of Butterfly Jungle, it is filled with different flowers like Impatiens, Heliotrope, Verbena, Pentas, Lantana and Porter Weed. The park still needs to supplement with nectar-feeding stations as well. 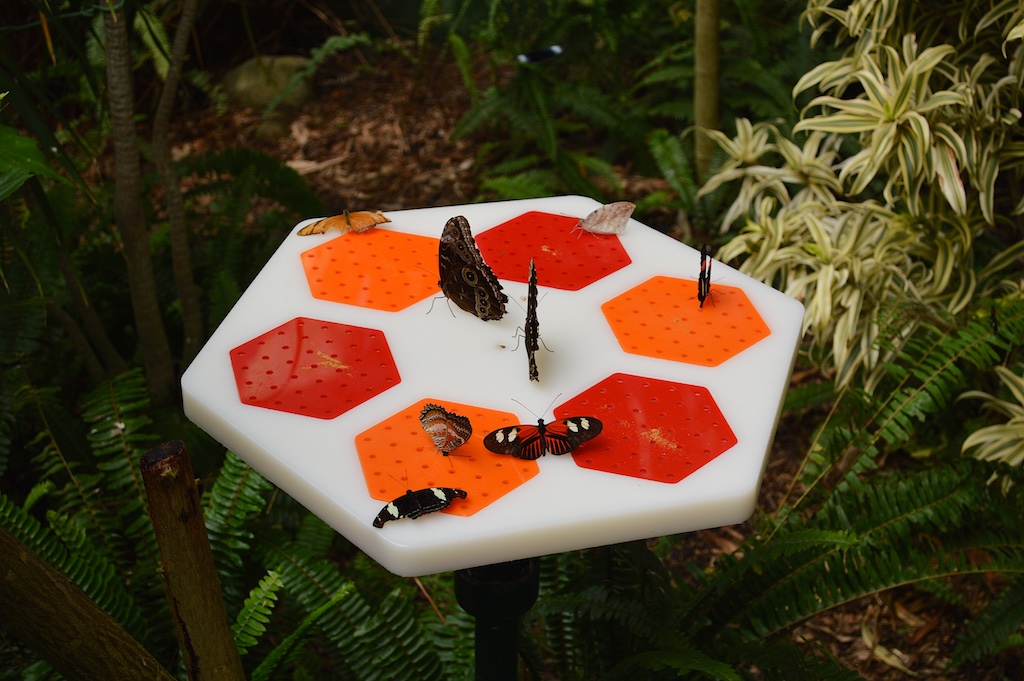 Next to one feeding station was the Monarch butterfly lifecycle display. However, if you went to Butterfly Jungle to see a Monarch Butterfly, you might have been somewhat disappointed, as there weren’t any due to some issue this year. 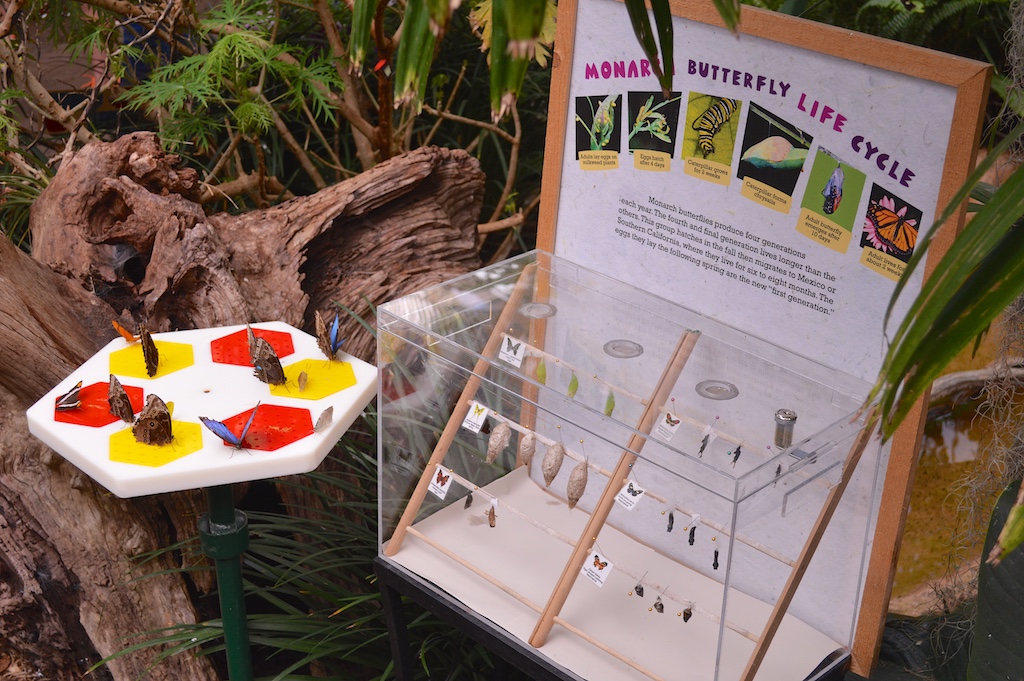 Now to get to the reason why myself and the other 77,000 people visit—the butterflies. As I pointed out earlier, I was told by one of the volunteers that this year they had almost 40 species on display. I think if you were to poll people as they left and ask which butterfly was their favorite, most would choose the Common Blue Morpho (Morpho peleides). 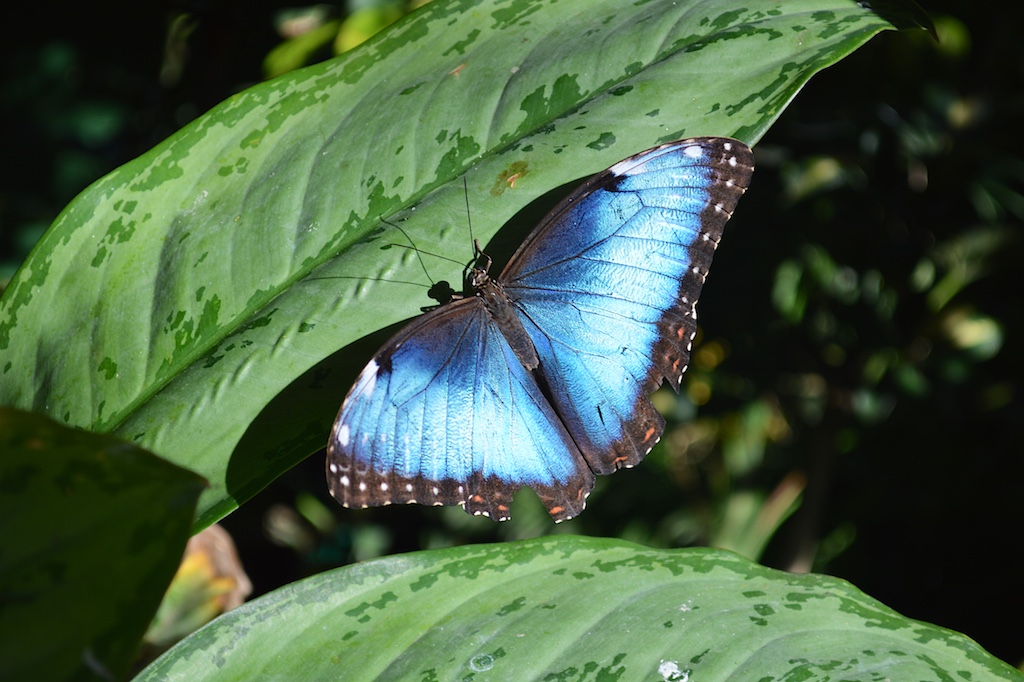 Certainly beautiful, but not often found with its wings opened like in the photo above. What makes this guy so popular is its gregarious nature. I would venture to say it is nearly impossible to walk through the exhibit and not have one land on you. 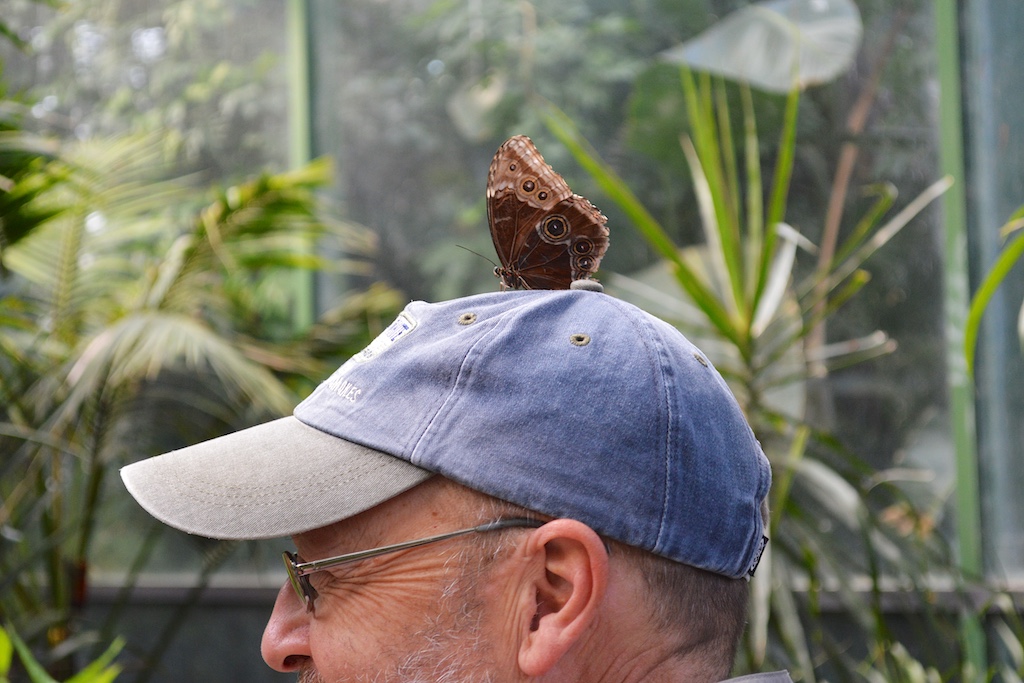 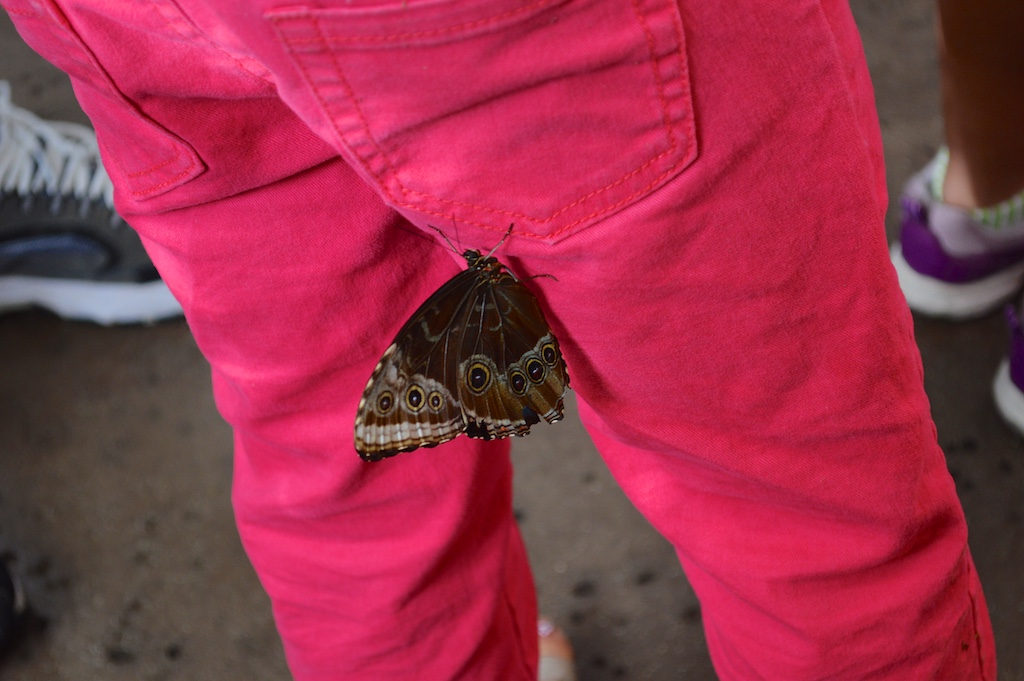 Often confused with the Blue Morpho, the Giant Owl (Caligo memnon) gets its name from their huge eyespots, which resemble owls’ eyes. Like the Blue Morpho, it is also from Central and South America. 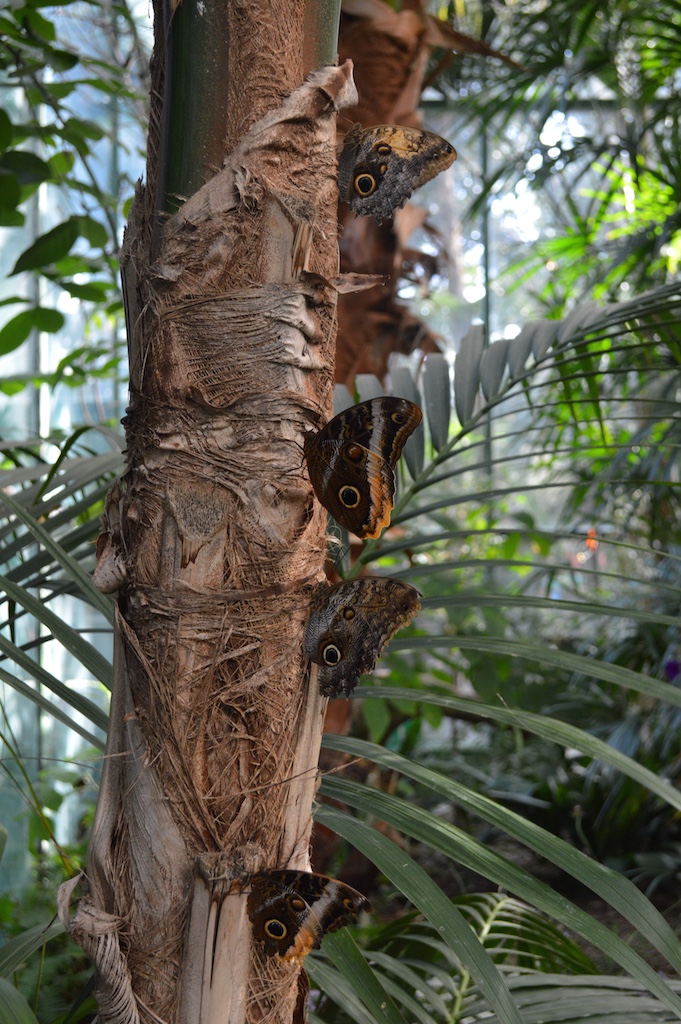 The most abundant butterfly we saw during our visit was the Postman (Heliconius melpomene). It actually comes with a few different markings as shown below. The first picture being the more common marking.

Another Butterfly Jungle regular is the Orange Julia (Dryas julia). 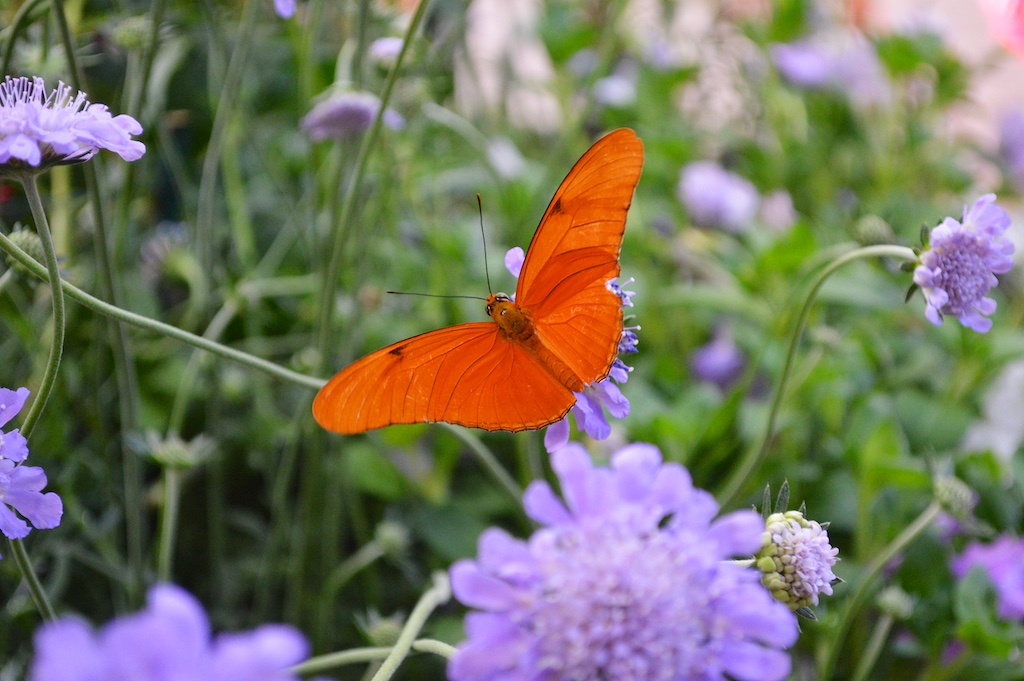 The closest thing to the Monarch was the Paper Kite (Idea leuconoe). 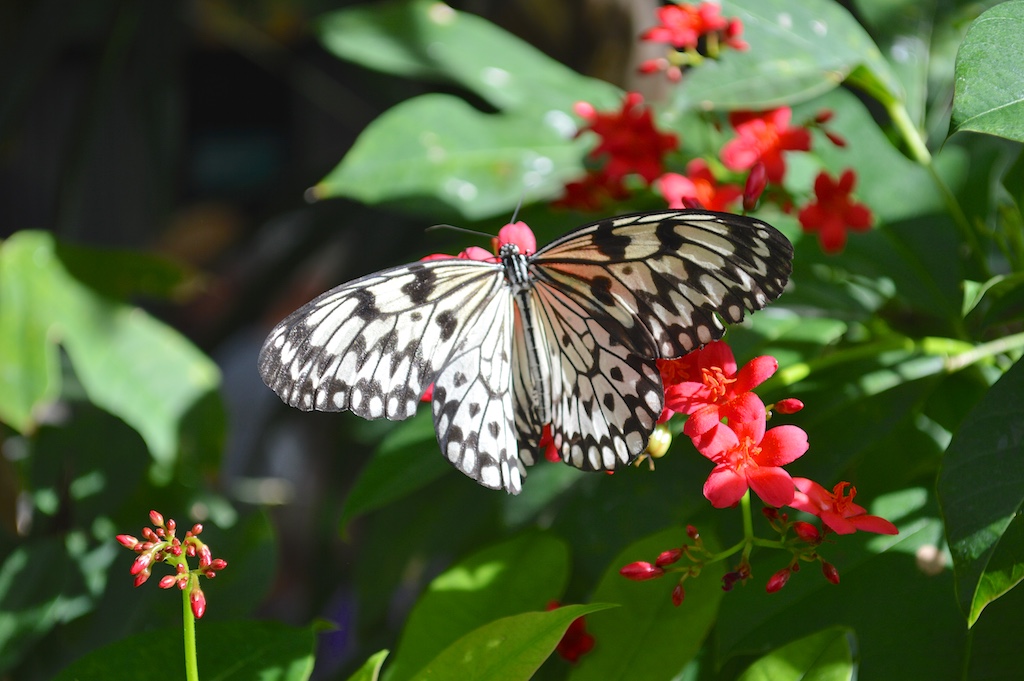 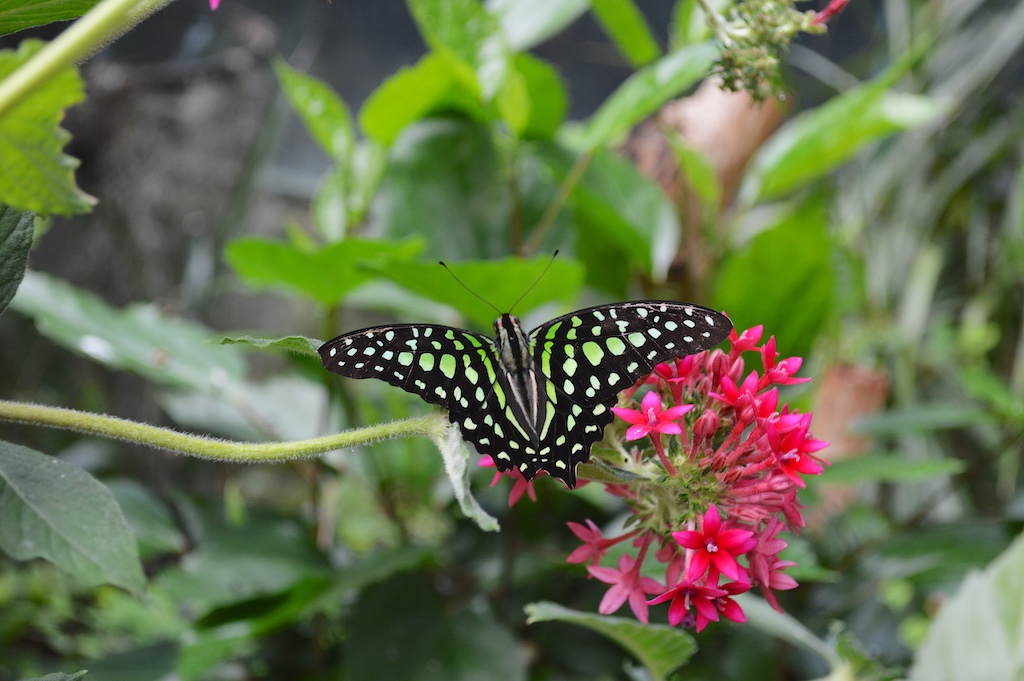 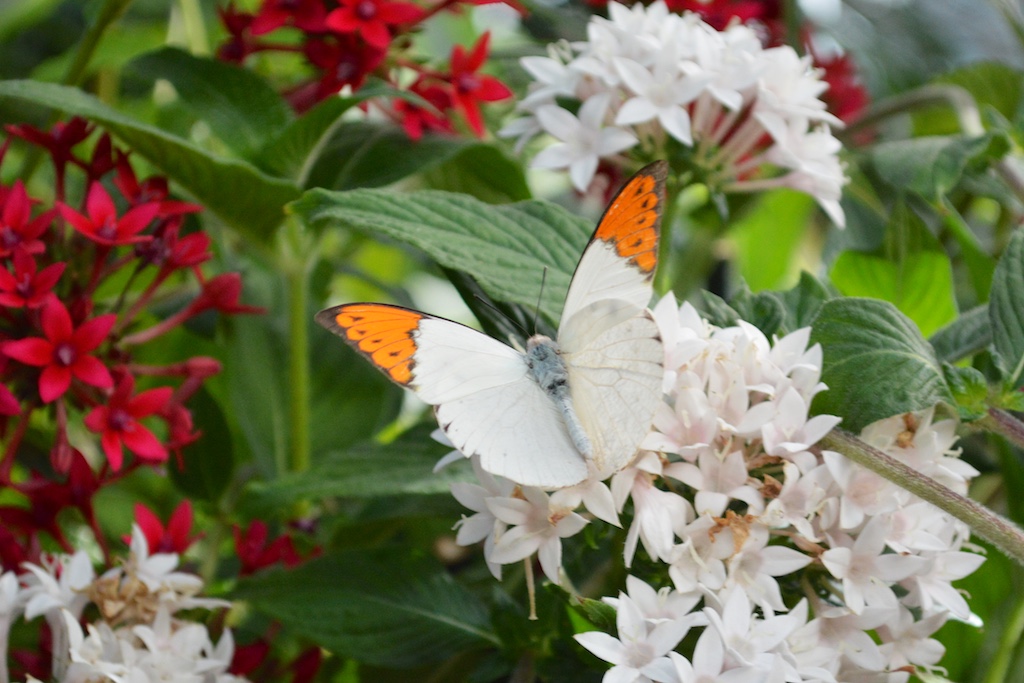 I had to use my long range lens for this guy. It was the only one I saw all day, and he was hiding on the glass away from every one. It is a Tiger Longwing (Heliconius hecale).

Another butterfly of which I only saw one all day just happened to land on this little girl’s hand. She put it on the ground in the sun, which allowed for a better photo. This was one of my favorites of the day: the Grecian Shoemaker (Catonephele numilia). 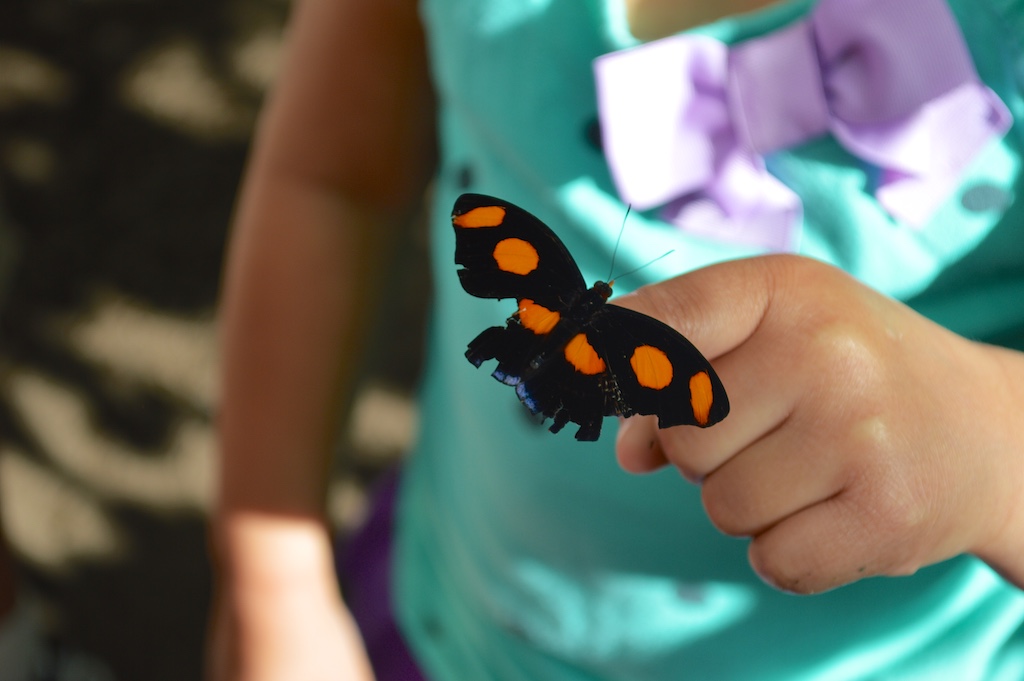 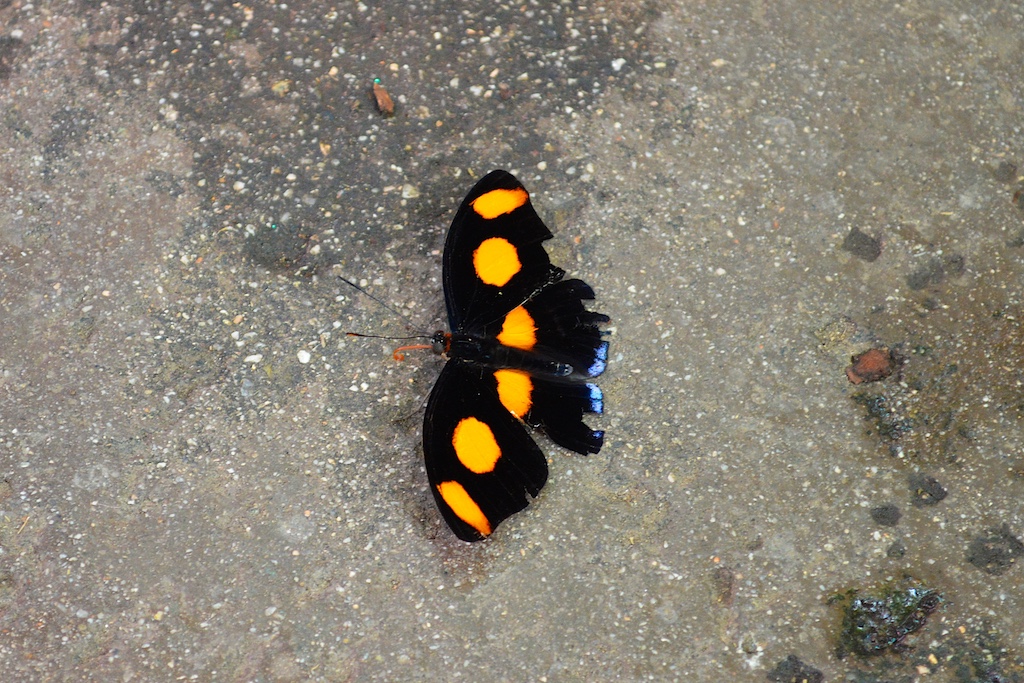 If I had an opportunity to make a suggestion to the curator of the exhibit, it would be to make available a master list of the all the species found in the Butterfly Jungle. This master list could be placed on their website for nerds like me that have to ID everything. Unfortunately, the “Butterfly I.D. Guide” they offer only had 14 species listed, so the rest of my photos come with no identifications. If anyone knows what they are, please let me know in the comments section below so I can update my blog entry.

The next four photos show what could either be four different species or most likely, as with the Postman Butterfly, one species that comes with a few different markings. 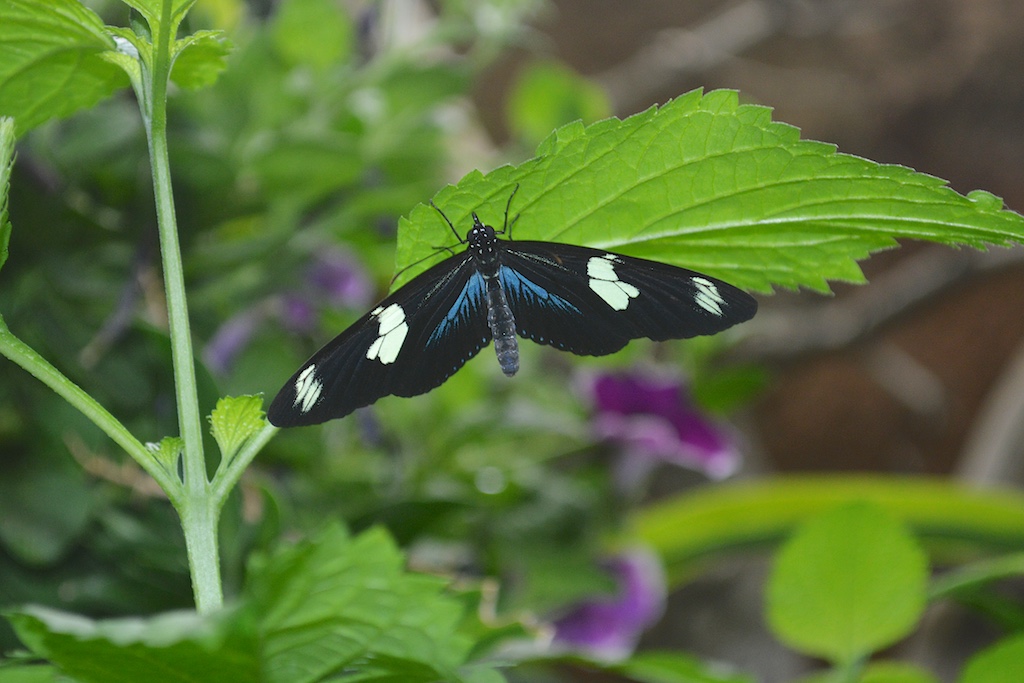 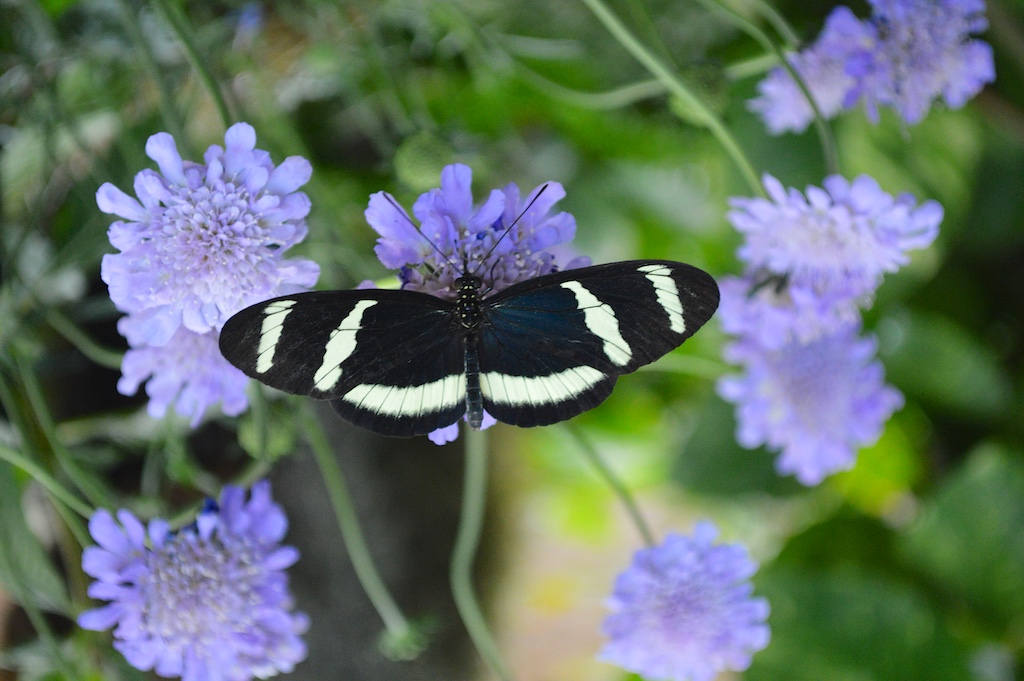 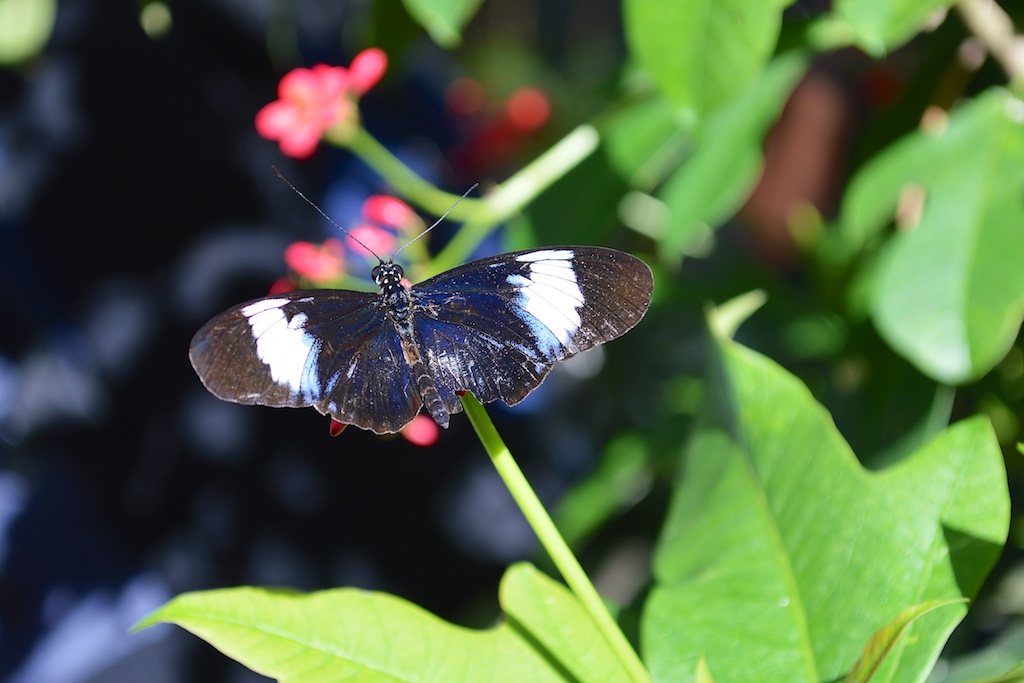 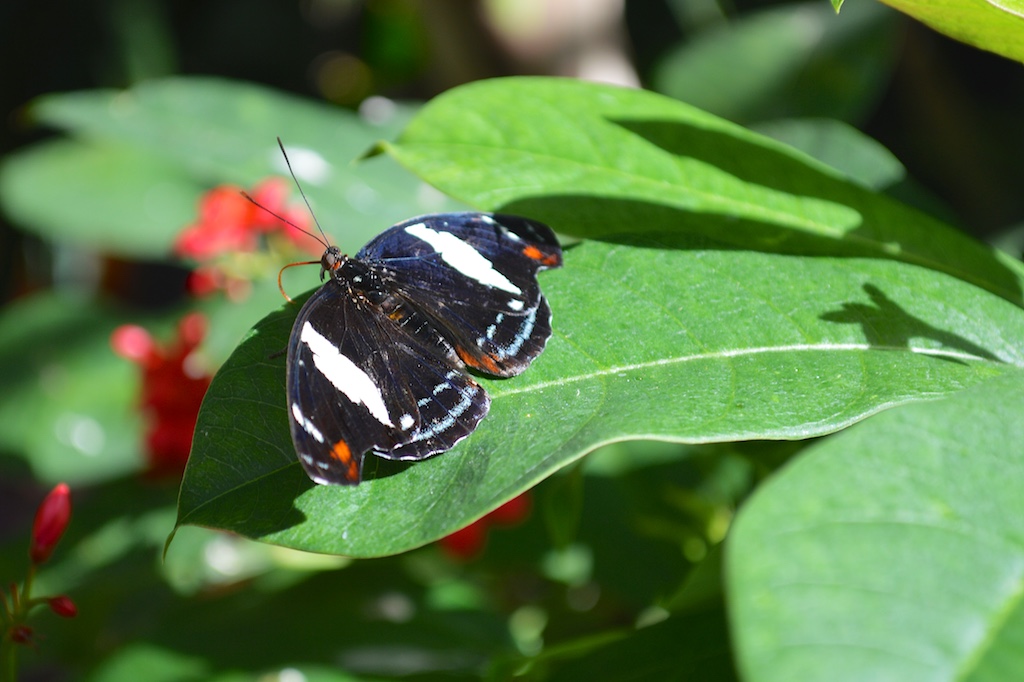 The pretty butterfly was getting a drink of water right in the middle of the walkway. After watching him almost get stepped on a few times, my daughter helped him move to safer ground. 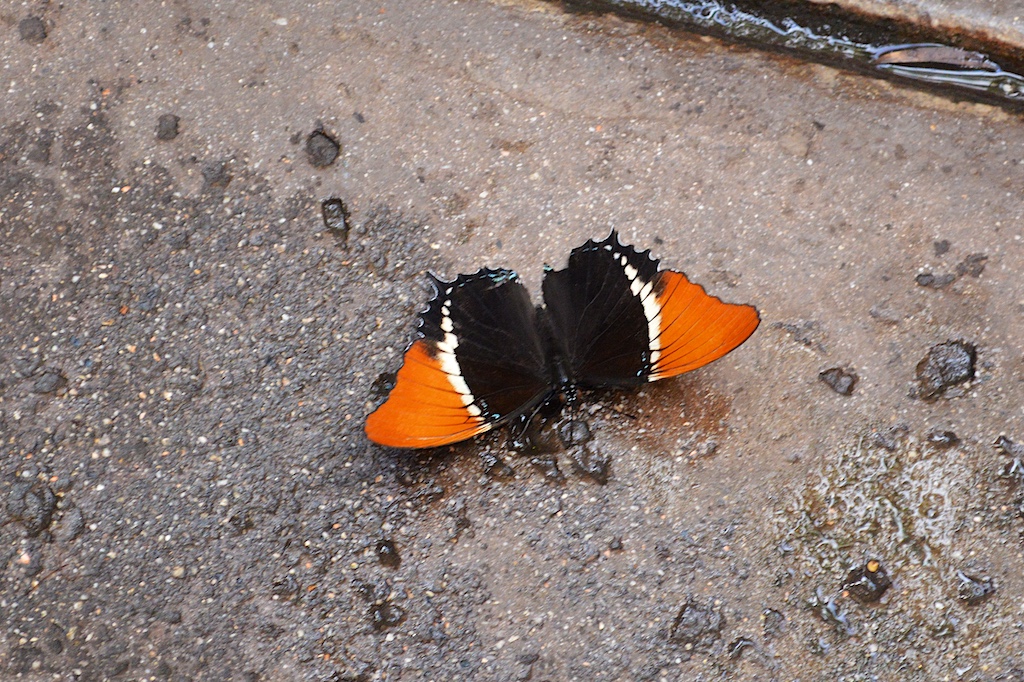 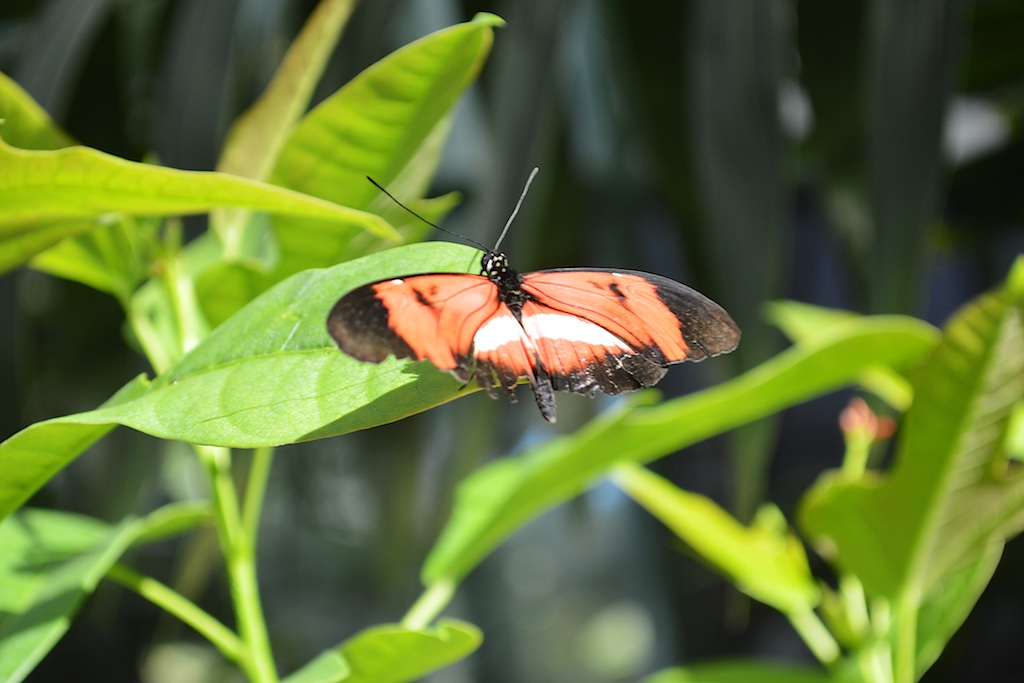 Nope, not an Orange Julia. A volunteer told me the name but I forgot it. Apparently it is not a common sight. 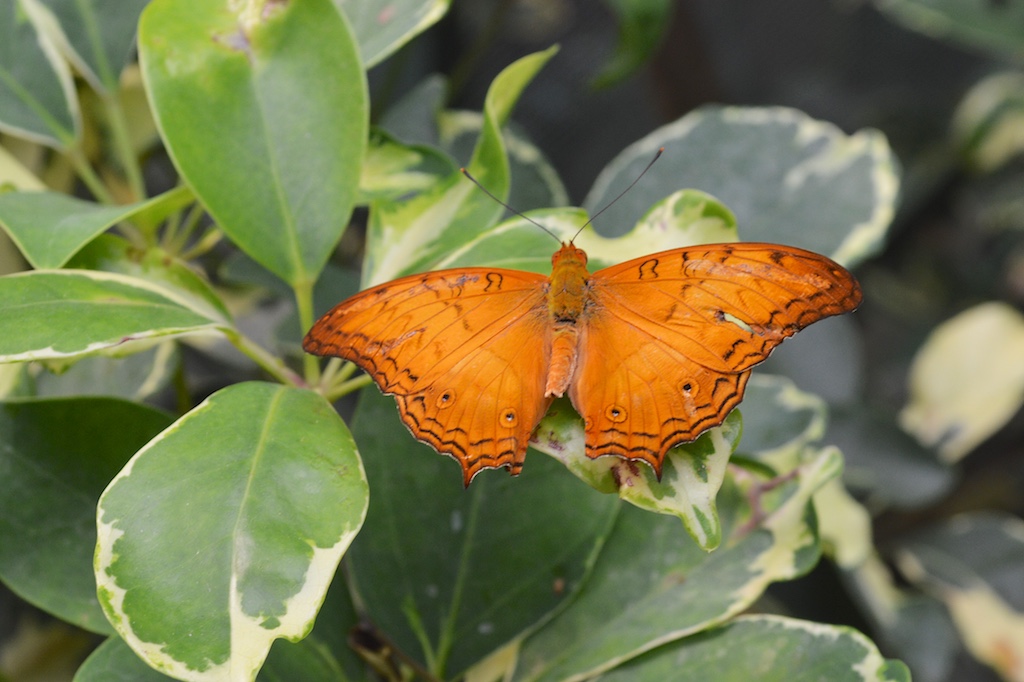 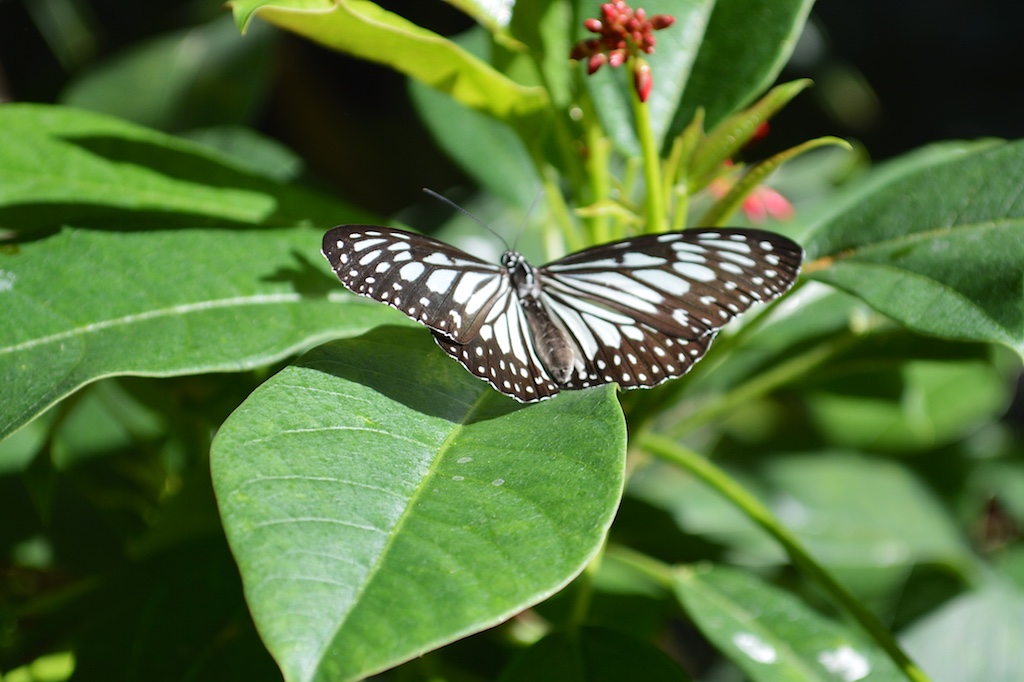 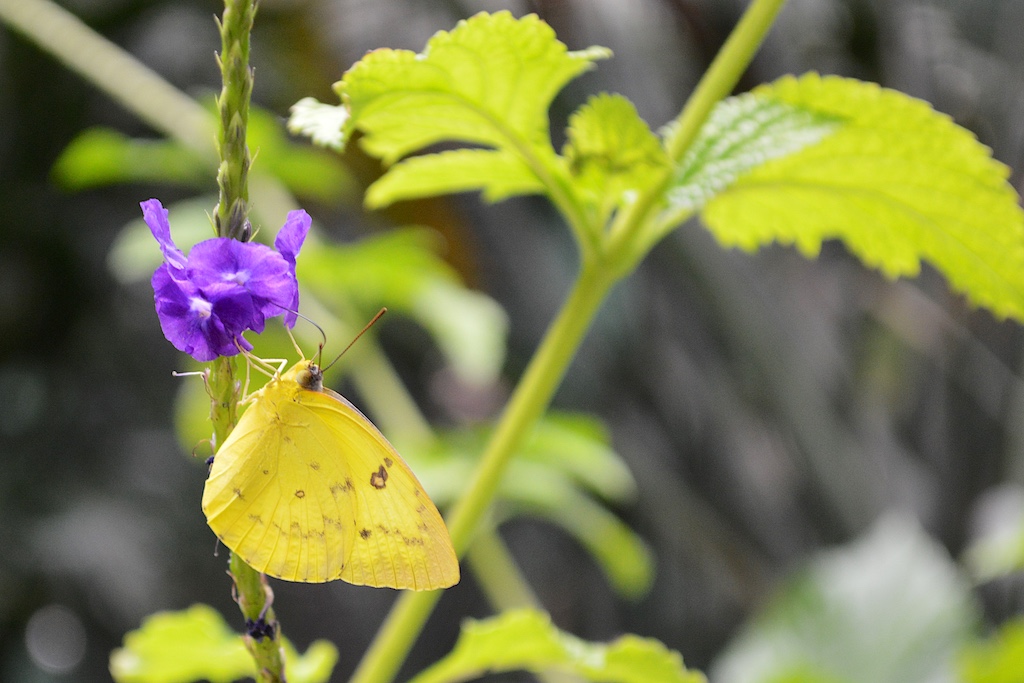 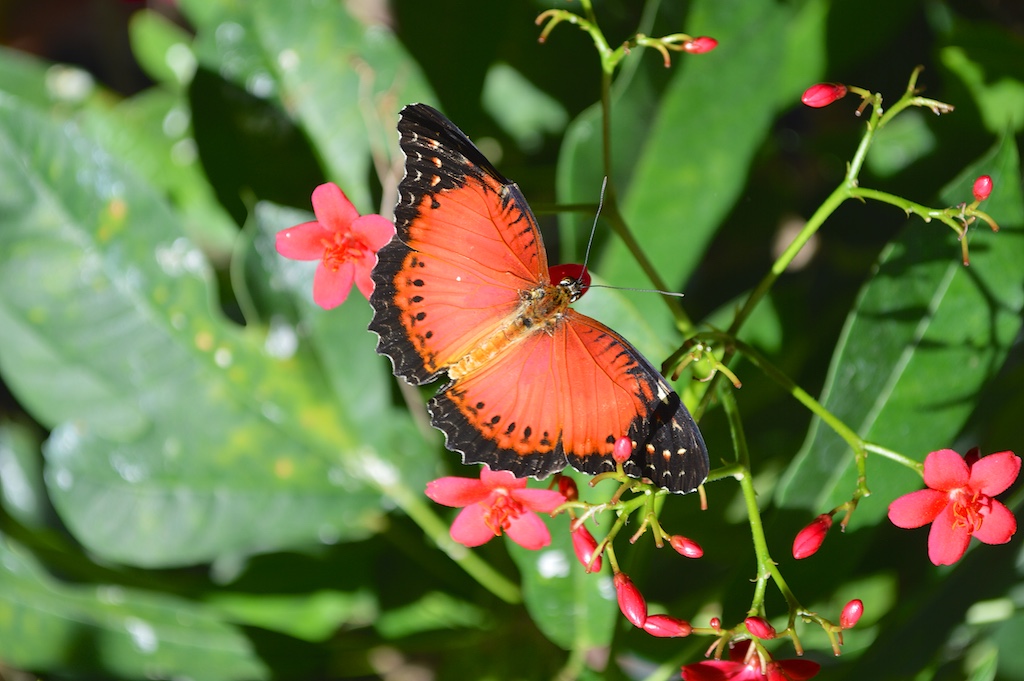 And now for my favorite butterfly we saw during our visit. It turned out to be the only one we would see the entire hour we stayed in the exhibit. My eagle-eye daughter actually spotted it.

What? A moth in a butterfly exhibit? Heresy. I spotted this guy above the exit door. It is some type of Luna Moth (Argema sp.). Why are there so few moths in the exhibit, you ask? Because almost all moths, like this Luna Moth, are nocturnal. Bet you didn’t know that. 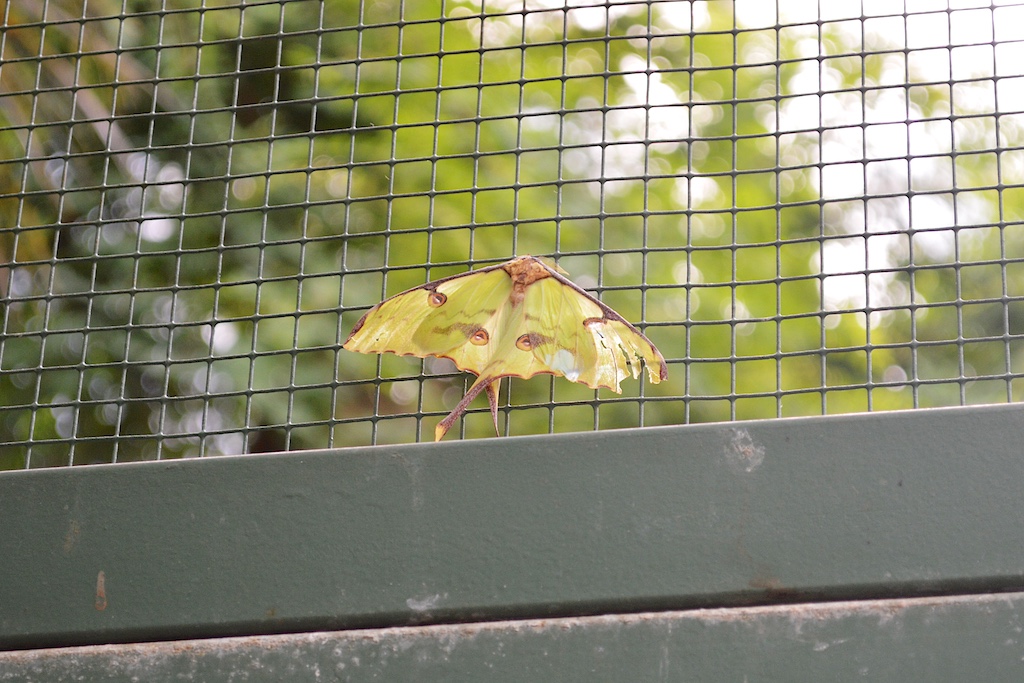 That’s all the different butterflies that I was able to take photos of today. By my count, my daughter and I were able to see 18-21 of the close to 40 species once in the exhibit. Some of the species had already run through their lifecycle and were no longer represented by the time we chose to visit. So who really knows how many species were present that day. And in case you were wondering, the average lifespan for a butterfly is two weeks. Some might only live a few days. This is of course one of the reasons the exhibit is only a short, seasonal thing.