Earlier today I drove up to Costa Mesa to finally visit the Southern California Spring Garden Show “At Home in The Garden.” I have heard mixed reviews over the years about the show with some years being great and others a waste of time. The biggest complaint I hear from people now is that the larger providers basically pushed the littler guys out. To a plant collector like me, it is those little, backyard growers that tend to have the cool stuff. Having some free time today, and after reviewing the participants list, I figured I’d give the 1-hour drive a go.

The Southern California Spring Garden Show is held at the three-leveled South Coast Plaza. Booths are crammed right against the banisters, which did lead to some traffic jams. However, it didn’t feel claustrophobic like some plant shows I have been to. 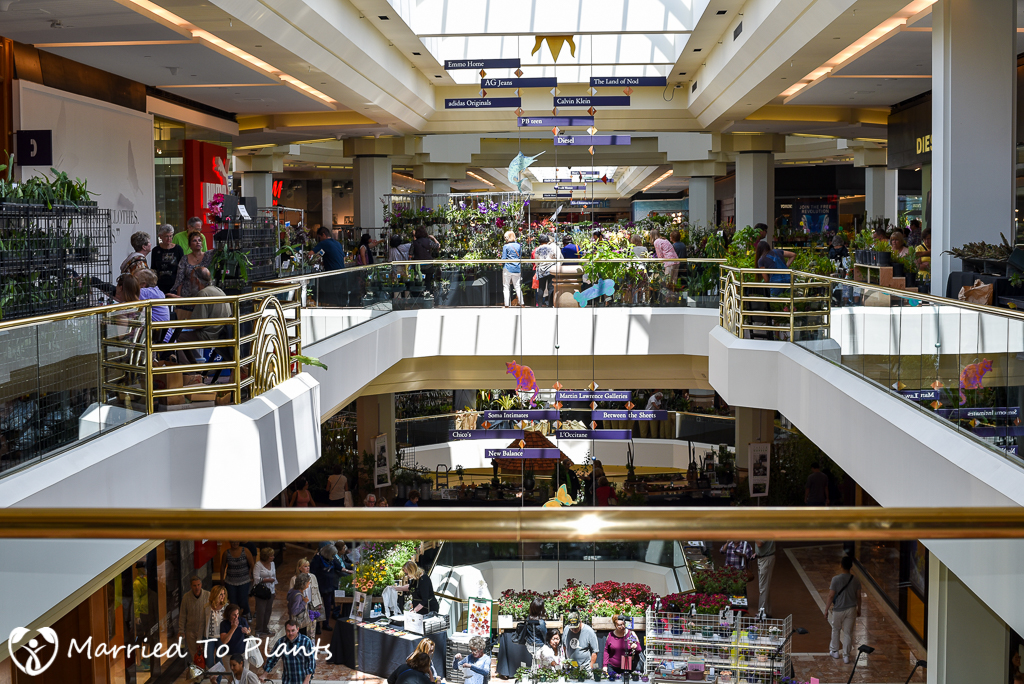 The first thing I noticed while walking around is that the largest plant representation was from the orchids. There were quite a few orchid suppliers showcasing some amazing plants. All these orchids being shown indoors brought back memories of some of the flower shows I saw while in Thailand. 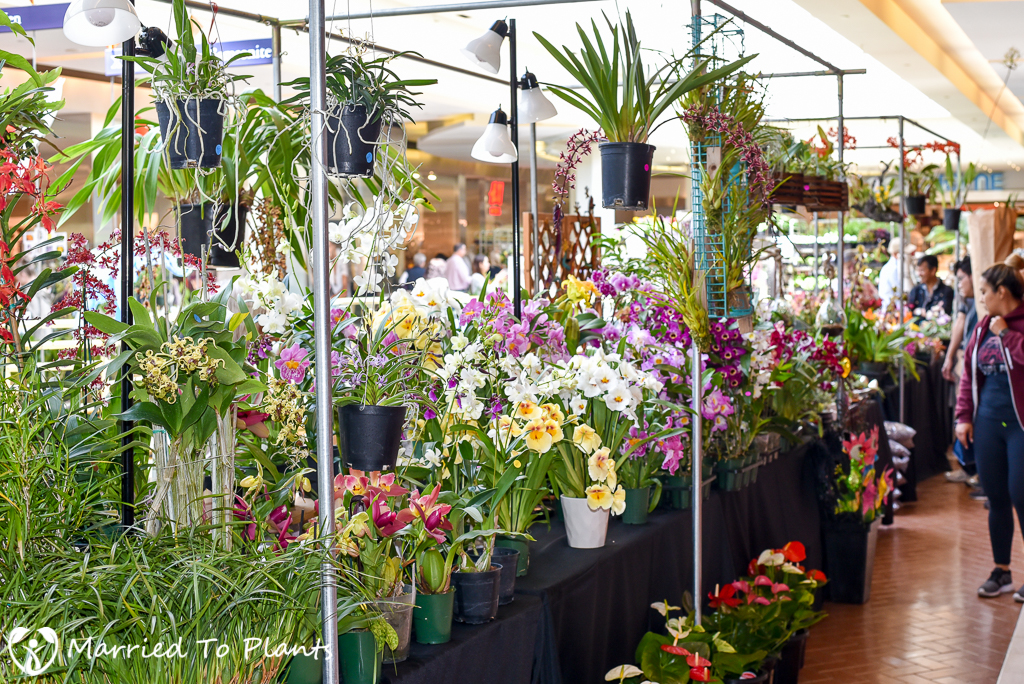 It seems as though I was not alone in my admiration of all the orchids. 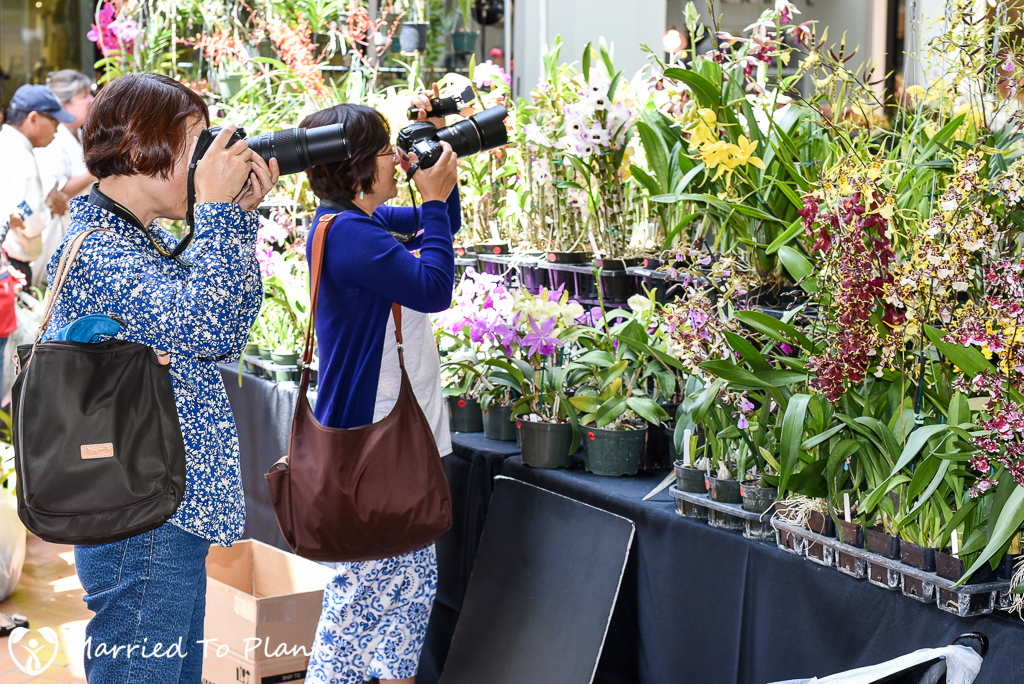 It was nice to see that Andy’s Orchids had a booth. Andy’s Orchids is located about 20 minutes from my garden and they offer a lot of orchids that can be grown outside. I am not an indoor orchid guy and most of the orchids at the show were just that. 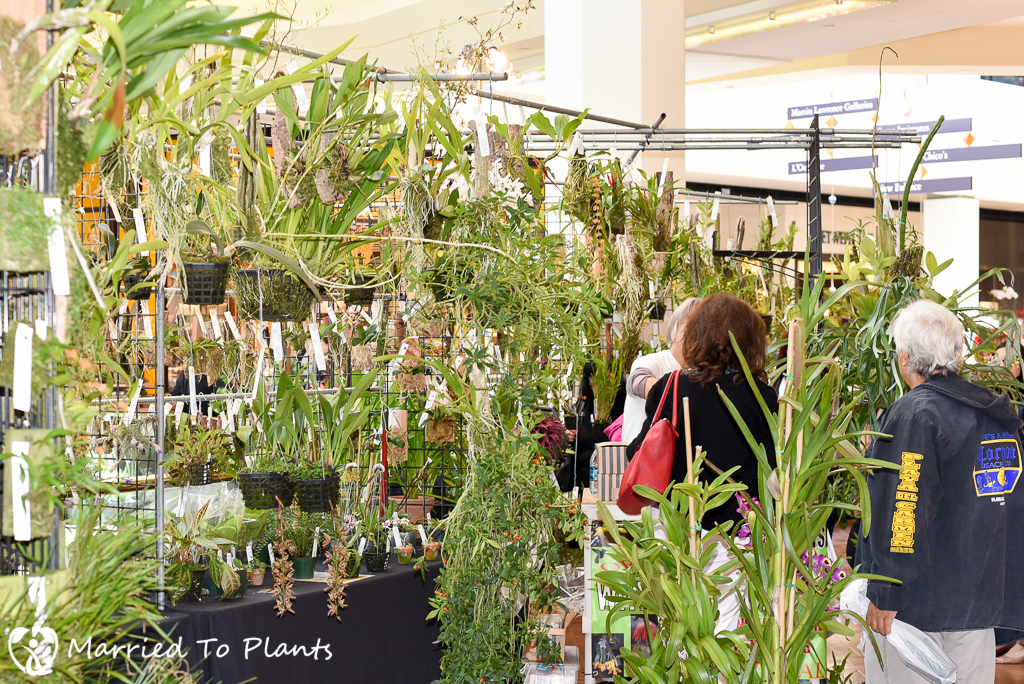 An orchid company I had not heard of before had some of the coolest orchids at the show. Seed Engei is run by a Japanese family with a speciality in Neofinetia falcata. Neofinetia has been cultivated since the days of the samurai in Japan. 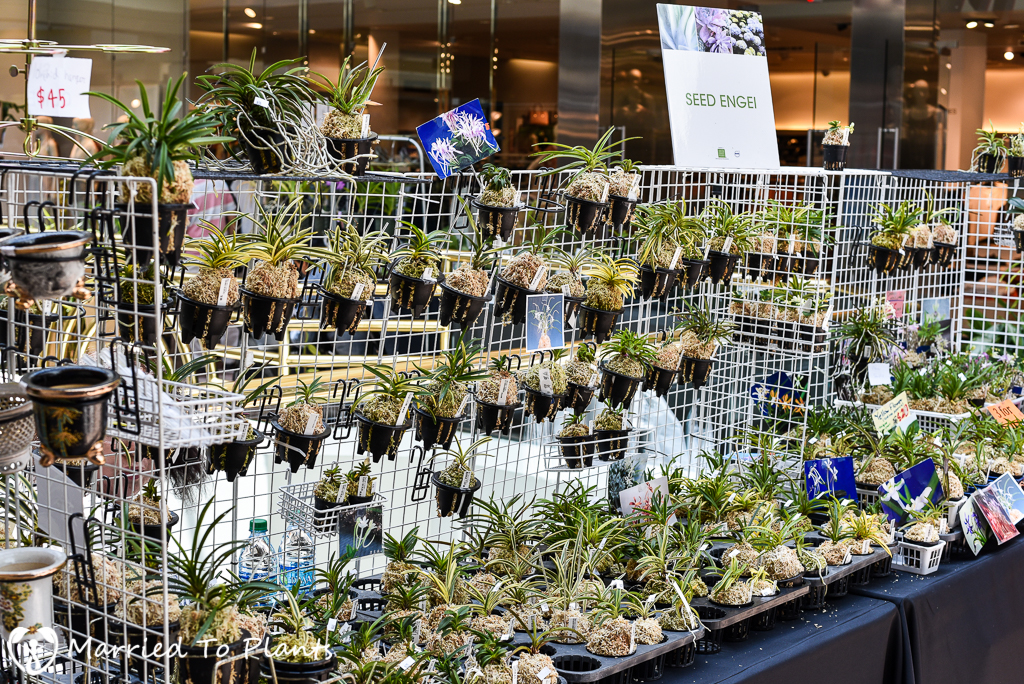 Their selection of variegated Neofinetia was simply incredible. And yes, that does say $350!

Keeping with the tropical theme, Live Art Plants was showcasing a collection of beautiful bromeliads, most of which could be grown outside in the garden. 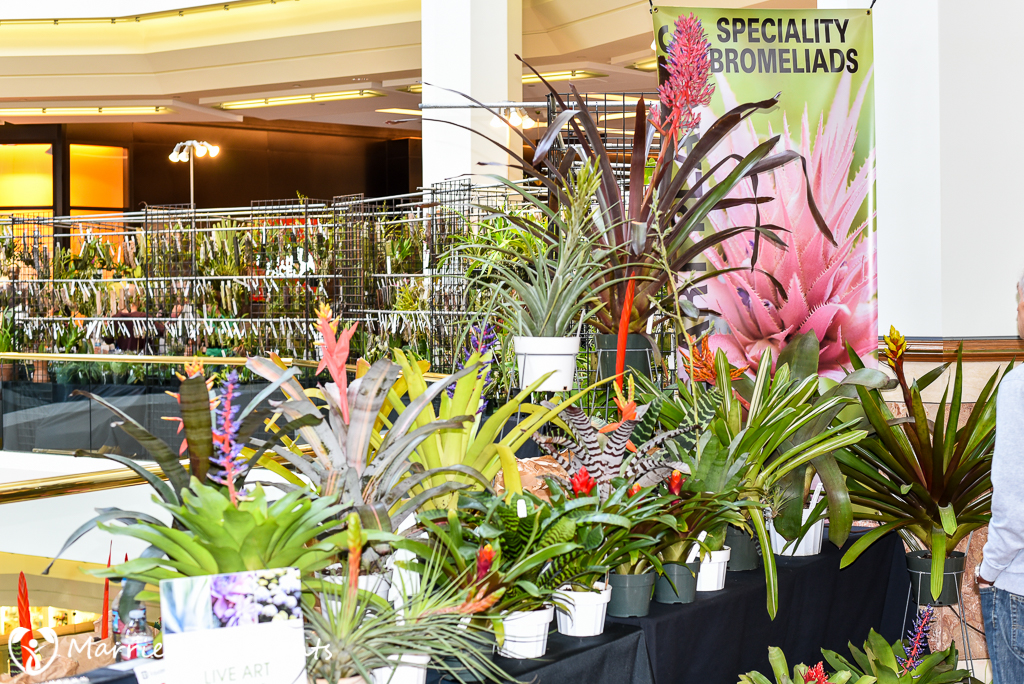 Ten years ago if you went to a garden or plant show, xeric plants were not something you would see too often. Aside from the orchid booths, the theme of the show was water-wise plants. The Orange County Chapter of the California Native Plant Society was there representing. I forget the guy’s name in the photo below, but he was likely the most helpful and one of the more knowledgable plant people I had the pleasure to talk to. This proud Californian loved his native pants.

Back to Natives Restoration is a nursery that promotes the use of locally native plants but also designs, installs and maintains locally native landscapes for homeowners and businesses. 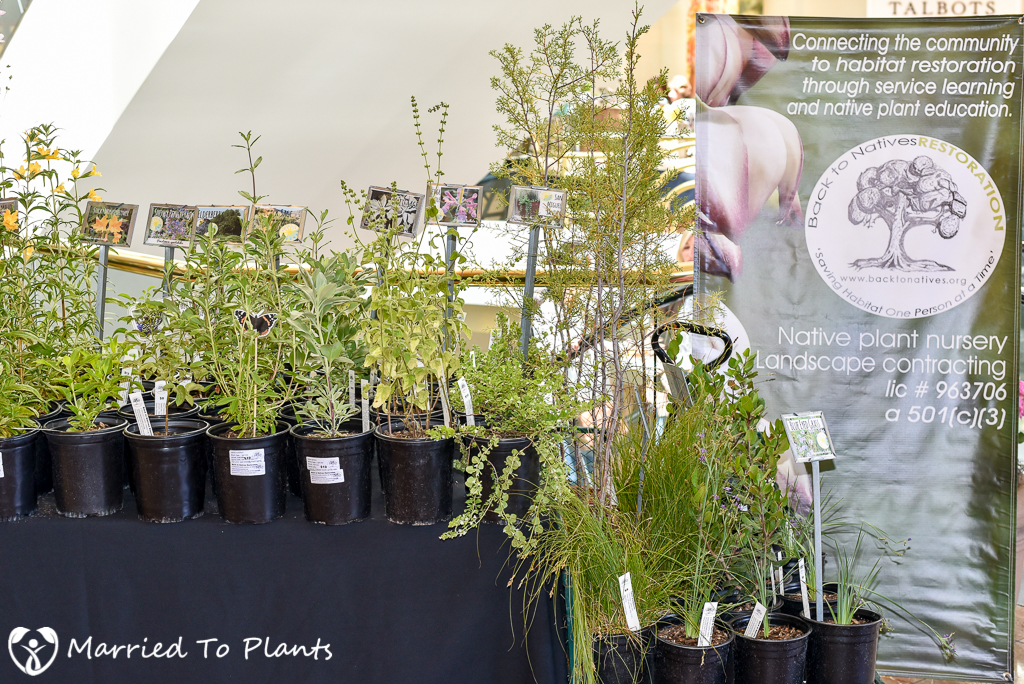 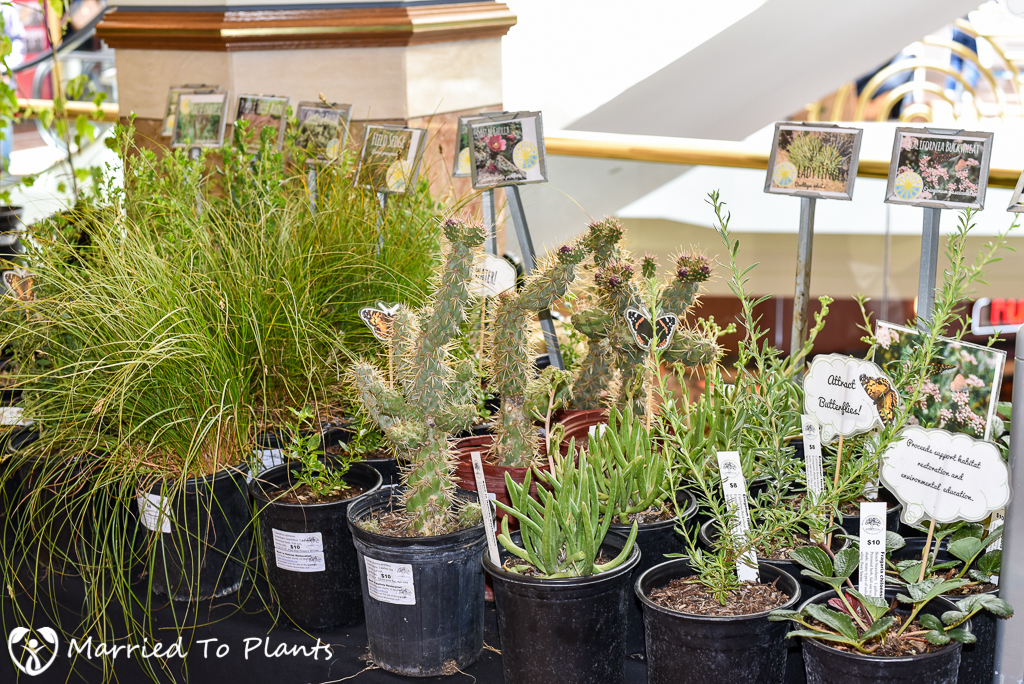 Ricardo’s Nursery has a great American dream behind it. Mexican immigrant Ricardo Arrivillaga started working as a driver for a nursery when he first moved here in 1993 and now owns an award-winning, 9-acre Long Beach nursery that focuses on water-wise plants. 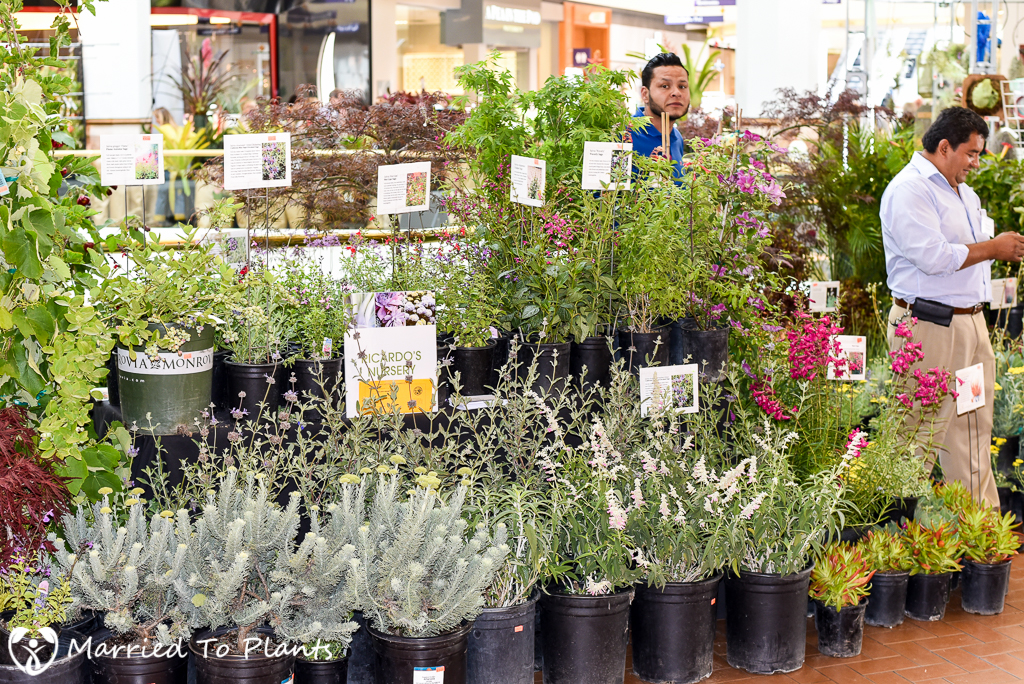 If someone was in need of some inexpensive succulents, there were plenty of choices at the show. 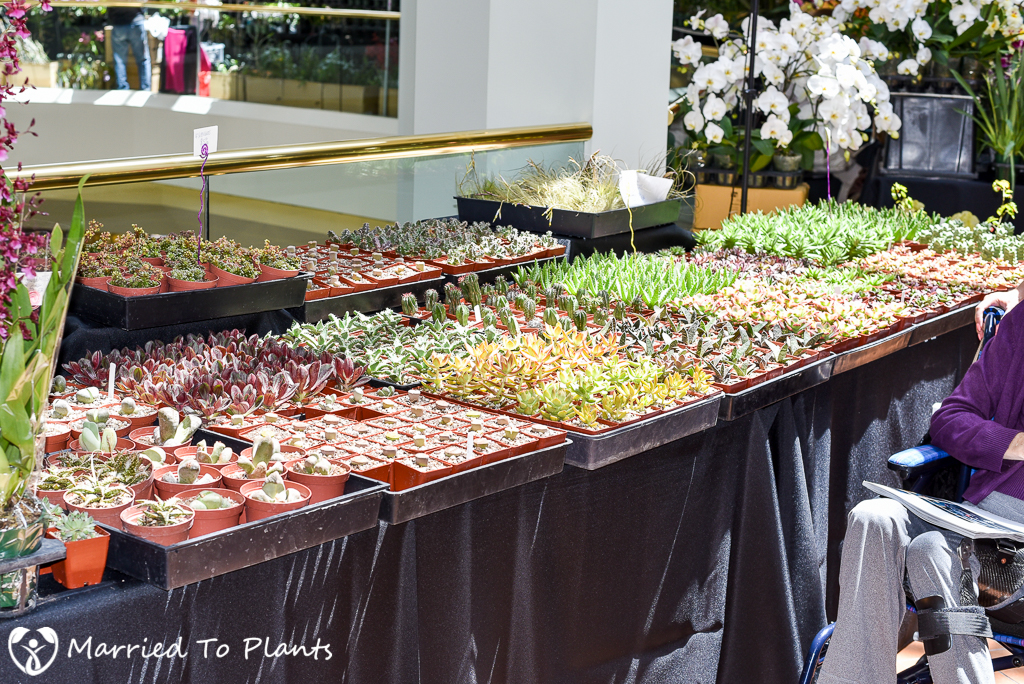 The $2 succulent racks was a very popular location. This was the quietest I saw it the entire time I was there. 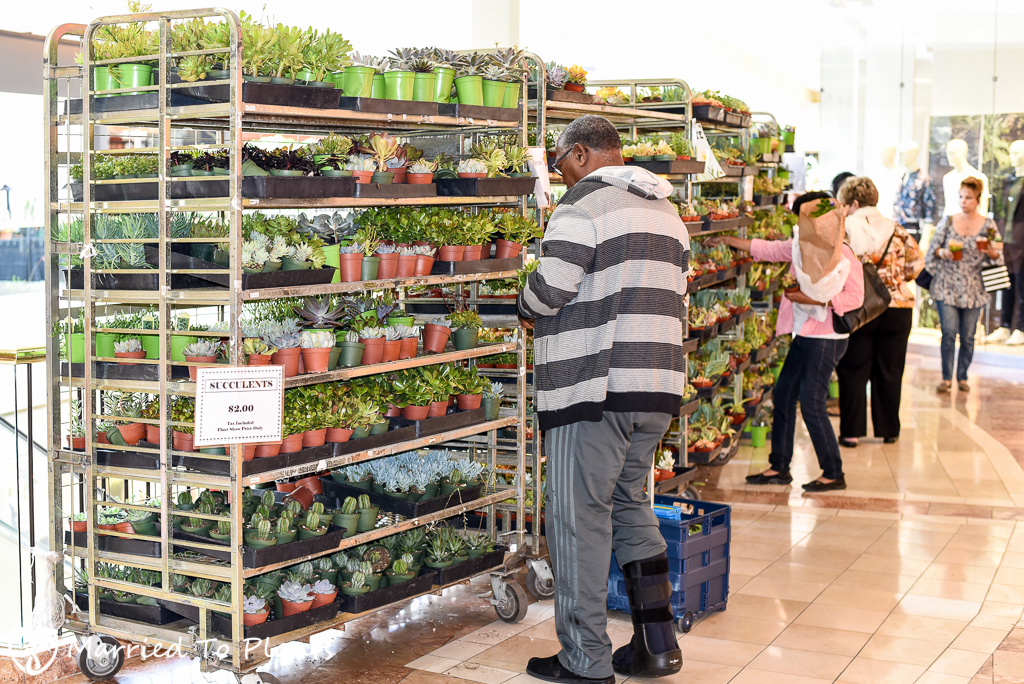 One of the complaints I heard about the Southern California Spring Garden Show that I mentioned earlier was that there were not many smaller growers participating anymore. So I was happy to see Rain Shadow Designs present—although they were stuck in the back on the third floor. Matt Maggio, the owner, is an outstanding grower of the less readily available succulents. If you wanted to find something unique to add to your garden, Matt’s booth was it. I have purchased his plants before through other people but never had the opportunity to meet him in person until today.

My purchases from Matt were stacking up quickly. I still had to get all this back to the car along with everything else I bought. It took me three trips.

Proteas have a devote following of collectors that plant them in their garden or use them as cut flowers. Even though End of the Rainbow Protea had a great selection, I didn’t purchase any. I still have a Protea-free garden.

While I am not much of an indoor plant guy, I couldn’t help but appreciate all the African Violets on display from Violet Perfection. 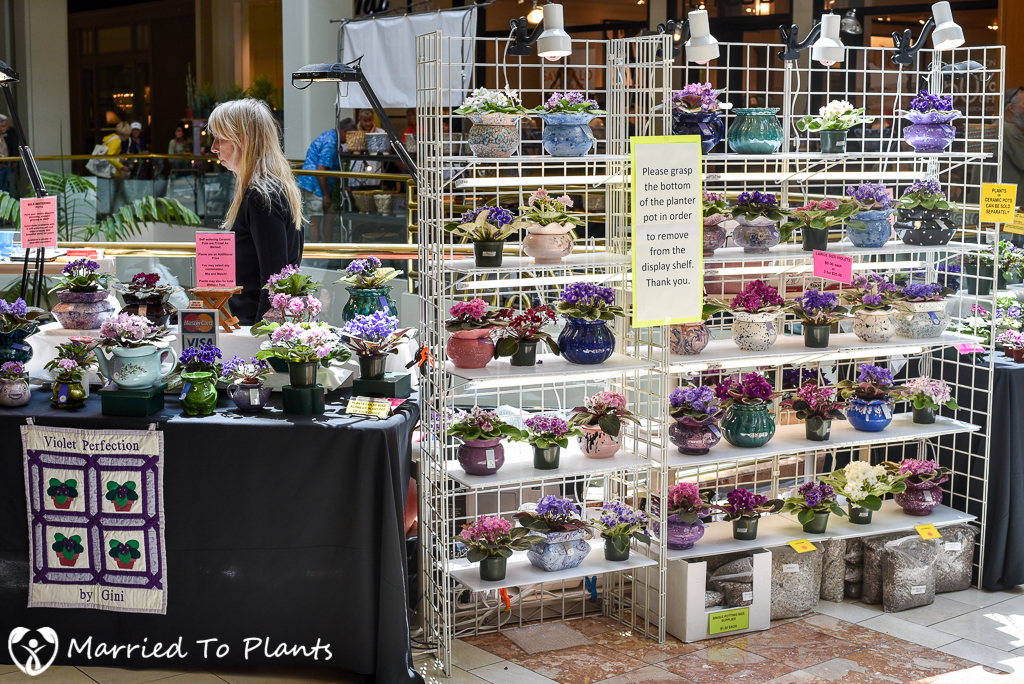 The Orange County Rose Society was offering up a few plants. Not a rose guy either. How many people have I offended so far?

The Southern California Spring Garden Show offers a great opportunity to pick up some low-cost plant cuttings. You could buy Plumeria cuttings from Myuhka’s Plumerias, Epiphyllum cuttings from the Epiphyllum Society of America, Tillandsia cuttings from Rainforest Flora, and even Daylilies from Greenwood Daylily Gardens. 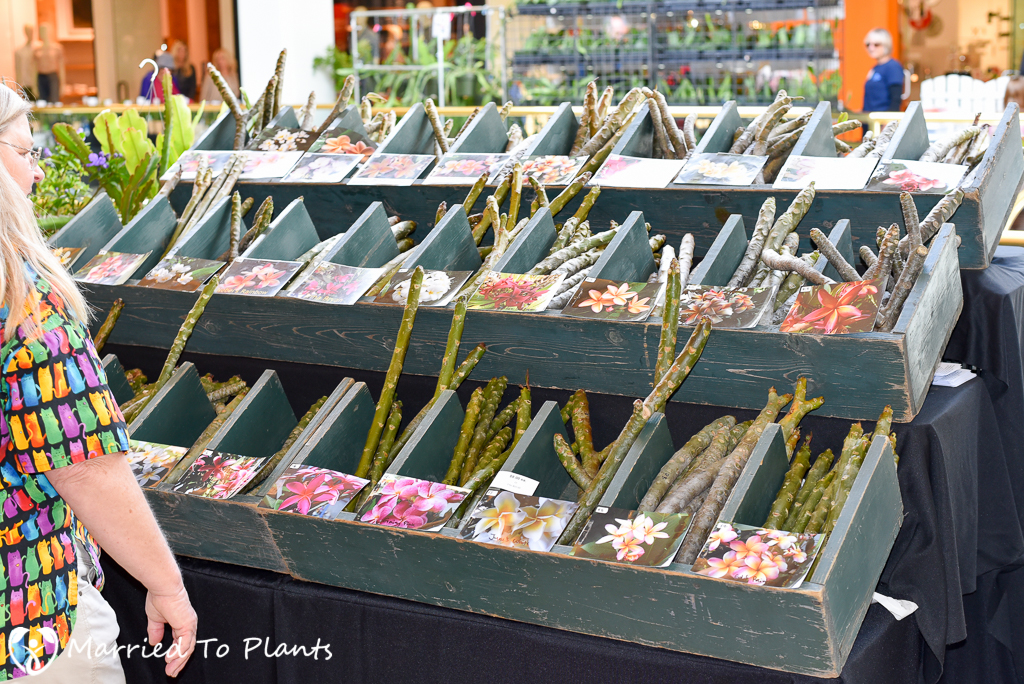 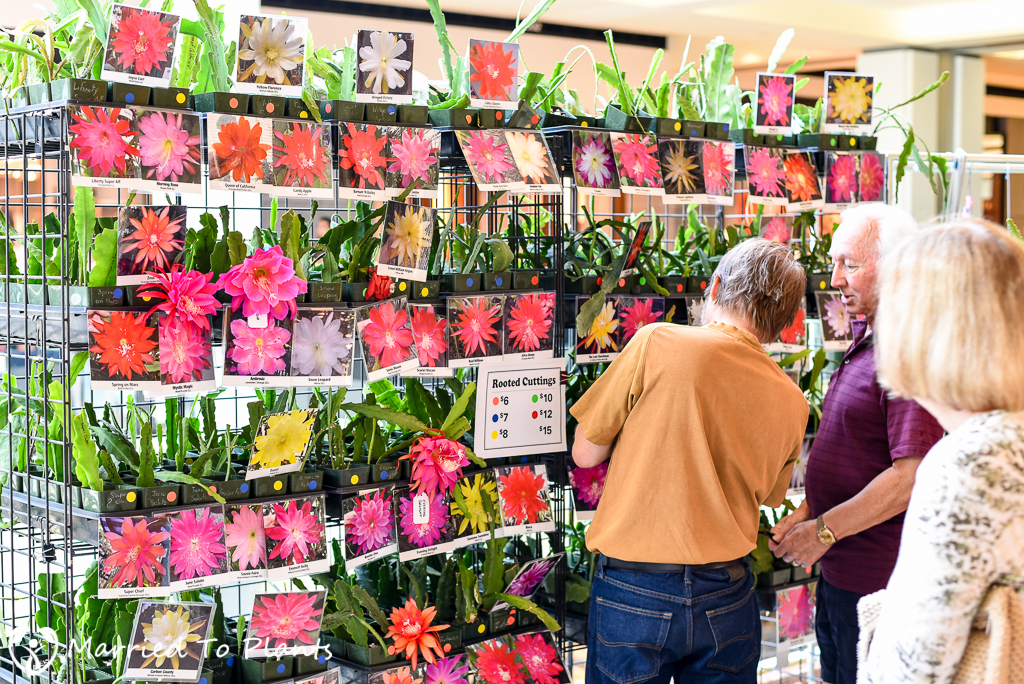 While I am partial to my Felco’s, the Wildflower Seed and Tool Company looked to have some quality tools available. I found the “Women’s Tools” section but never did find the “Men’s.” 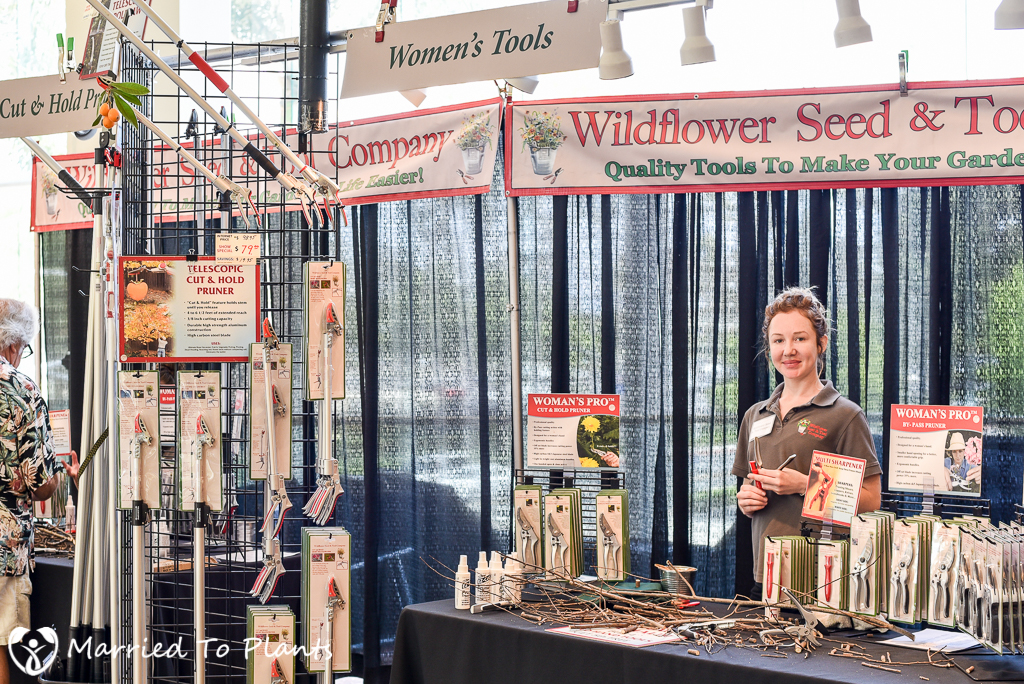 Muradian Pottery had an amazing display of Mark’s masterpieces. This was a very popular booth so I made sure to put aside the pots I wanted so no one else would grab them. Once I came back a few hours later I realized I was lucky I did put them aside because many of the pots he had on display were gone. 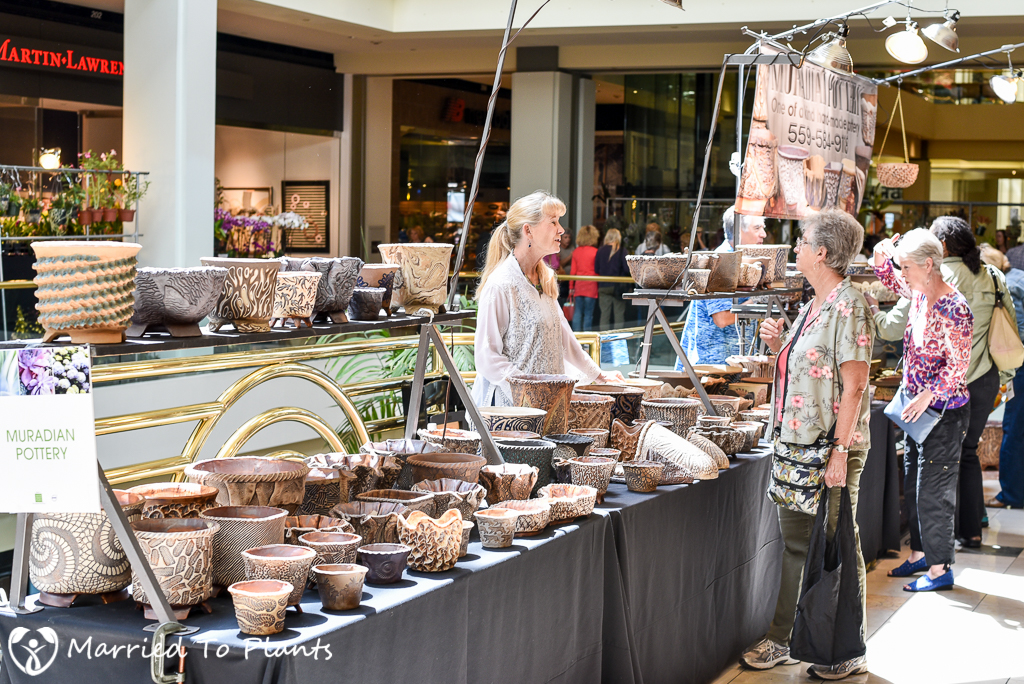 A few booths at the Southern California Spring Garden Show were dedicated to offering table-ready arrangements. A lot of work went into these designs and some were quite detailed. The first one shown below is from Tina’s Garden, the second from Table 2 Garden, third from GARDEN-ette, and the fourth and fifth I can’t recall who designed them. 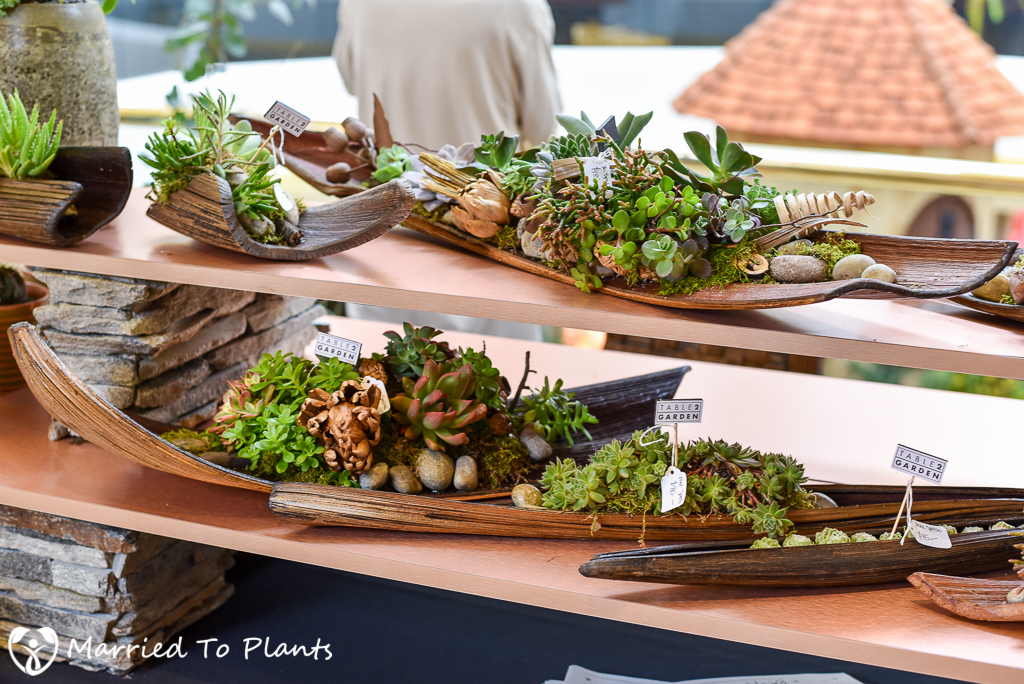 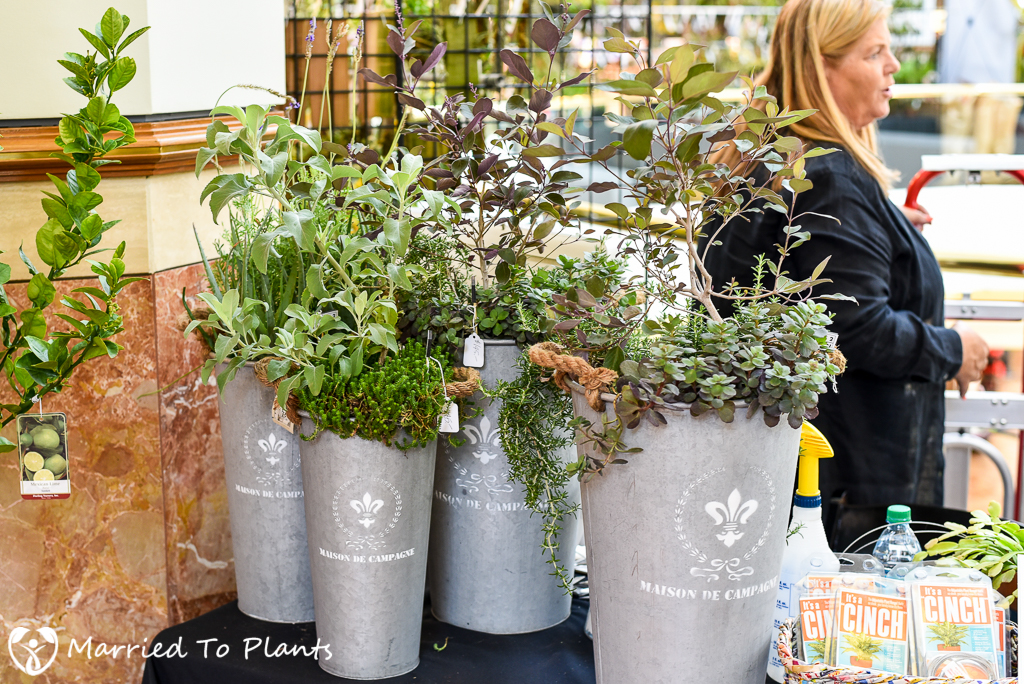 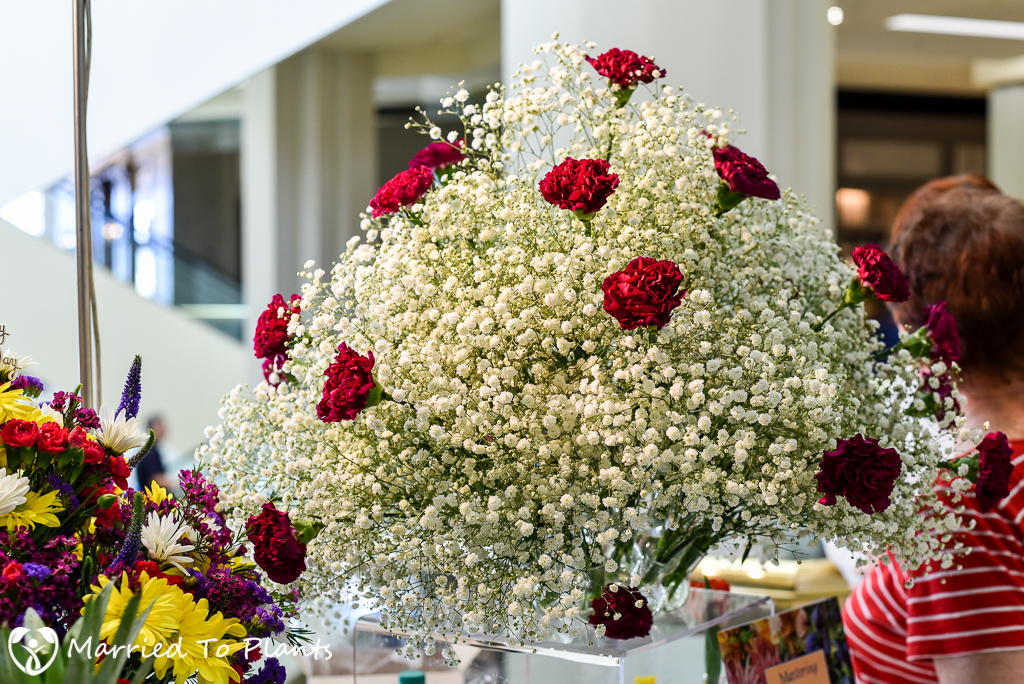 Bonsai is living art. The displays the Orange Empire Bonsai Society was showcasing proves this.

This Juniper was just amazing. Mr. Miyagi would have been proud.

To me the most impressive thing I saw at the Southern California Spring Garden Show was this bonsai Bougainvillea. I stood and admired this plant for a good 10 minutes. 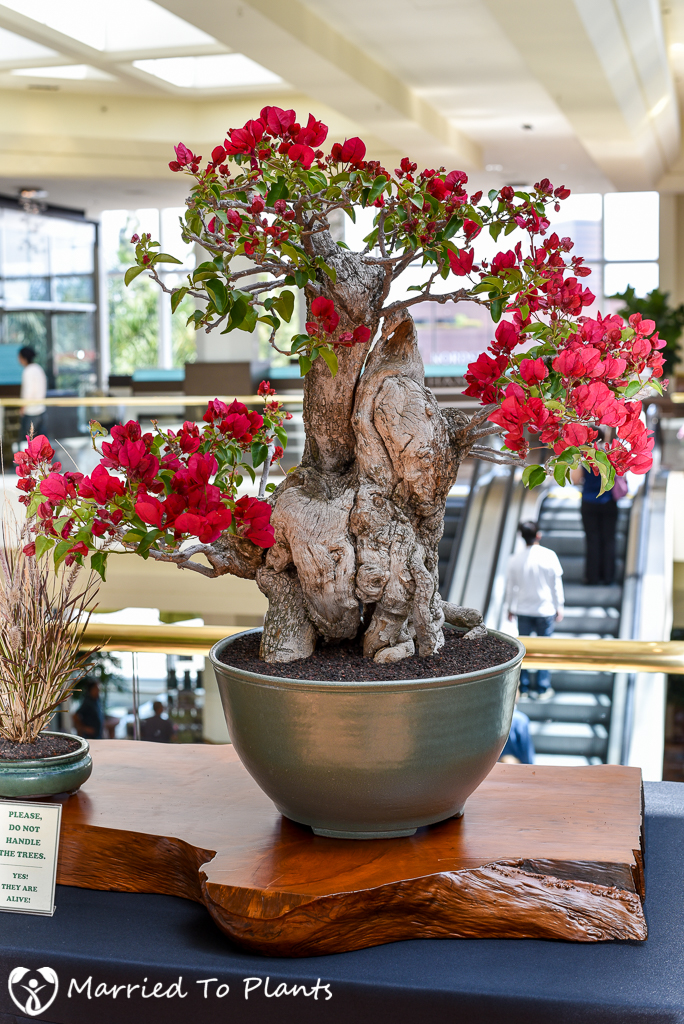 A few nice garden displays. The first even had a few chickens. 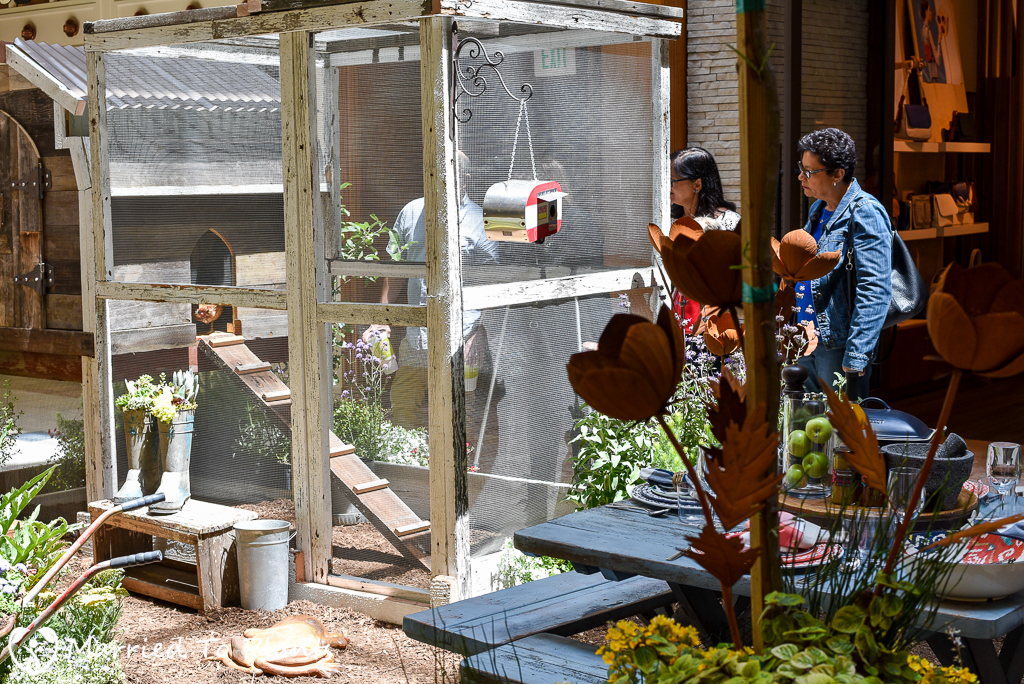 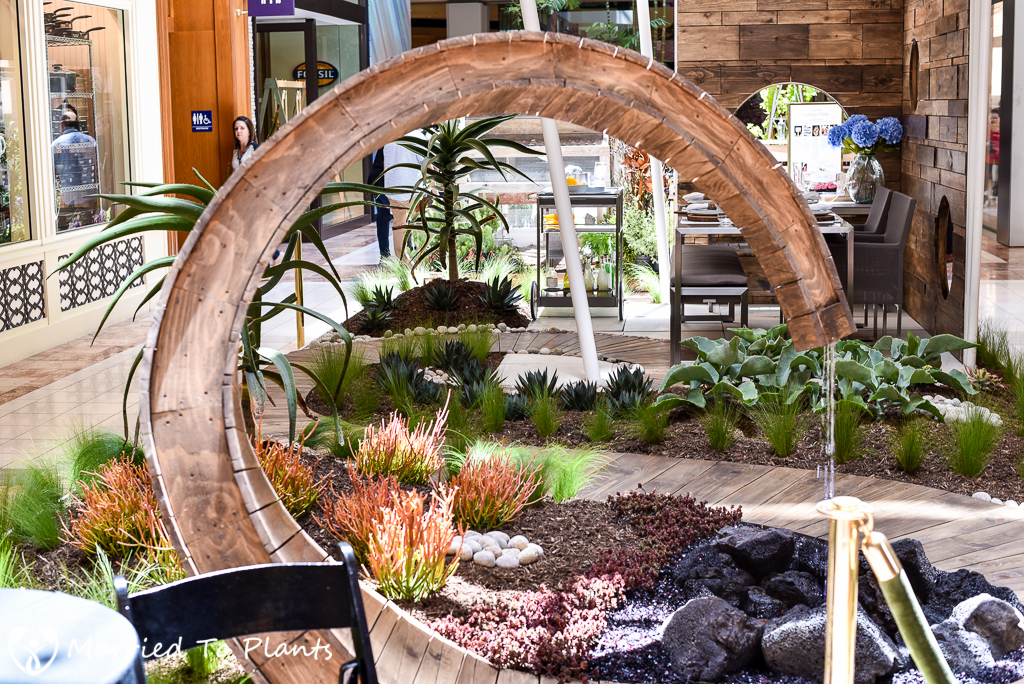 OK, so what did I buy at the Southern California Spring Garden Show? I like to post what I take home from the various shows because inevitably I get asked anyway. First up, two marvelous Muradian pots.

These cool-tolerant orchids that I can mount to trees in my garden came from Cal-Orchid. 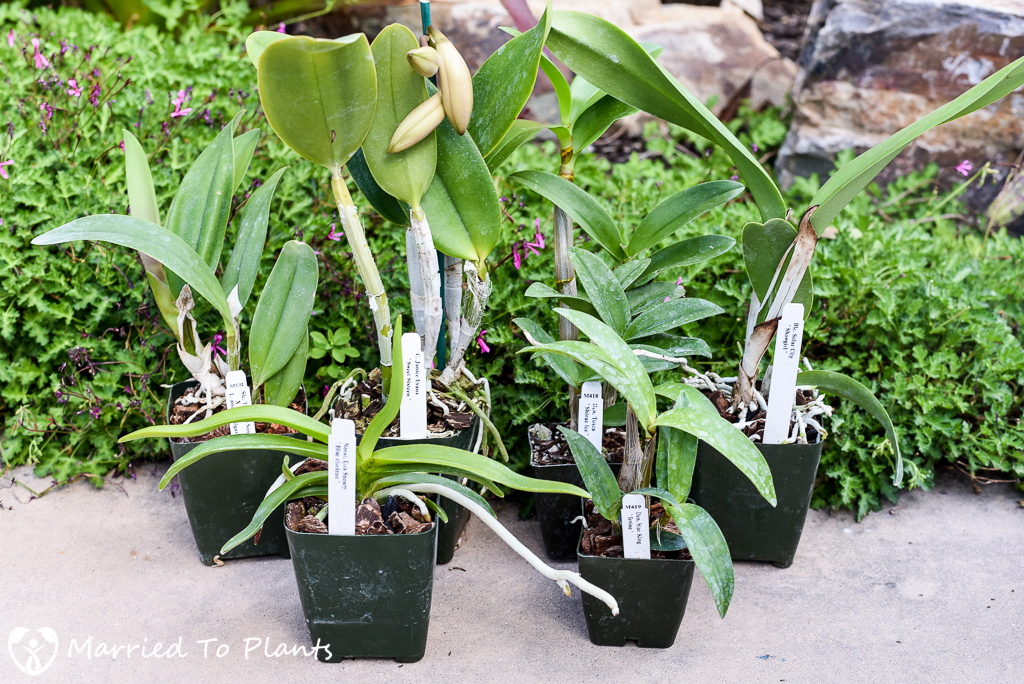 The rest of my loot came from Matt Maggio with Rain Shadow Designs. A nice Echeveria agavoides x colorata hybrid on the left and an Echeveria lutea on the right. 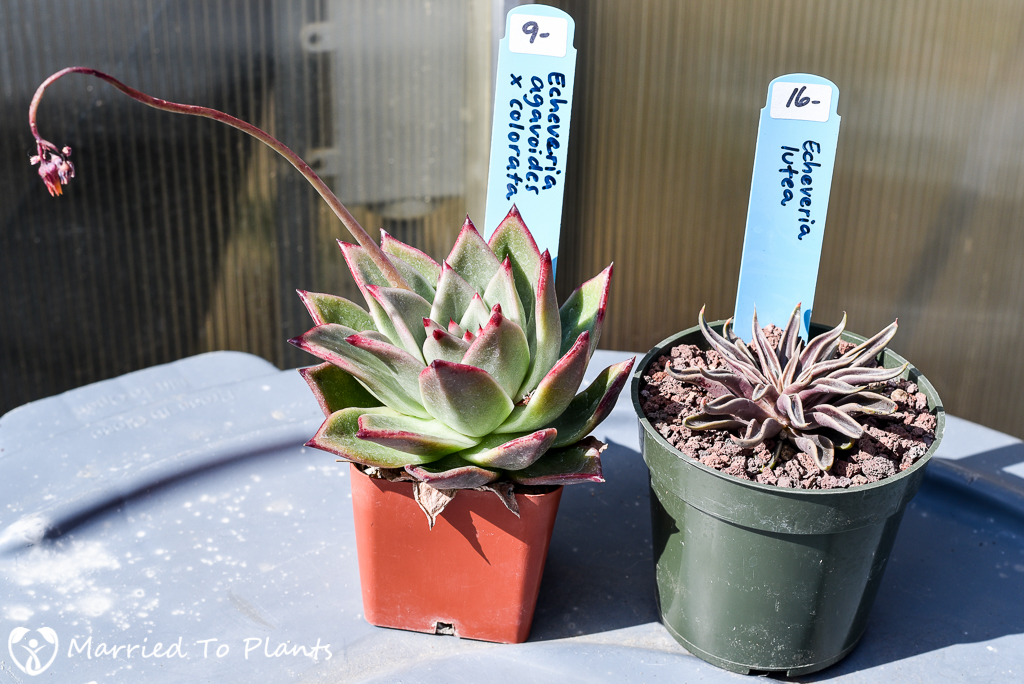 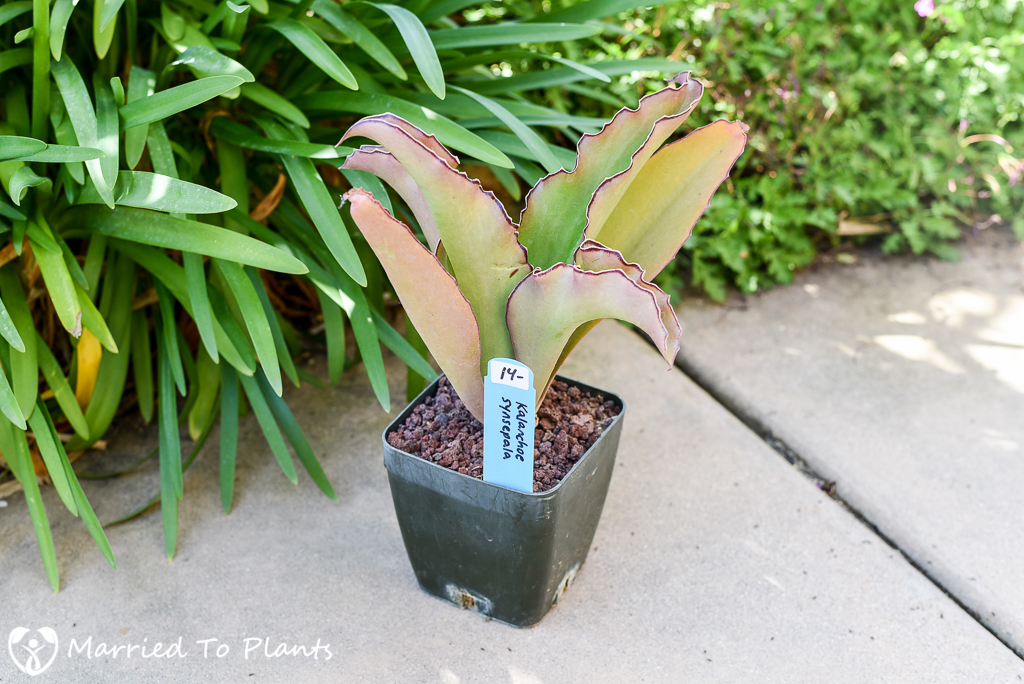 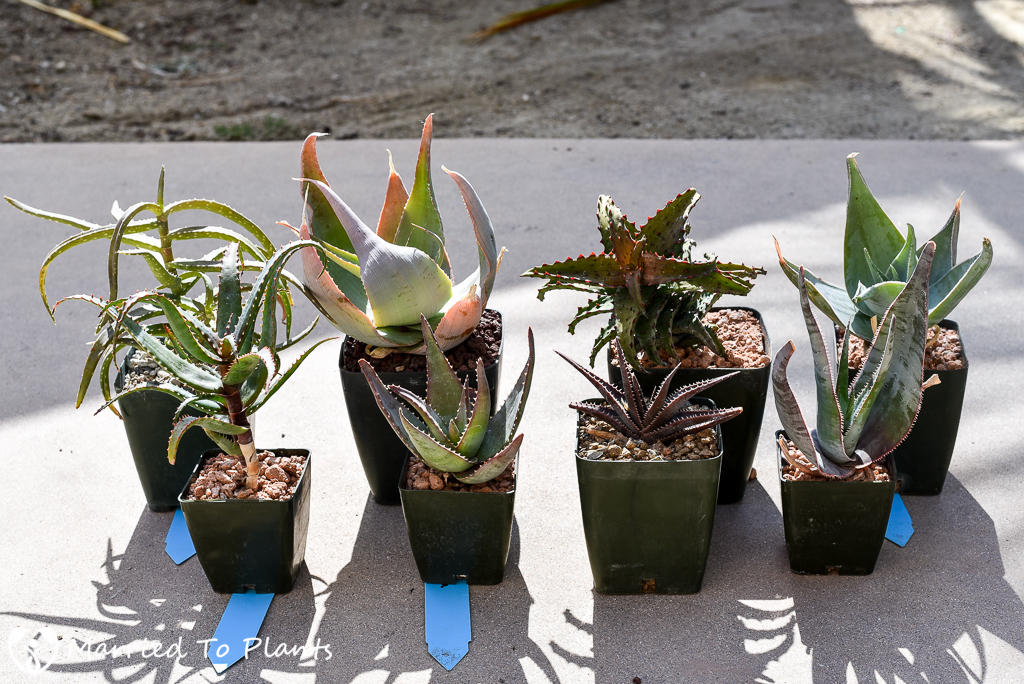 All in all it was a great experience and I am glad I made the drive. However, if they do not get more of the smaller guys participating I doubt I would go back. There are far too many other shows throughout the year in Southern California with more to offer a plant guy like me.