Every so often a palm tree makes its way into cultivation and becomes the desire of all collectors. Sometimes this desire puts pressure on wild populations, like what happened with the Foxtail Palm (Wodyetia bifurcata). Poachers eventually led to Australia banning seed export of Wodyetia bifurcata. Luckily the palms grew pretty fast in cultivation and set copious amounts of seed to the point where a palm that would once have sold for a few thousand dollars in the ’80s can now be bought for $25 at Home Depot.

One of the more recent palms to create a fervor for collectors came about from photos posted online showing a palm growing at a once obscure lodge in Madagascar. In 2006, French guide Bruno Leroy posted photos on PalmTalk of a beautiful tree growing at the Vakona Forest Lodge located in Mantadia National Park. This clumping palm was highlighted by the dark-colored stems and petioles, contrasted with a white crownshaft. The palm quickly acquired the moniker Dypsis ‘Black Stem,’ for at that point no one knew if it was a form of an already described species or something entirely new. From 2006 to today, Dypsis ‘Black Stem’ has been a highly desirable palm and is still quite rare. Demand can not be met.

Last year I had the opportunity to see the original Dypsis ‘Black Stem’ that started this craze, as I stayed at the Vakona Forest Lodge in Andasibe. While most ardent collectors are well educated on this palm, I figured I would share its story and beauty with more people.

Back in 2006 there were only two Dypsis ‘Black Stem’ planted at the lodge. One adult and a juvenile. These plants were dug out of the rainforest close to the lodge and transplanted into the garden just like many of the plants found at the Vakona Forest Lodge were. During my visit I counted six in the garden, so the lodge has been transplanting more over the years. 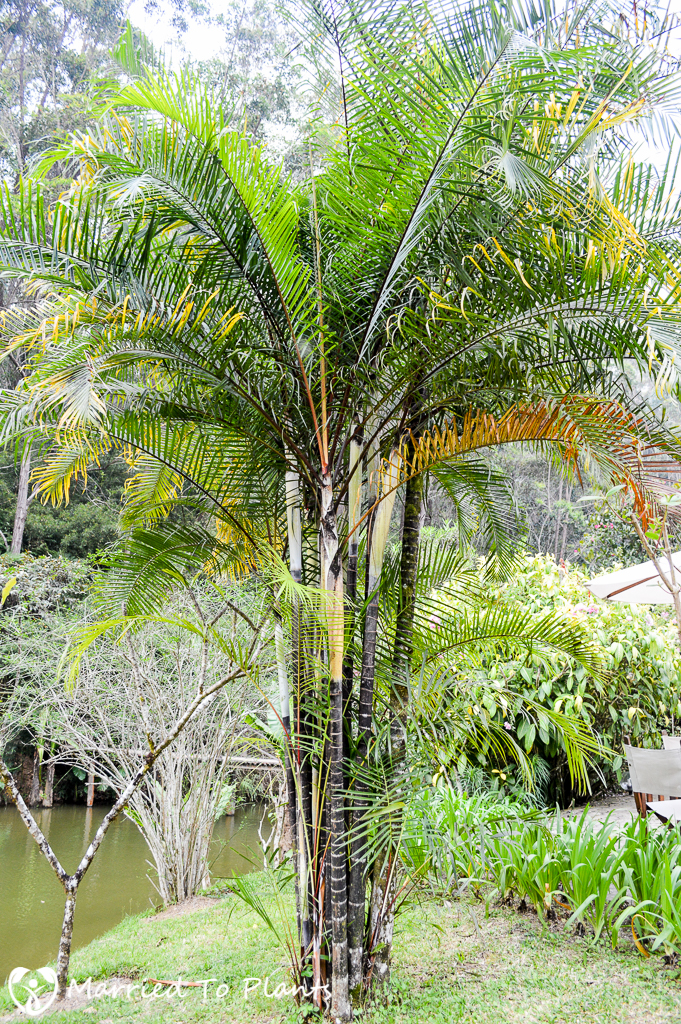 Here is the original Dypsis ‘Black Stem’ that was posted back in 2006 that is found along the lake at the lodge. I would end up having quite a few Three Horse beers in those chairs just staring at this palm. 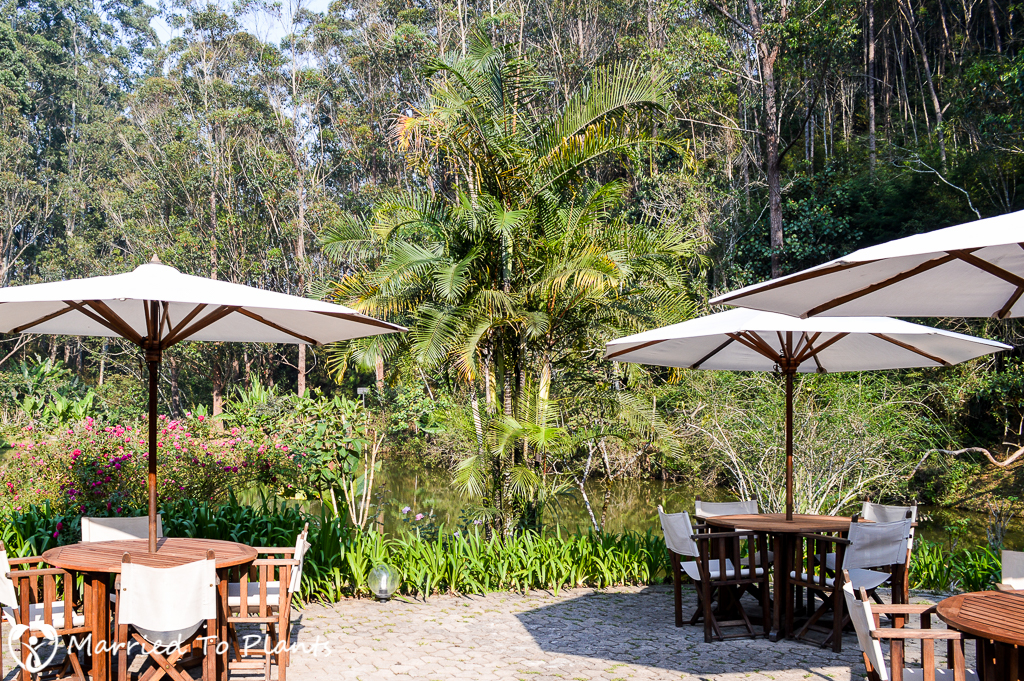 So why all the enthusiasm for this palm? First, let’s go right to the trait that stands out the most on Dypsis ‘Black Stem’ – its black stems, of course. There are not many palm trees that have a true black stem. So when a Dypsis was found with this trait, it was bound to create a stir. 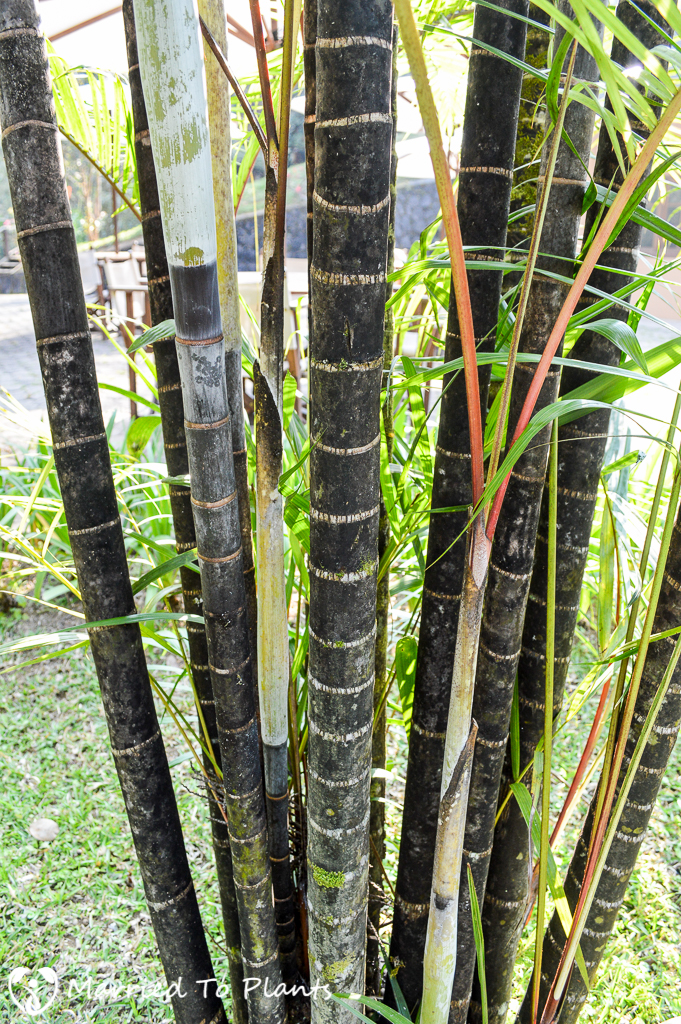 While a few other palm trees can have the look of black stems thanks to a mold that can grow on them, Dypsis ‘Black Stem’ has a true dark-colored stem that can be seen once a leaf base is removed. 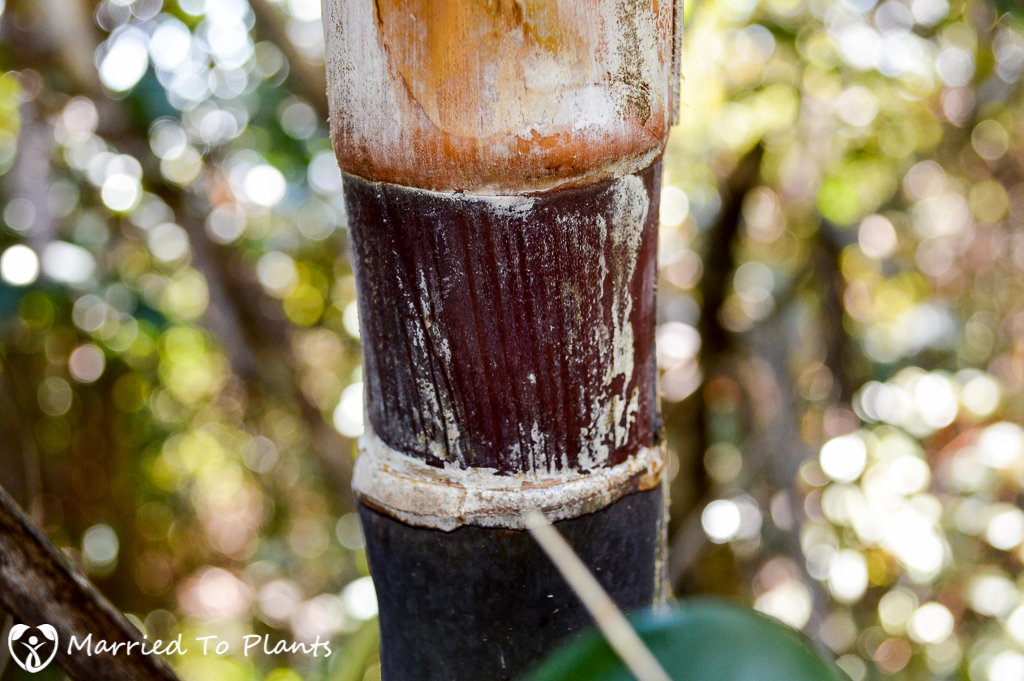 The second attractive coloration trait is the white crownshaft that has dark petioles. The light and dark contrast perfectly. Some specimens I saw in the wild had yellow crownshafts with those dark petioles. 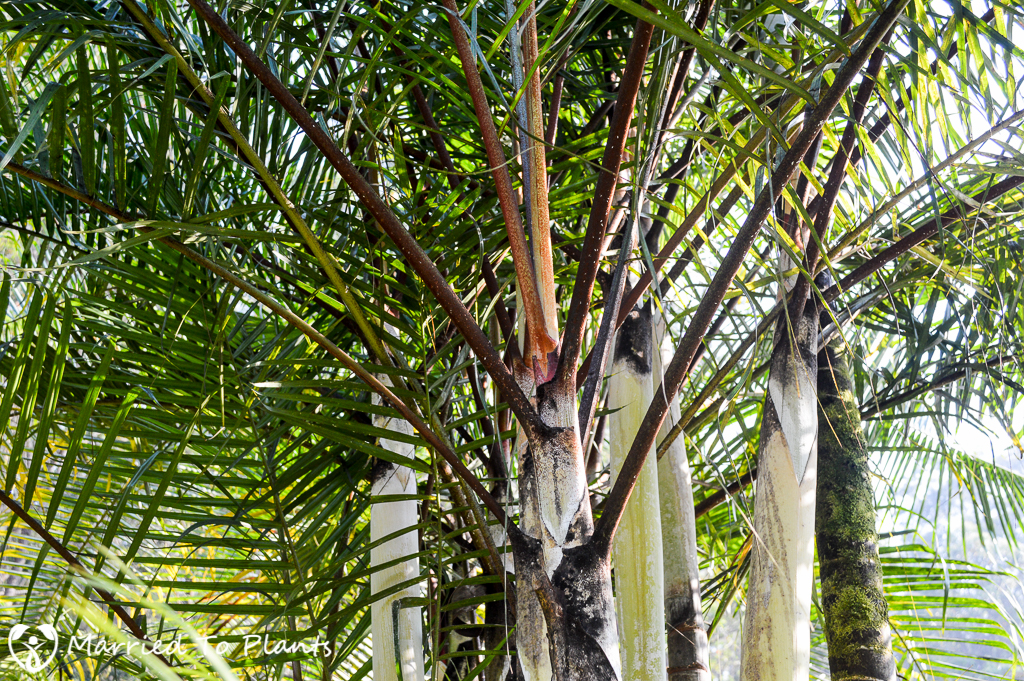 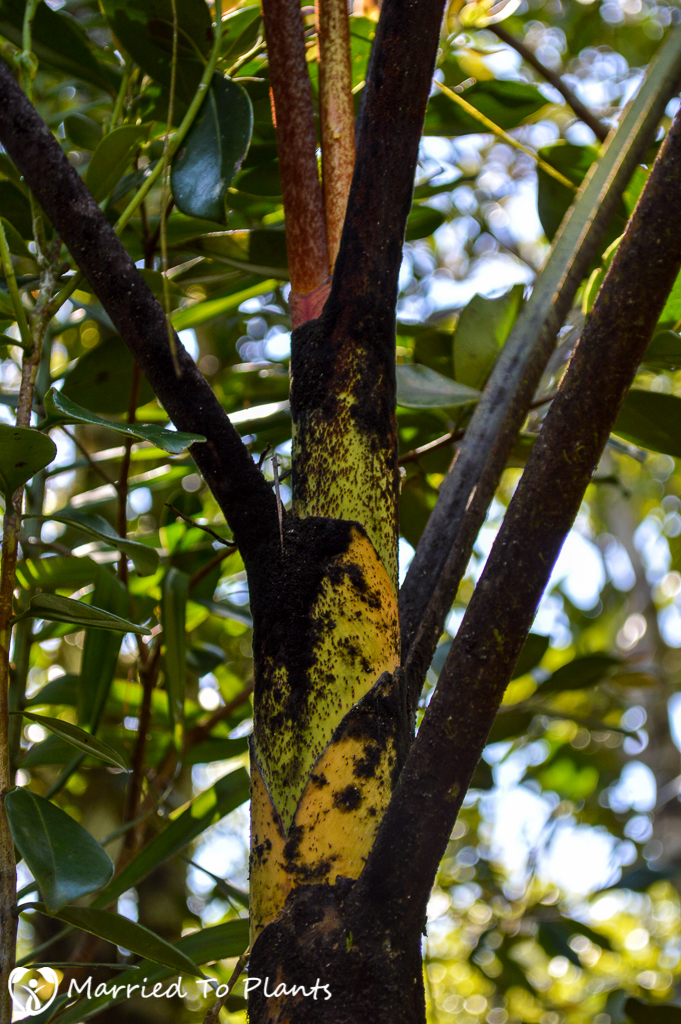 In juvenile plants, new spears are snow white but change color into the darker ones over time This is another unique trait of this palm. 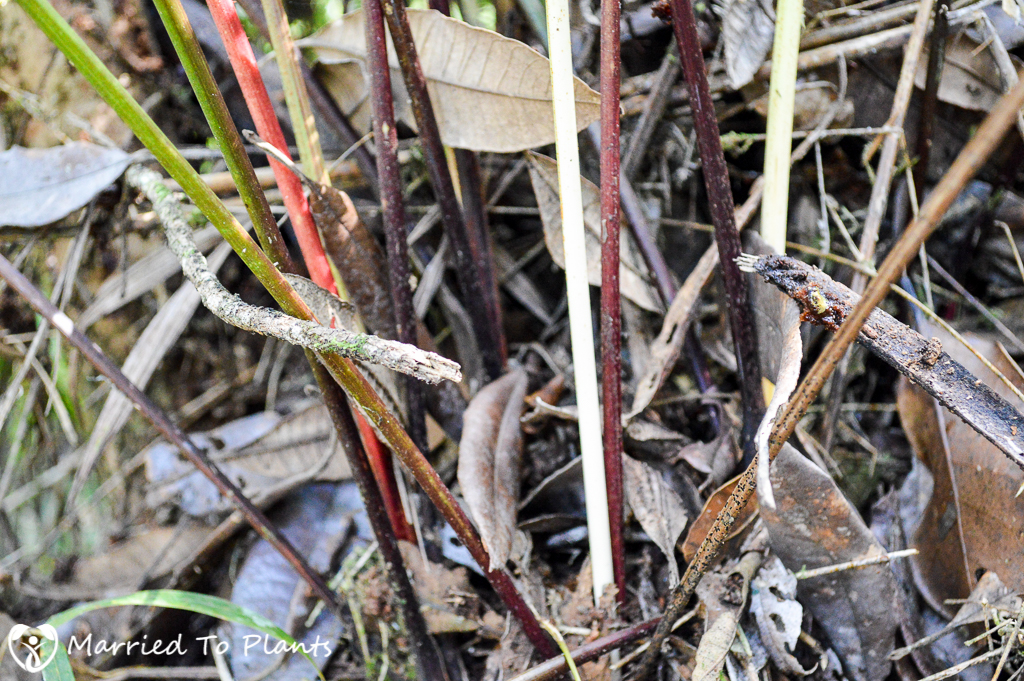 Almost all the Dypsis ‘Black Stem’ that I have seen in the wild and in cultivation have had purple or red flower spathes. This is unusual and seldom seen in the genus Dypsis. 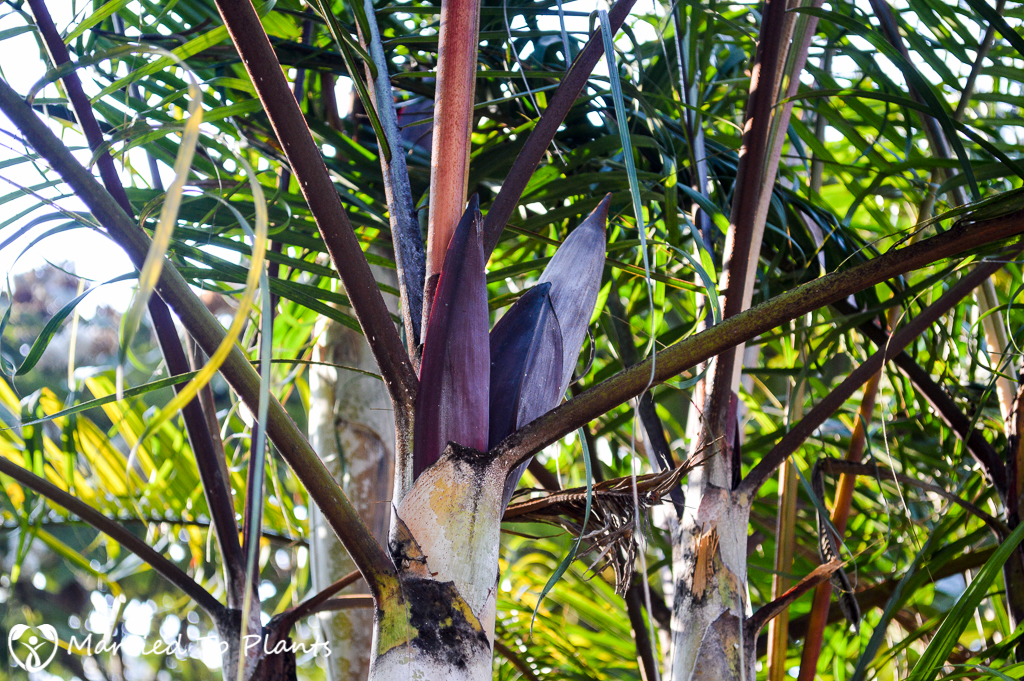 I did find one Dypsis ‘Black Stem’ on the top of a mountain in the Maromizaha Reserve that had yellow flower spathes.

So what is Dypsis ‘Black Stem’? Two years after the pictures made their way around the palm world, young student botanist Mijoro Rakotoarinivo was able to visit the palms at the Vakona Forest Lodge in 2008. It was at that point, while looking at the flowers, that he made the claim that Dypsis ‘Black Stem’ was indeed just another form of Dypsis baronii. Famed Madagascar palm botanist John Dransfield would later confirm this. So a more accurate label for this palm would be Dypsis baronii  ‘Black Stem.’ You can see below that the flowers open red, as all Dypsis baron forms do. 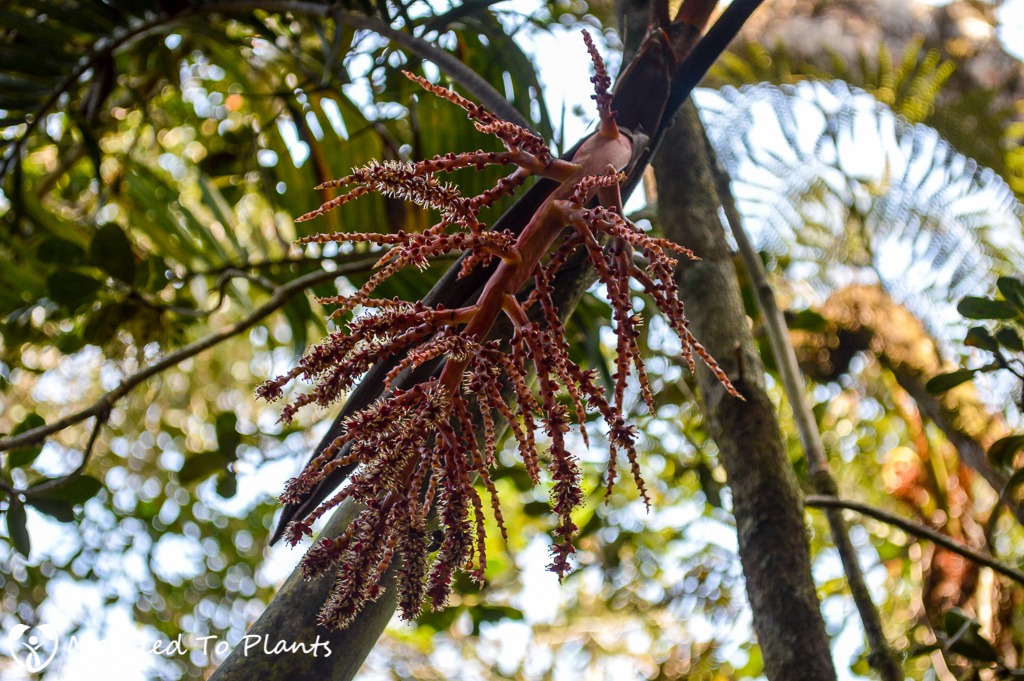 During my trip I was fortunate to see Dypsis ‘Black Stem’ in habitat at two separate locations. The first was at the Maromizaha Reserve where I knew I would find it because other people documented seeing them there. The reserve is seldom visited because the other sights around Andasibe provide more opportunities to see the various lemurs; and that is what most tourists come to Andasibe for. 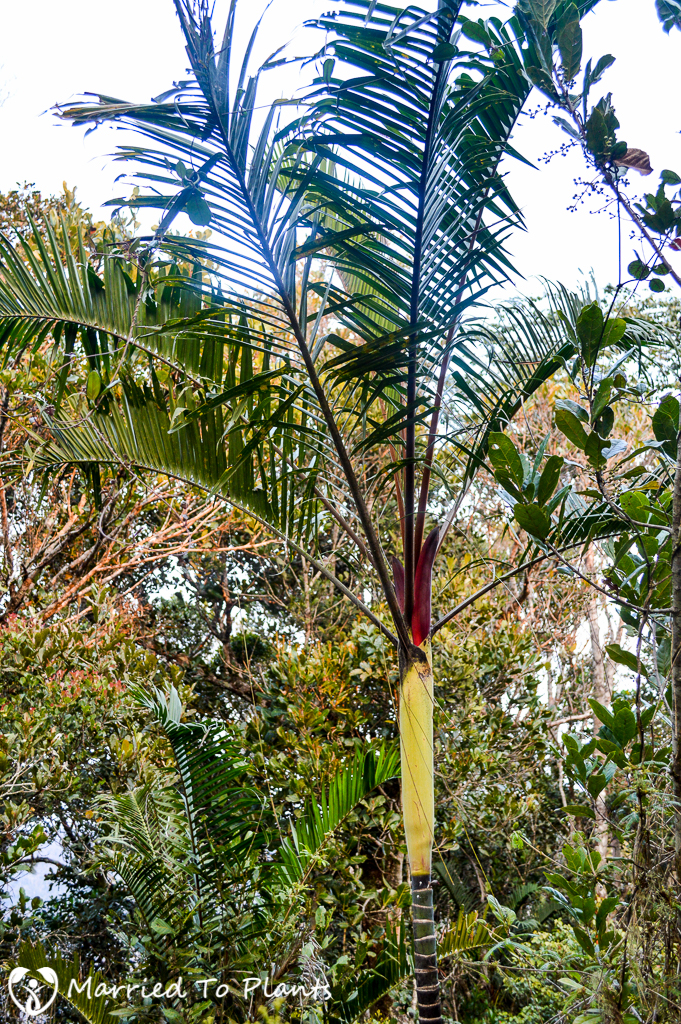 The Maromizaha Reserve gave me the chance to see Dypsis ‘Black Stem’ in a sunnier setting compared to the next place I would see them. Here at the Maromizaha Reserve on top of the mountain lookout a group of them were growing in full sun. The leaves were much more compact. It is also where I saw the plants with the yellow flower spathes. 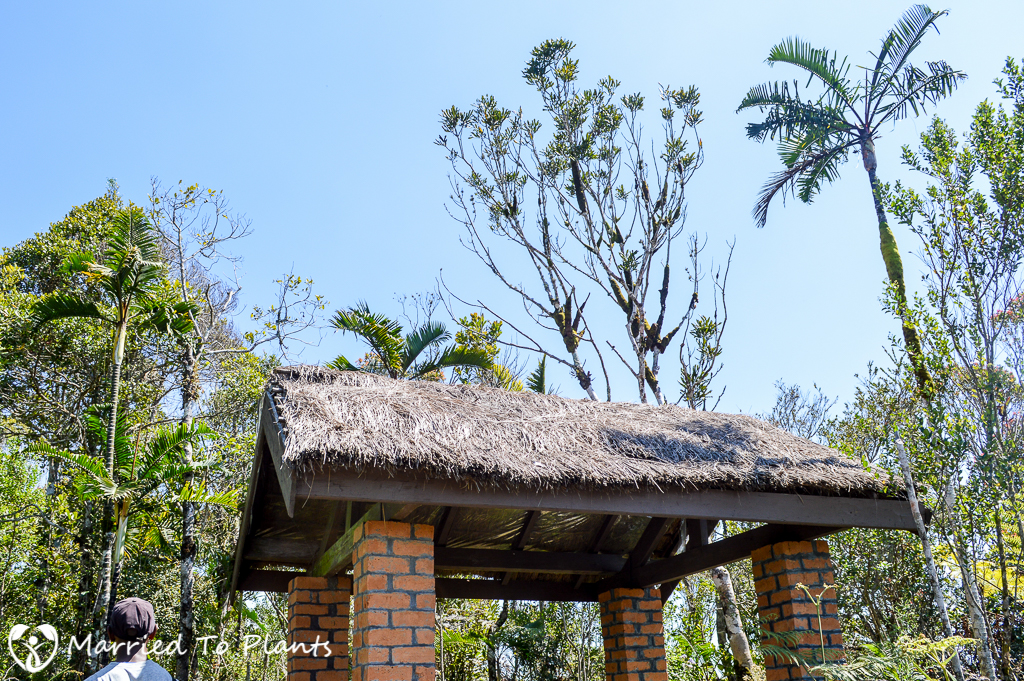 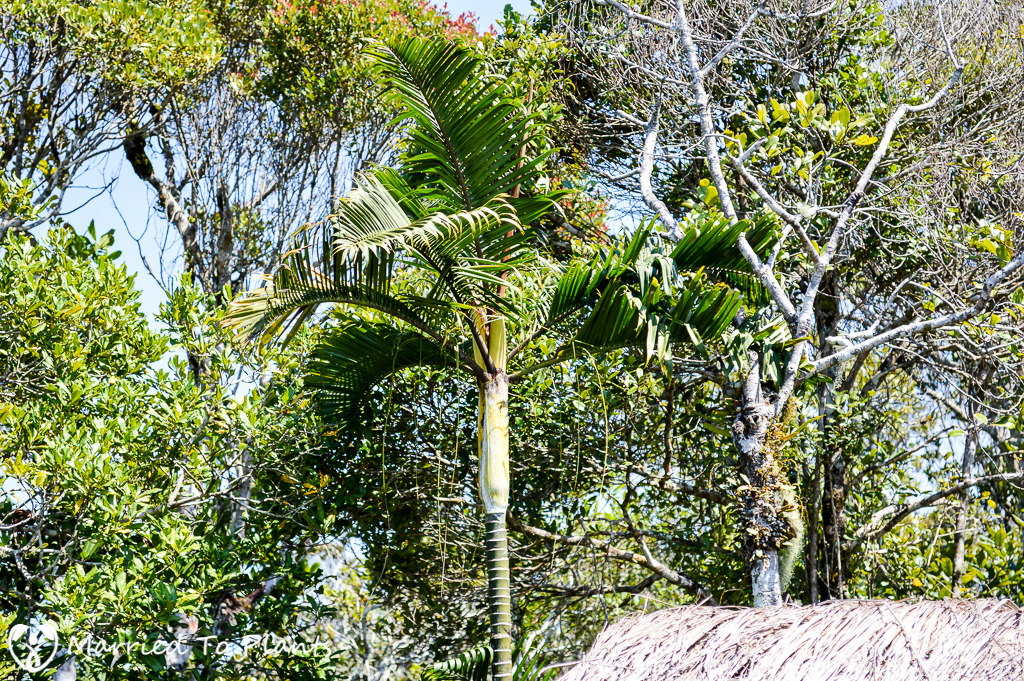 The second place I would see them in habitat was at the Mantadia National Park. It was a surprise to me when I happened upon them, as they had not been documented there as far as I knew going in. Although I guess it shouldn’t be too surprising because this location is much closer to the Vakona Forest Lodge than the Maromizaha Reserve, and you will recall I stated those palms at the Vakona Lodge were transplanted from the wild. It seems much more plausible they came from this location. The palms in this part of Madagascar were growing under the canopy of undisturbed rainforest. I saw a few that were close to 30 feet tall. 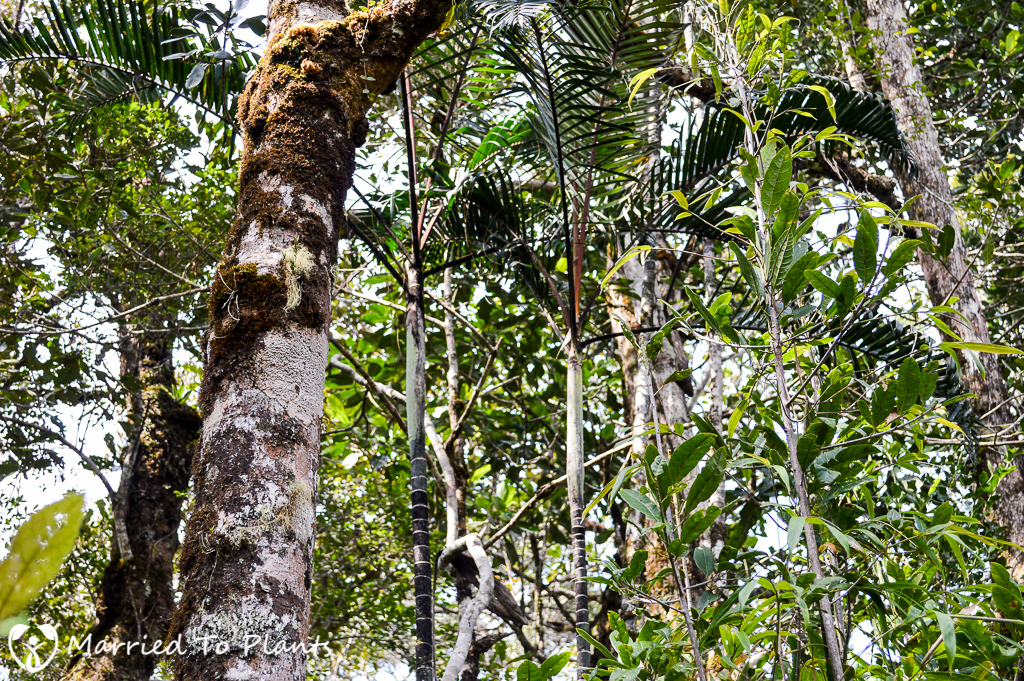 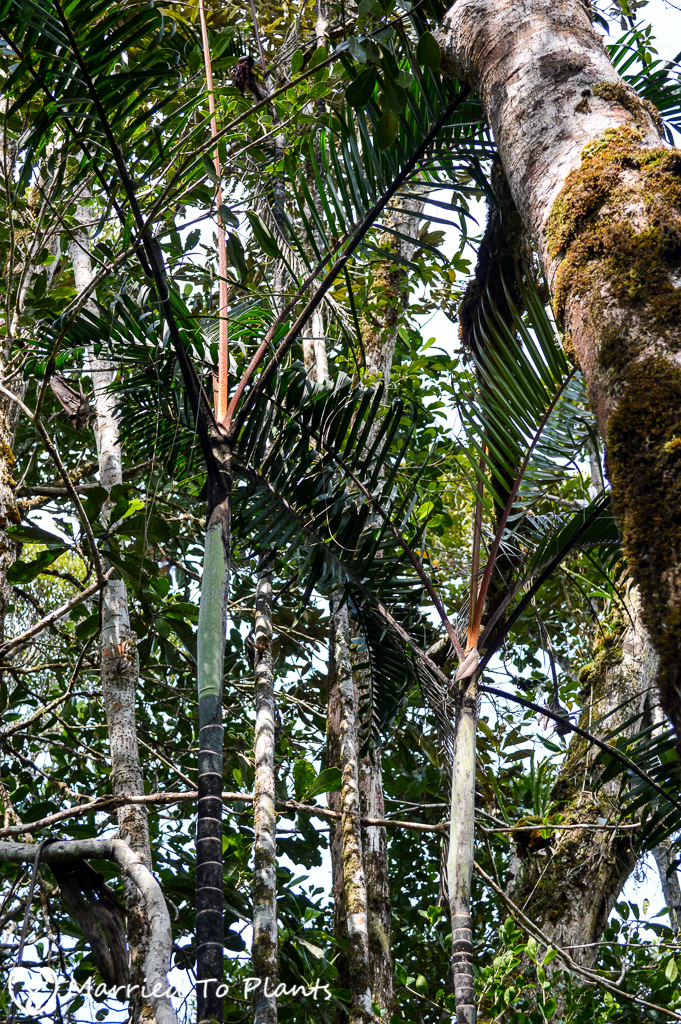 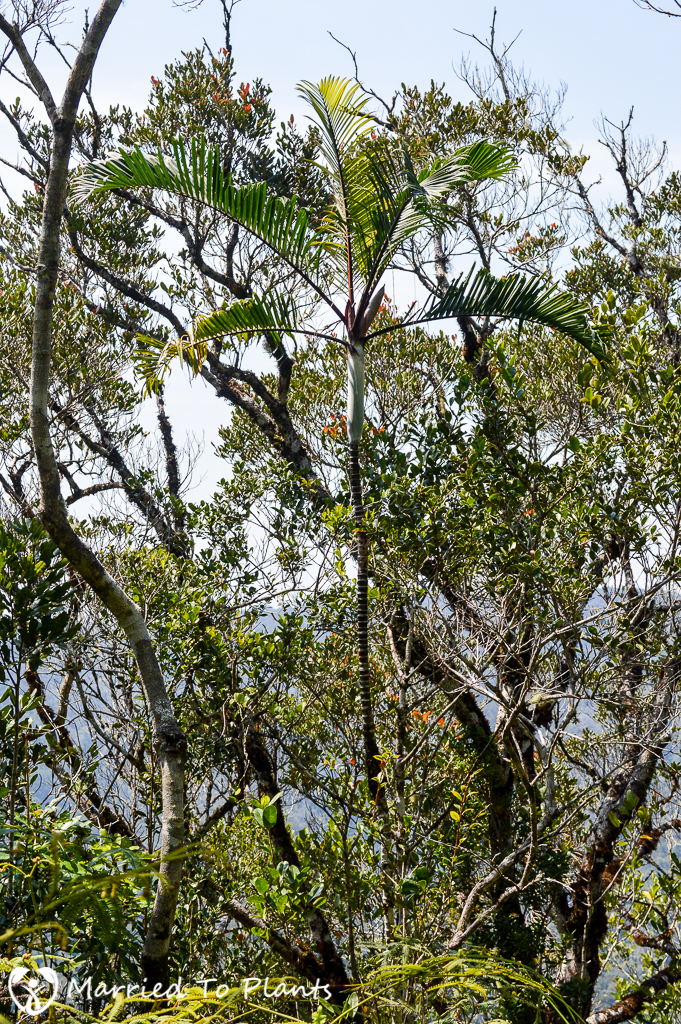 When new palm trees create a frenzy like Dypsis ‘Black Stem,’ the first thing to happen is people want the seed. Because of the remoteness, some seed can prove difficult to obtain. In the case of Dypsis ‘Black Stem,’ it was first collected in 2007 by Gary Levine and distributed to some Australian palm collectors and to Rancho Soledad Nursery. That seed grew into beautiful specimens in Hawaii at the Rancho Soledad Nursery growing grounds. Those palms were later imported to San Diego and sold for an average of $1,000. A small second collection was done by Rare Palm Seeds in 2011 and made available worldwide through their mail order website. The 15-gallon plant shown below is being grown in my greenhouse from that seed collection. While I know other Vakona Lodge guests have brought seed home, overall the distribution of this palm still has not met the demand. This shouldn’t last much longer, as those first plants from the 2007 seed collection are of flowering age. So if you want one, the wait shouldn’t be too much longer. 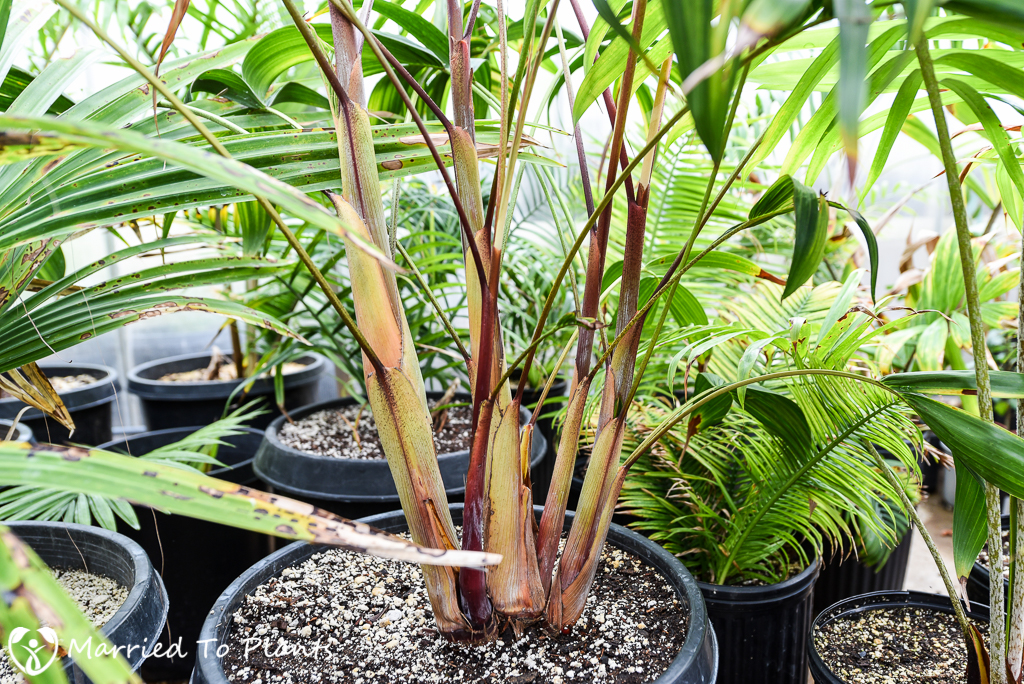 In cultivation, I found Dypsis ‘Black Stem’ to be on par with what I experienced with the more common form of Dypsis baronii. Sadly, I lost my large plant from Rancho Soledad Nursery one winter to some fungus, but not before I was able to gain a few years of growing experience. Some of the things I can share for Southern California gardeners is Dypsis ‘Black Stem’ does not like sun at an early age and is quite slow growing. They like to take their time establishing a large root structure before taking off above ground. They like being well feed and well watered too. To some it up, if you have had success with Dypsis baronii, you will have success with the ‘Black Stem’ form of it as well.

One interesting thing I observed in cultivation was that the color of the palm changes with the seasons. The rich color is at its peak in late summer. By late winter, much of the beautiful coloration is not present (my palm shown above shows the winter color and that is in my greenhouse). Dypsis ‘Black Stem’ color appears to be greatly influenced by heat and humidity.

My month-long trip through Madagascar occurred in October, which is the worst time for collecting palm seed there. Most palms were just beginning their new flowering season and seed from the year before was long gone. Having seen hundreds of palms in Madagascar without any seed, the palm gods must have been looking out for me as I found one Dypsis ‘Black Stem’ in the Maromizaha Reserve that had an old flower on it. I looked on the ground under it and found a bunch of old seed. I grabbed what I could and when I got back to the Vakona Lodge I float tested them. One-third of the seed sunk, telling me they were possibly viable. This is what I ended up taking home with me. 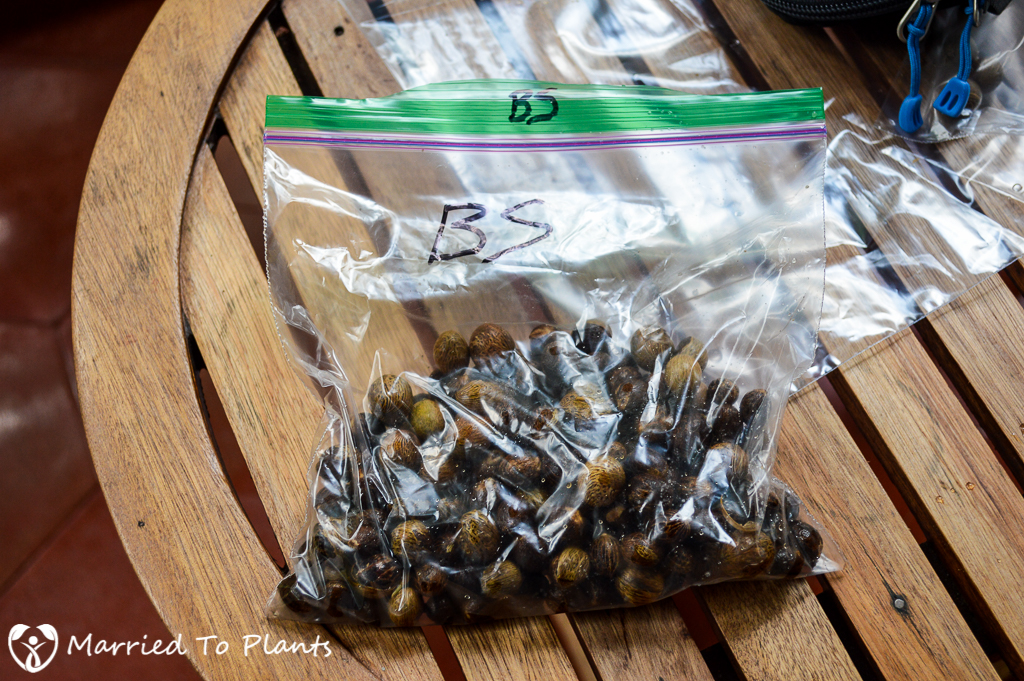 From all that seed I collected, this is what I ended up with 7 months later. Twenty-eight new Dypsis ‘Black Stem’ seedlings to share with other palm lovers in the near future. 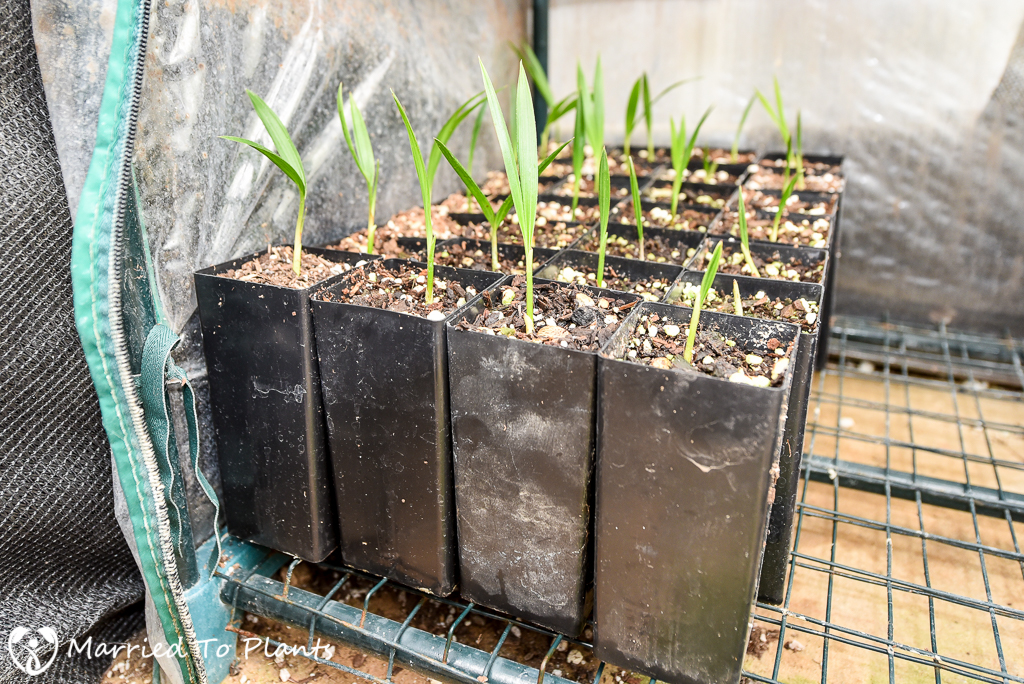 The Dypsis baronii  ‘Black Stem’ is currently one of my favorite palm trees. After looking at all the photos, you would have a hard time arguing against its beauty. I know the obsession with this palm will pass in time and collectors like myself will be on to the next best thing. It always happens that way.