“What is this white-flowering tree I see all over Southern California right now? Cherry tree of some sort?” This is usually how it goes when you first see the impressive blooms of the Evergreen Pear Tree (Pyrus kawakami). When in flower, you just can’t miss this popular landscape tree that can be found planted throughout coastal and southern California.

Much like a flowering Crepe Myrtle is the omen for fall, a flowering Evergreen Pear Tree is the harbinger of spring. It is usually the first landscape tree to flower in the new year, and each late winter it puts on an impressive display. Sadly, it is not a long-lasting display, which is one of the main reasons I have not blogged about this tree before. The last two years I had planned on writing this post only to procrastinate on getting pictures of the trees in bloom. Within 10-14 days, the show is over. So because of the way-too-short blooming season, I won’t plant one in my garden. There are too many other more tropical flowering trees I can grow in Vista that will put on floral displays that can last up to two months. However, there are not many flowering trees that can compete with a blooming Evergreen Pear Tree. Just look at the display on one of my neighbor’s trees below. It is just covered in white flowers. (I apologize for the blown out images in this blog post. This is a hard tree to photograph unless under great lighting conditions.) 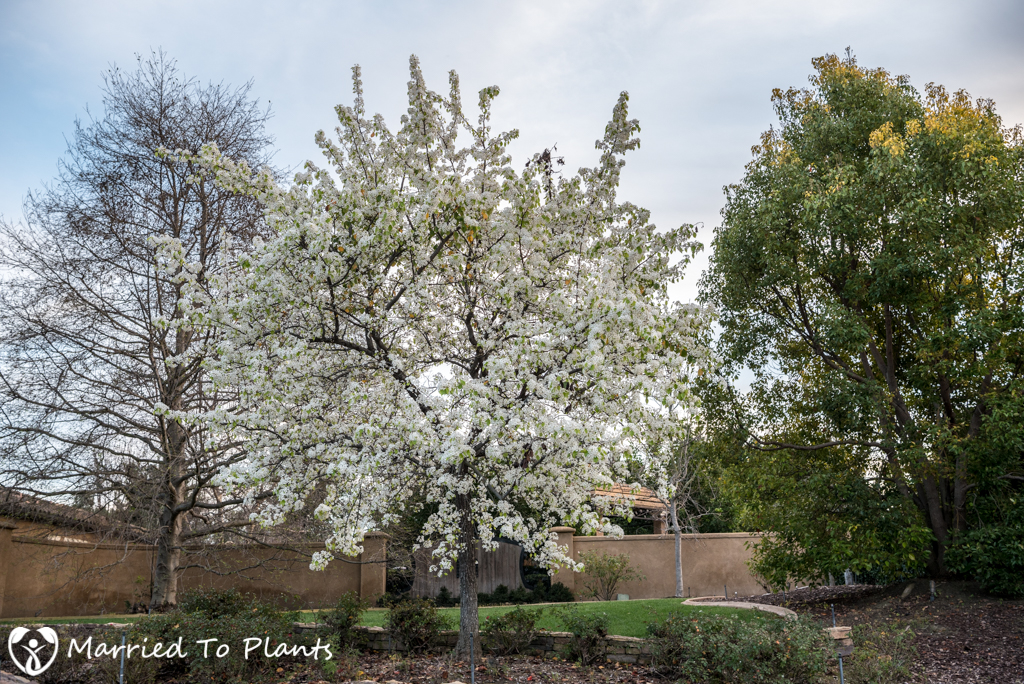 A few pictures of trees from around my neighborhood. 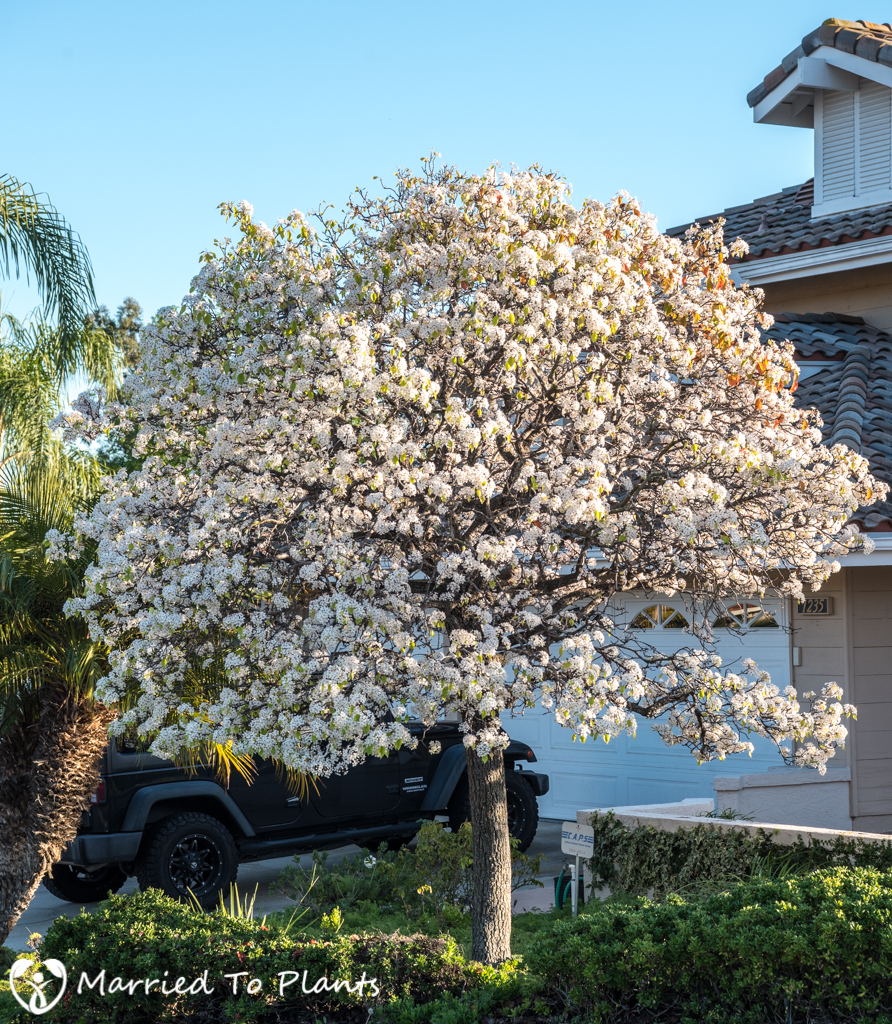 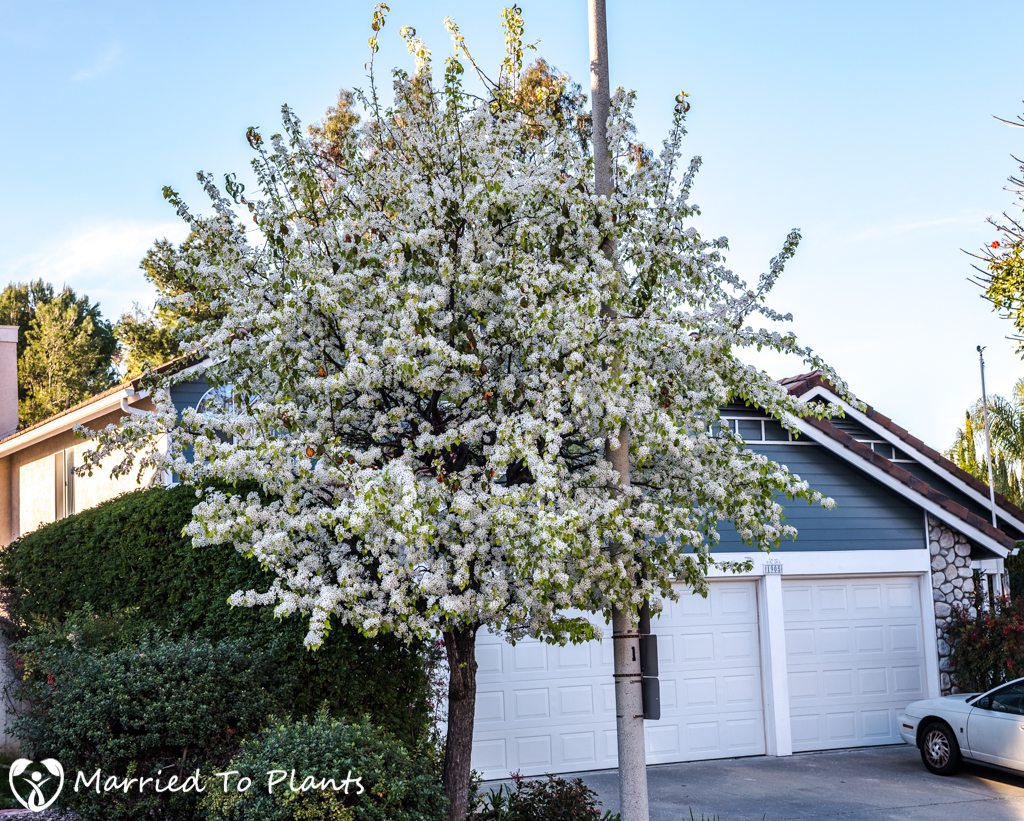 Snow in San Diego? Nope, just the flower litter from the tree above. 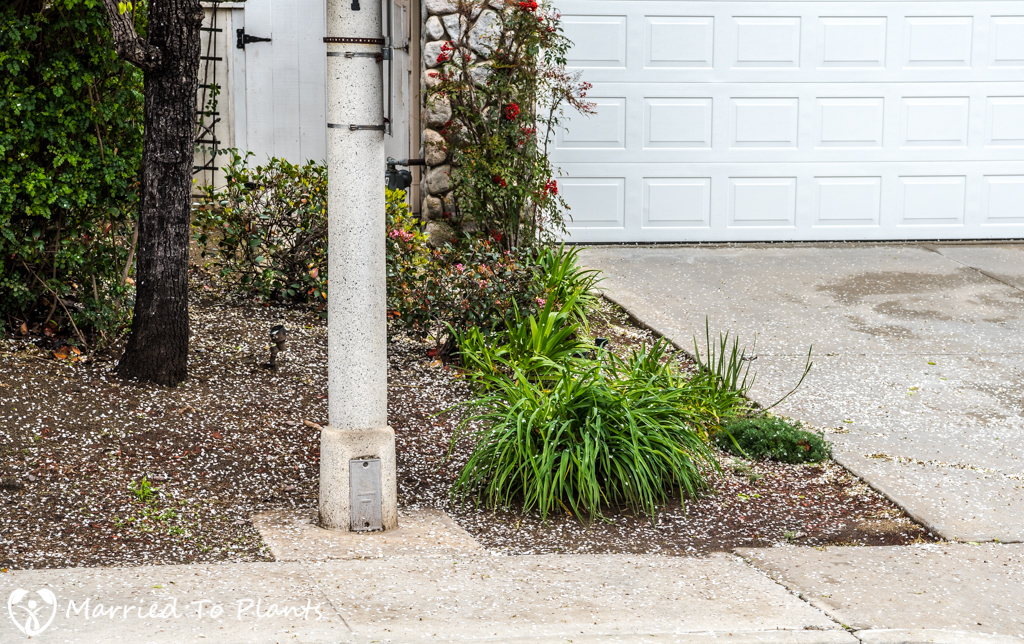 Pyrus kawakami has the common name of the Evergreen Pear Tree. However, that is really just a misnomer. It is really a semi-deciduous tree. It has a USDA Hardiness Zone rating of 8-10 and in the warmer parts of California it will only drop its leaves when flowering and making new leaves in late winter. In colder parts of its growing range that can see frost and freezes, it will drop its leaves much earlier. In some cases the winter foliage can turn red. Because it can handle some cold, it carries with it the characteristic of a fast flowering period. So enjoy scenes like this below while they last. Peak flowering lasts but a few days! 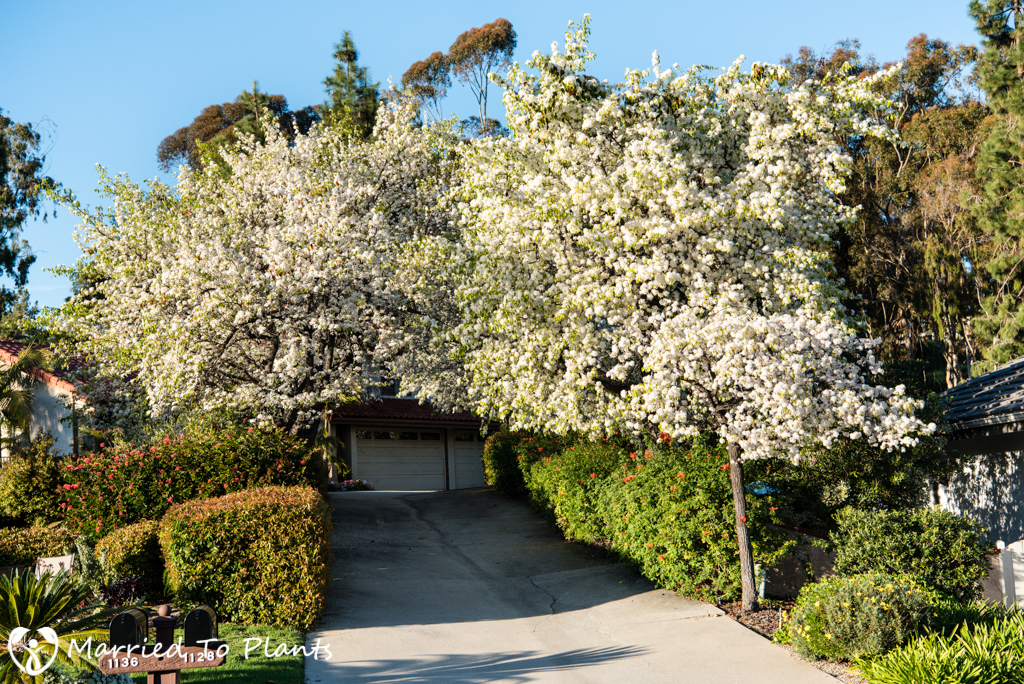 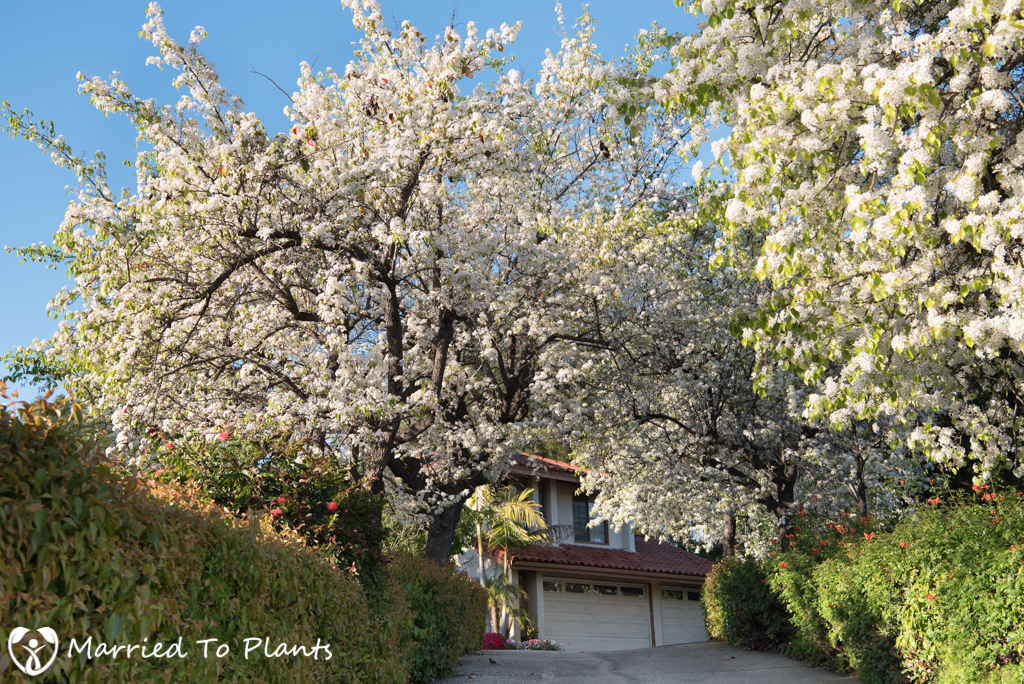 The Evergreen Pear Tree is a pretty dang unruly tree. Wayward in its growth, it can form a low and spreading canopy if left to its own devices. Pyrus kawakami can grow up to 30 feet high and spread out just as far. To get a nicely shaped tree, you will need to do a lot of preventative and corrective pruning. When done right, you can marvel in the unruliness of the branches while sitting under it. 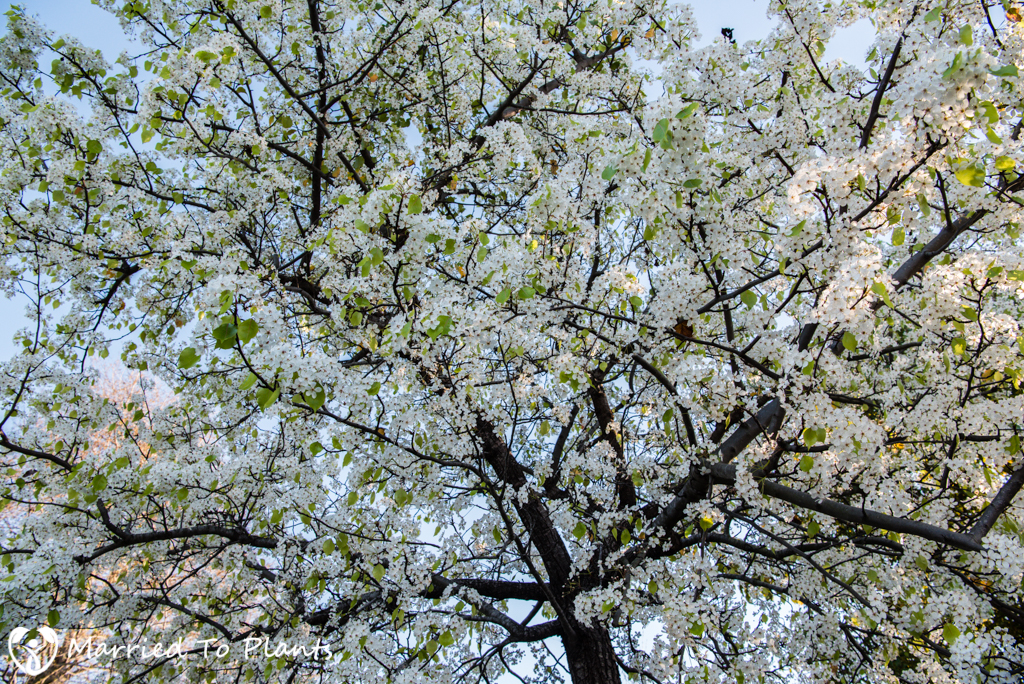 When done poorly like the topped tree in the photo below, you get an ugly, stunted lollipop of a tree. This one just finished flowering and is leafing out. 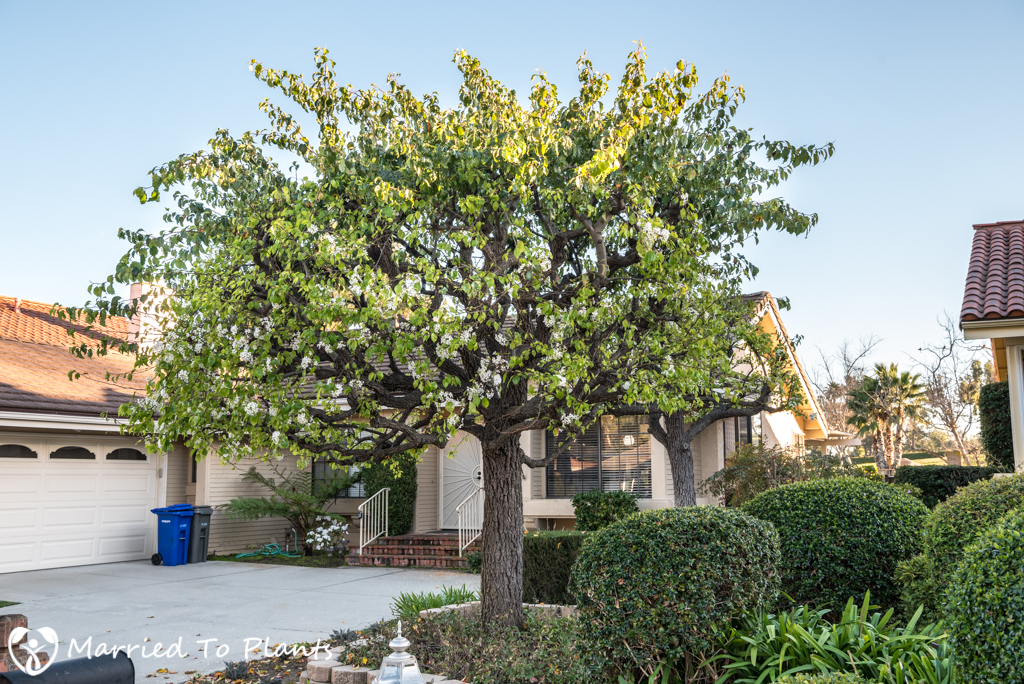 Even in its youth, the bark of Pyrus kawakami is rough and noticeably corrugated. 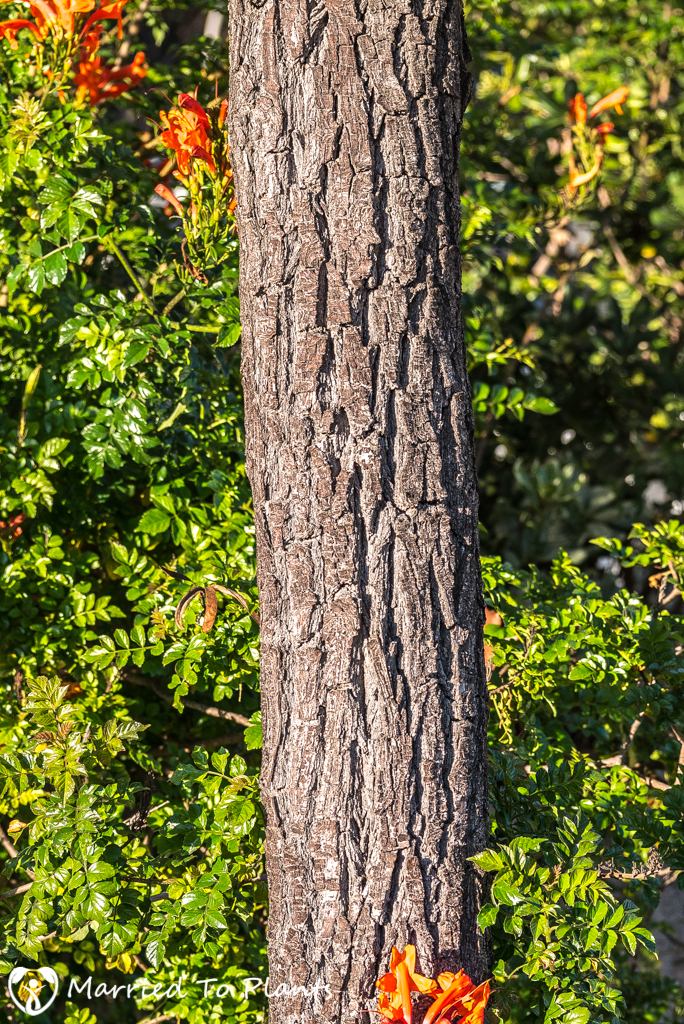 Before continuing, I should probably answer a question that I know has been brewing since you started reading about Pyrus kawakami in this post. “Does it have edible fruit like the pears I buy in a store?” No. The fruit is actually small and inedible. Edible pears are of course in the same genus Pyrus, and the reason this species has the common name the Evergreen Pear Tree. Being in the same genus as the edible pear, you would expect the flowers to be similar, which of course they are. For me, I don’t notice much of a scent from the flower. Nothing like the strong scent its deciduous, cold-hardy cousin Pyrus calleryana can give off. 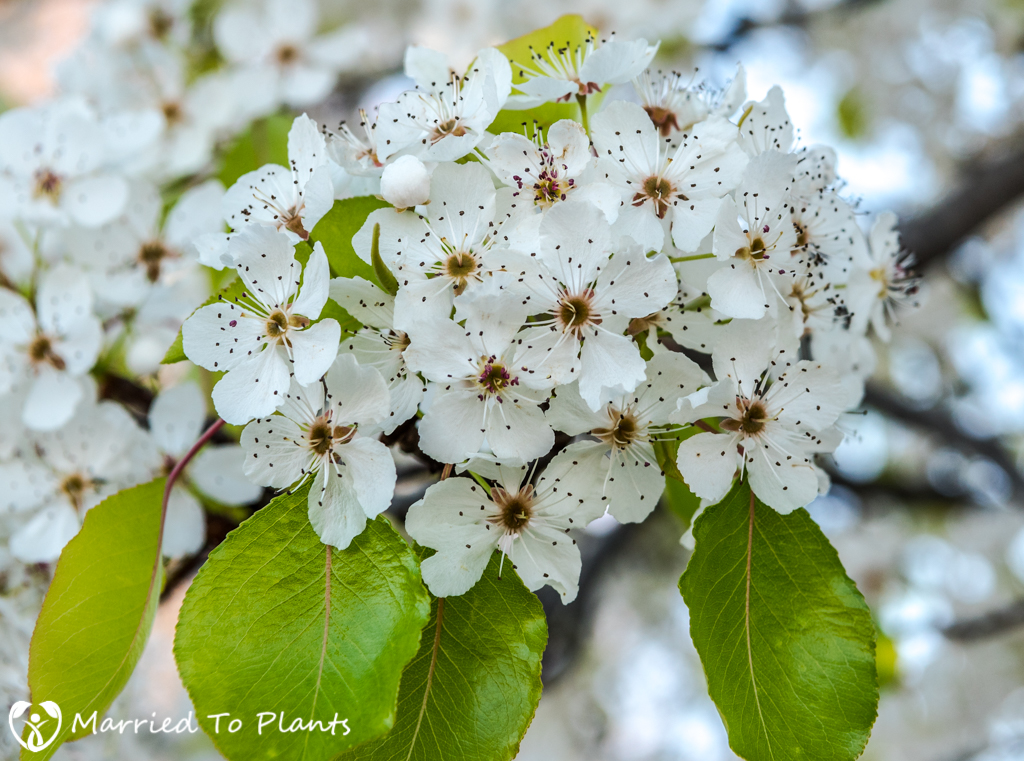 The Evergreen Pear Tree is generally a hardy tree. However, it does suffer from a few really annoying diseases. The two most common are fireblight and leaf spot fungus. In fact, it is because of these diseases that many landscapers have shied away from planting them, and you just don’t see new plantings of Pyrus kawakami like you would have in, let’s say, the 1990s. All these pictures you see in this post were just from a radius of a few small blocks around a neighborhood close to my house that was built in the late ’90s. It is easily the most abundantly planted tree in that large neighborhood. 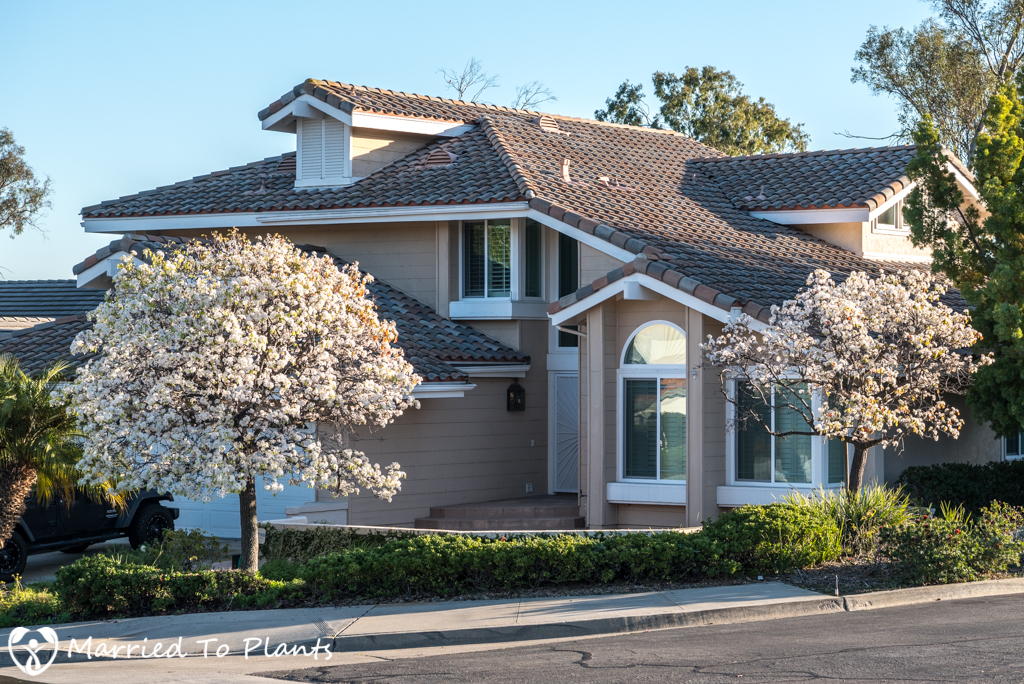 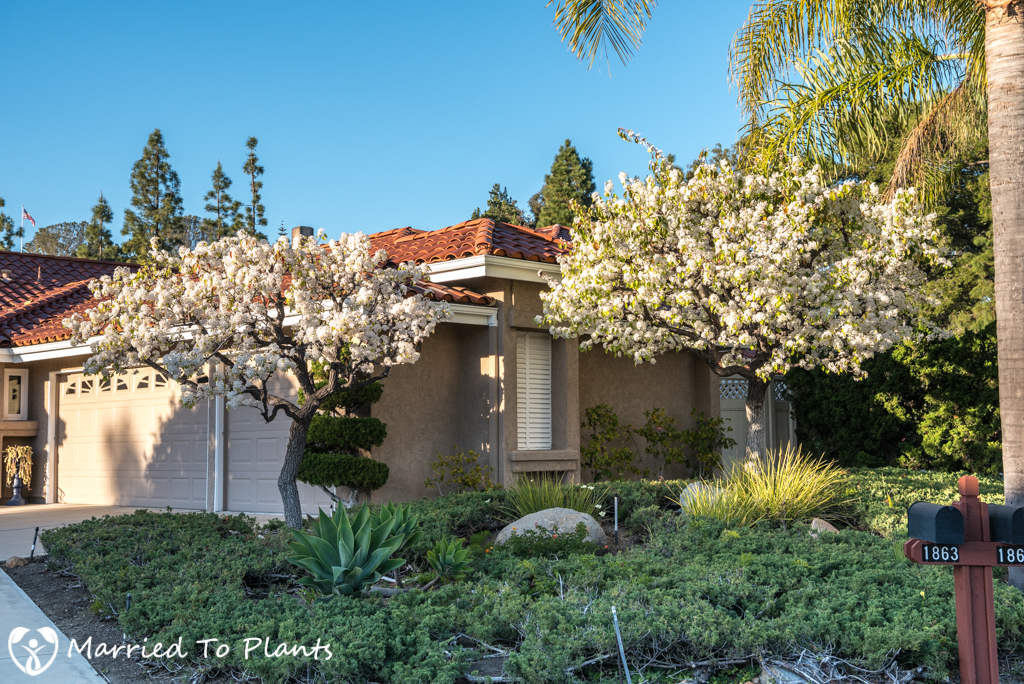 Fireblight and leaf spot fungus isn’t found as much nowadays because nurseries and landscapers have gotten wiser to its planting needs. Keep the Evergreen Pear Tree out of foggy coastal parts of California and avoid rainy spring locations, and you shouldn’t have many issues.

The only pest that can be a problem on the Evergreen Pear Tree are the aphids. They love attacking weaker plants or those over-fertilized with nitrogen. Of course the sooty mold that follows an aphid attack can lead to unsightly growth on the tree or sticky surfaces of things parked or growing under the infected tree.

While not a plant for my garden, the Evergreen Pear really is a great tree. It grows rapidly, is hardy down to 15° F, is pretty much evergreen, and of course, as shown in this post, it has an incredible floral display around March. However, unless you get a picture of one in flower, you only have a brief period of time to marvel at it in bloom.