Back in 2007 I purchased a small seedling of a type of Jacaranda that I had never heard of before; I purchased it from XOTX-Tropico. I was told it had the darkest purple flowers of any of the Jacarandas, so of course I couldn’t pass it up. Once I got it home I checked on Google to learn about my new purchase—Jacaranda jasminoides. What I found on Google certainly confirmed it had a dark-colored flower uncharacteristic of any other Jacaranda, and you can see below from my plant that they really are beautiful.

My Jacaranda jasminoides was grown from seed stock and was not a fast-growing tree like its cousins in the genus. The poor-quality picture directly below is from 2008, with my little helper for scale; and the second picture was taken just a few weeks ago. Granted, I did dig and move this tree twice, but this is still not much growth for a six-year period, particularly for a Jacaranda. 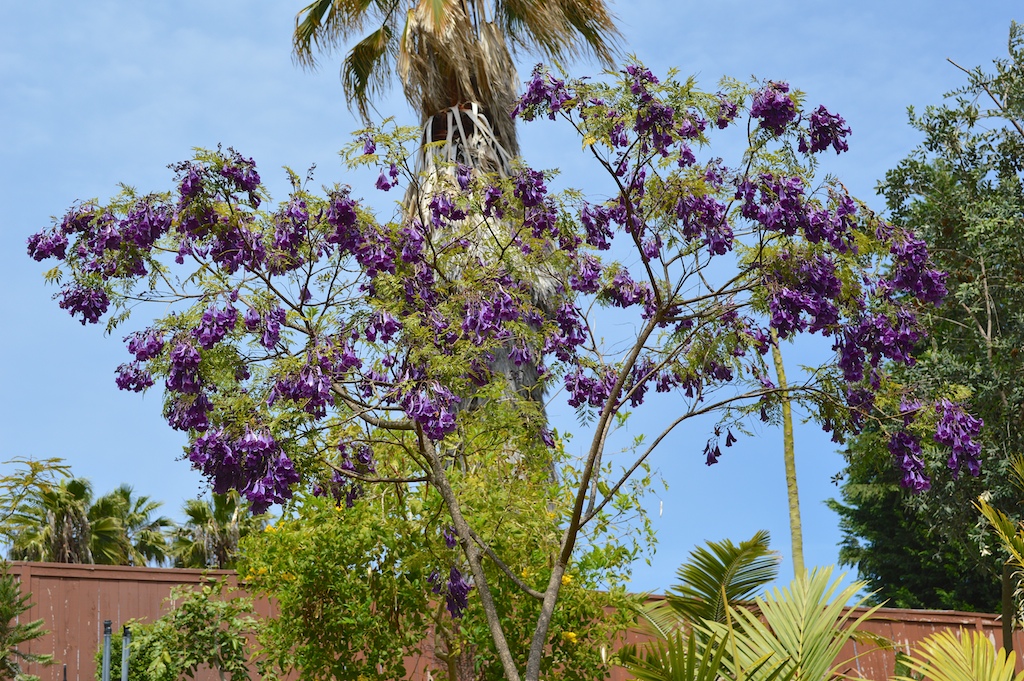 While doing the initial research that I discussed above, I read that the Jacaranda jasminoides that are purchased here in the United States are grafted. Finding this interesting, I decided to purchase a grafted plant from Top Tropicals in Florida to see how they differed.  It only took a few weeks of growing the two side by side to see they were not the same tree. The grafted and true Jacaranda jasminoides had larger leaflets and a bit more of a maroon hue to the flower. It also had a very annoying habit of wanting to grow leggy and top heavy. It became an exercise in futility to try and shape this plant into the small tree it was supposed to be. I found it just wanted to be a rebellious bush. So I ended the rebellion a few years later by sending it to the compost pile. But in growing the two plants side by side I was able to determine that what I had purchased and that was grown from seed stock was in fact a hybrid.

Like all hybrids, certain qualities appear that represent each parent. In this case, from the father we get a tree-sized plant and not the leggy bush I found common with the grafted Jasminoides. We also get a plant with smaller leaflets like those more commonly found in Jacaranda mimosifolia, for example. While certainly smaller than the grafted Jacaranda jasminoides, the leaflets are somewhat bigger then those of Mimosifolia, making it more ornamental in my opinion.

The attributes my tree picked up from the Jacaranda jasminoides mother are what really make this tree unique. The tree is not deciduous like the Mimosifolia. It is in leaf year-round. The second trait it picked up is that it is a rebloomer. It will bloom off and on from spring through late fall. Spring of course is the biggest bloom, as shown in my tree in the pictures above.  The last trait, and of course the most important, is the flower color. My Jacaranda jasminoides hybrid shows the pretty dark purple flowers that you can find on the grafted plant. In the pictures below you can see how the color differs when compared to flowers from two different Mimosifolias. 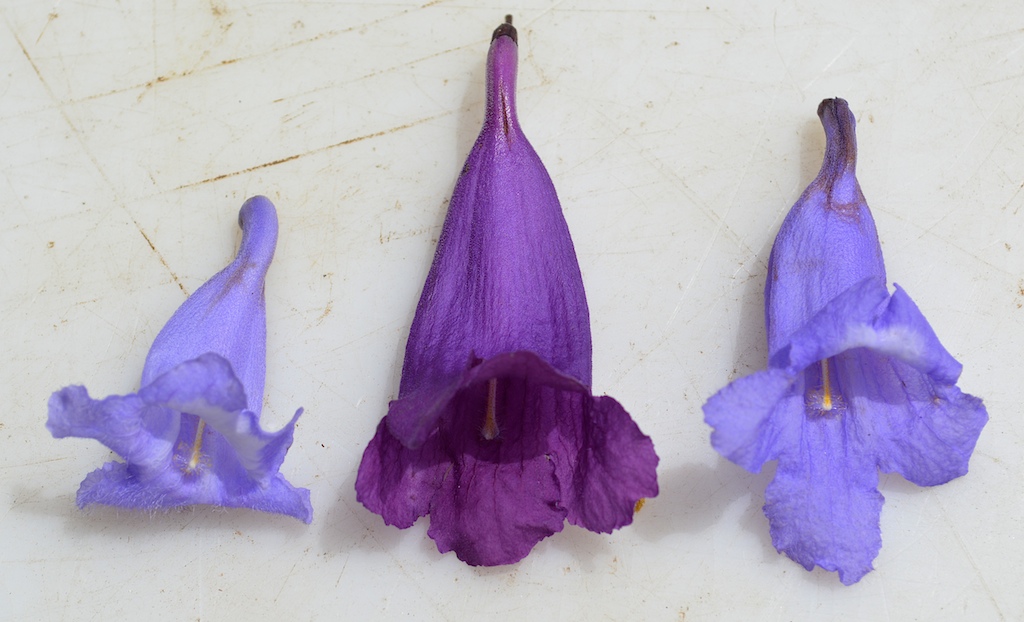 I feel pretty fortunate to have this plant. To the best of my knowledge this was only a one-time seed offering (from Thailand) and no one knows what Jacaranda species the father plant was. My tree has yet to set any seed—and would be great if it never did, as I find other Jacarandas unsightly when in seed. I will need to grow this tree out for a few more years to know if this is another trait or not. Many flowering trees won’t produce seed until older. But then again, maybe seed would be a good thing if it germinated and grew to look like my tree.