I didn’t know it before my visit to Oaxaca, Mexico, but this state is the location of the widest tree trunk in the world. Once I found this out, it of course became a must-see stop. Sadly, my traveling companions were not as excited. After a very long day touring the ruins of Monte Albán and sightseeing around Oaxaca the day prior, my wife and kids were “Oaxaca’ed-out.” On the day I headed out to see the “Widest Tree Trunk in the World” with my family, I couldn’t help but recall Chevy Chase in National Lampoons Vacation telling this family, “Hey, hey, easy kids. Everybody in the car. Boat leaves in two minutes… or perhaps you don’t want to see the second largest ball of twine on the face of the earth, which is only four short hours away?” Well, the widest tree trunk in the world was only 30 short minutes away, but concessions had to be made to get the family back out. The wife was promised we would only be gone half the day so she could relax at our hotel pool, my son was promised a virgin piña colada, and my daughter held out for a pink poncho. What a plant lover must do sometimes to get his less-than-enthusiastic traveling mates into a taxi for some good, old-fashioned plant fun.

The widest tree trunk in the world belongs to the Árbol del Tule (Spanish for The Tree of Tule). El Árbol del Tule is located approximately 9 km east of the city of Oaxaca, on the grounds of a church in the town center of Santa María del Tule, a town that was actually named after the tree. At first glance the tree wasn’t overly impressive. Sure it was big, but not what I figured going in. Below you see my super excited companions posing on the El Tule sign in front of the tree. 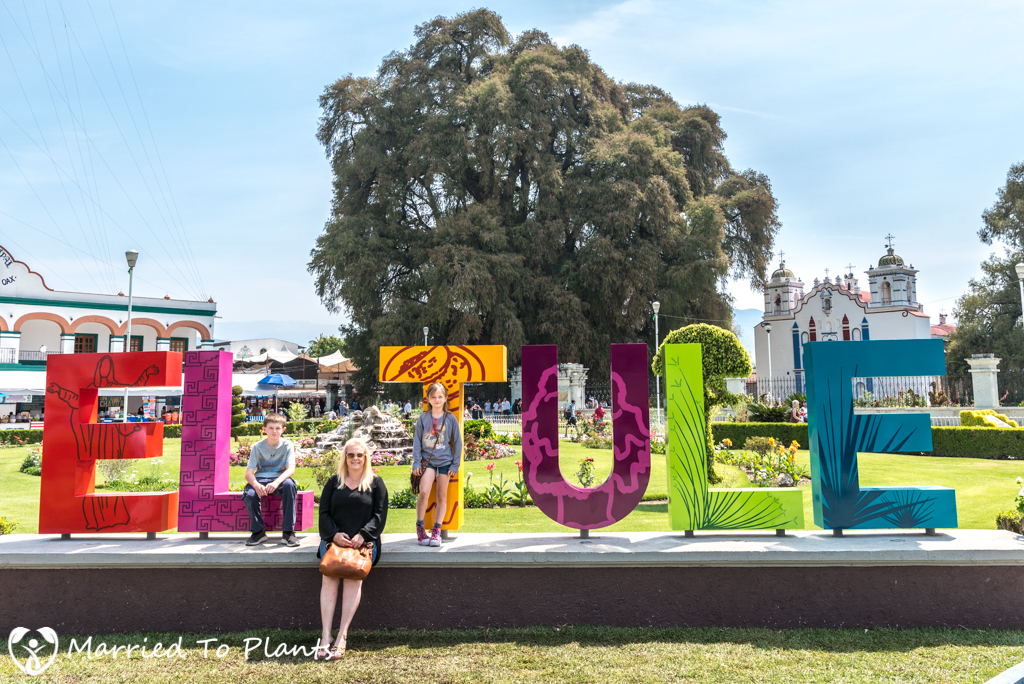 The Árbol del Tule is by far the largest of the seven very large and ancient cypress trees growing in the area. Below you can see the Árbol del Tule to the left of the catholic church that was built in the 17th century. The tree is 116 ft (35.4 m) tall according to a laser measurement done in 2005. 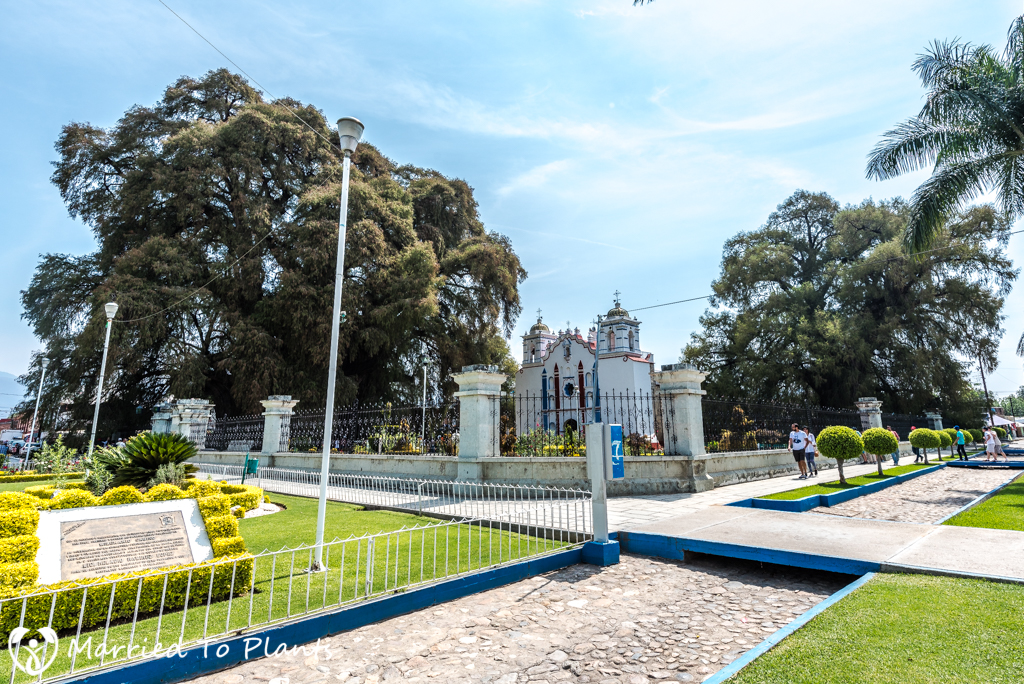 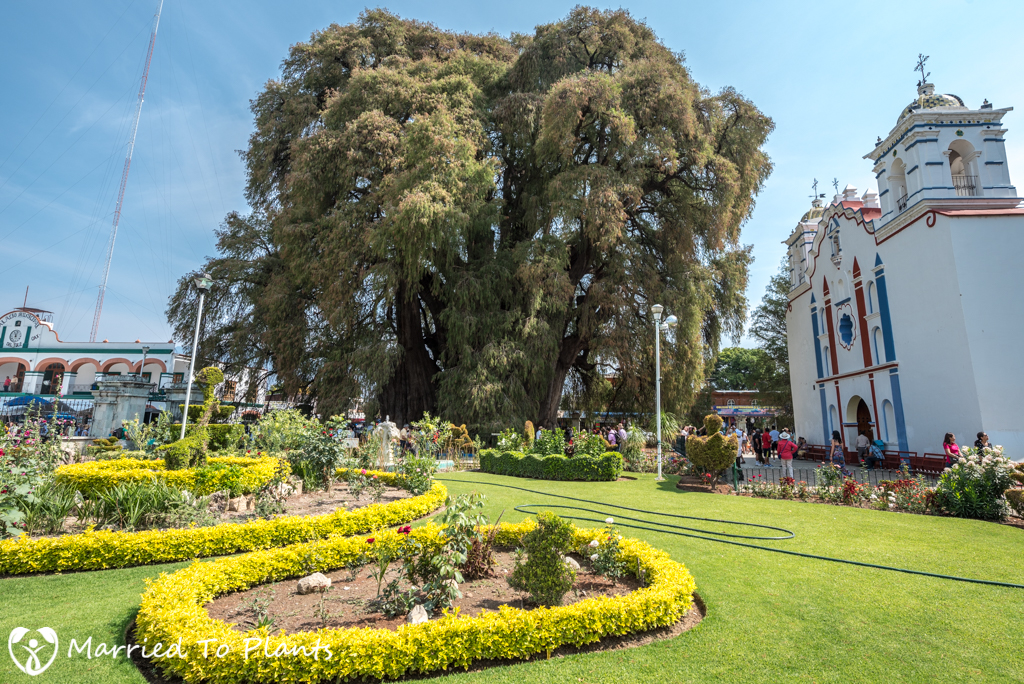 Árbol del Tule is a very popular tourist attraction for Mexicans. Depending on the time of year, it can become pretty crowed around the tree. October 7th is the busiest day, as each year local residents celebrate the famous tree. I visited the tree on a Monday morning and as you can see, there was a fair sized crowd. 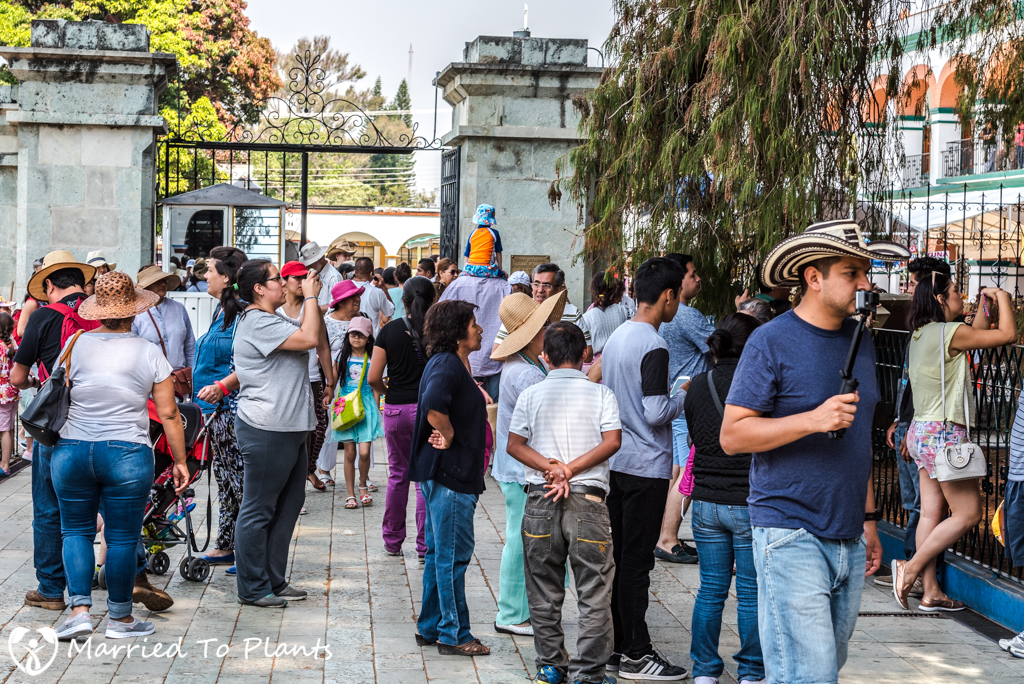 So let’s get to the tale of the tape. I hope you can read Spanish. 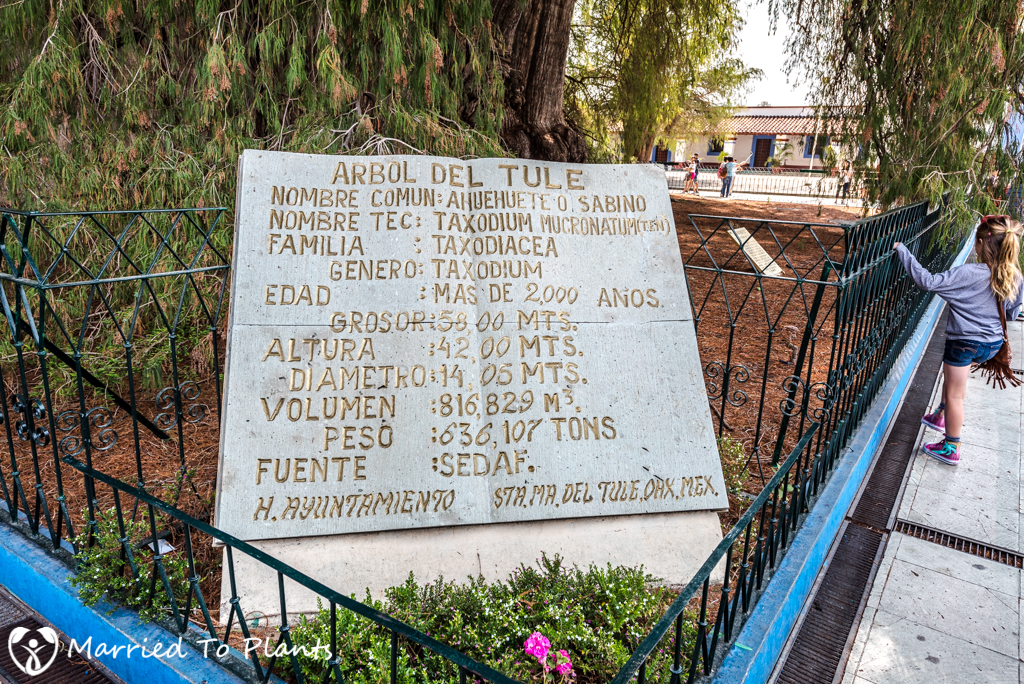 Thank goodness for Wikipedia. Using it I can tell you the details in English. As of 2005 recordings, the Árbol del Tule had a circumference of 137.8 ft (42.0 m), which equates to a diameter of 46.1 ft (14.05 m).  As you will soon see, the trunk is heavily buttressed, giving a higher diameter reading than the true cross-sectional of the trunk represents. If you were to round the trunk out, it would have a diameter of 30.8 ft (9.38 m). Still making it the widest tree in the world. 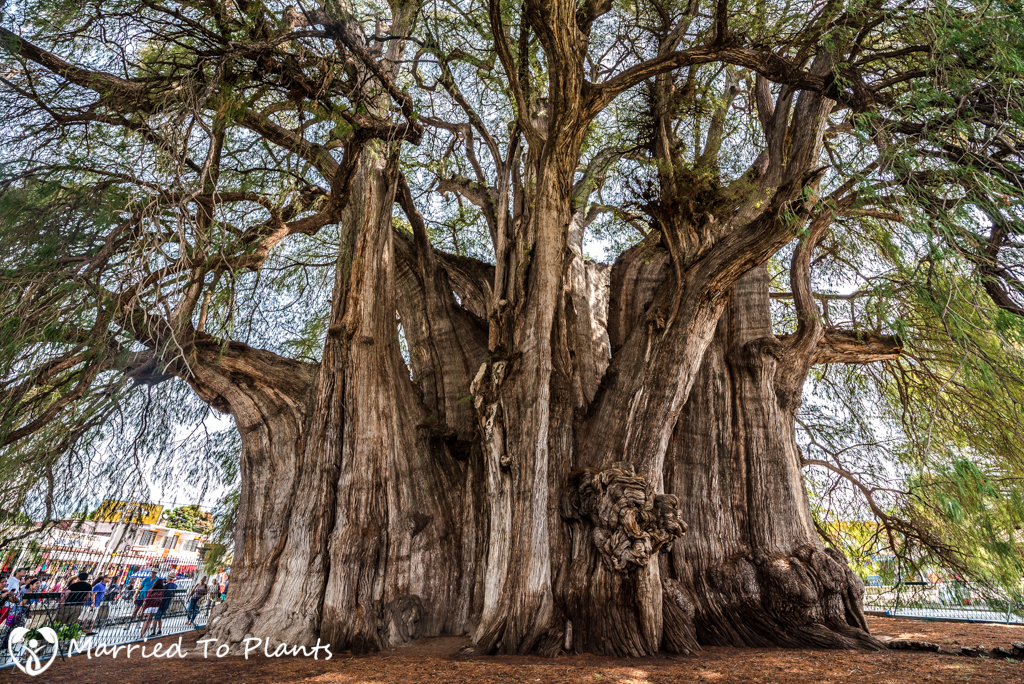 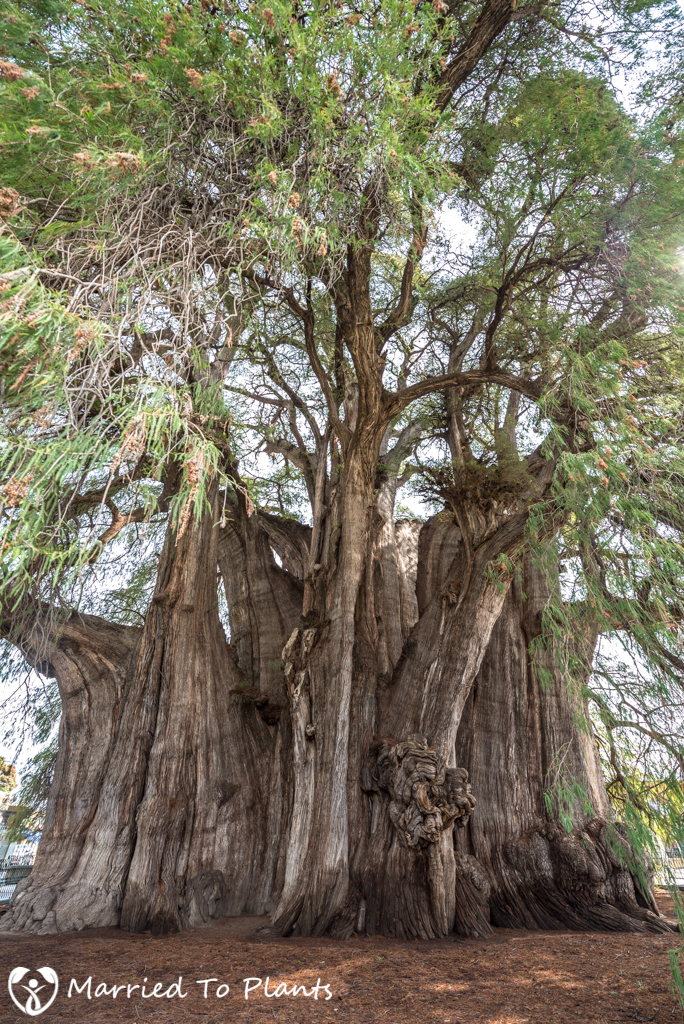 The Árbol del Tule is an approximately 1,400-year-old (some sources say over 2,000) Montezuma Cypress (Taxodium mucronatum). The Montezuma Cypress is Mexico’s national tree, and this one was growing back when the civilization at Monte Albán was in its prime. For an impressive amount of generations, people have been looking up through its airy canopy.

For a while, there was speculation as to whether the trunk was made up of several trees, but after a DNA examination it was determined that the Árbol del Tule is indeed a single tree. Looking at the tree from all sides can show you what led to this incorrect belief. 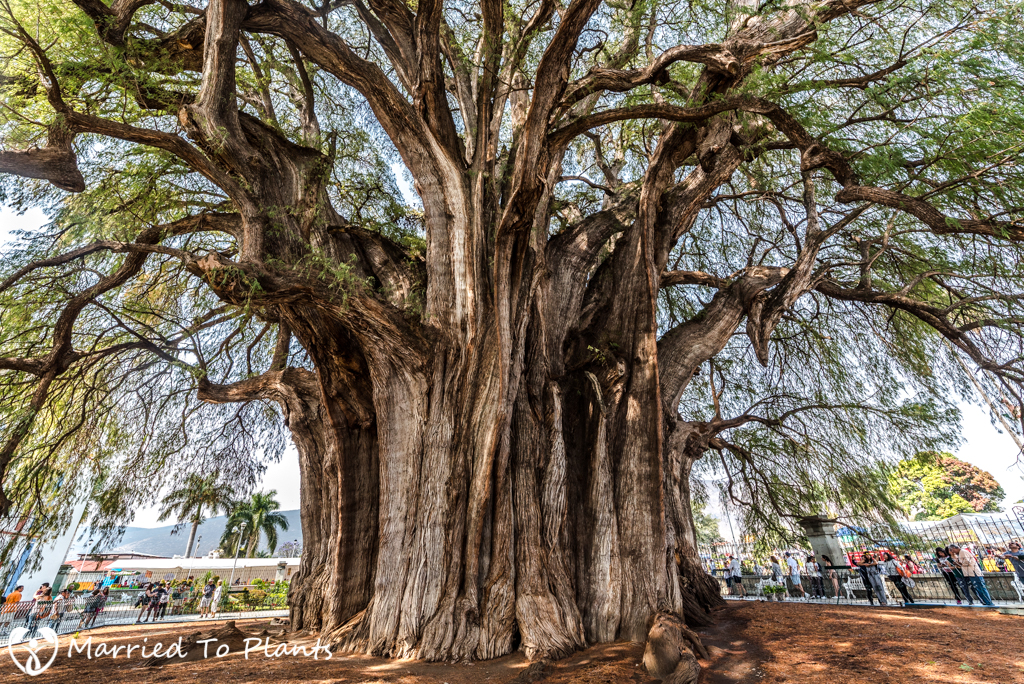 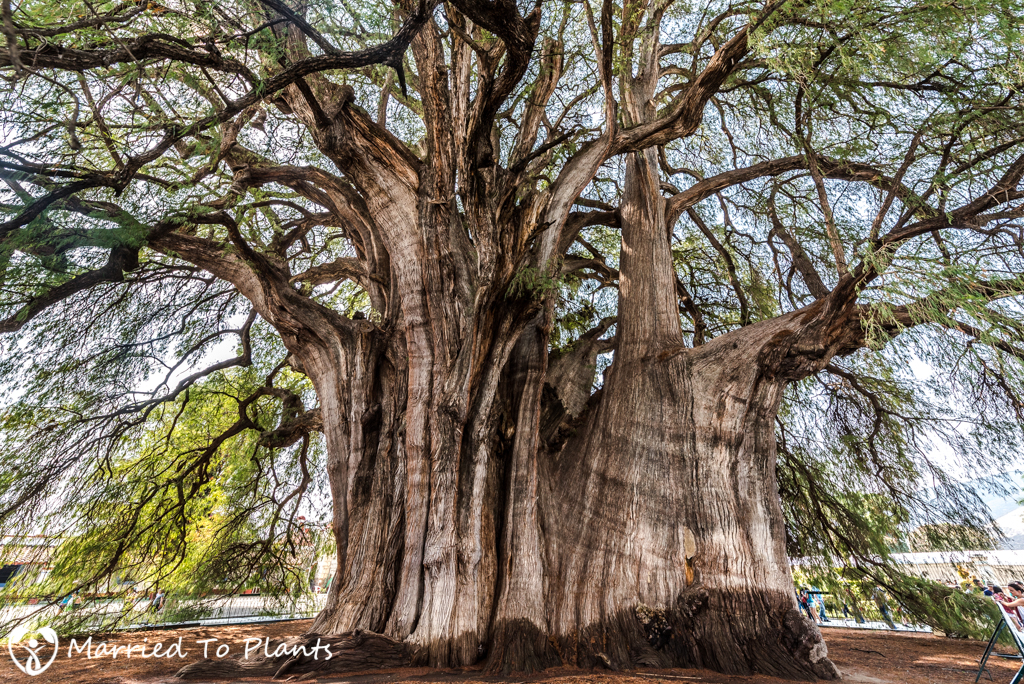 This side of the tree is like the keel on a giant ship. 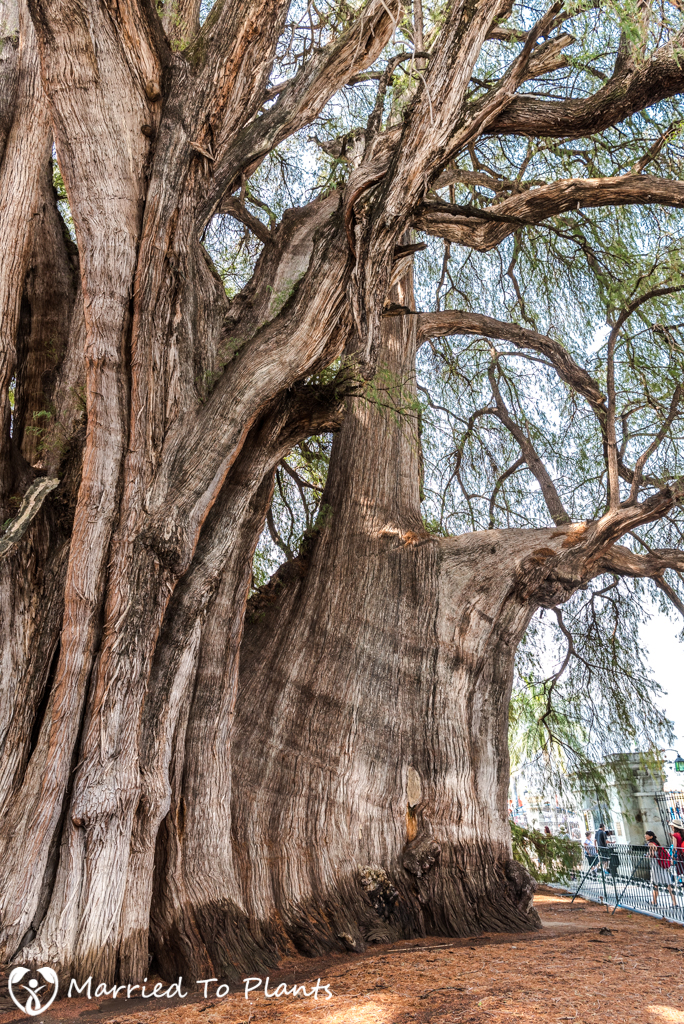 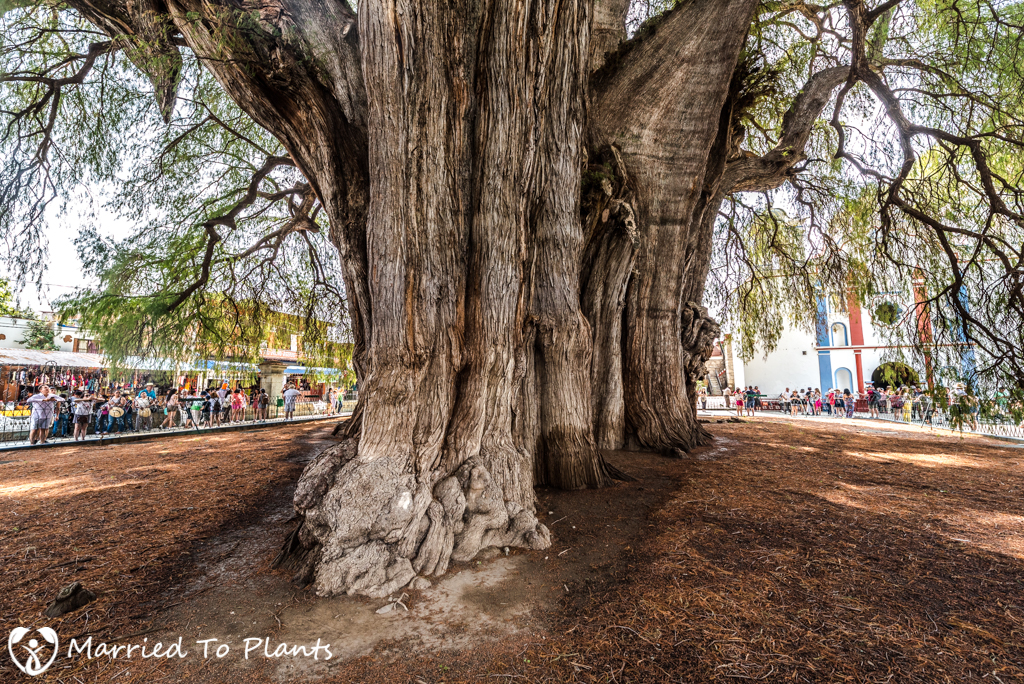 Unfortunately, the Tree of Tule is enclosed by an iron fence which prevented me from having someone stand next to it to give it proper scale. Pictures can not do this tree justice. It is much larger in person. Mankind being its own worst enemy, the tree requires the extra protections the fence provides. Without it people would be climbing all over it and peeling off bark for a souvenir. Signs even had to be placed on the fence to tell people not to break off branches from its low-hanging canopy. 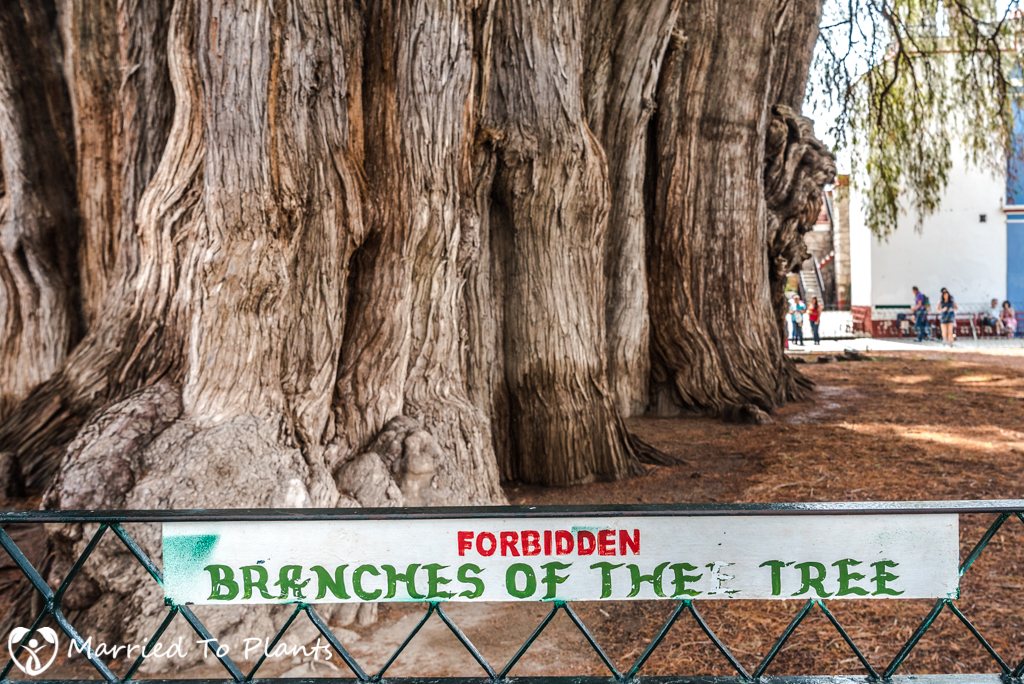 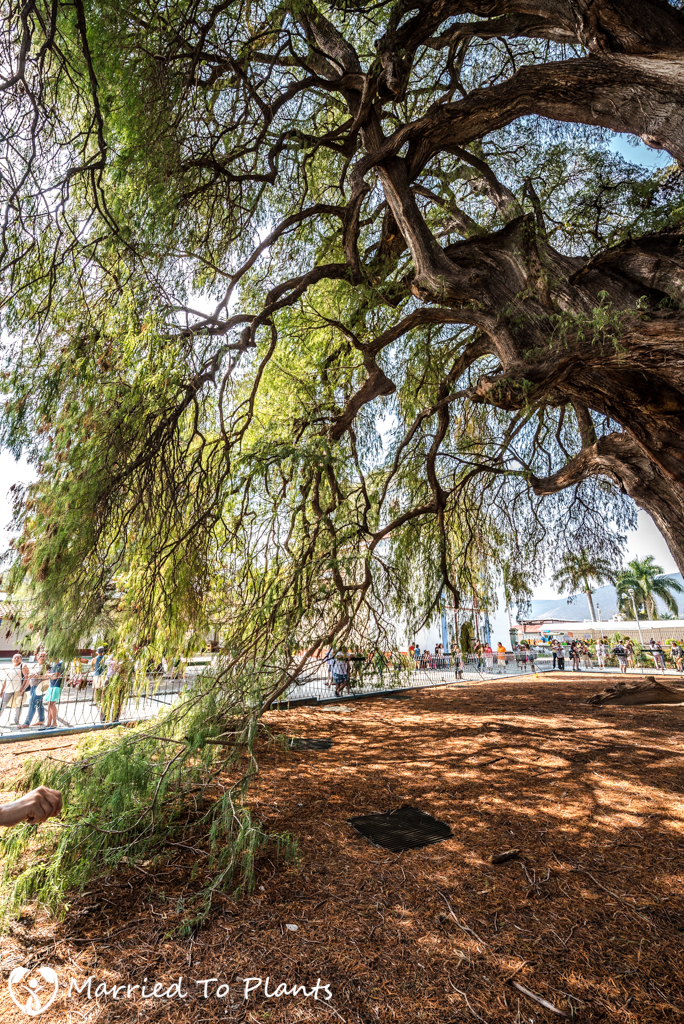 Scattered around parts of this massive tree are animal figures. While some took imagination, others like the lion (first photo below), the elephant (second photo) and the deer (third photo) were easy to spot. Can you see them? 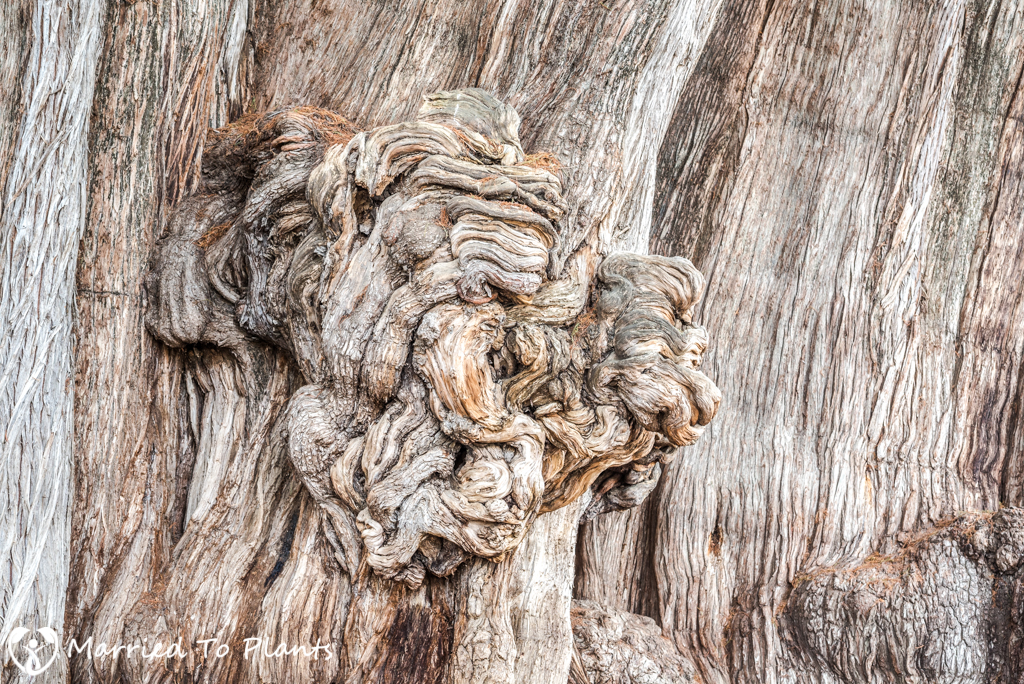 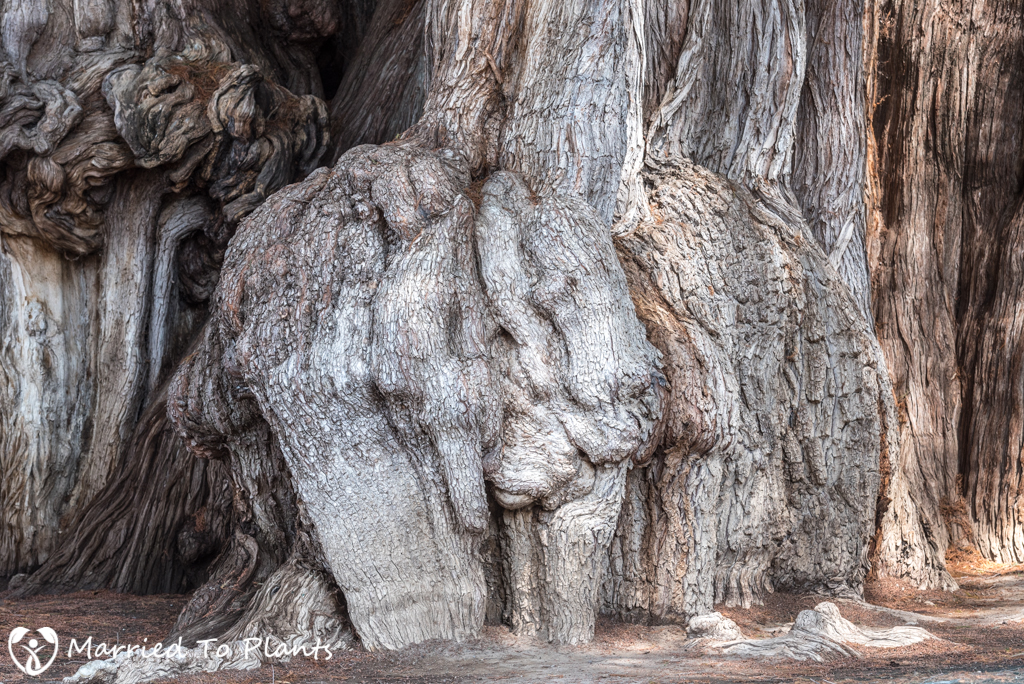 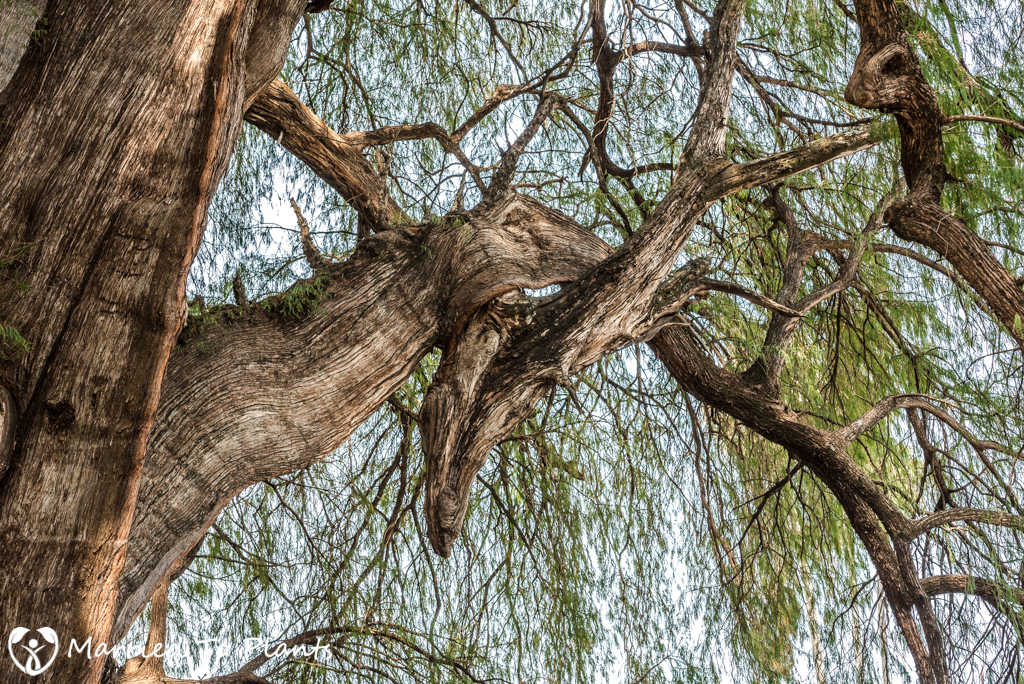 There were also a few parts of the tree which were cut off. Most likely old, dead branches or ones that had broken off. 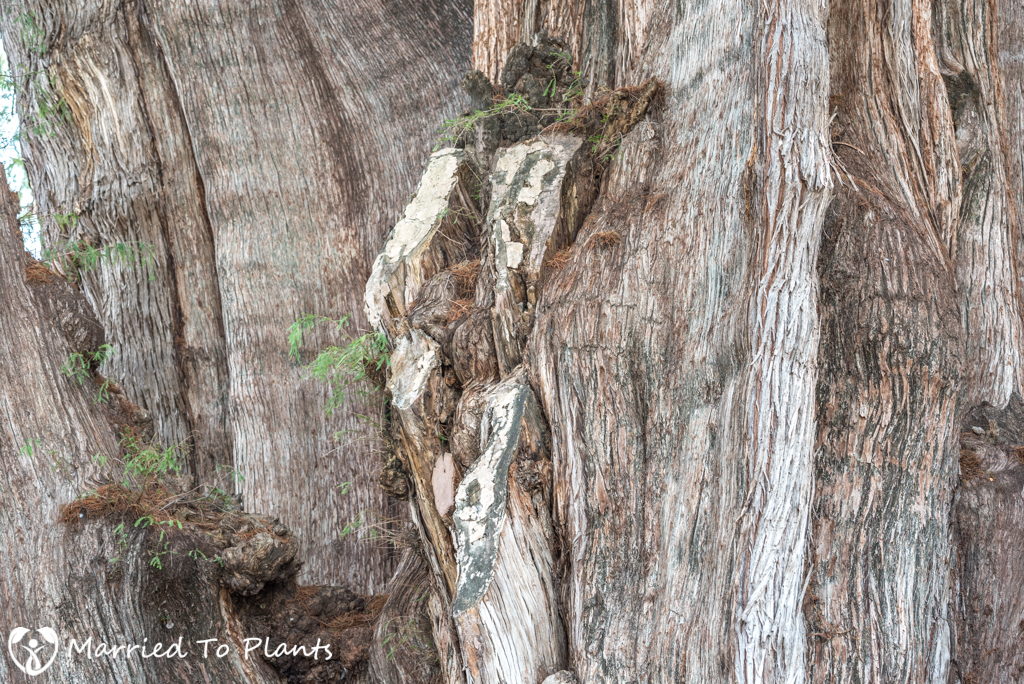 When you look closely at the photographs I posted, you will see a lot of brown in the canopy. It has been written that this tree of over 1,400 years is slowly dying because of pollution and a decrease in available water. In talking to one Mexican tourist that was showing me the animal figures in the tree, he told me that it is really just an urban legend – one he first heard over 20 years ago when he first visited the tree. The reality is that the tree is still growing and because of its value to the local people, they now take extra care of it, ensuring it gets enough water. Can you imagine how much water this tree takes up every day?

I did see a lot of dying leaves on the tree during my visit. But apparently this is a common thing found in Montezuma Cypress. If you look to the center left in the photo below of the dead leaves you can see the bright green, young female cones of the tree. 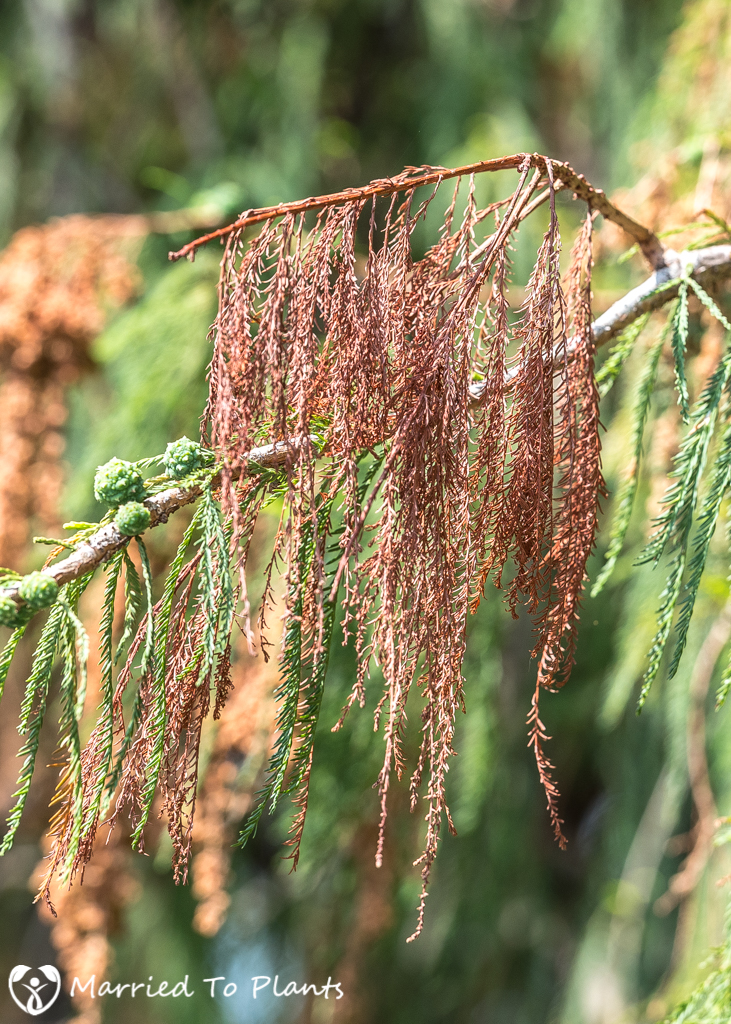 Most of the brown found in the canopy were the pollen cones the tree was producing at the time of my visit. 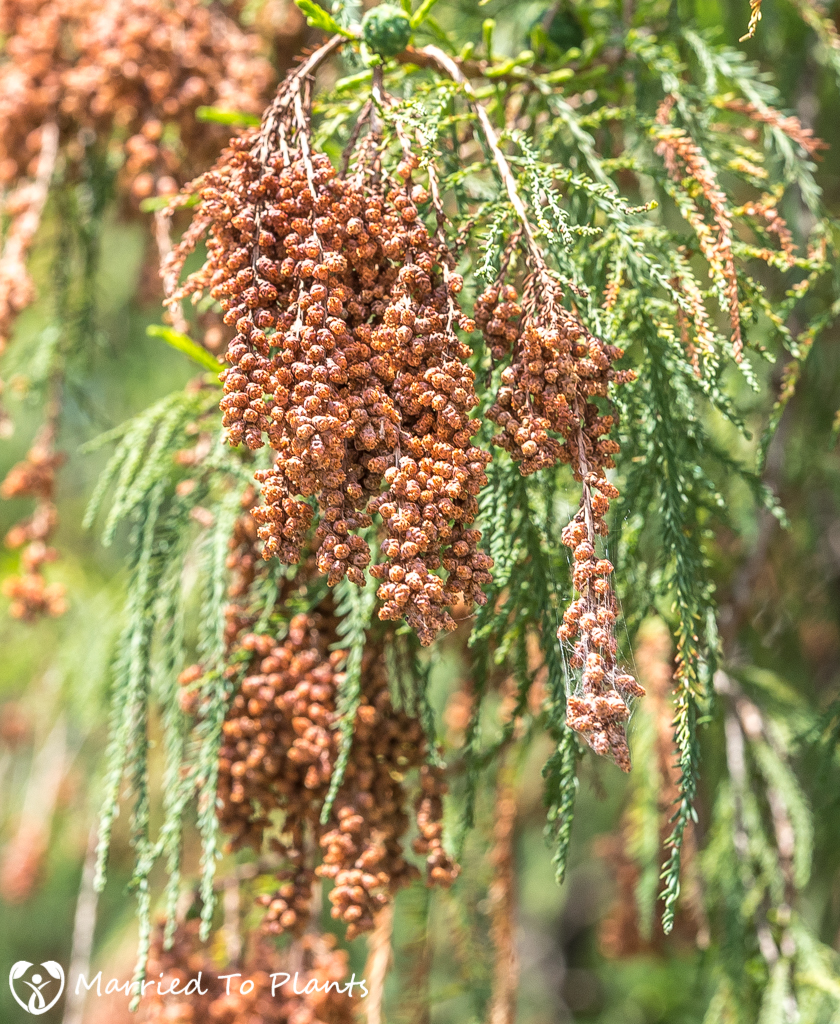 While you can stop by and see the tree for free from a distance, there is a 10 peso entry fee (about $0.50 in USD) to get close to the tree and also tour the 17th century church on the grounds. The small fee helps protect and maintain the area and gives you a chance to make out the animal figures I showed above. You will be close enough to maybe even spot one of the seven different species of birds that use the Árbol del Tule to nest in. As an additional bonus, you can also visit the sister tree to the Arbol del Tule that is found on the right hand side of the church. Just a baby at 1,000 years old—impressive nonetheless. 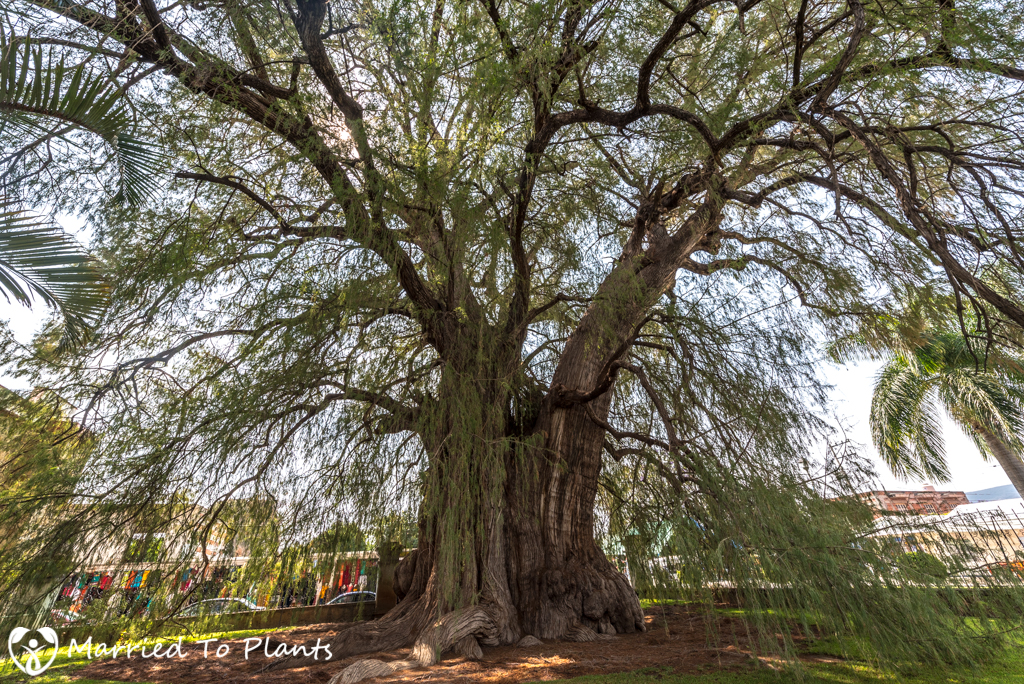 As far as record-setting trees go, yes you will find older living trees, you will find taller trees and you will find trees with a greater overall volume. But you won’t find any wider than the monumental Árbol del Tule. So monumental, in fact, that even my reluctant travel companions were in awe and glad I dragged them with me.