Here comes El Niño. And no, it is not this guy.

It is hard to believe that this Saturday Night Live skit featuring the hilarious Chris Farley was first shown almost 20 years ago. The year was 1997 and it marked the last time California felt the effects of a strong El Niño event.

Since that time we have had a few other smaller El Niño events. We have also been through a few false alarms of possible larger El Niños. Thanks to those false alarms, many Californians have adopted this “Yeah, I’ll believe it when I see it” approach to the latest warnings. Heck, even just last year some meteorologists were giving us warnings of a large event. Of course it never happened and people in our drought-stricken state were once again feeling let down. So it can be understandable why some people are reluctant to believe that this really could be the year of the biggest even since Chris Farley suited up for that skit. 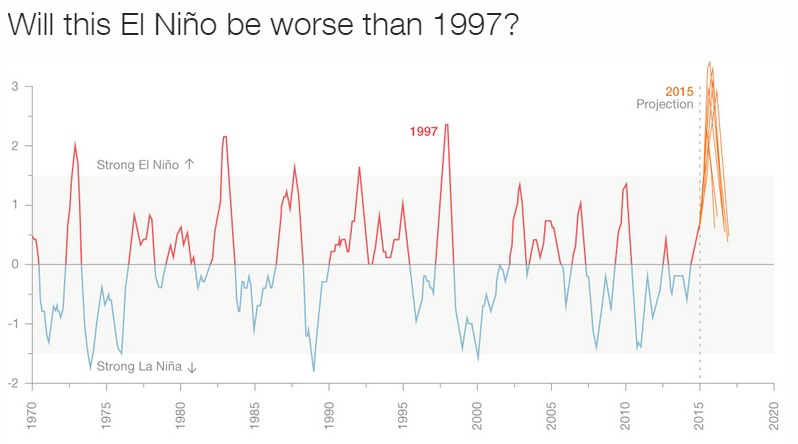 Coincidently enough, it was that winter of 1997 that I moved back to California. The promise of sun and mellow winters that I recalled as a boy were quickly crushed by constant rain and flooding. I certainly remember that 1997 event very well. I also recall some of the odd things that took place leading up to it. None of those things have happened together again until this year. Which is why this wannabe meteorologist with no credentials is backing real meteorologists and their conclusion that this coming 2015/2016 winter will have an El Niño larger than the 1997 event.

First off, we already know that El Niño is characterized by unusually warm ocean temperatures. And this year we are already recording temperatures anywhere from 2° – 4° degrees above normal. While that is impressive on its own, I find what is happening in the ocean to be more telling. Yellowfin and bluefin tuna have shown up earlier off San Diego and in great numbers. They are also closer to shore than anyone other than a longtime fisherman can remember. Hammerhead sharks have been spotted patrolling the waters off Dana Point. People have even caught marlin off the coast of Point Loma this year. Another anomaly is the coming on shore of the red tuna crabs in massive numbers. When was the last time tuna crabs appeared like this? You guessed it: 1997.

Second, the weather has been record-breaking and so unusual that only the summer/fall of 1997 could be compared. Certainly if there were any lingering doubters that it will be a big El Niño year, this week’s storm should have removed all doubt. Lindbergh Field recorded 1.21 inches of rain Tuesday. That storm gave us the wettest September 15 since 1906 and gave us the second wettest September day, falling 0.02 inches shy of the record 1.23 inches that fell on Sept. 30, 1921. To top it off, this one storm gave us the fourth wettest September on record.

Let’s also not forget about those July storms either. The 1.70 inches recorded in July is more rainfall than San Diego had seen in the previous 101 Julys combined! A total of 1.68 inches fell during July from 1914 through 2014 in San Diego. That is nuts. Stormy summer days like the one shown below are usually unheard of in San Diego. However, this summer it has happened a few times already.

The coming storm season will be big. Southern California will get a lot of rain. But don’t count on it busting this drought. The total amount of rainfall Los Angeles received during the last large El Niño was 27.06 inches. Depending on where you live in SoCal, the rainfall deficit in your area ranges from 12 to 24 inches below average since July 1, 2013. The most important factor will be how much snow our mountains get. I recently read something from NOAA claiming that it would take 2.5 to 3 times the average annual precipitation to make up for the snow lost in the central Sierra mountain range over the last four years. Depending on how warm these upcoming fall and winter storms are, the mountains might get snow but it could melt too soon and overflow our reservoirs. All that water would be wasted back into the ocean. Ideally we stay cold in the mountains so the snow melts slowly. Fingers crossed.

Unfortunately, the sad reality is that the drought will most likely continue. The days of watering your lawn anytime you felt like it will be no more. Conservation of water will become a regular way of life for us living in California. But let’s not fool ourselves, the fall and winter storms that are coming are going to bring a lot of water. So you better start preparing your garden now. Get erosion control down. Mulch, mulch, mulch! Clean out your rain gutters and irrigation drains. Get ready, here comes El Niño…