It was maybe six years ago that I received a few lava stone pots from Bali after a family trip. In two of those pots I place a Neoregelia ‘Ink Well,’ each with two pups growing from it. I always loved the color of Neoregelia ‘Ink Well,’ and because it is a bigger Neoregelia, I wouldn’t need to fill its cups with water as often as a smaller Neoregelia. The plants luxuriated in those pots and now six years later, that small grouping has grown into a large mass. 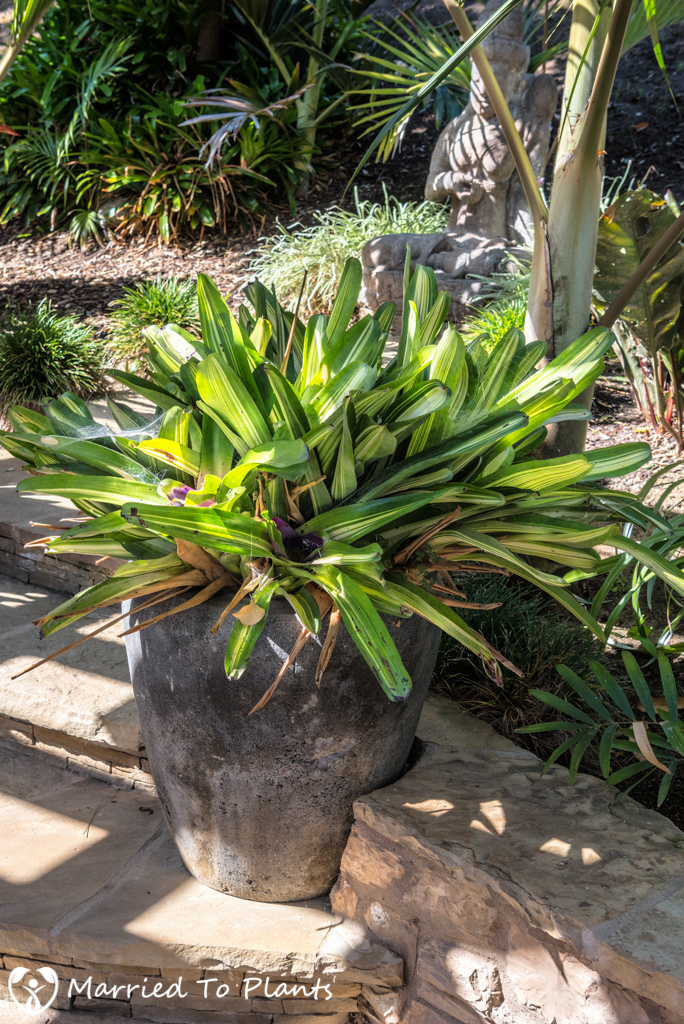 The two Balinese lava pots are in a prominent part of the yard where our outdoor dining table is, plus they border some stone steps to a Balinese statue. In a location like this I needed some nice plants that wouldn’t get too large, were easy to take care of (as they needed to be hand-watered), and that were not too showy as to distract from the main focal point – the statue. Neoregelia ‘Ink Well’ was a great plant for this. 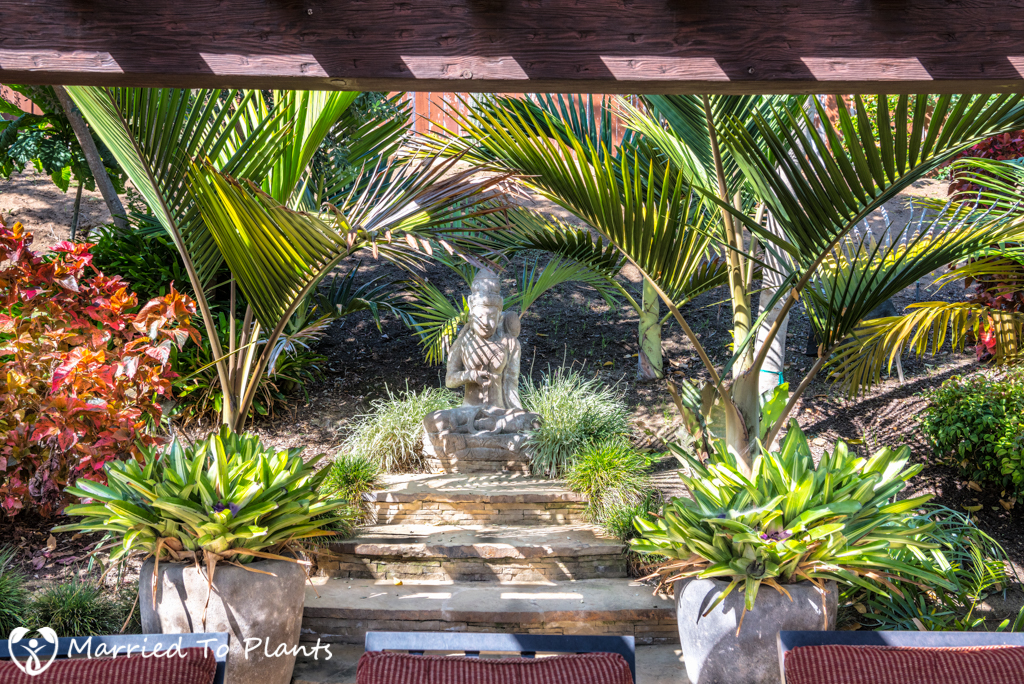 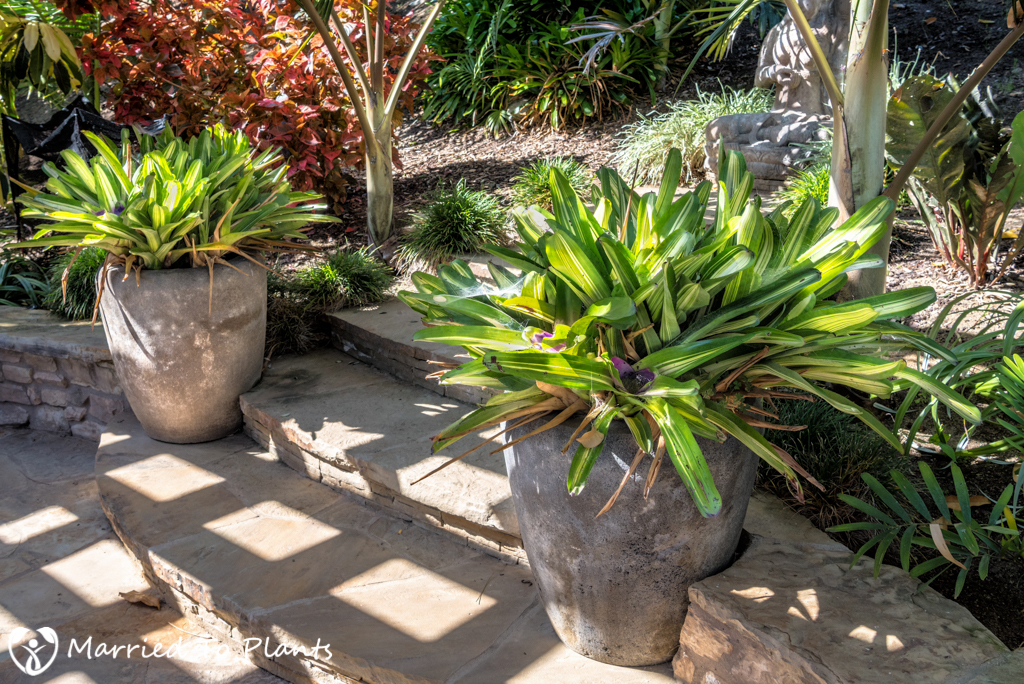 While Neoregelia ‘Ink Well’ served me well, it has some flaws. One, it isn’t as colorful as it is with more sun. The area where it is planted gets dappled sunlight. Two, it actually grows too fast. A new pup grows into a flowering plant in just one year. As you can see from the early photos, there are many plants in flower now or that have started to die from past flowerings. OK, I am reaching. Truth is I just want to try something new and was looking for reasons to make a change. So…out they go.

They actually popped out really easy. Once out I could get into those masses and remove some nice sized pups to propagate for other areas of the garden that get more sun.

Once removed, I added a bunch of crushed gravel, as there are no drain holes in these solid lava pots. 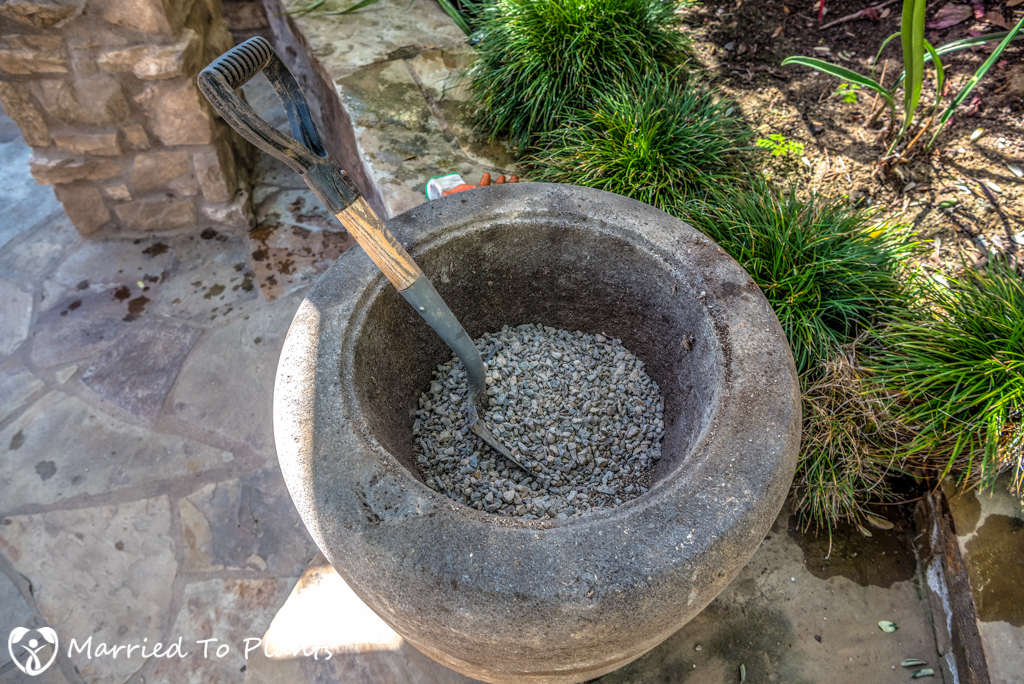 So what would make a good replacement? Last year I blogged about the purchase of some bromeliads off eBay. In that purchase were two Alcantarea odorata. Those two bromeliads have been sitting around in my “waiting to be planted someday” stash by the greenhouse. Here in California, Alcantarea odorata is a slow grower. So once planted in these pots, I should get quite a few years of enjoyment.

Not sure how I was feeling about the change at this stage. 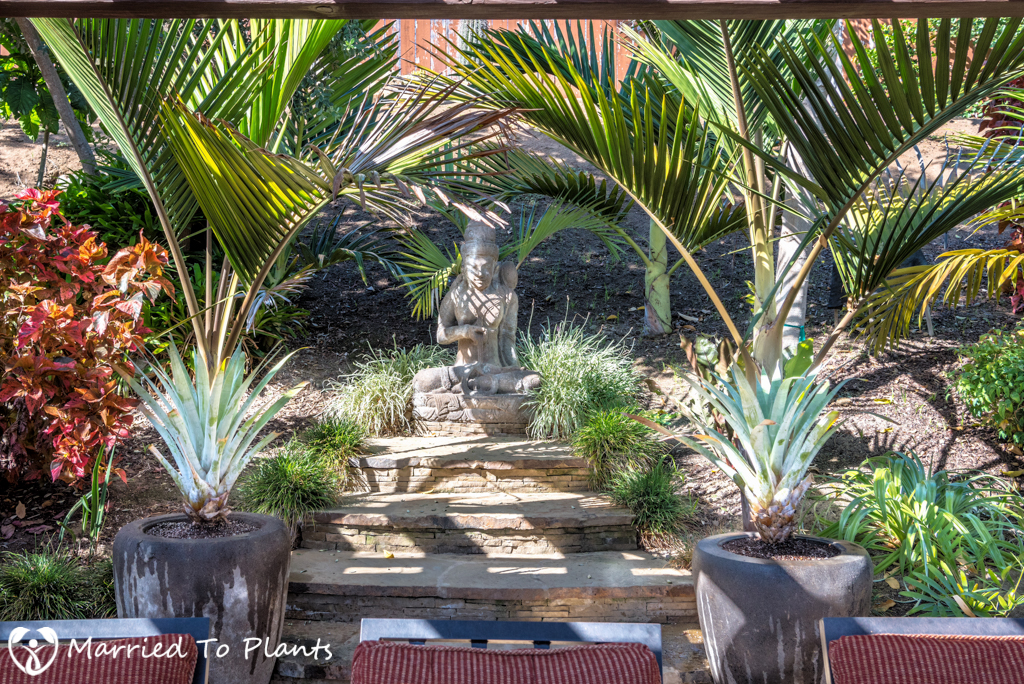 Many times in the past after I made changes in the garden I was a bit disappointed upon first look. However, once plants grow into their new location and show themselves in a way you envisioned,  that feeling of a successful “upgrade” sets in. Very seldom have I made a change and never ended up happy with it. I spend too much time thinking it through and painting a picture in my mind of what it will look like down the road for that to happen. Nothing is done willy-nilly. I know once my Alcantarea odorata fill out and develop those attractive powdery white leaves, all will be right in the lava pot world. In fact once I added the dull white pebble around the base and cleaned up, things were already looking much better. 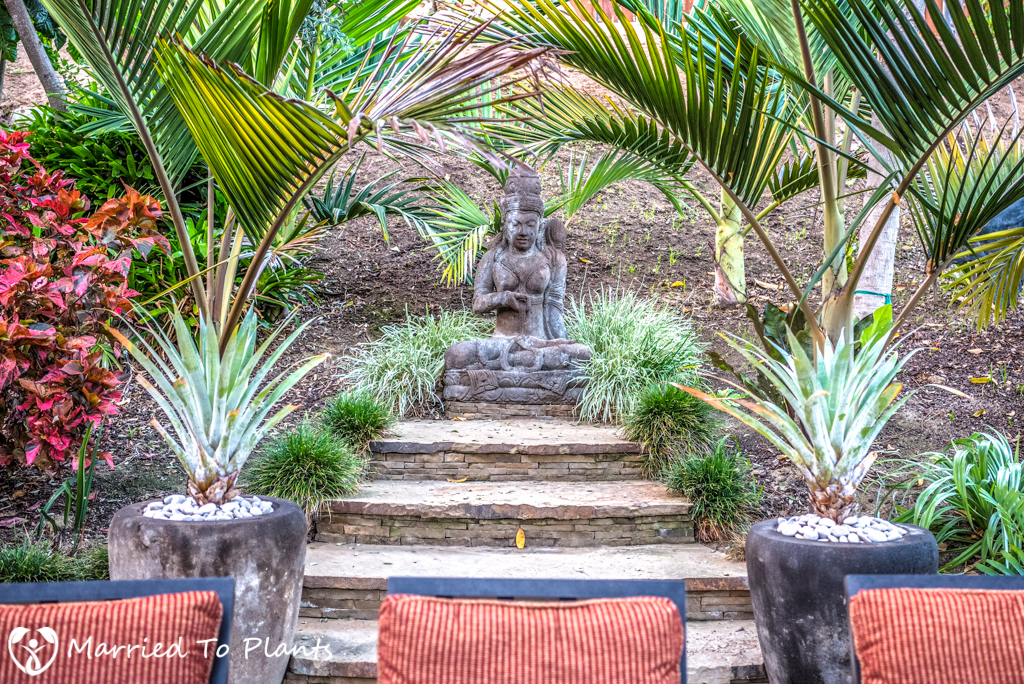 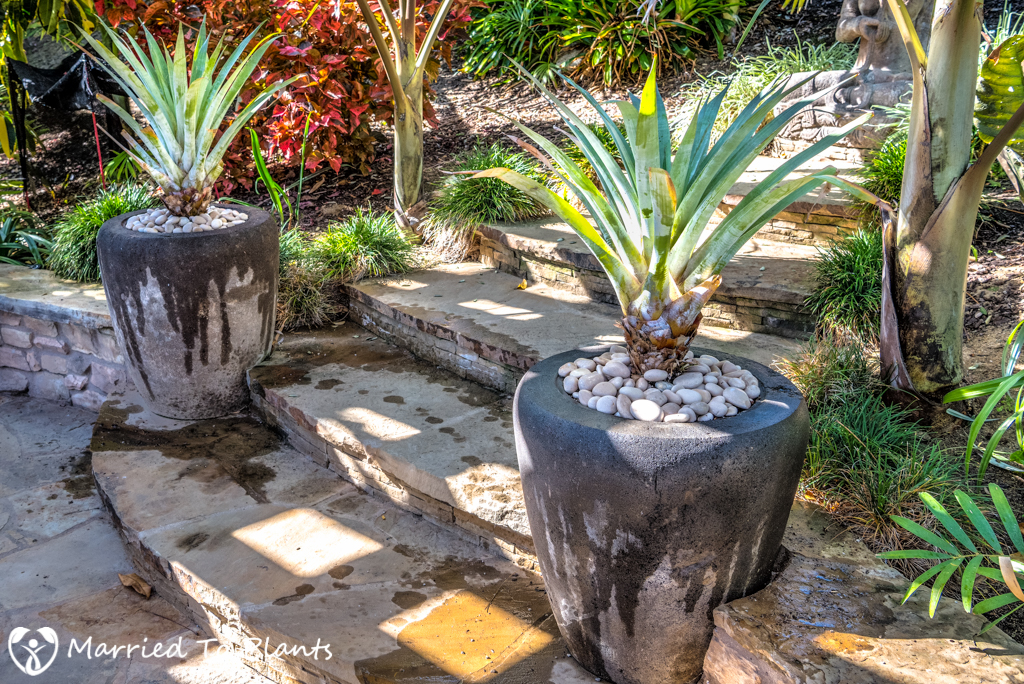 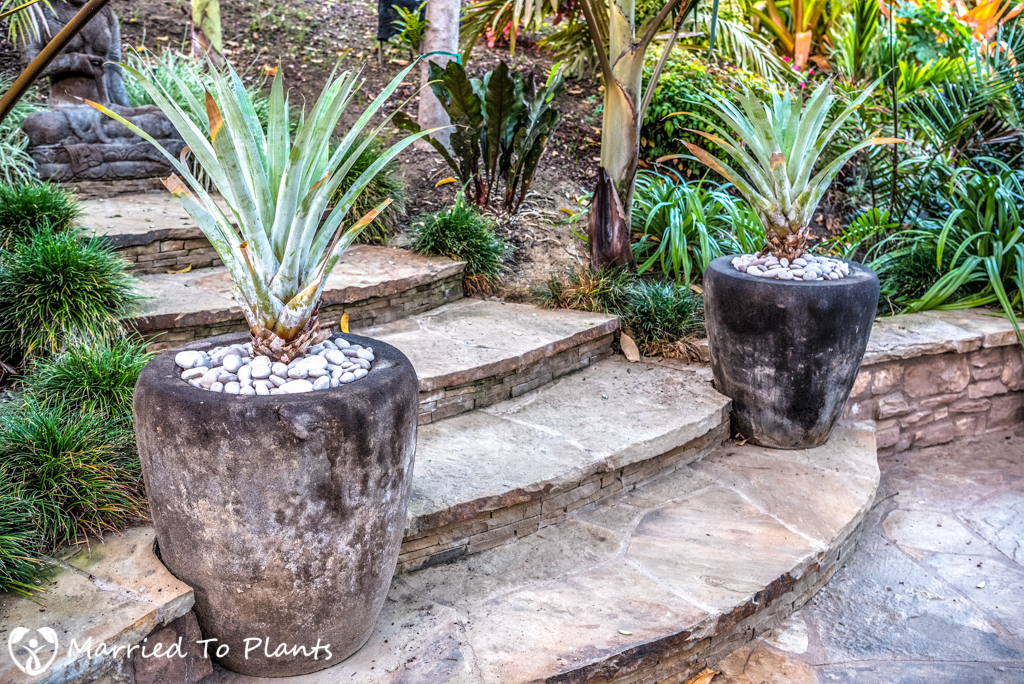 For those of you unfamiliar with what a well-grown Alcantarea odorata looks like, “search it up,” as my kids would say. It is a real stunner, and it will get big. So these lava stone pots will be well filled out in another year or two. The best part? Alcantarea odorata does not spread around by pupping. If I remove the hair pups it will grow around the base, I will be able to keep these as singles for years to come until someday a massive flower erupts out of the center.

As is usual with my post like this, I will return with an update later down the road to check how things turned out.