For palm collectors in California and other Mediterranean climates, Ravenea glauca has become a very popular palm tree over the last two decades. Some of the reasons for the popularity of Ravenea glauca stems from its overall hardiness in terms of cold tolerance, pest resistance and its ability to grow in many types of soil. Not only does it do well in full sun or mostly shade, it can also handle a lot of water in well-draining soil, while also being proven to be drought tolerant once established. Ravenea glauca is hardy enough to grow well in Northern California (like a few trunking specimens can prove), yet resistant enough to heat and dry winds to be found growing in the Inland Empire of Southern California. We must also not forget that it is a very attractive palm with a graceful, thick canopy of dark green leaves. While not a very fast palm, it can’t be considered slow either. I find that it grows at a great pace at which you will be able to enjoy it in your garden for many years, but also see it trunk over your head within your lifetime. When you take all this into consideration, it is easy to understand its rising popularity in cultivation.

For those growing Ravenea glauca in cultivation, it might come as a surprise that what you are growing is actually a different form of Ravenea glauca that, after further research, might prove to be an entirely different species. The type specimen came from a location about 200 kilometers east of where the now cultivated Ravenea glauca grows in Isalo National Park. That type specimen was collected by Joseph Marie Henry Alfred Perrier de la Bâthie on the western slopes of Andringitra at an elevation of 3,940–5,900 feet in 1921. The map below will give you an idea of where these two places are found in Madagascar. 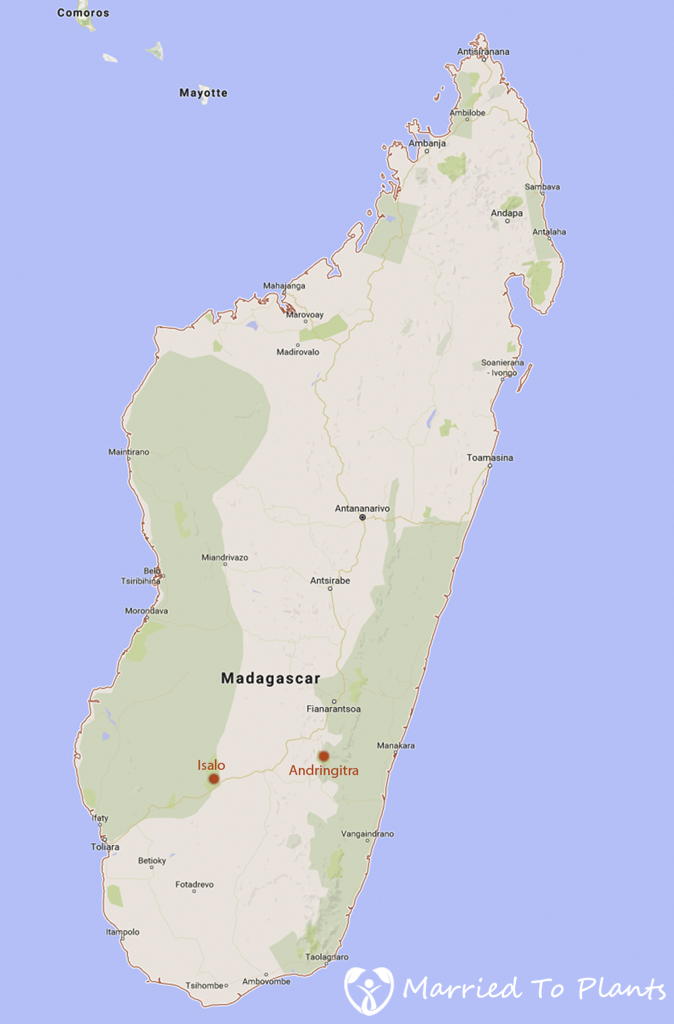 So let us first look at Isalo National Park, the habitat where the palm we grow in cultivation as Ravenea glauca comes from. Isalo National Park is the most popular park in Madagascar and is famous for its beautiful landscapes, which include sandstone hills eroded by wind and rain into unique landforms of varying shapes. The sandy valleys and narrow canyons of Isalo National Park also have a colorful composition thanks to the richness of iron and aluminum in the park. 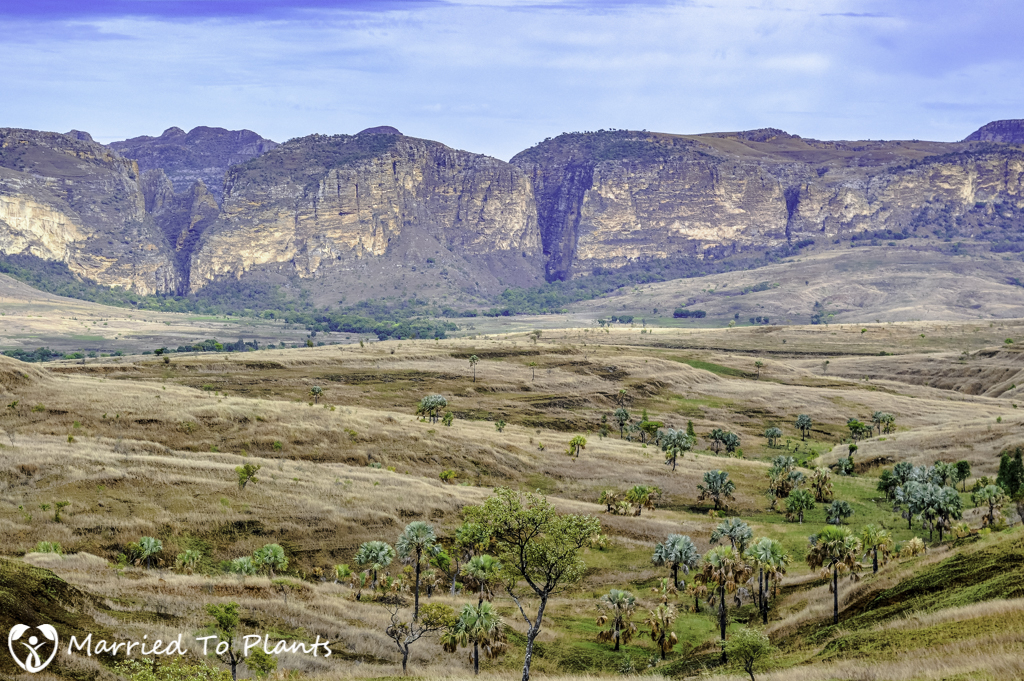 The climate of Isalo National Park is tropical dry, with an annual rainfall of 32-39 inches falling mostly during the months of December to March. The average daily highs range from 86°F in June to 92°F in March. These canyons where Ravenea glauca grows make for a nice reprieve from the year-round heat and humidity in Isalo National Park. While walking through the heat and humidity of Isalo, I would often wonder how this palm could fair so well in the cold and dry Southern California throws at it.

Below is Maki Canyon (Monkey Canyon), where most of the now iconic Internet photos of Ravenea glauca were taken. 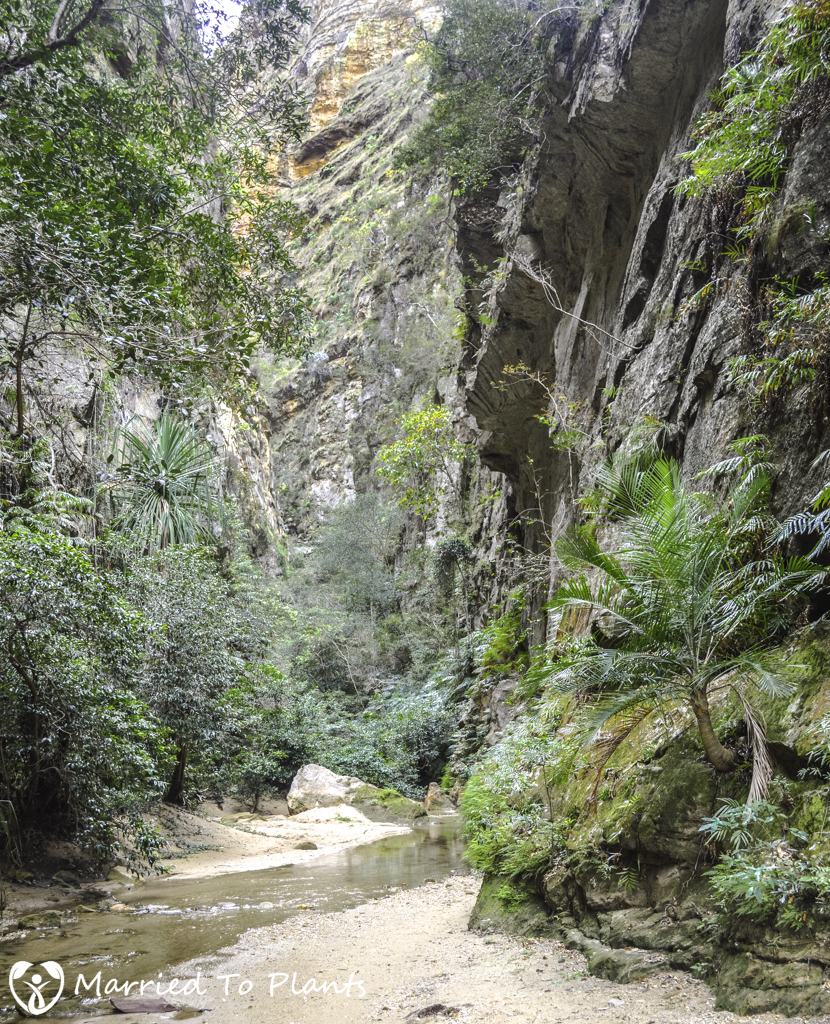 The Isalo Ravenea glauca have beautiful, graceful dark green leaves. The leaf is flat with no recurve to it and the leaflets usually hold on a flat or slightly arching plane. One thing you will pick up on in the photos is that the trunk of the Isalo Ravenea glauca is quite slender. Well-grown plants in cultivation do not share this in situ characteristic. 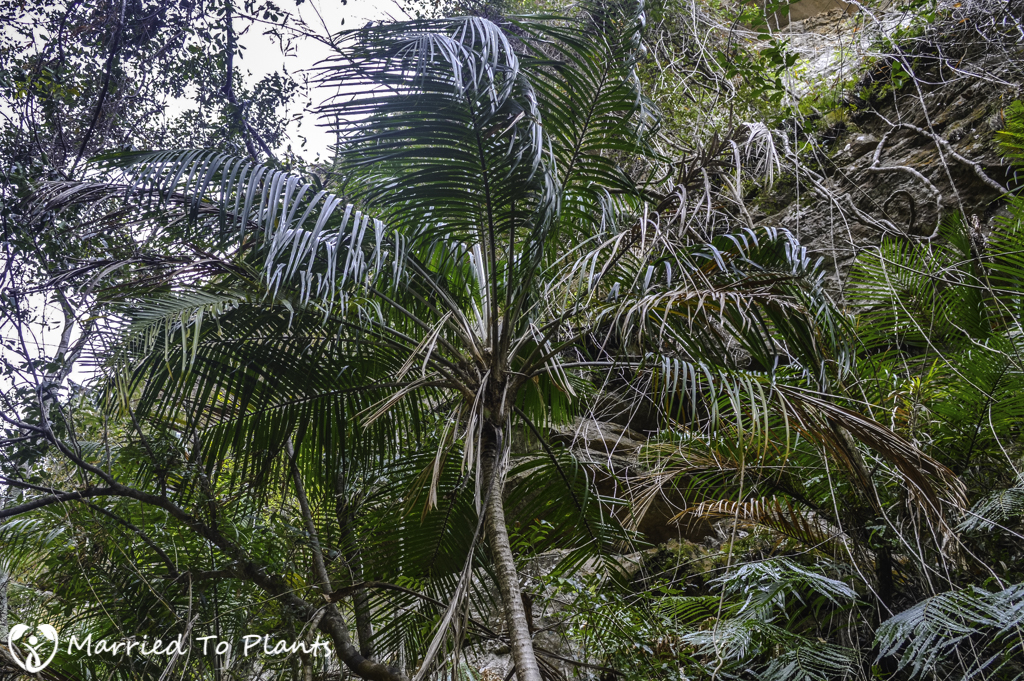 The Isalo Ravenea glauca is impressive for its ability to grow right along the cliff walls. A few I found in the canyons appeared to defy gravity. If you look closely at the two photos below, you will see another palm that can be found growing in the canyons – Dypsis onilahensis. 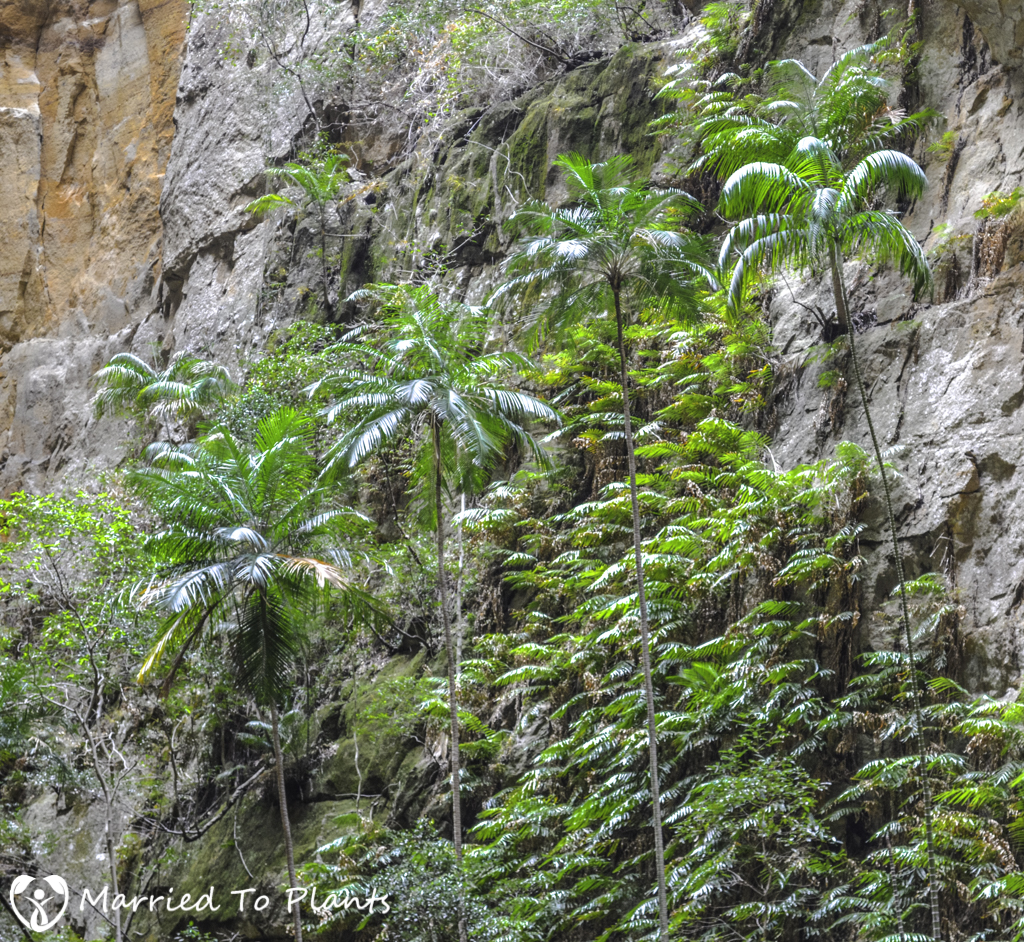 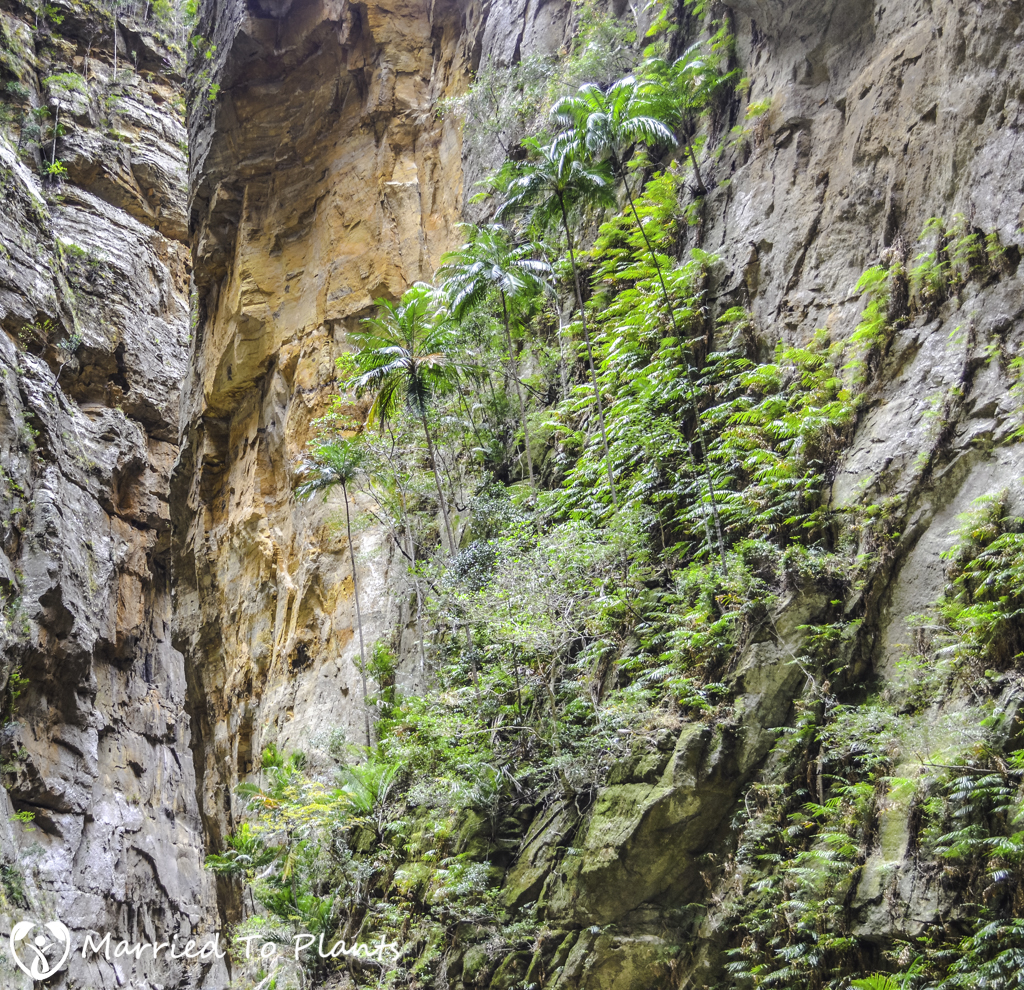 Sometimes they just can’t hang on and fall over. However, that doesn’t stop them from continuing to grow. 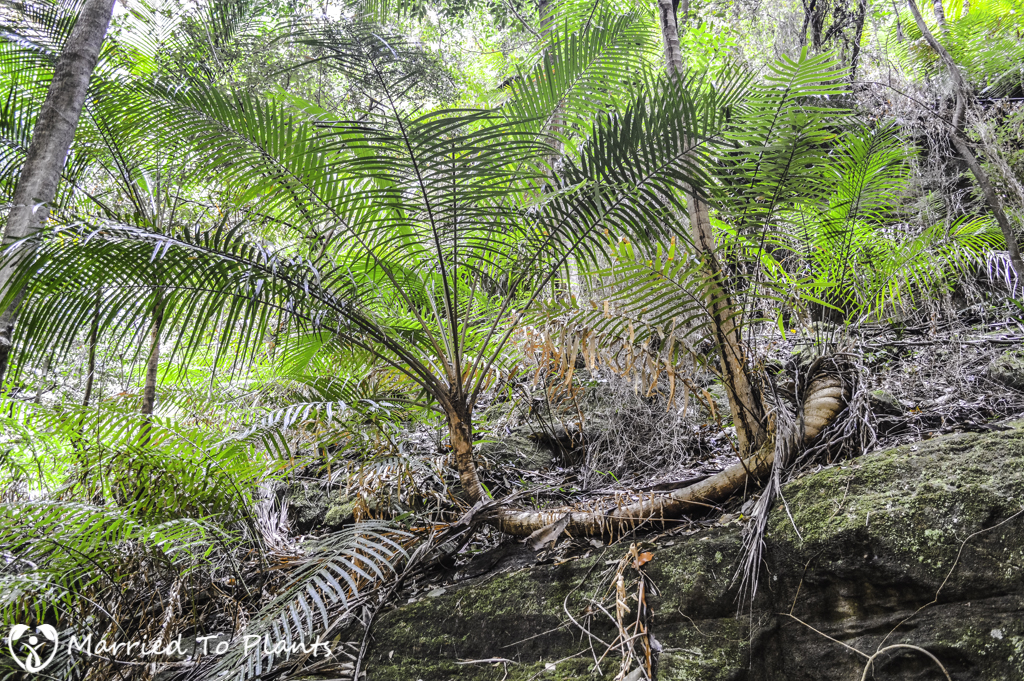 Now let us look at the type locality of Ravenea glauca from Andringitra National Park. What makes Andringitra so much different than Isalo is that it is characterized by multiple climate zones and tall mountains. This includes Pic Boby, which, at 8,720 feet, is Madagascar’s highest accessible peak. Don’t expect to see the Rocky Mountains in Madagascar, however. The mountains here are really just large granite outcrops dating back to the Precambrian period. Millions of years of weathering have created a great variety of geomorphological features that have been sculpted into natural works of art. Andringitra is made up of a few vegetation zones. A montane prairie called the Andohariana plateau splits the humid rainforests of the east and the dry forest/savannah to the west. Past the upper montane forest to the top of the granite massif of Andringitra where very little vegetation can be found, snow has fallen. Extreme lows of 18 °F have been recorded up top.

To get an idea of the overall geography of the area, below you can see the dry forest and savannah rising up from about 5,200 feet to the granite massif of the Andringitra mountains. Out of sight, about two-thirds of the way up the photo, is where the Andohariana plateau would be found. Just below the foot of the granite massif. All the palms in the photo are Ravenea glauca and from the type locality. 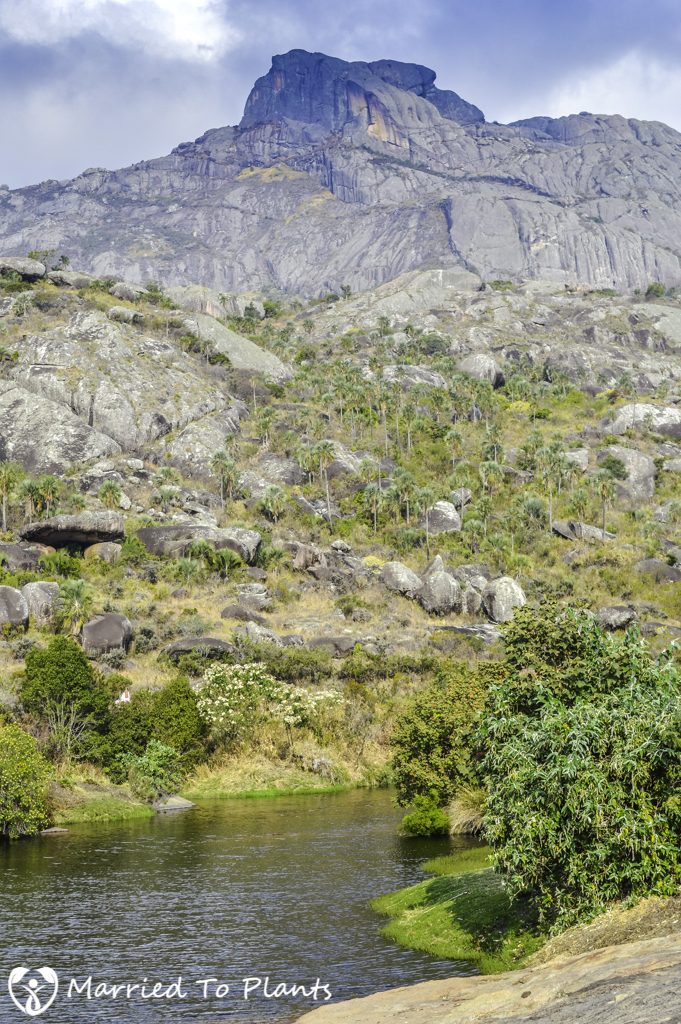 Coming down from Pic Boby, just descending off the Andohariana plateau and into the dry savannah, you can find Ravenea glauca in Andringitra National Park for the first time. It was at an elevation of 6,350 feet (1,950 meters) that I would see my first Ravenea glauca just off the trail. You can see from my jacket that it was rather cool and windy at that elevation. 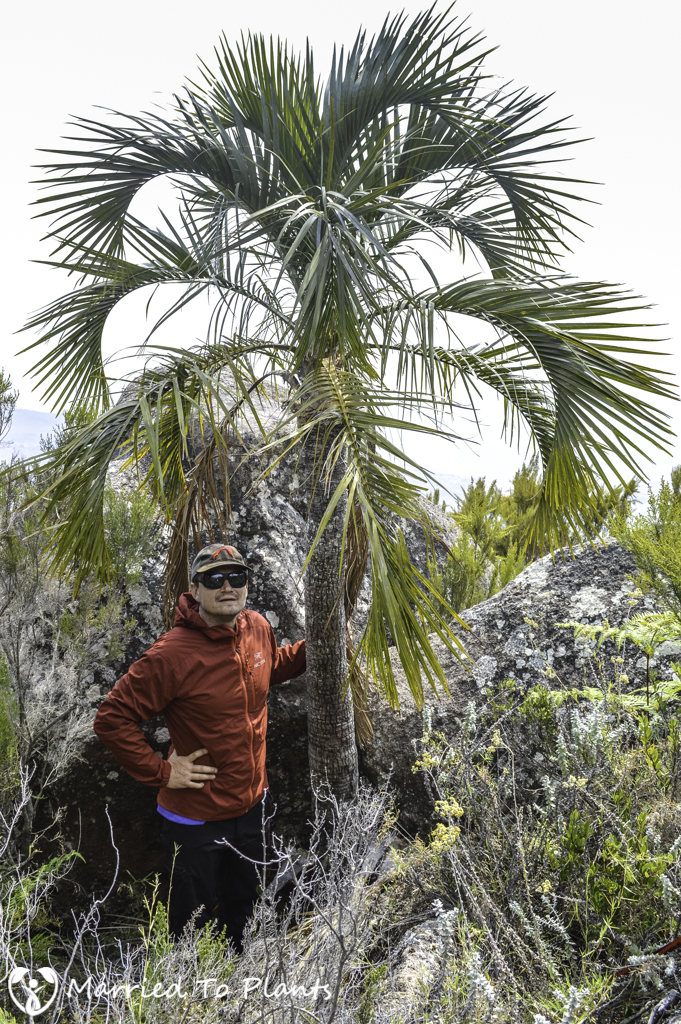 When you are looking at the Isalo Ravenea glauca, you wonder where the glaucous coloration is that gives it the “glauca” name. The leaves are dark green on both the adaxial (top) and abaxial (bottom) surfaces. It is when you see the Andringitra Ravenea glauca that you understand how the palm was given the moniker “glauca.” Looking out over the terrain, it was Ravenea glauca as far as the eye could see, with their stiff, glaucous leaves just blowing in the wind. Such a contrast from what you see in Isalo National Park. Here in Andringitra, they could almost be confused for Butia. 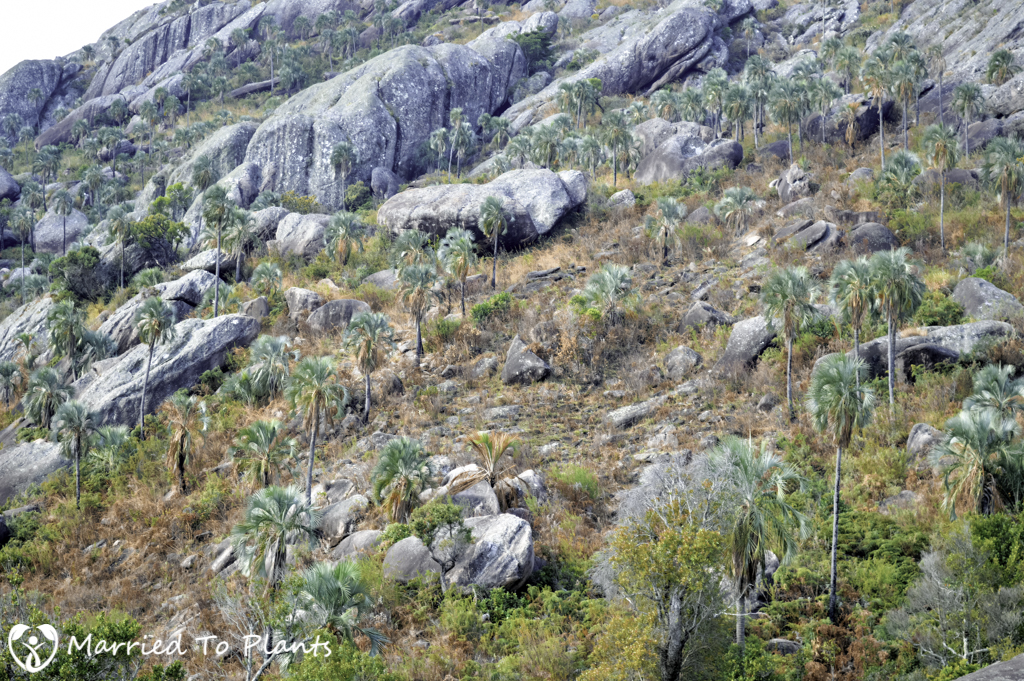 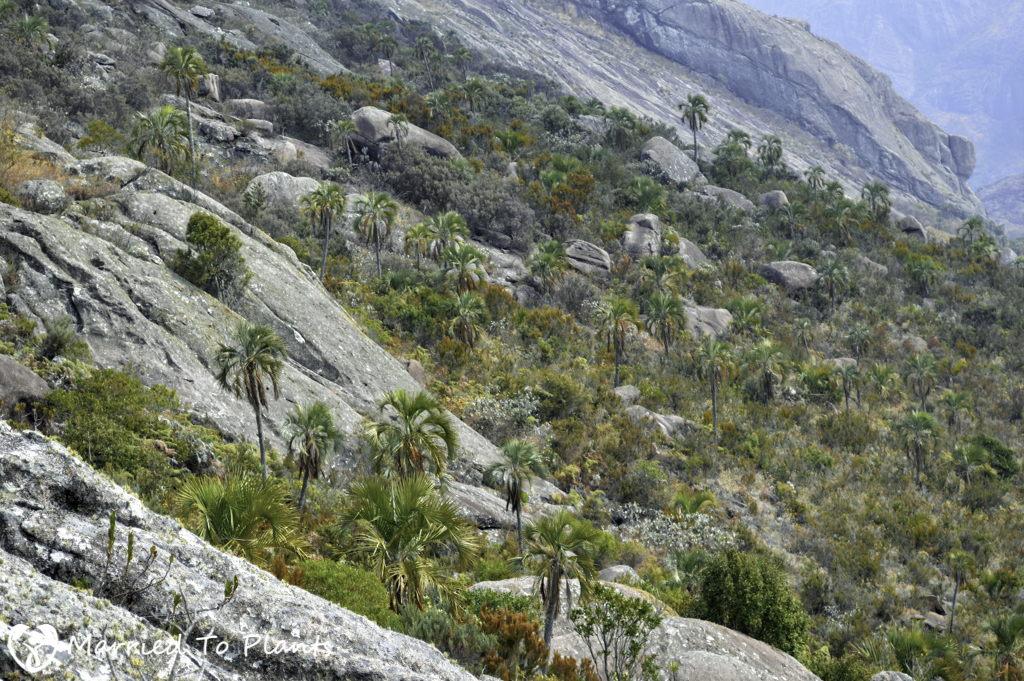 Looking closer at these Andringitra Ravenea glauca, you can see they really look nothing like the ones found in Isalo. To start with, the trunks are much thicker. This is most likely from the harsher environment and, judging by the growth rings, much slower growth rate. Most obvious are the leaves, as they are almost the complete opposite of what you find in the Isalo palms. In Andringitra you have a leaf that is keeled, recurved with leaflets held erect. The abaxial side of the leaf is always glaucous and the adaxial side, depending on the plant, could be green or even a whitish blue like this amazing specimen below was displaying. 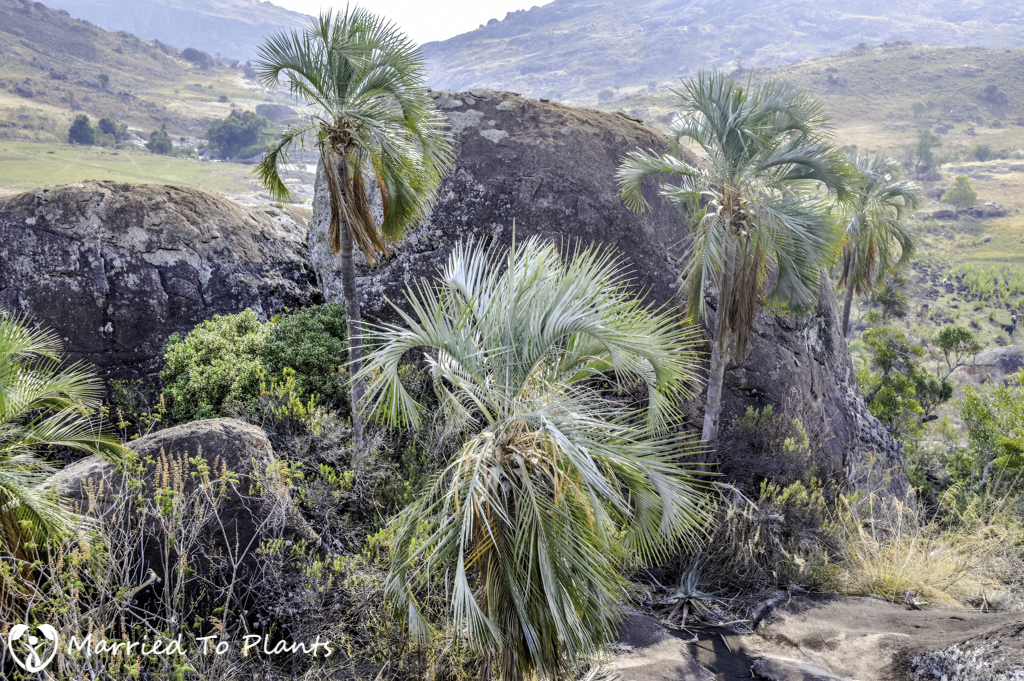 You find out at the seedling stage just how different the two palms are. The Isalo form (left) goes pinnate after the first or second leaf, while the Andringitra form (right) holds bifid leaves much longer. 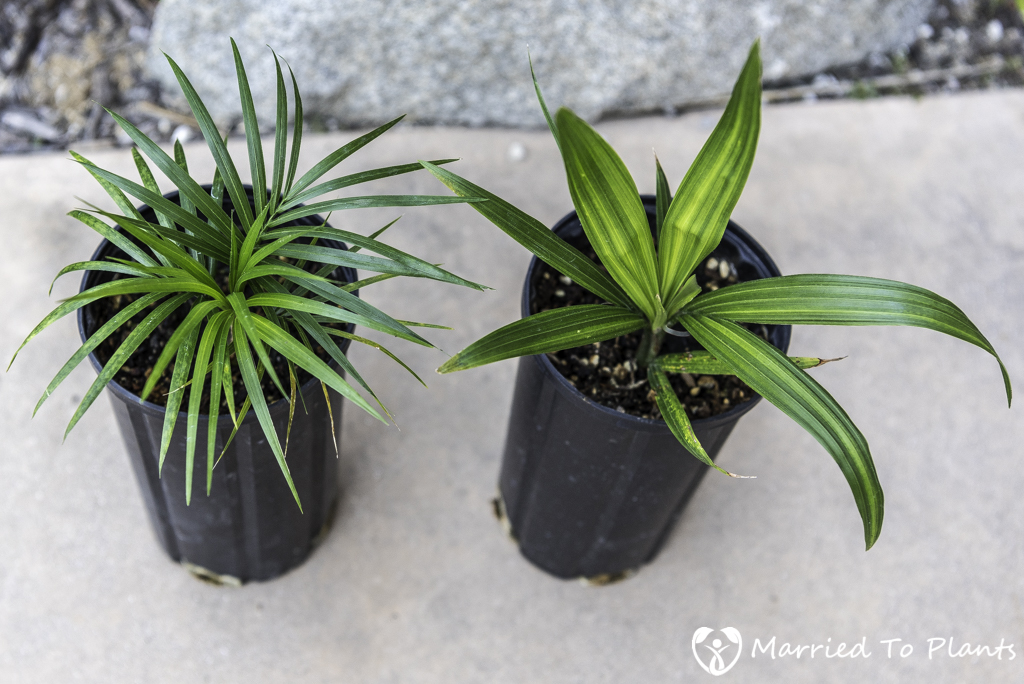 The two forms do share a few characteristics. One being the heavily tomentosed leaf bases and bottom of the petioles. The palms in Andringitra, like shown below, have a more white tomentum, while the Isalo palms are covered in a brownish tomentum. 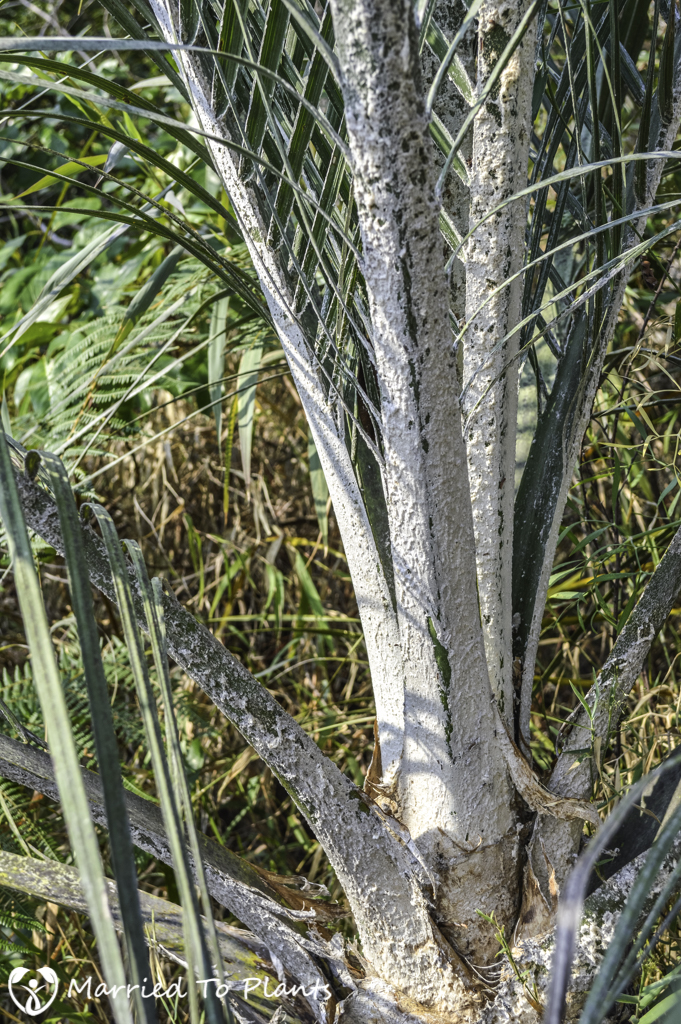 Another characteristic they share is a large tap-like root at the seedling stage. 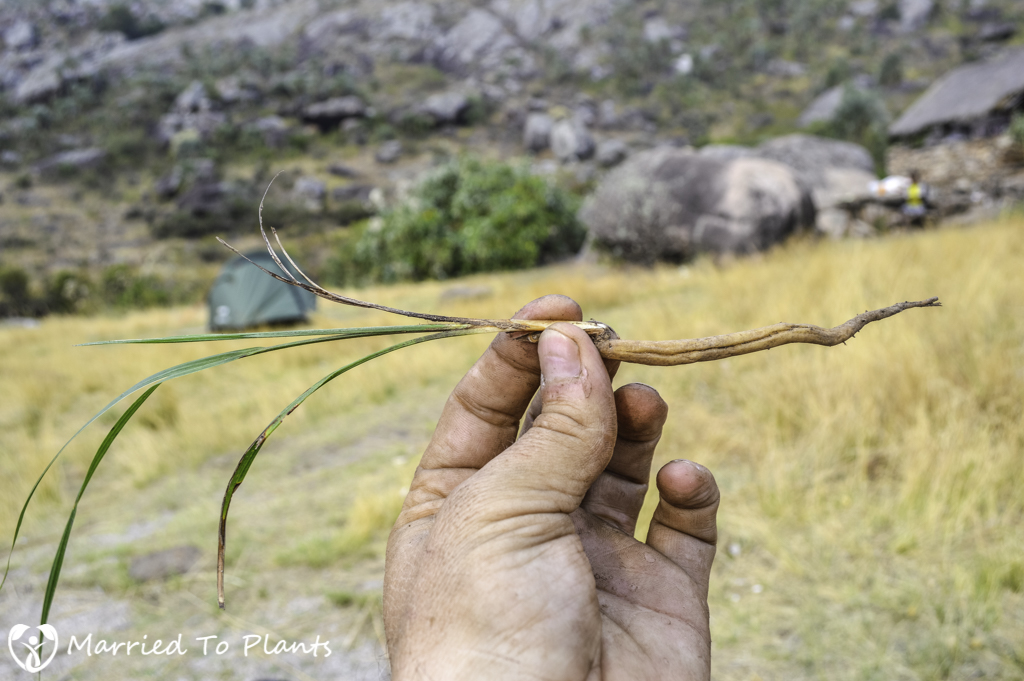 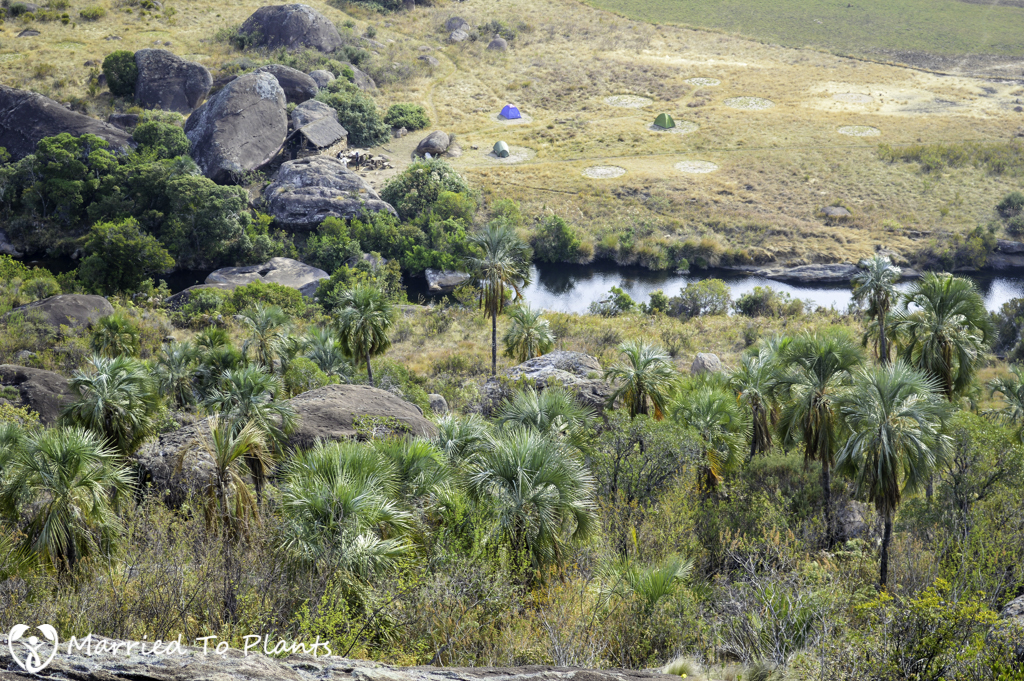 For any palm lover looking to venture to Madagascar but who won’t have time to visit both Ravenea glauca locales, here is what you can find palm tree-wise at each national park to help you make a decision on which to visit. Around Isalo National Park you can admire Ravenea glauca, Ravenea rivularis, Bismarckia nobilis, Hyphaene coriacea, plus both the droopy form and stiff-leaf form of Dypsis onilahensis. While Andringitra National Park is one of the most biologically diverse and endemic places in all of Madagascar, sadly it is limited in terms of palms. You will only be able to see Ravenea glauca and Dypsis albofarinosa. As a plant-lover, if I had to choose I would go to Andringitra National Park. However, it does take a great deal more effort in terms of travel and hiking.

This concludes the tale of the two habitats of Ravenea glauca. Sadly, to the best of my knowledge, the type locality of Ravenea glauca from Andringitra National Park is not in cultivation yet. If I were to hazard a guess, I think it could end up becoming the most cold-tolerant palm out of Madagascar. So hopefully seed makes it into collections someday.

If you want to read more about the Andringitra Ravenea glauca, the International Palm Society had a great article in their journal. Click here to read it.