This week’s and next week’s blog post are going to be a bit different for me. Some might find them a little too content heavy and scientific. So I will just warn you now. A while back I was asked to write an article for the Palm Society of Southern California’s quarterly journal. A fellow palm lover and I decided to write about and share our experiences with the de-lidding of Clinosperma macrocarpa seed and the proceeding cultivation of the seedlings. Sadly, an unscrupulous treasurer robbed the PSSC coffers, leaving them broke. So the journal is on hold for quite some time. Rather than sit on this article, I decided to use my blog to get the information out there, as it could prove invaluable to others in helping preserve this exceedingly rare palm before it is too late.

The article was to go as follows:

For anyone that loves New Caledonian plants, you will remember an incredible run that lasted about two years wherein a bunch of super rare palms and plant seed became available on RarePalmSeeds.com. It seemed that every few months something new would pop up, so for a guy like me it was Christmas every time I visited the website. One such offering came in the form of Lavoixia macrocarpa (Clinosperma macrocarpa is the current nomenclature). This, of course, is one of the true Holy Grail palms in the plant world and it had never been available to collectors before. But at close to $50/seed it wasn’t going to sell out fast. Even if it was extremely rare.

So what is Clinosperma macrocarpa? Clinosperma macrocarpa is one of the rarest palm trees in the world and is found only on Mt. Panie in New Caledonia. It was discovered in the late 1960s and described as a species in 1978. The palm has three main characteristics that make it unique with regards to other New Caledonian palms. 1) It has an abruptly flared base of the stem. 2) Its leaf sheath is covered with black scaly indument that almost gives it the appearance of a beard. 3) It has large fruits and a seed like no other in the palm world. According to Palms of New Caledonia, there are only abut 30 adult palms left in the world. The palm is listed as critically endangered on the IUCN Red List and is in real danger of extinction. So getting this palm to grow outside New Caledonia would be an amazing accomplishment towards its conservation. Currently you can count on one hand the amount of locations this palm tree is growing in the ground outside New Caledonia.

The reality for me was that the cost of the seed was much less a determining factor than the difficulty in germination, for which this seed was notorious. However, soon after the seed was made available a thread started on PalmTalk.org that showed how the seed could be de-lidded (Matt explains below) to speed up germination and increase your success rates. Unfortunately for the poster, all his plants ended up dying. However, it was my belief and hope that this was not due to plant difficulty but rather incorrect cultivation practices.

Knowing I didn’t want to enjoy the process alone and knowing I needed a more patient and skilled eye than I could provide, I decided to enlist the help of my friend Matt Patricelli. So by November 2011 I had decided to pull the trigger and order 20 seed. That batch of seed turned out to be no good, as the embryos were watery. This definitely caused some panic, but in hindsight it gave Matt twenty test subjects on which to practice. After a few months of hounding Toby at Rare Palm Seeds, he agreed to send 20 replacement seeds from a second batch. So by March 2012, the seed had arrived, and was ready to met up with Matt to start the process again. 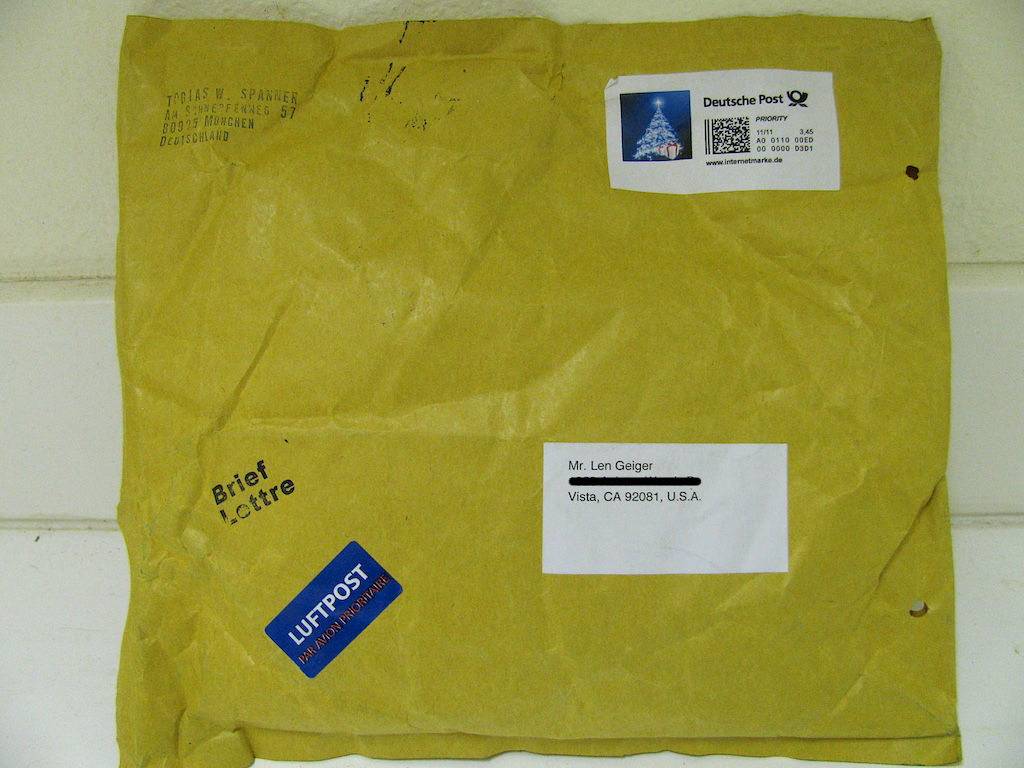 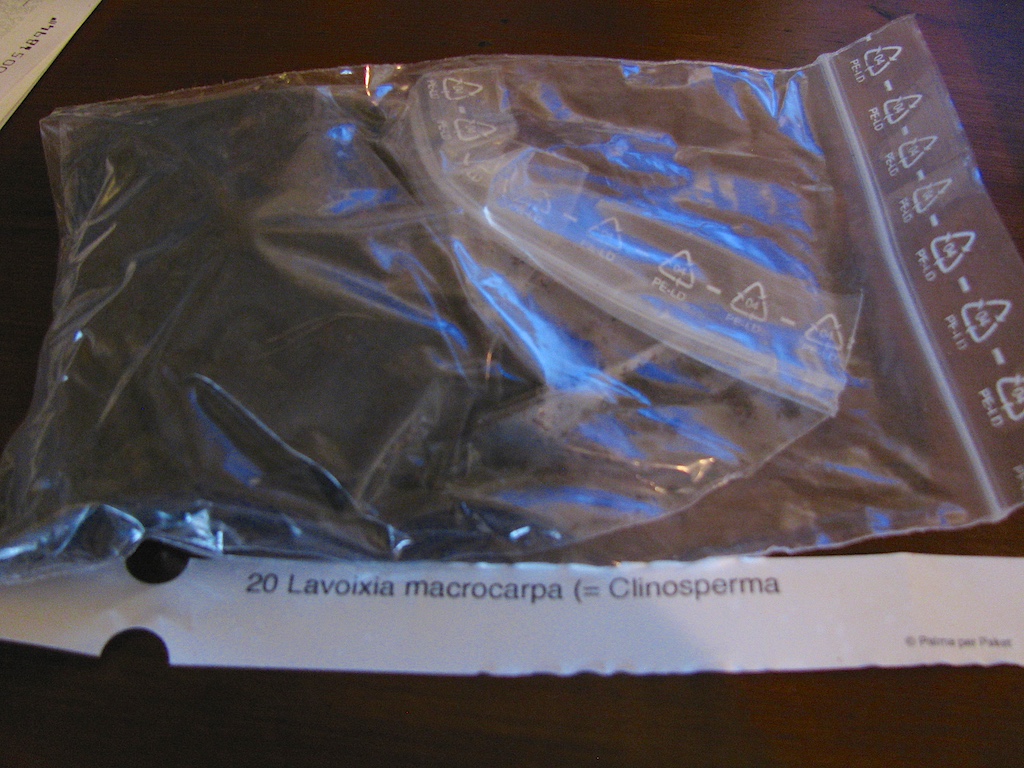 NOTE: The following was written by Matt Patricelli:

While I’m not a big risk taker when it comes to spending big money on small palms or seeds, I’m always up for a challenge. So the partnership with Len to germinate Lavoixia macrocarpa—a palm that, according to the PACSOA website, had never been successfully germinated—was a great setup. I had been experimenting with “de-lidding” seeds for a year or so and was starting to get pretty good at it, while Len had been perfecting the New Caledonian palm seedling culture over many years of sometimes painful trial and error.

To be fair, just prior to our adventure with Lavoixia we were greatly encouraged by reports on Palmtalk by “John in Andalucia,” who had used the “de-lidding” technique on 4 Lavoixia seeds given to him by Toby Spanner (Rarepalmseeds.com), and had successfully germinated two. This was really the inspiration for my trials with “de-lidding” in general, and as John described, the method is very effective. Unfortunately, John did not have a nearby friend who had mastered the fine art of keeping these suicidal New Caledonian seedlings alive through the first few leaves of growth. I believe his seedlings died over the year or two after germination.

I had become pretty efficient at de-lidding, even doing it with my fingernail a couple times on cheaper seeds. But I have to say that I was very nervous and very careful with these seeds! I wore gloves, wiped down countertops and tools with bleach, and started the process:

I placed about 2 ½” of potting media into several canning jars. Any well-draining media will work, but if the seeds are important/expensive, make sure you’ve kept the media in a sealed container beforehand without it molding (some mixes will grow mold). I then added water until about ½” of standing water could be seen at the bottom of the mix and microwaved the jars for 10 minutes (without the lids). The lids were wiped with bleach and put loosely onto the jars as they cooled. This needed to be done about 30 minutes before de-lidding the seeds so the media was not too hot when the seeds were placed in.

One of the most critical aspects of de-lidding is knowing where the embryo will be based by observing the surface of the seed. This can only be learned by experience and trial and error (cutting open seeds). Luckily, I had de-lidded some Clinosperma lanuginosa (same genus now) seed previously, so I had a good idea where to look and did not ruin any seeds by cutting in the wrong spot. The seeds have a protrusion like a horn on one end and the embryo is located on a relatively flat area at the base of the horn (as seen below marked with arrow). 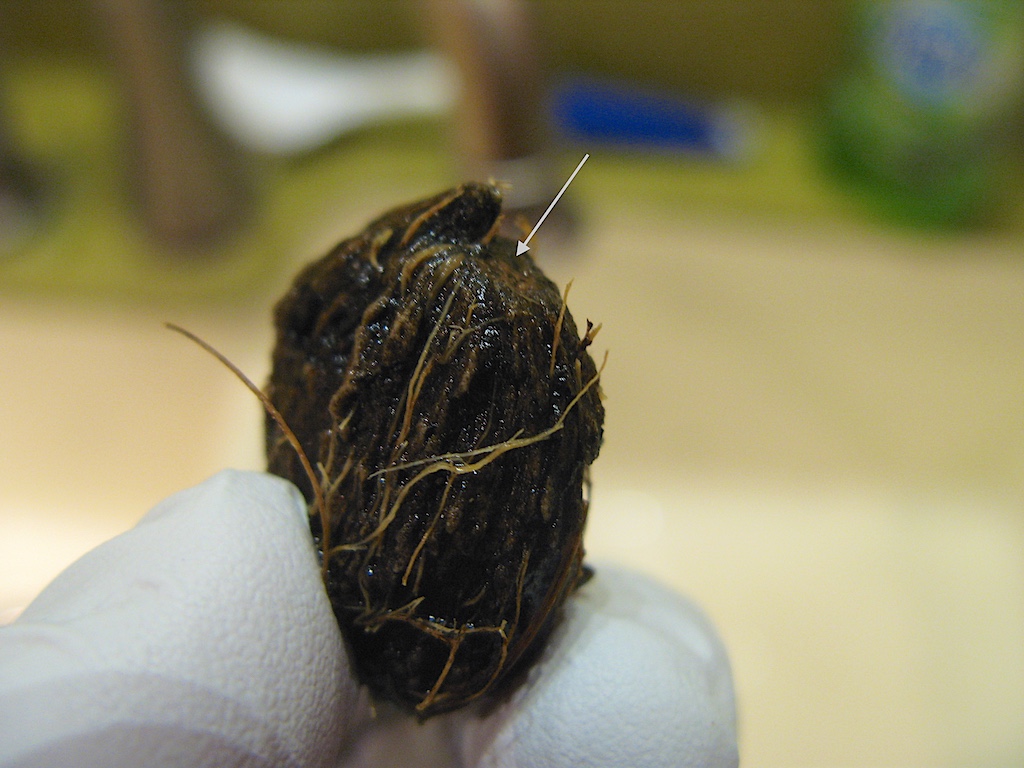 I removed the material over the “lid” very carefully and gradually with a razor knife. On some seeds, the “lid” over the embryo is exposed and needs only to be lifted off, while on many seeds there is a thin layer of seed coat over the lid. Lavoixia are very unusual in that they have a very thick layer (1/8” or so) of hard, woody material over the embryo. I believe this is one of the reasons they are so difficult to germinate. Under this woody material was a dome-shaped, smooth and brittle material like an eggshell (marked with circle). 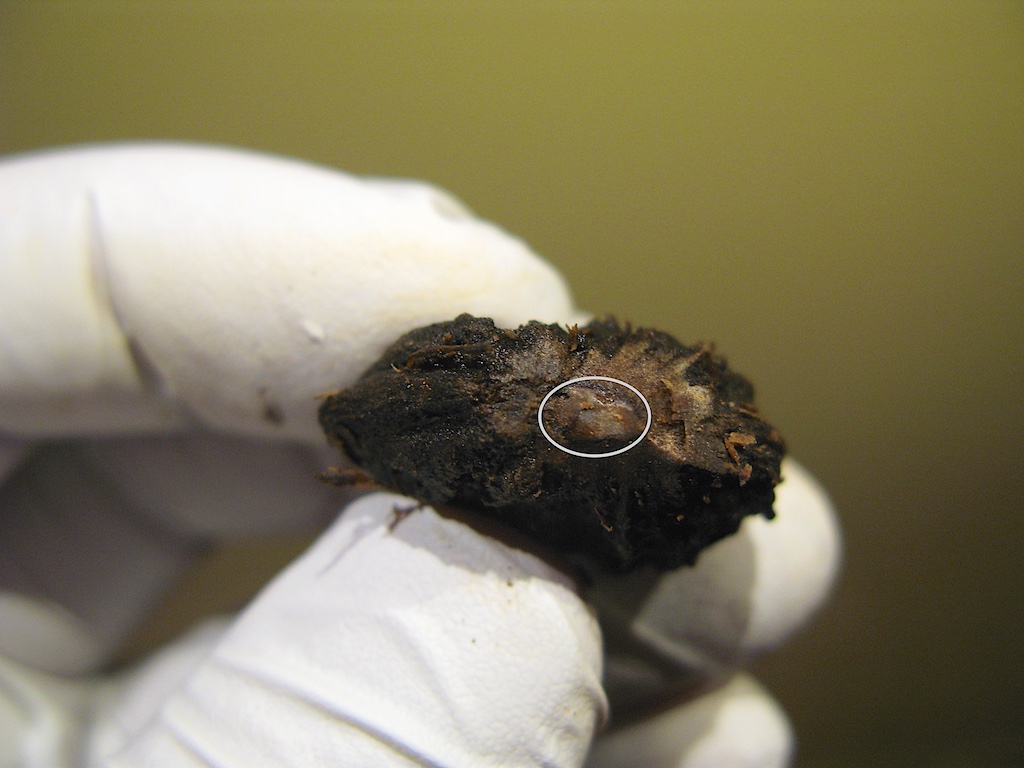 I believe this was the “lid”; however, it was not quite like any other seed I had seen. On most seeds, the “lid” is just like a lid, with clear boundaries, and it can be lifted off by prying from an edge. For the Lavoixia, the lid was instead cracked/removed by taking a steeper angle with the razor knife, being careful not to cut into what is underneath.

This was the point where I had the biggest surprise of the process…on one seed, under the lid, there was a microscopic bug that was alive and crawling. The seeds had been soaked in bleach, and this bug was not seen until the lid was cracked and removed. I can only assume that it was living in the space between the lid and the embryo. It was very small, only visible with the microscope, but was clearly alive. The seed with the bug had a nice looking embryo though, so the bug did not seem to have done any damage. There must be an interesting story behind how these bugs get inside the seeds.

Underneath the lid was yet another challenge. The embryo was covered by a dark, leathery sheet.

This material was in full contact with the embryo underneath, and was extremely challenging to remove without cutting into the embryo itself. Luckily, my son had a dissecting microscope…the final step would have been impossible without it. After careful inspection of the leathery layer under the microscope, a small dimple that coincides with the center of the embryo could be seen. And with some practice, the distance from this point to the edge of the embryo could be estimated pretty well. I carefully inserted the tip of the razor knife into this material where the edge of the embryo would be, I cut a short arc, and then lifted it off, trimming as needed. This absolutely required a microscope, as the razor had to be inserted far enough to get through the cover—all without cutting into the embryo (I would estimate the cover to be about as thick as a sheet of construction paper). This step was very tricky, and in many cases I lightly nicked the embryo surface; however, this did not seem to prevent germination. Also, exposing some endocarp around the edges of the embryo did not seem to be a major problem. That being said, I do believe that too much damage on the embryo surface causes issues with growth later on, and exposing endocarp does increase the risk of rotting.

At this point the embryo was exposed. 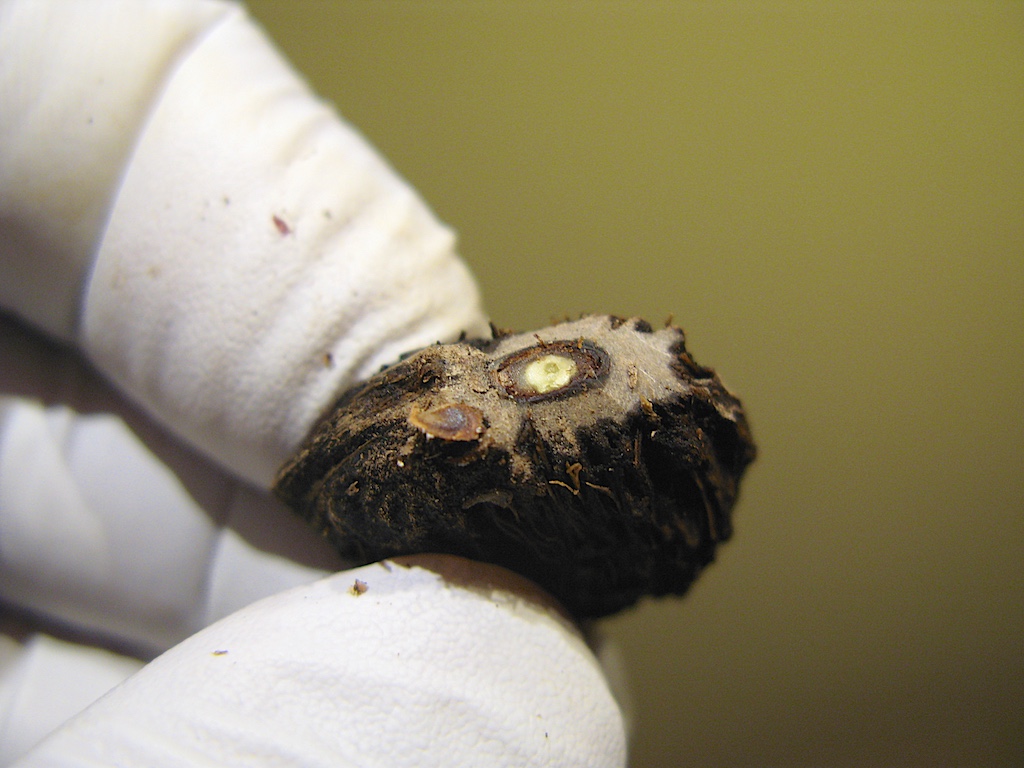 All that was left to do was re-sterilize the seed and put it into a canning jar. Probably the most important trick I learned from previous de-lidding trials was that a 10% bleach solution does not damage the exposed embryo. Soaking in bleach at this stage dramatically reduces mold and rotting—it’s really critical. The de-lidded seeds were soaked in bleach for about 1 minute and then placed in a jar. Once several seeds were in one jar, I sealed the lid.

Probably the most exciting thing about de-lidding seeds is that growth starts immediately. Typically, the embryo will begin to protrude from the seed visibly within 24 hours. Within two weeks growth was very obvious, as seen below. 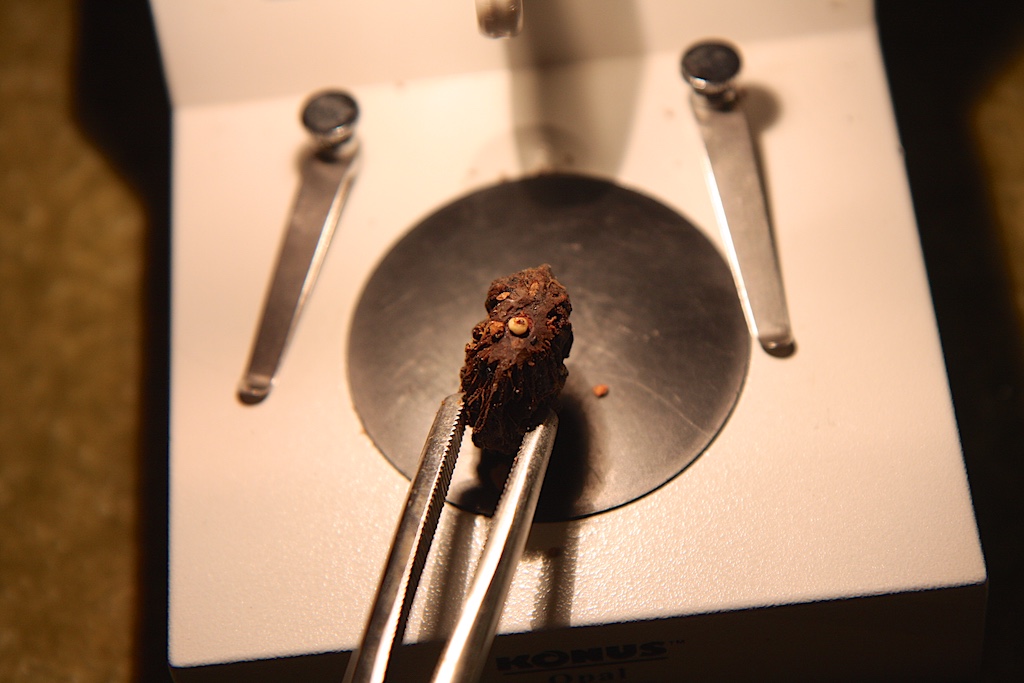 After two months or so, the first green spear began to emerge. From the second batch of 20 seeds, 10 showed clear growth of the embryo. We were very happy with this result on a seed that is so notoriously difficult to germinate! 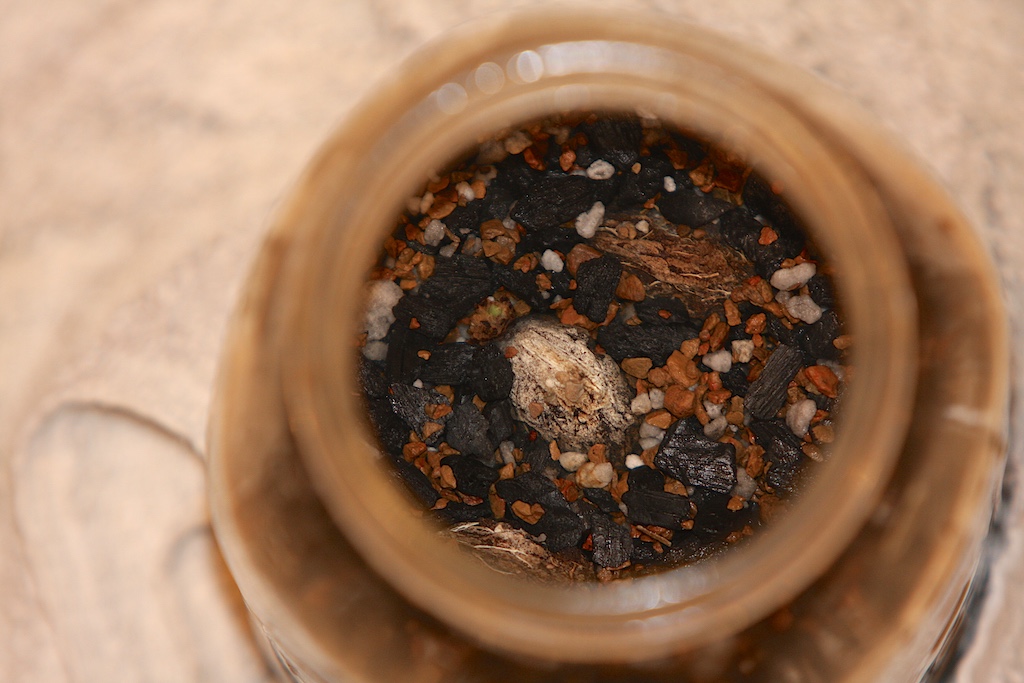 NOTE: This concludes Matt Patricelli’s contribution to the article.

Next week’s blog post will continue with the growing of these freshly germinated rarities.