So if I were to ask you to guess what plant has the largest inflorescence in the world, what would you say? “Whats an inflorescence?” OK, that’s just a scientific term for a group or cluster of flowers arranged on a stem. Basically the stalk of the plant that is holding all those flower clusters you see on your day lilies, hydrangeas, sweet peas and aloes. What some might simply call a flower is actually known to botanists as the “inflorescence.”

So what is your guess? If you guessed that it would be found on a palm tree, you would have been right.  It probably shouldn’t be any surprise that the largest inflorescence is also found on the largest fan palm in the world. 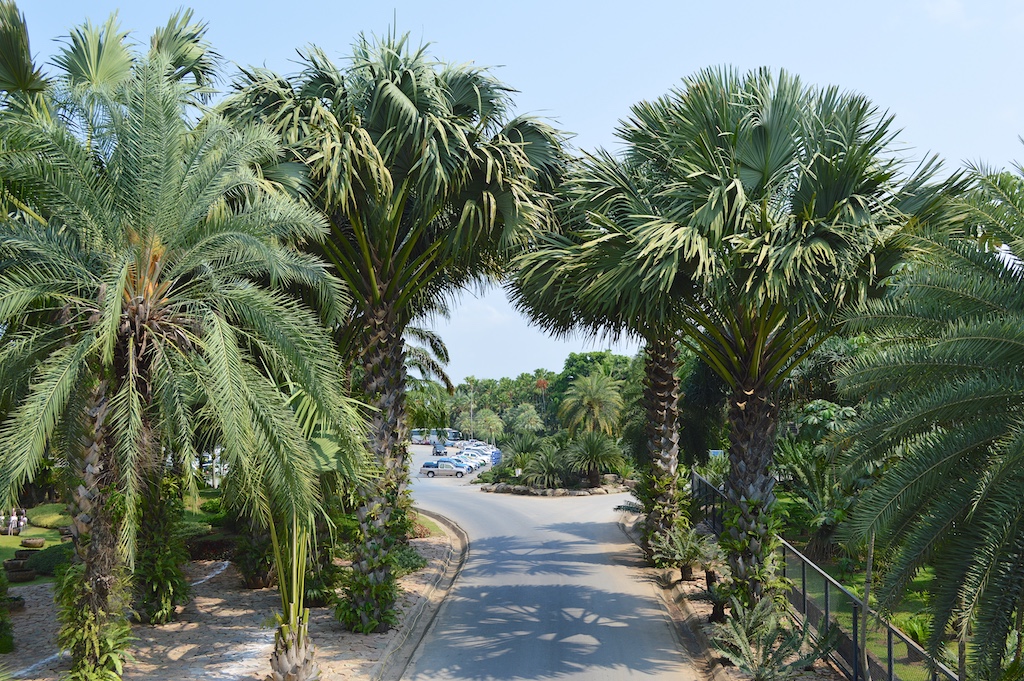 The palm genus Corypha bears the largest inflorescence of any plant found on this Earth. Its inflorescence can grow to 20-26 ft long and bear a few million tiny flowers borne on a branched stalk that forms at the top of the palm. All five species of Corypha are monocarpic and die soon after flowering. The tree doesn’t die right away when it flowers. Its golfball-sized greenish-yellow fruits will take almost a year to mature, and then it can take an additional year or more for the tree to exhaust all its stored energy and finally die. Most Corypha grow for 30 to 80 years, storing up energy and strength in the trunk to send out their monstrous inflorescence. Scientists hypothesize that being monocarpic in this case can be of great advantage in that the palm will produce so much viable seed that there is no way it could all be consumed by animals. Some of the few thousand seed it can produce will survive to germinate and carry on the plant’s existence.

All the other photos in this blog post are of Corypha lecomtei (Thai Talipot Palm). Endemic to Cambodia, Laos, Thailand, and Vietnam, it is actually a relatively short-growing Corypha, reaching typical heights of only 20 – 30 feet in wild. As a Thai native, it was the representation of the genus we found planted throughout our sightseeing tours while visiting Thailand. Except for the last photo, all these palms were located at the Nong Nooch Tropical Botanical Garden. It was there that a few Corypha lecomtei were in flower and where I was able to get these photos of their massive inflorescence. 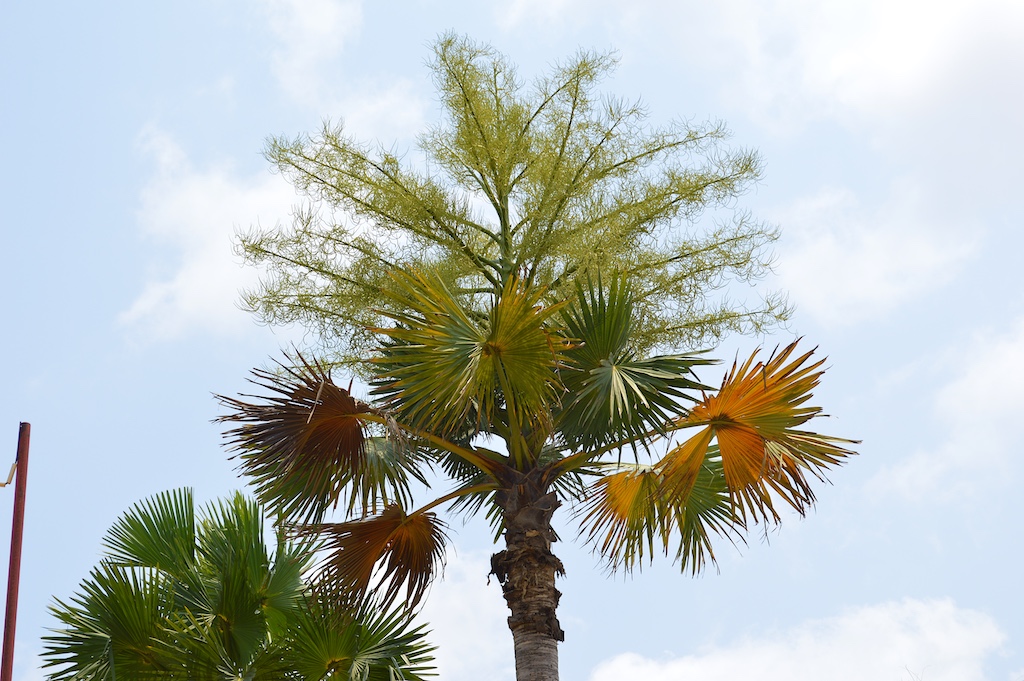 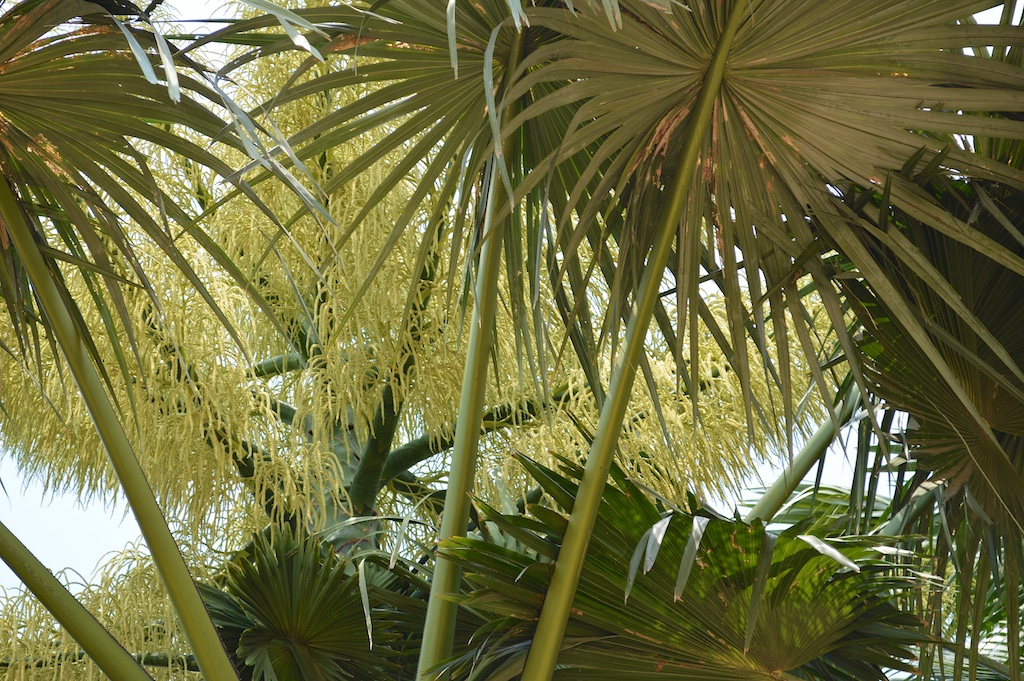 It is difficult to really grasp the scale of the inflorescence seen above. What you need to try to do is look at the size of the palms in those first two photos, and imagine this flower on top of them. Here is one in flower right next to another that is most likely not far from flowering itself. This inflorescence shown below has just started to emerge.

What? Still not impressed? Tough crowd. OK, I guess it is time to have yours truly offer up some scale to get an idea of how big Corypha lecomtei really is. Again, you need to remember that this is classified as a small Corypha in the genus. Here I am climbing the base of a Corypha lecomtei before I am spotted and kicked out of Nong Nooch. 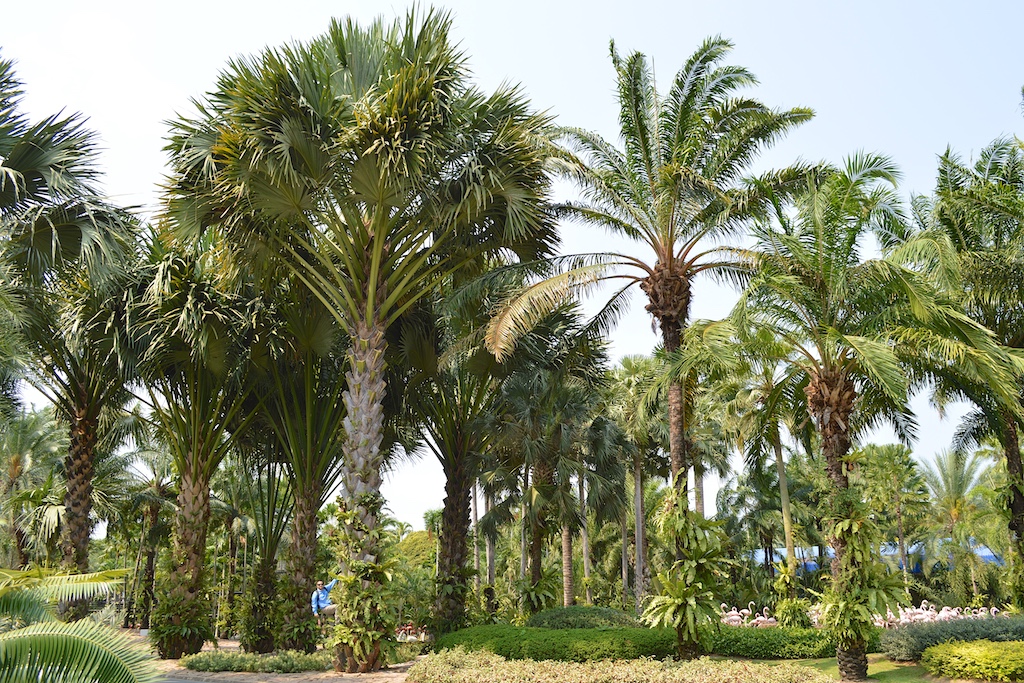 Here are a few runts found at Lumpini Park in Bangkok. My wife actually found these by accident while out for a morning jog.

Corypha in flower are a true plant marvel. While you really need to see one in person to gain full appreciation, hopefully this post won some of your admiration. You won’t ever find one flowering in my garden, however. Corypha is a subtropic to tropical grower only. Which is most likely a good thing for me because it would claim far too big a piece of real estate in my garden and be a nightmare to remove once it flowered. I will just be happy to visit the locations where this monster grows.