Back in April I posted about the transplanting of a Jubaea chilensis from my good friend’s garden to my own yard. During that transplant I also moved two Dypsis leptocheilos at the same time but did not post anything about it. Due to all the other blog material that has been loaded since, I really haven’t had time to document that transplant until today. The opportunity to get a large Jubaea chilensis and two trunking Dypsis leptocheilos for nothing more than the cost to move them is still a little hard for me to conceive. Of course the real treasure was the Jubaea chilensis (Chilean Wine Palm), but the two Dypsis leptocheilos (Teddy Bear Palm) were not far behind in merit. These are the two palms that Gary had to remove from his landscaping in order to place some screening trees in to hide his new neighbors. 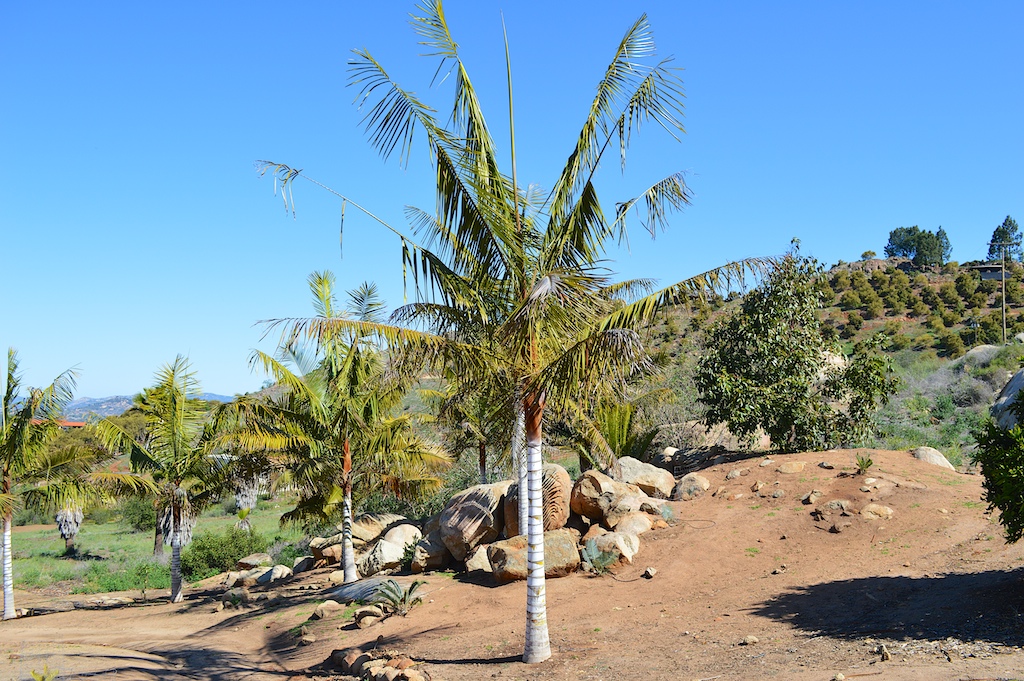 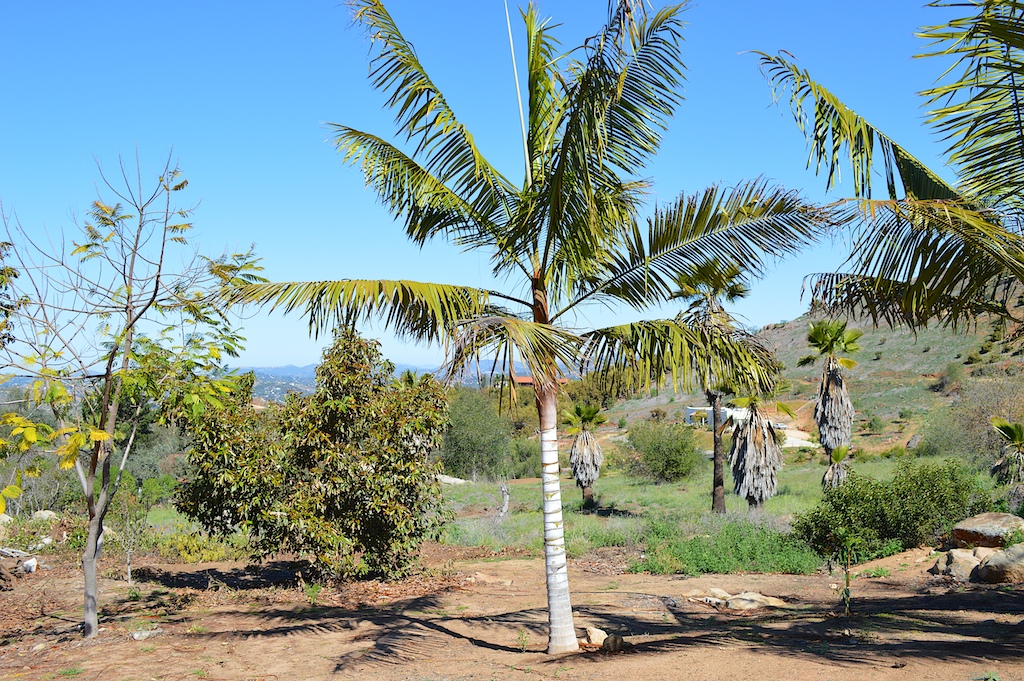 As you can see, these they are two excellently grown specimens that are full sun hardened. If trees like this were even available at a local nursery I would imagine the asking price would be $1,000 or more. But you will never find a palm like this for sale in California so it doesn’t really matter. Another reason why I was so intent to get those plants into my garden was due to the fact they are mature palms and each is flowering. What a great opportunity for me to do some hybridization with one of the many other flowering Dypsis I have in my yard. 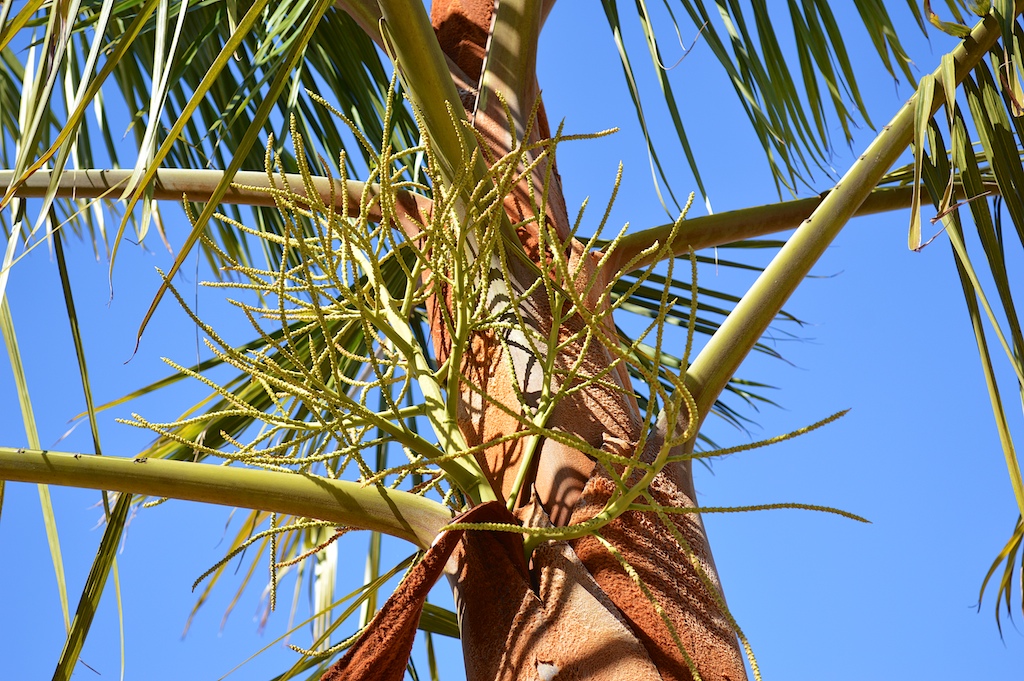 The first step in transplanting large palms is to figure out how you want to wrap the rootball. I am a firm believer in using the side-box method if I have enough room. The two Dypsis leptocheilos that I was moving had plenty of space to get a small excavator in to trench. I prefer side-boxing because it really is the best way to ensure the soil around the palm stays in place to provide the least amount of disturbance as possible. Of course “disturbance” is relative when transplanting a large palm, but the reality is the least amount of soil loss around the rootball provides for the greatest chance of survival. It takes a lot more time and effort than, let’s say, wrapping the rootball in burlap (preferred method of many), but I have yet to kill any transplant that I have done this way.

Below you can get an idea of how side-boxing is done. Once a trench is dug around the entire palm, the rootball is shaped for the side panels. With these two Teddy Bear Palms I went with 48-inch panels. Something this size and weight needs to be moved with machinery. So I also wrap the trunk to protect it from possible damage. 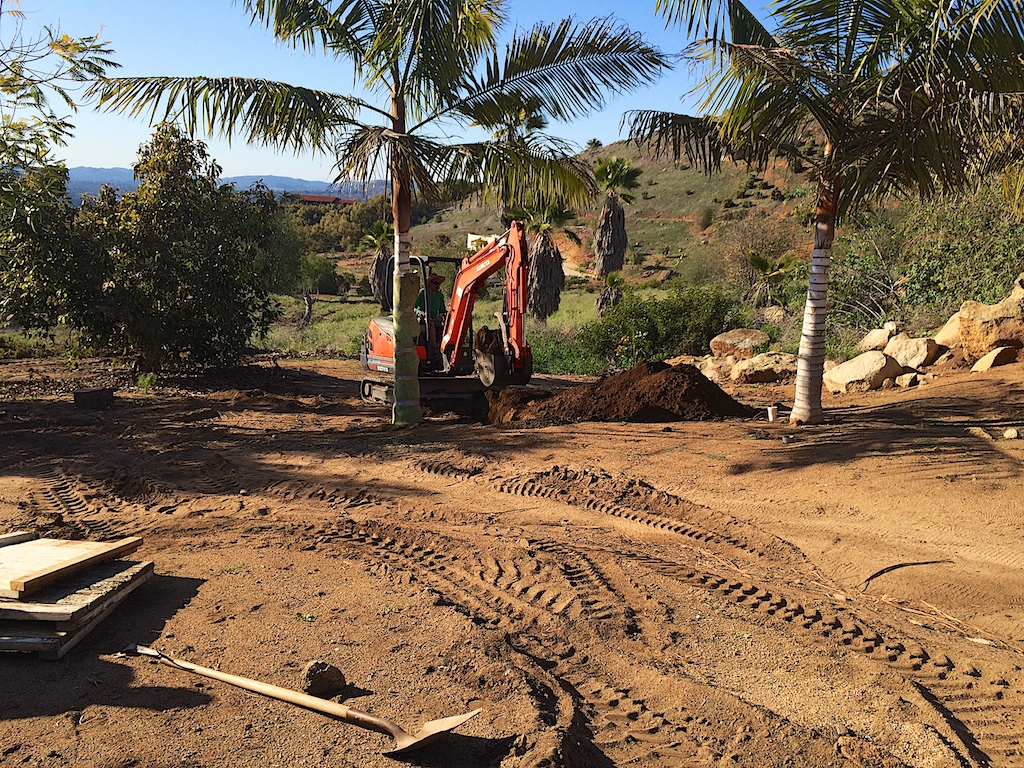 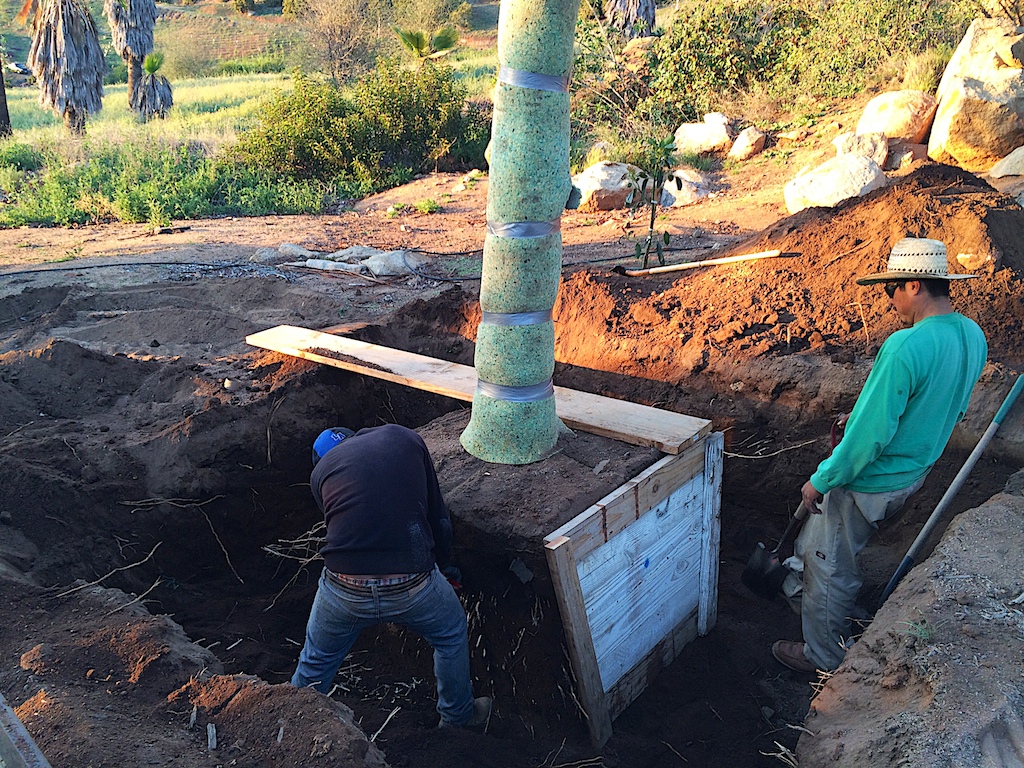 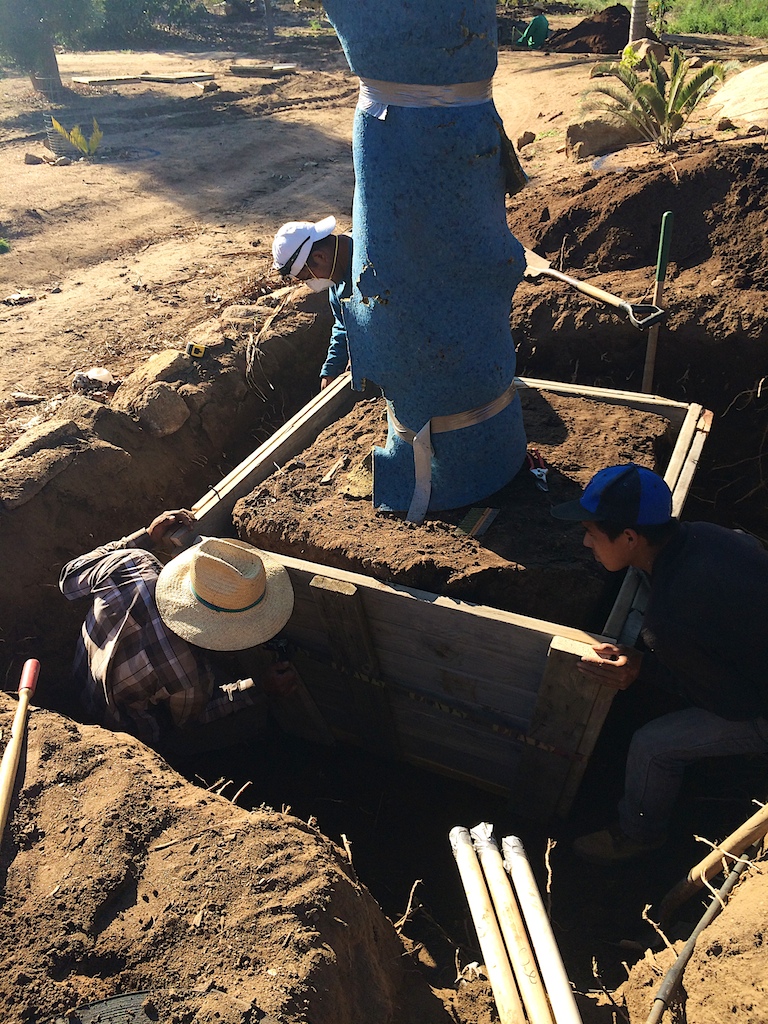 Here is one Teddy Bear Palm ready to be lifted out of the ground and placed onto the truck. The palm is tilted because the guys dug under the rootball to remove soil and roots so that they can put planks under each side to help hold the soil in place. In later photos I will point out those planks. 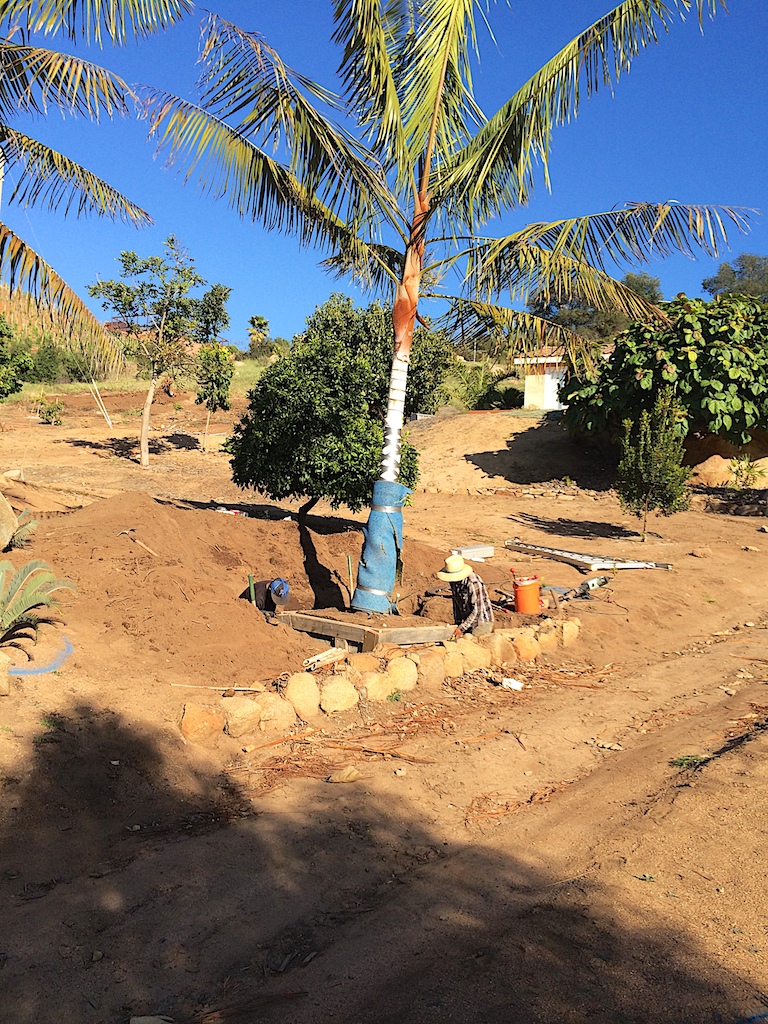 Due to the transplanting of a Jubaea chilensis taking more time than we had planned for, the moving of the Teddy Bear Palms to the truck didn’t start until well after 9 PM. So lights had to be brought in. Because of prior obligations for those helping with the dig, the transplant could not be delayed another day. So it had to be done that night. 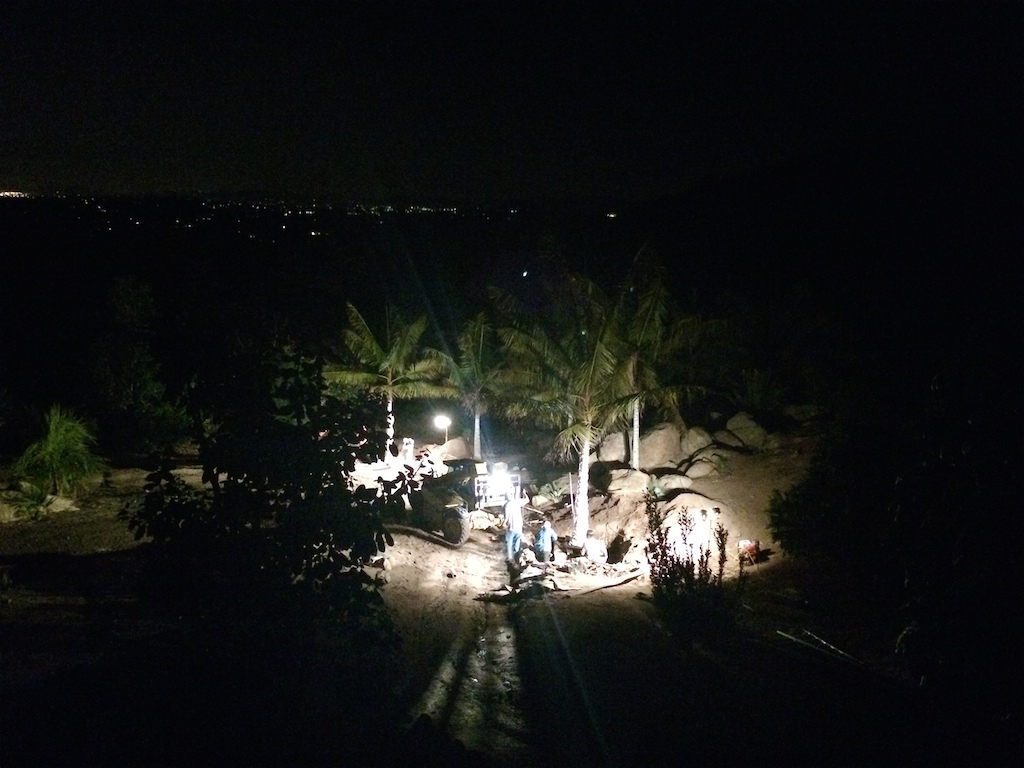 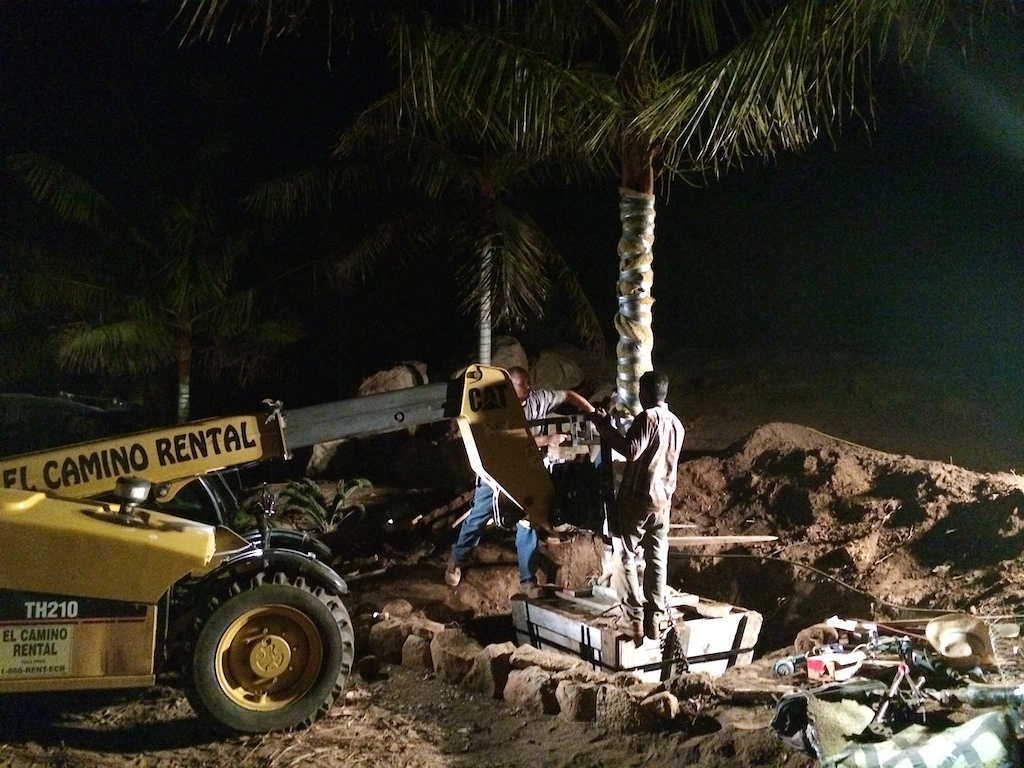 Trying to save costs where I could, I decided to rent a pettibone to lift the plants and load them onto the truck for transport. A crane rental would have made things easier but the cost associated with getting one out to my friend’s garden and the amount of time it would have taken to load everything would have added at least $1,000 to the total. A 24-hour pettibone rental is much more cost effective, and with the right operator it goes very smoothly. 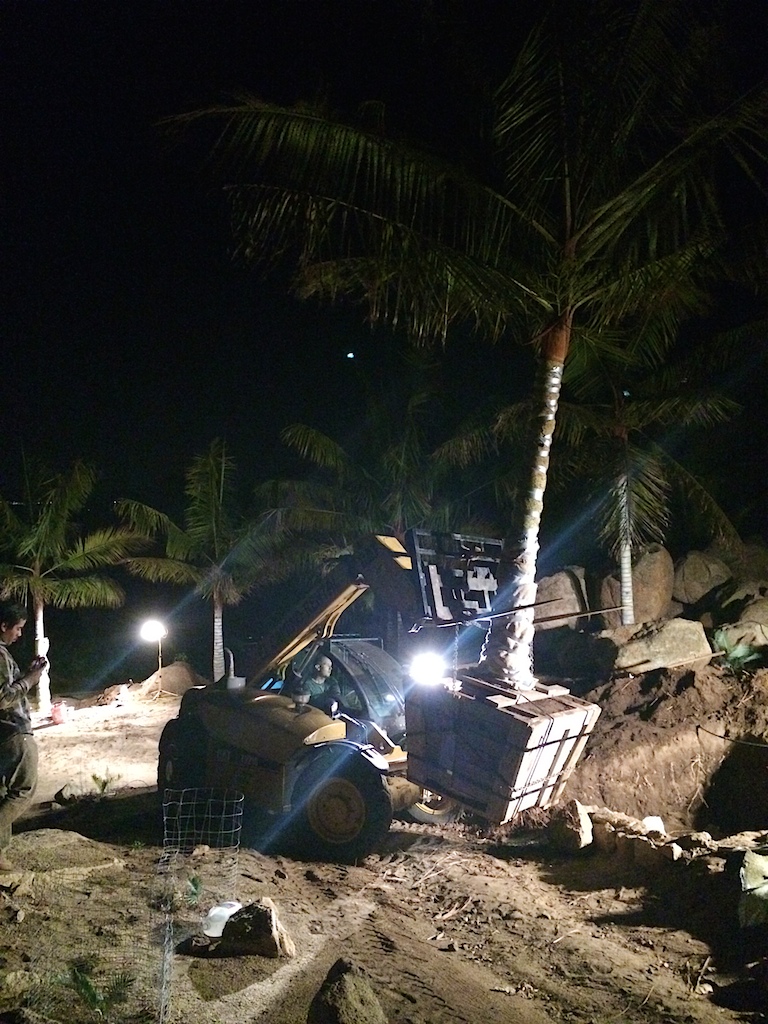 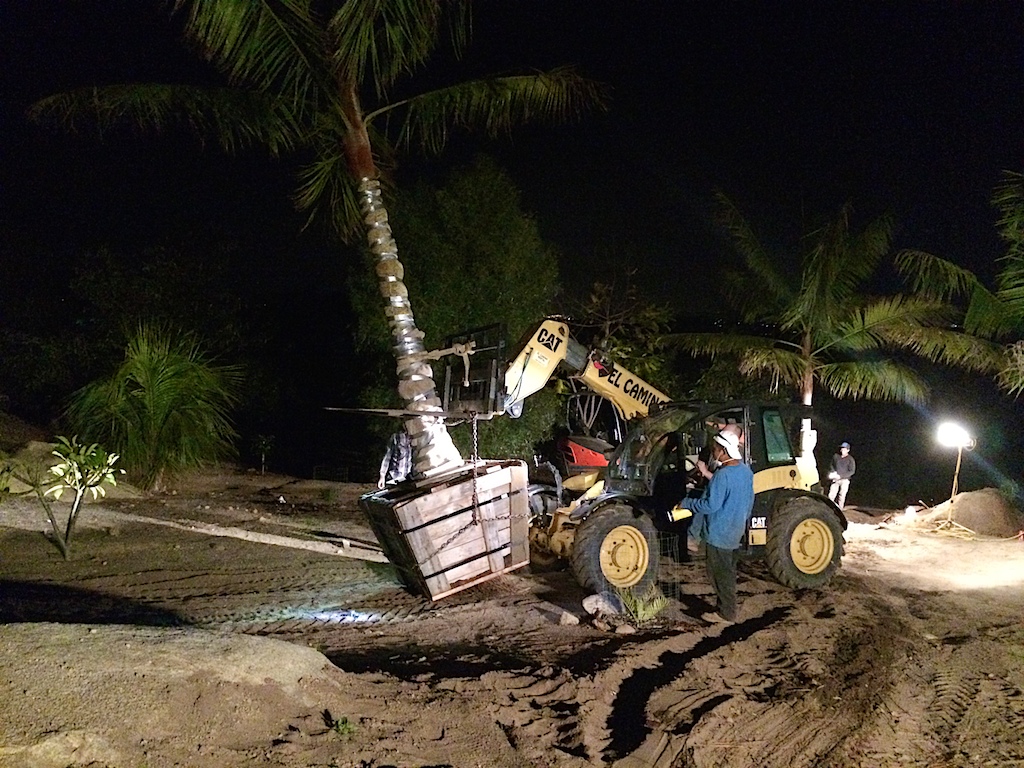 It is hard to see in the last picture and the one below, but we had to inch the box up the hill to the truck. The weight of the tree actually was just a fraction over what the pettibone could handle without raising up in the back. So the skilled driver would swing the box up and set it down, move the pettibone up and repeat this process. Needless to say, the guys didn’t get both trees on the truck until after 1 AM. I was long gone by 10 PM. 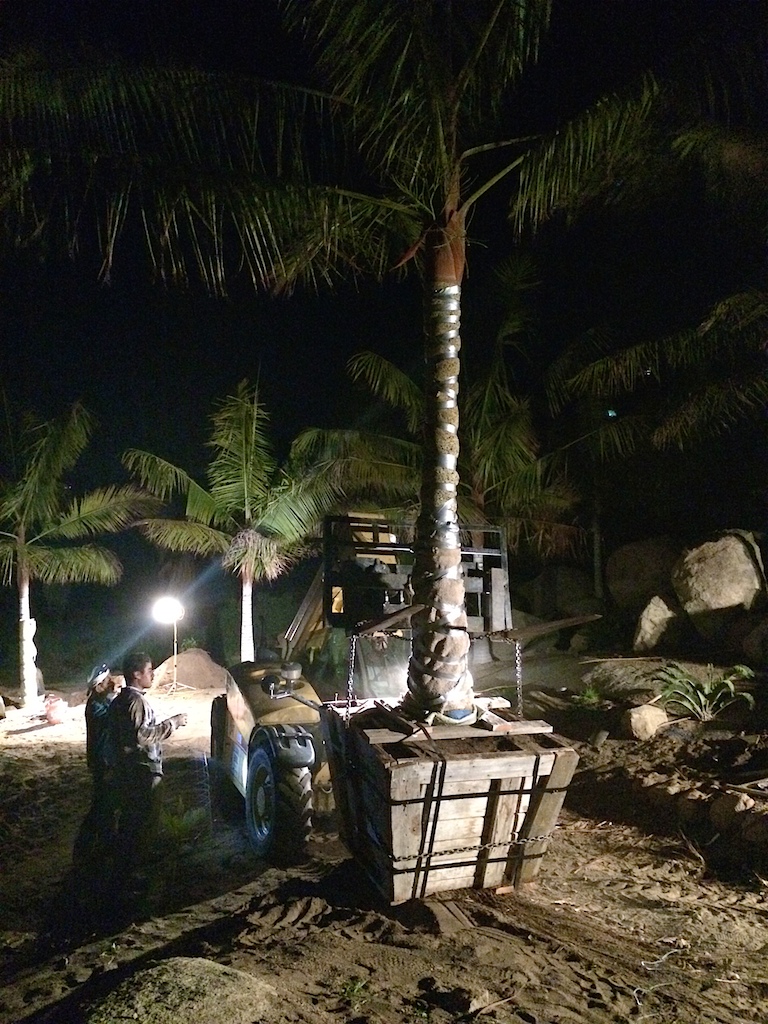 Early the next morning all three trees arrived. Prior to this I had coordinated to have some of my own guys that I use for yard work show up and help plant the palms. I also used a local crane service that is a few miles down the road. Due to the fact you are billed the minute the crane leaves the shop, it is important to find local crane service. I used Tony with Parkway Nursery. Tony is well known in the tree-moving field and I have entrusted moves to him a few times in the past.

With the first Dypsis leptocheilos stood up straight, it was ready for the cable to be placed around the box and tied to a kevlar strap. I find this system best in preventing any damage to the palm’s trunk during the hoist. The less rope, cables or chains in use, the smaller the chance of something rubbing or pinching into the trunk. Damage to a palm’s trunk can be unsightly, but the real damage can come in the form of fungal attacks from the open wounds. Fungus attacks are much easier on transplanted palms, so it is important not to add any other complications in an already traumatic process. 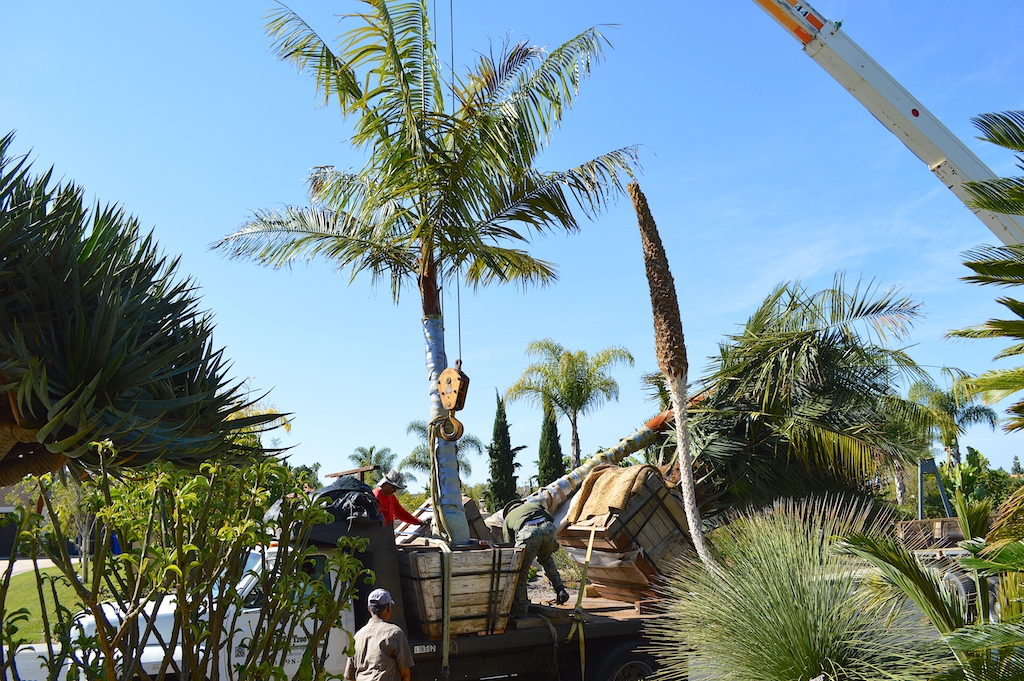 Considering the box is wider towards the top than it is at the bottom, when the cable is placed around the entire box it will cinch into place thanks to the weight of the plant. You can see in the next series of photos how it all works. An additional strap is wrapped around the trunk and tied to the cable, which helps keep the tree upright and easier to guide. 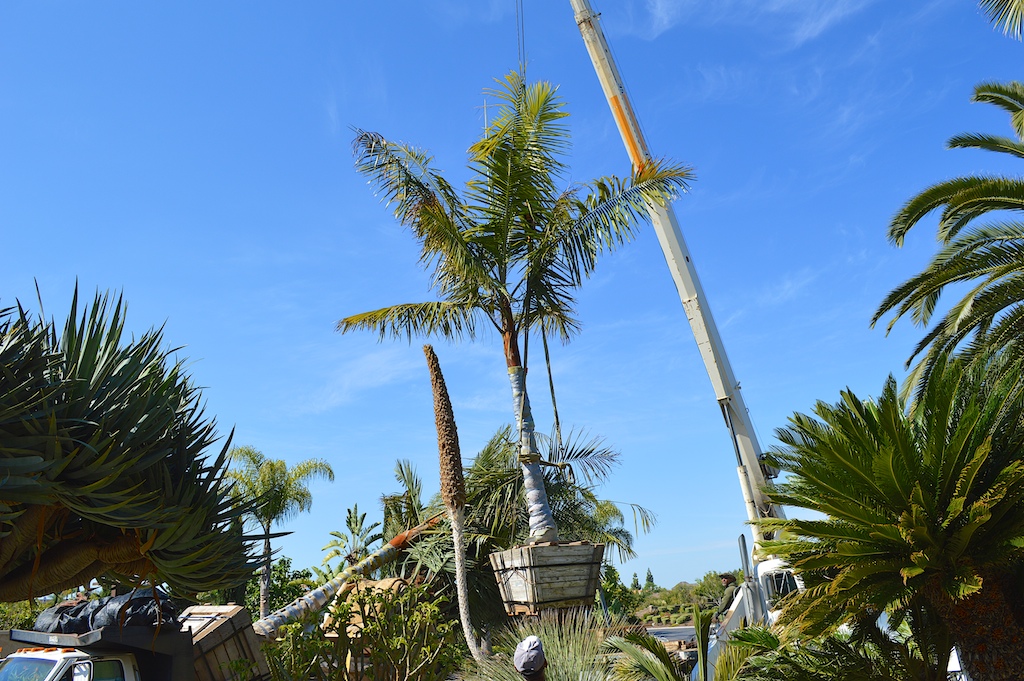 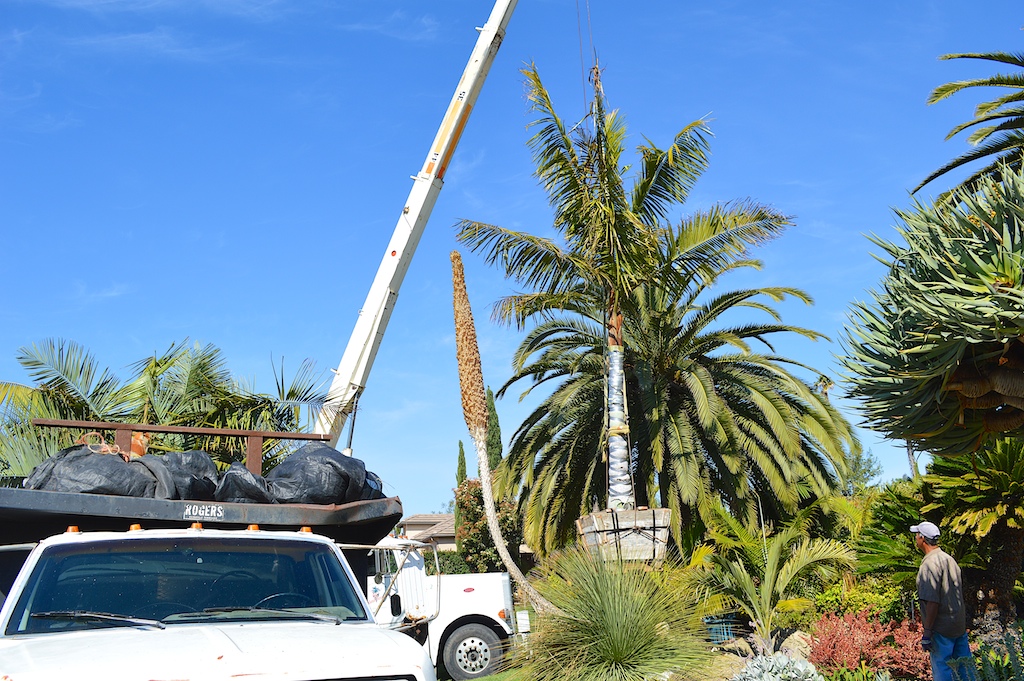 The first Dypsis leptocheilos is in place. It took about 30 minutes from the initial preparation for the crane to it being placed into its final resting place. 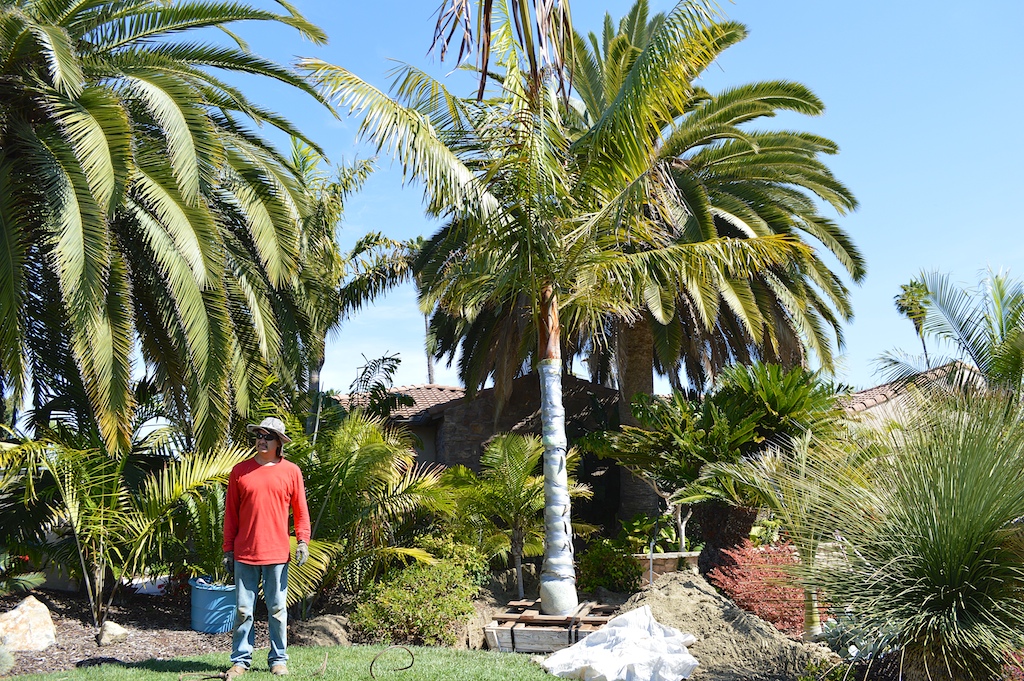 With the first set in, it was time to move the second Dypsis leptocheilos. 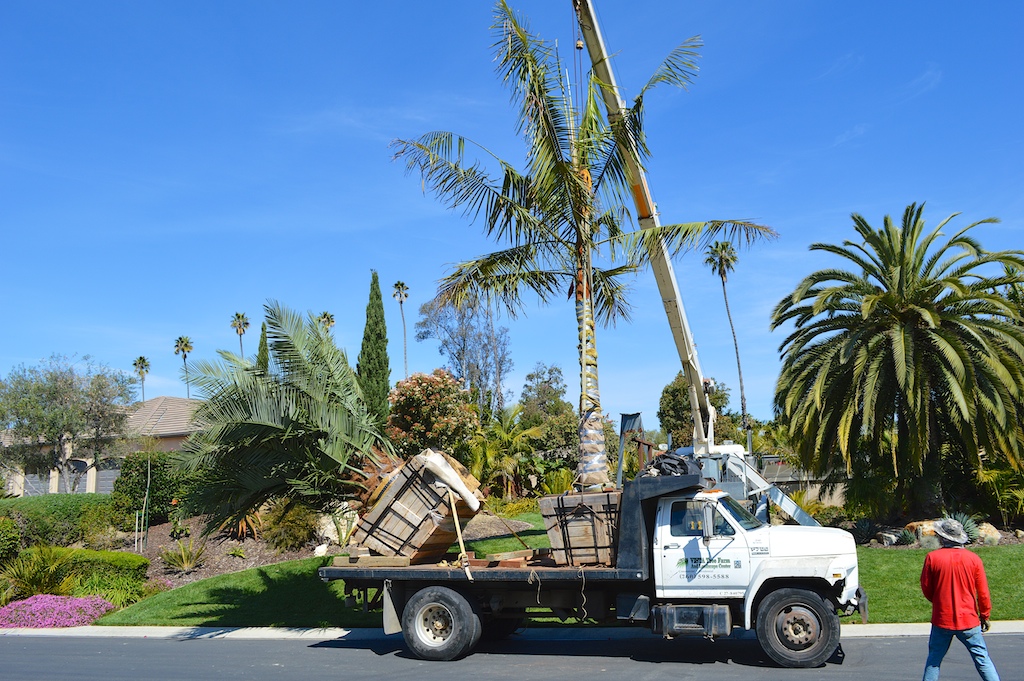 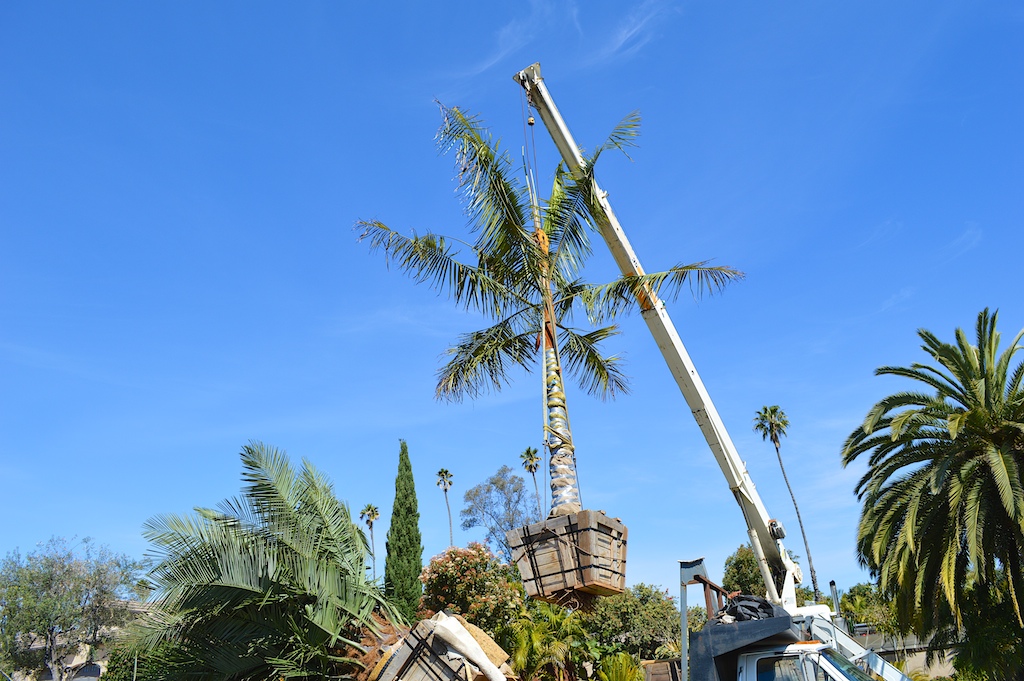 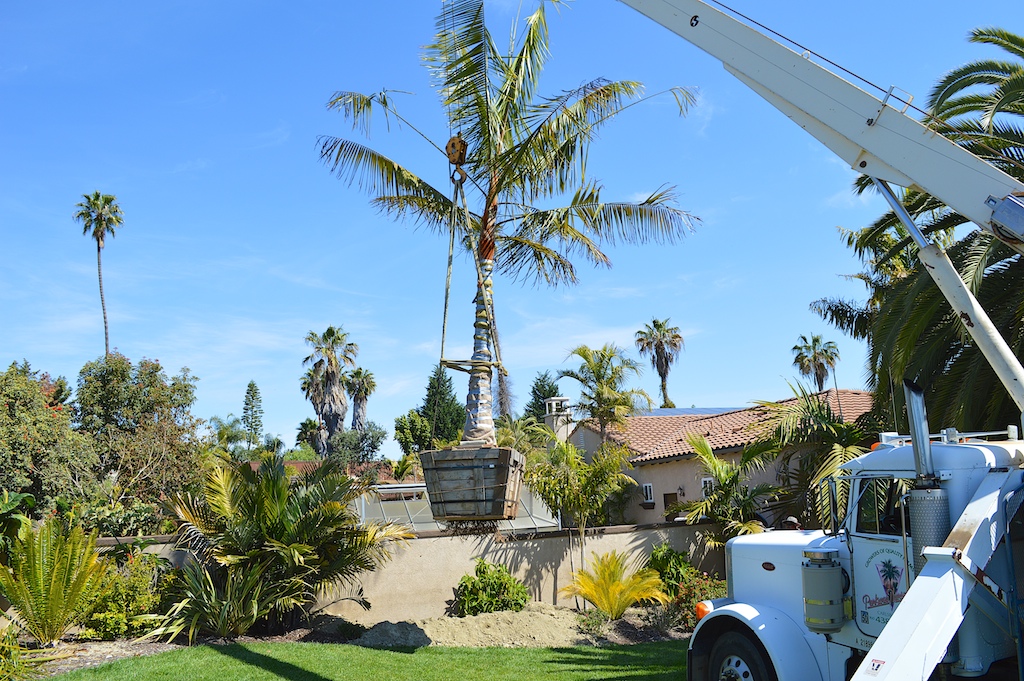 Of course things couldn’t go as planned on the second one. Nothing is ever easy when transplanting large plants. In this case the guys dug the hole too small, so the box didn’t fit. So we had to set the box down on the lawn and quickly dig a much larger hole. In the picture below you can get a sense for how the cabling system works as well. 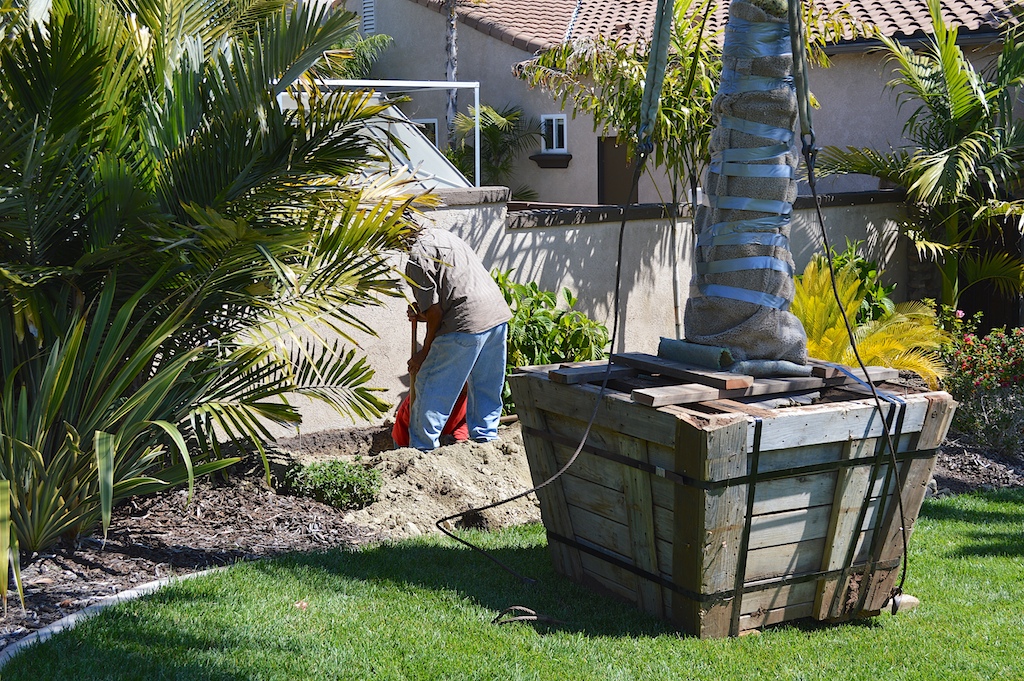 After twenty more minutes of digging, the second Dypsis leptocheilos is in its final resting place as well. 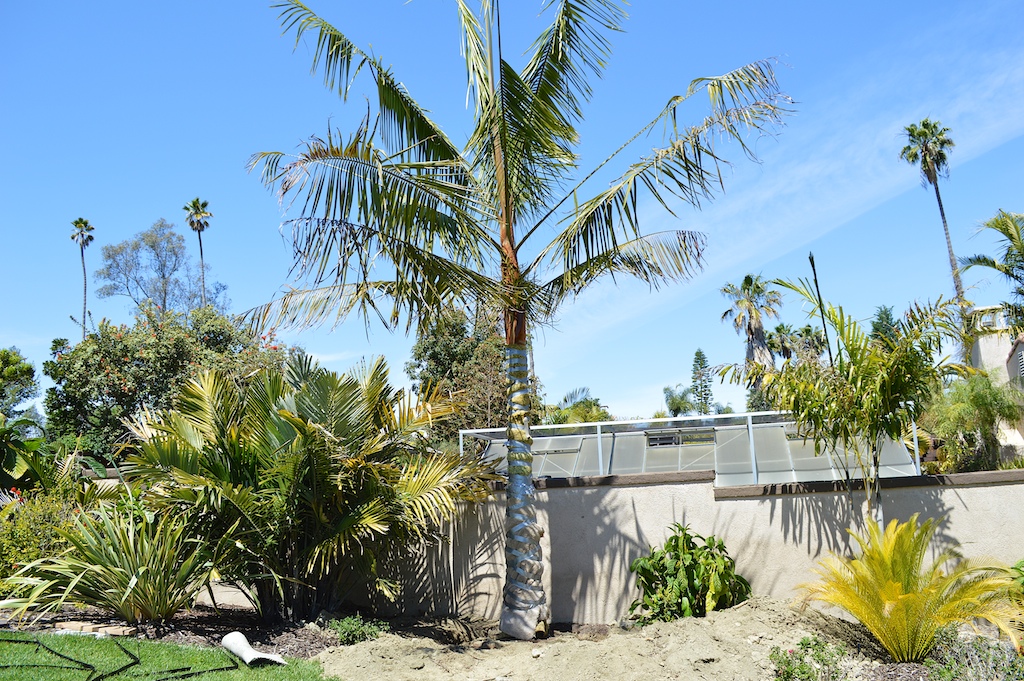 Once in the hole, the tin bands can be cut from the boxes to remove each side panel. We then watered in the soil to ensure no air gaps are left before proceeding to lightly compact the soil around the root ball. Once finished I removed the protecting foam from the palm trunk and freed the palm to its new home. 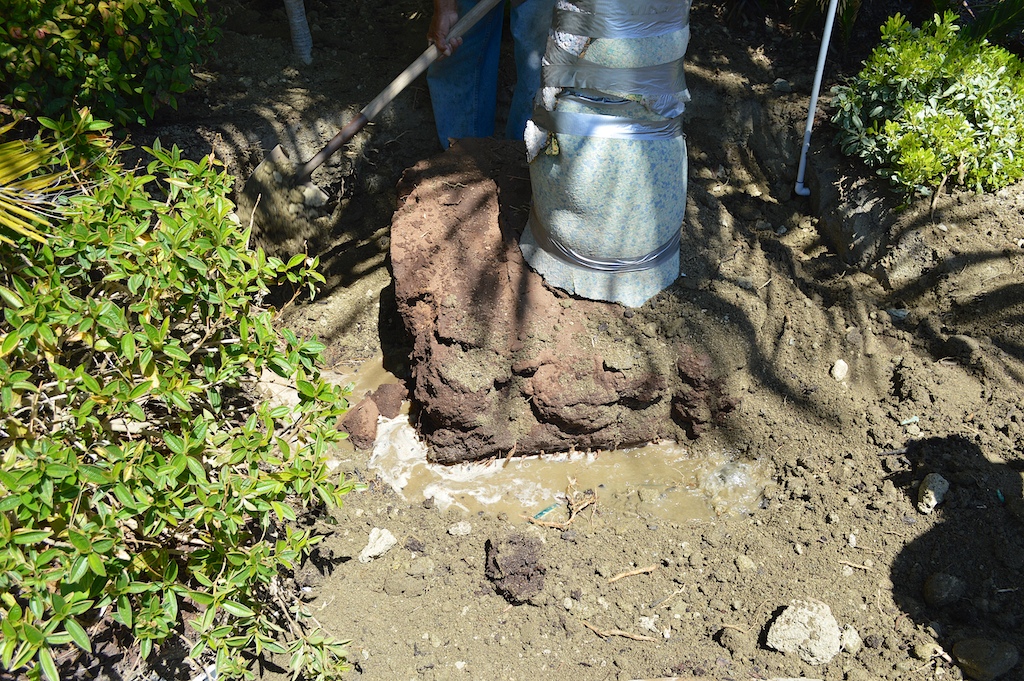 So this brings us to today—almost five months after the transplant was completed. Many palms can be moved without skipping a beat. It seems they never knew they were transplanted. This is the case for Jubaea chilensis. You can see how well it has adapted to its new home and grown.

My Dypsis leptocheilos did not fair as well. Now, while Teddy Bear Palms can be transplanted easily, that certainly doesn’t mean they wouldn’t suffer any set-back. Both of mine have been slow to grow up top but I know they are growing a massive amount of roots below. Dypsis leptocheilos is one of those palms that has to be well established in the ground for it to look its best. I had estimated that it would take three years before the palms look like they did before the move. As you can see here today, each lost quite a few older leaves and are looking quite sparse. 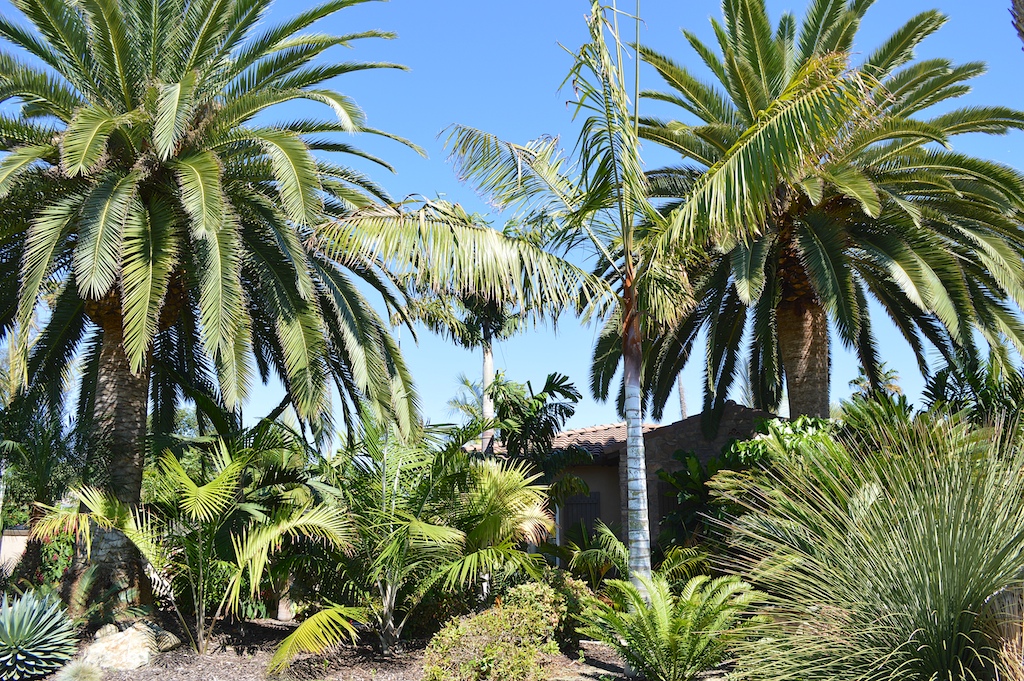 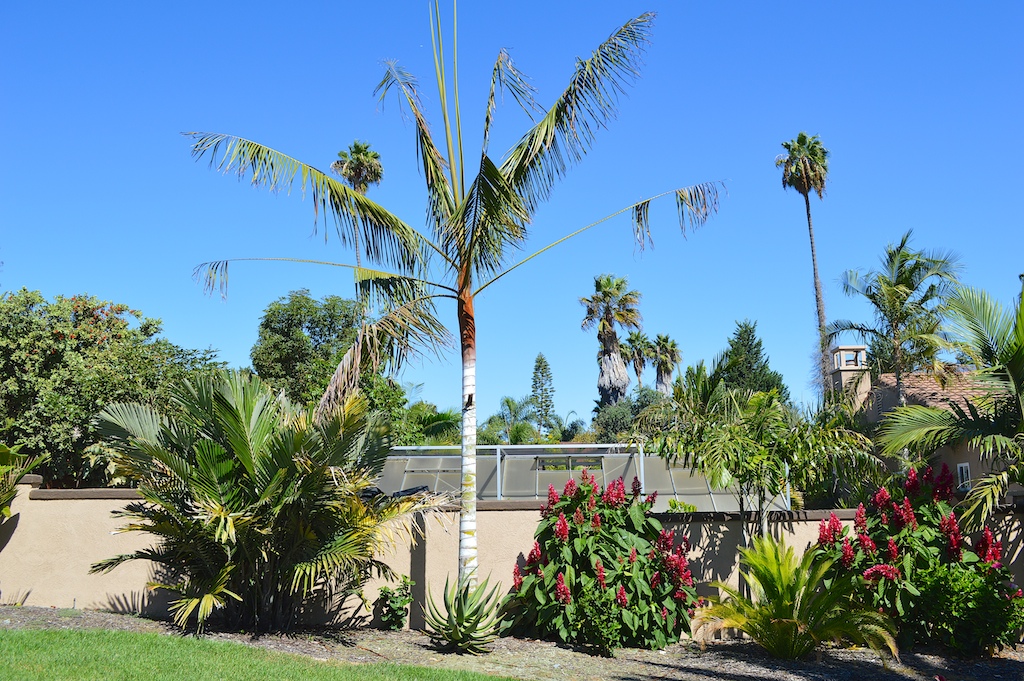 Each has three new spears waiting to be opened. This is clearly a sign that the palm does not have the root mass yet. Once it is well rooted and happy in its new home, these spears will open. 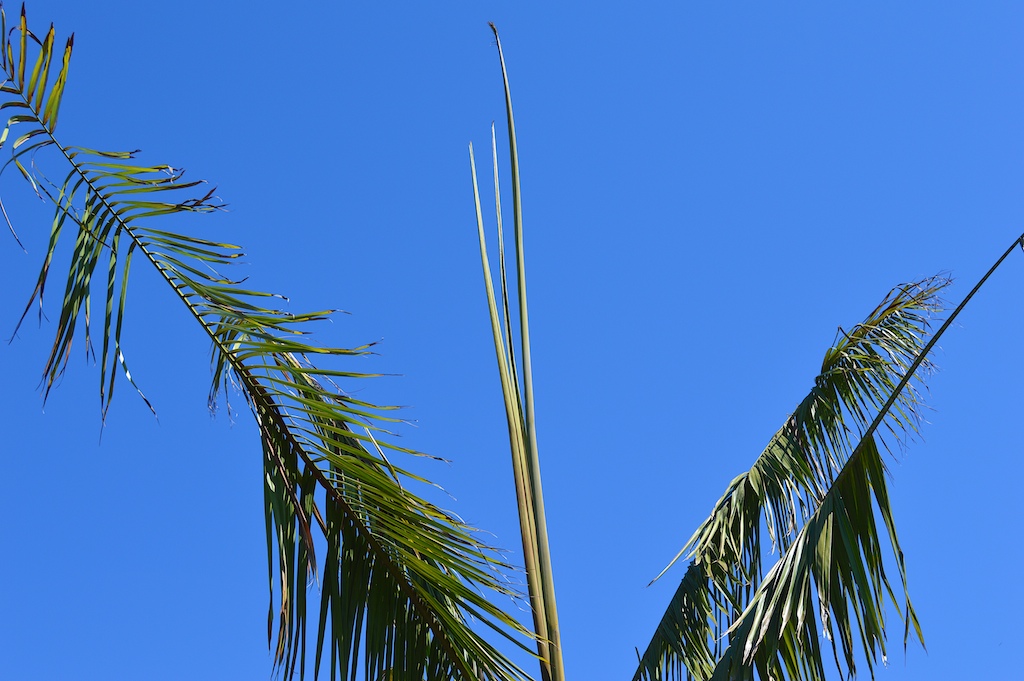 At the end of the day, anytime you move a mature palm tree you must consider it a success if it is not damaged during the move or dies after transplant. So I have nothing to complain about. I do still have a lot of landscaping to do around these new palms—which I was planning on starting months ago. Where does the time go?