A large Jubaea chilensis (Chilean Wine Palm) is one of the Holy Grail palm trees in the plant world. I have seen an exceptional specimen sell for $30,000. Why would a palm tree garner that much attention or command that type of price tag? For starters, it is a slow-growing palm tree. It can take two decades for a Jubaea chilensis to show trunk. Second is the fact it has one of the fattest trunks in the world. Third is that they have a great degree of cold tolerance and can be found growing in places like Texas and North Carolina. And fourth, there just really isn’t a more stately or beautiful palm tree in the world. Put it all together and you get a very desirable palm.

Here is an example of one growing in my friend’s garden with my eight year old son for scale. Pretty darn impressive. 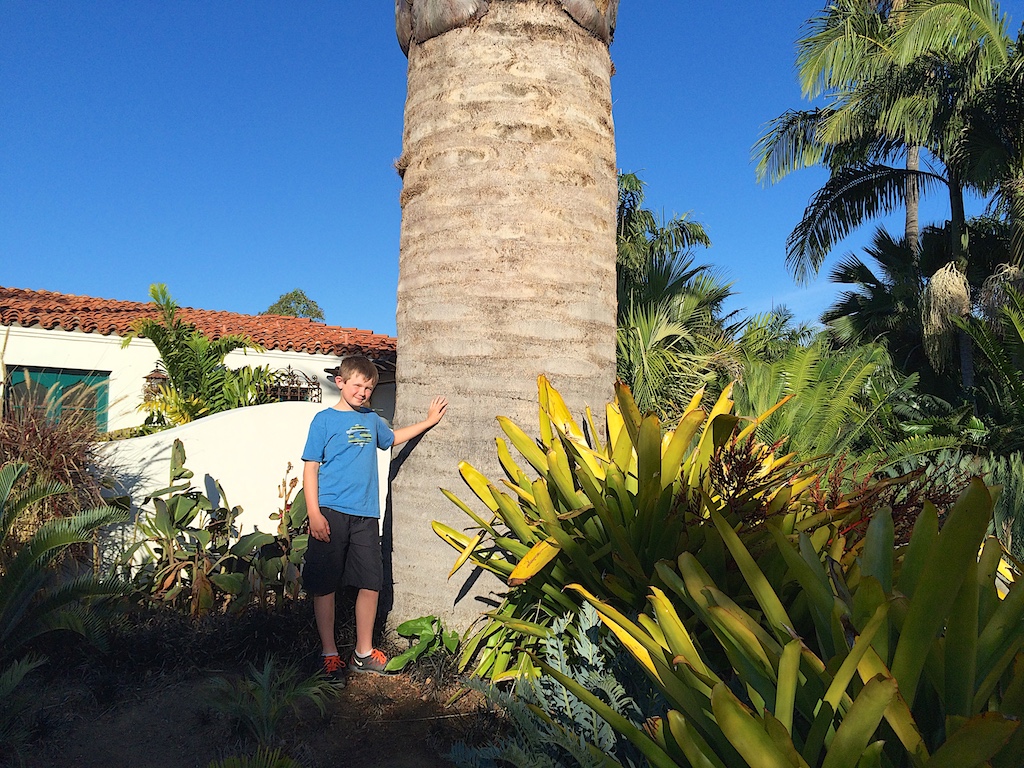 As a guy who has over 150 different types of palm trees in my yard it would have been a crime for me not to grow a Jubaea chilensis. So why didn’t I have one until just a few days ago? Because of the simple fact they are too expensive to buy at the size I needed in my garden. Also, it takes too long for them to grow, so I didn’t want to dedicate a large portion of my garden to the task. Ideally I wanted one large enough that I could plant under it. Basically, I wanted the reward without the labor. I just wasn’t going to spend the money. That was until my good friend Gary made me an offer I couldn’t refuse. He had to remove one of his seven remaining Jubaeas in the garden because his new neighbor was going to put in a driveway and the tree would have been too close to the road.

This Chilean Wine Palm, pictured below, is 15 years old from seed. Gary has the best possible soil and climate imaginable; so for most others growers a tree this size would take 20 years or longer. Trees this size sell for about $4,000 if you can find them in a nursery. 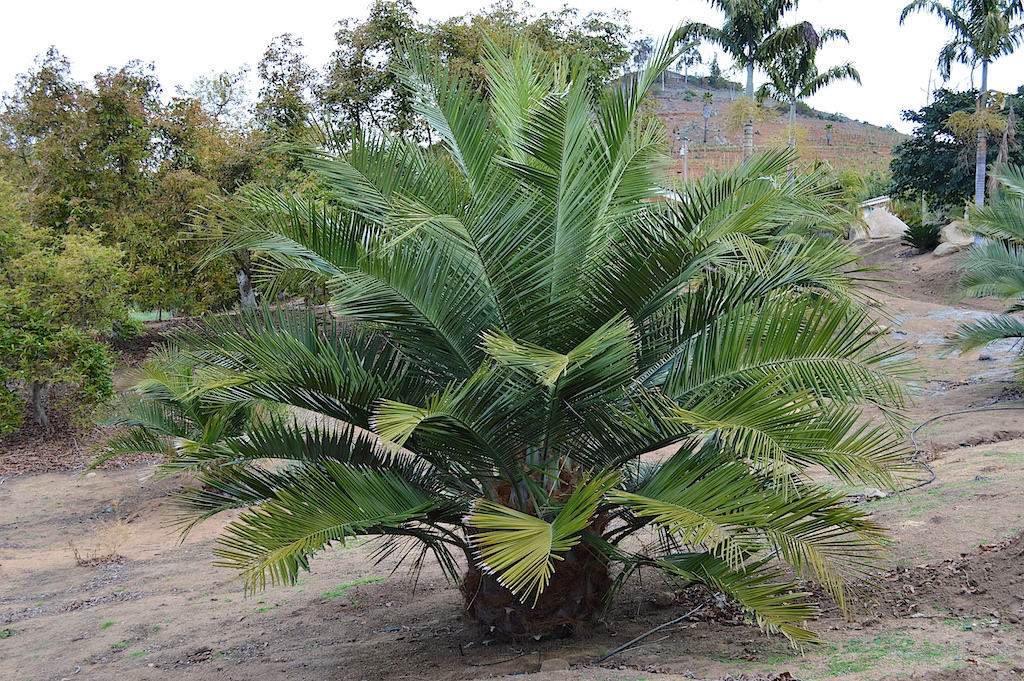 Moving a palm this large unfortunately cannot be done without heavy equipment. So I had to hire outside help to do the job right. It would have been a terrible shame to lose this palm during the transplant because I cut costs or corners. For this reason I decided that side-boxing the Jubaea chilensis would be the safest way to guarantee its survival during the move. The following pictures give you an idea of how labor-intensive it can be to side-box a large plant. 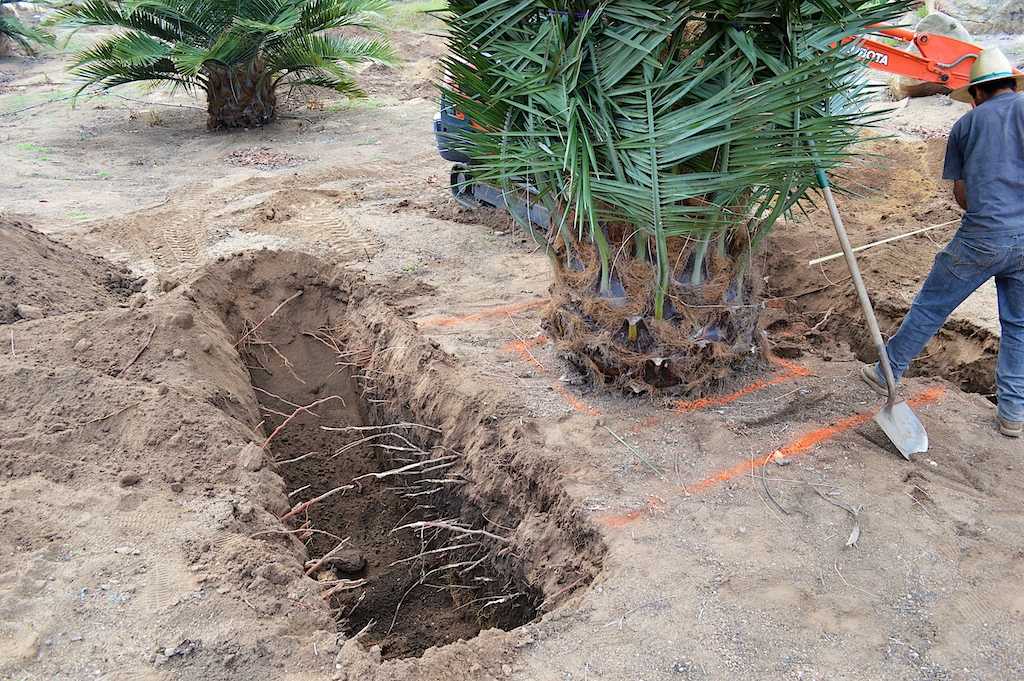 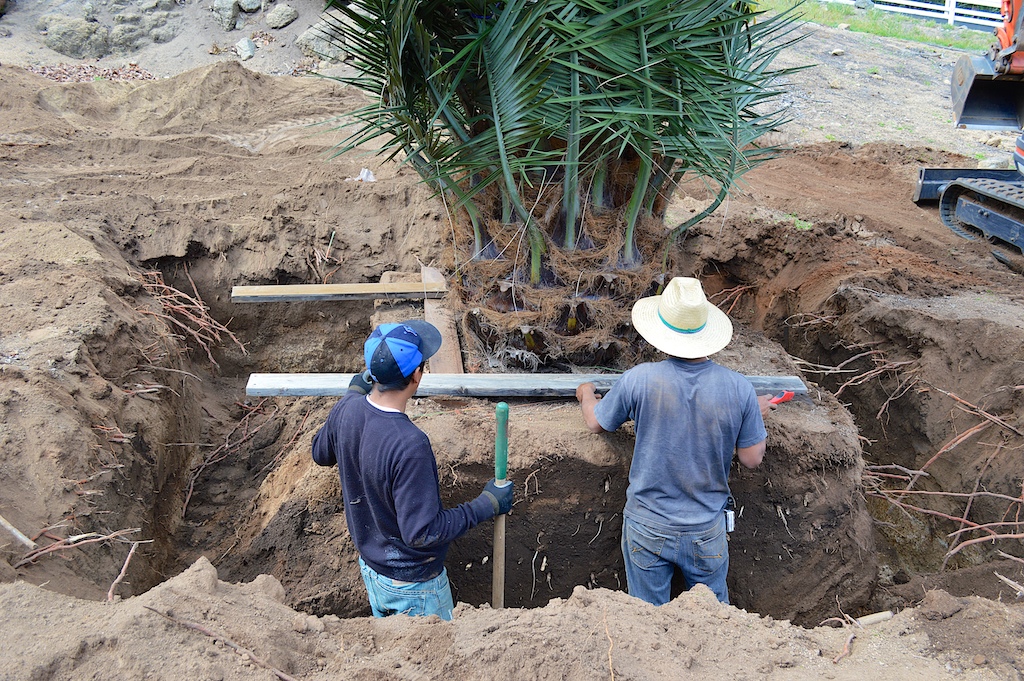 Once there was a trench dug around my Jubaea chilensis they could jump into the hole and start shaping the root ball with shovels to get the exact size needed to start boxing. 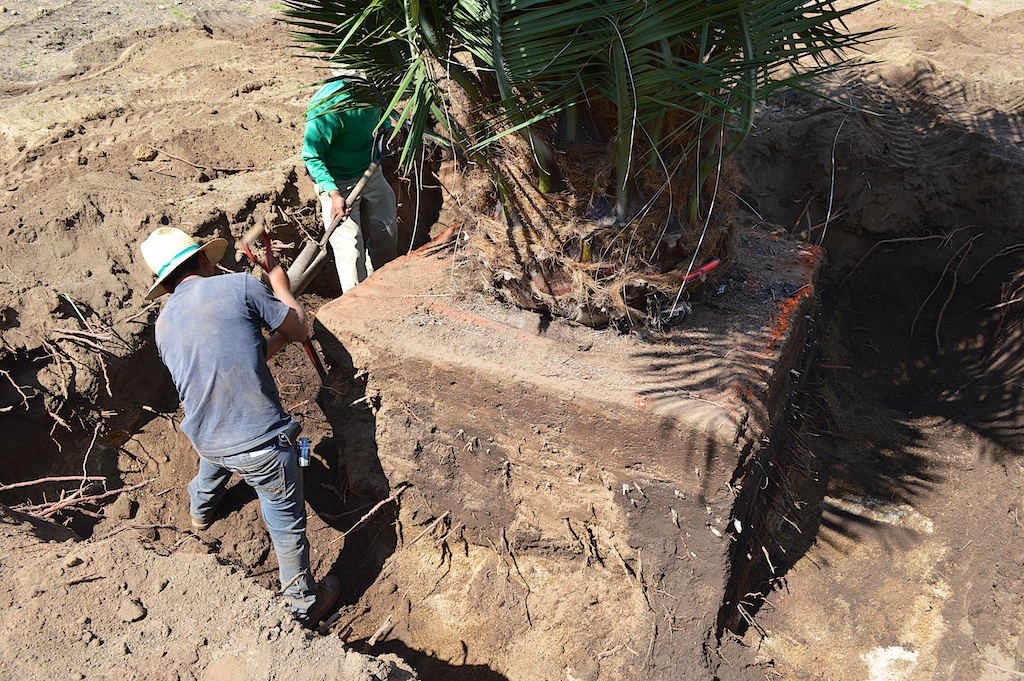 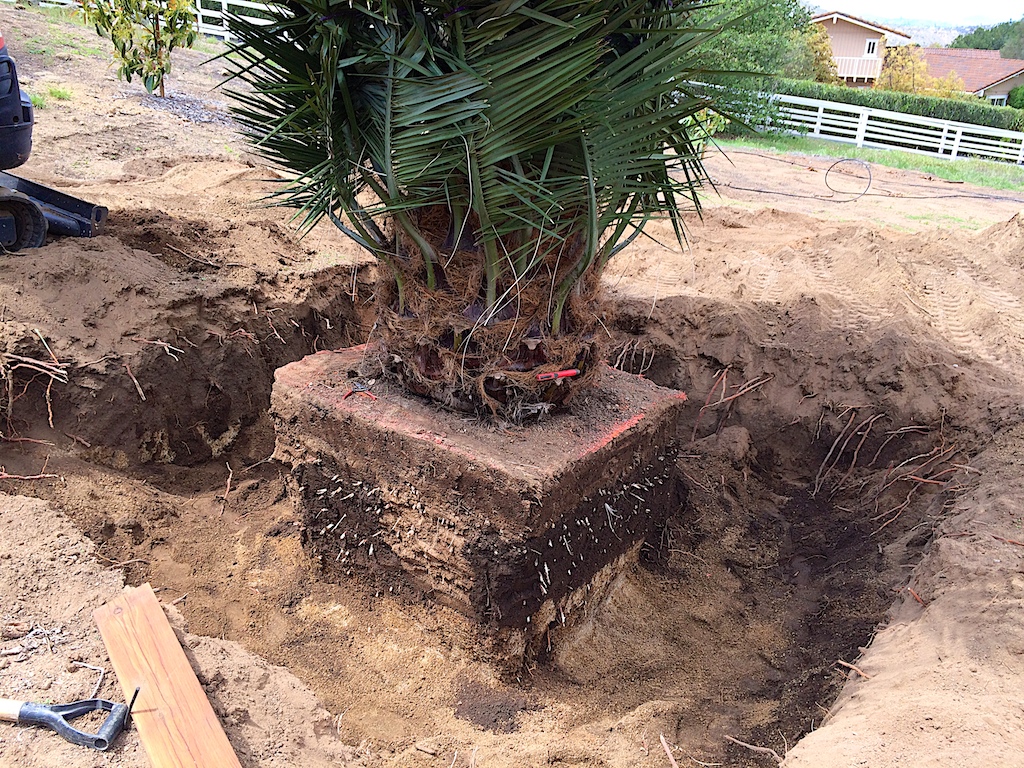 The sides of the boxes are made on-site, and how far down the roots grow into the soil will determine how tall to make the box side panels. You can see from the picture above where the roots basically stop growing. This measured down to about 36 inches. So my final box size would end up being 66 in x 66 in x 36 in.

A strap is used to hold the sides in place so the bands can be wrapped around the box and cinched tight. 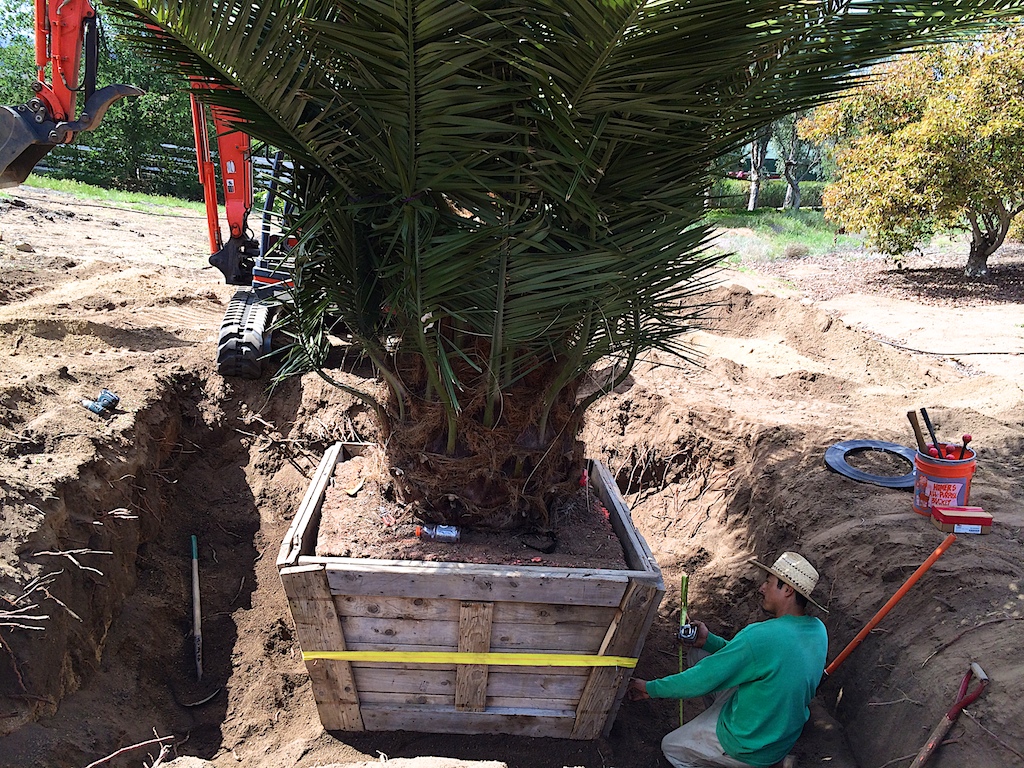 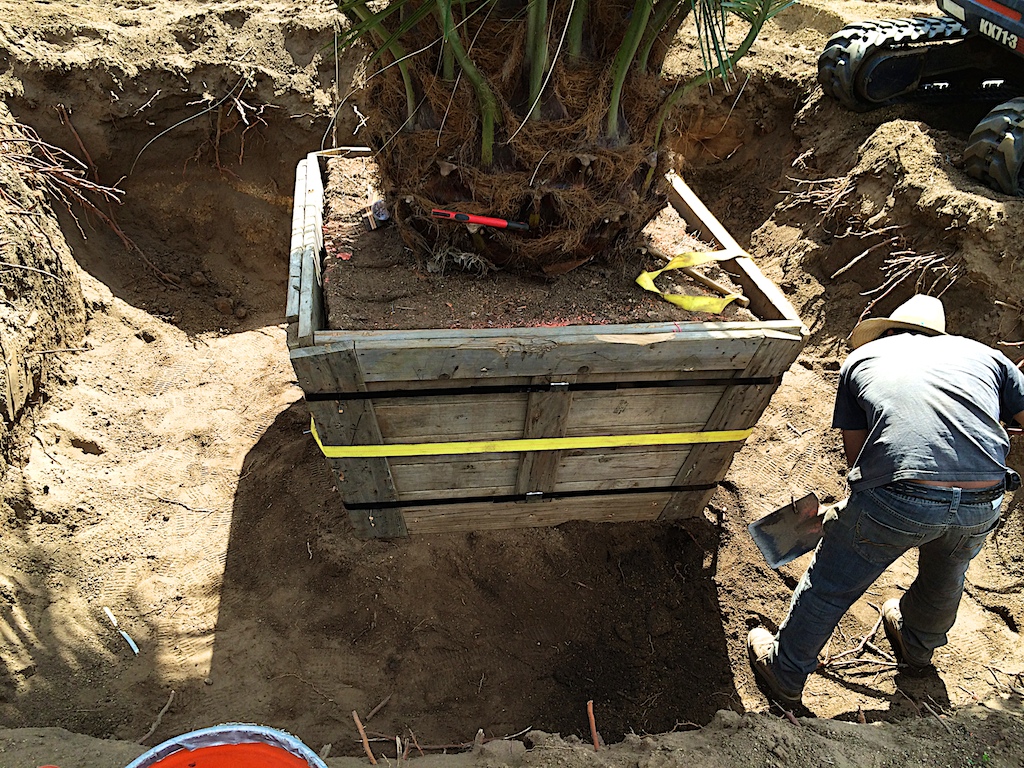 Once the sides were banded together we could start the process of enclosing the bottom to prevent the soil from falling out during shipment. It is important to ensure the dirt stays together around the root ball to lessen transplant shock. With the help of the mini excavator holding the box in place we could start clearing dirt out from under the palm. 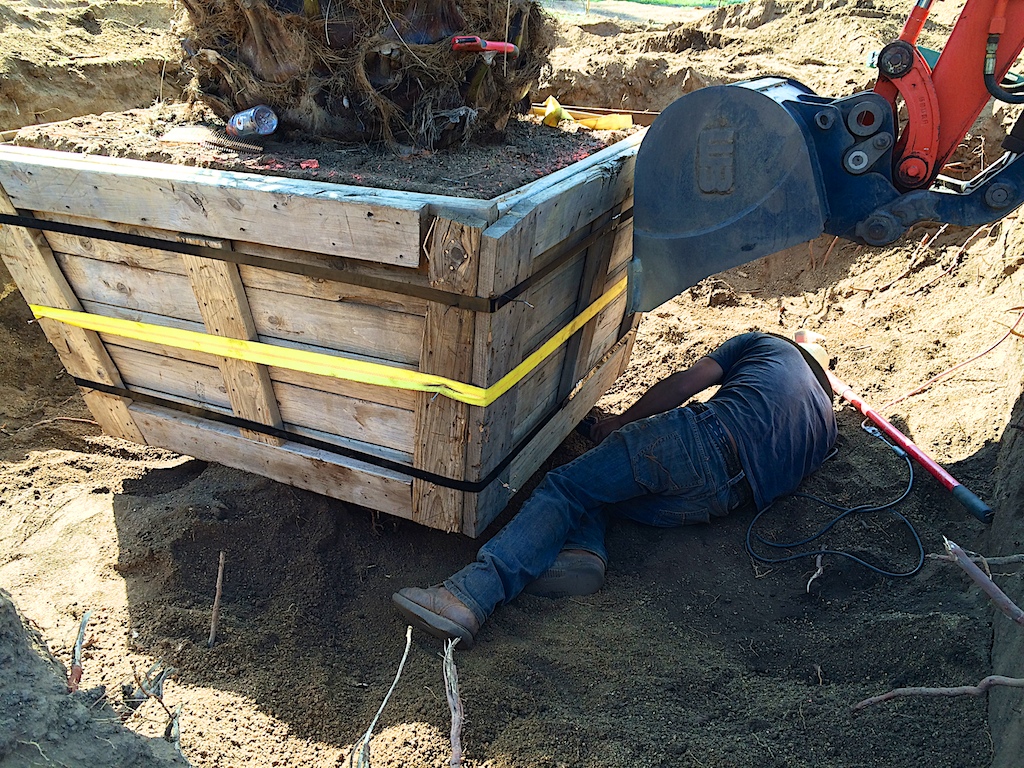 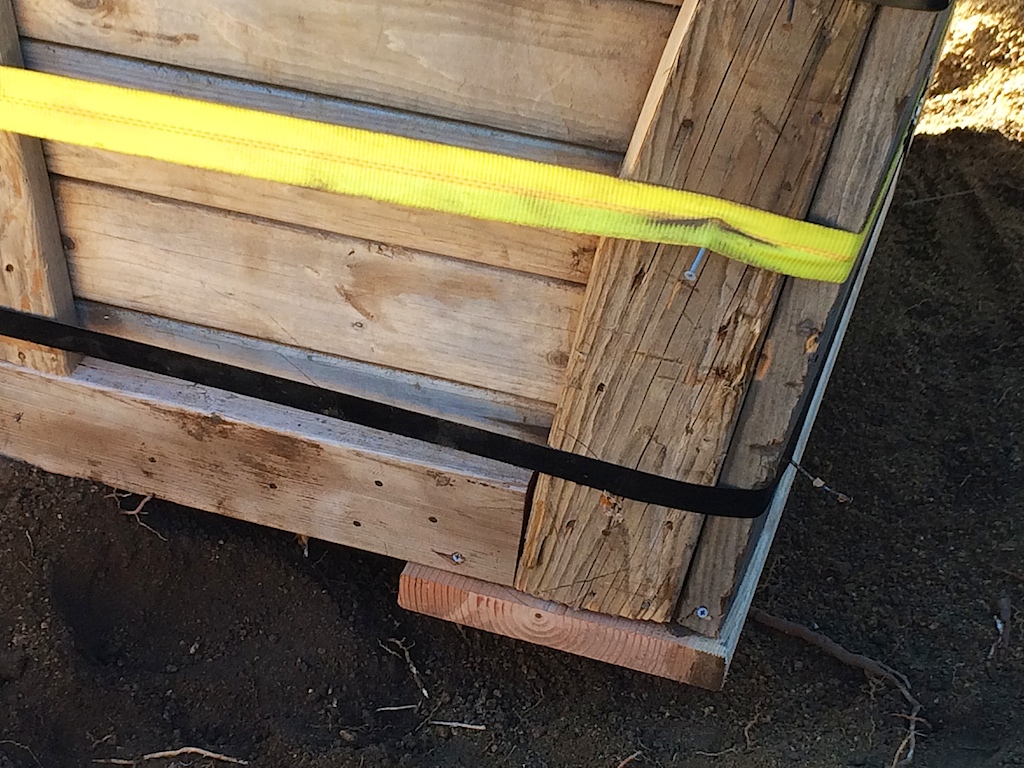 The next step is to enclose the top of the box as much as possible. This is a very important step and one that many seem to forget or skip, which can lead to disastrous results. With a soil like Gary’s, where it is very soft and airy, the dirt will want to give way. When the plant is being loaded onto the truck or craned off the truck into its new home it could easliy be ripped from the box. That certainly defeats the purpose of side boxing. I actually witnessed this very thing during another Jubaea chilensis transplant. I would rate Chilean Wine Palm as a very easy transplant. But there is one thing they do not like, and that is having damage to their root initiation zone (RIZ). Being ripped from a box can do this, or at the very lease expose the root initiation zone during transplant. 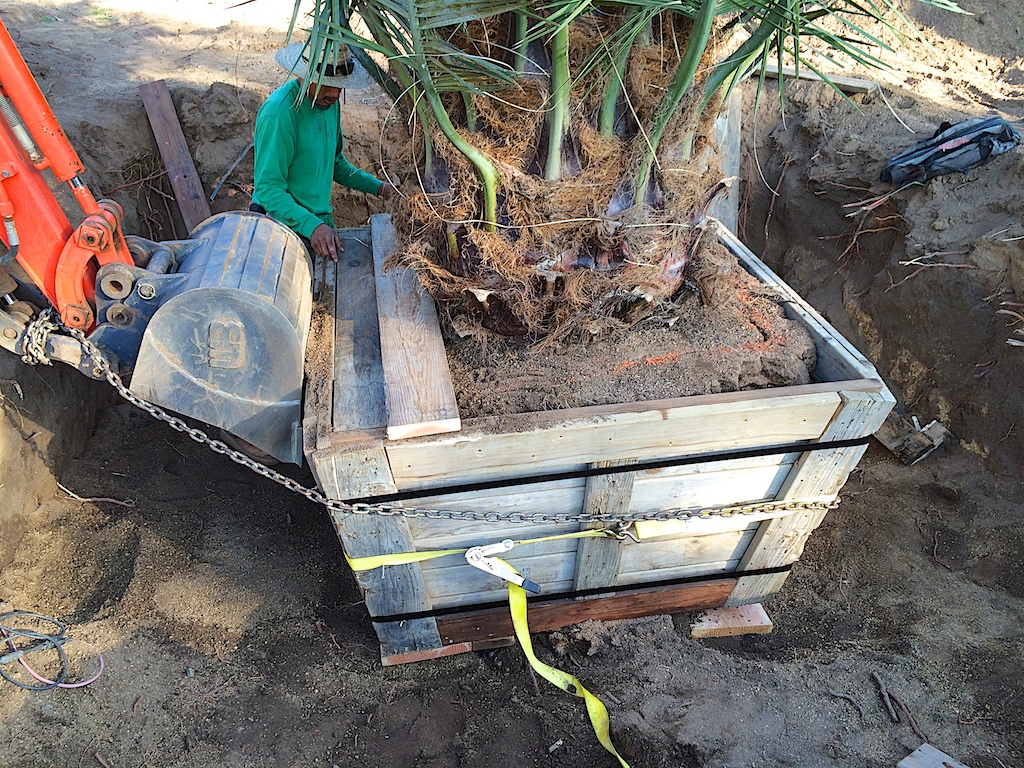 Here is my Jubaea chilensis all boxed up and ready to be loaded. 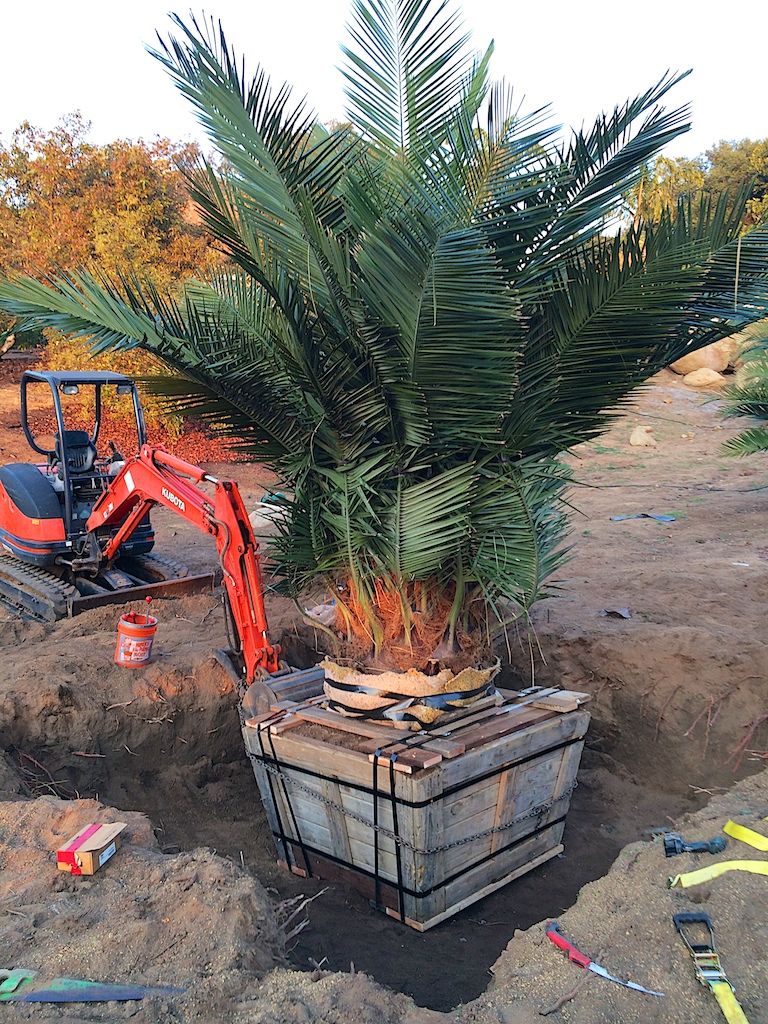 Being the amateur blogger I am, I completely missed the loading of the plant onto the truck. They used a small pettibone forklift to accomplish the task. Once on the truck they put the finishing touches on, closing up the bottom to ensure no dirt would fall out. 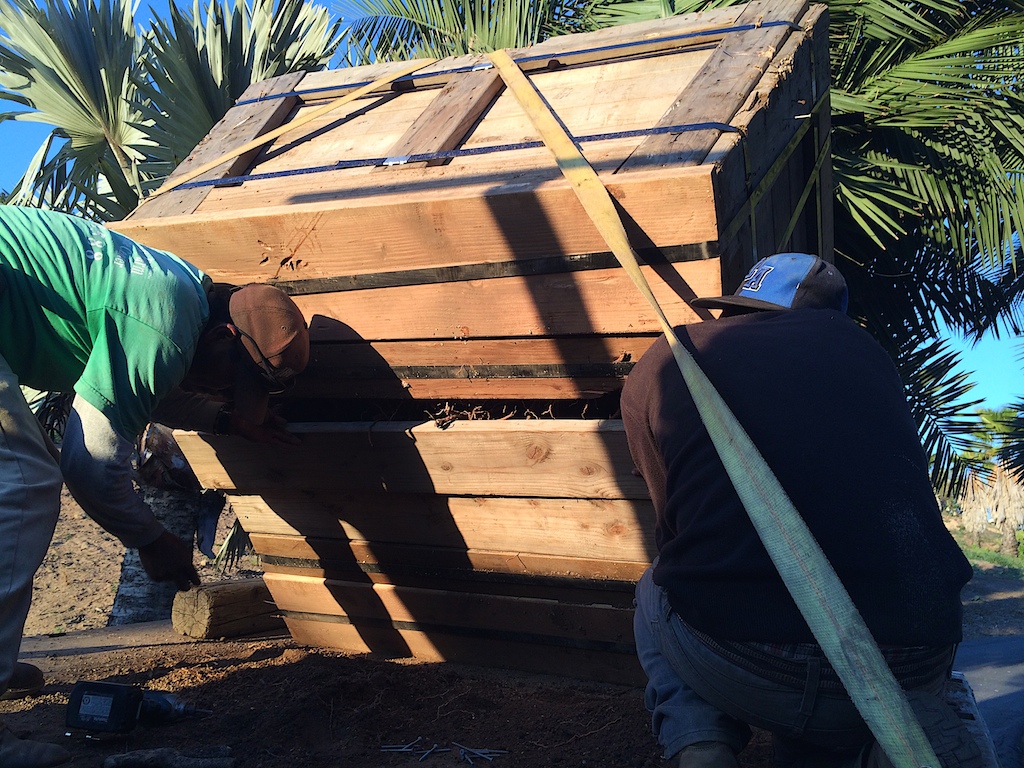 With the close of day upon us, here is the palm all tucked in for the night and ready for the busy day ahead tomorrow. 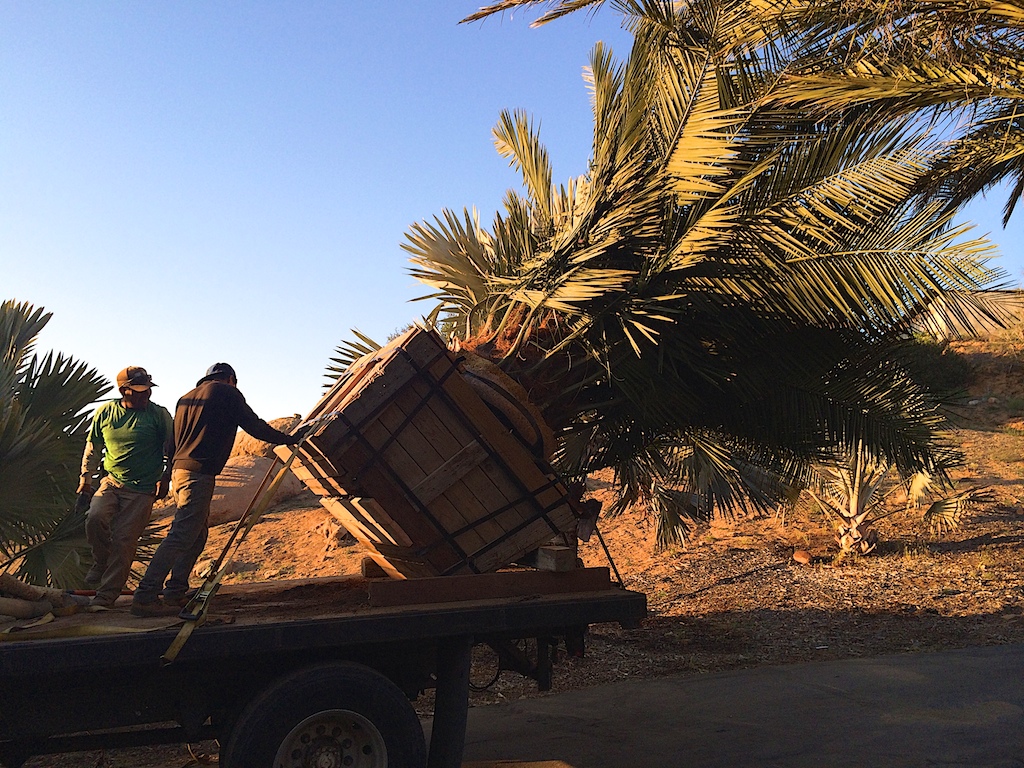 The next day started early, as I had a total of three palms to plant (I will do a blog post in a few weeks on the other two palms I transplanted).  I used Evan from Vista Tree Farm to side-box the palms and get them delivered to my house. Evan has done quite a few transplants for me and is very skilled in what he does. You can see great care was taken to ensure the palms arrived in mint condition. 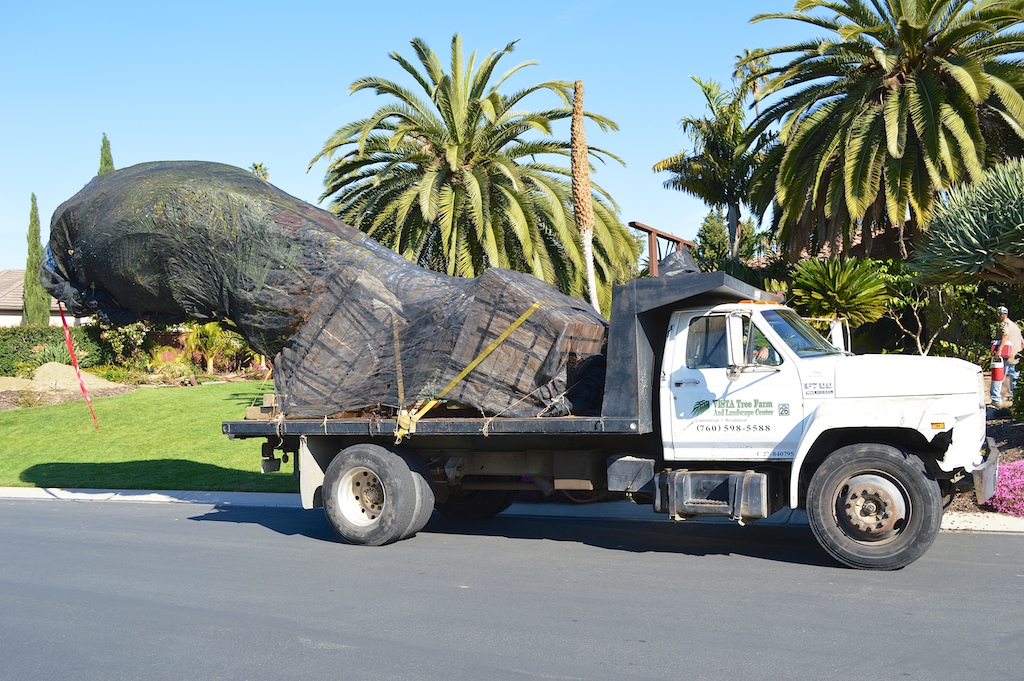 In order to get the palm off the truck we had to stand it upright. So with a strap around the trunk and a guideline to make sure the box was not flung forward, we stood the box up. 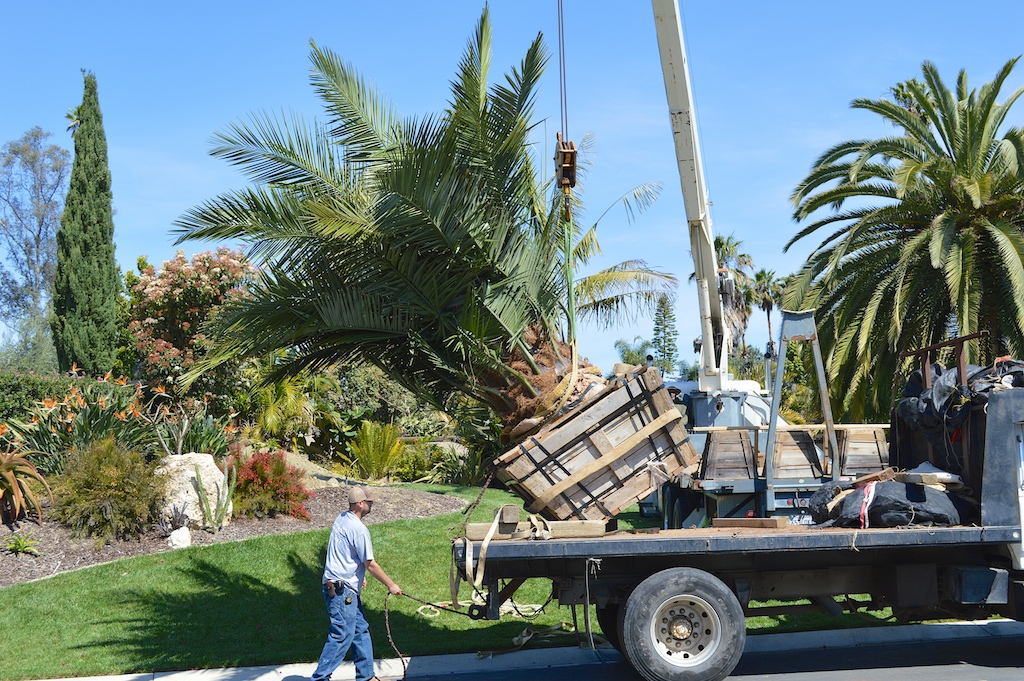 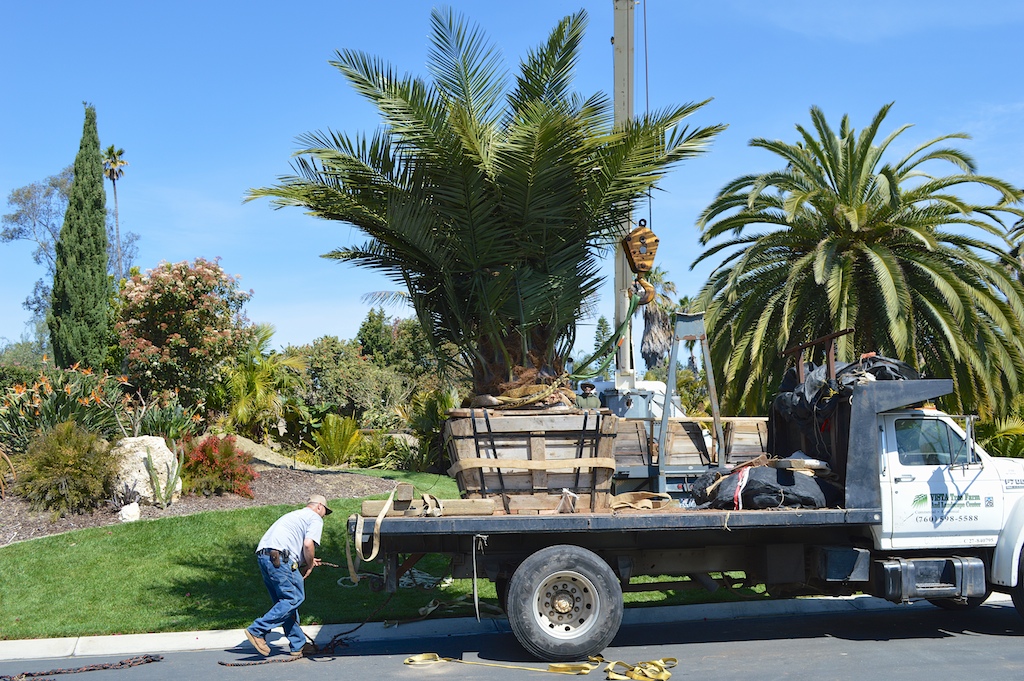 For the craning service I used Parkway Nursery, which is just a few minutes from my house. Tony is a master with the crane and has moved thousands of plants over the twenty years he has worked at Parkway. The guy is a character and is always good for a few laughs during the stressful endeavor. A sense of humor was needed, as the crane’s OSHA alarm was sounding, telling us the palm was well over the educated guess we took of 4,500 pounds.  A better estimate put the palm at around 5,500 pounds! 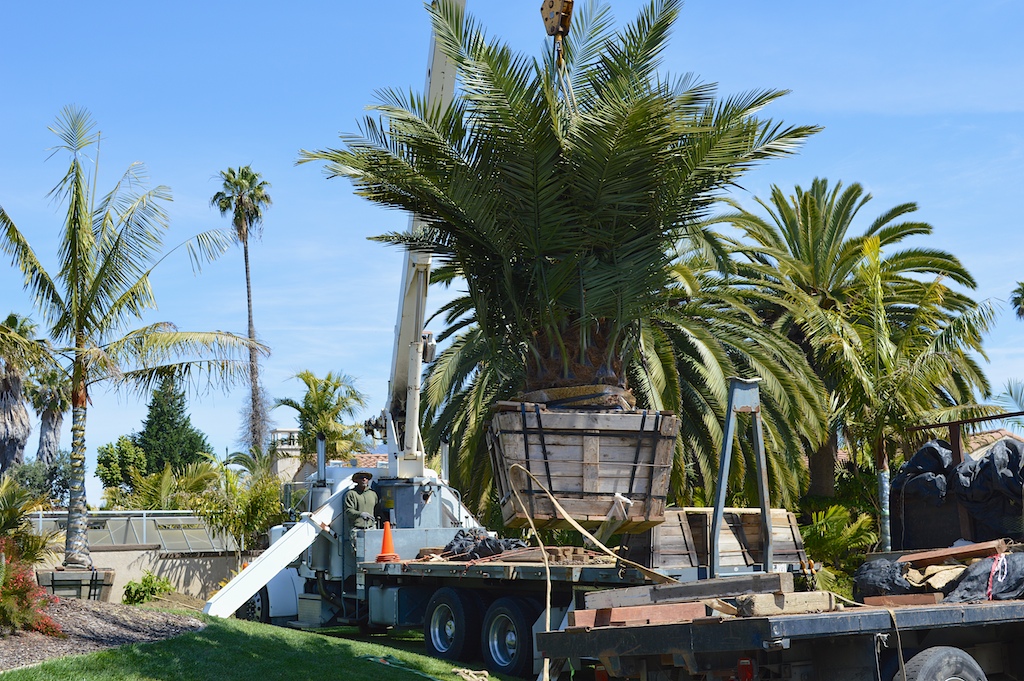 Once in the hole, the bands were cut and the box was disassembled with ease. We then began to back-fill and soak it in with a good watering. 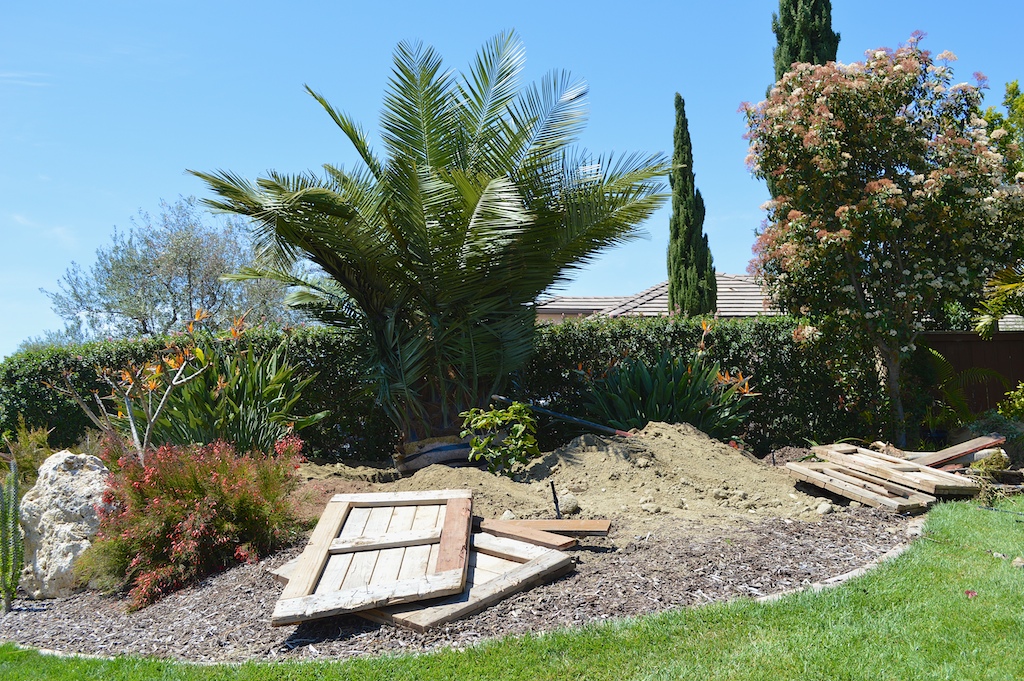 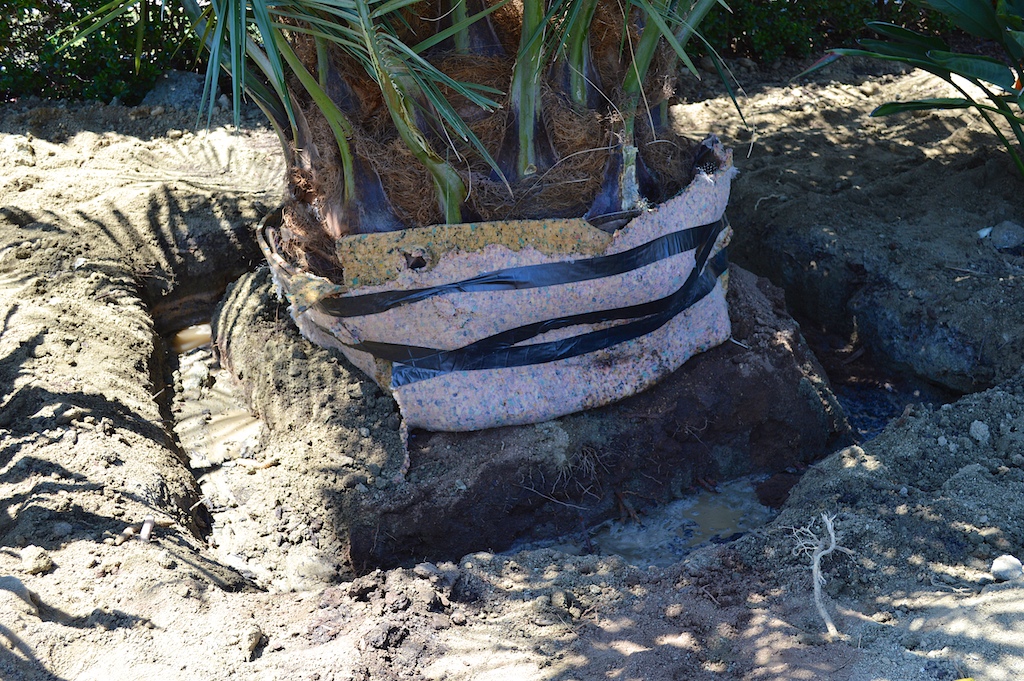 Here is my Jubaea chilensis in all its glory at its new home. This palm instantly becomes a focal point in that part of the garden. 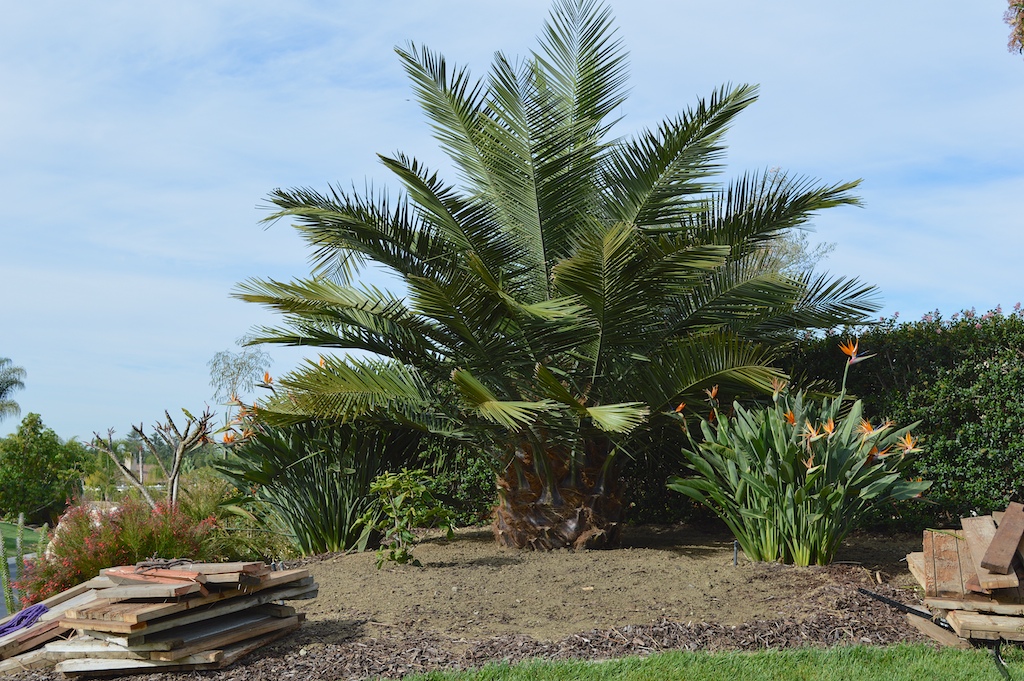 It took the place of my Enterlobium cyclocarpum. The tree below is only two years old from a small seedling. After seeing how large these trees get and how aggressively they root, I realized I needed something else in its place. I believe the Chilean Wine Palm did the trick. 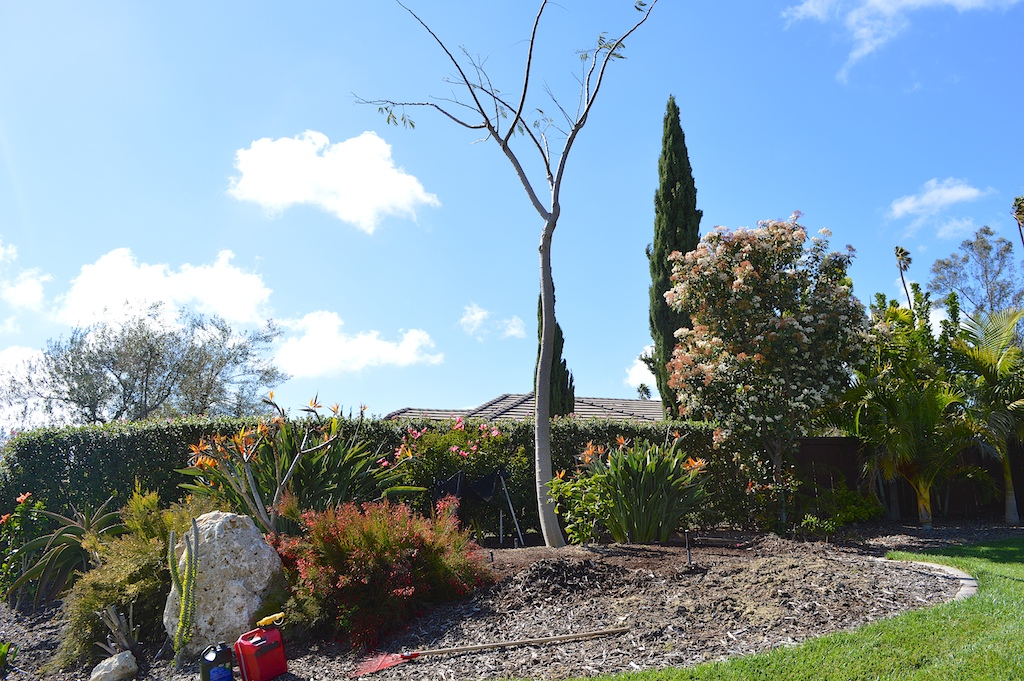 Because of the size of the Jubaea, I couldn’t crane it in from the street. So the crane had to pull onto my grass to set up. The result was massive tire marks in the lawn, broken sprinklers and lines, as well as a crushed drainage pipe. Nothing that couldn’t be fixed, but just another thing that adds to the cost.

Every time I transplant a large tree I say it is the last time. It truly is a lot of work and the cost always ends up being more than you budgeted for. But just like my wife after the birth of our first child, I too have long-term selective memory of the experience.