With the ever increasing popularity of water-wise gardens in Southern California, there is a similar increase in new plants available. The palette for gardeners increases almost daily. One plant that has been around for a while appears to me to be unjustly absent from that palette of many of these new water-wise gardeners. It is a plant that is very hardy, does well with little water, looks great year-round and is a real show-stopper when grown well. The plant is Dudleya brittonii and it needs to be planted more often. Hopefully this post will convince more gardeners to find it and plant it. 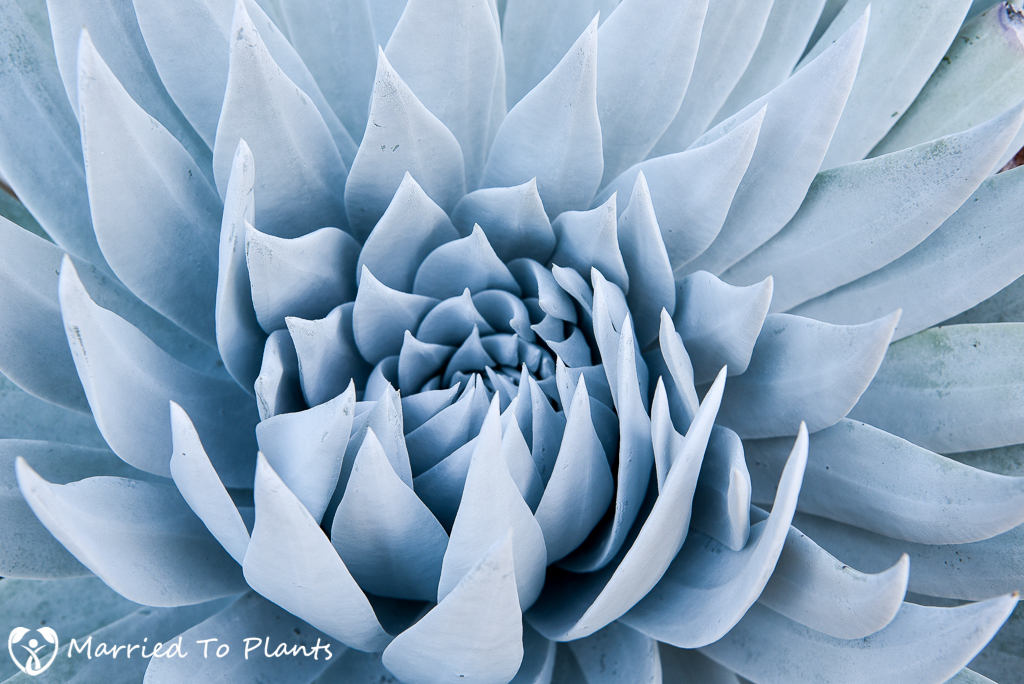 The genus Dudleya contains about 40 species. Mostly found in California, some can be found as far north as Oregon and down into Arizona and Baja California. Dudleya brittonii is native to the Pacific Ocean side of Baja California and can be found growing on cliffs and hills between Tijuana and Ensenada. One thing that is always consistent when found in habitat is that Dudleya brittonii (Giant Chalk Dudleya) can only be found growing in well-draining soils. Knowing this is key to its success in cultivation.

The majority of the plants in the genus Dudleya are not ones that will end up in a cultivated garden. Frankly, some can be quite ugly and many only look good in wetter months. A plant often confused with Dudleya brittonii is California native Dudleya pulverulenta. In habitat, like Dudleya brittonii, Dudleya pulverulenta defies gravity by hanging onto cliffs. It is an excellent example, however, of a Dudleya that looks great in winter but shrivels up and brown tips in the summer. 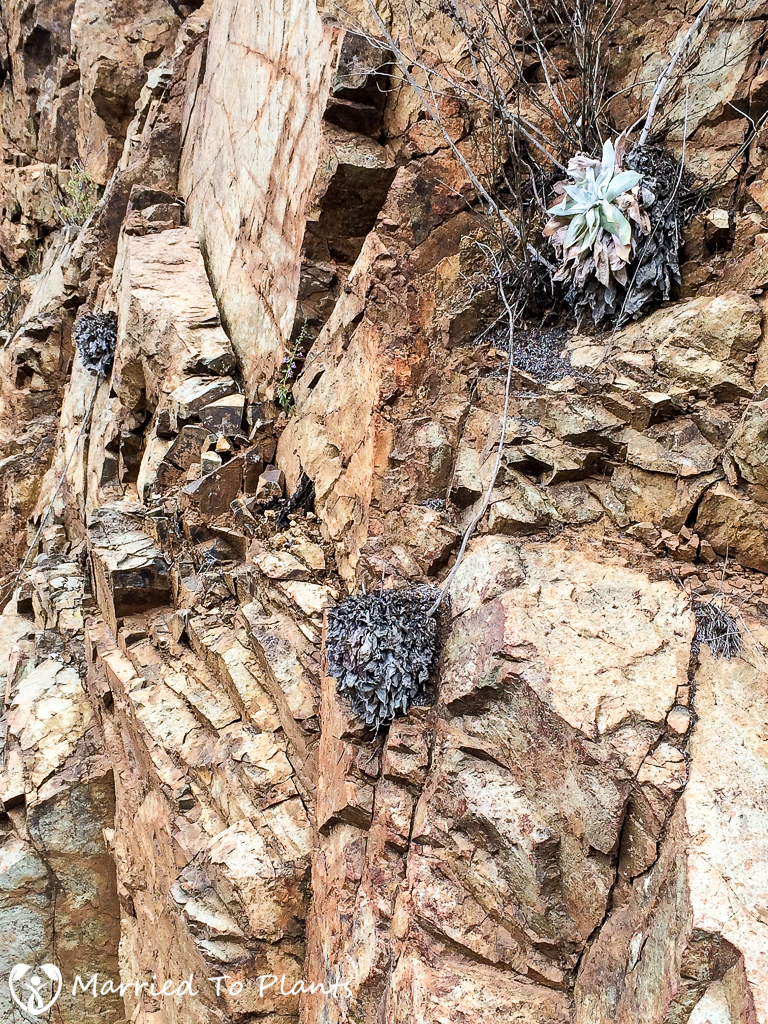 This Dudleya pulverulenta actually looks pretty good for this time of year. However, even in a garden with water and fertilizer, they go dormant like the one below. Only a diehard California native plant gardener could find this something they want to have in their yard year-round. 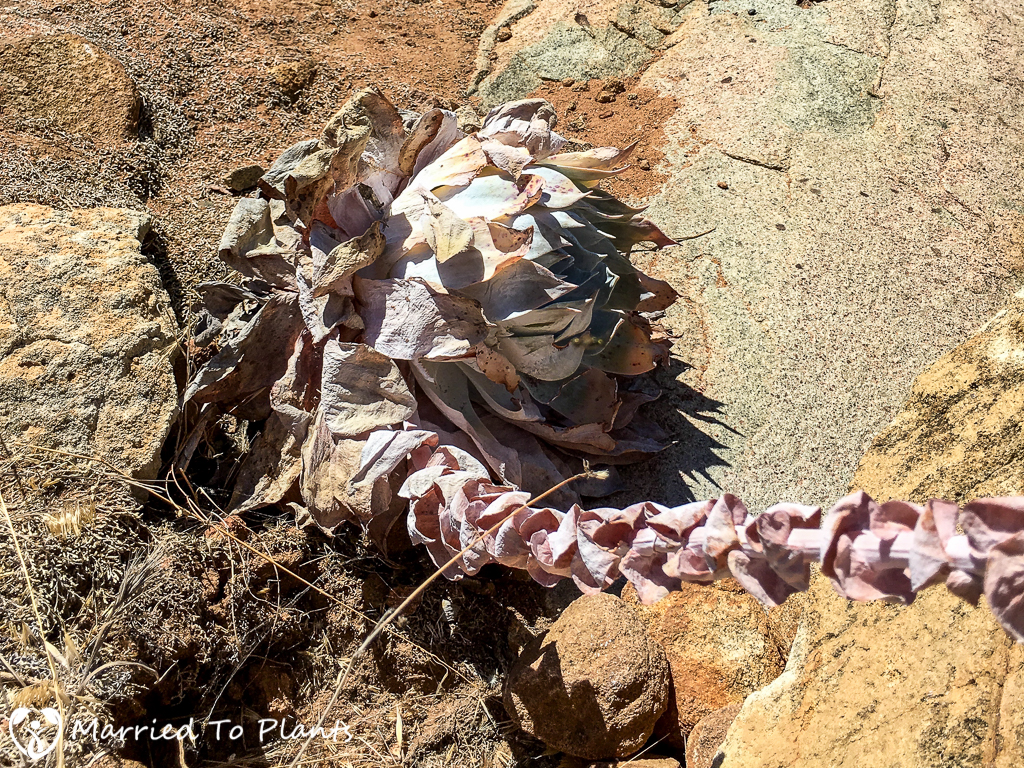 There are two forms of Dudleya brittonii: the rarer green form which lacks the white powder on the leaves (and I don’t grow), and the more cultivated chalky-white colored form. It is this form that, when well grown, will create such a beautiful rosette of white leaves that they will actually glow under a full moon. Something interesting about this white coating seen below is that it gives Dudleya brittonii the highest measured ultraviolet reflectivity of any plant in the world. 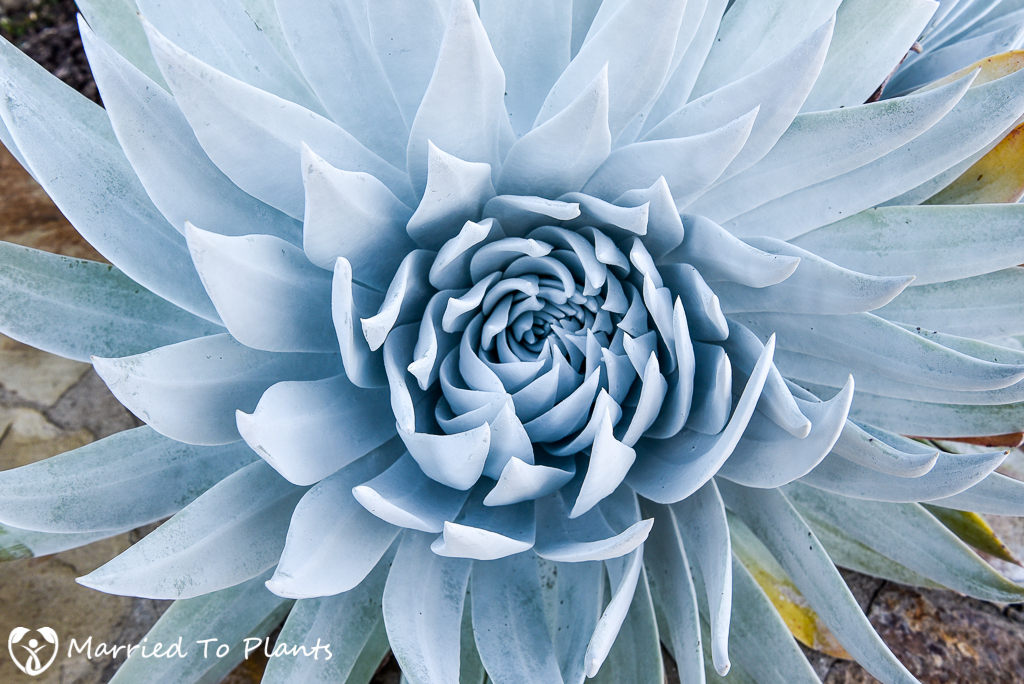 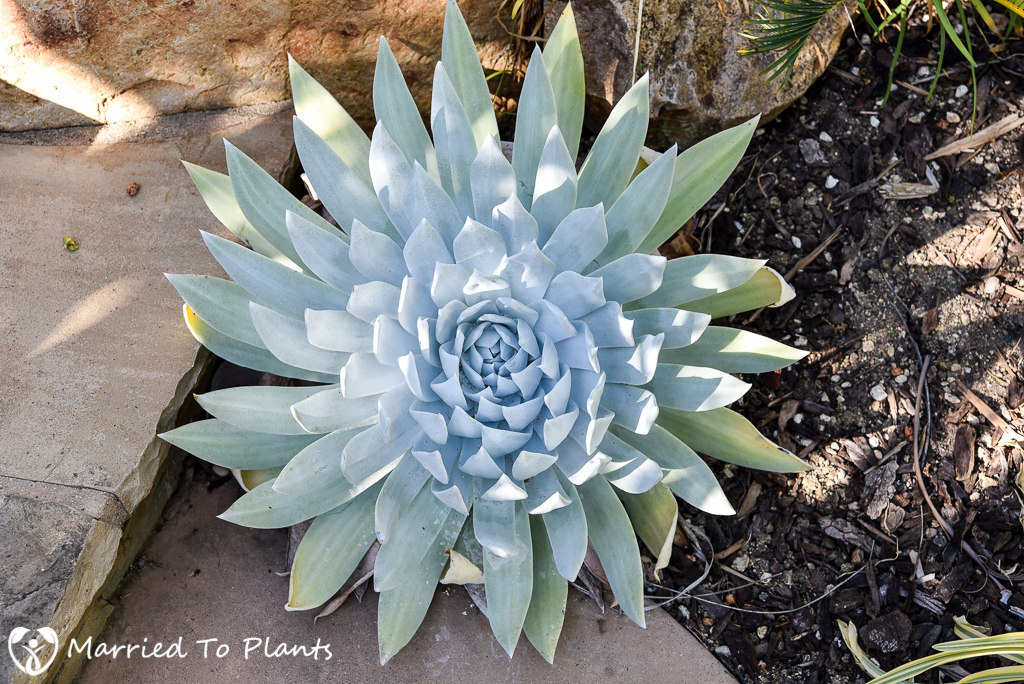 When planting Dudleya brittonii in the garden, some care must be taken. Foremost, you need to plant it in well draining soil. Mine are growing in pure decomposed granite. In this soil I am able to water them 3 times a week in summer and once every 5 days in winter. This is the same watering all my plants are on in my garden. They can receive more water than most people think, and they actually appreciate it.  Second, you want to avoid overhead watering. These plants can handle overhead watering if grown in mostly sun. The real reason to avoid overhead watering is because you don’t want the white powder to wash off. After a good rain you will find a bunch of the powder around the base of the plant. Overhead watering can do the same. Third, ideally you want to plant them away from places where it can get damaged by people brushing against the leaves or away from people that will want to touch the plant. Dudleya brittonii leaves snap easily and the white powder does come off without much effort, leaving finger prints on the leaves. The good news is that the white powder does come back over time and the plant will once again regain its full glory if allowed to. Fourth, they want a little reprieve from full sun. An ideal location will give them 1/2 to 2/3 day sun.

My placement in the garden is always against some rocks, away from overhead watering and along a planter bed border. For me this provides the best way for Dudleya brittonii to luxuriate and reward me with its beauty. Of course I do risk damage that my young children can cause running or biking by them so close to the walkways. So I am not even following my own advice from above. 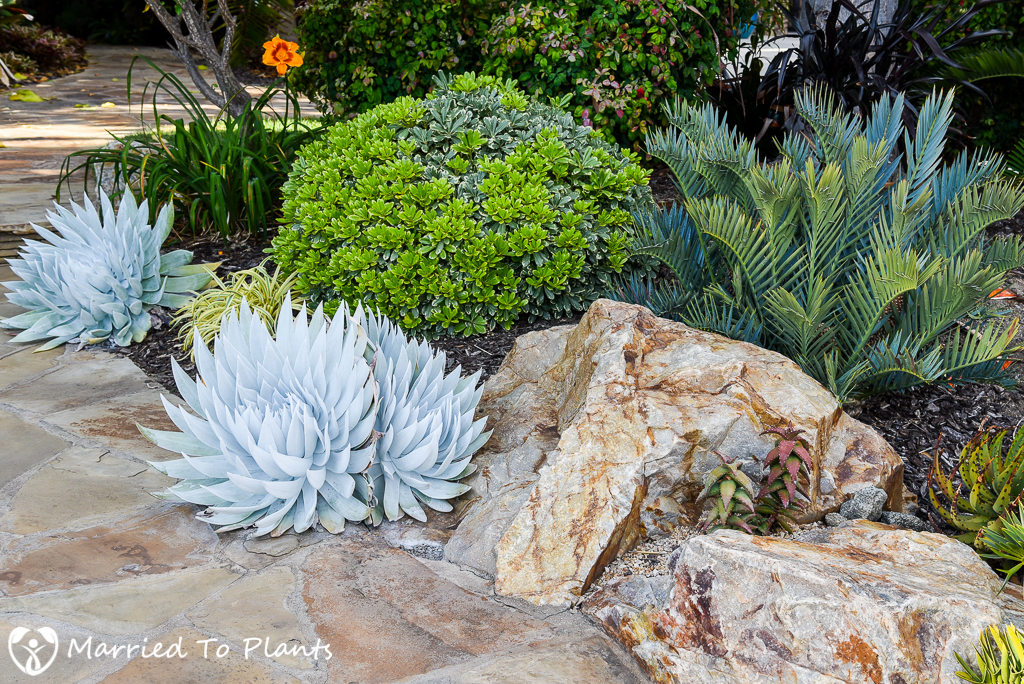 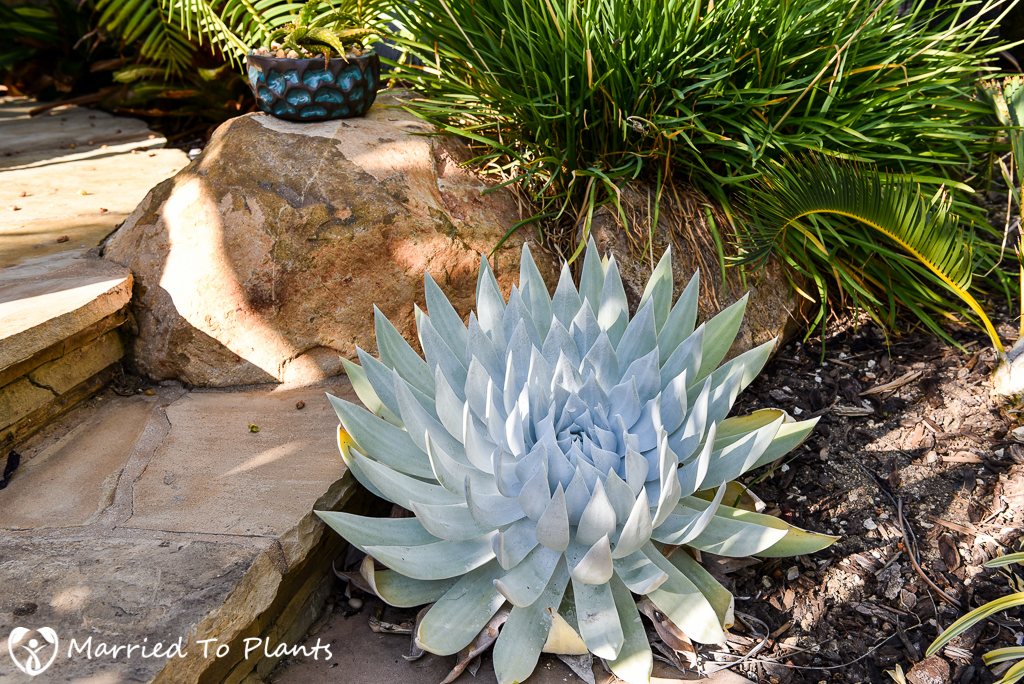 The books say that the rosette can grow to 12 to 18 inches wide. I can confirm it can grow larger. This one with my favorite beer (wish they would sponsor me) for scale was measured at just over 24 inches wide. 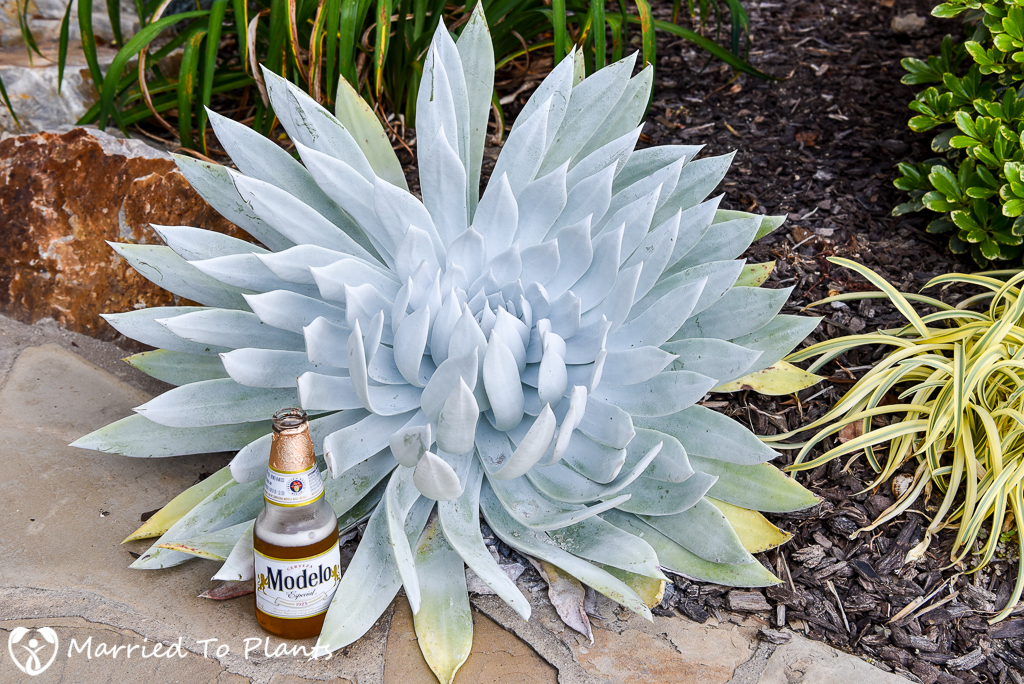 Most books or online sources will also tell you Dudleya brittonii remains solitary. That too is not true. Given time and proper cultivation practices, they will branch – eventually forming gorgeous mounds. The one below has 3 rosettes and a base that is as thick as my leg. I clean out most of the dead leaves and I also remove additional new growing points that emerge, as I like the clean look of 3. 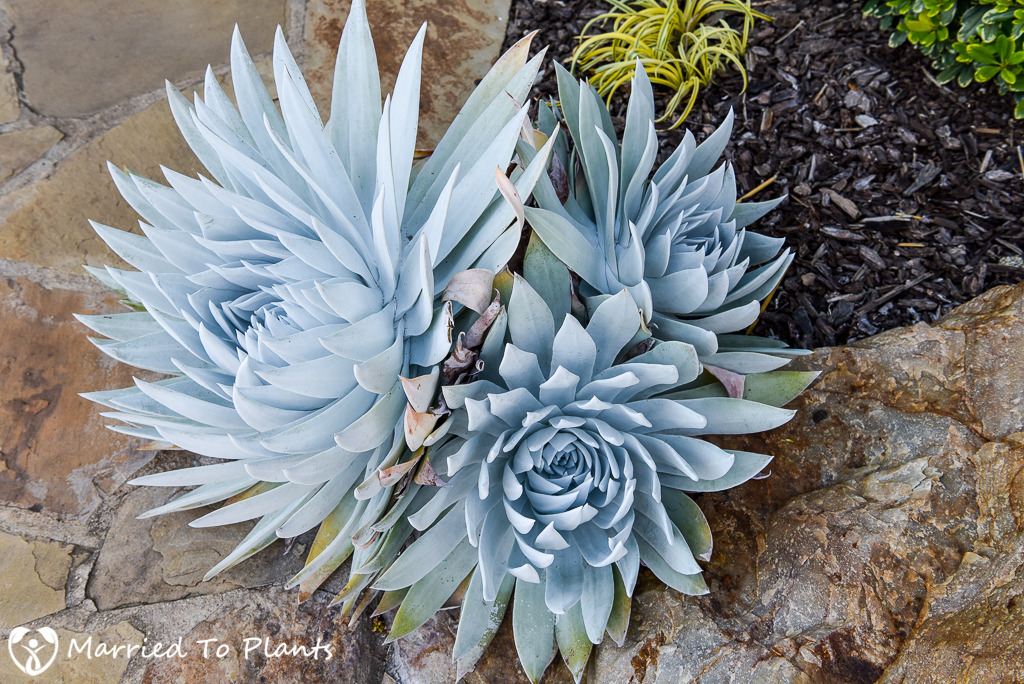 Dudleya brittonii is a spring to early summer flowering plant. During that time of year it will send out 1- to 2-foot tall, red-stalked flowers from its sides. In plants like the one I showed above with the beer for scale, those flowers can be numerous. I counted 20 flowers on that plant this year. The flowers last a few months before falling to the ground next to the plant. If you do not like the flowers, just cut them off at the base when they emerge. The photos below show the same plants above in flower. You will notice the rains has washed off a lot of the powder. 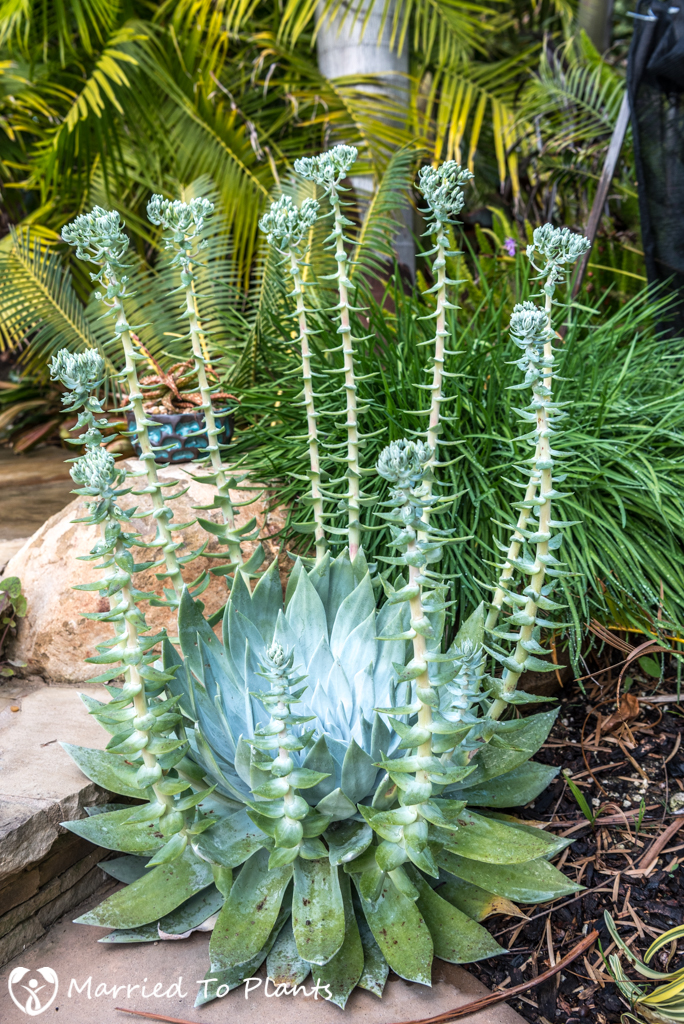 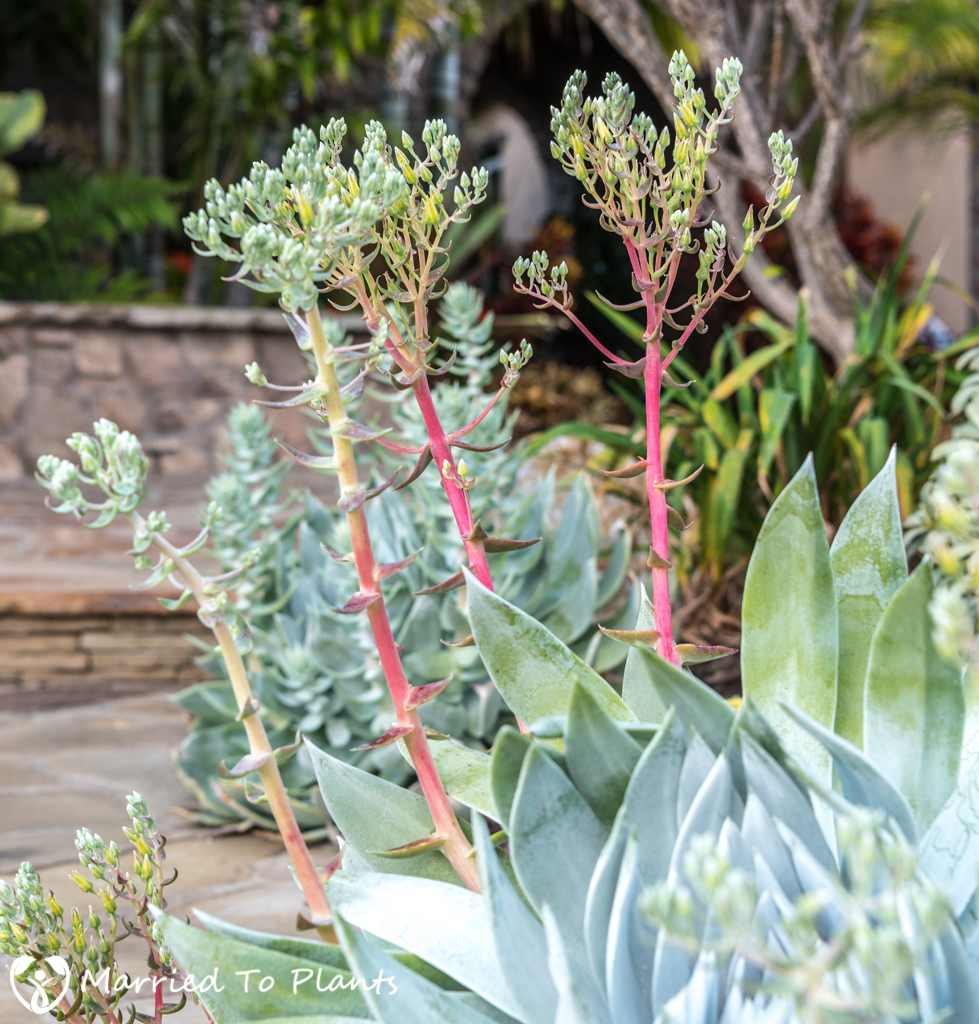 You might have noticed the two flowers appear different. I am not sure why that is. You can see the comparison below. 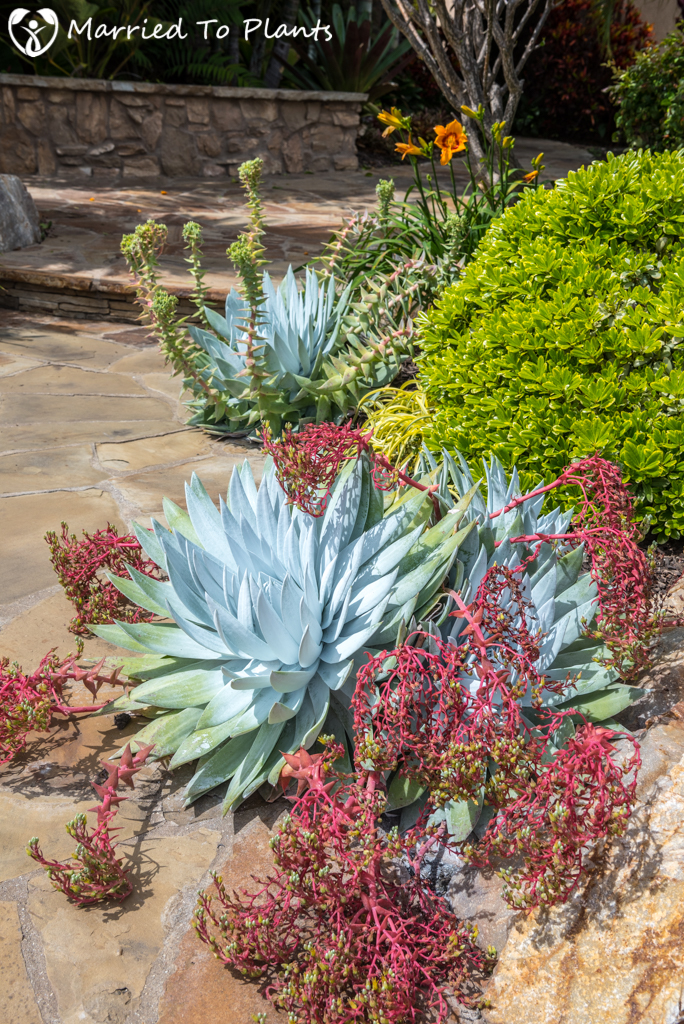 Dudleya brittonii will do well in a container if you must. However, nothing beats them planted in a well-drained rock garden. Next time you are out shopping for a new water-wise plant for your garden at your local speciality nursery, try and track down one or more Dudleya brittonii. Plant them as suggested and you surely won’t be disappointed. 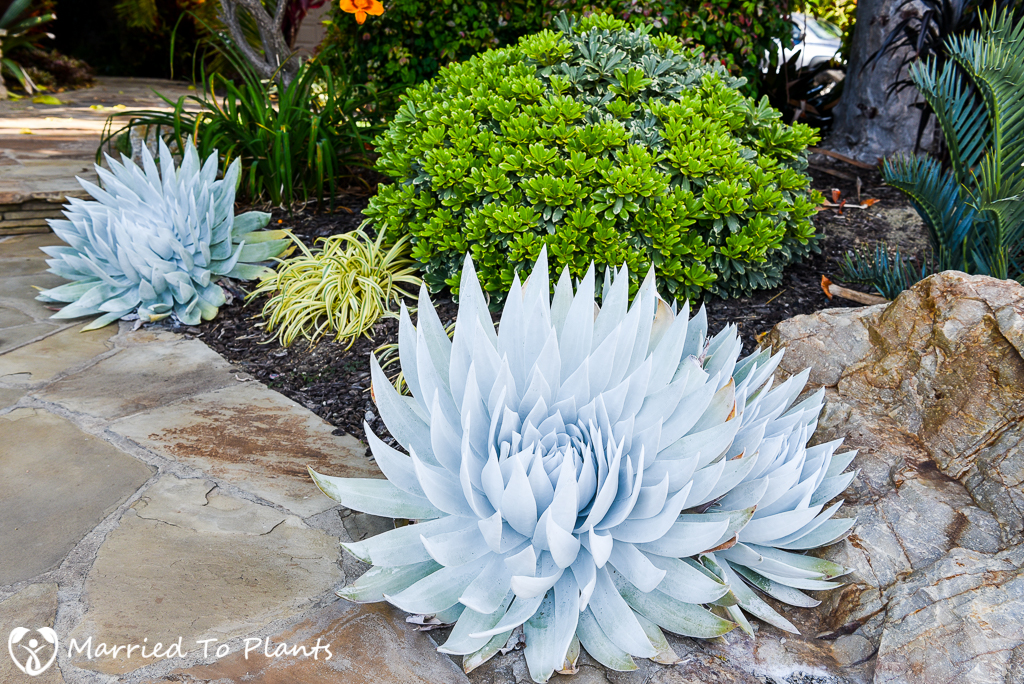 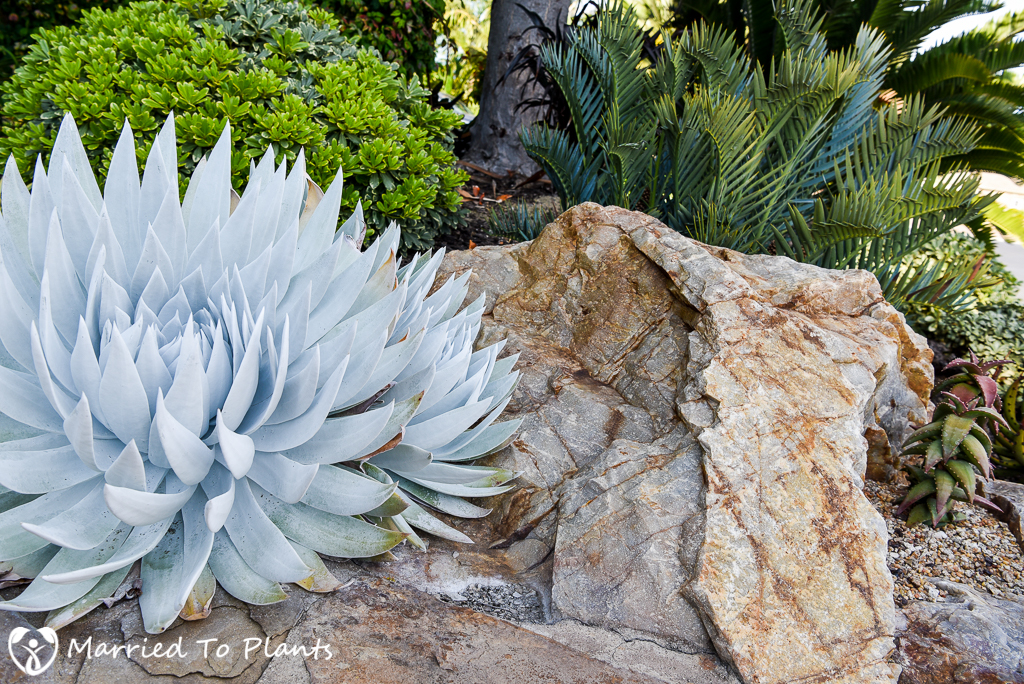