While aloes have been planted in Mediterranean climate gardens for centuries now, they have started to explode in both abundance and variety thanks in part to homeowners’ desire to plant more water-wise plants in their gardens. Here in Southern California we have seen water shortages lead to large water rate increases. With the current drought showing no signs of breaking, it will only push more homeowners to rethink water use in the garden. So aloes will only continue to gain in popularity.

While aloes can thrive on neglect and limited irrigation, I have found they can be just as adaptive to traditional gardens when given a sunny, well-draining location. Just one of the reasons I find aloes to be a great addition to the California Fusion garden style I am working on. Another reason I find aloes so enjoyable in the garden is the timing of their blooms. When most plants are at their worst in the dead of a SoCal winter, aloes are at their pinnacle. Aloes in bloom steal the show with their cold-weather flowers that come in almost every color of the rainbow. This post will show off some of the aloes in bloom right now in my garden.

Aloe barberae is the largest aloe in the world, forming a monstrous tree when given time and water. Mine is still a baby. The flower color is a little muted compared to other aloes in my garden, but this is the aloe that gets the most admiration year-round from visitors. Size matters. 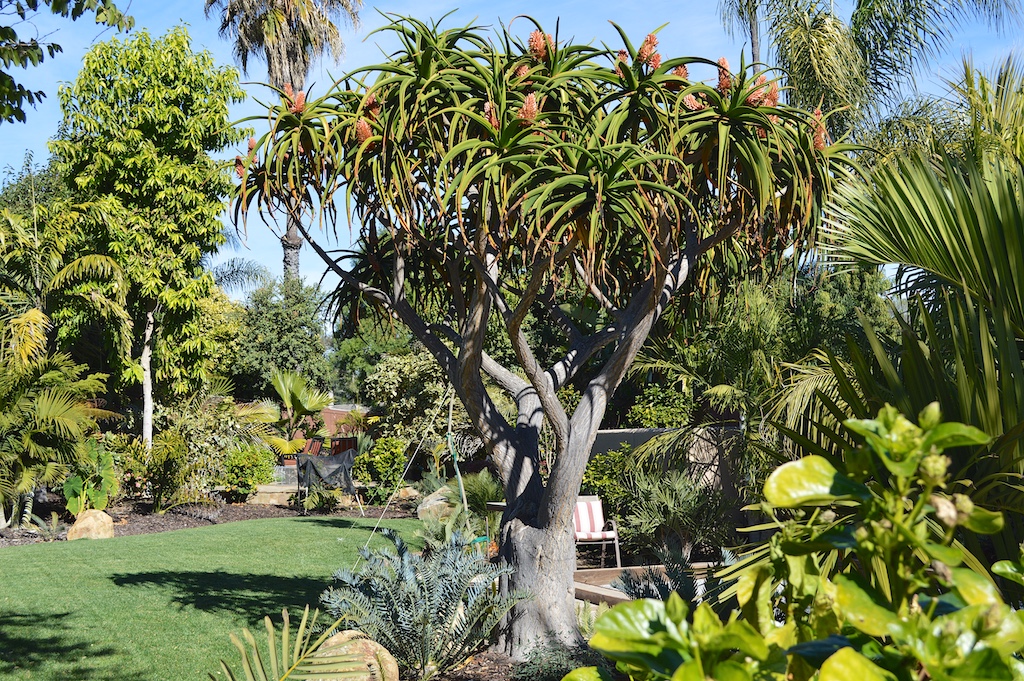 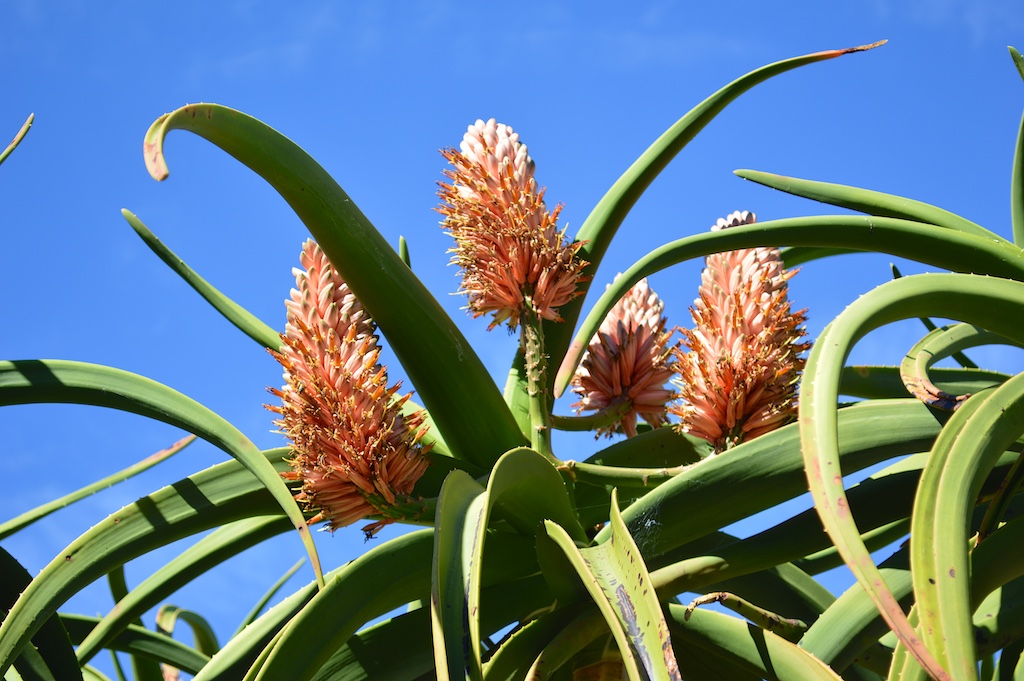 Most likely my favorite overall large flowering aloe. Aloe vaombe from Madagascar appears to be on fire while in bloom. Aloe vaombe doesn’t branch but still grows into a large, tall plant. So give it some space. 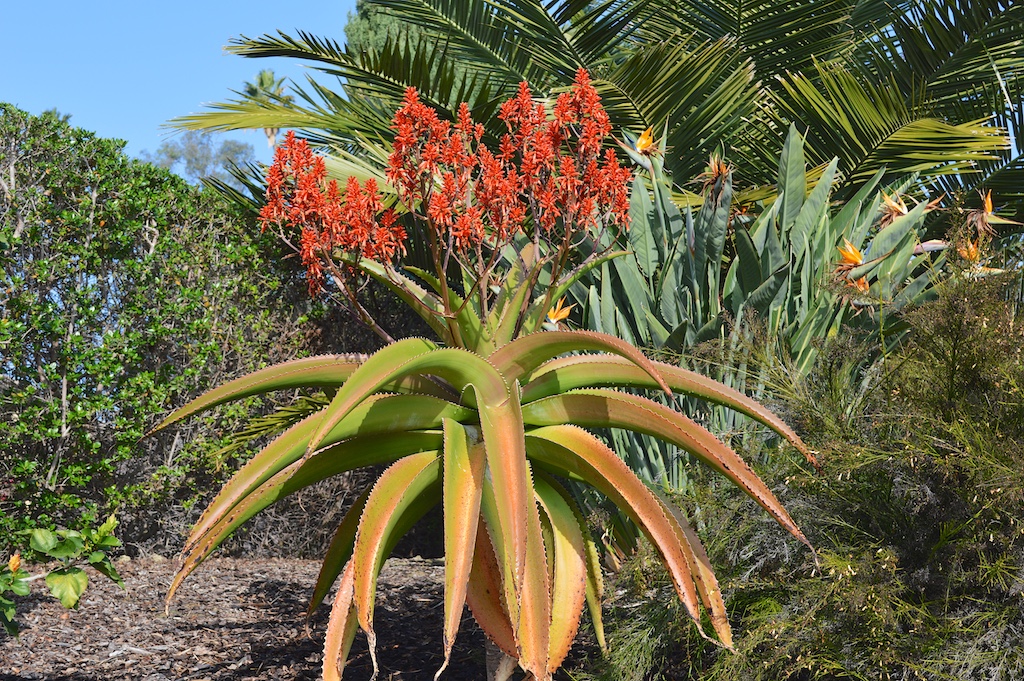 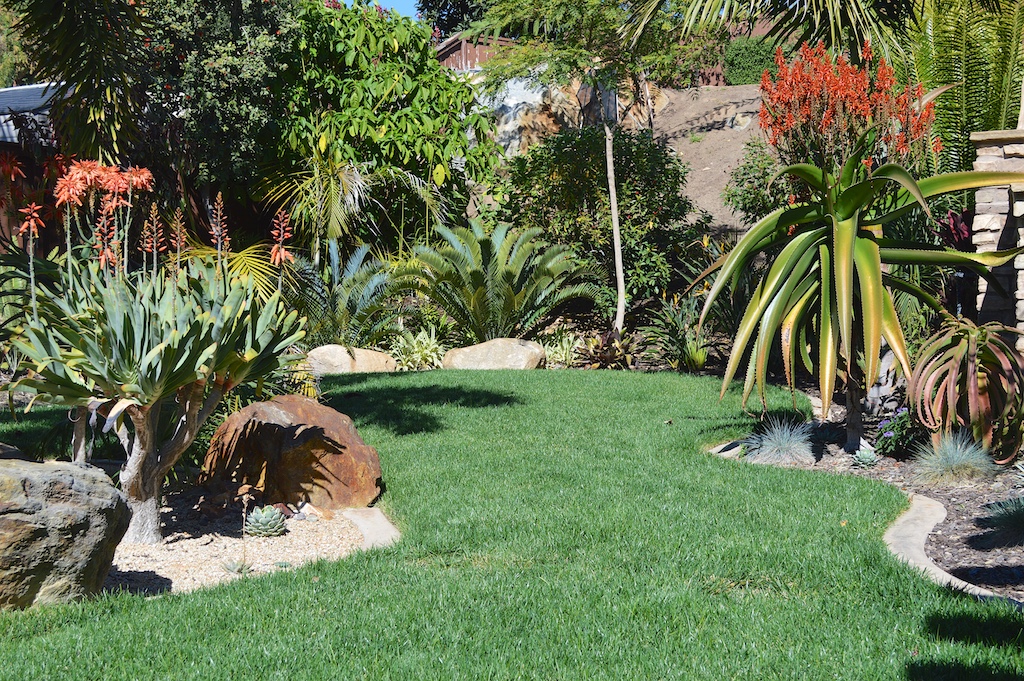 Aloe thraskii is one of the more common stem-forming aloes. The pale-green recurving leaves plus a yellow- to orange-colored flower are the reasons why. It is also an easier one to grow, as it can handle some shade and more water then many other aloes. 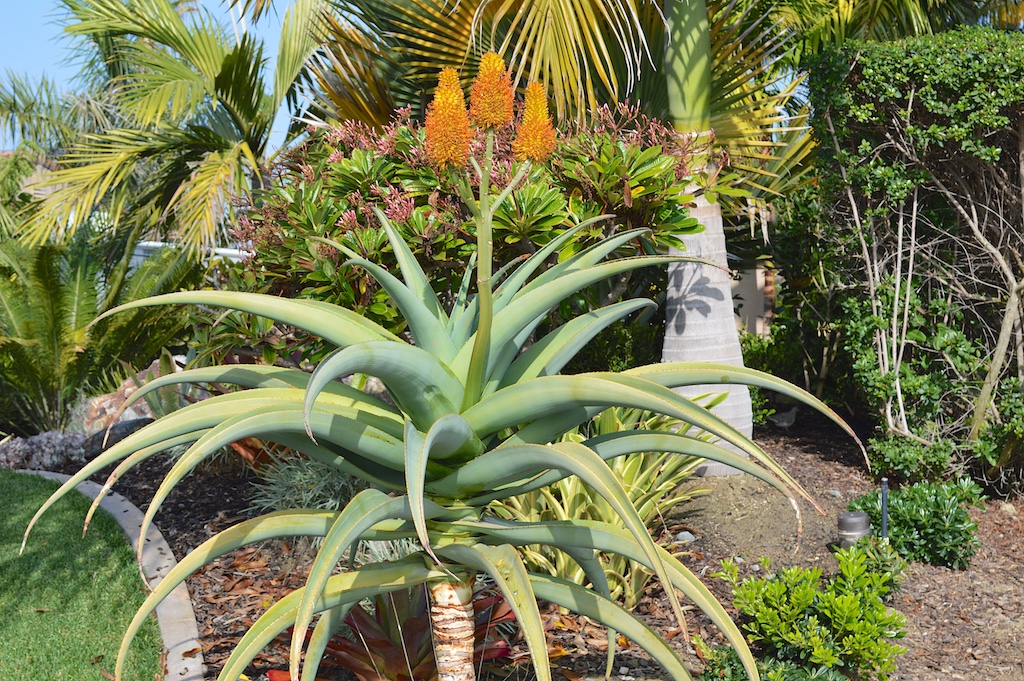 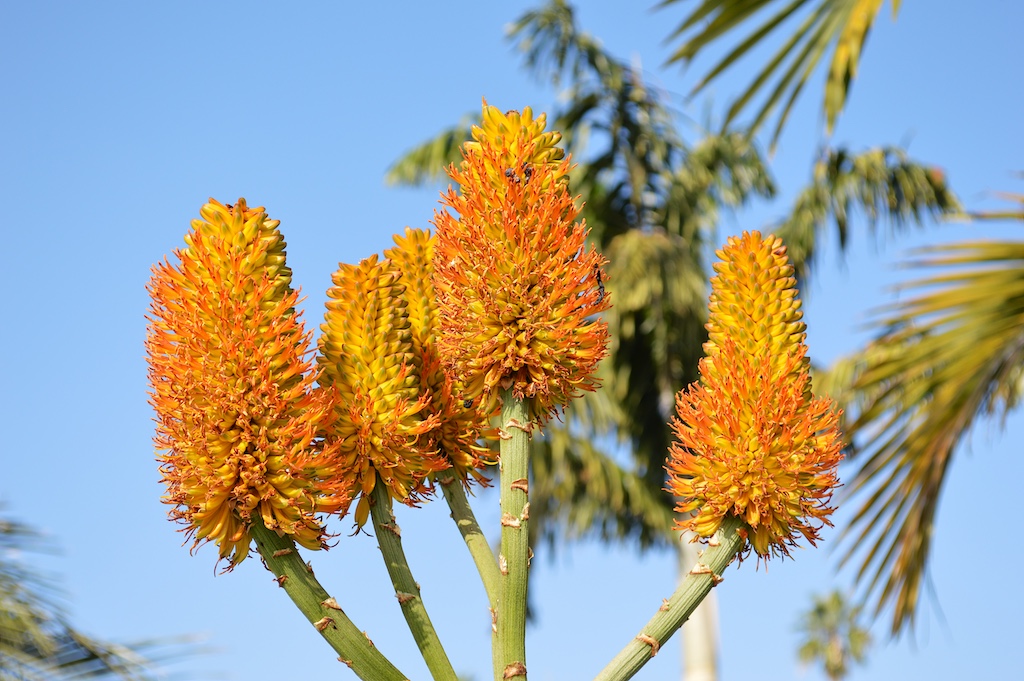 Aloe speciosa is another popular plant found in most aloe collectors’ gardens. The blue-green leaves and the bi-color effect of the flower make this a must grow. The common name is the “Tilt-head Aloe” and you can see why below. I have seen the head of this aloe tilt to 90 degrees on some plants. 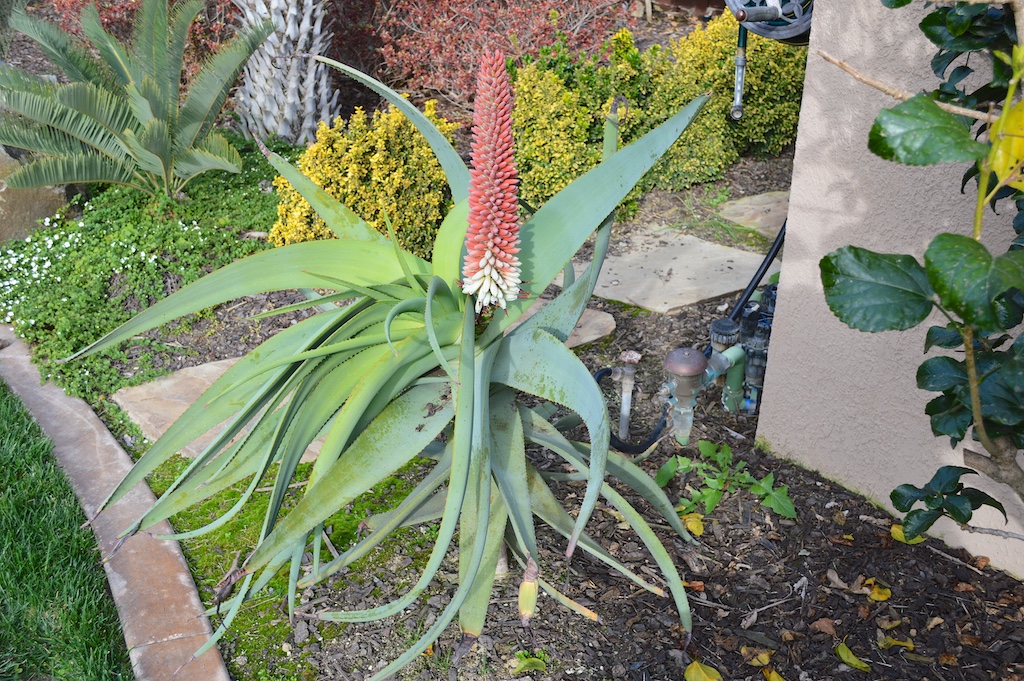 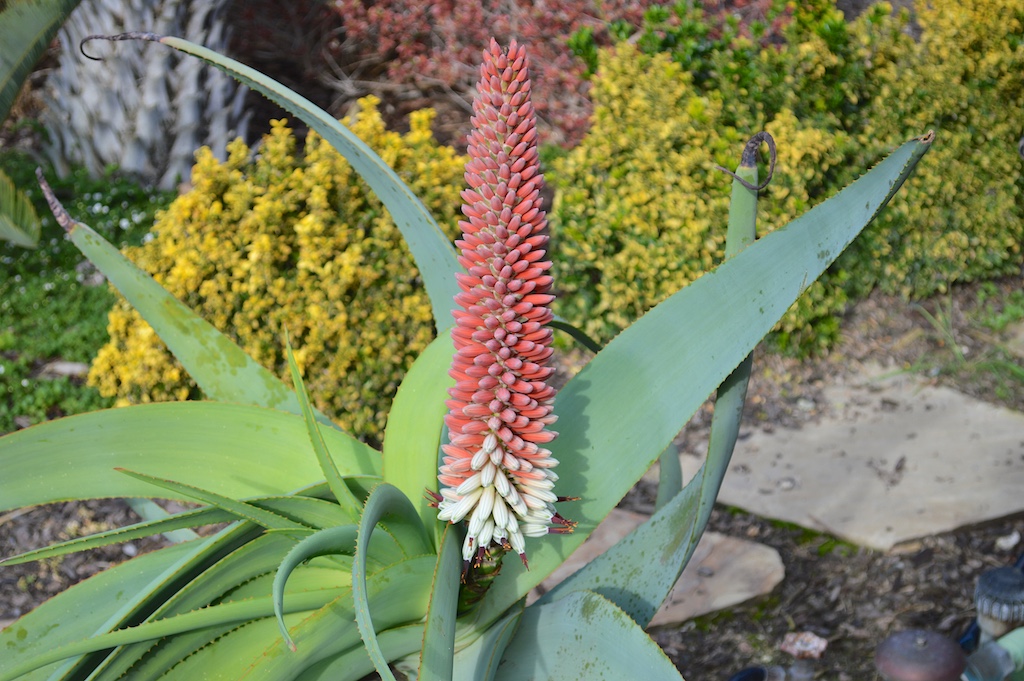 Aloe munchii is a little less common than the plants above and also one of the smaller of the stem-forming aloes. Mine is blooming like crazy this year. Most likely due to the fact the head has branched into three new heads! 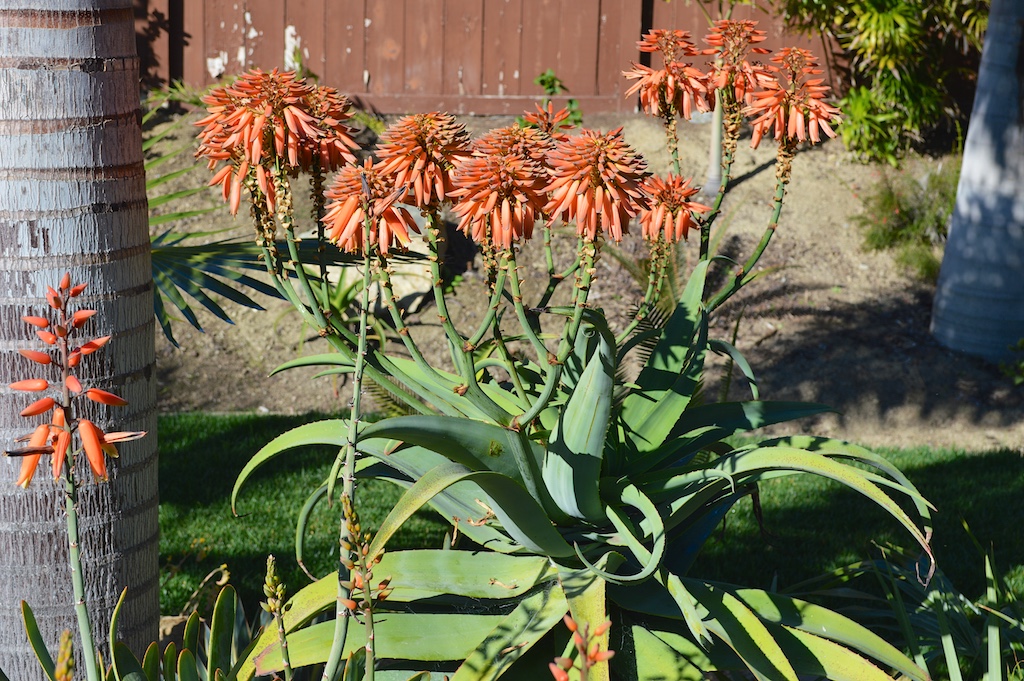 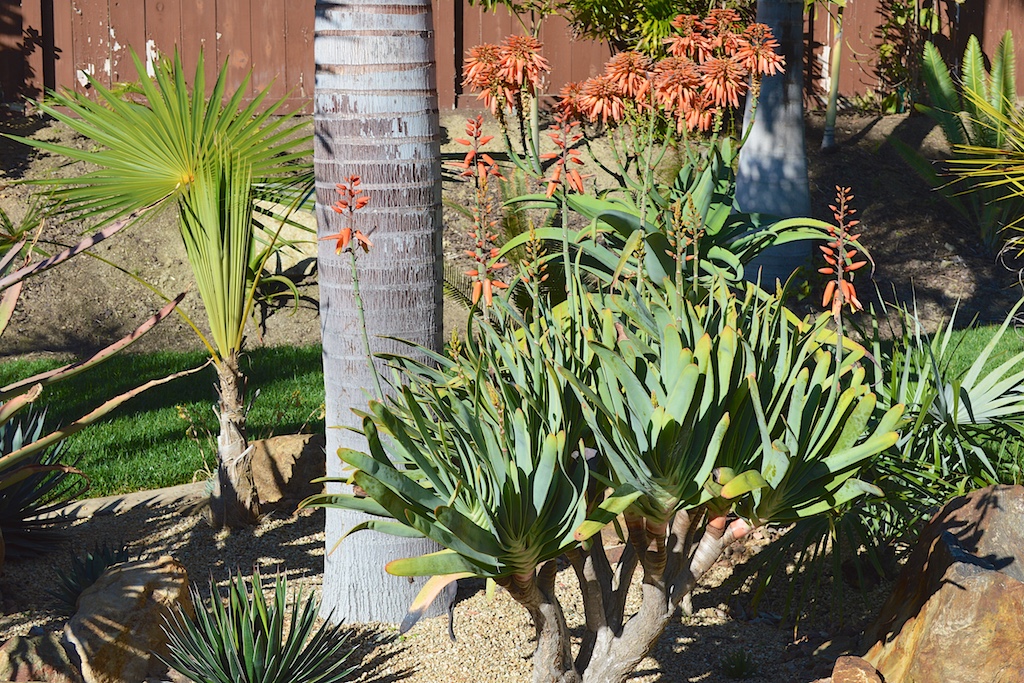 Aloe ferox is usually seen as a red-flowering aloe. This much rarer white-flowering Ferox is a recent addition to the garden and it certainly didn’t waste any time blooming. 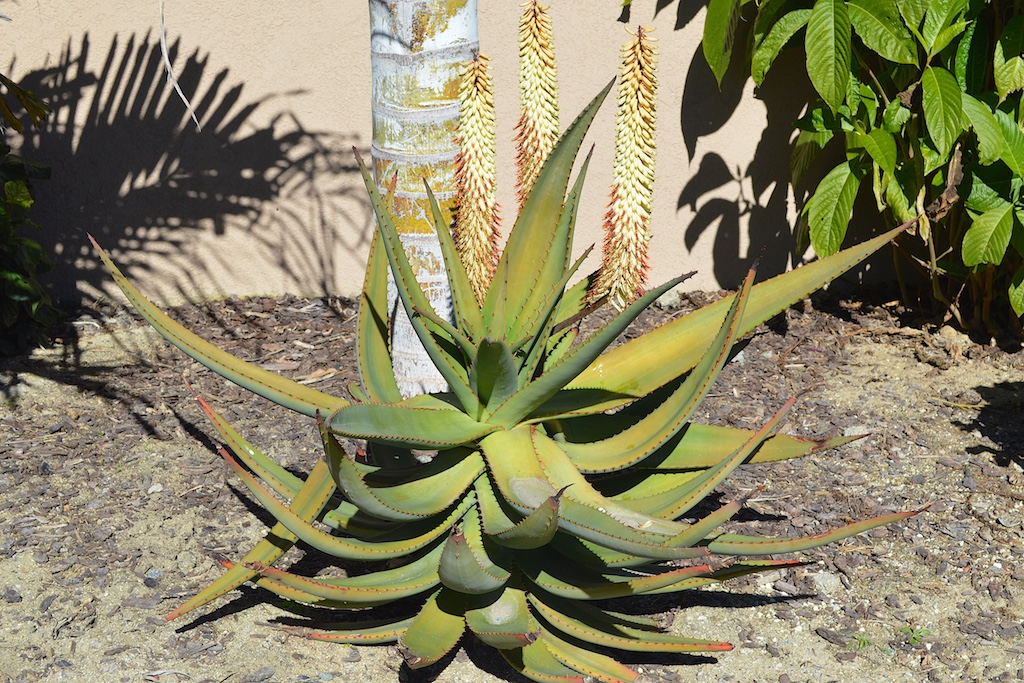 The next four aloes are all quite similar to each other when not in flower. However, when they are blooming it is easy to differentiate them. All four are classified as nearly stemless and are smaller in stature than the plants found above. Since all four come from Madagascar, you know they will be awesome. First up is Aloe capitata. 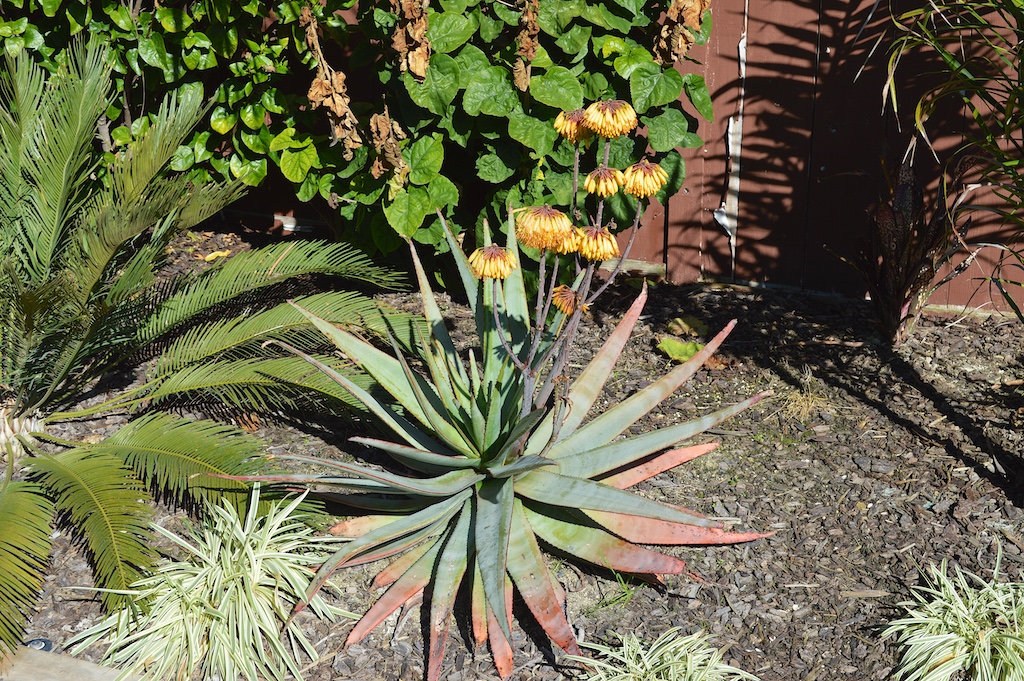 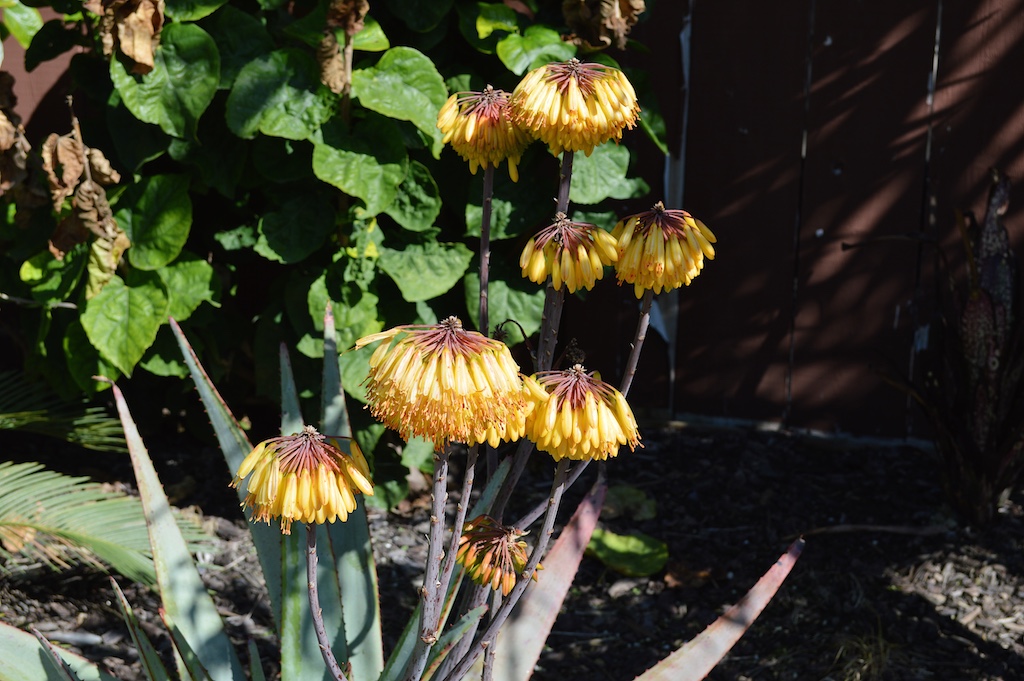 Tall, erect, cylindrical racemes identify Aloe betsileensis from the capitate flowers of Aloe capitata. I love the dull silver-green leaves with reddish margins on this aloe. 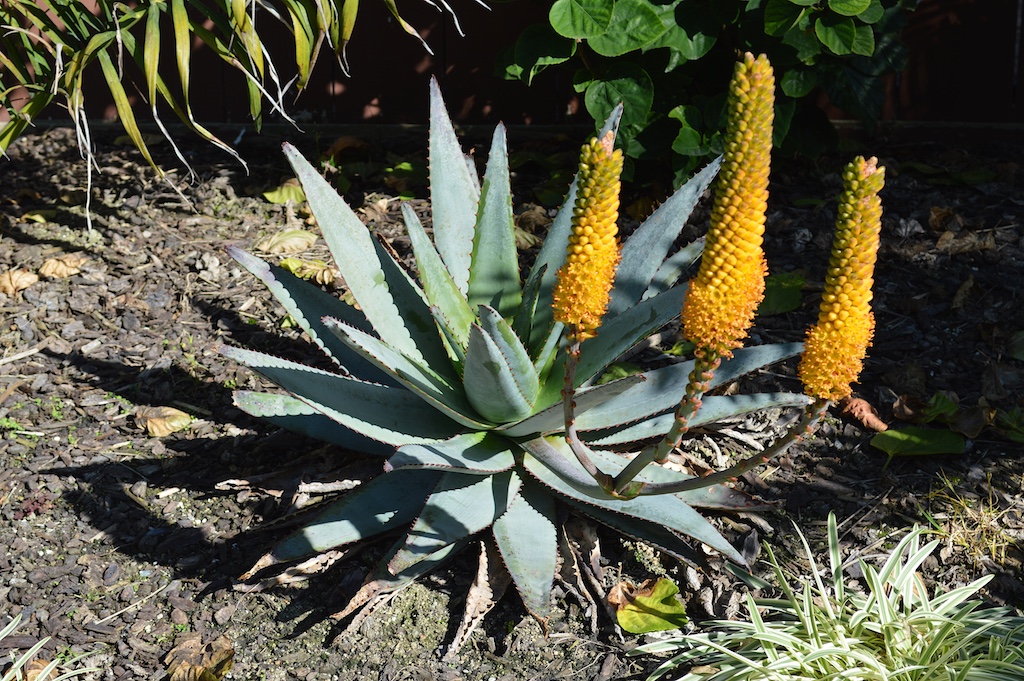 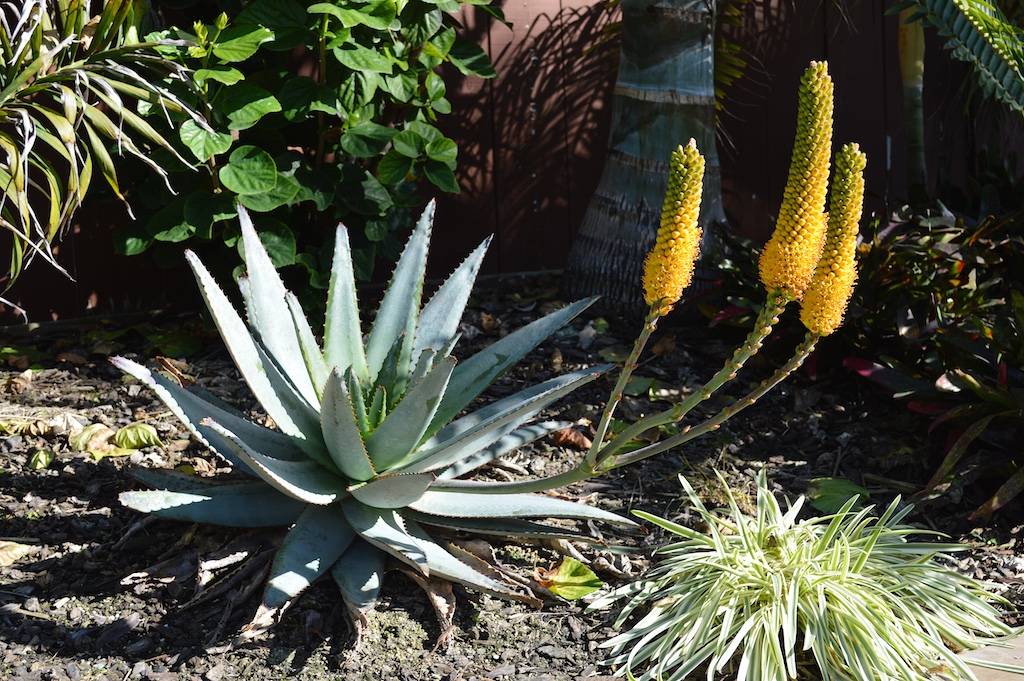 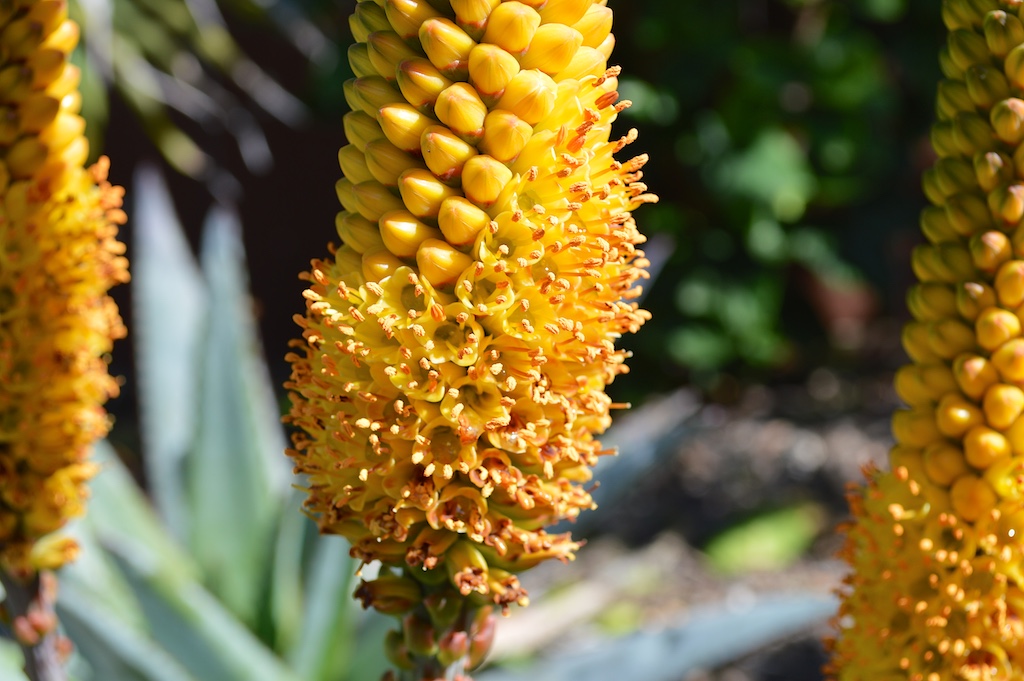 Aloe conifera is showing off its first bloom ever in my garden. It is almost indistinguishable from Aloe betsileensis when not in flower, except for the characteristic that Aloe conifera is usually the smaller of the two plants. A key identifier when both are flowering is that Aloe conifera’s inflorescence bracts are prominent and conceal the flower buds. Basically, it produces a cone-like flower head, from whence it gets its name. This can be seen clearly in the third picture below. 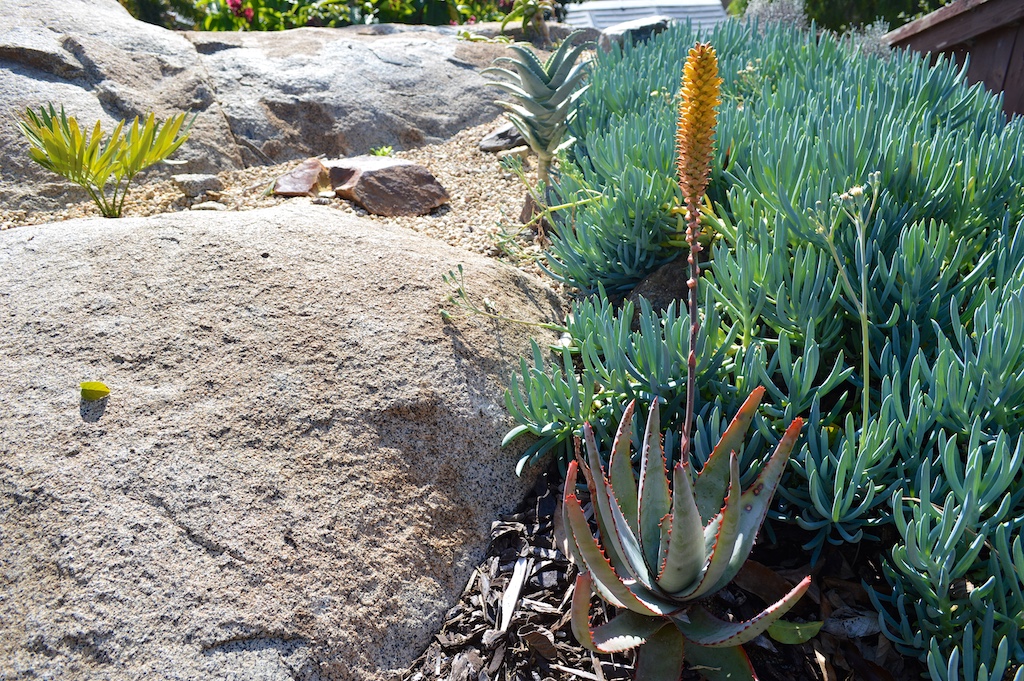 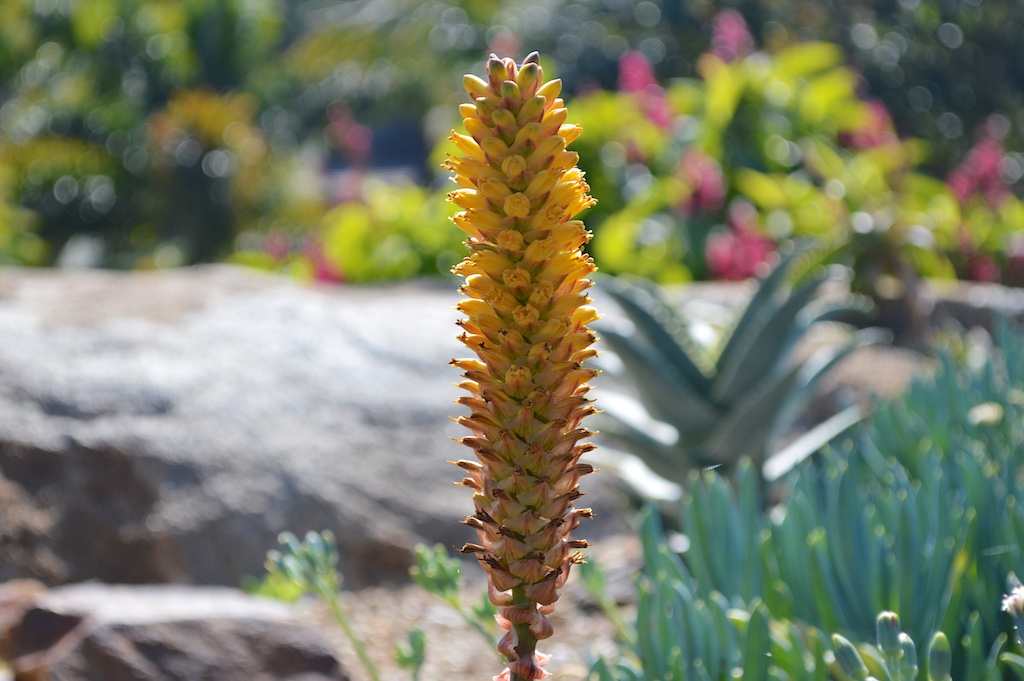 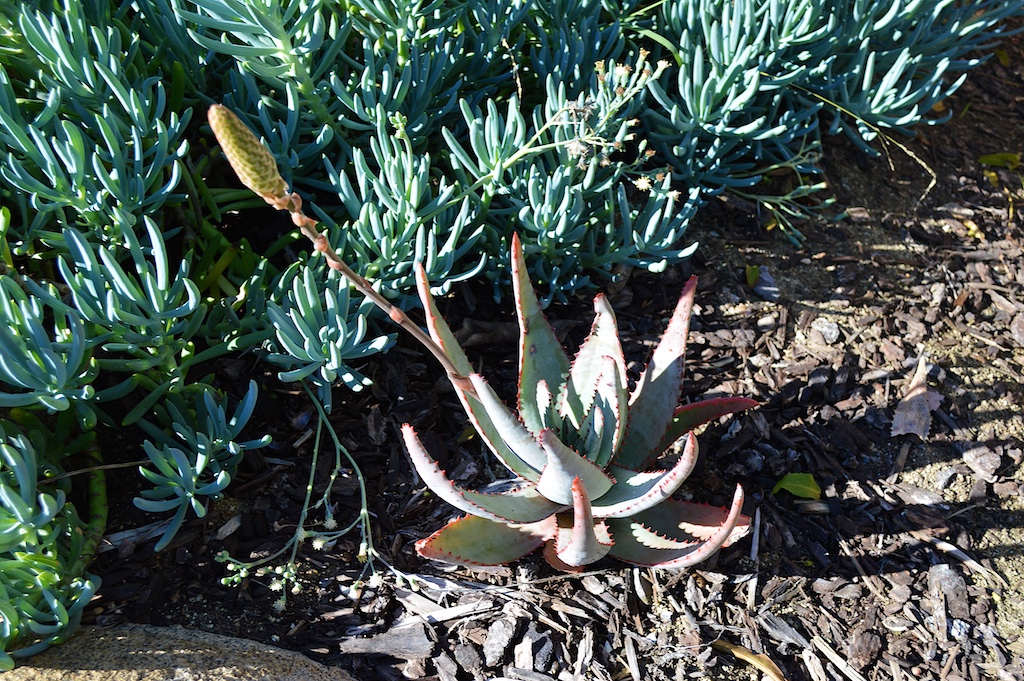 And now to close with my favorite of the four—Aloe andringitrensis. This is currently a rare aloe to own, and like Aloe conifera, it has flowered for the first time in my garden. The floral display will only get better with age, as will the plant’s color now that I cut out a Cordia lutea that was shading it the last two years. Aloe andringitrensis grows almost at the top of Madagascar’s second tallest mountain on Peak Boby in the Andringitra National Park. I will be making a 2-3 day hike on my October trip to Madagascar. I can’t wait to see this plant in situ. Growing at 7,000-8,000 foot elevation should make this a good cool weather aloe. 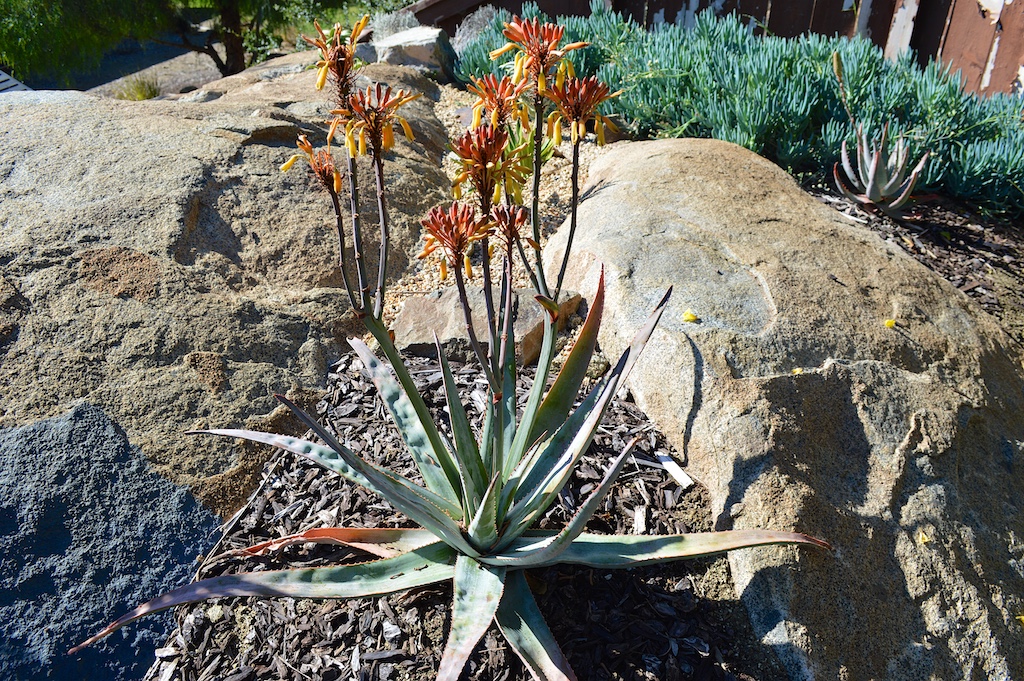 I have a few more larger aloes in the garden but they have either already bloomed or were just not ready at the time of this post. I am adding new stem-forming aloes to the garden at a rate of about 2-3 per year. So by this time next year I should have some new ones flowering.

Add a few to your garden. As you roll through winter, these aloes in bloom will warm the garden and suggest that spring is right around the corner.