Until recently, winter was breezing by with evenings staying above the 40-degree fahrenheit Mendoza Line. Unfortunately, the new year ended my unrealistic dream of going through an entire winter without seeing temperatures drop into the thirties. Just about two weeks ago an Arctic storm pushed right through California and brought with it either frost or freezing temperatures for three straight nights. Looking at my weather station’s lowest temperature recording, it showed I dipped one night to 36 degrees fahrenheit. A sensor in the most protected area of my garden (my courtyard) recorded 39 degrees. Of course, anytime we can avoid a winter where we experience 32 degrees or below is a huge win for me. So you will never see me complain about a low of 36 degrees. At that temperature 99% of what is in my garden will show no ill effects. Even my tropical hibiscus make it through unscathed—for the most part.

Once a cold front like we just experienced passes through and brings its low temperatures it is unavoidable that I will have some plants that show me they were not pleased. As a general rule of thumb, mild cold damage to a plant in my yard generally shows up a few days or even weeks later. One such development that shows itself a week or two later is massive leaf drop from a few tender tropicals. And like clockwork, it will play itself out only when the temperatures drop to 36 or below. Which in my case happens at least a few times each winter.

Plumeria is the most likely to be effected by our quick turnaround in winter temperatures. Some, like Plumeria obtusa “Dwarf Singapore Pink,” will hold their leaves year round unless we see 32-33 degrees. With the more commonly grown Plumeria rubra, we are not as lucky, as it isn’t so tolerant of our winter, both from a cool, moist soil standpoint as well as cold nights. Here you can see one of mine has already dropped most of its leaves. Noticing a cold snap coming on the long-range forecast I actually pruned up all my Plumerias and Hibiscus ahead of time. So the leaf drop isn’t as bad as some other plants shown later in this post. 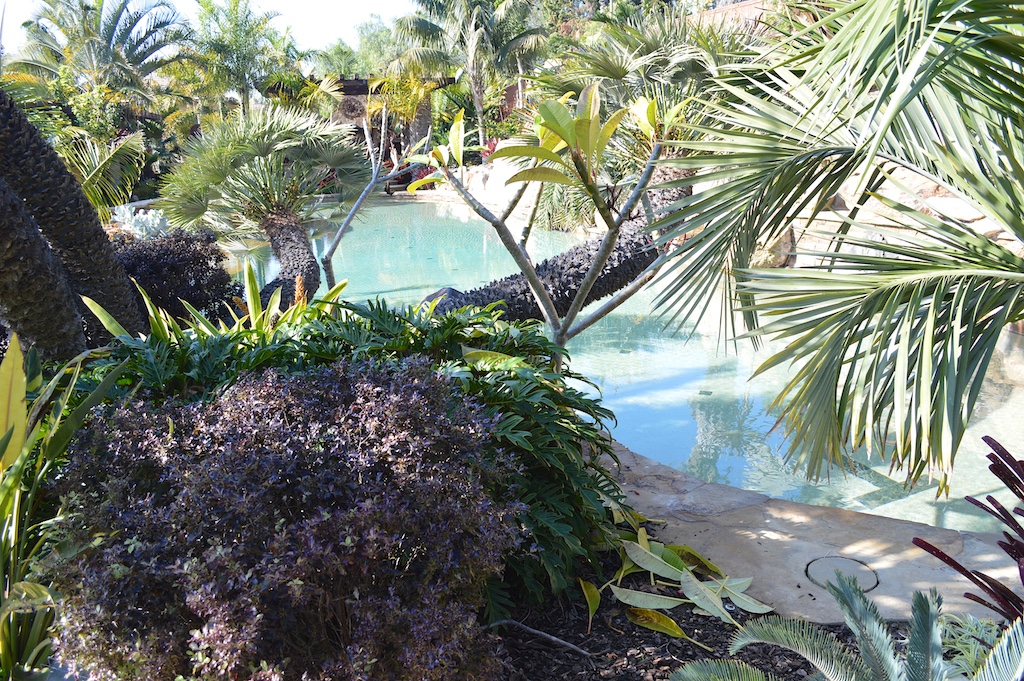 Probably the most cold-sensitive Plumeria I grow is Plumeria pudica. Native to Panama, Colombia and Venezuela, one would expect to have difficulty growing this Plumeria in the ground here in Southern Californi, which is most likely why it is seldom found in gardens here. I purchased mine in 2006 and even though the freeze of 2007 almost killed it, the plant proved resislant and came back strong and is now a beautiful plant nine months out of the year. In warmer climates Plumeria pudica is virtually an evergreen. Here in San Diego it will drop its leaves and stop flowering when the temps drop into the thirties. Plumeria pudica is a dense and bushy grower, so it produces a lot of leafy mass. You can see below what happens when it drops that mass.

Rauvolfia javanica is related to Plumeria. My tree below will actually be cut down this spring because I never knew that it would grow so fast. This tree is only three years old and will eventually block my solar panels if left alone. Also worth noting is that the fruit is a nuisance, in that it stains the sidewalk or anywhere else the kids or dogs step on the fruit and track it around. Rauvolfia javanica is a beautiful tree for the right yard and planted in the correct location. But like the Plumeria pudica above, it can hold a lot of leafy mass. 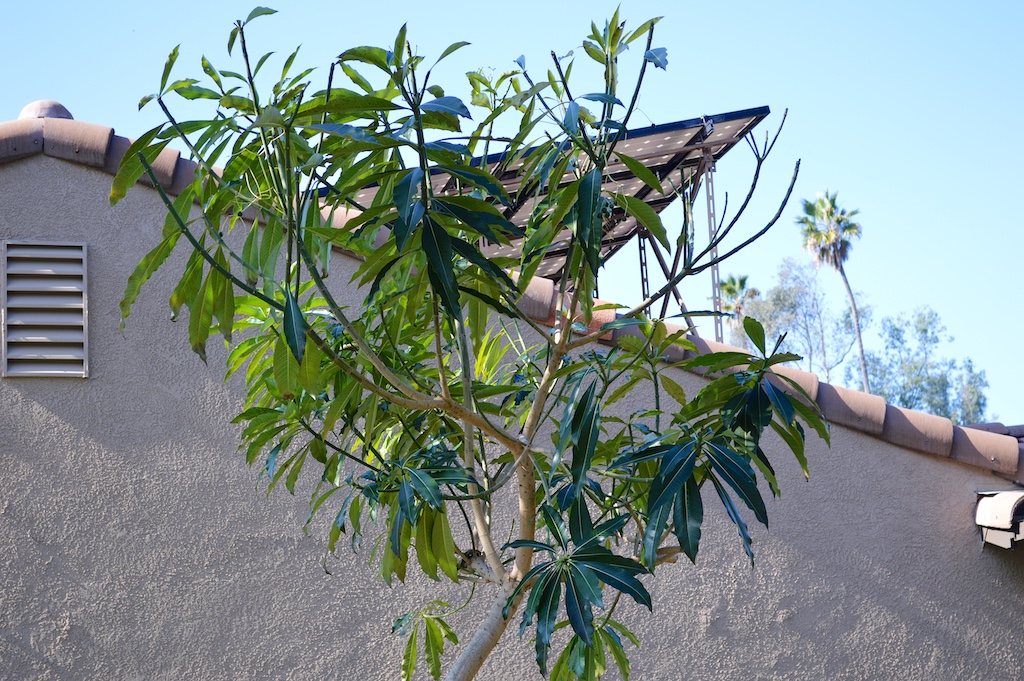 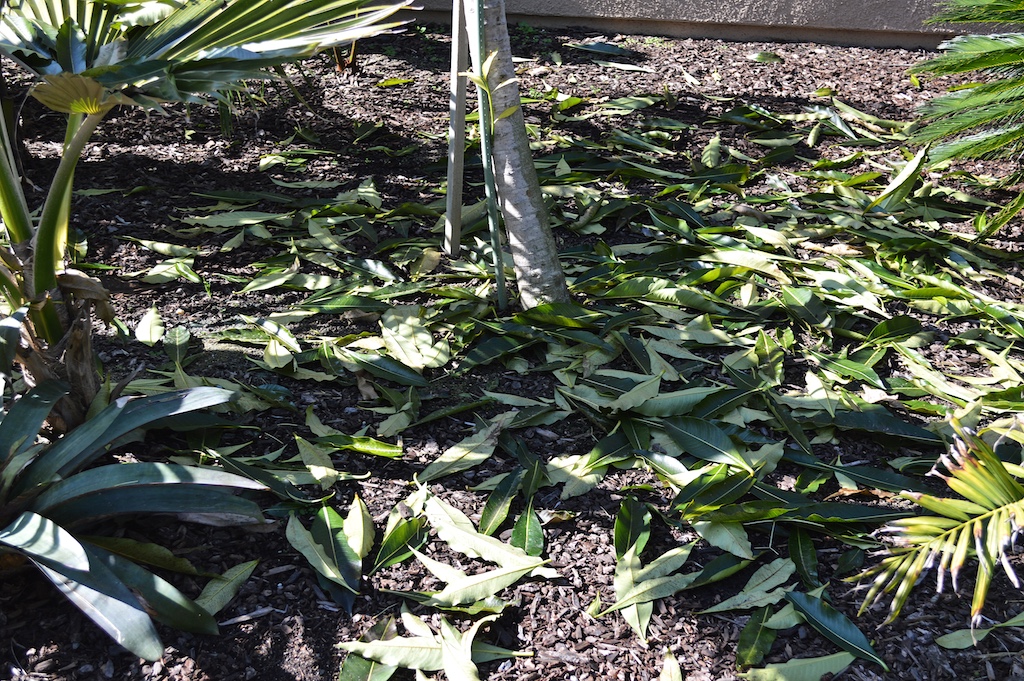 Another tender tropical that doesn’t care much for the cold is Stemmadenia littoralis. This tropical plant was mentioned under a post I did on fragrant plants a few months back. The leaves on Stemmadenia littoralis are usually a dark green, but through winter they begin to fade in color and eventually fall off once a cold snap hits. 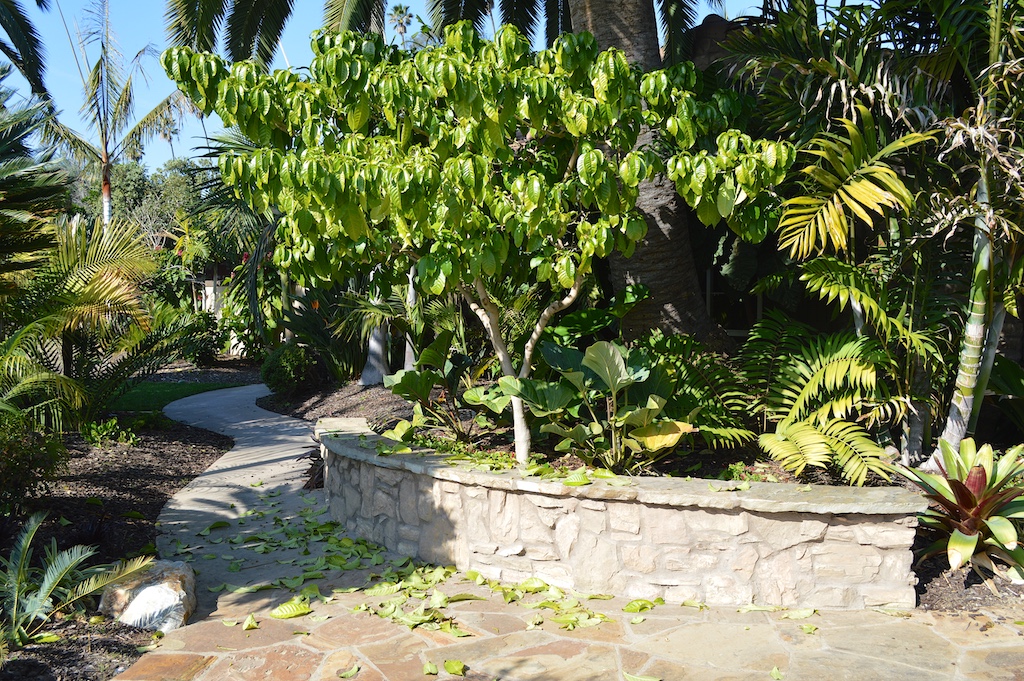 The final plant is a bit of a head scratcher for me. Eucalyptus deglupta normally wouldn’t be one to drop its leaves like the others above. For some reason this tree did. The other Eucalyptus deglupta in my yard still has its full summer compliment of leaves. My only guess is that it got a lot colder in this part of my yard than the temperature sensor on the other side of the garden was telling me. Eucalyptus deglupta is the only Eucalyptus found naturally in the Northern Hemisphere, making it one of the most cold-sensitive Eucalyptus that can be grown. With that being said, it can survive brief periods below freezing, as the winter of 2007 showed us in Southern California. 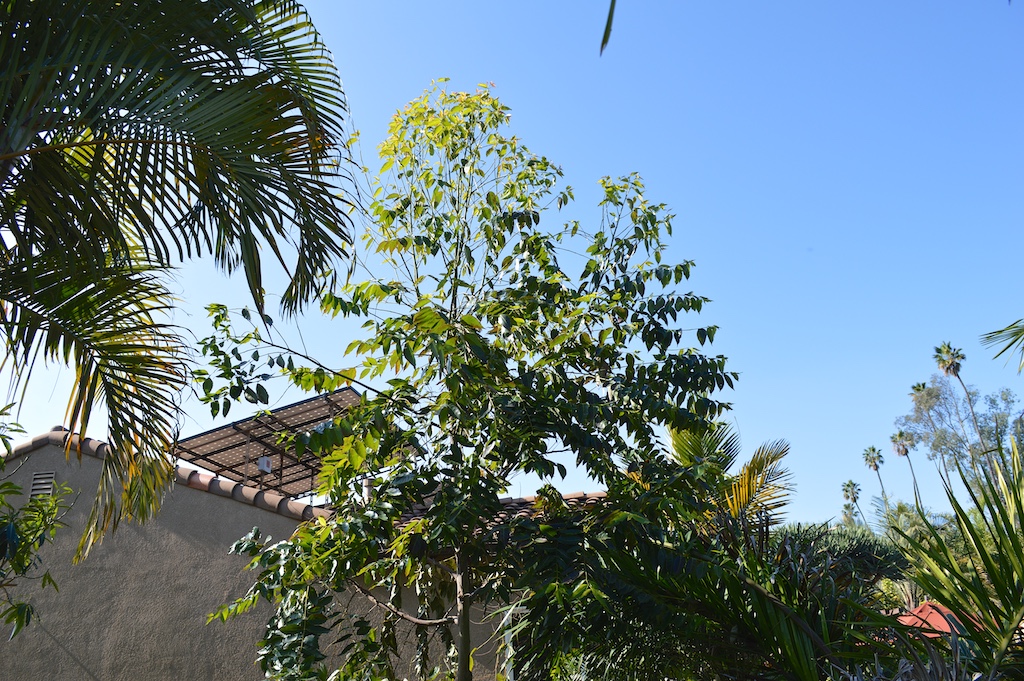 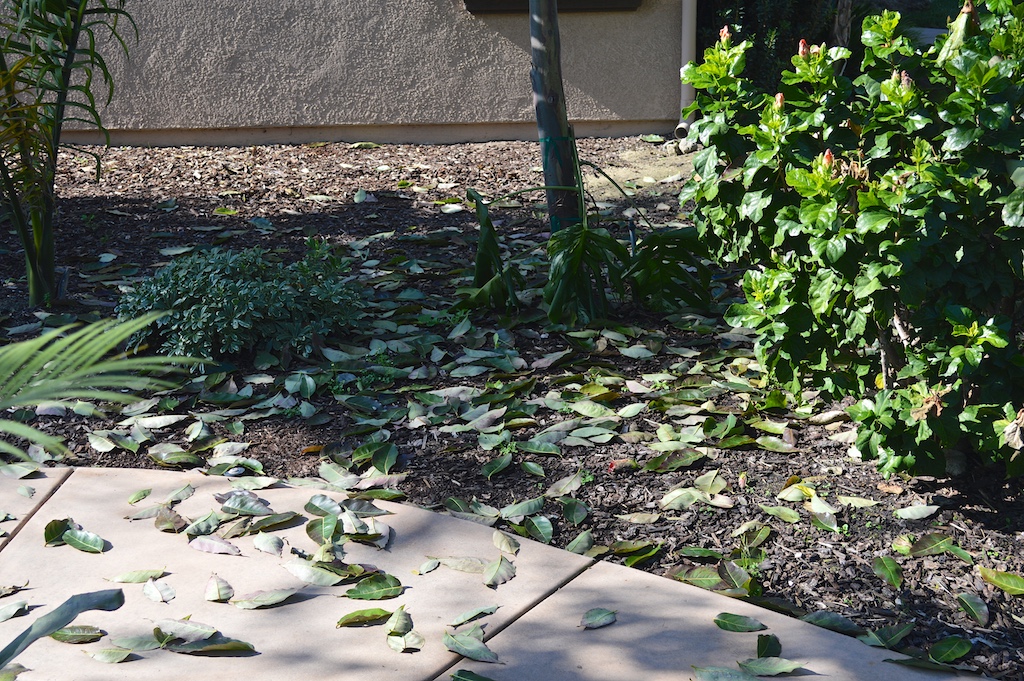 All the plants above, minus the Plumeria rubra, will begin to leaf out starting in March. Plumeria rubra will take its own sweet time. If I am lucky it should start to do something around May. If the flowers were not so fragrant and the colors so beautiful, I would never think about planting a tree that looks like a stick five months out of the year.