When it comes to lizards in your Southern California garden, chances are you know the Great Basin Fence Lizard (Sceloporus occidentals longipes). This species of lizard is the most commonly found, as it is quite abundant around populated areas. It is often seen basking in the sun on rocks, fences, and walls, and then scurrying away into the bushes when frightened, with the sound of a tiny stampede. Like most of you, this lizard has made a happy home in my garden. However, over the last few years I have noticed another lizard making its presence known in my yard. Finding one was a rare occurrence a few years back. It would simply be a brown flash out of the corner of my eye. I would only see one, on average, once every few weeks. In my garden today the brown flash has been replaced by an interesting new lizard, one that is now the most abundant lizard in the garden. It seems they have become emboldened in their numbers. 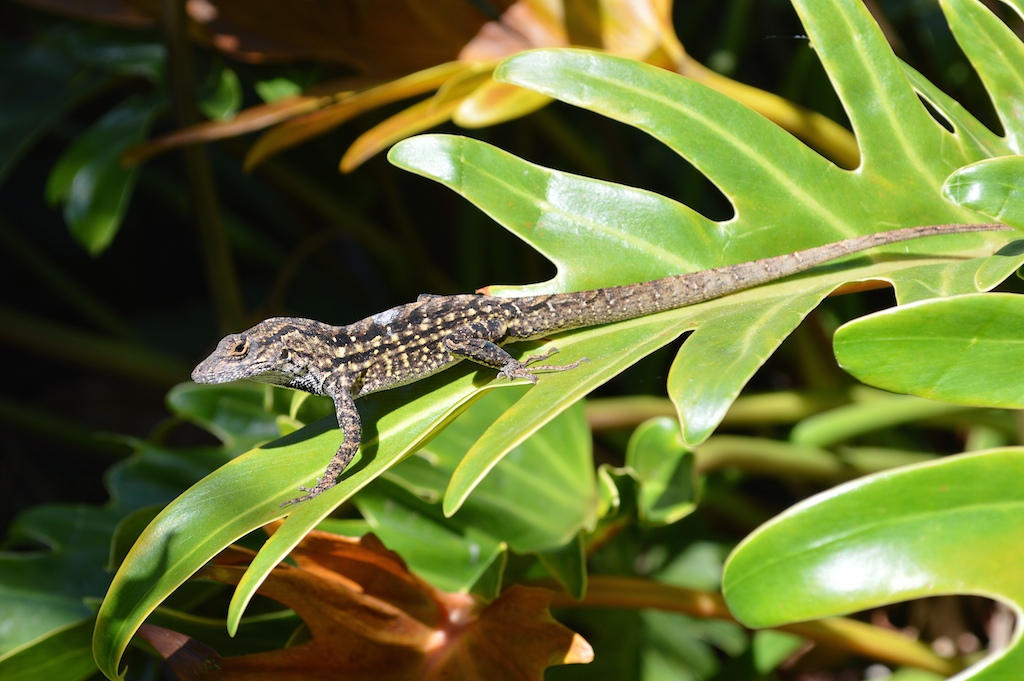 This little guy pictured above just didn’t seem to fit any lizard I have seen or read about in Southern California. I would ask people on garden visits what their guesses were. The usual reply was, “It looks like a Green Anole, but it is too brown for it to be one.” My curiosity finely got the best of me, so I decided to contact someone who might know. After some quick research, the name Gary Nafis kept coming up. His website www.CaliforniaHerps.com is the go-to online resource for anything to do with amphibians and reptiles found in the state of California. I sent Gary this photo, as it was the only one I had of the lizard at the time. 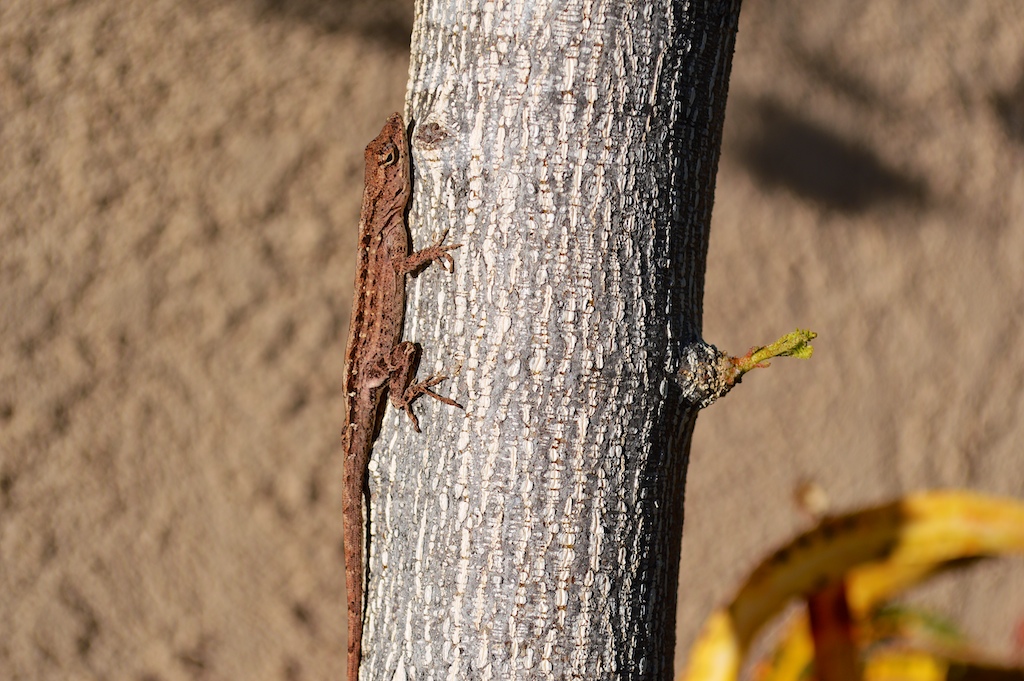 Gary got back to me quickly and was quite thrilled with what he saw. It was a female Brown Anole (Anolis sagrei sagrei). In fact, it was the first known documentation of this species in San Diego County. Basically, I somehow had a non-native lizard species that is commonly found throughout Florida and the Caribbean, now naturalizing in my yard. So how did this happen? The only plausible explanation was that some Brown Anole eggs were laid on a plant that was shipped in from Hawaii by Rancho Soledad Nursery. Every year I buy one or two palms from them fresh off the ocean container. I assume that I must have bought a plant with some hitchhikers. My garden is in a very mild 10a USDA Plant Hardiness Zone, it has a lot of canopy, and it has many water sources. The perfect oasis for a tropical illegal alien lizard to naturalize. 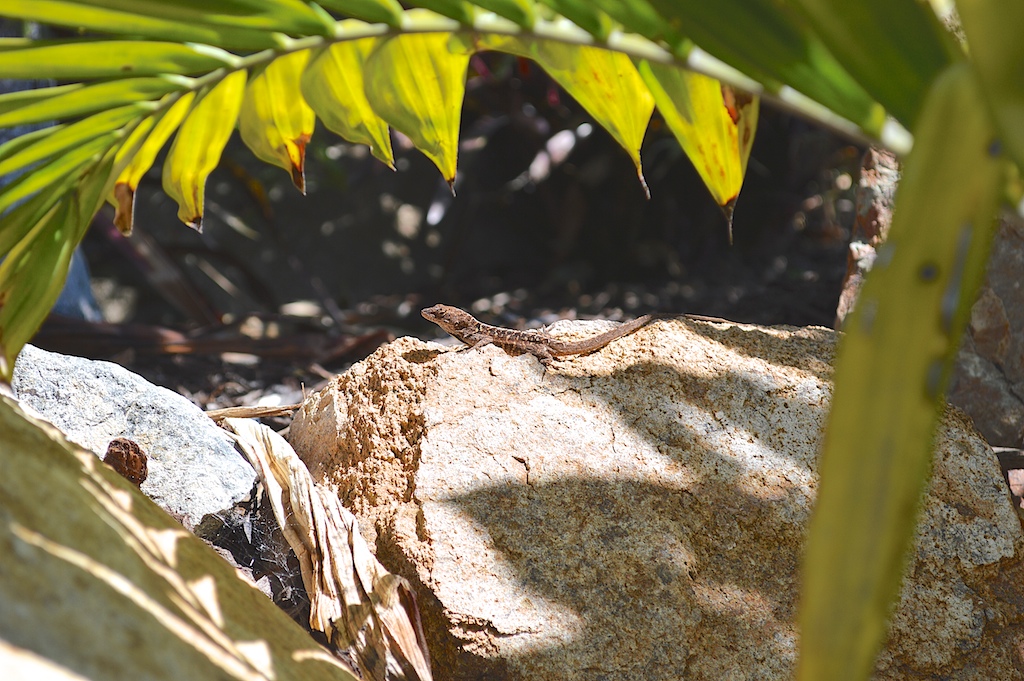 I know one of the first thoughts through your head while reading this was also one of mine when I was first told what I had in the garden. “Couldn’t this become an invasive species?” Gary didn’t seem concerned, and I have yet to be contacted by any herpetologist, like Gary said might happen. I would hazard a guess that there is not much concern here, as the Green Anoles have been found in many areas around San Diego for a while now and can’t seem to spread past only the best microclimates with the ideal landscape for them. The Brown Anole is even more tropical in nature than the Green Anole. Who knows what the future holds with them here in San Diego. Perhaps another freeze like I had in 2007 could wipe them out? Alien or not, the Brown Anole has added character to my garden. They can be found leaping from plant to plant, climbing trees, and darting out of nowhere to eat an insect. My best guess puts the total number of Brown Anoles in my yard at about 30–40. What a great natural insect and spider control! The coolest thing about having these lizards in my yard is watching how a male Brown Anole attracts a female or warns off other males. While the Great Basin Fence Lizard will do pushups, the Brown Anole shows off his beautiful red Dewlap. Here is one of my little garden buddies who likes to be photographed showing off. 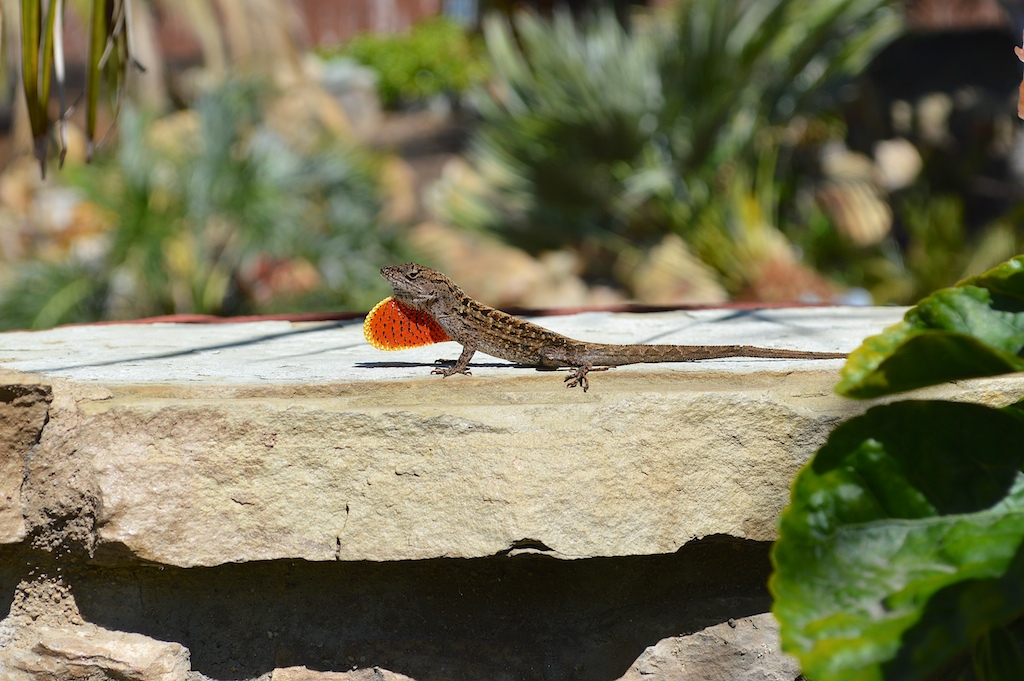 Much like in humans, it seems as though the female is the smarter of the sexes in Brown Anoles. Females are much more shy and a lot quicker to hide as you get close. Their greater survival instincts make them much harder to photograph as well. The female can be identified by the narrow light brownish stripe on the center of the back, as seen in the picture below. 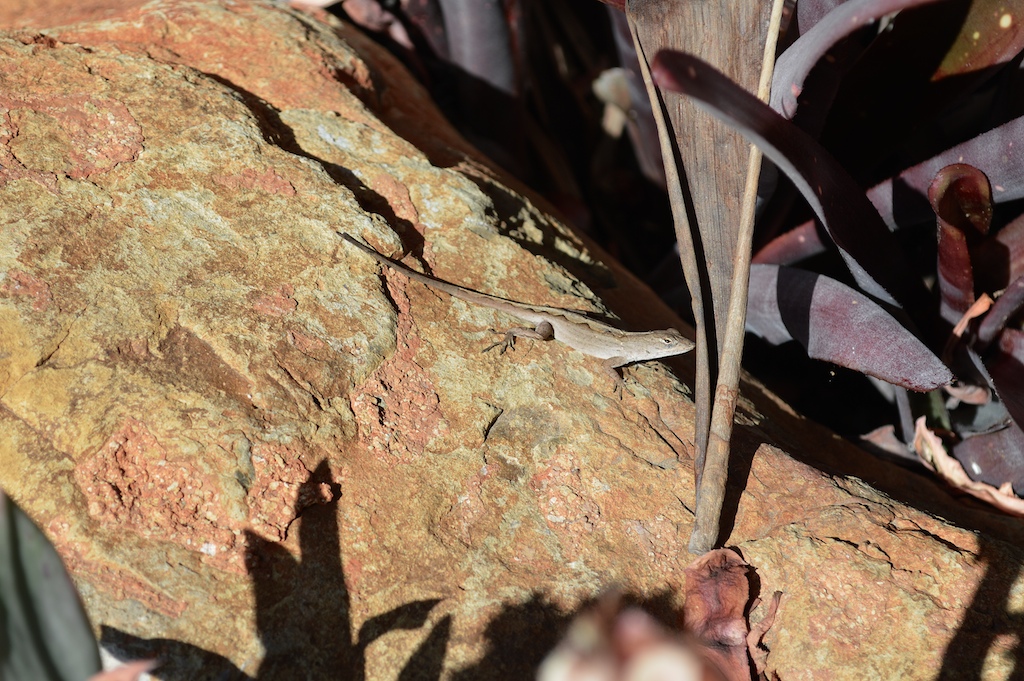 Brown Anole Lizards are certainly entertaining to watch and photograph. They are a welcome addition to my garden even though they were most likely a stowaway. I enjoy them so much that I am now actively trying to trade some of my Brown Anoles for some Green Anoles a friend has in his garden in San Diego. I’ll keep you posted…