Back in April I wrote about the Brown Anoles (Anolis sagrei sagrei) that had naturalized in my garden. In that post I mentioned that some herpetologist might be contacting me to come out and collect some specimens and gather some more information. Last weekend I had the pleasure of showing off my new lizard friends to a couple of people who would appreciate them even more than I. Here are Clark (on left) and Ed working as a team to round up their first specimen (which got away). 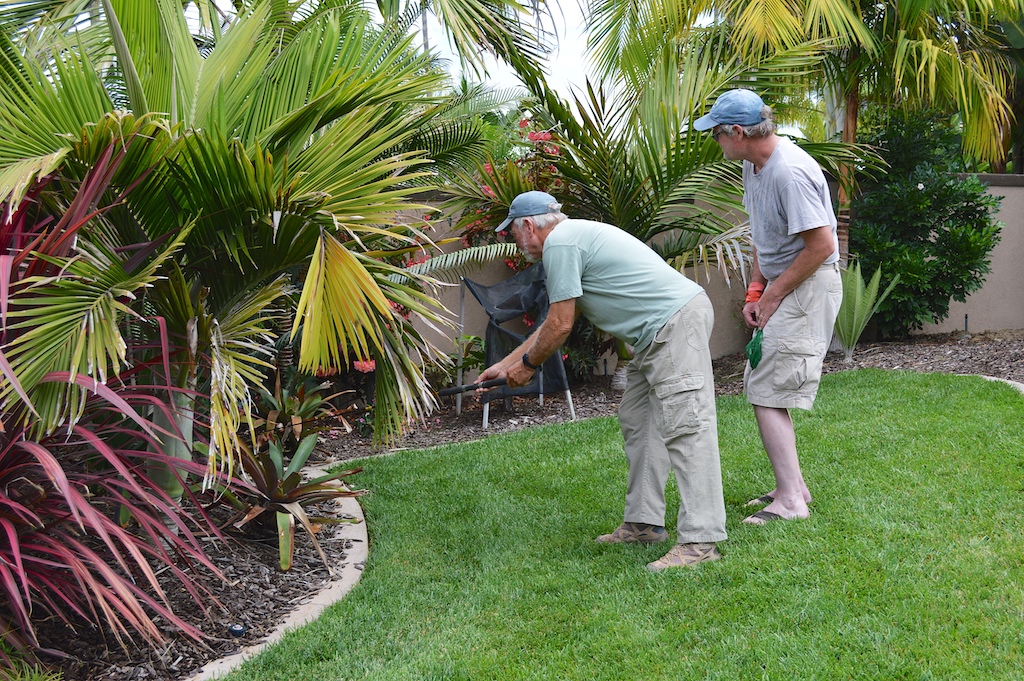 Edward Ervin is biologist at Merkel and Associates, Inc. here in San Diego. His main focus is freshwater ecology with a special interest in native and introduced mollusks, fish, amphibians, and reptiles. Ed brought along his sharpshooting buddy Clark (more on that later). Clark Mahrdt is an associate in herpetology at the San Diego Natural History Museum and works part-time as a vertebrate biologist. So I was a little out-classed on the education front.

The day started off cloudy, so most of the Brown Anoles were still in hiding. As such, I spent the first 30 minutes promising the guys that there really were Brown Anole lizards in my garden. As the sun came out, however, so did the lizards. The first victim—ahhh specimen—was this Brown Anole hatchling. 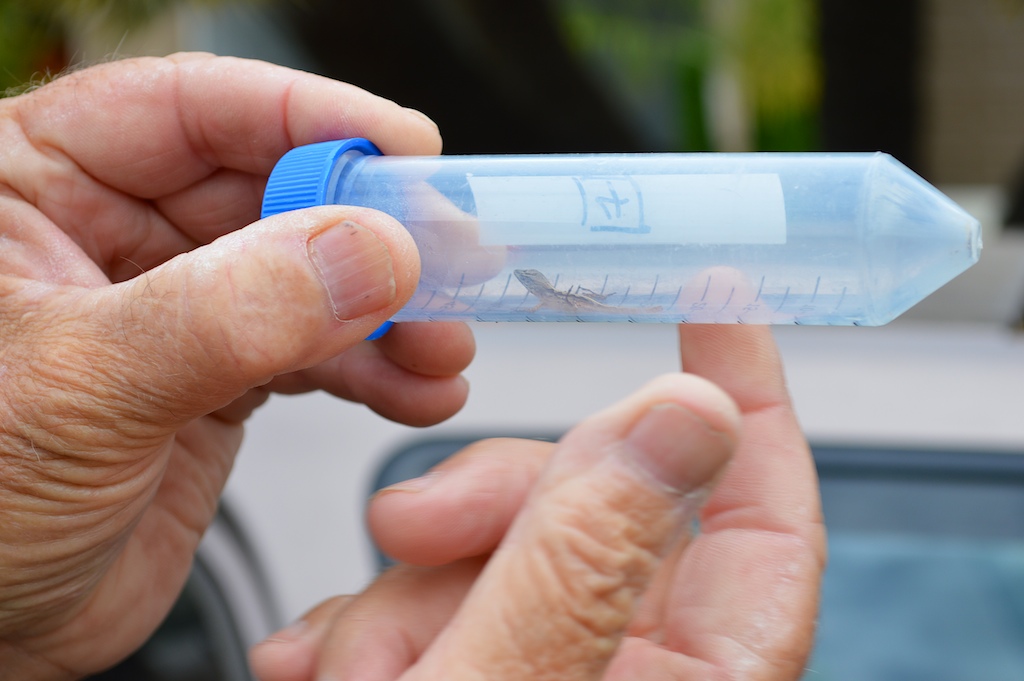 Clark had two methods for catching lizards—methods he has perfected over his long career. The first was to use an old fishing pole and run line through it ending in a loop. This loop would then go over the lizard’s head and when pulled it would snare the unsuspecting lizard. Here is Clark moving in for the capture. See the Brown Anole? 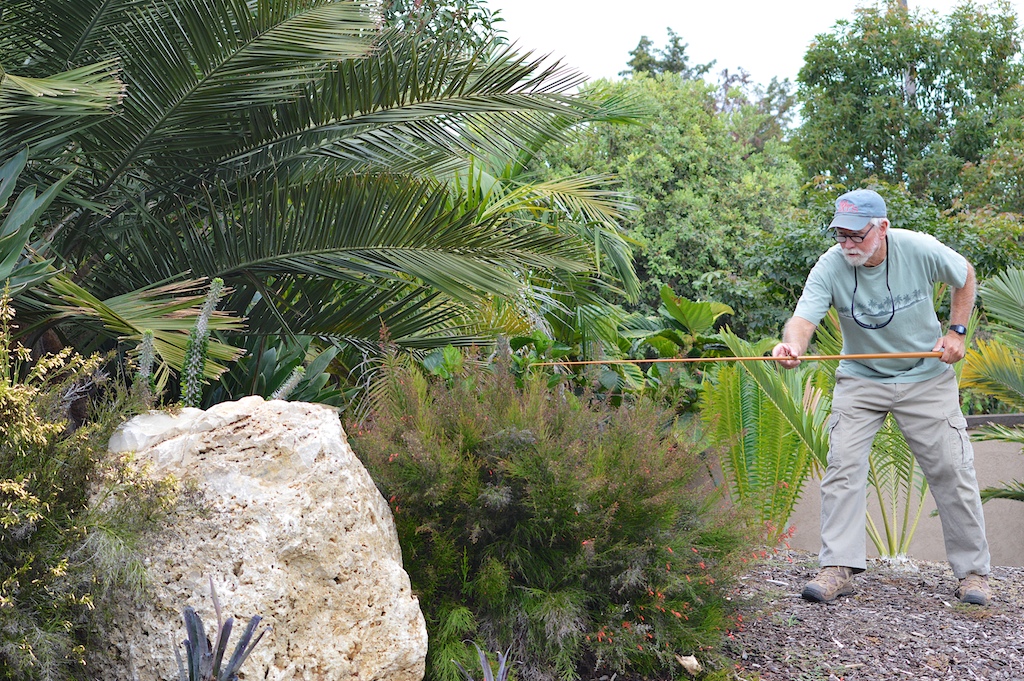 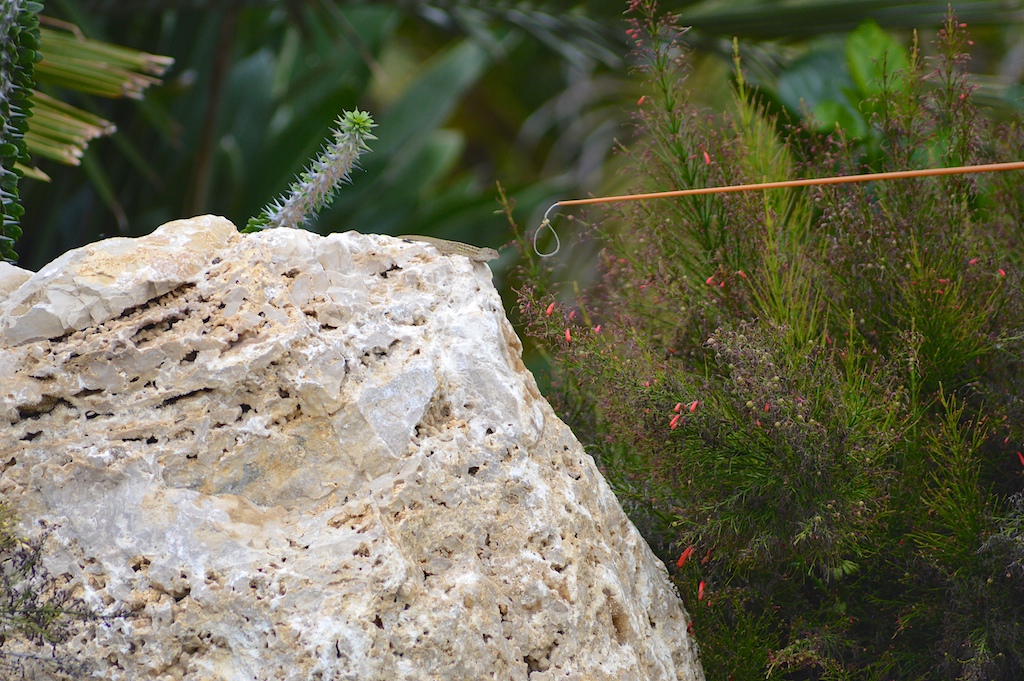 You can see the approaching ring doesn’t frighten off these elusive lizards for some reason. This Brown Anole did mange to wiggle out of the snare once pulled tight. With this escape, Clark started the day off 0-2. 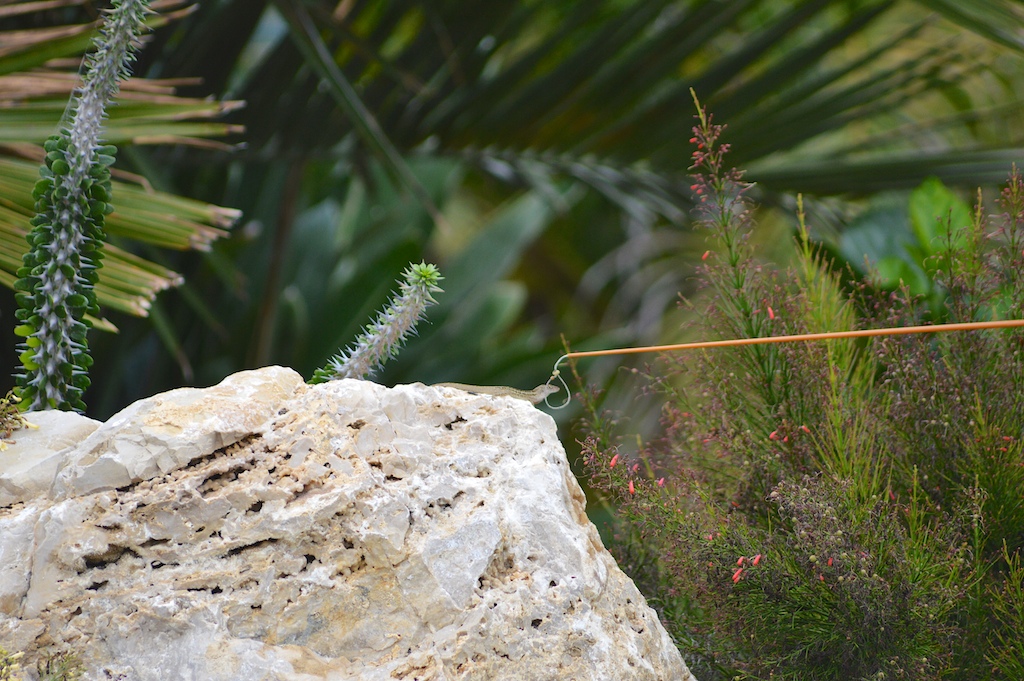 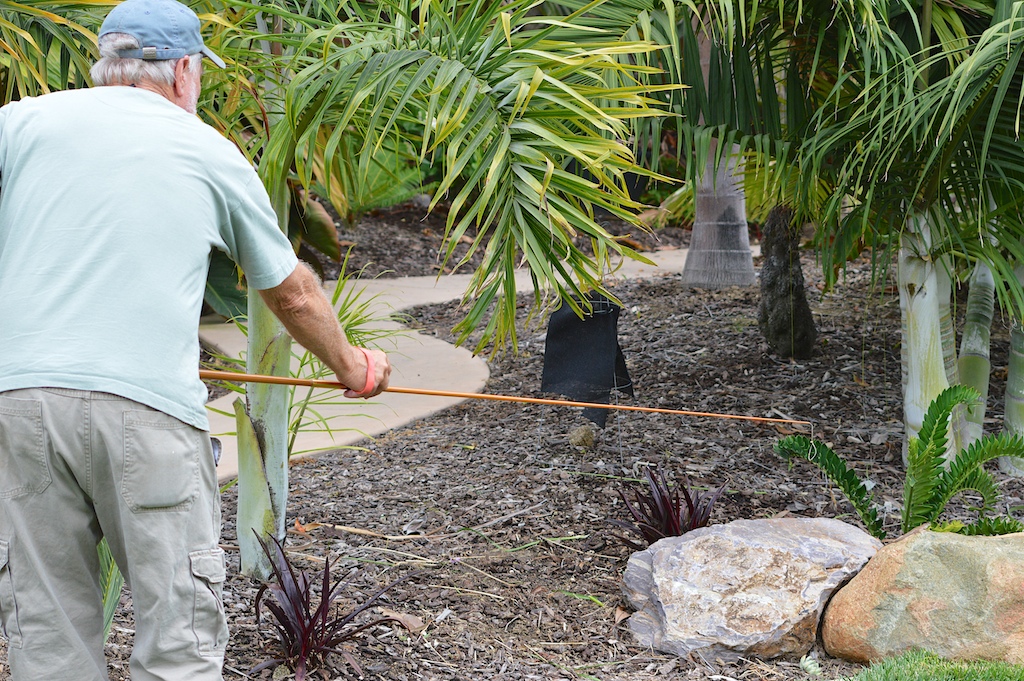 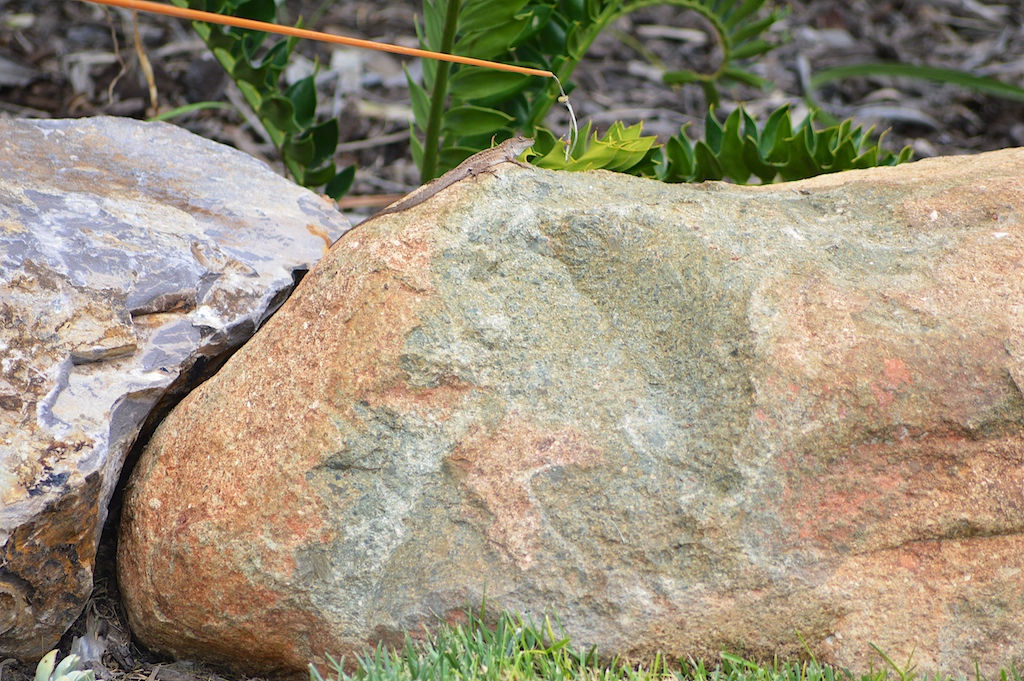 This time Clark was successful and the first male specimen was captured and would soon be heading to the San Diego Natural History Museum. 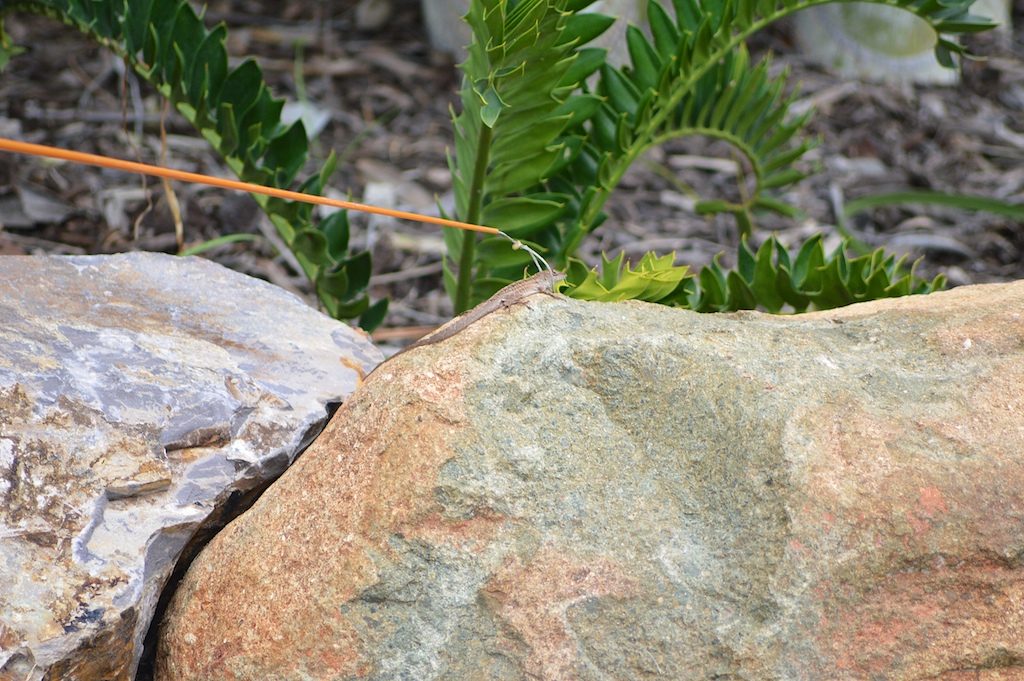 This Brown Anole shows just how well they are able to change their appearance and blend into their environment. Almost a perfect match to the Hibiscus branches he is hiding in. 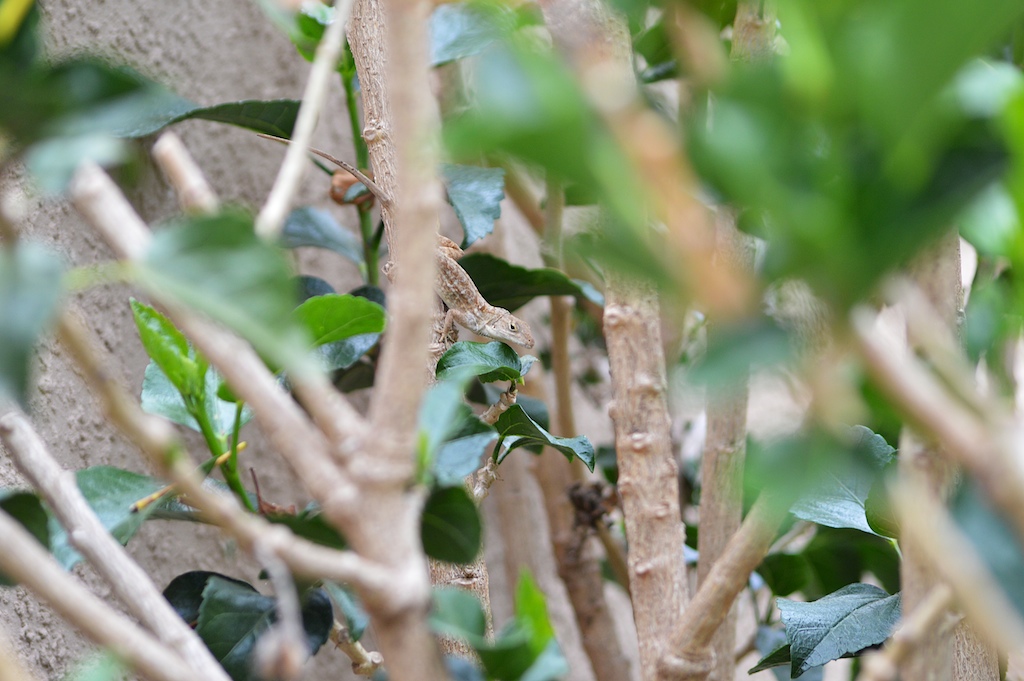 Unfortunately for him, Ed’s eye was too good. After a few minutes of searching, Ed spotted him and the loop made its way in for another successful capture. 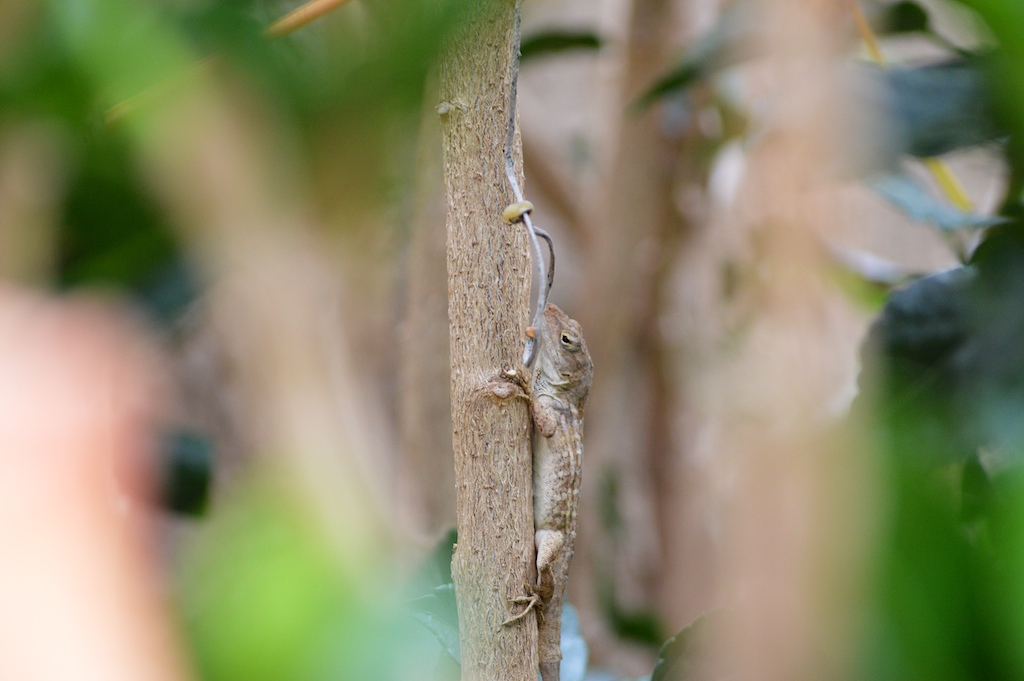 This guy was not happy after his capture, however, and let Ed know about it the only way he knew how. 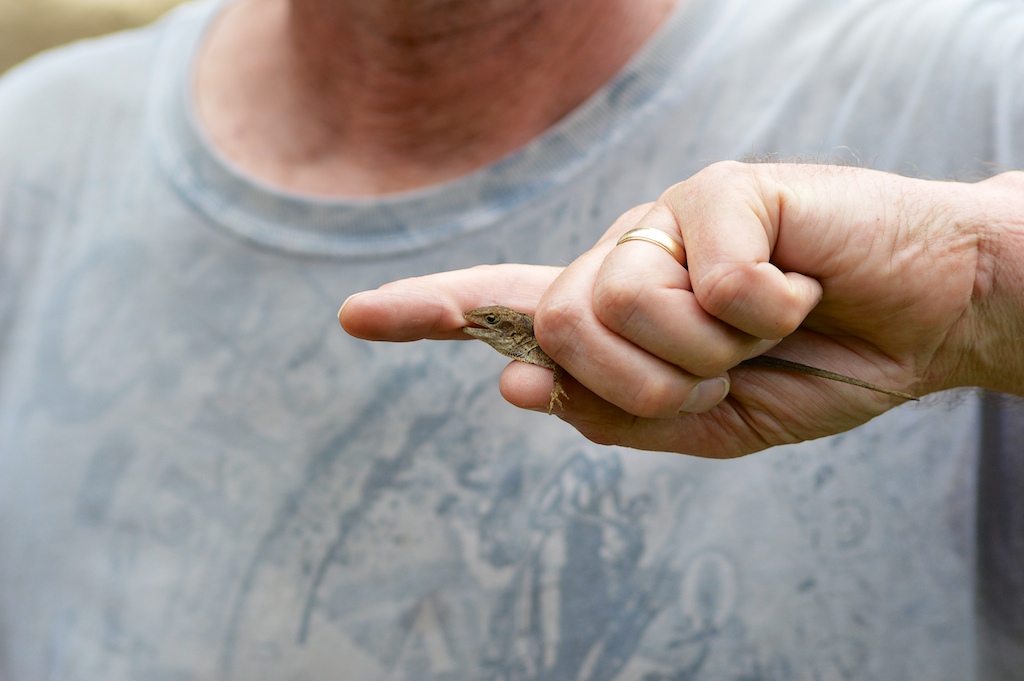 After warming up with the fishing pole and feeling more comfortable around me, Clark decided to show off a little. He broke out some large rubber bands, and with the accuracy of any shooter I had in my sniper platoon in the Marine Corps, he could hit a Brown Anole. This method really works great when the lizards are out in the open. Once hit with the rubber band it would stun the Anole and make it easy to capture. Here is Clark sighting in his first target. 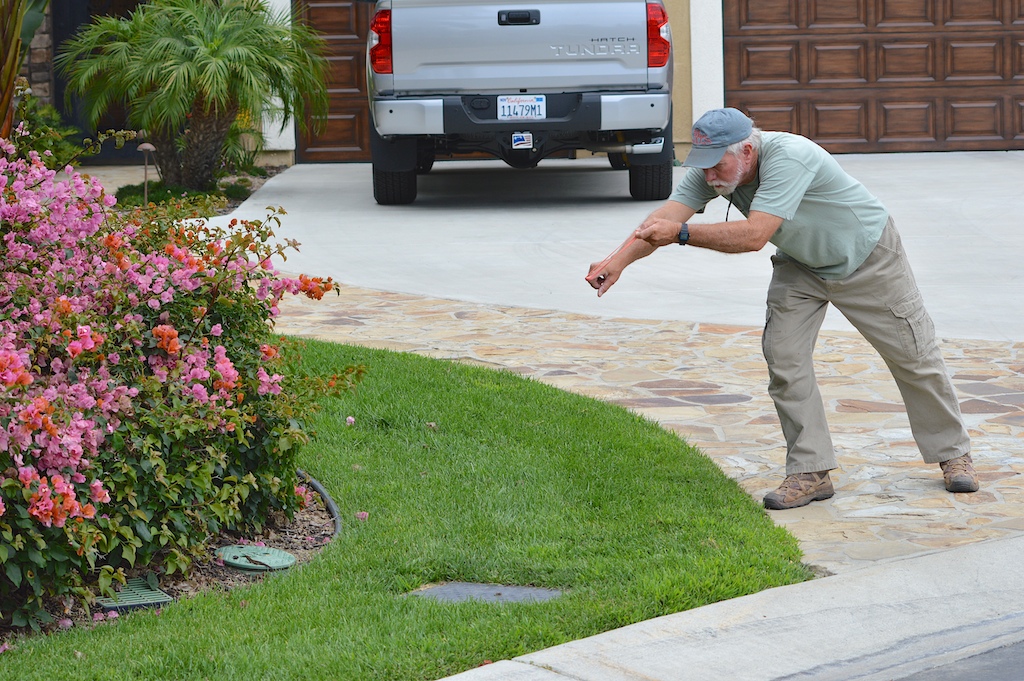 I certainly wouldn’t want to play darts against Clark, as he is most likely a ringer. Can you see the lizard Clark is aiming at in the following picture? He hit it. Pretty impressive shot, right? 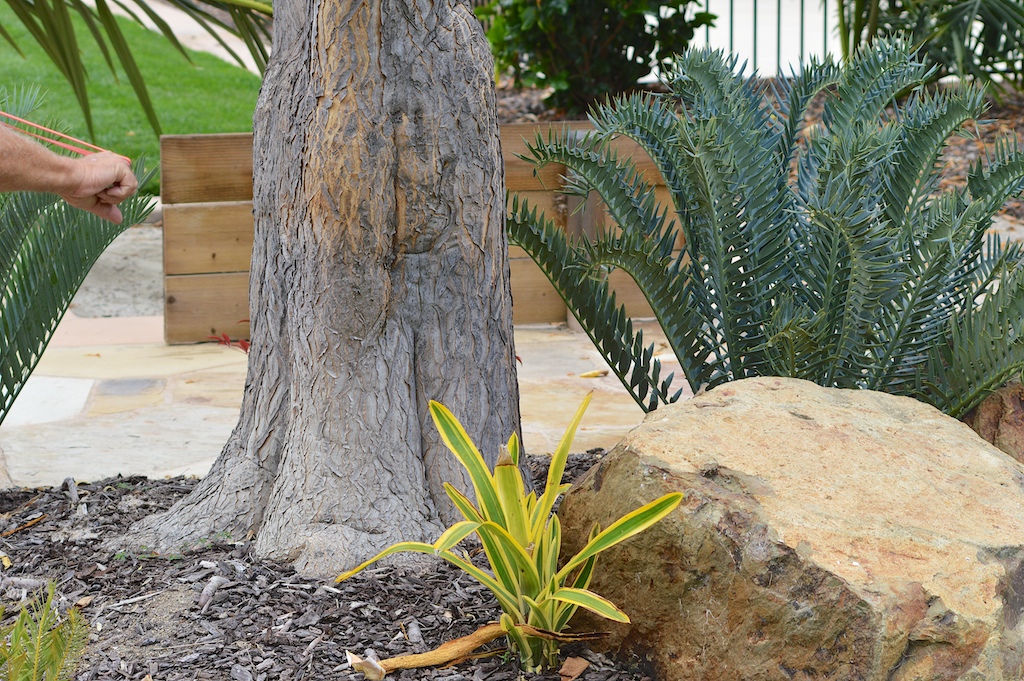 Brown Anoles are not the only lizards found in my garden. I have a few native species as well. Here is a Side-blotched Lizard hatchling Ed was able to capture. You can also see from the picture that Ed was the rubber band holder for Clark. 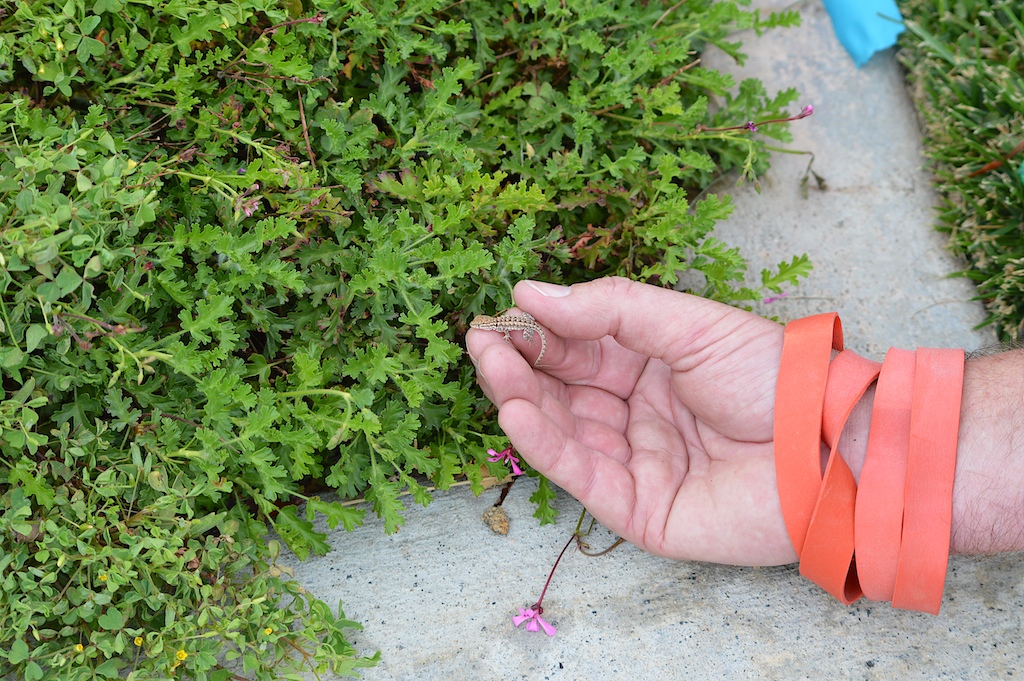 As I stated above, all the specimens captured ended up at the San Diego Natural History Museum. A geographic distribution note was submitted to Herpetological Review as well. I was pleased for another reason that Ed and Clark made it out to my garden in that it actually makes me feel better knowing experts in the field have been to my garden and have documented these non-native lizards. I would hate to be “that” guy who was responsible for some new invasive species introduction to California. At least now I know the right people are aware and that they didn’t seem alarmed. After doing some further research about how fast this lizard has spread around the South, maybe it was just a matter of time they ended up in San Diego County anyway.

It was a pleasure to spend part of my Saturday morning with Ed and Clark and I thank them for coming over. I hope to see them again some time.