How can we top a record-breaking winter here in Southern California? How about a second week in less then a month of high heat and brutal Santa Ana winds in spring? It is happening and I can not recall another time since I have lived here when we have had two separate weeks of high 90-degree temperatures to go along with the Santa Ana’s – and all before the end of May. Crazy indeed.

Today my temperature gauge said my garden hit 97 degrees with a relative humidity of only 7%. This forecast from AccuWeather gives you an idea of what we still have ahead of us. You can see we are about 30 degrees above our historical average high for this time of year.

Not only did we have unseasonable heat and low humidity, but the winds were pretty strong at times too. Most of my plants are well rooted and I make sure to maintain any trees that I have so they are not top heavy and breeze (no pun intended) through the high wind gust. But stuff does get blown around. Look at the Norfolk Pine in the background. 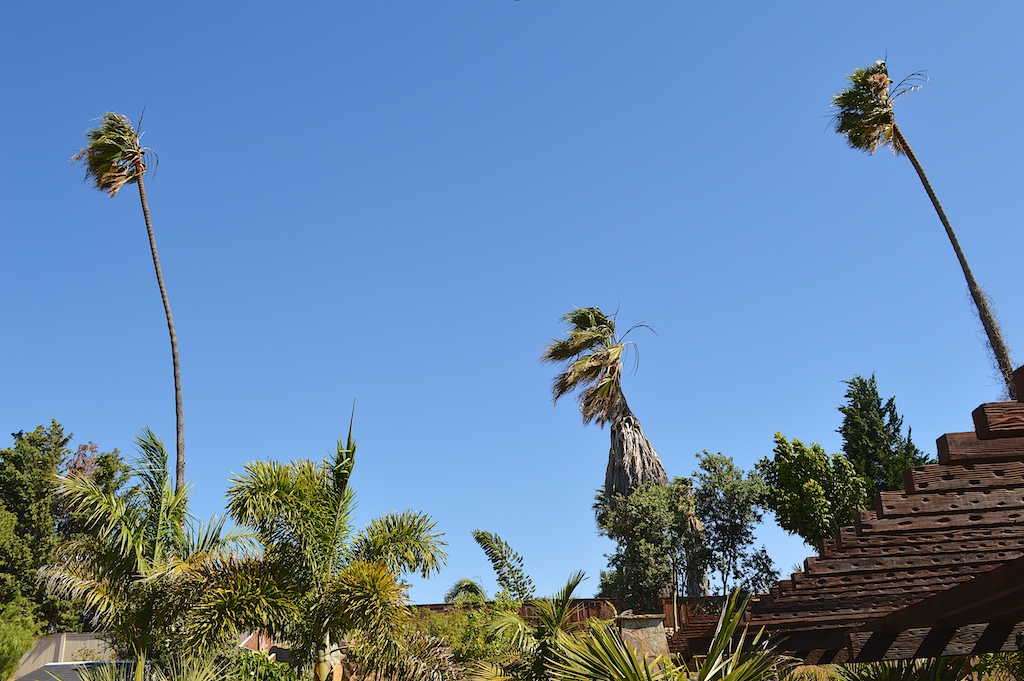 When you take all this and combine it with the fact it happened in May, when many tropical plants are just starting to recover from the stress of winter, you do end up with some uncharacteristic damage. Damage that you would not see when these Santa Ana winds happen in the more typical October. 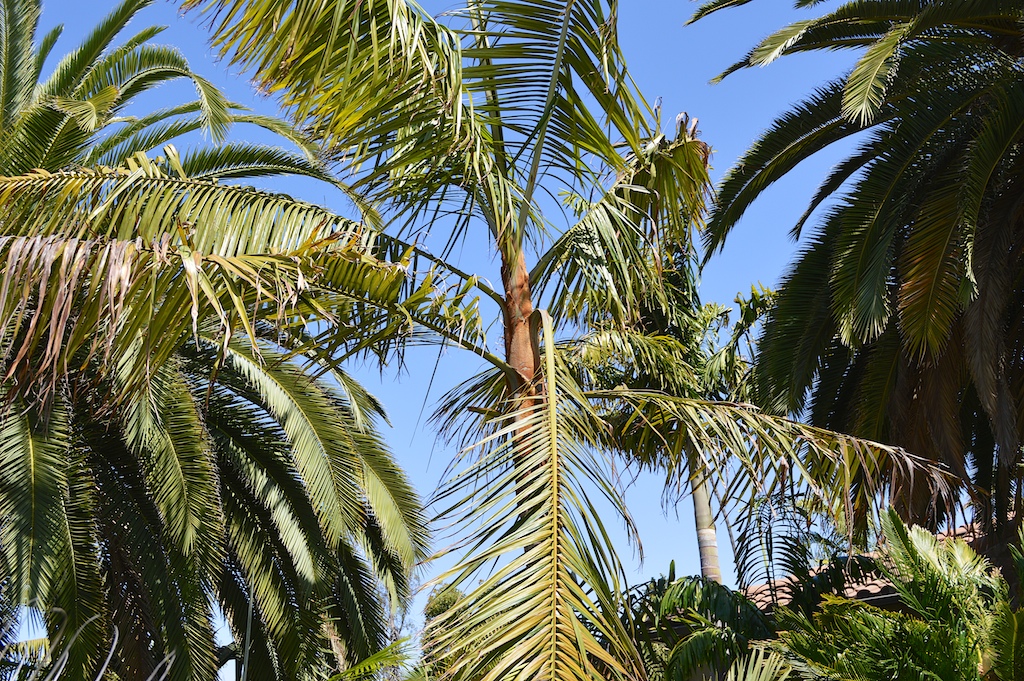 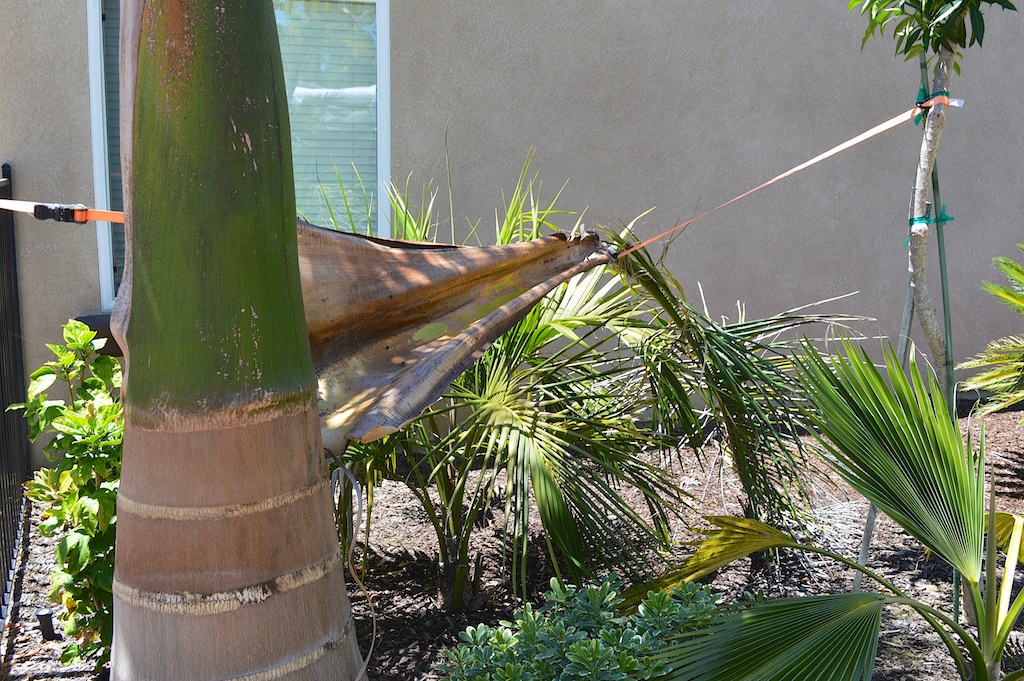 Yeah, I know my friends from hurricane central Florida are laughing at this “damage.” But what my friends from Florida forget is that it takes us much longer to heal from damage thanks to the much slower growth rates we get out of our plants here. As an example, my Licuala pelota var. sumawongii—shown below—only puts out one new leaf a year. The winds shredded the leaves that were hanging out unprotected, and you can see the new spear that was opening is already burning. It will take a few years for this plant to recover and look like the super model it once did. 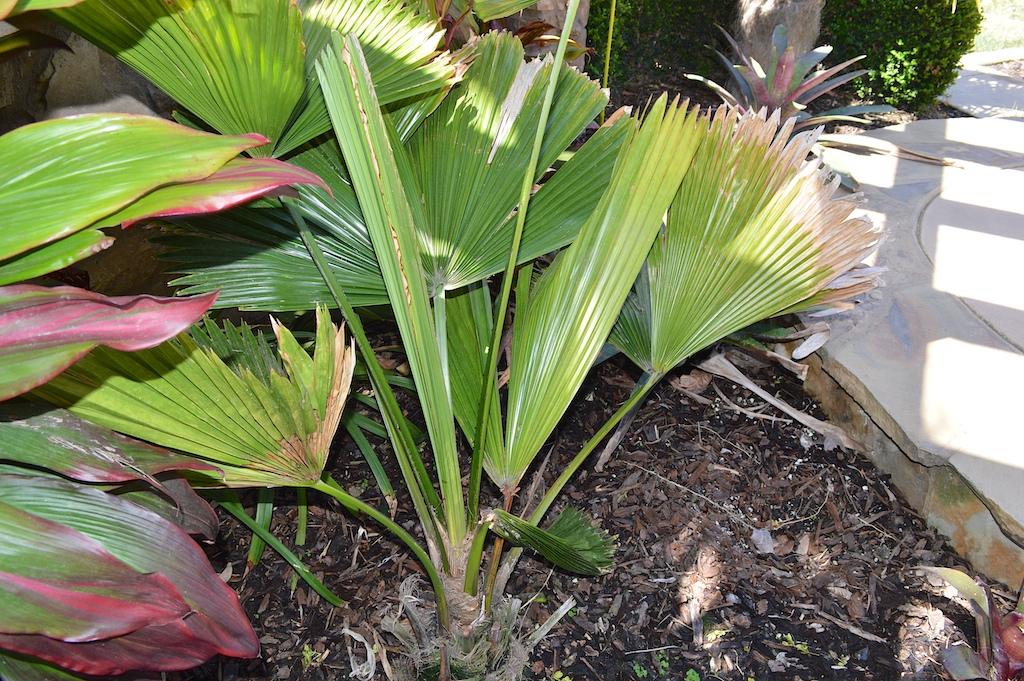 The second part of the equation that leads to damage of plants during a Santa Ana wind event is the really low humidity and the high heat. These two palms were suffering from the first weaker Santa Ana we had a few weeks earlier and are now getting beat up even further. My Licuala ramsayi’s new spear just completely wilted in the dry, hot air and my Burretiokentia koghiensis is really frying now that it is exposed to the elements a little more since I pruned up a large canopy tree that was once protecting it. 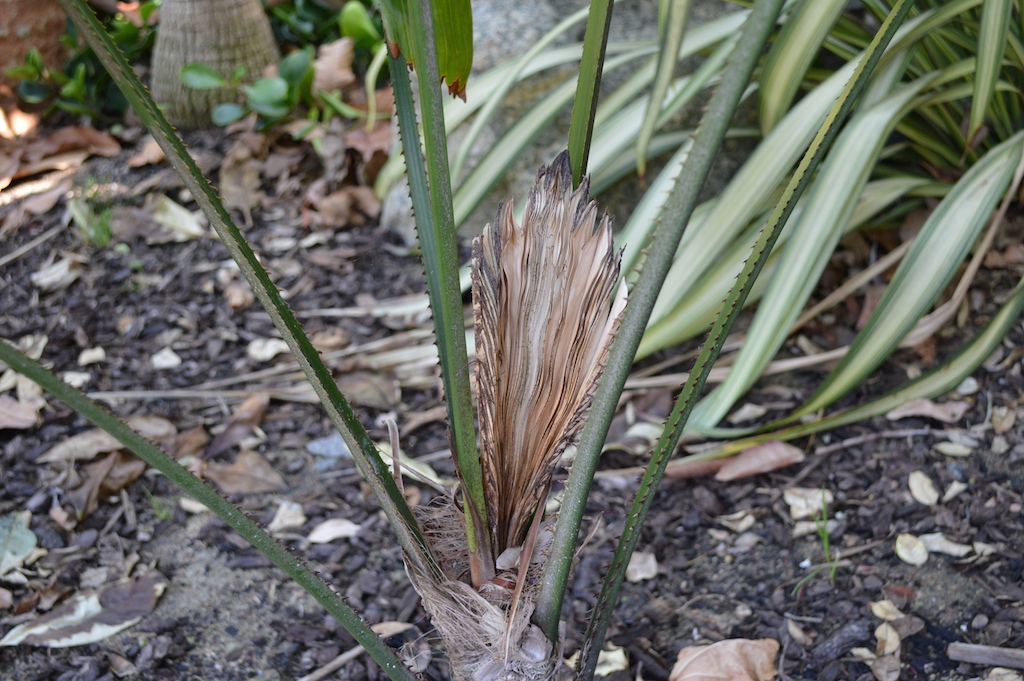 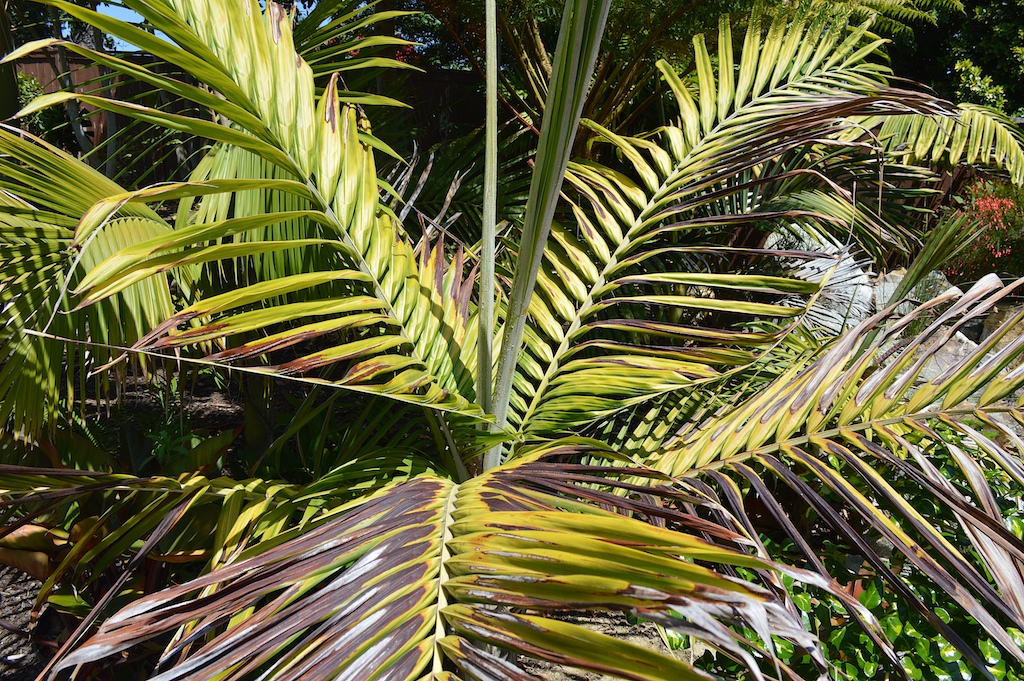 The only way you can protect your plants while the Santa Ana’s are blowing is to water, water , water. You need to make sure that your plants are replacing all the H2O they are losing through transpiration thanks to the high heat and low humidity. I choose to run my water once a day on all zones until the winds and temperatures drop. There is no sense in trying to save a few bucks when I already have so much time and money into my garden as it is. 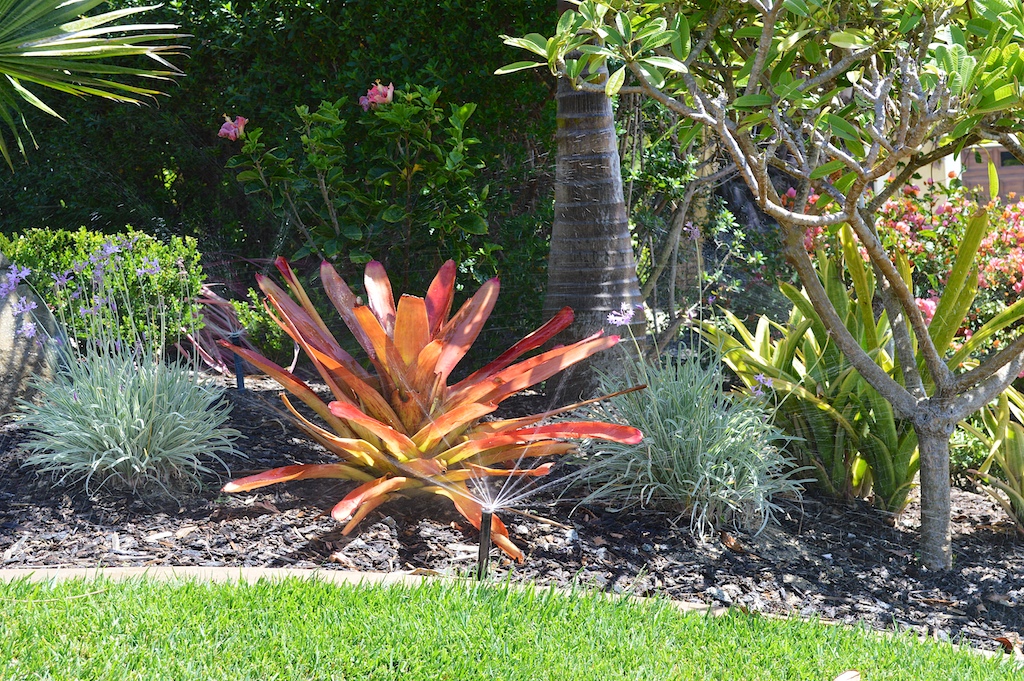 The real dangers that come from the Santa Ana winds are the fires they can bring. Particularly now that we are suffering from a state-wide drought. I believe at last check before loading this post tonight, we had 9 different fires burning at some point in the San Diego County area. Here are two that are burning close to my house in Vista. The first is the Carlsbad Poinsettia Fire. The second is the San Marcos Coco Fire. 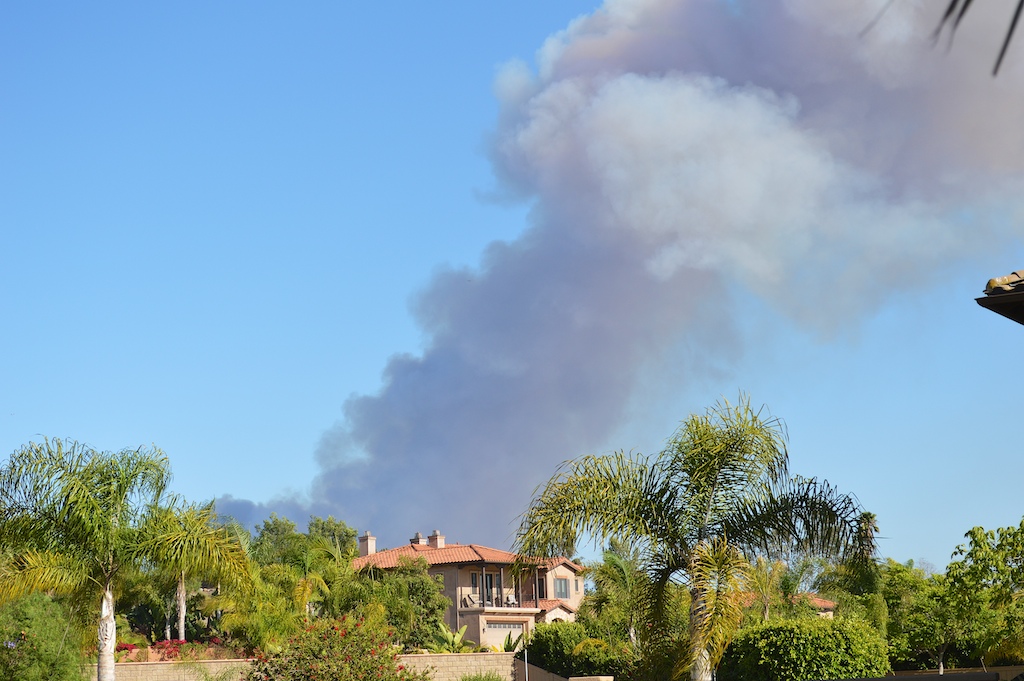 As of tonight, we have had no need to evacuate. But many of my friends and family have not been so lucky. For us, only school and soccer have been canceled, so we have gotten off easy. This certainly puts things into perspective that this minor, irrelevant cosmetic plant damage I have is such a trivial thing when you think about the poor people that lost their homes already in the fires.

I stated back in January that Mother Nature does not offer freebies. This is certainly proving my point.