Water-soluble fertilizer is not cheap. I currently pay anywhere from $40 to $50 per 25-pound bag. So when my fertigation system malfunctions and wastes an entire 25-pound bag (and who knows how much water), I tend to get pissed. For the third time in two years I have woken up to a surprise the following morning after filling my system with fertilizer. The latest episode was caught while heading out for the day. I noticed water coming out of one of the drains onto the street. With no sprinklers set to run, there had to be an issue somewhere. So I reversed my truck back into the driveway and walked out back to investigate.

Did the kids or myself not leave the water on when one of us added water to the koi pond? Nope. Is my RO unit running and throwing out waste water? Nope. Was a sprinkler valve not closed all the way? Nope. OK, that leaves only one more thing to check. My EZ-FLOs.

Everything looked good from the bird’s eye view. A nicely hidden EZ-FLO in a large valve box that the landscape guys called a “baby coffin” due to its size.

Sadly, upon moving closer to the valve box I noticed water overflowing from the left-hand side. I knew where that was going to lead. I lifted the lid and there it was. The source of the water running out on the street—a malfunctioning EZ-FLO main line unit. 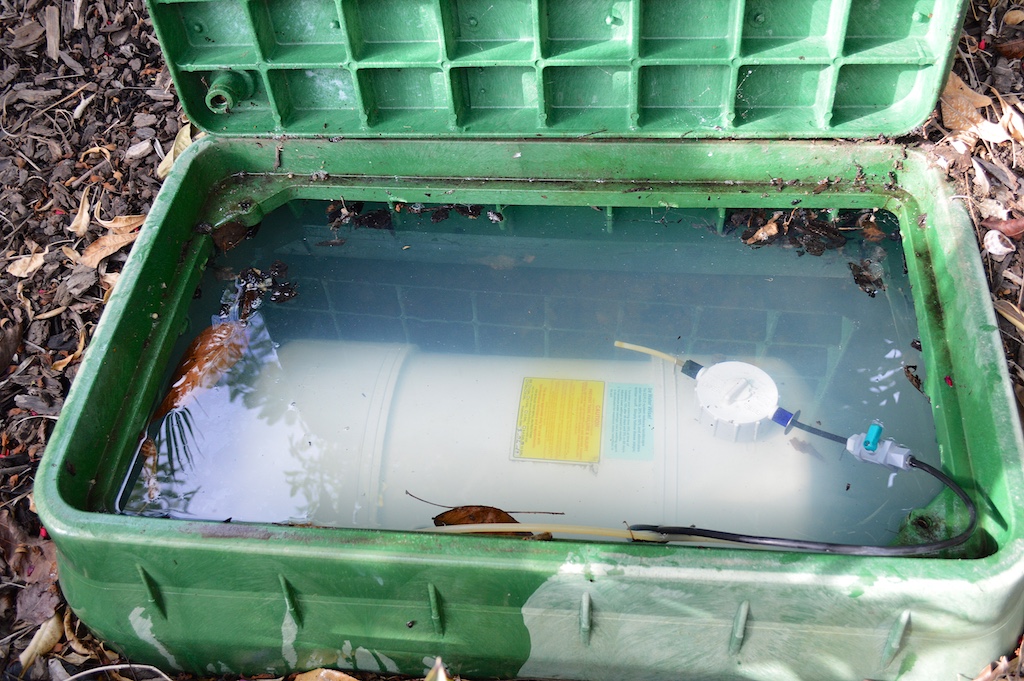 I quickly closed one of the shutoff valves going to the system. The other was not visible so I had to put my hand in the water to fish for it and shut it off. It didn’t take a rocket scientist to know right away that the quick disconnect on one of the shutoff valves didn’t hold.  You can see above where the shutoff valve is no longer connected to the poly tubing. When this happens water will continue to run until someone shuts it off. At the same time the water is being pushed through, the system is also draining the tank of all its fertilizer content.

The first time this happened I just chalked it up to experience. I figured I should always double check that the quick disconnect is locked into place and the first time this happened I did not. My mistake was that I trusted the shut-off valve. From that point on I have always put the poly tubing into the quick disconnect and pulled back with a little force to ensure it was locked. It is now a routine and I certainly checked this time as well. It might have had a little wiggle but it was connected and locked.

Once the water drained out of the sprinkler box I filled up my 10-gallon EZ-FLO with another 25-pound bag of fertilizer and screwed the cap on. I already knew I was tossing out the old shutoff valve but I wanted to test how weak the quick disconnect really was. Once the poly tubing was pushed into the quick disconnect and I pulled back on it, it tested positive to being locked into place. However, slightly pulling back with constant pressure proved to be its downfall over time. It slowly slipped off, as seen below. Had the other shutoff valve been opened the water would be shooting out that clear poly tubing you see.

Here is the culprit—a shutoff valve with broken quick disconnect. 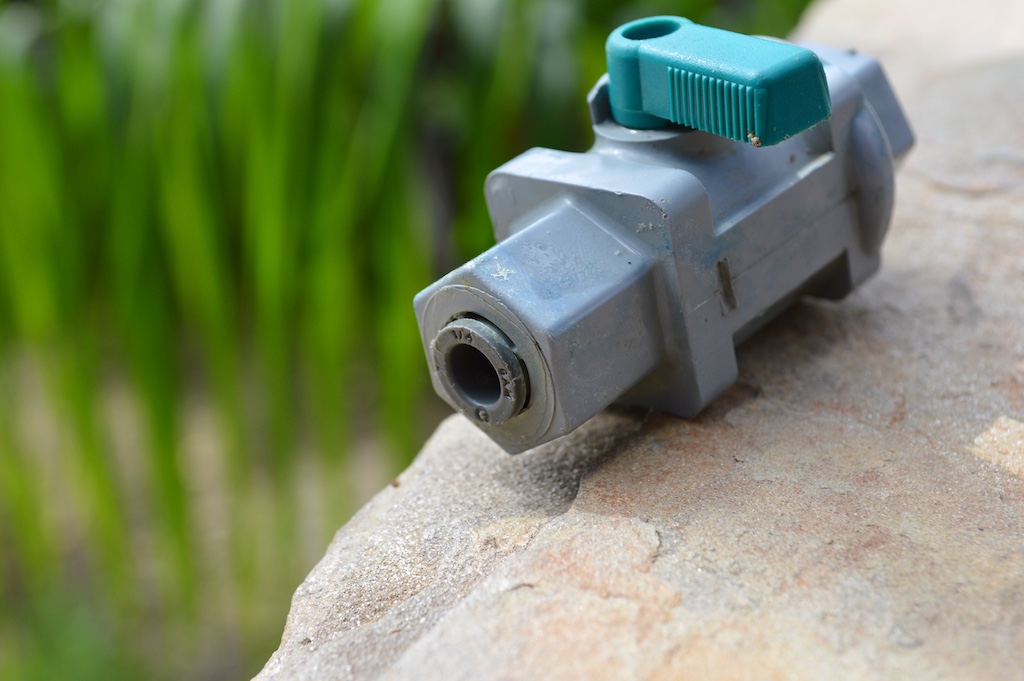 The learning point for me after this second occurrence is just to spend the money on a bunch of shutoff valves and regularly replace them and the poly tubing that they attach to. I will just have to take a ‘better to be safe than sorry’ approach from here on out.  I am not blaming EZ-FLO directly for this issue. But the mechanism required to run EZ-FLO is flawed in that it has too many single points of failure. It is just the nature of beast with how an EZ-FLO functions. So to limit malfunctions along one of those single points of failure it is best to make sure you regularly replace any parts that can fail. This includes both shutoff valves and all the poly tubing that runs from the connector nuts down to the slip coupling connection.

Don’t get me wrong, I actually really like the EZ-FLO main line units. In fact, I currently have four running on my one acre. I find great value in using their products and I happily refer people to them all the time. But I will warn you now that when it comes to running the EZ-FLO main line system, you will find yourself just as frustrated as I have at times. I believe you can reduce the chances of being frustrated by following the advice I have offered up here. Unfortunately, there are just too many single points of failure inherent with EZ-FLO to avoid the inevitable. Even the most vigilant person will find that the system will fail them at some point in time. 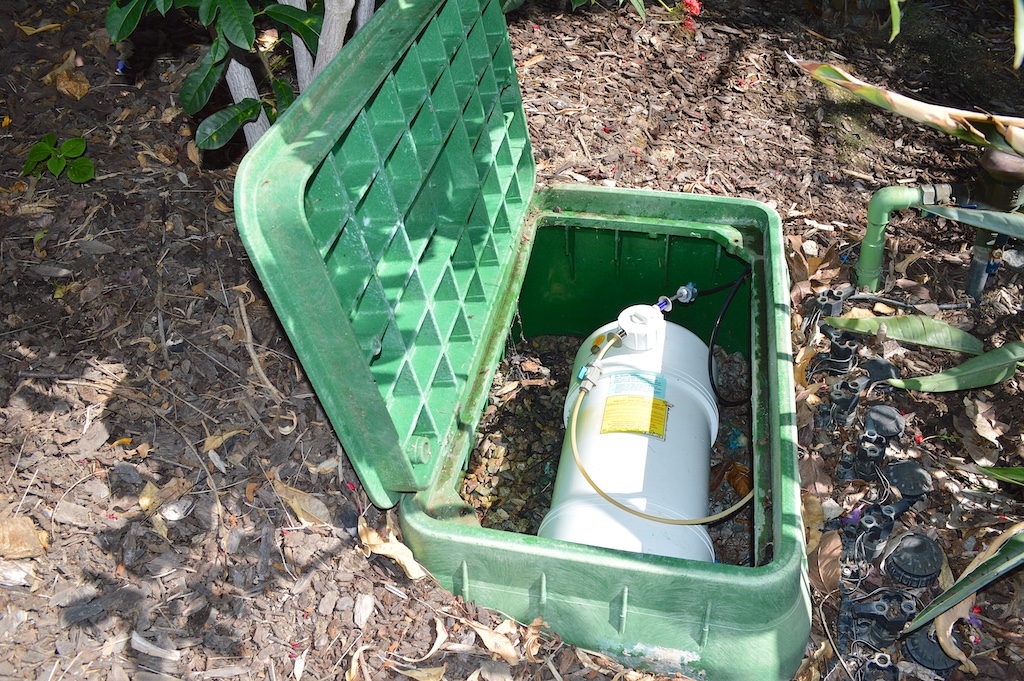 In a few weeks I will be writing up a review on the EZ-FLO main-line unit that will go into detail on some other positives and negatives I have with the system as well. Keep an eye out for it if you are in the market for a fertigation system and are considering EZ-FLO.