Almost ten years ago, when I started my garden, my landscape designer talked me into planting five large Phoenix canariensis (Canary Island Date Palm). He said that there was not a better show-piece tree that could be found for a San Diego yard. He said they were easy to care for and low maintenance past cutting off dead fronds once a year. Having seen them personally in many nice landscapes around San Diego and finding them to be one of the more magnificent palms myself, I was like, Sure, why not? After I saw the plans he had drawn up I was convinced I did indeed need five. Price? Irrelevant. I had already convinced myself I needed them.

Fast forward to today, and of those five I have two remaining. Three have died from Canary Palm Fusarium Wilt. Rewind a few short months back, to December, I took a photo of this seemingly healthy Canary Palm. But I have the eye of the tiger. That one-sided dieback is almost a certain sign your palm is in real trouble. 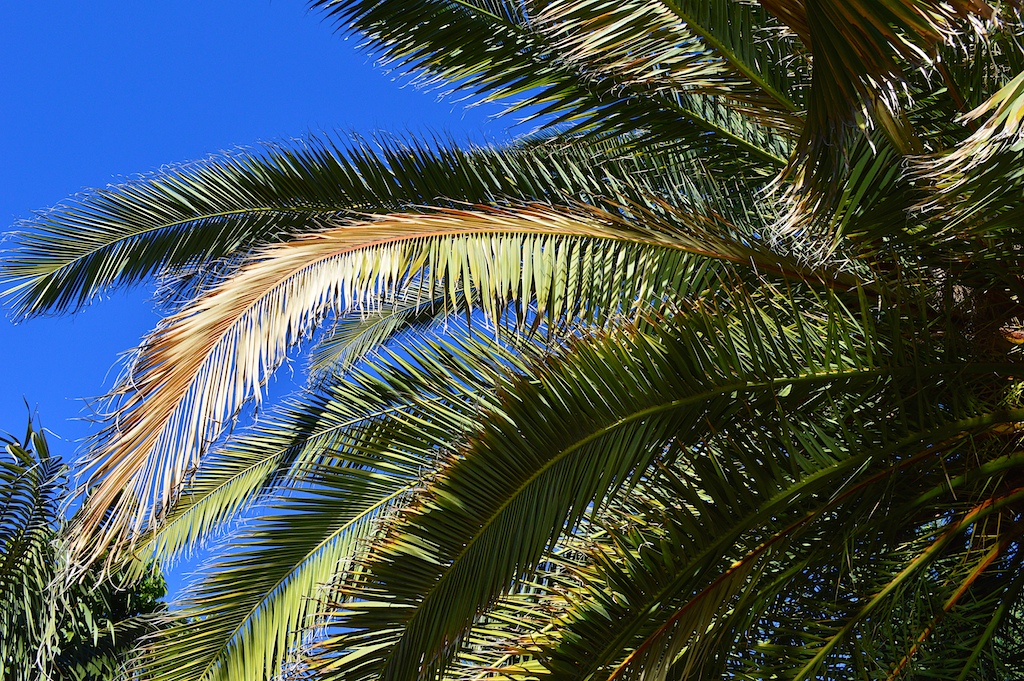 Here is my Canary Palm just over a month later. This disease can move quickly in some trees—as you can see here.

Here is one final picture of it before the tree removal crew started the process to oust it. It is a depressing sight to see such an old and majestic palm get a disease from which it has no hopes of recovering. Along with my three dead Canary Palms from Fusarium, there have been six others around the neighborhood that have also died from this disease. 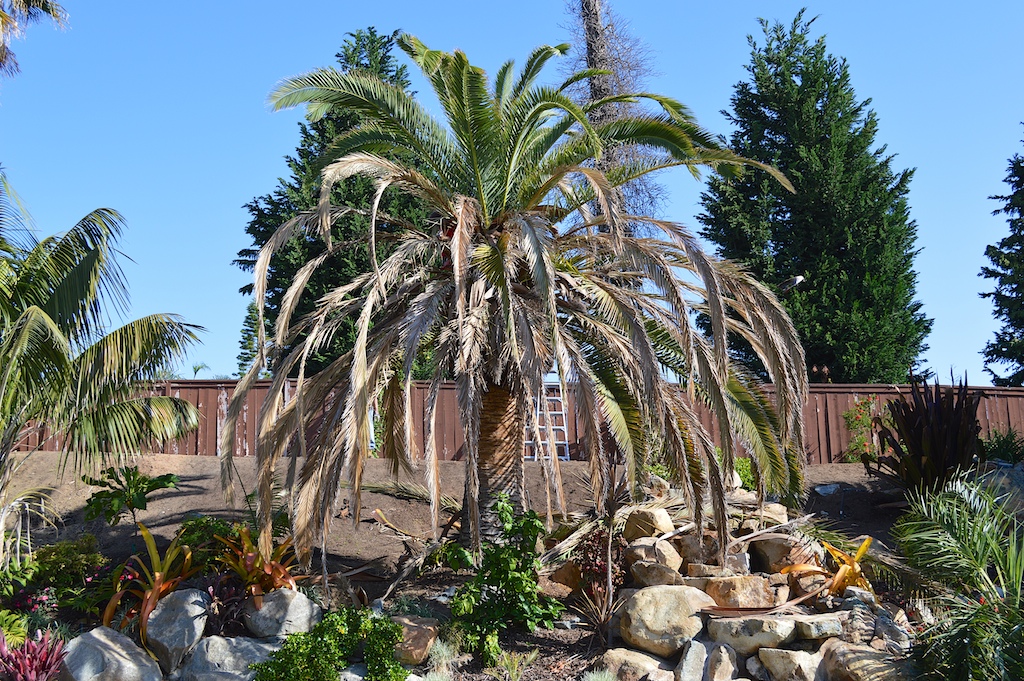 So what is Canary Palm Fusarium Wilt? The scientific name is Fusarium oxysporum f. sp. canariensis. The “f. sp. canariensis” means it is species-specific, and in this case it only kills Canary Island Date Palms. While other palms can get this Wilt, it is usually not a death sentence like it is with the Canary. For more details, you can visit the University of Florida’s IFAS Extension website.

My Canary Palm most likely should have been removed sooner, but I had to schedule the right people for the job. This tree was planted behind my pool and I had no confidence in getting a crane into the backyard to remove it, as I was able to do for my other two dead Canary palms removed a few years ago. I am lucky that I have two excellent maintenance guys in whom I have trusted my yard for years now. Scheduling for big jobs like this can take some time, however. The process I show here is not ideal, but I really had no other choice.

The first step was to cut off as many fronds as possible and drag them to the waiting dump truck.

Here it is with most of the fronds now removed. This will make it much easier to chainsaw to the ground. 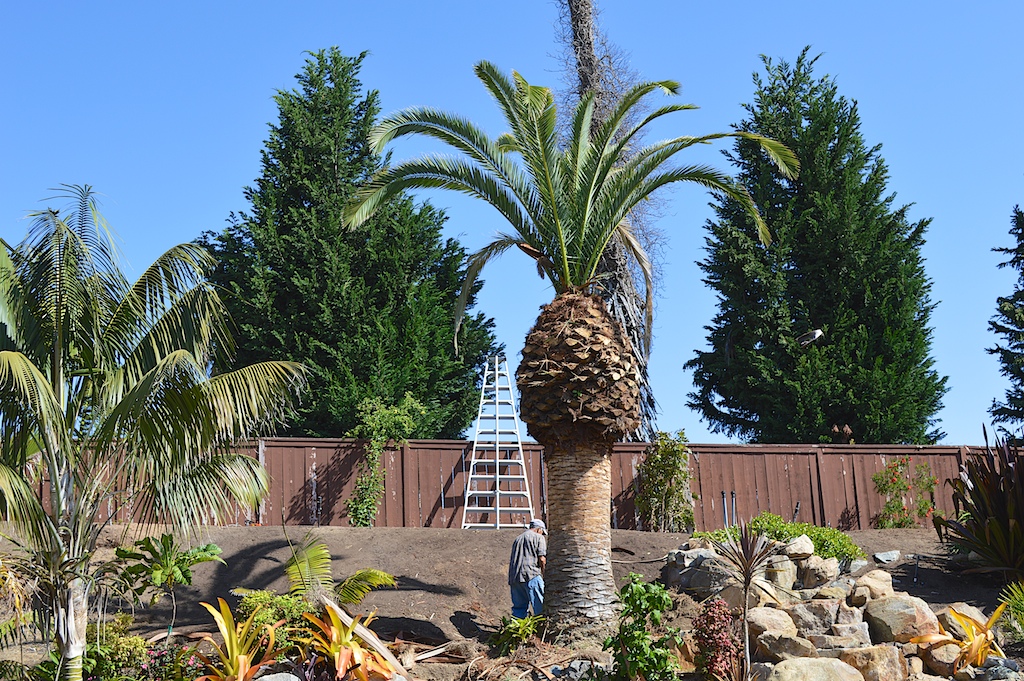 The next step was to break out the larger chainsaw. We also had to use one of the neighbor’s trees to tie a guide rope around my dying Canary Palm and his tree. This helped ensure the tree was felled in the exact spot we wanted. Everything went as planned and the tree crashed to the ground where we needed it to. 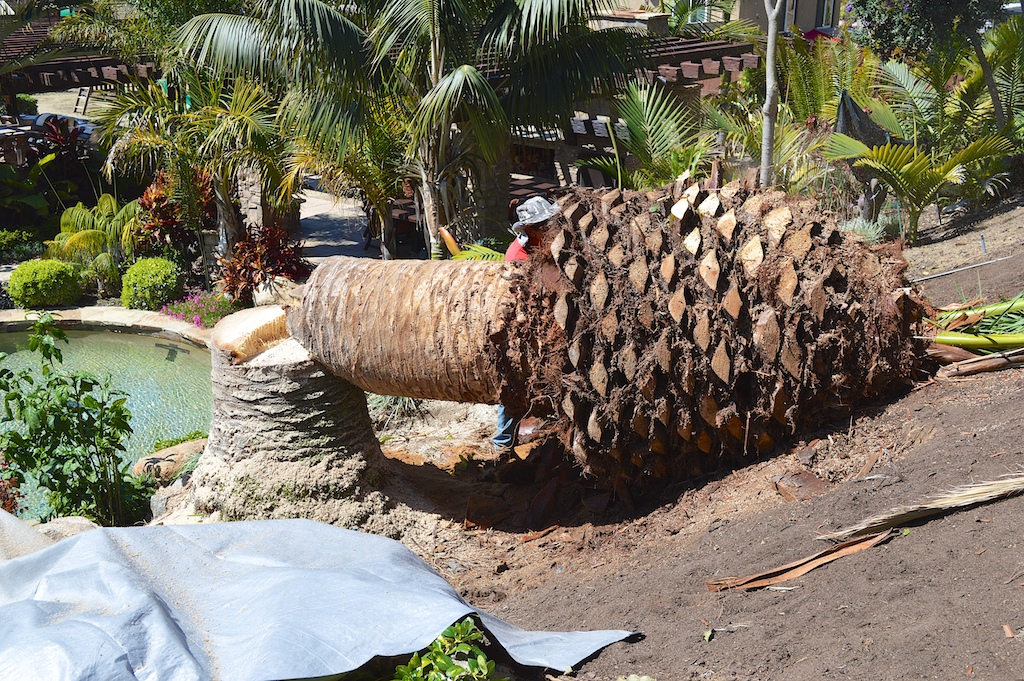 Once on the ground we could use the chainsaw to cut the tree up into smaller pieces. All these pieces had to be manually carried out—the smaller the pieces, the easier they were to remove. 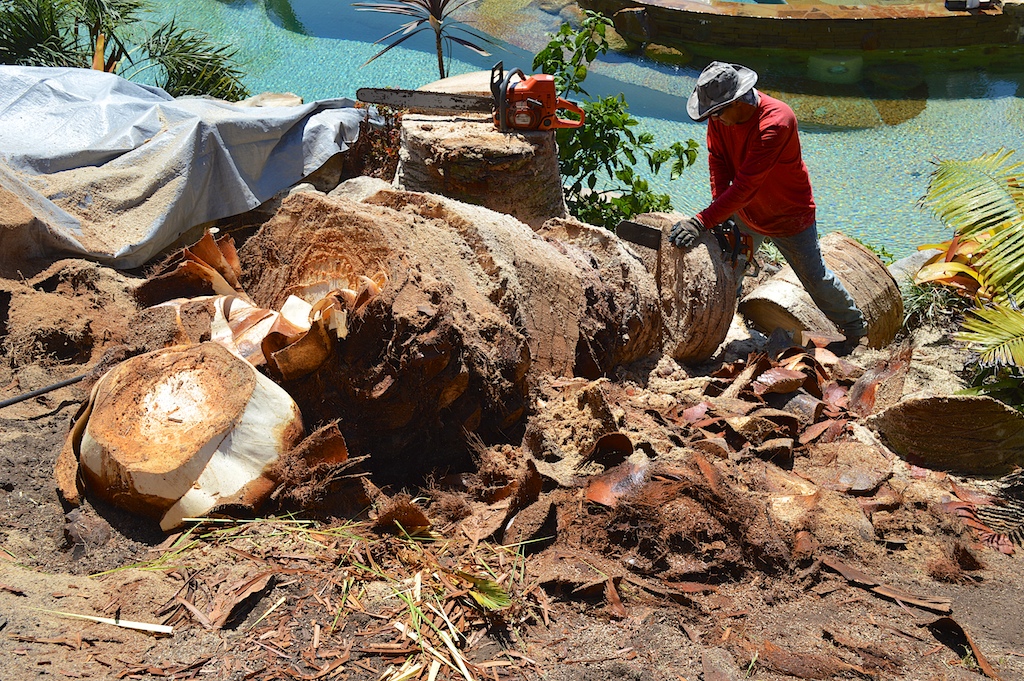 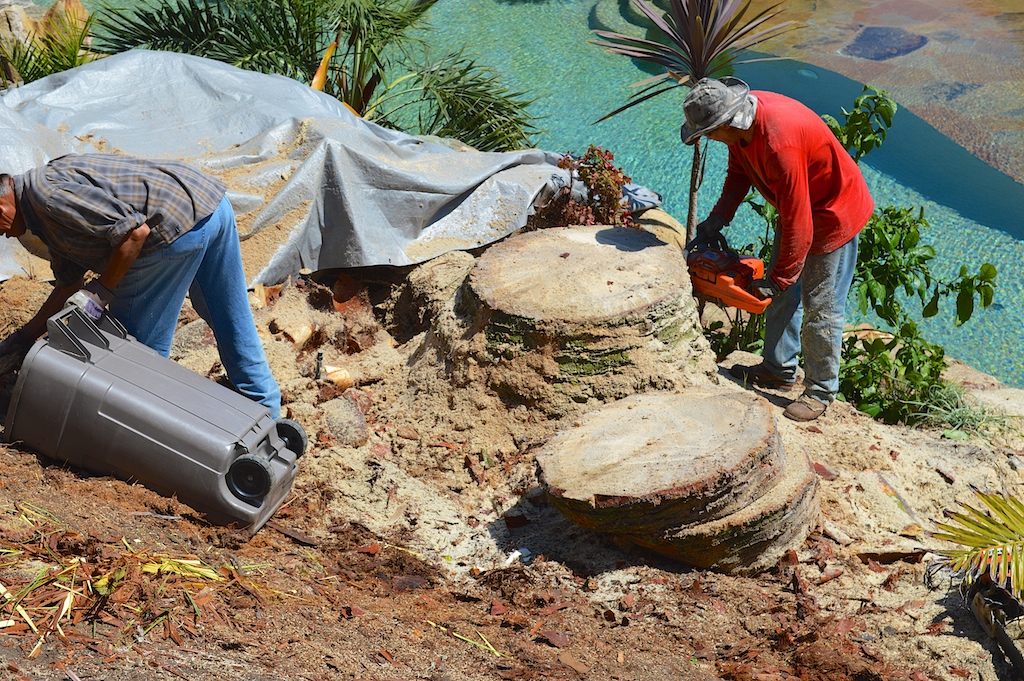 With the first day drawing to an end, I was left with nothing more than a stump. Pretty heartbreaking when I think back to what was once there. 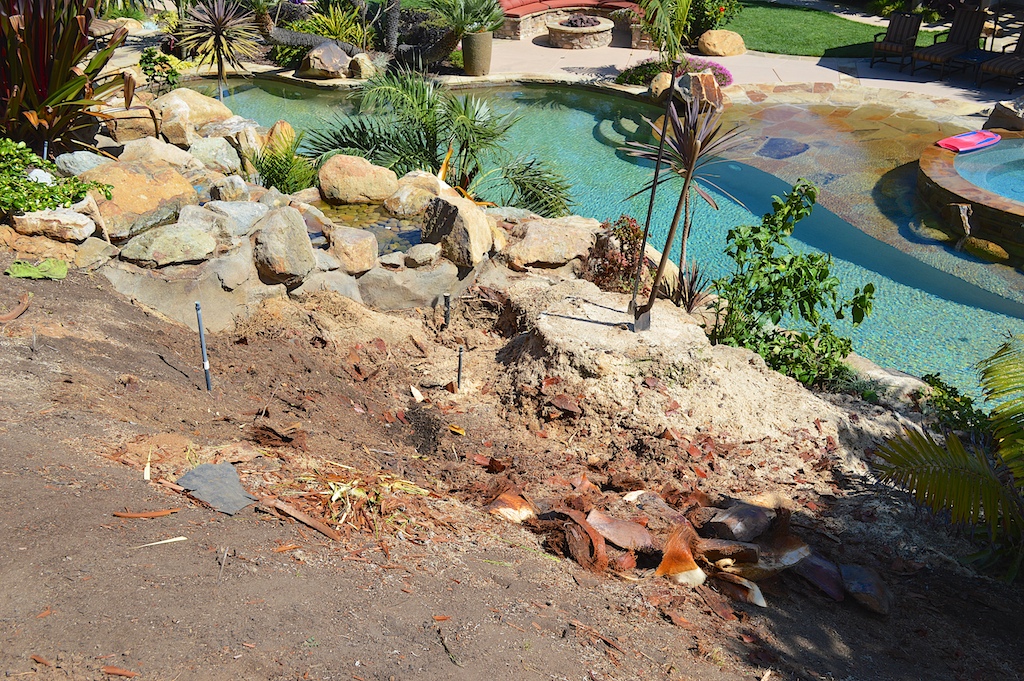 The next day (and the following day, to my surprise) was set aside to grind out the old stump and most of the roots. Many people will just cut the stump as close to the ground as possible and call it a day. They can then plant around it with shrubs to hide the evidence. I know of some that have even made a Tiki out of the old trunk. For me, however, this is a very important part of my garden and I will need to plant out the area in the future with more palms, so I couldn’t leave the stump and the roots where they were. Grinding had to be done.

The waterfall was covered with a tarp and the grinding area was blocked in with a sheet of plywood. 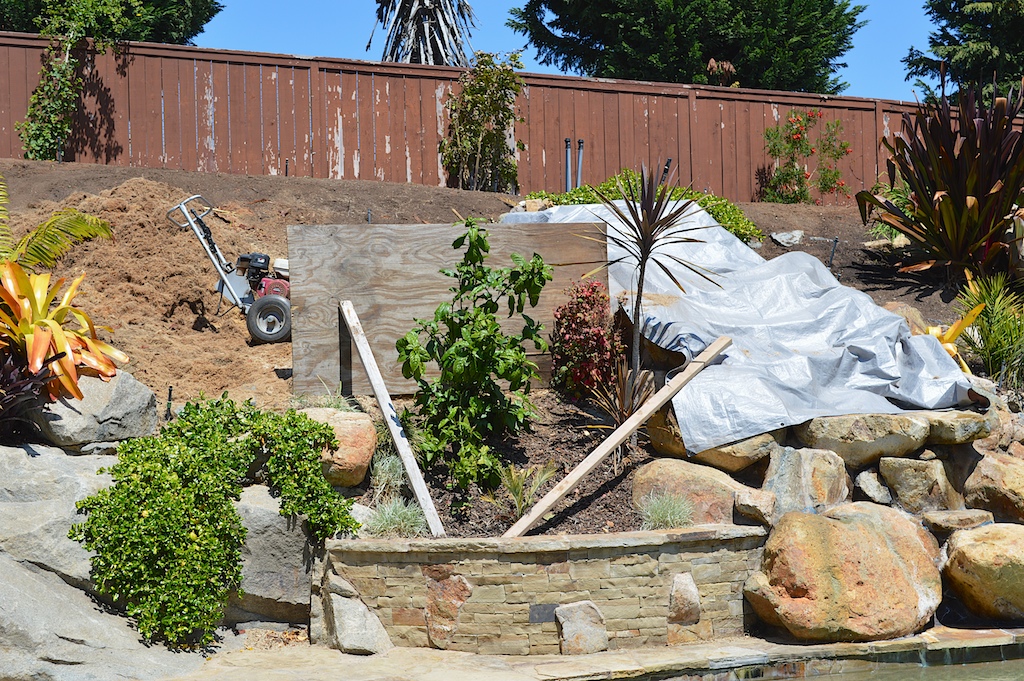 I was unable to get a large grinder up the hill so we had to settle with a smaller one. Here is the first rental we went through, to the right of the picture. The grinding took much longer then we anticipated. Towards the end of the second day we busted a belt on the orange grinder and had to call for a second one. The issue was that the fibrous stem and roots were just too much for the smaller grinder’s teeth to handle. The thing just kept getting clogged. 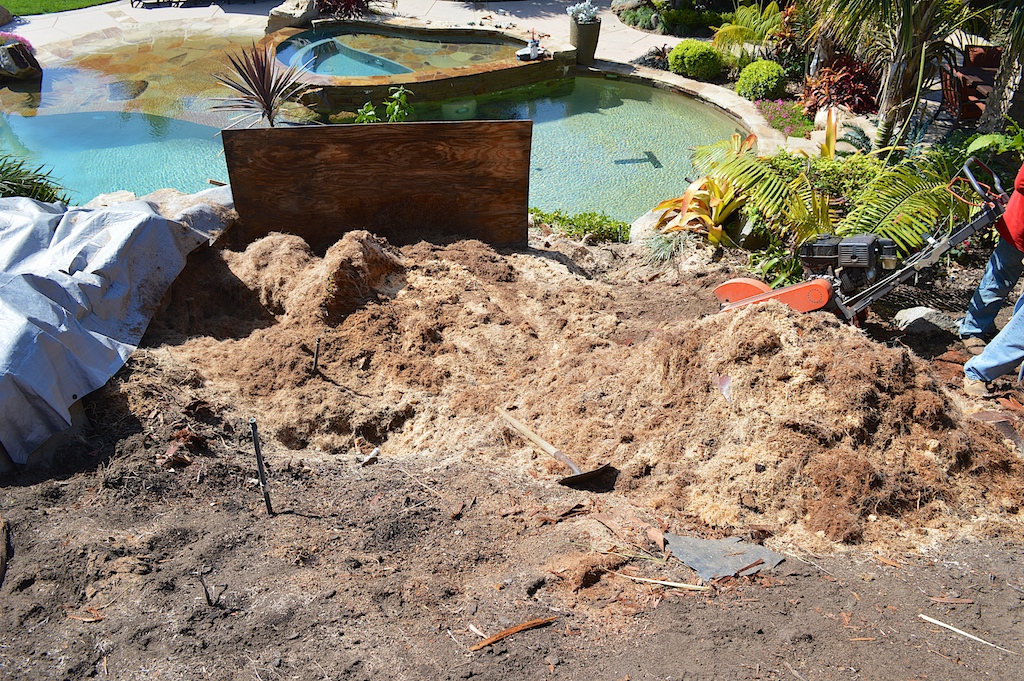 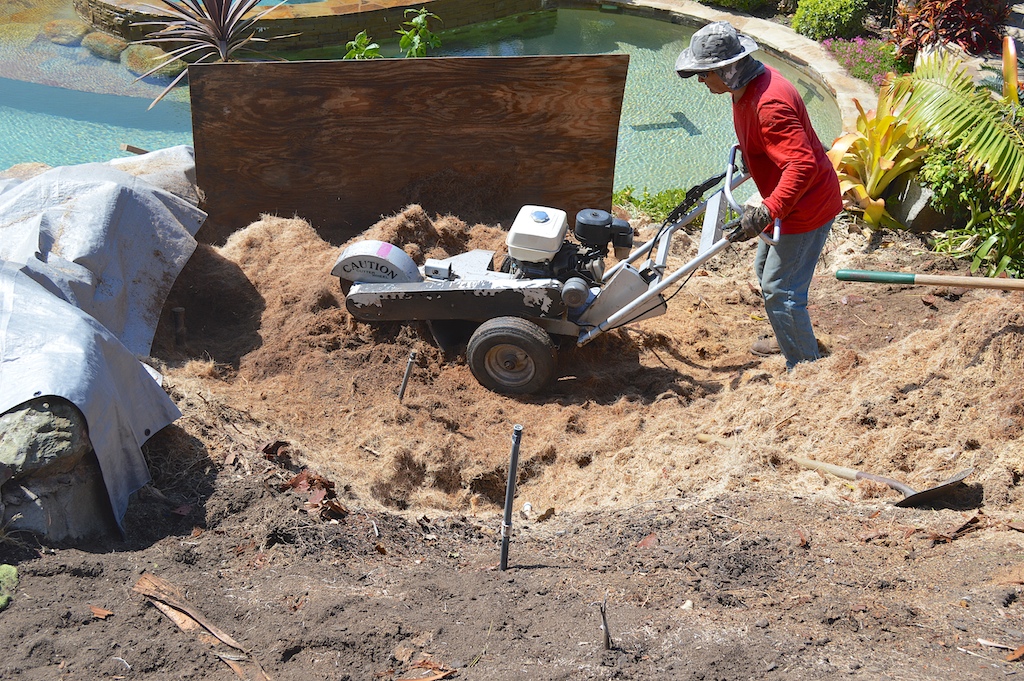 A third day and a second grinder later, we are now ready to finish. Here we are finally seeing some dirt, which means we are close to finishing. 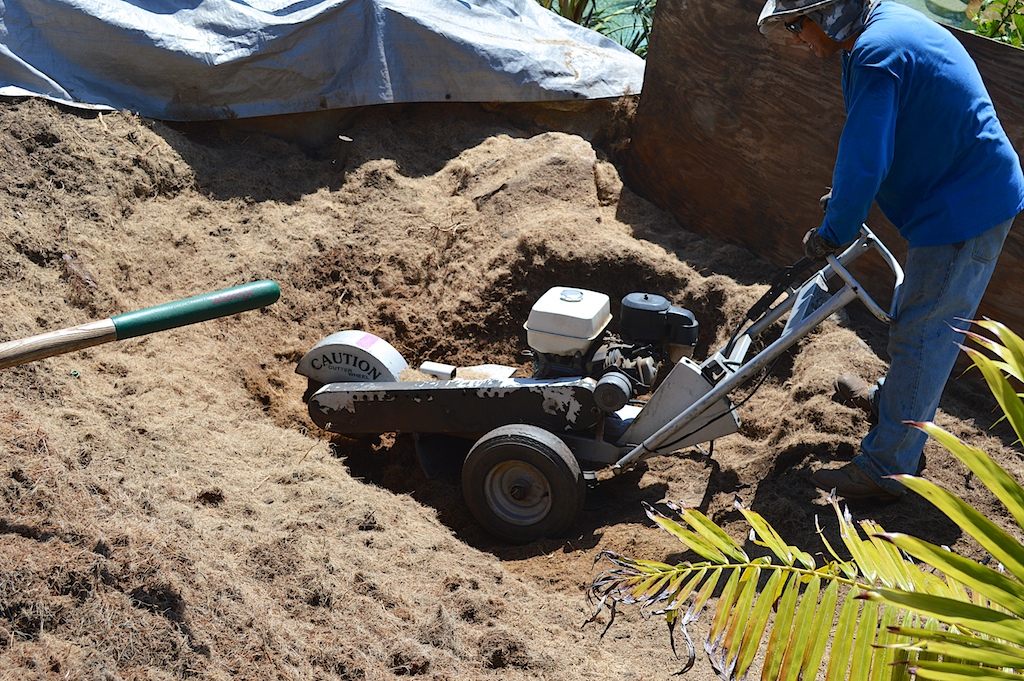 By the end of the third day, and after all the debris had been hauled to the dump, I was left with this. A 2-foot-deep crater that had once held a monstrous palm. 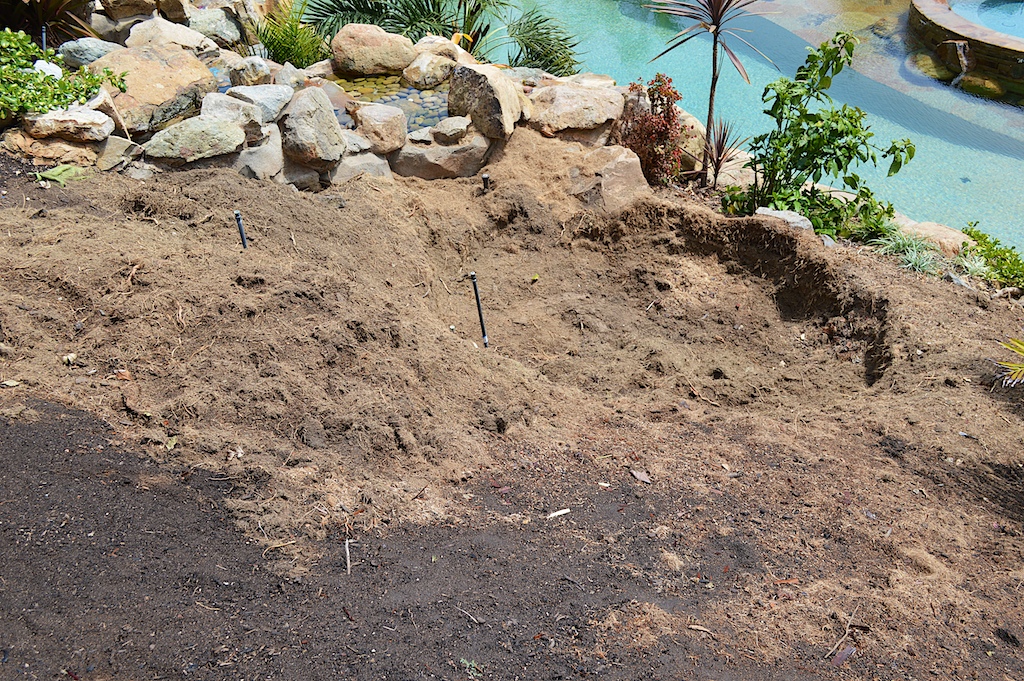 While difficult emotionally, Canary Palm Fusarium Wilt is just as painful to your wallet. After adding up all associated costs I had to cut a check for almost $2,000. When I think back to how much I actually paid for the tree to begin with, I could never recommend anyone building out a new landscape to plant a Canary Island Date Palm. Not only can they get Fusarium Wilt, but they also have a few more funguses that kill them, and might have to contend with the Red Palm Weevil, which has now been found in Southern California. Just too many maladies to risk the high cost, in my opinion.

Hopefully by the end of the summer I will have an update on the plantings I want to do where the Canary Palm was. I am still working on ideas…