While admiring the various agaves I have planted around my garden on a 85 degree February day, it became quit noticeable that the one I buy the most is Agave ‘Blue Glow.’ To me, it really is the perfect agave. The blue-grey foliage edged in maroon growing on a beautifully symmetrical 2′ x 3′ solitary rosette just can’t be beat. 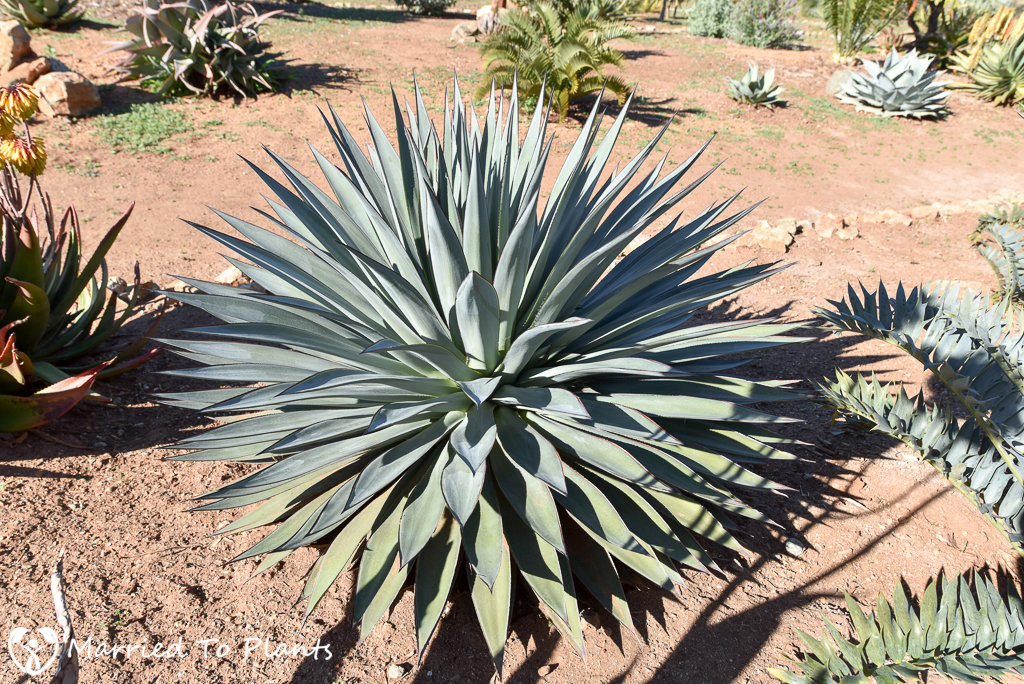 Yes, I understand there are many agaves that could fit under that same description. But when you throw in the fact that Agave ‘Blue Glow’ doesn’t pup profusely, nor does it send out running suckers, that gives it a leg up on the competition. There are some gorgeous agaves that can rival Agave ‘Blue Glow,’ but I personally grow tired of cutting out the suckers or runners from those plants. Another positive some might find is that Agave ‘Blue Glow’ has no other spines past the colorful terminal spine. Less chances to poke yourself working around them. 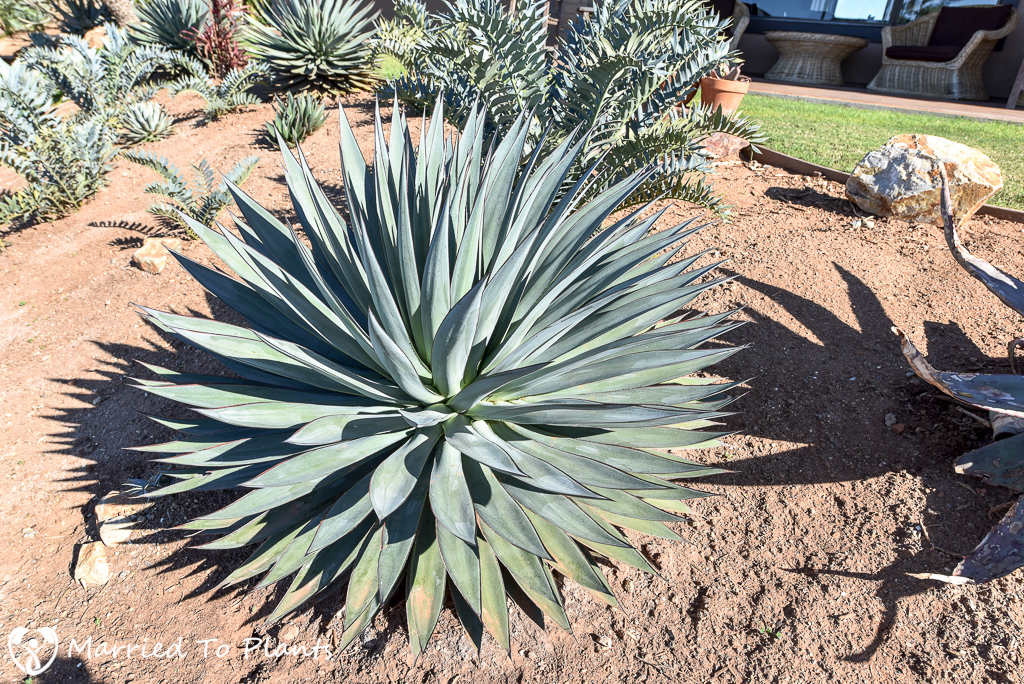 Agaves typically flower only once every 15-25 years. You will hear or read about the same for Agave ‘Blue Glow.’ I can tell you, if there is one negative to Agave ‘Blue Glow,’ it is that it grows quickly and flowers at 8-10 years old in a fertilized garden in the ground. This agave below was planted as a 3-gallon plant only four years ago. It is already flowering. Agaves are monocarpic, which means the flowering rosette will die. Almost all agaves will send out pups or suckers, which allows the plant to live on through new rosettes in your garden. As I already stated, Agave ‘Blue Glow’ doesn’t really sucker, and that can also hold true after flowering. I have been able to propagate some after flower and others just die with no suckers. The best way I have found to propagate Agave ‘Blue Glow’ is by waiting for the flower to produce bulbils (tiny plantlets growing right on the flower stalk). Time will tell how many bulbils I will get on this newly flowering Agave ‘Blue Glow’ in my garden. 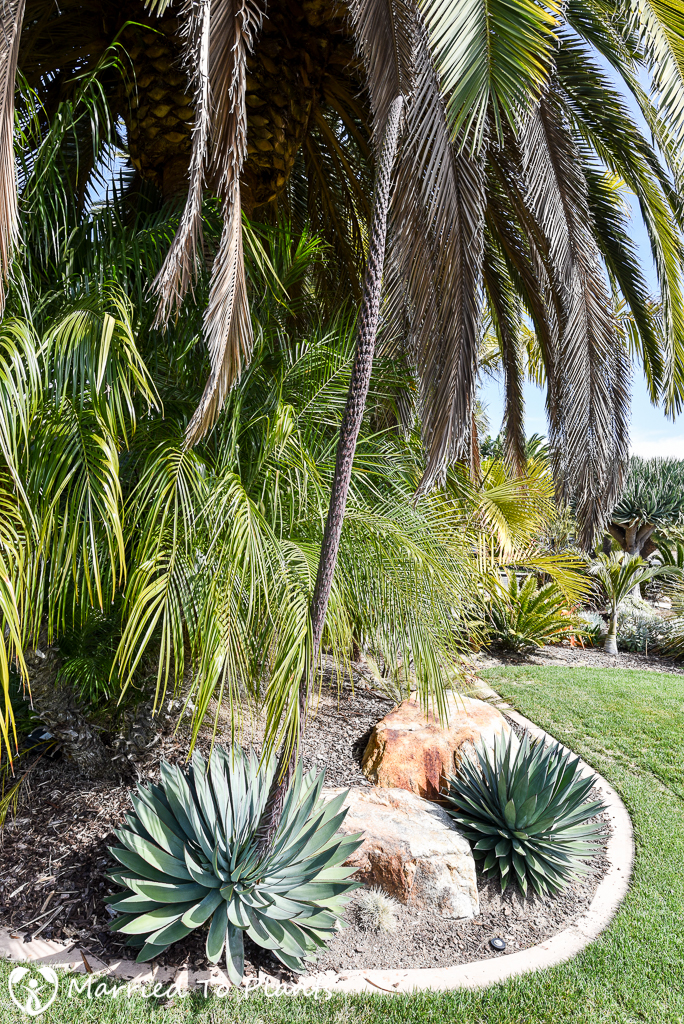 Here is a plant currently in flower at a friends garden. 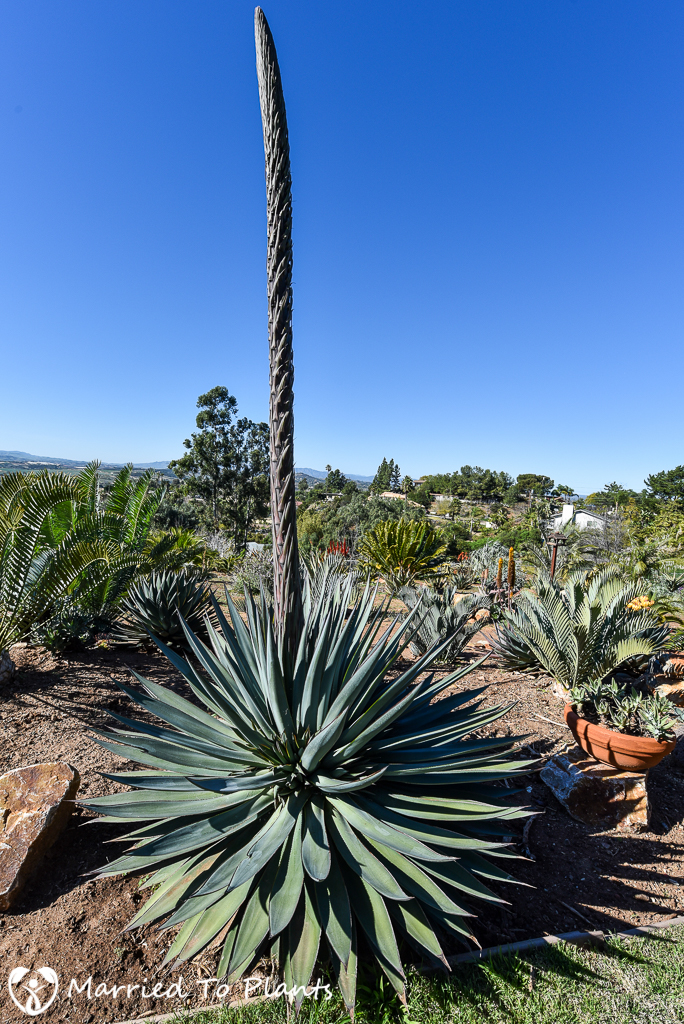 Just like in monocarpic palms, the entire growing point becomes the flower. This means the plant can no longer produce leaves to continue its growth. Plus, the plant expends a lot of energy to put out such a large flower. 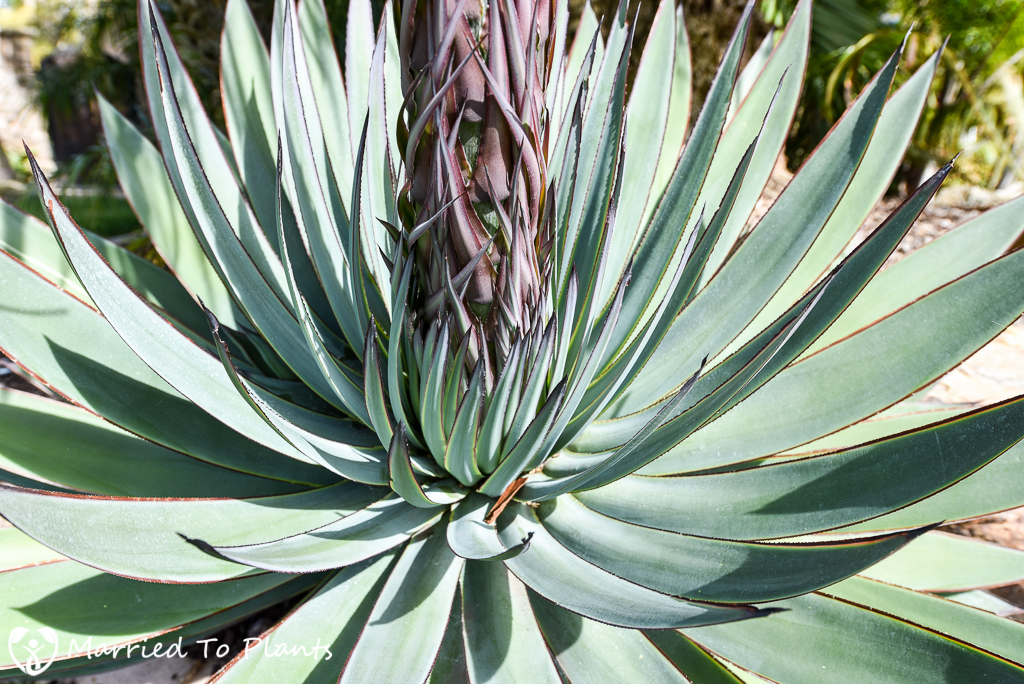 During the flowering stage, platelets begin to emerge from the agave. Sometimes these can be cut out and rooted. 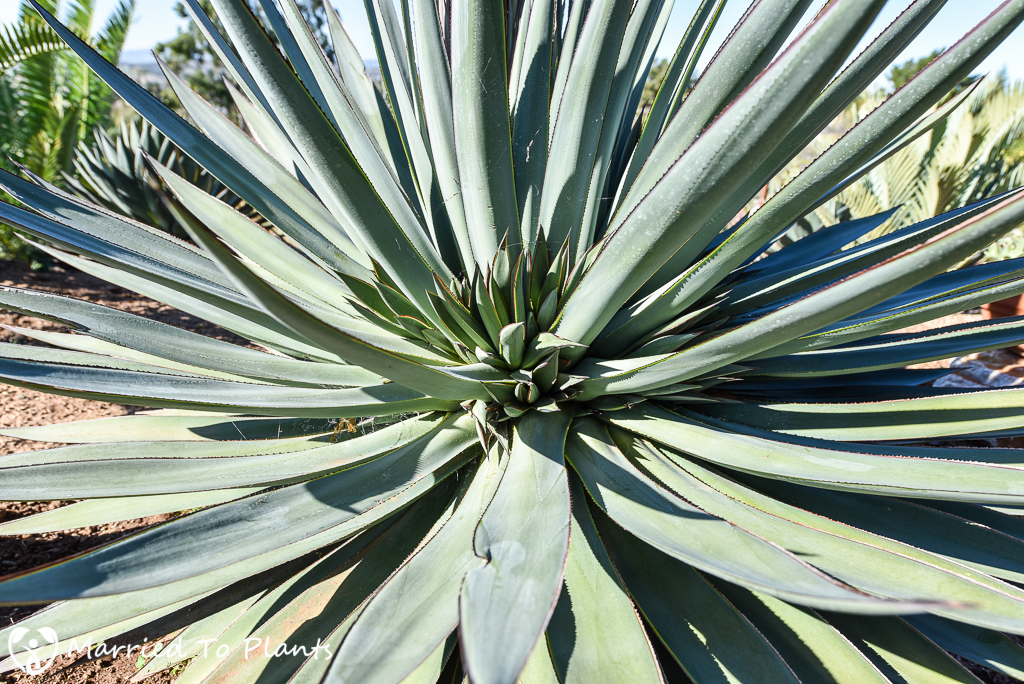 In gardens, architecturally speaking, agaves are one of the nicest plants you can place. I personally find that Agave ‘Blue Glow’ works great in many settings. It is a strong plant, capable of handling many growing environments. For example, the plants that are in the ground in my garden receive the same mount of water as the palm trees sharing a sprinkler zone.

At a friends garden shown below, he mixes in many Agave ‘Blue Glow’ into his landscape. 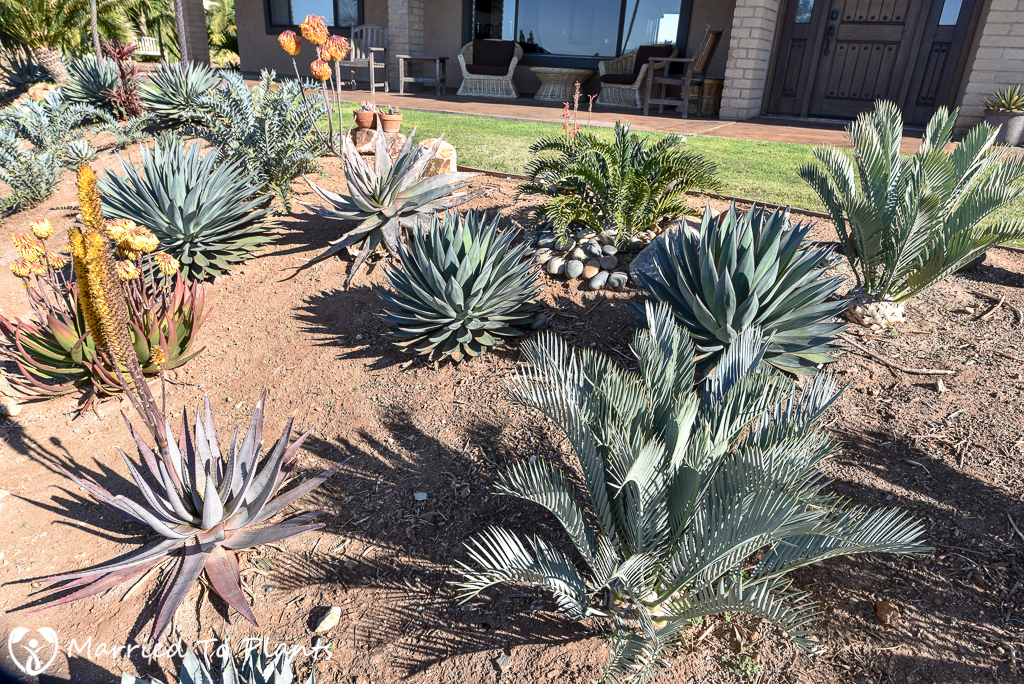 This is a nice public planting outside California State University San Marcos. 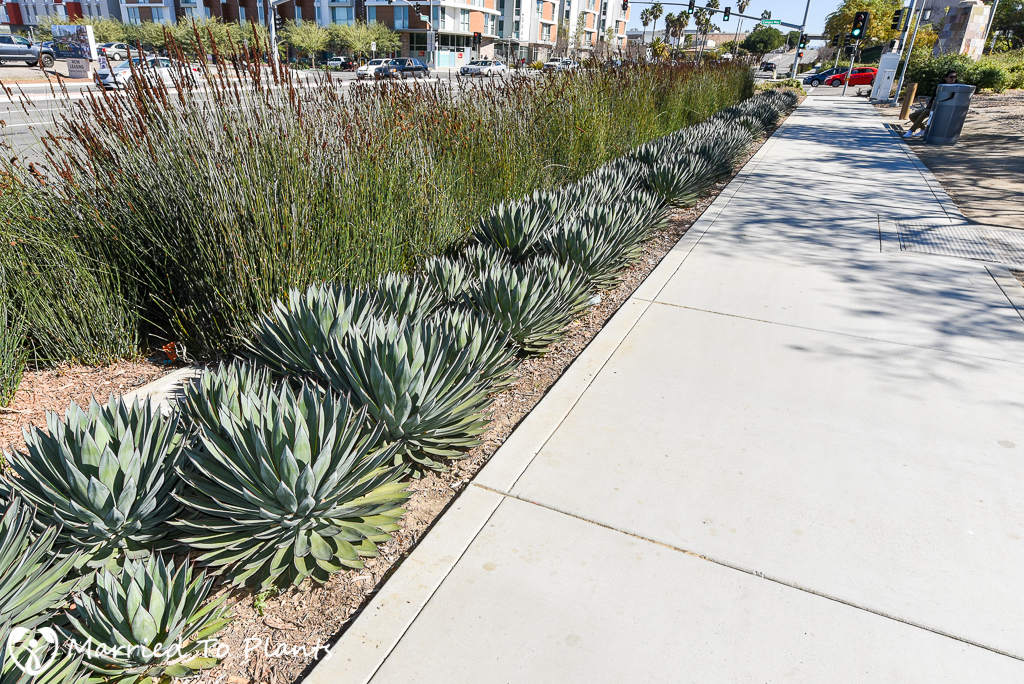 Agave ‘Blue Glow’ gets its name from the “glow” the leaf margins show when backlit by the sun. 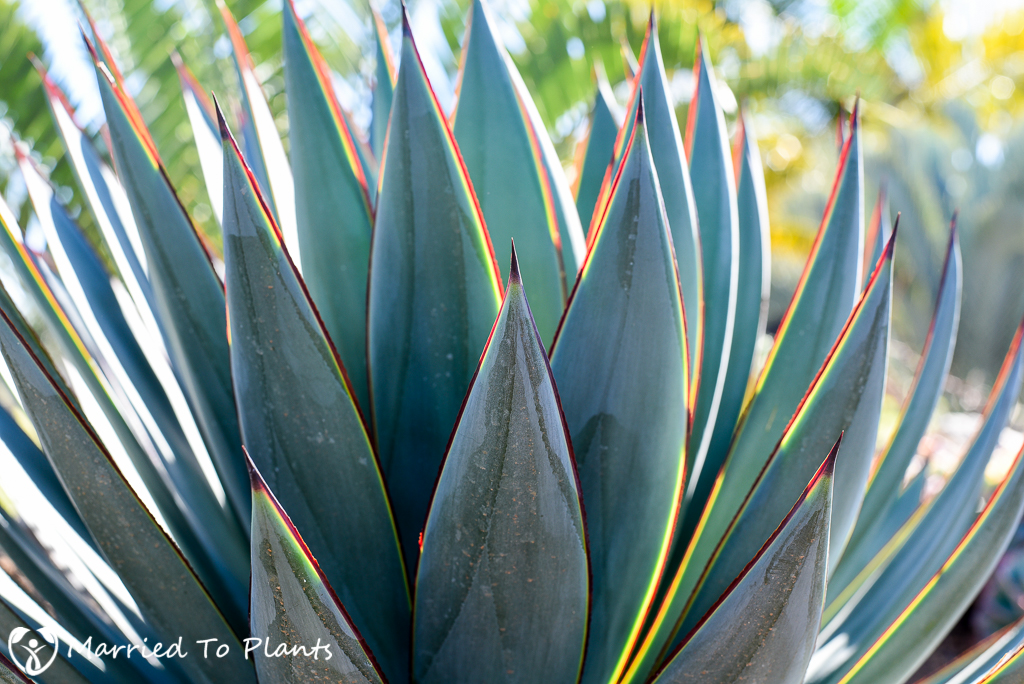 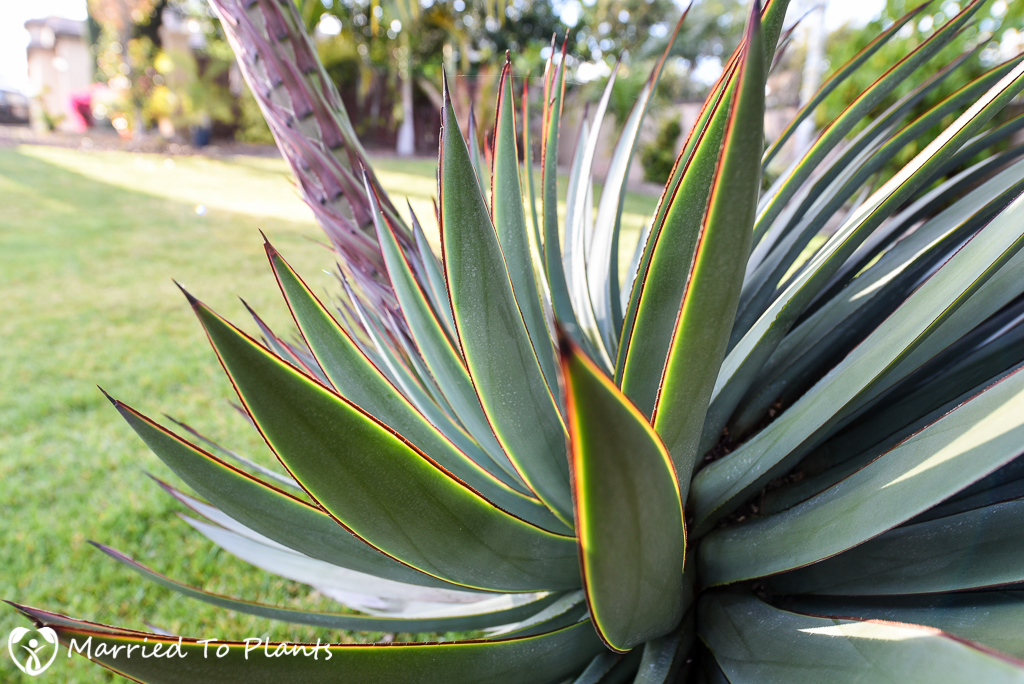 Almost every agave species or hybrid sold nowadays has variegated forms available as well. Agave ‘Blue Glow’ is no different. I currently have five different variegated forms. The most common is a yellow albo-marginated form coined Agave ‘Sun Glow.’ I also have a white albo-marginated form coined Agave ‘Snow Glow’ which is still a small plant and I didn’t get a photo of it. 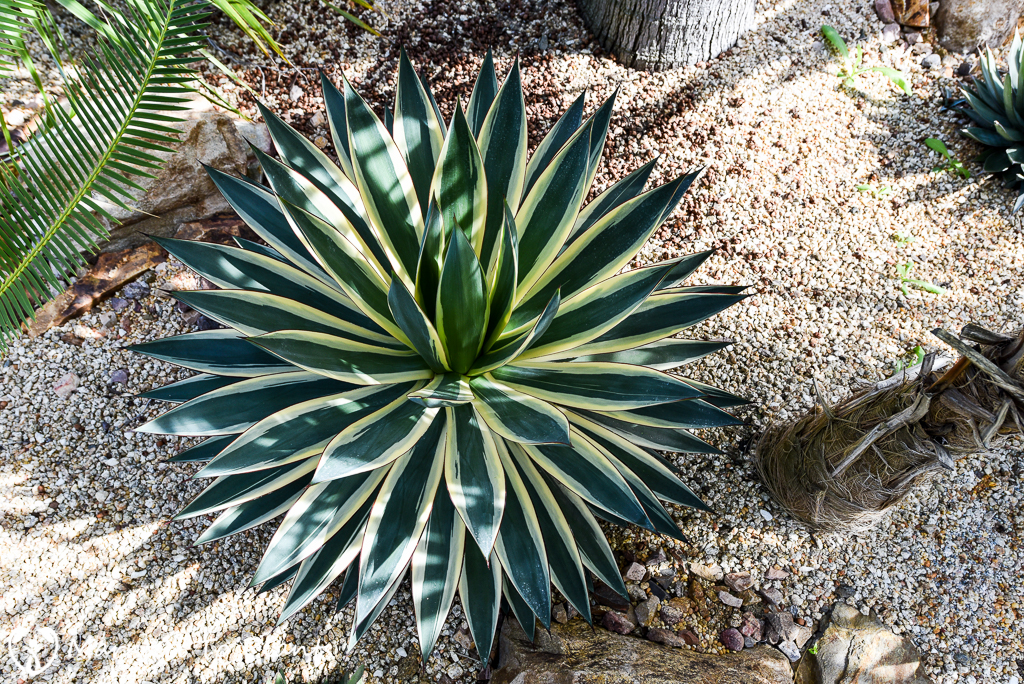 This is a half-moon Agave ‘Sun Glow’.

The most expensive Agave ‘Blue Glow’ in my collection is this rare mediopicta variegation form. 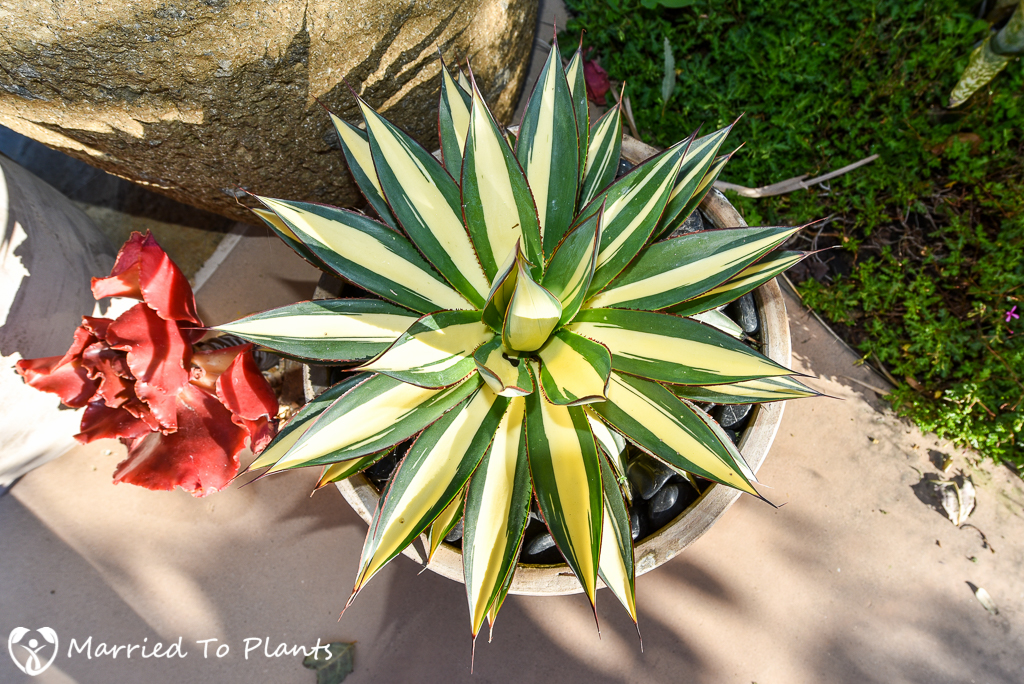 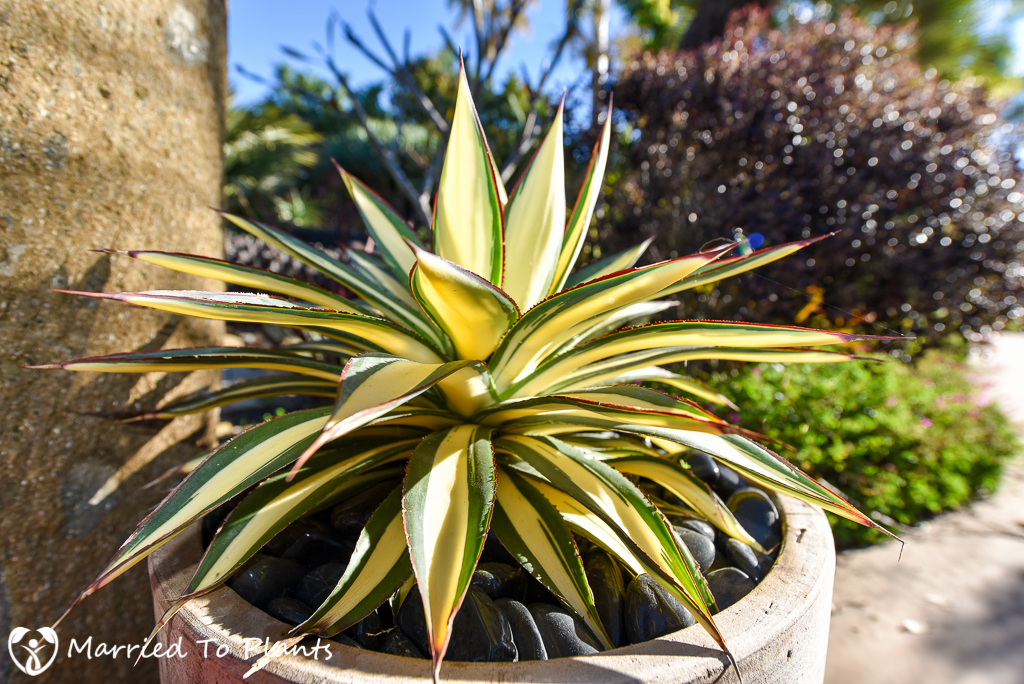 While my plant is very nice and I am proud of it, it can’t compare to my friends show-quality example of perfect mediopicta variegation. 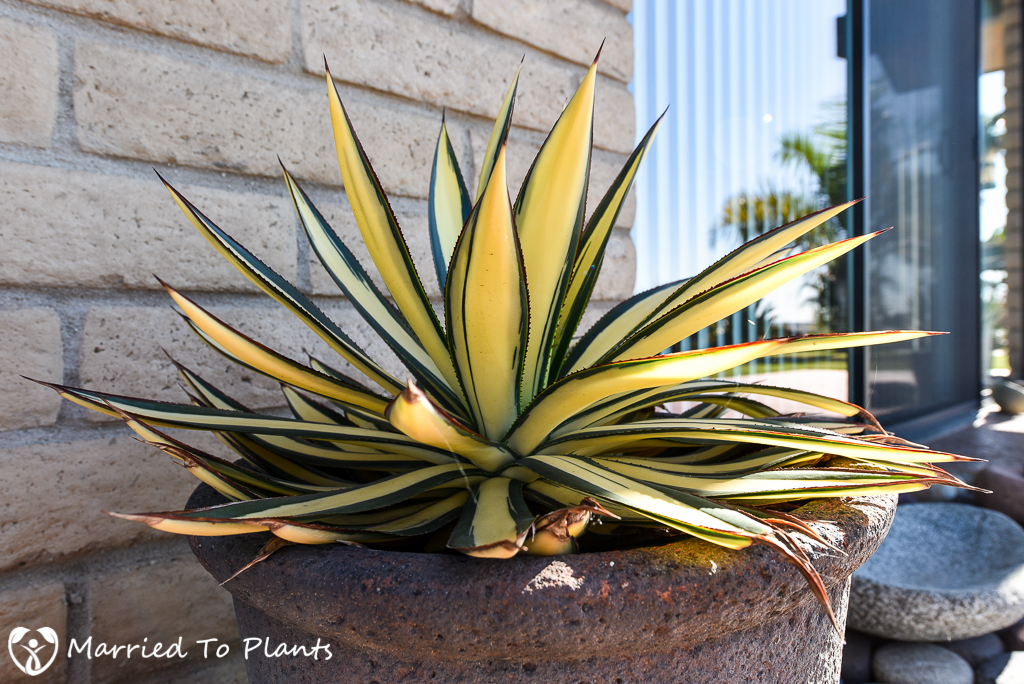 My personal favorite is this striata variegation Agave ‘Blue Glow’ in my collection. 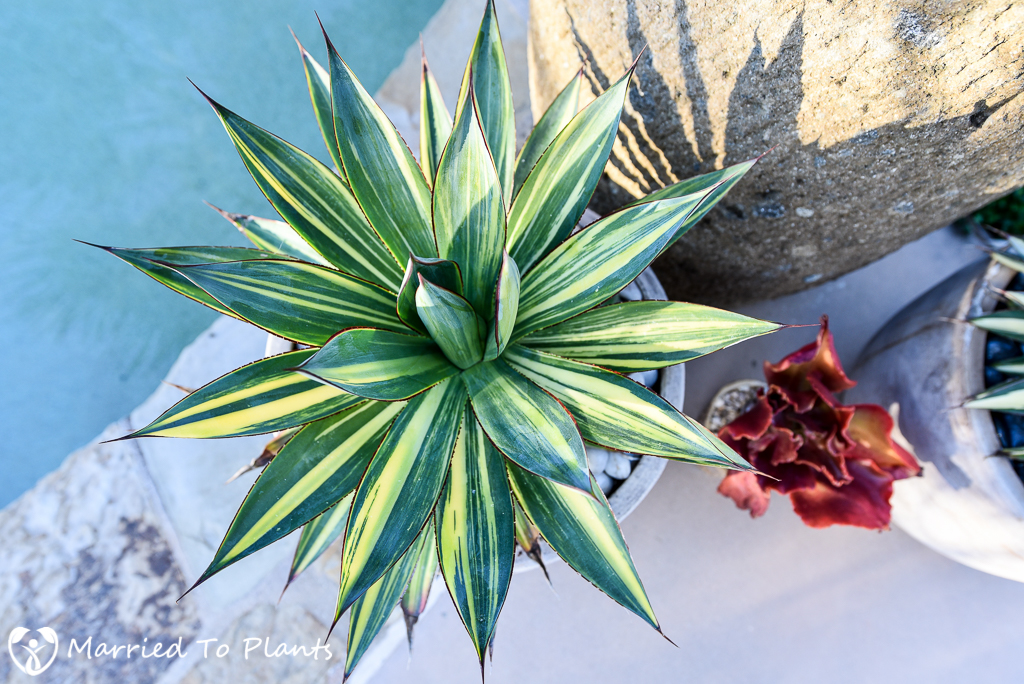 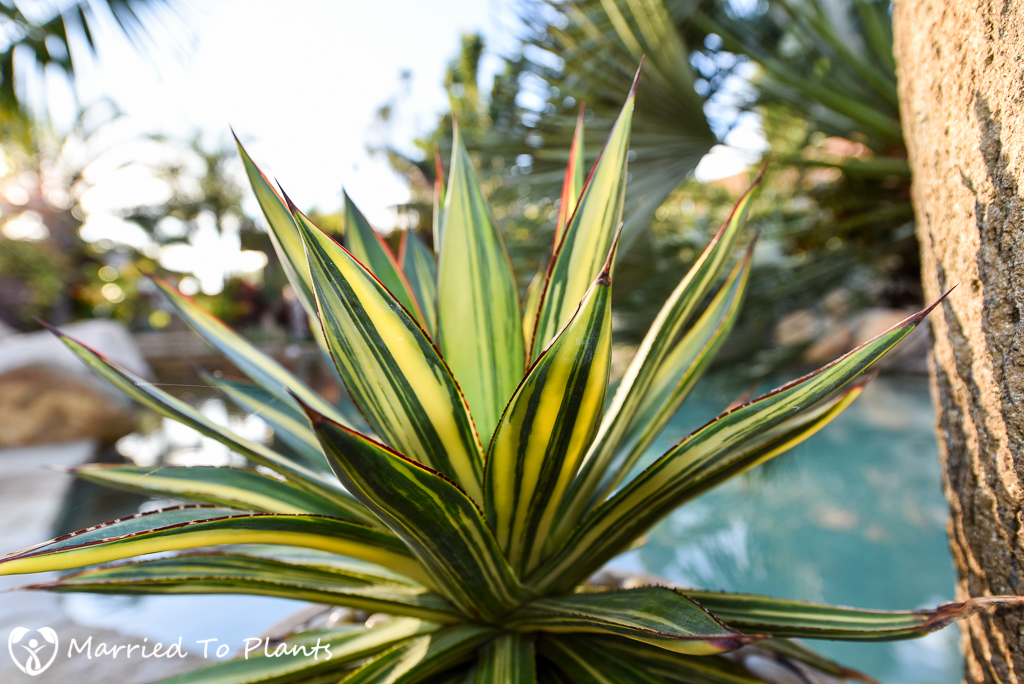 My newest plant in the collection is this half-moon mediopicta variegation Agave ‘Blue Glow.’ 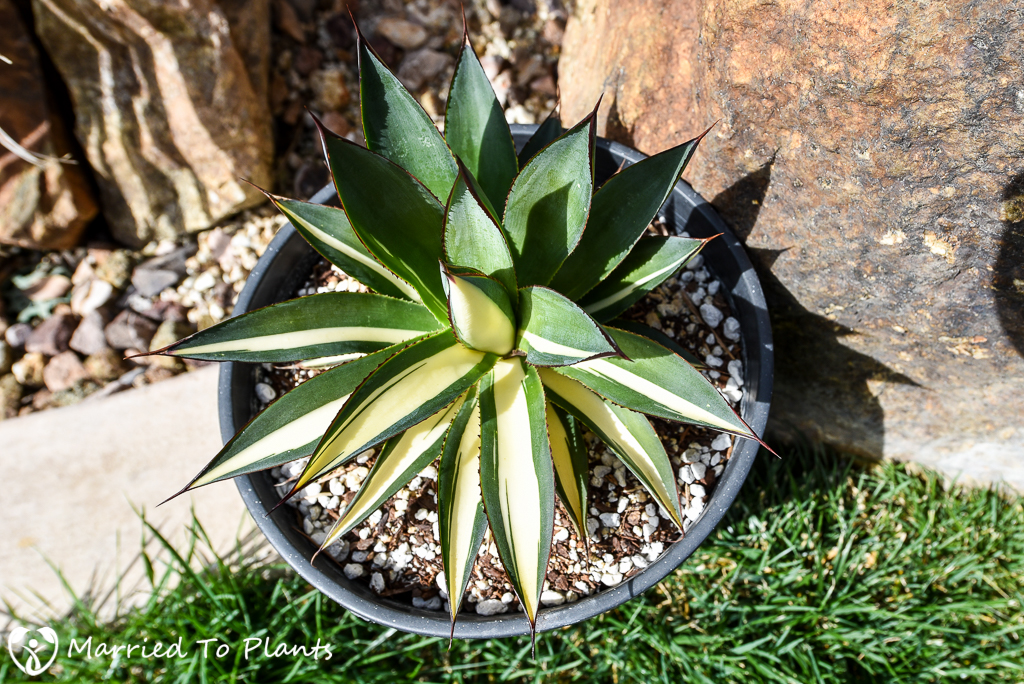 Agave ‘Blue Glow’ will grow much slower in containers. So these rare variegates are planted in pots so I might enjoy them longer before they flower.

So what do you think? Is Agave ‘Blue Glow’ the perfect agave?

A nice crop of bulbils has formed on my flower stalk. I will let them grow a little larger before pulling off the nicest ones and rooting them out.

Click here to read my blog post on the propagation of agaves that I wrote using these Agave ‘Blue glow’ bulbils above as the subject.

I took this photograph of my mediopicta variegated Agave ‘Blue Glow’ about 30 minutes before sunset. I love this photo and had to share it in this post. 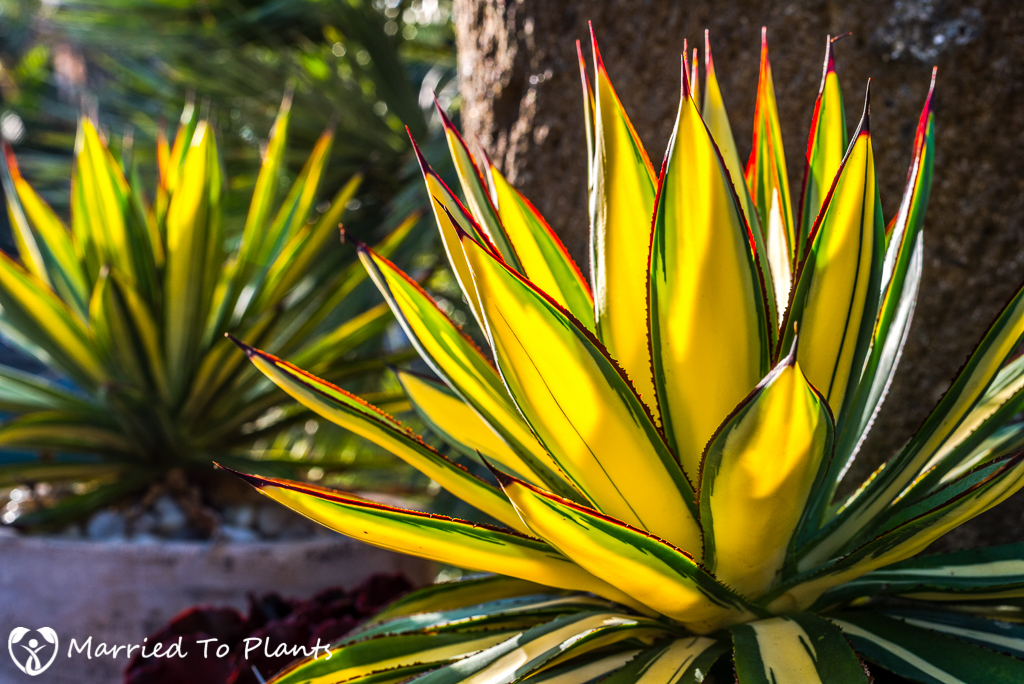