Architecturally speaking, few plants are more exemplary in a landscape than an agave. Uniquely shaped, tight rosette of leaves, clean lines and nasty spines give the agave its highly architectural appearance. The perfect plant for landscapes where this strong architectural form is desired. While they look great planted right into the ground, I personally find them much more notable in pots. This works out better anyway for those with no more room in their garden for another plant. Some of my favorite agaves in pots in my garden include this small variegated Agave bovicornuta. 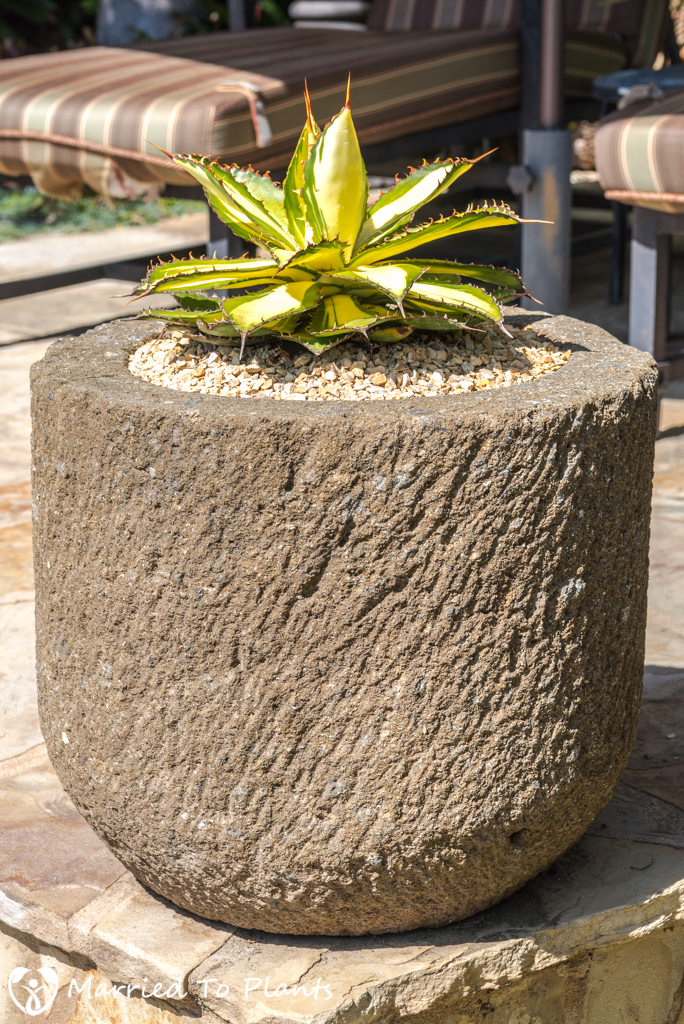 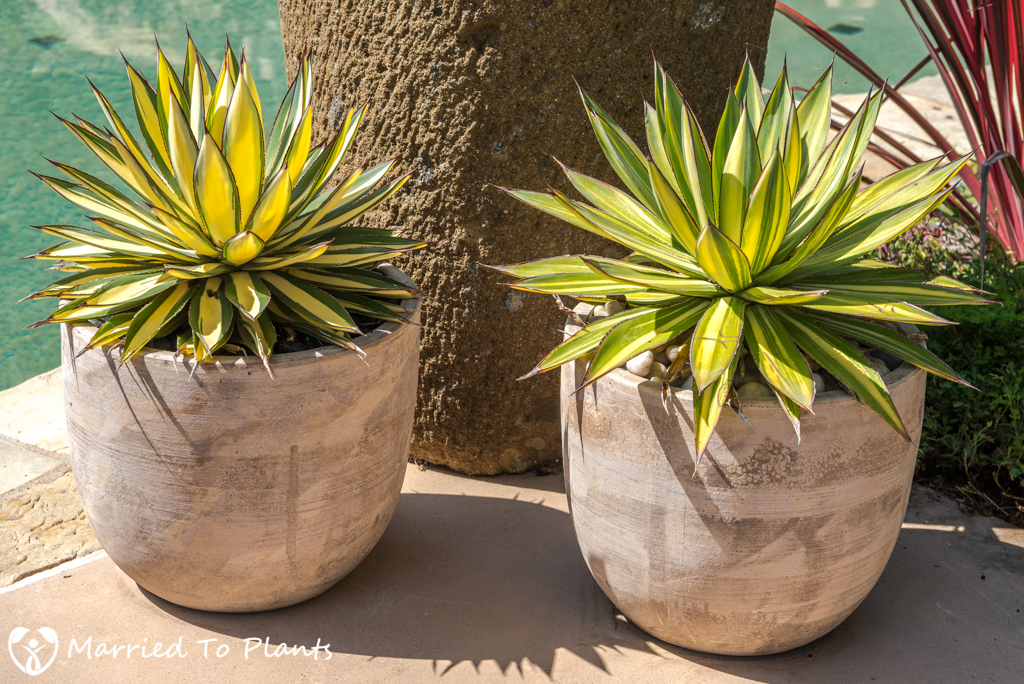 Plus this variegated Agave attenuata.

Right now for me it isn’t an issue of not having enough room in the garden to plant more agaves, but rather it is more of an issue of not wanting to lose them in the landscape. I feel they can be squandered when planted outside a rock garden and into a more traditional planter bed with mulch. My solution has been to integrate pottery into the garden and use agaves as the desired plant for those pots. I have had two areas in my yard where I have wanted to add more agaves in pots, and this last week was the time to make it happen.

The first spot I wanted to add some agaves was along the side of a small embankment along a fence I share with a neighbor. I have been slowly fixing this part of the garden up and I am close to finalizing all plantings. 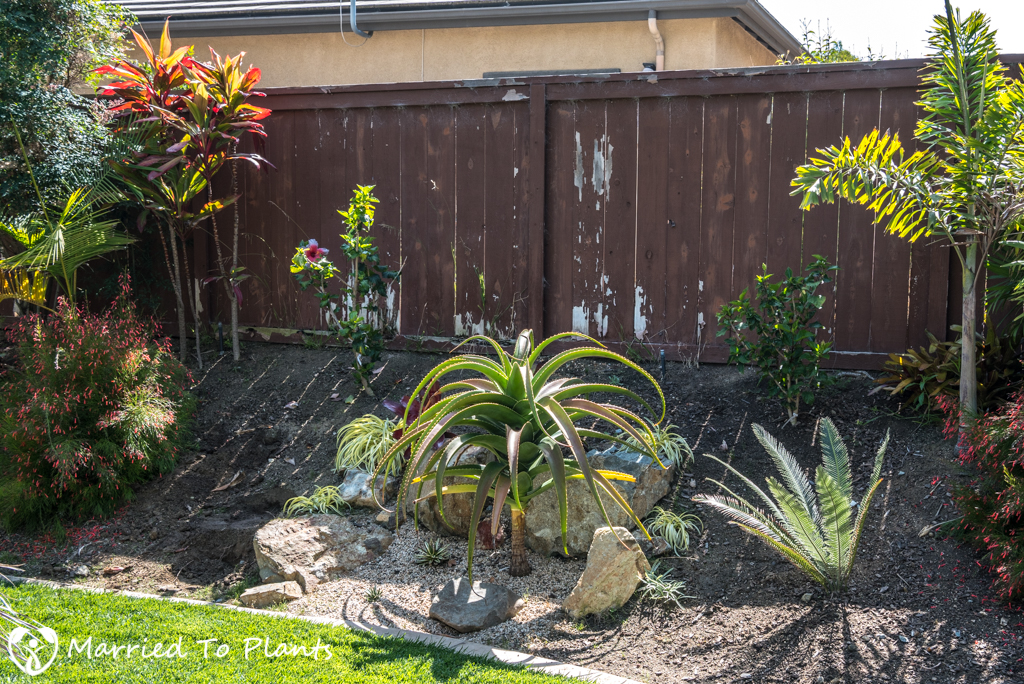 As I wrote about last year, true blue is not a color you can get naturally in a garden. So it must be introduced. I love doing this by using blue pottery.

These two Agave isthmensis hybrids were waiting for a new home at the nursery and were the perfect size for my new pots. 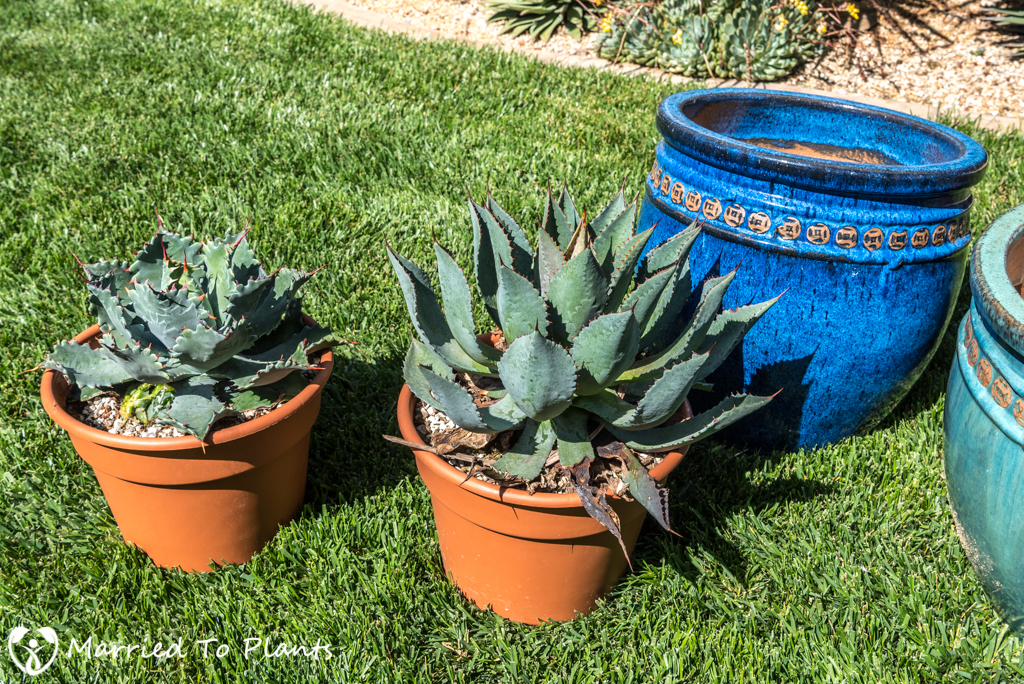 Before starting this project I measured to see what the largest sized pots I could use to fit three in a row on the side of the embankment. It worked out perfectly that I could buy the larger 15-inch diameter pots. 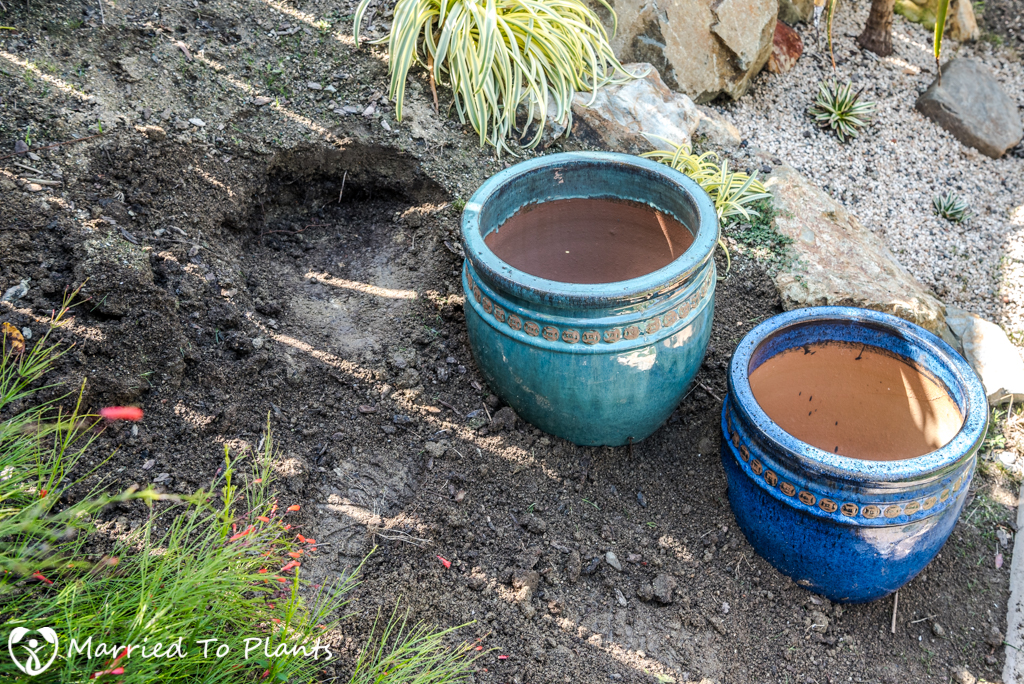 Once placed, I used a level to make sure they were properly set. I am a bit of a perfectionist.

I always use gravel as a 2-3 inch base in all my succulent pots. I find that it provides a medium which prevents the mush build up that can happen as the potting soil breaks down over time. It also makes it much easier to remove the agave once it has grown too large for the pot. The gravel stays loose in the pot and keeps the roots from wrapping around the bottom of the pot and locking the plant in. 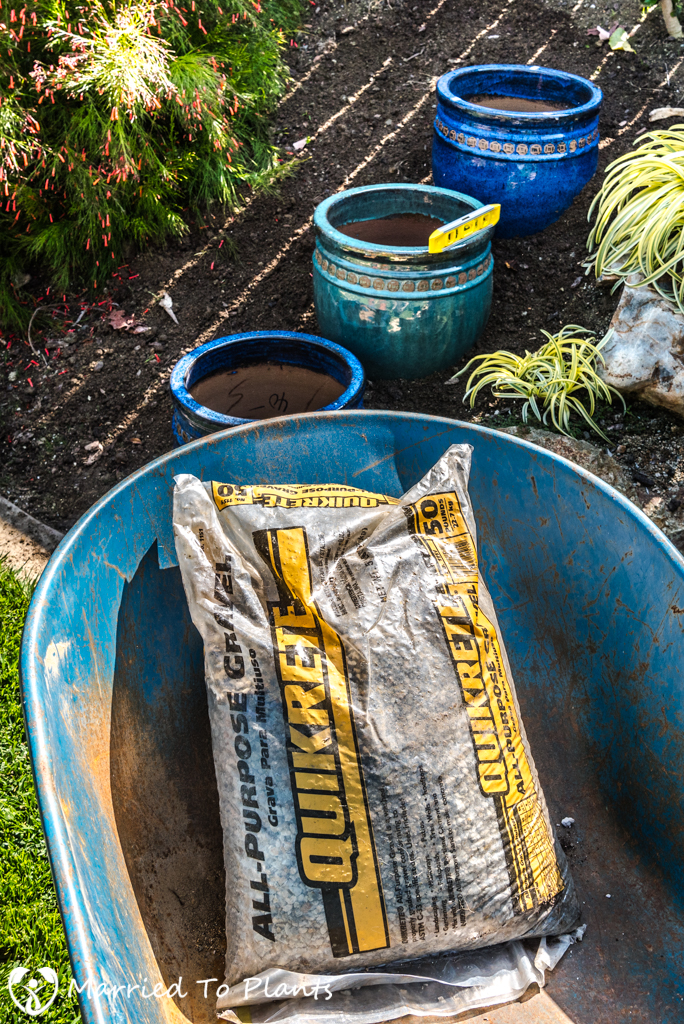 First two plants in. I was already thrilled with my idea here. 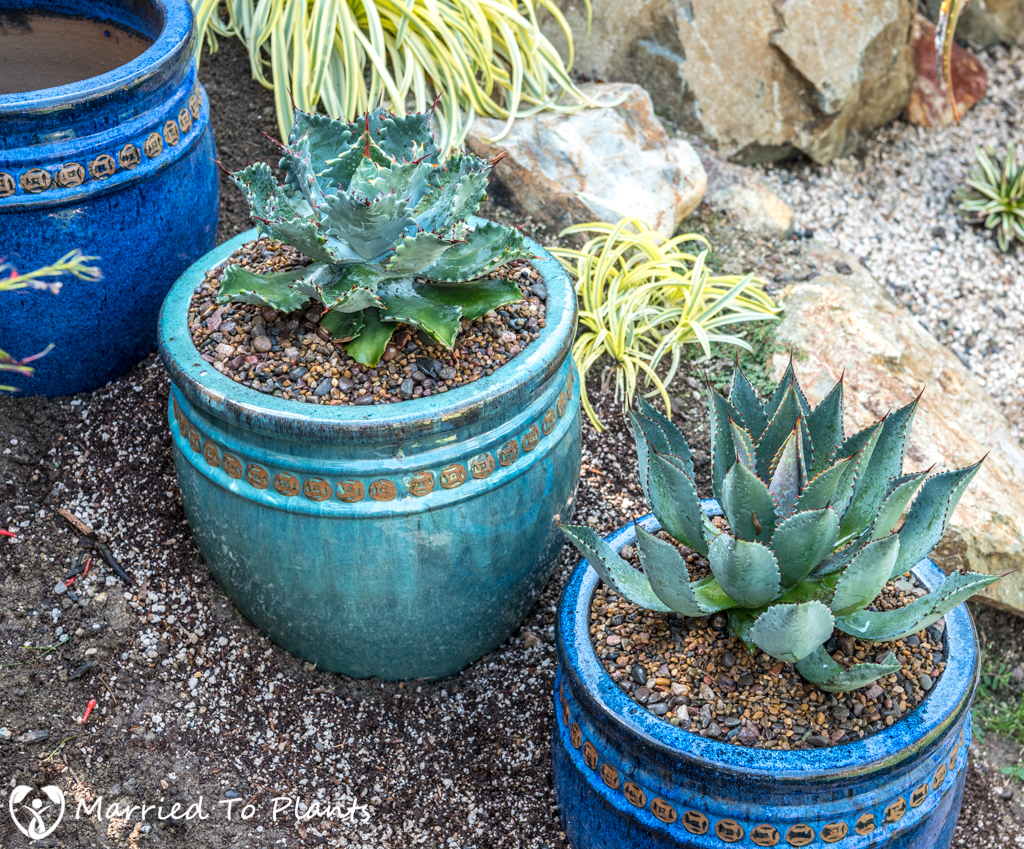 For the top dressing I just used some cheap pea pebbles and small parchment pebble to fill in the gaps. Because most agaves in pots will eventually grow to hide their top dressing, there really is no need to buy a more expensive or fancy rock. 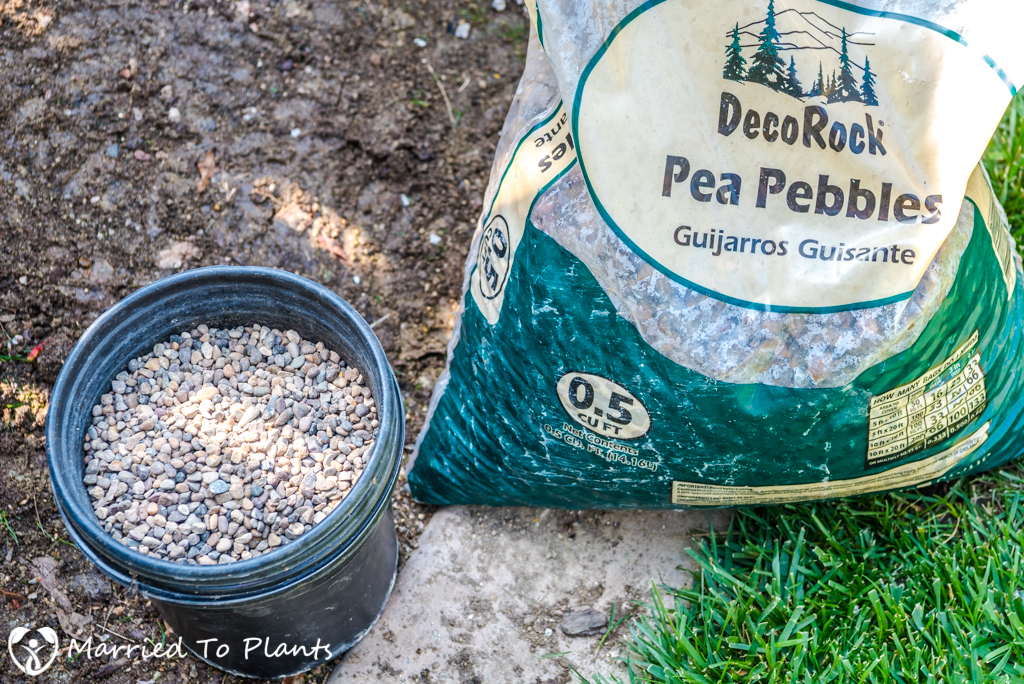 Once all three plants were in their new homes, you could really see what a difference these agave in pots made in the landscape. It appears to me that agaves evolved to exist in pots. Had I just planted them directly into the ground in the same location, the plants would have blended in too much and perhaps been lost with all my other plantings. These good-looking agaves needed to be elevated and showcased. In these pots, you can’t miss them when walking this part of the garden. 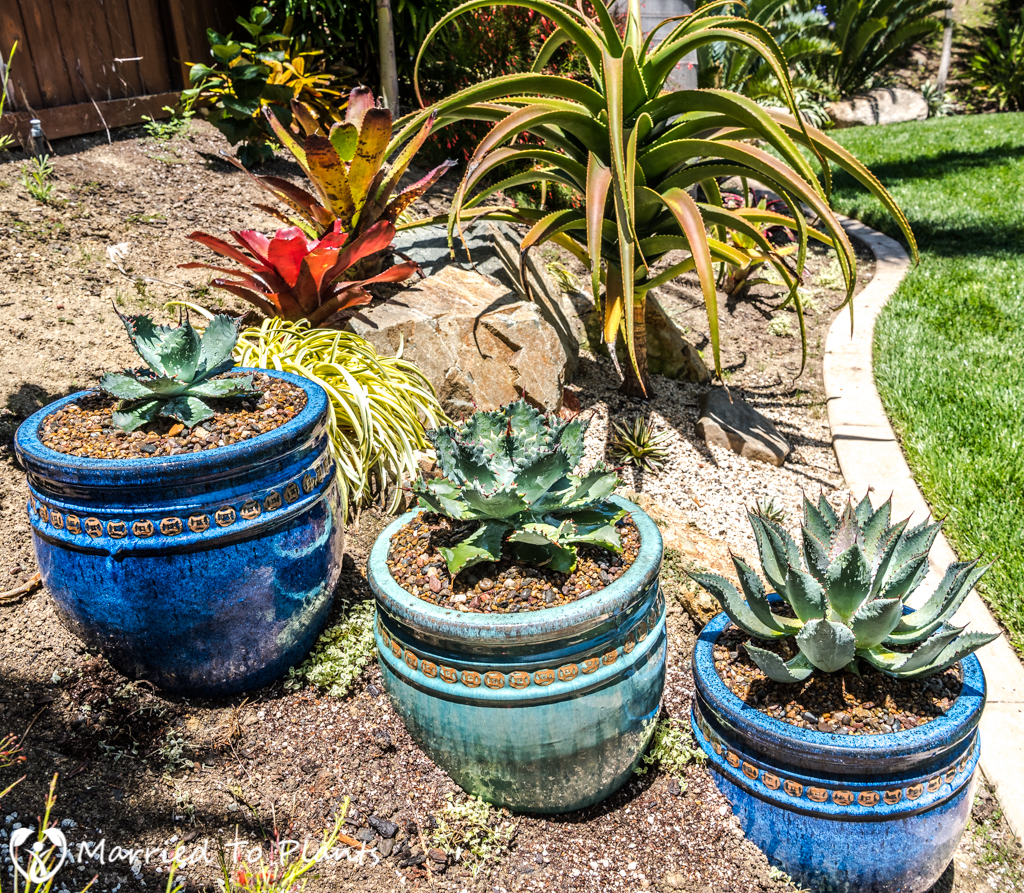 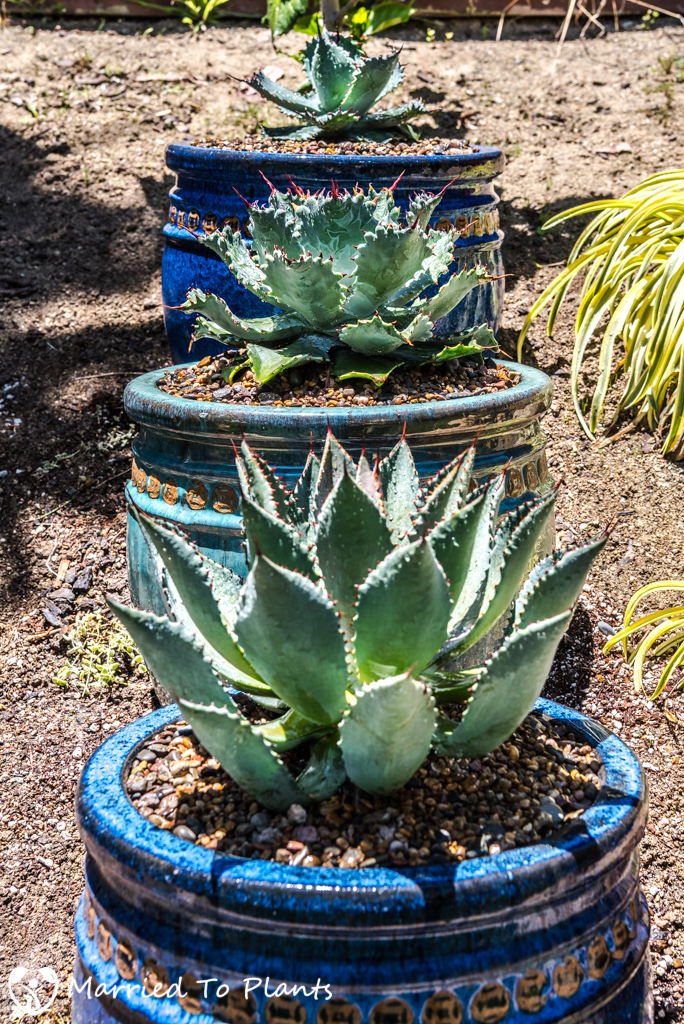 So what were the three agaves that went into the pots? The first one is an Agave isthmensis x Mangave ‘Bloodspot’ hybrid. 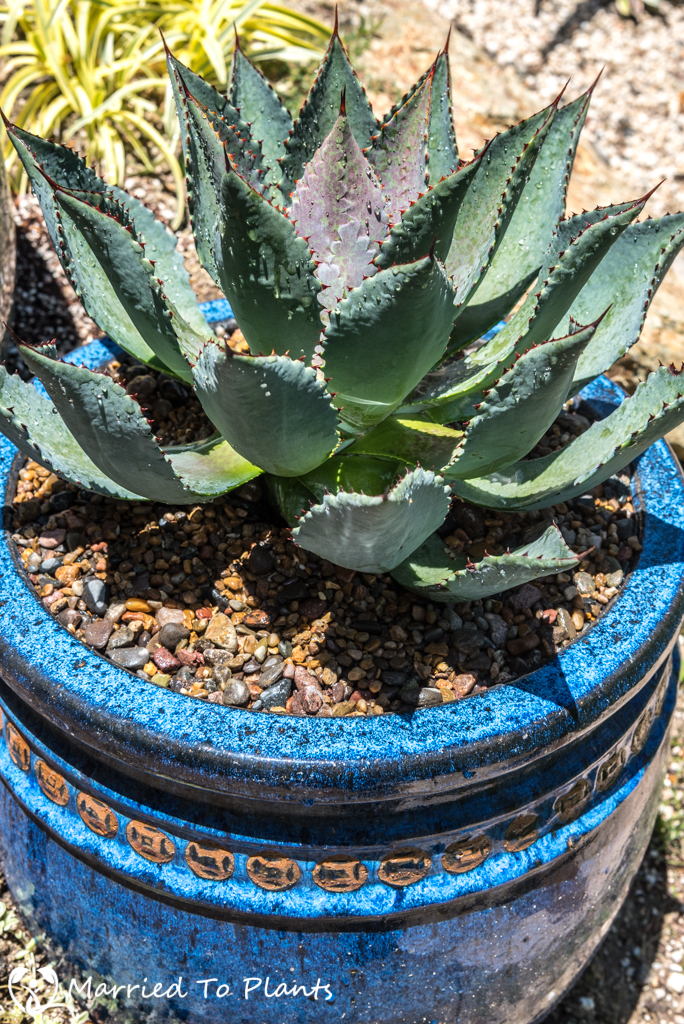 The second pot, the greener of the three, gets a beautiful Agave isthmensis x Agave potatorum. Just look at those mammillate margins. 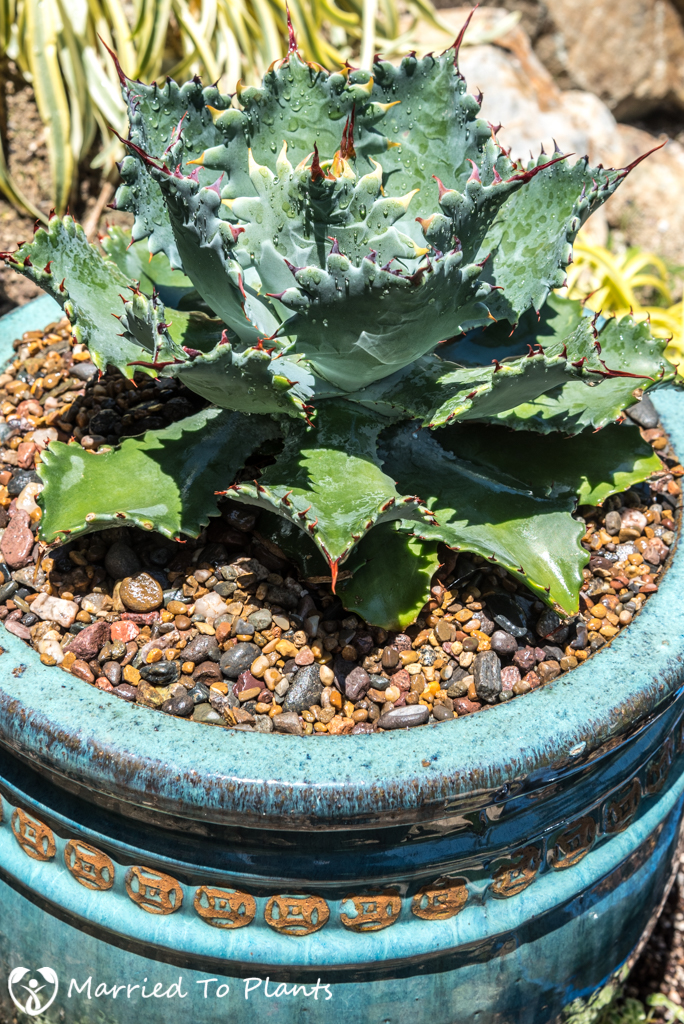 The third pot had to wait a little longer for its plant while I worked on tracking down an agave for it. I wanted to keep my Agave isthmensis hybrid theme going, so finding another hybrid took some effort. I was eventually lucky enough to purchase this Agave isthmensis x Agave parrasana. All three Agave isthmensis crosses were done by a friend of mine who works at Rancho Soledad Nursery: Jeremy Spathe. 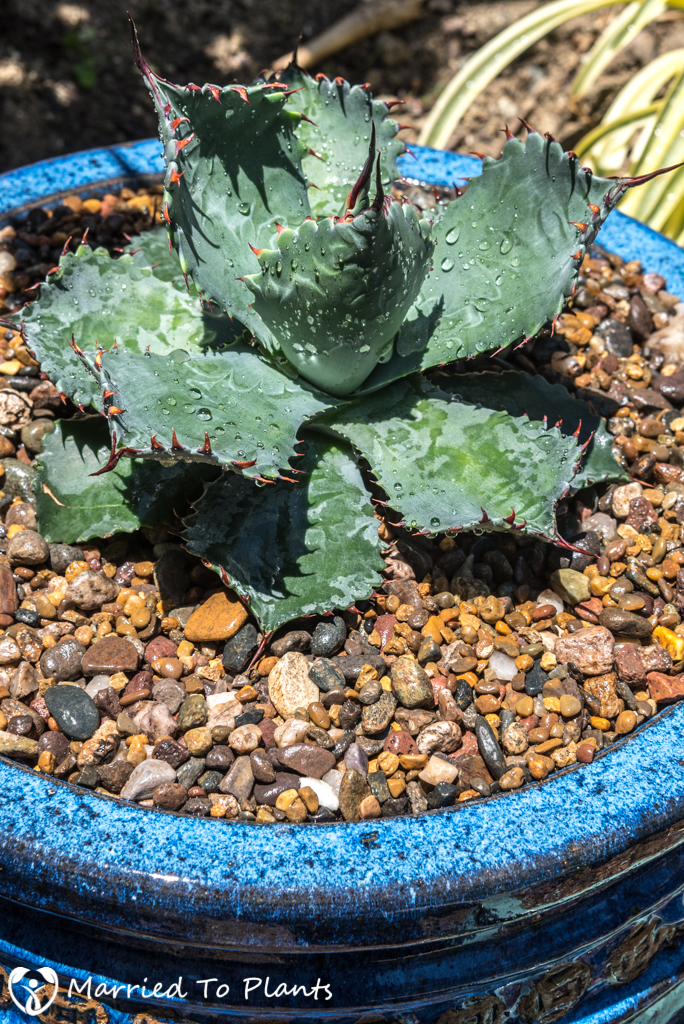 The second location where I wanted to add a few agaves was in a high exposure area of my garden and in a location which was really bland. Shown in the photo below, it is the area to the right of the pathway. The area to the left of the pathway was the subject of another garden project post a few years ago. One of the main reasons I needed to fix this area up was that my old and beautiful Coccothrinax crinita (Old Man Palm) was not being highlighted as it should. 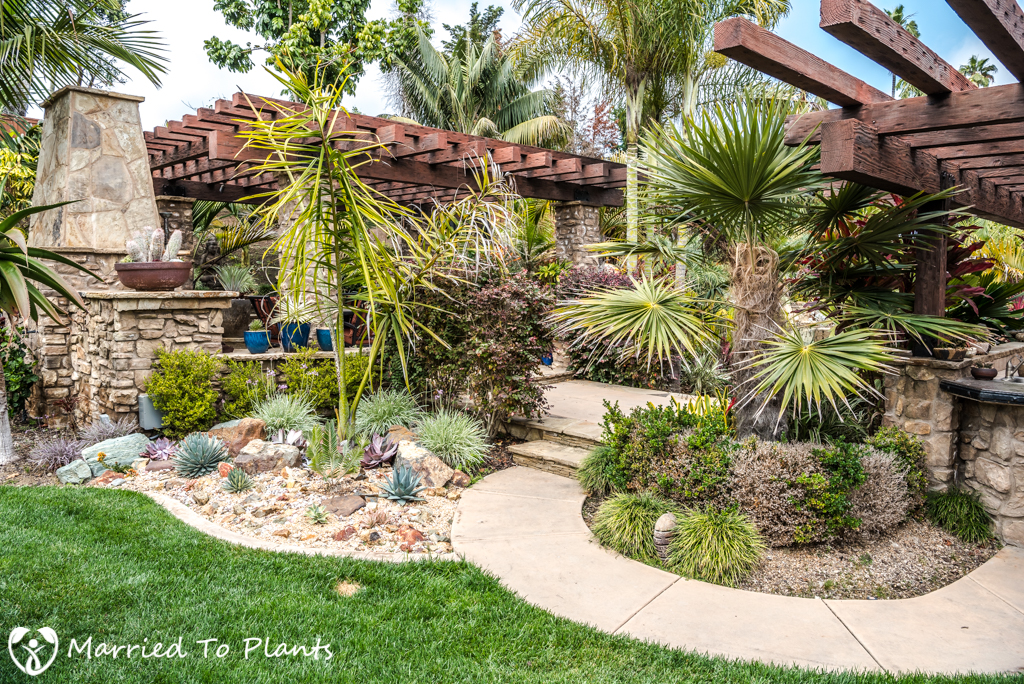 With the dying hedges now gone, the Coccothrinax crinita already stood out more.

Believe it or not, finding a red-glazed low bowl was not easy. I had to drive to three different places around San Diego County before I was able to buy just what I was looking for. These are the only two red-colored pots in my entire yard. 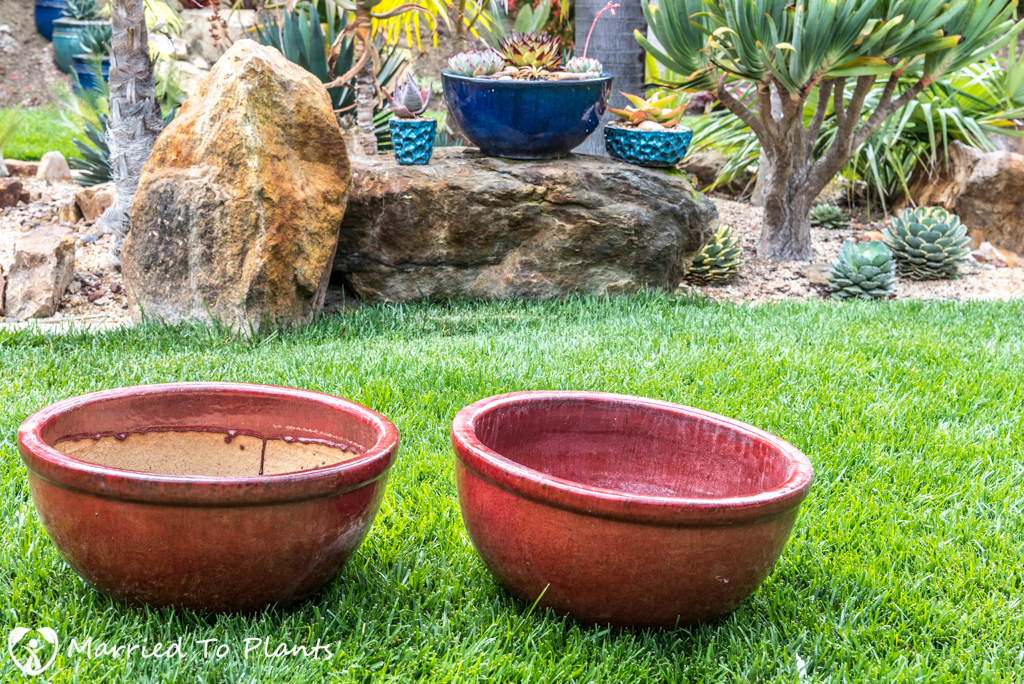 Following the same techniques for the three other pots I discussed earlier in this post, here are the agaves in pots after being leveled, planted and top-dressed.

Agave parrasana ‘Fireball.’ This plant was dug up from my front yard where it never got noticed. 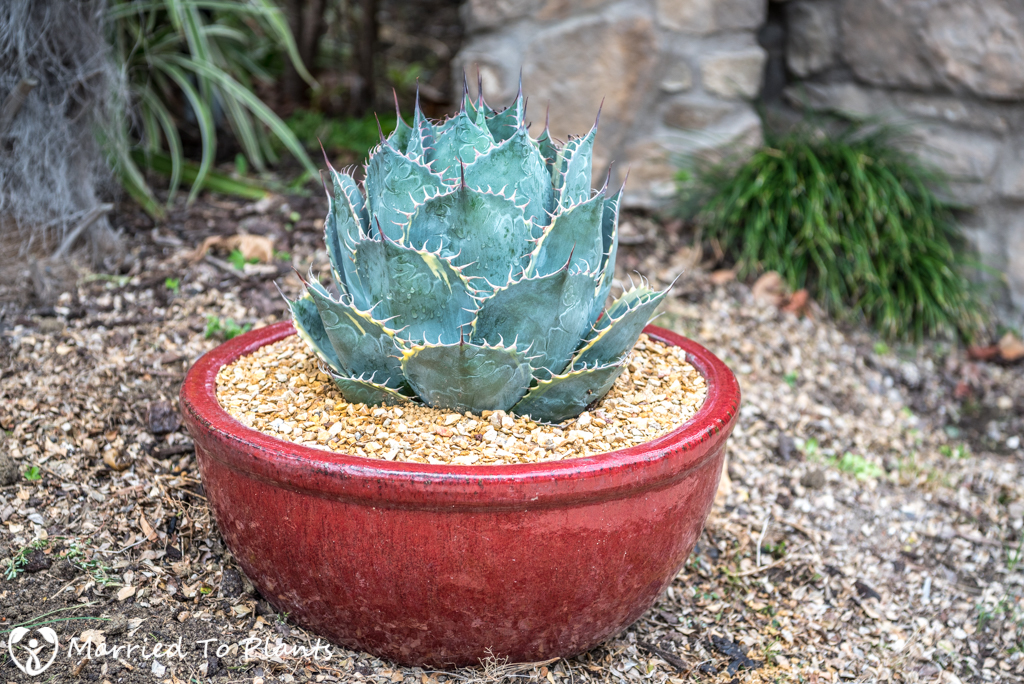 Agave x pumila. If you look in the rock garden five photos above this one, you will see this Agave x pumila in the ground. It was growing surprisingly quick (Agave x pumila is not known to be a fast grower) and would soon be dangerously close to pathway traffic. So I decided to dig it and put it in this pot to help slow it down. Plus it is the perfect size to bookend the Agave parrasana ‘Fireball.’ 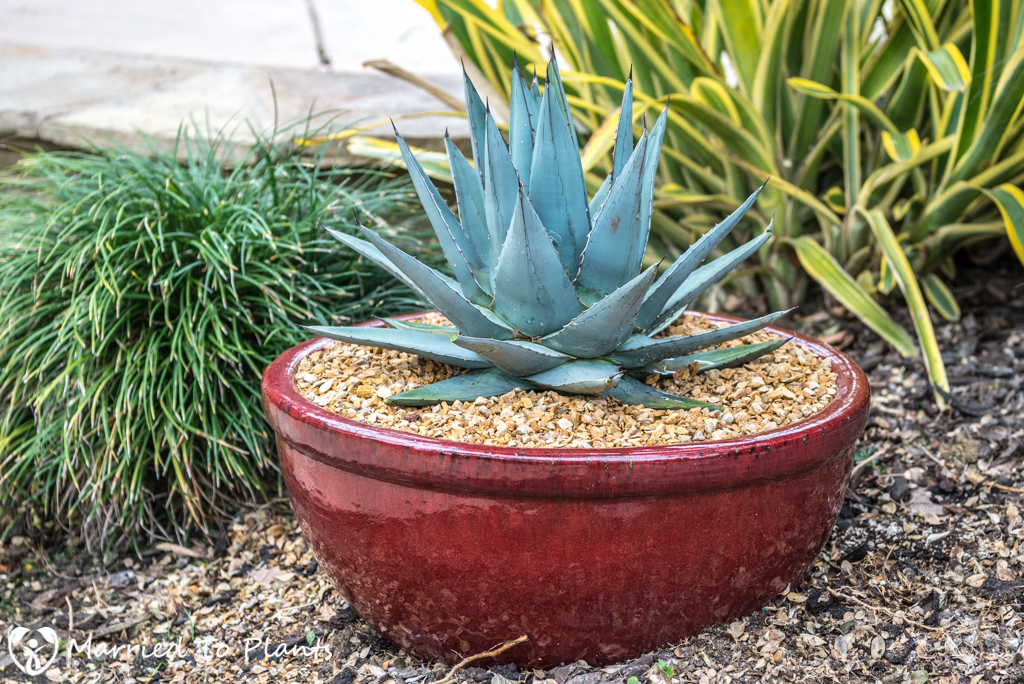 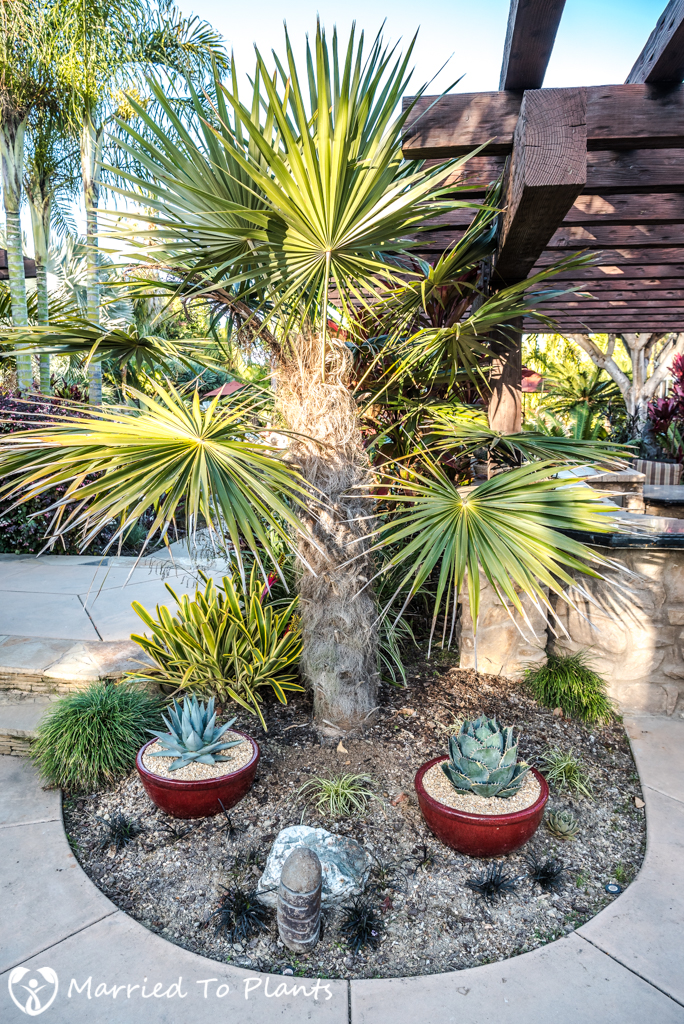 Once the Ophiopogon planiscapus ‘Nigrescens’ fills in and the Carex oshimensis ‘Evergold’ gets bigger, it will look much nicer. I am still waiting to pick up my two Echeveria lauii hybrids from a friend so I can plant them in front of the pots in those bare spaces between the Ophiopogon planiscapus ‘Nigrescens.’ After this, I will mulch to finish this area up. It should look pretty dang good, if I don’t say so myself. I will update this blog post on these agaves in pots come fall to see how it all turned out once things fill out.