Tecoma stans has been cultivated as an ornamental since as far back as the mid-1800s. Cultivars and hybrids soon followed. So it goes without saying that the Yellow Bells is a very popular large shrub in Southern Californian gardens.  And to prove I am no plant snob, I actually grow one in my yard. The two most commonly encountered varieties are the more tropical Tecoma stans var stans, and the hardier Tecoma stans var. angustata from West Texas. I much prefer the more tropical-looking foliage and the larger overall growth of Tecoma stans var stans. It is this variety that I grow and am currently training as a small tree. No easy feat, as anyone who grows Yellow Bells will tell you.

Tecoma stans is in the trumpet creeper family (Bignoniaceae). It is easily one of my favorite families of flowering trees and the most commonly planted tree family in my landscape (as seen with Fernandoa magnifica and my Jacaranda jasminoides hybrid).  It is just hard to beat the bright yellow, trumpet-shaped blooms it shows off aplenty. I can forgive its unruliness and messy seed pods because it is not easy finding a flowering tropical tree that blooms almost year round. 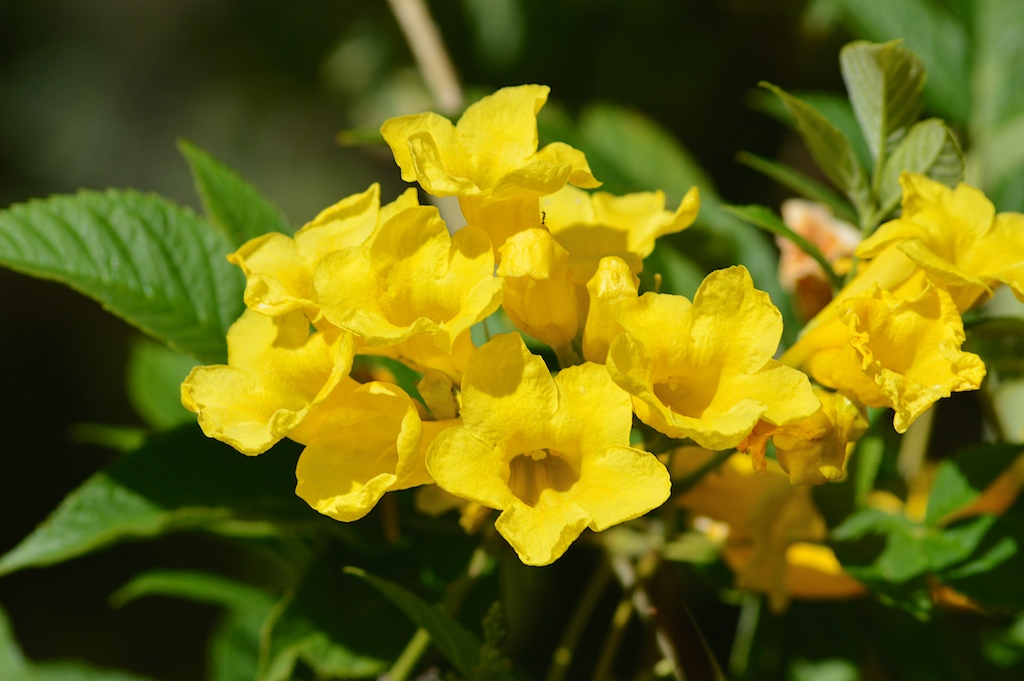 For the fellow Tecoma stans lovers living around San Diego, now is a good time to see a few different ones in full bloom. For me there is no better place than the San Diego Botanic Garden and that is where I headed last weekend. In keeping with the Tecoma stans var stans theme, here is a nice one at the botanical garden just outside the main entrance. The Garden lets most their plants grow naturally without much maintenance. So theirs is more of a large shrub whereas I am training mine to be a standard. The botanical garden calls this Tecoma stans ‘Golden Sunrise’. Hmm… 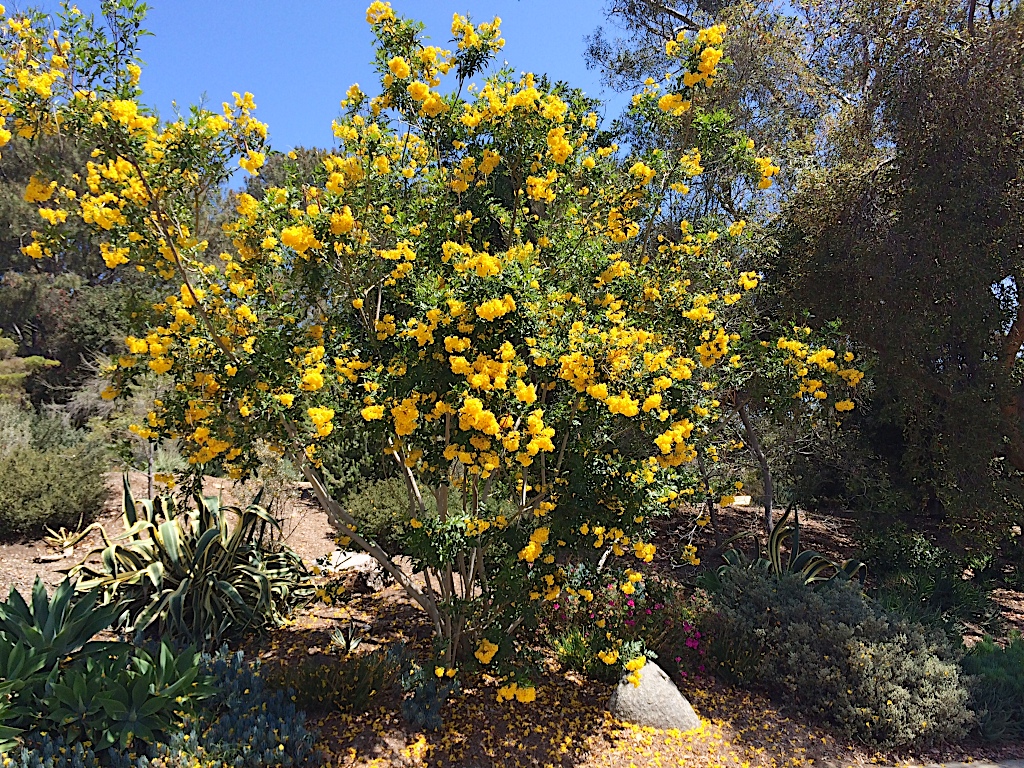 The following two photos are of Tecoma stans ‘Orange Jubilee’ (now called Tecoma alata). Tecoma alata has the same cultural requirements as Tecoma stans var stans and might even be more cold tolerant. The two biggest visual differences I notice are of course the orange flowers and the fact it seems to grow more upright. 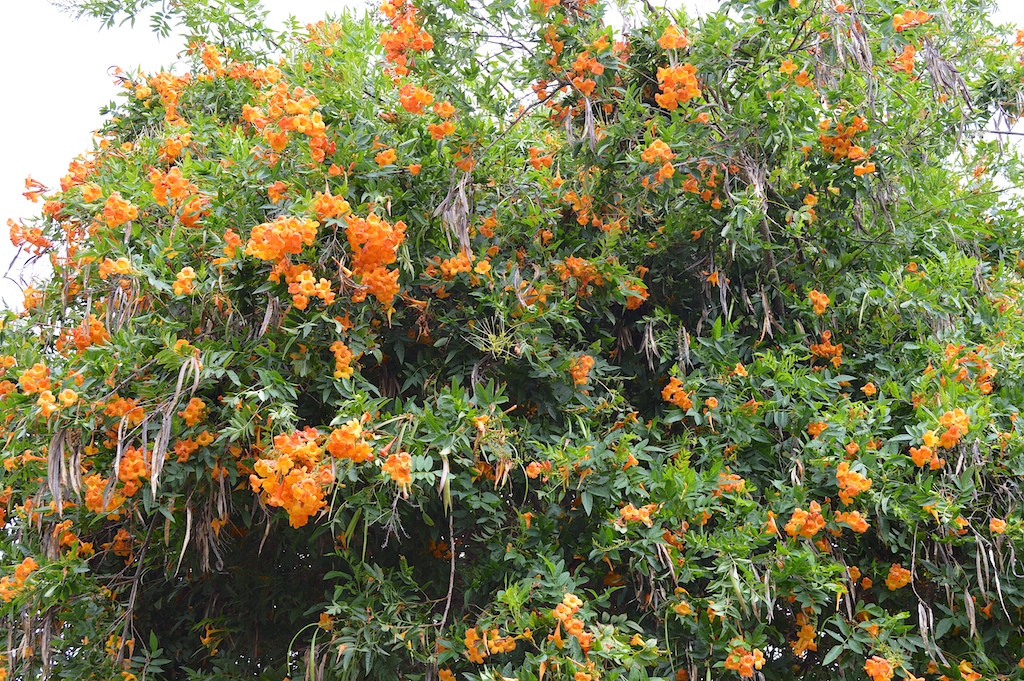 The next photos are of Tecoma x ‘Orange Jubilee’. My personal favorite. It is a cross between Tecoma stans and Tecoma alata, and the traits of both parents can be seen in the flower. I have seen quite a few of these crosses in other gardens but none came out as well as this one. The yellow flowers with the bright orange to red throat really stand out. Another interesting observation about this cross is that it doesn’t seem to hold as many seed pods, which is a huge plus in my book. The San Diego Botanic Garden has clearly marked the plant as Tecoma x ‘Orange Jubilee’; however I have a sneaking suspicion that it is incorrectly labeled and that the pictures below are really of a cultivar called Tecoma x ‘Sunrise’. 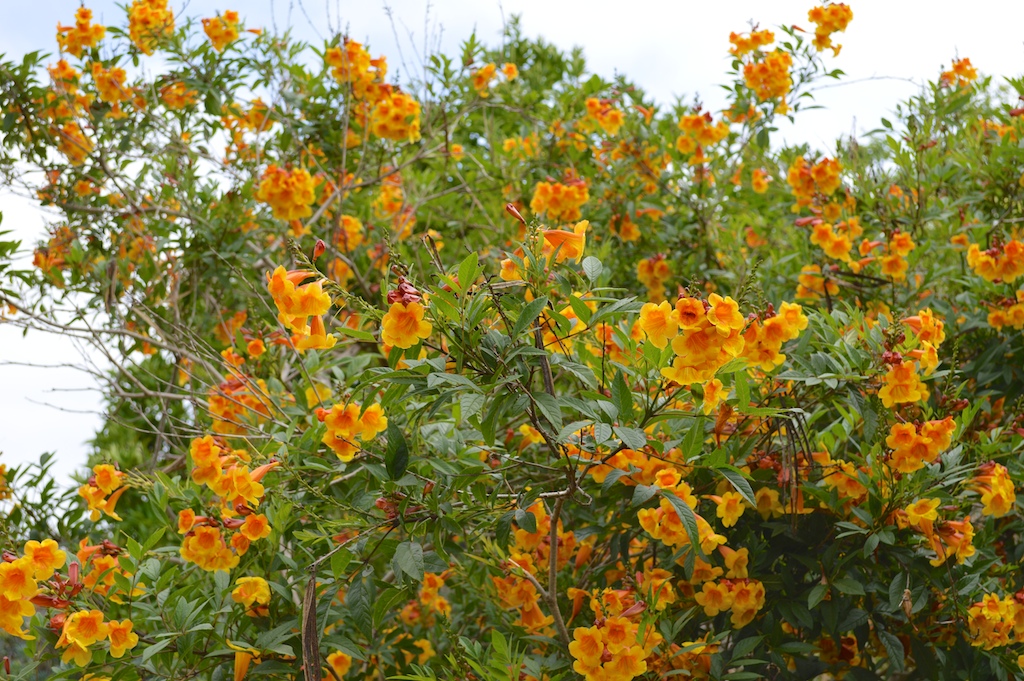 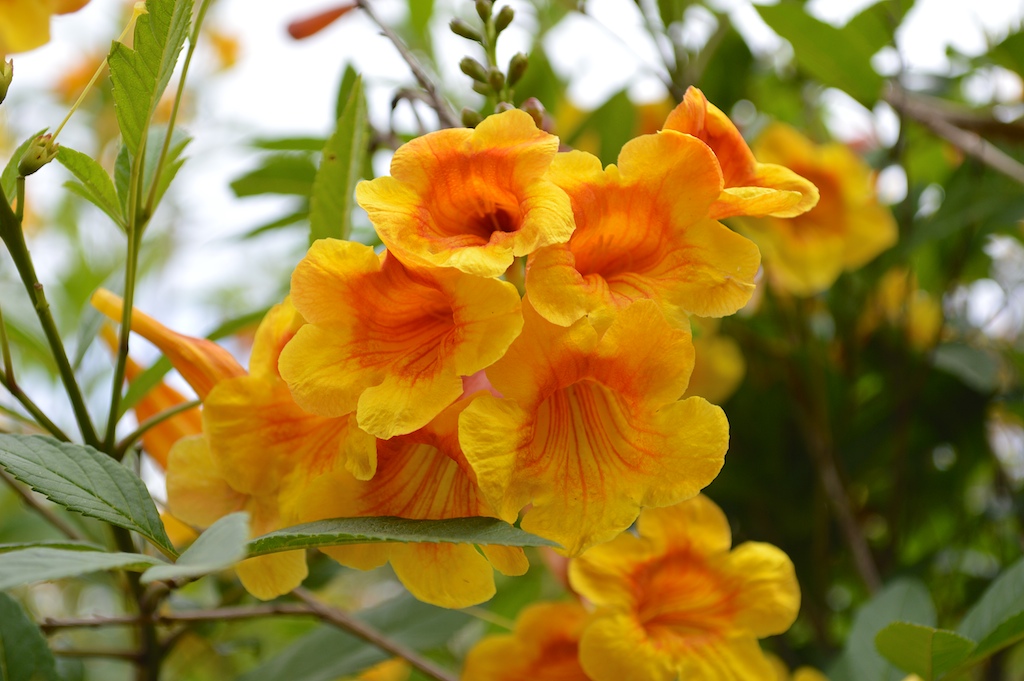 The last photo is of my Tecoma x ‘Crimson Flare’. This is a new planting in my yard which was purchased from a local nursery Briggs Tree Company.  I do not know much about this plant yet, but from what I can gather it has similar requirements to Tecoma stans var stans, though it seems to be more cold hardy. I have seen it rated down to 15º F, USDA Zone 8. I have noticed that when it gets into the high 90s F, the color fades to a bleached-out red or pinkish color. But once the temperatures drop back down to their normal range, the “crimson” red color comes right back. 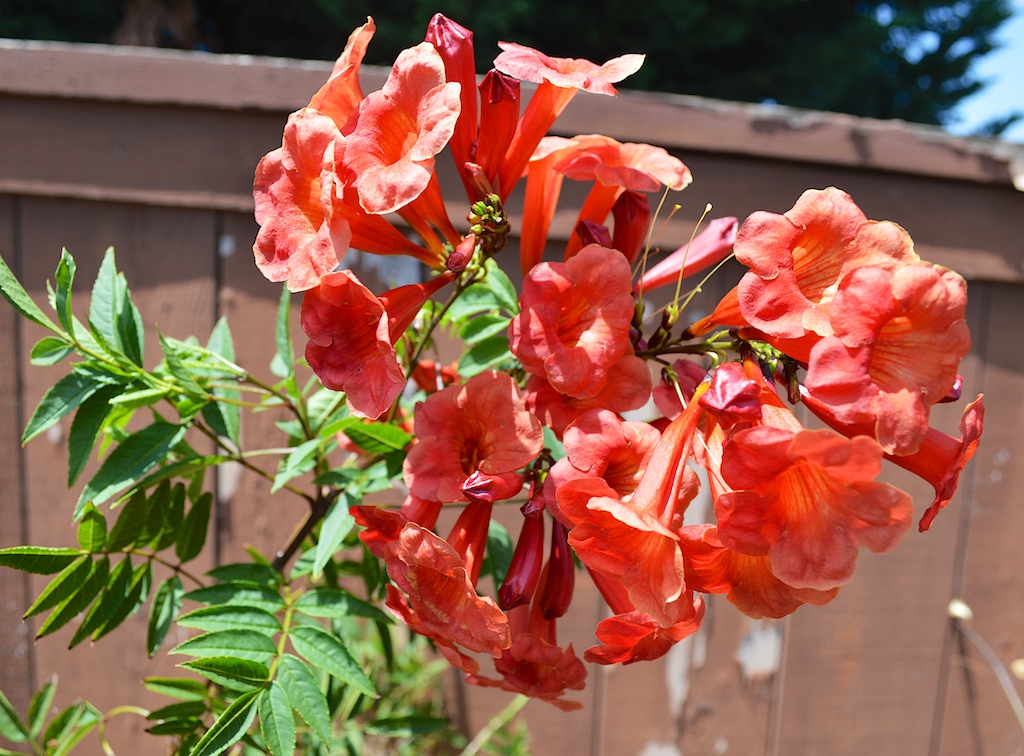 Tecoma stans and its close relatives have shown us through the years why they are so popular. They can handle extreme heat, they are drought tolerant once established, and they have no serious insect or disease problems. Other than the fact they can be unruly when small, they really are a low-maintenance plant for a Mediterranean climate landscape. Another perk is that the long bloom season of Tecoma makes for a consistent option for all the hummingbirds and bees that find the flowers unavoidable.