Growing up in Jackson Hole, Wyoming, you learn to appreciate many of nature’s cues that summer has finally arrived. Long, cold winters can be taxing, so when summer finally does arrive you tend to enjoy it a little more than we do here in San Diego. Heck, summer started in March in San Diego this year. Yes, we are spoiled.

One of those signs from nature was when dragonflies started appearing in the skies over the many ponds and lakes around Jackson. It was during those Wyoming summers that my interest towards dragonflies grew. Who cannot admire the bald eagle of the insect world? An insect that once flew with the dinosaurs. An insect with the greatest vision of any other in the world. An insect that can fly in six directions (upward, downward, forward, back, and side to side). This voracious eater is always entertaining to watch and it was only in early summer that they would appear in Jackson.

Here in Southern California we have fewer year-round bodies of water for dragonflies to grow. So you just do not see them as often as you would in wetter areas of the world. Six years ago, when I had my koi pond built, that decision lead to an increase in dragonfly sightings in my yard. The first three years I didn’t see any past the really strong-flying Darners that cover vast distances and never seem to land. As it turns out, this is most likely due to the fact dragonflies live most their lives under water as nymphs. They can live in this stage for 3-5 years. The fourth year of having my koi pond began the yearly cycle of having the more territorial Skimmers present. This family of dragonflies features males that claim territory by perching at water sources and patrolling the skies above my koi pond. It is these dragonflies that have became an integral part of the garden and not just another insect that was simply passing through. They add to the many layers that make my garden so enjoyable to me.

This year I have had two different dragonflies from the Skimmer Family make their home at my koi pond. Neon Skimmers (Libellula croceipennis) and Blue Dashers (Pachydiplax longipennis). Here is a Neon Skimmer emerging from its nymph stage. Who knows exactly how many years he lay hidden in my koi pond before getting to this stage. 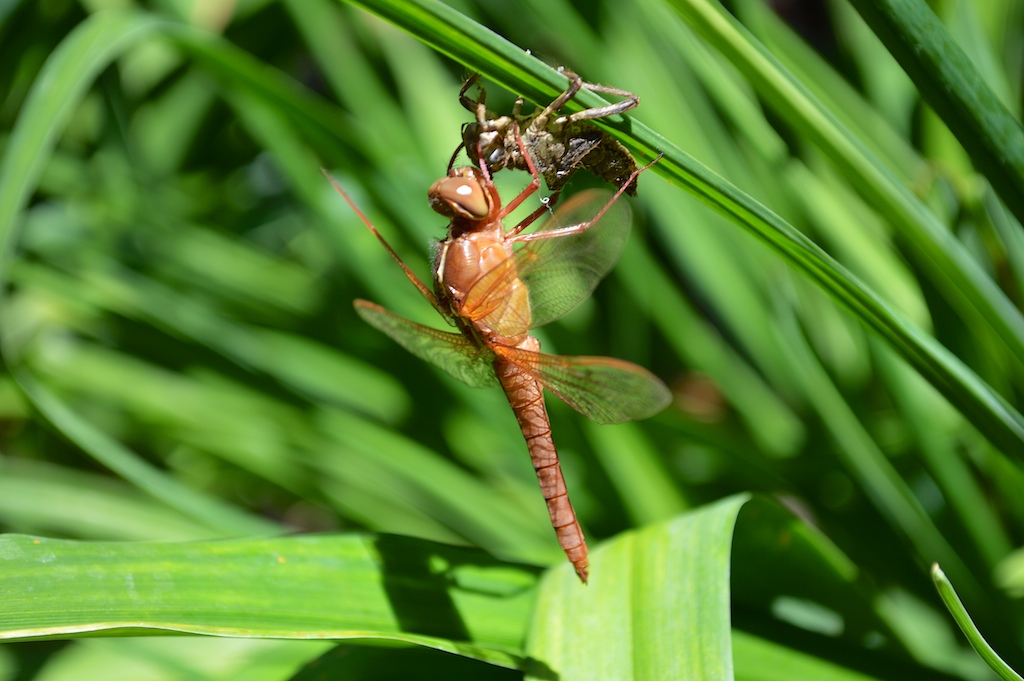 Neon Skimmer males are very brightly colored, as you can see below. This guy spends all day launching off his perch to eat bugs, chasing off rival males or flying after females to mate. What a life. 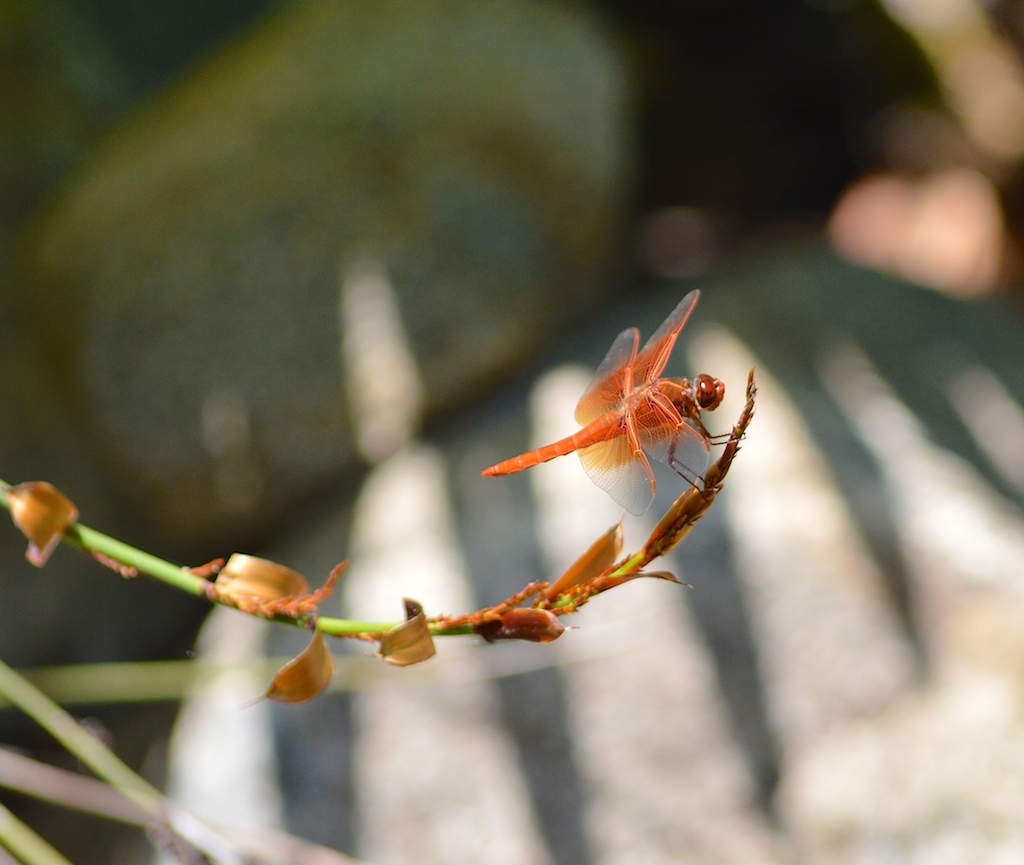 Neon Skimmers look very similar to another dragonfly found here in Southern California—the Flame Skimmer (Libellula saturata). The easiest way to distinguish the two is by the amount of color in the wings. The Neon Skimmer has a lot less, as can be seen in these comparison photos. You can see below that my dragonfly is indeed a Neon Skimmer. 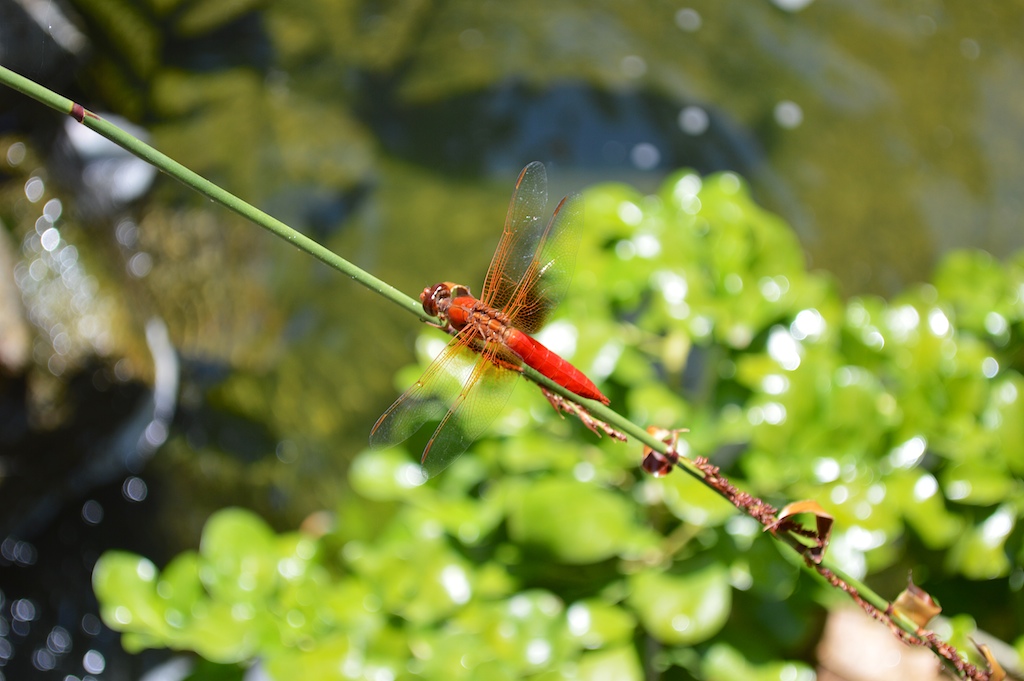 The Blue Dasher is a little smaller than the Neon Skimmer but has similar habits. They both love to perch on my Equisetum (horsetails). 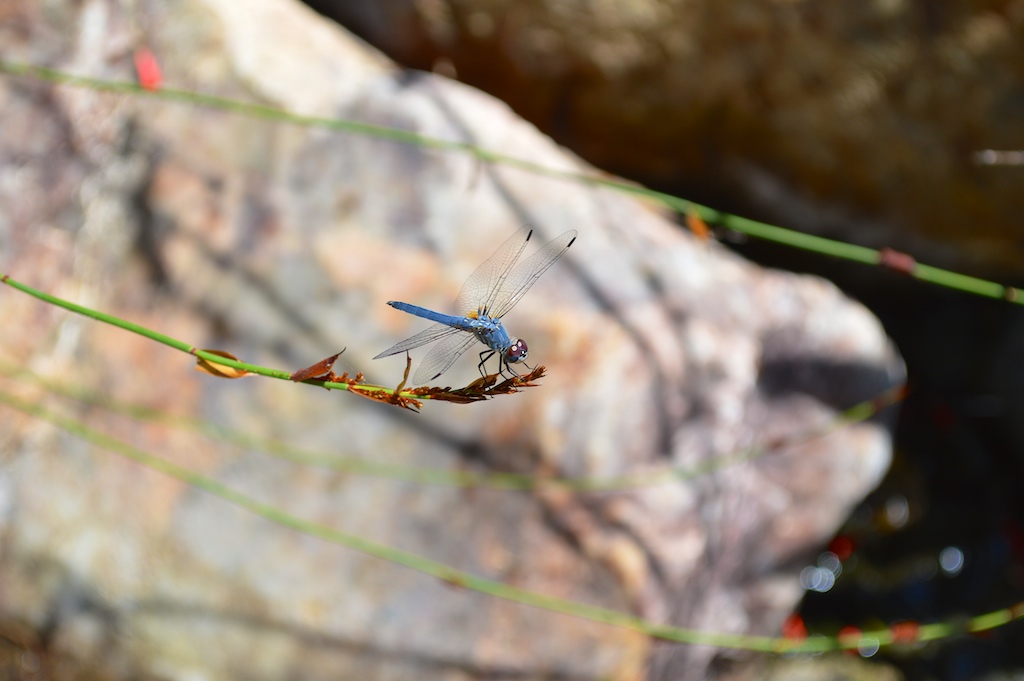 Blue Dashers look very similar to the Western Pondhawk (Erythemis simplicollis collocata).  The easiest way to distinguish the two is that the Blue Dasher has a white face, as seen below. 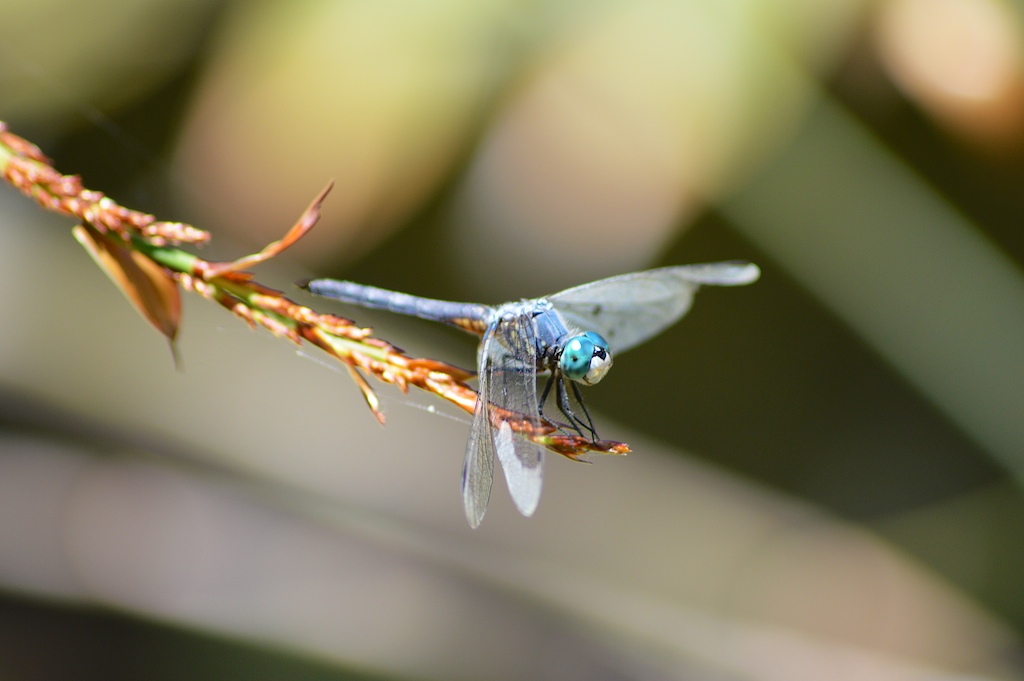 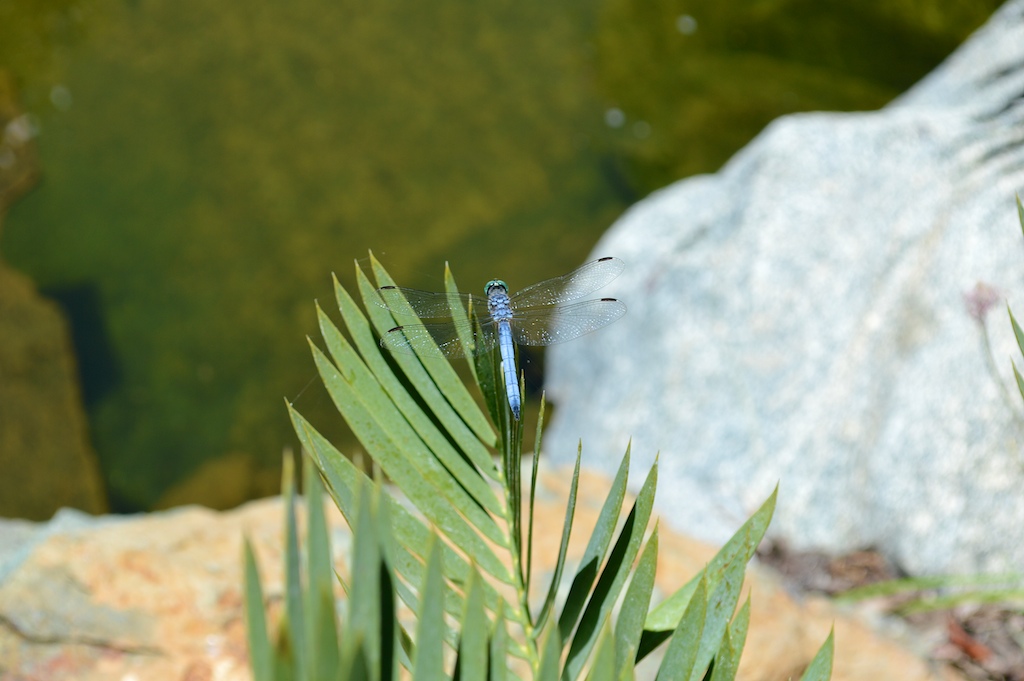 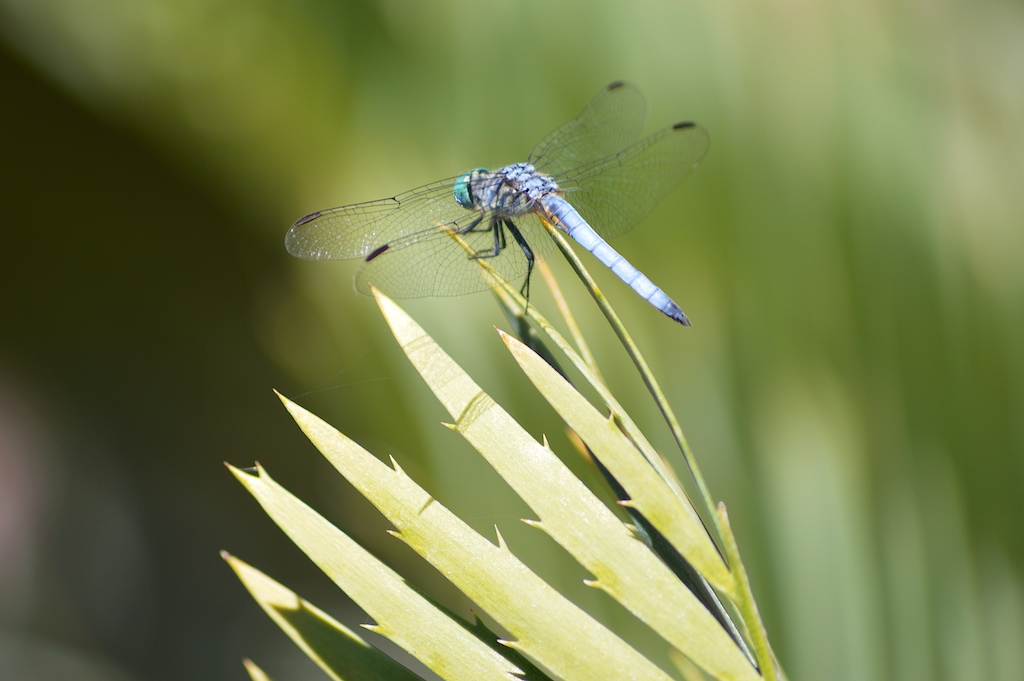 For a few months now these two guys have shared the koi pond looking for rival males and suitable females. 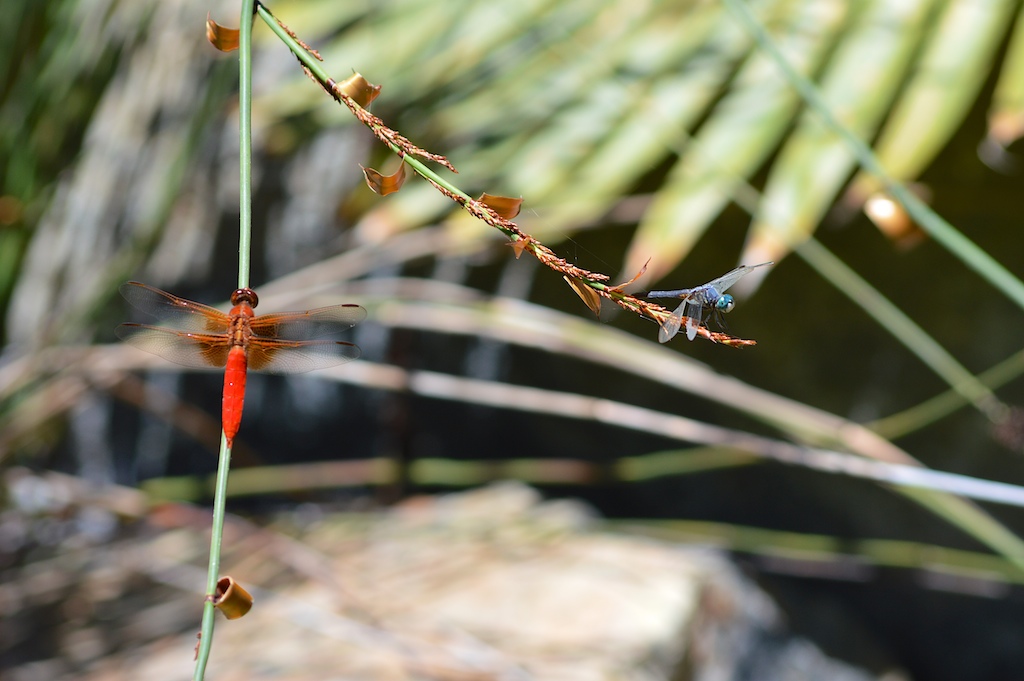 These two dragonflies patrolling the skies above my koi pond are not alone. I also have a bunch of damselflies (a close relative of the dragonfly). Damselflies can be distinguished from a dragonfly by the way they hold their wings. Dragonflies hold their wings out open to the side while damselflies’ wings are held closed, usually over the abdomen. I find it much more difficult to ID damselflies. I believe I have the Aztec Dancer (Argia nahuana) in my garden. 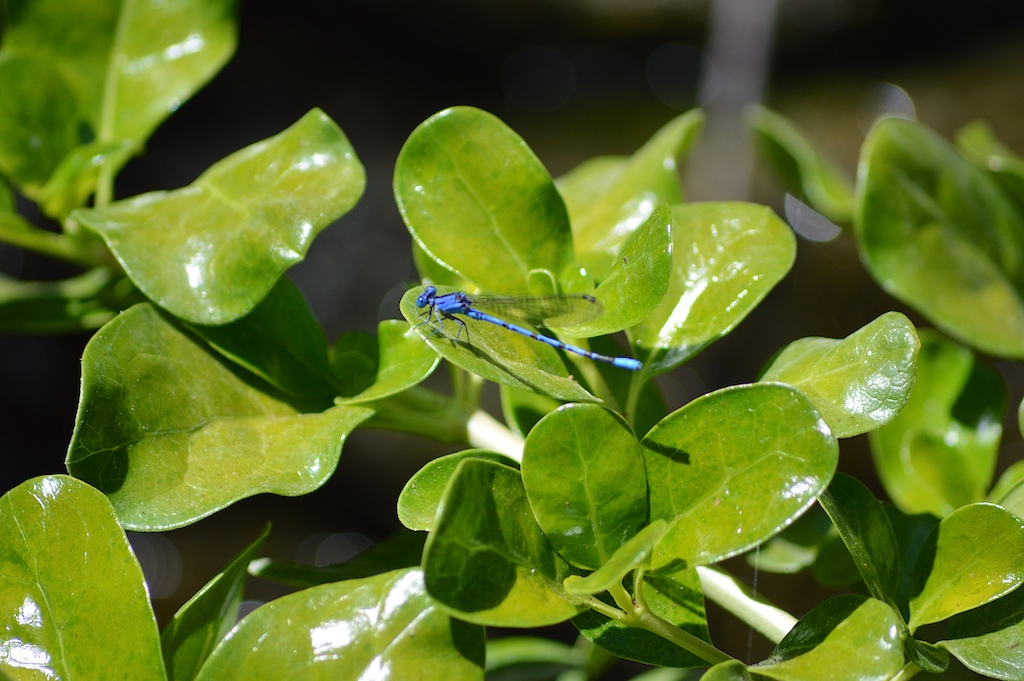 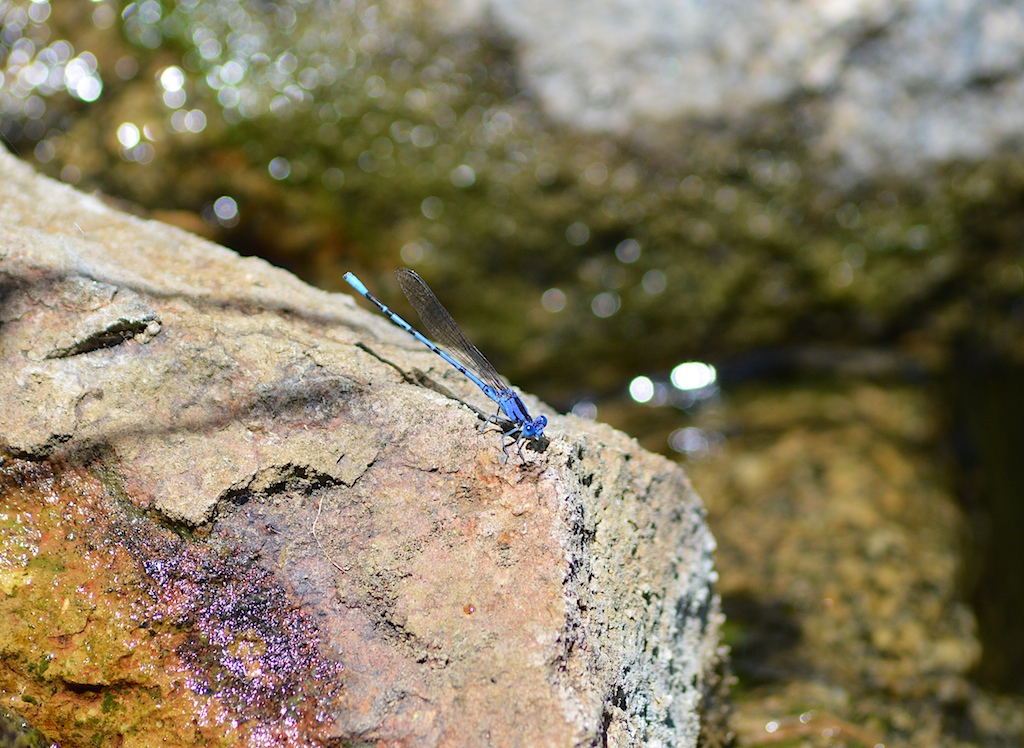 Even though all my photos of damselflies are around my koi pond, they can be found throughout my garden hunting for food and mating. 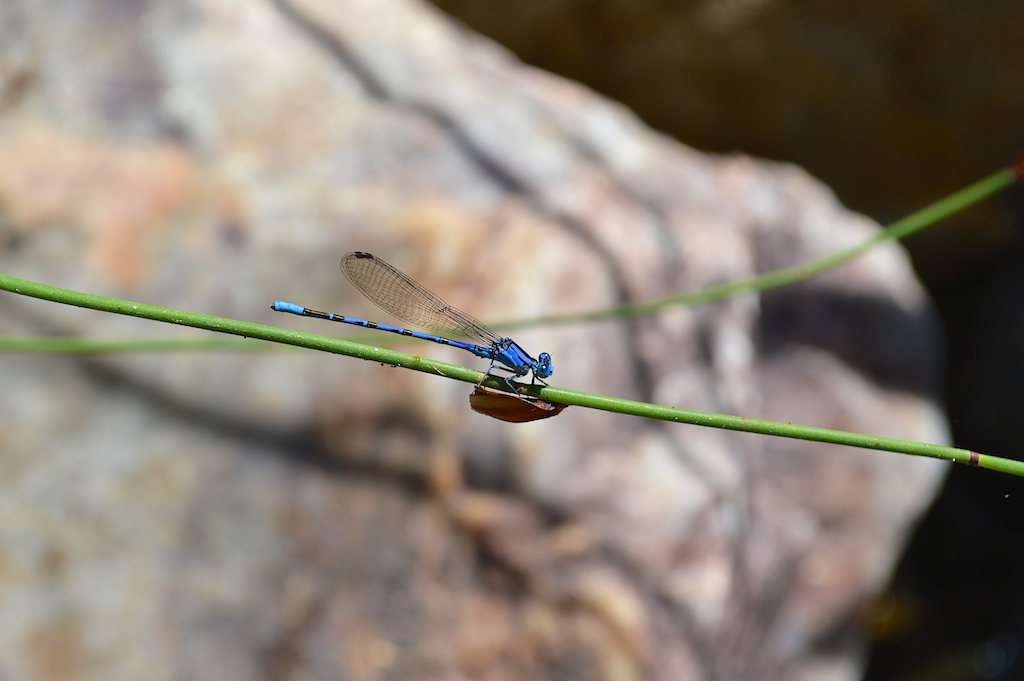 It has been written that dragonflies are an indicator species for environmental health of an ecosystem. I believe that the abundance of dragonflies and damselflies found in my garden is an indicator that I am doing things right. With any luck, next year I will have a new species or two make my garden their home.