Spring time in my garden is when I like to make the major changes. Spring is also when I find myself planting 90% of everything I will put into the ground that year. However, before any plantings, time must be dedicated to ripping plants out. We all know that life isn’t fair, and tough choices have to made when building your dream garden. Some plants were just temporary space fillers until other slower growing plants reached a presentable size. Some plants simply grew to fast and hog way too much space for the value they give in return. Still others happened to grow into something you never really expected or desired. So these plants must go. I have gotten so good at being decisive that I no longer lose sleep over “killing” a plant when its time is up. This week marks that time of year when mass murder in the garden takes place.

All this really bugs my mother. Anytime she asks what else I am working on in the garden, if my answer involves removing a plant for the compost pile she gets all upset. “Why would you do that to that poor little plant? Why don’t you just move it or save it? I don’t like killing plants.”  Well, I don’t either, and frankly, enough die by accident for me to not want to add those that I kill on purpose to my tally. My mom’s solution is to dig out the plant she doesn’t want in a certain spot and then move it elsewhere in her garden. Basically she becomes a hoarder because she can’t bring herself to throw any plant into the compost pile or green waste trashcan. I love my Mom, but I am sure glad I don’t have any reservations about playing the Grim Reaper.

Let’s get to the crime scene. First up is an Arenga engleri. The issue with Arenga engleri is that it is a slow-growing palm and once you finally grow a nice looking clump, it flowers and dies. Arenga engleri is monocarpic, so the old branches have to be cut out, as they die soon after. For whatever reason, here in Southern California this palm loves to flower quickly and never grows into the large, clumping mass you find in habitat. Here you can see a trunk in flower. It is actually one of three stems that were in flower at the time. 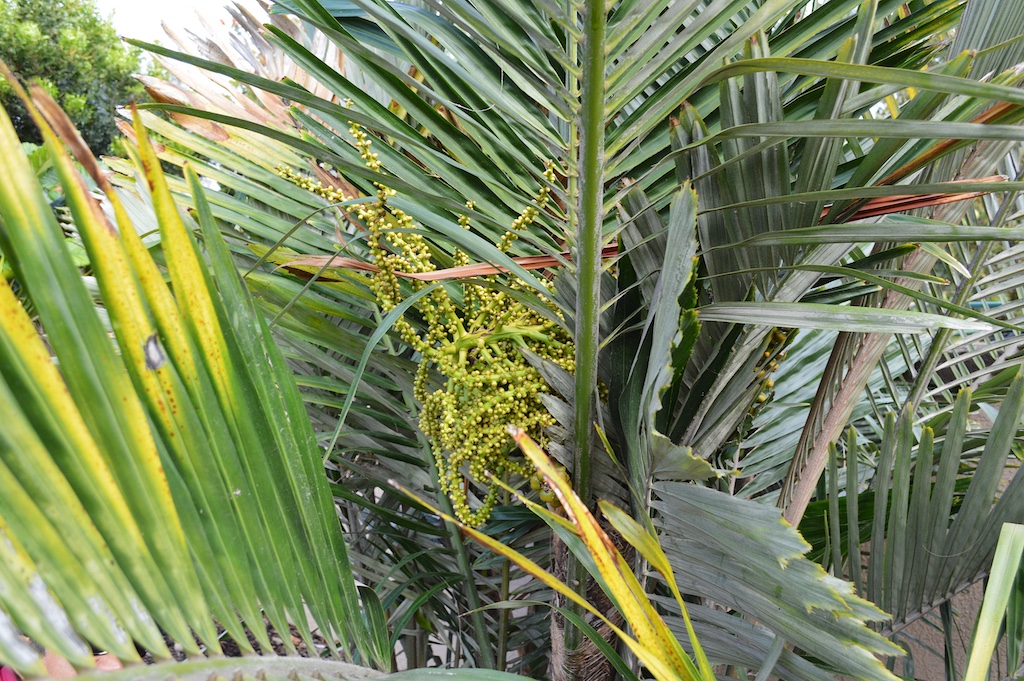 Plus, if I were to be perfectly honest, it really isn’t a palm I enjoy looking at. So out it goes to make room for a Coconut Queen (Syagrus schizophylla x Syagrus romanzoffiana). 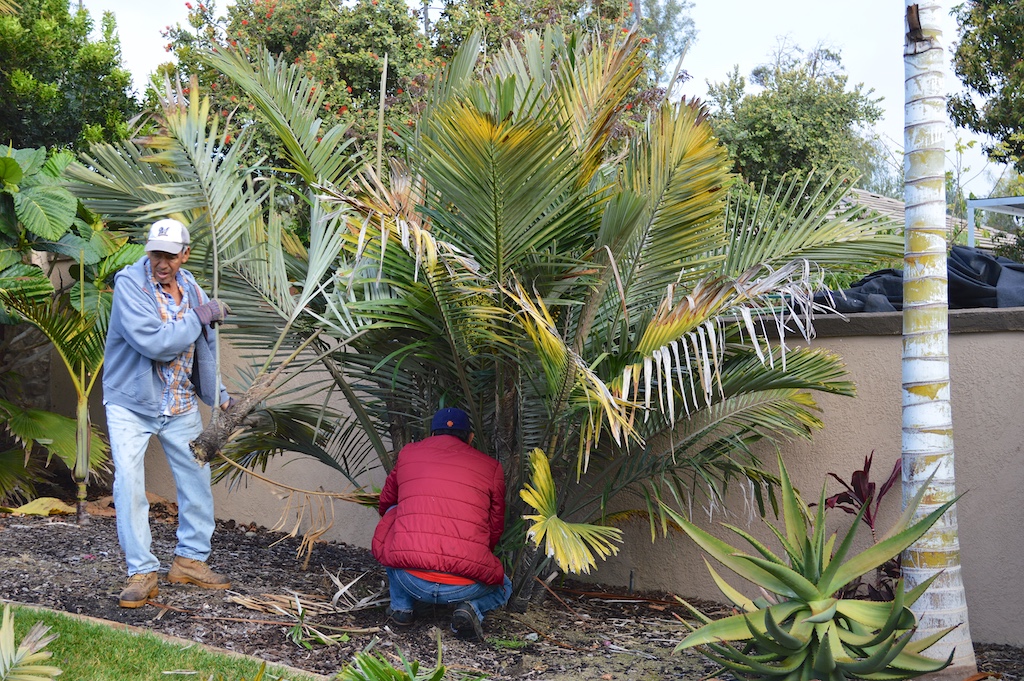 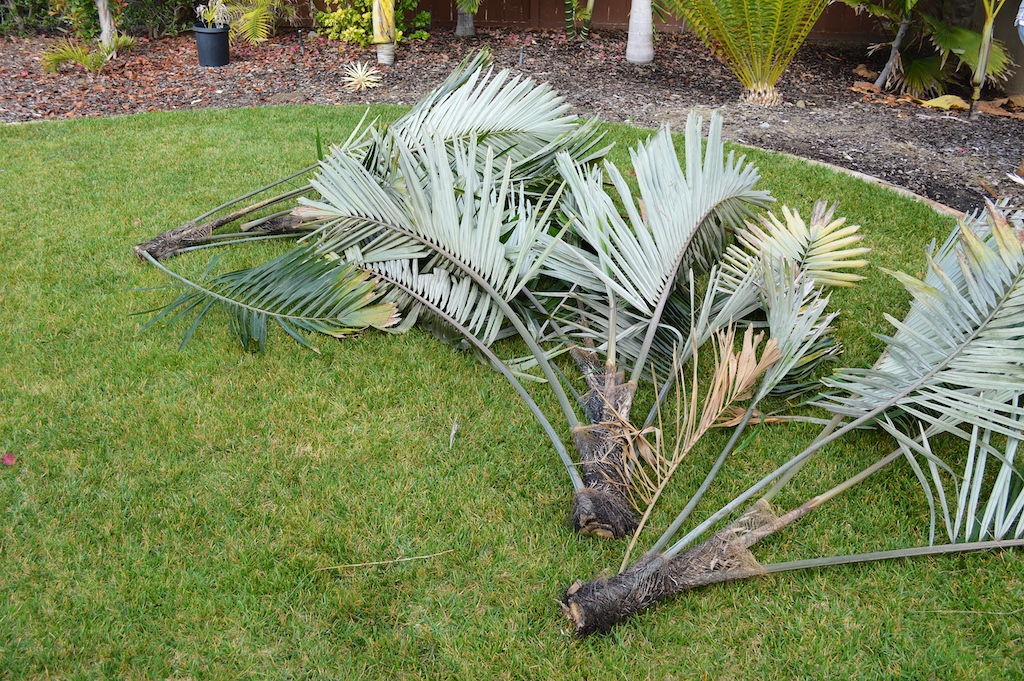 A large group of stumps like those found above would take forever to break down in our climate. I don’t have the patience to wait it out, so I always have my guys rent a stump grinder to clean out the majority of the stumps and roots . This makes life a lot easier when I need to plant something in the same spot in the future. 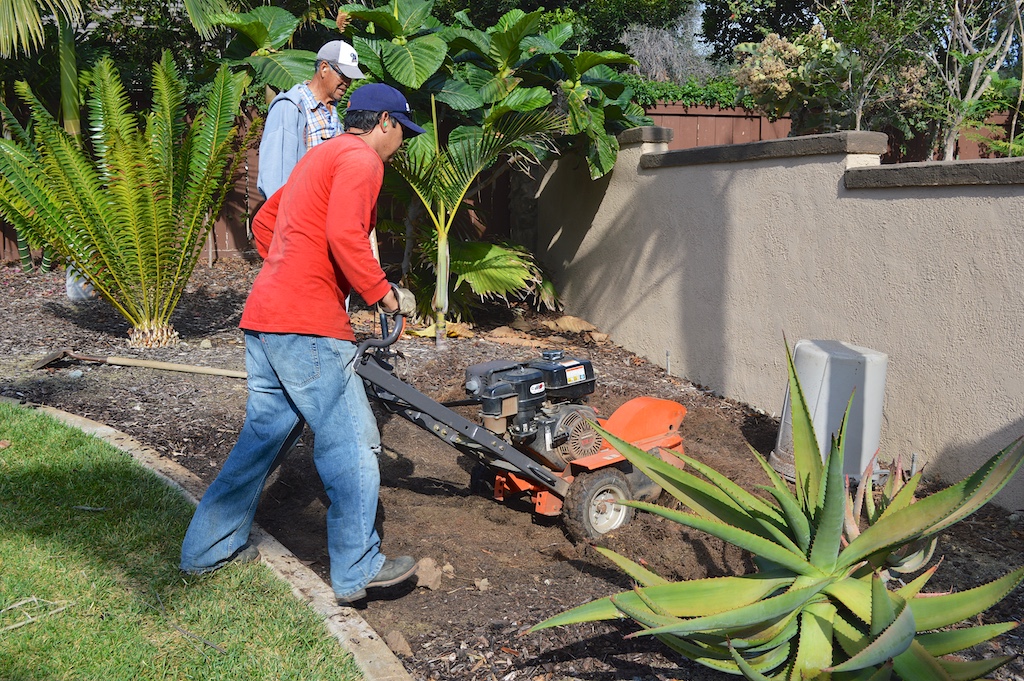 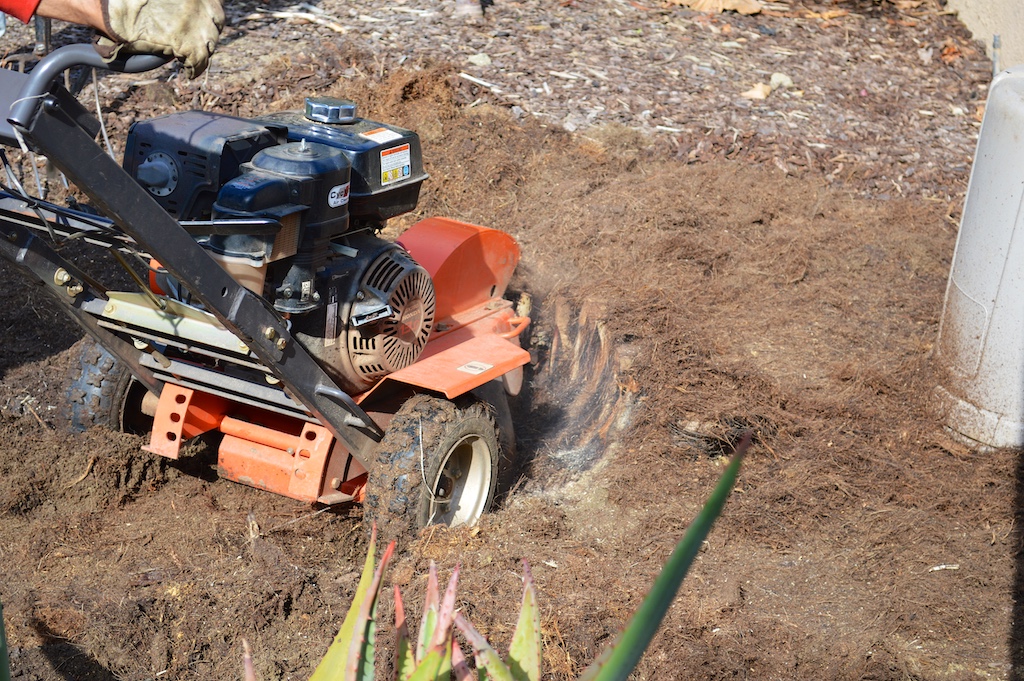 Next up is my Brisbane Box Tree (Lophostemon confertus). This tree was planted almost ten years ago to block the sight of the fence and to help hide the neighbors’ house. It grew fairly quickly and ended up being a great shade tree under which to plant my Acanthophoenix crinita. 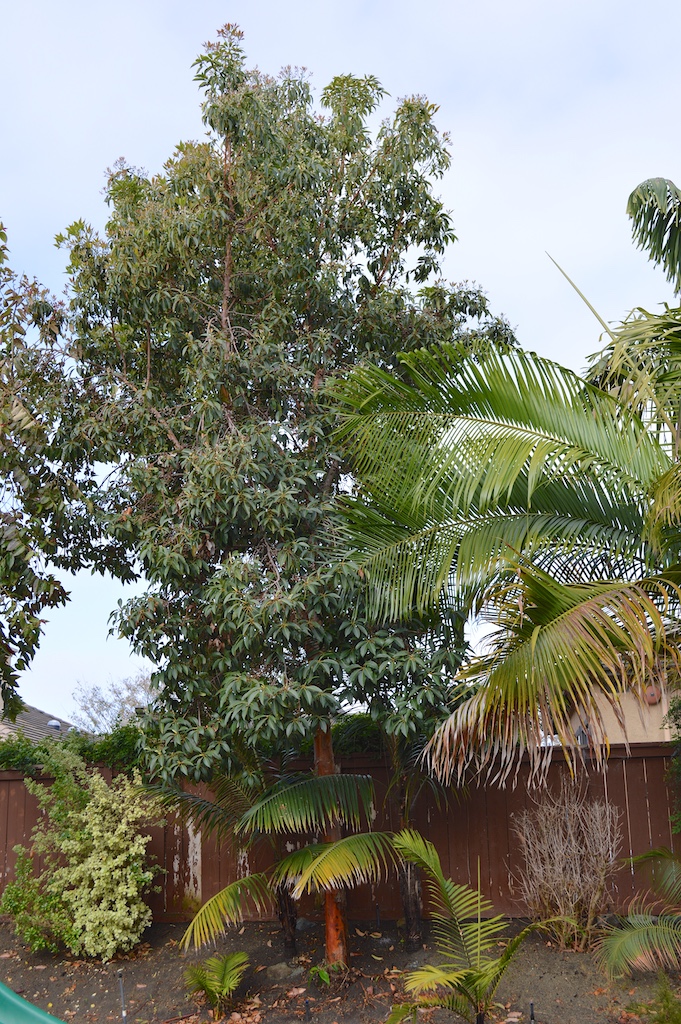 Six years later and my Acanthophoenix crinita had established themselves nicely and were showing signs they wanted to grow in the full sun now. Sadly, it was time for the Lophostemon confertus to go. 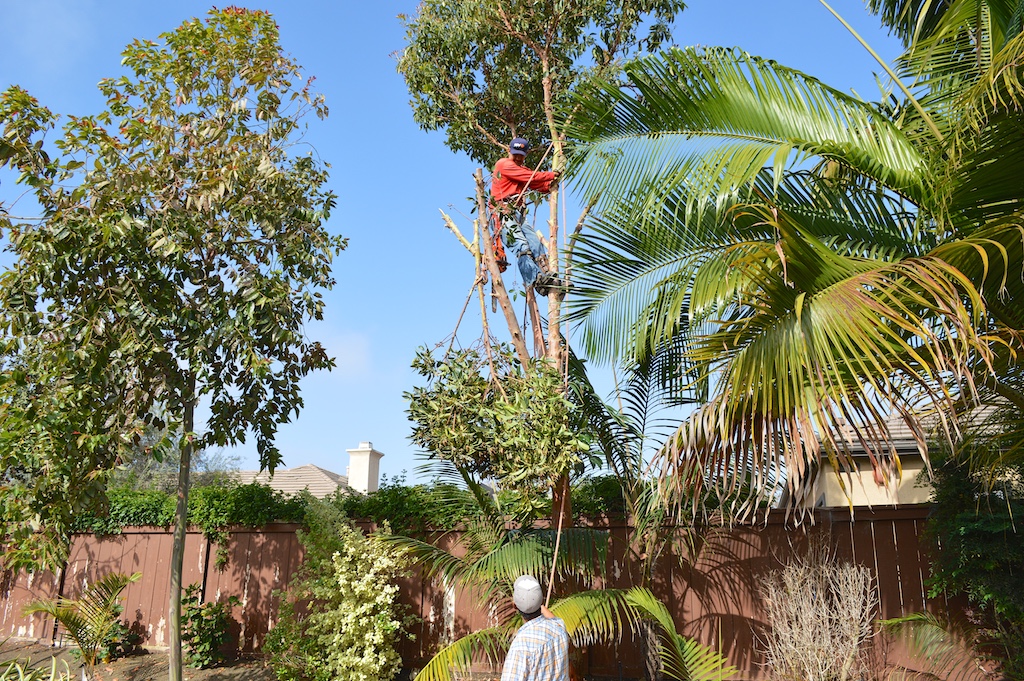 A keen eye might recall the guys removing the tree. It is the same crew I always trust with my garden. This uncle and nephew team have been doing this sort of thing in my landscape for six years now. They understand how much I love my plants so they are always exceptionally careful in making sure nothing is damaged outside the intended targets. It only took them 30 minutes to take this entire tree down! After the grinder is used to mulch the stump, a pretty big hole is left. You can see how big some of the tree’s roots were. 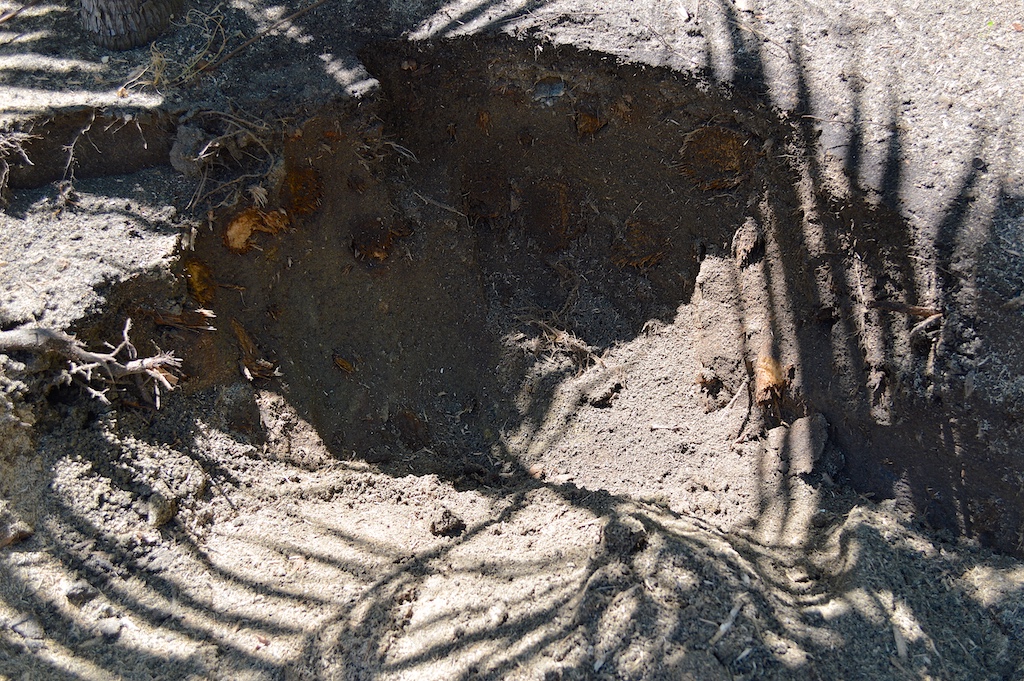 The hole is filled with the mulch from the stump and dirt from around the yard. The result is an area that looks totally different. Those Acanthophoenix crinita will double their rate of growth now that they have full sun. Also, the dead looking plant that is another Coprosma repens ‘Marble Queen’ should rebound now that it isn’t fully shaded. 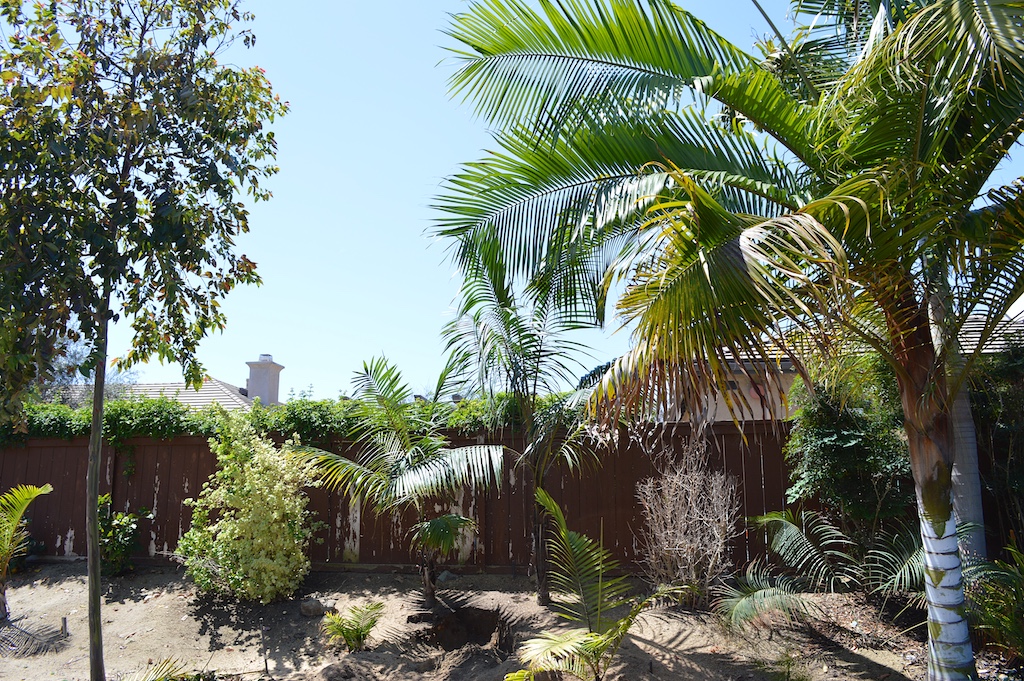 On to the next victim. Another tree. This time it is a Bauhinia forficata. Like the Lophostemon confertu, this tree was an original planting when I first started my garden almost ten years ago. 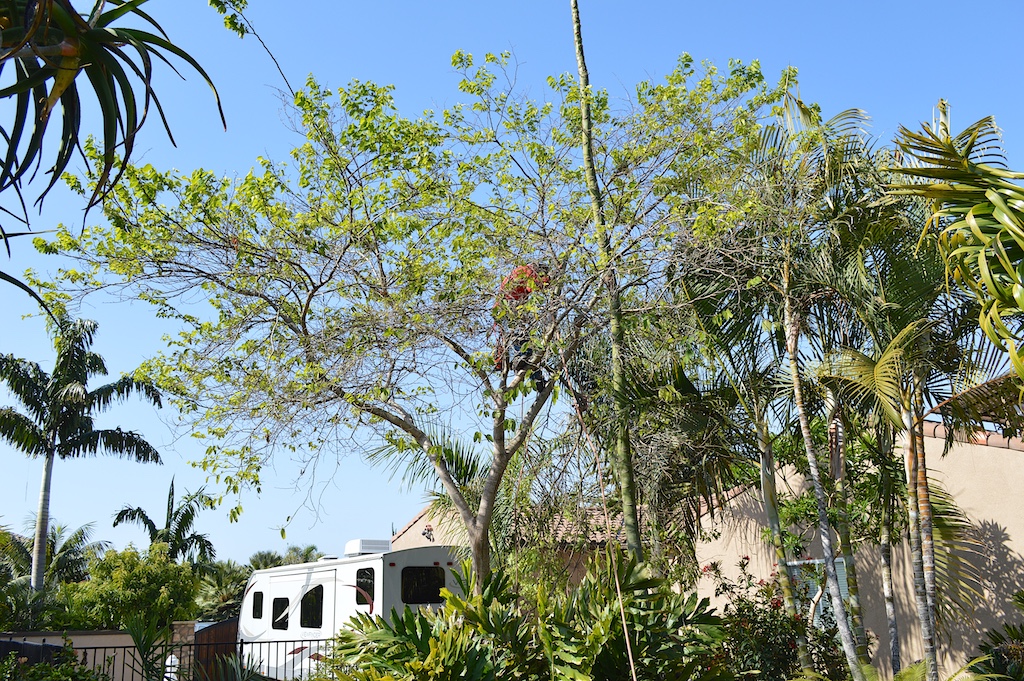 The Bauhinia forficata just got on my nerves more and more each year. For starters, it sends out a ridiculous amount of root suckers. These root suckers always pop up in the worst places too, like from the middle of other plants or from the base of a rare palms. 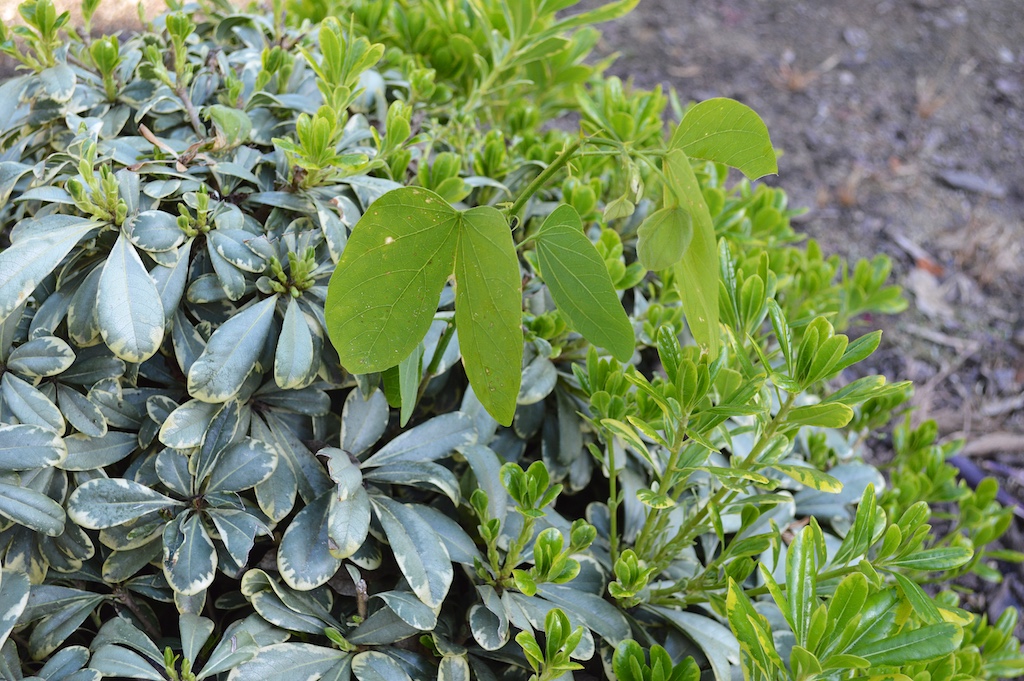 Another annoying characteristic of Bauhinia forficata is that it is a thorny tree. I always seem to forget that its branches and root suckers have these thorns—until they draw blood. The older I get, the less I want thorny plants in my garden. 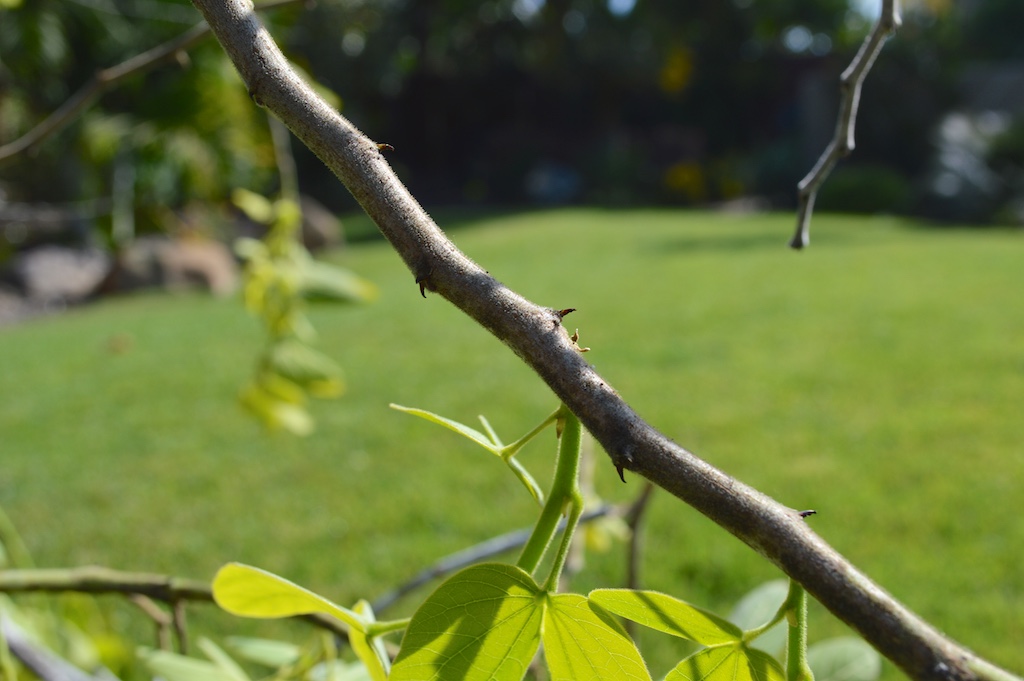 By removing this tree it actually helped me kill two birds with one stone. I have a shade-loving palm (Wallichia densiflora) planted under it that I also wanted to remove but never found the motivation until now. Wallichia densiflora behaves in my garden just like the palm Arenga engleri mentioned earlier. It too is monocarpic and right when it starts to look interesting, one or more of the stems flower each year and have to be cut out. Mine below currently has three stems in flower. 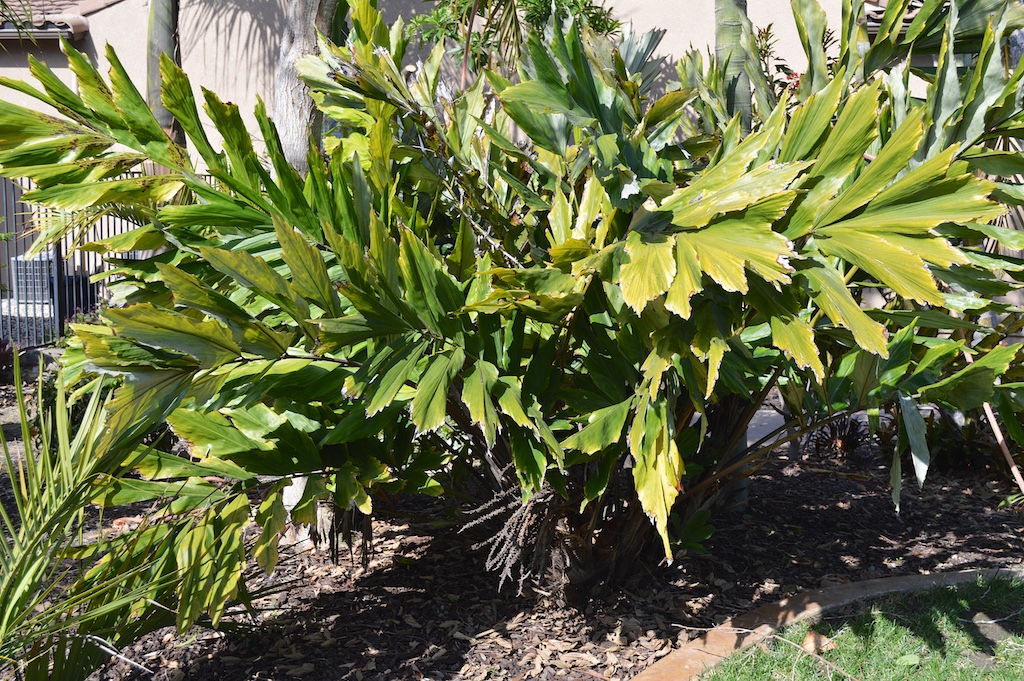 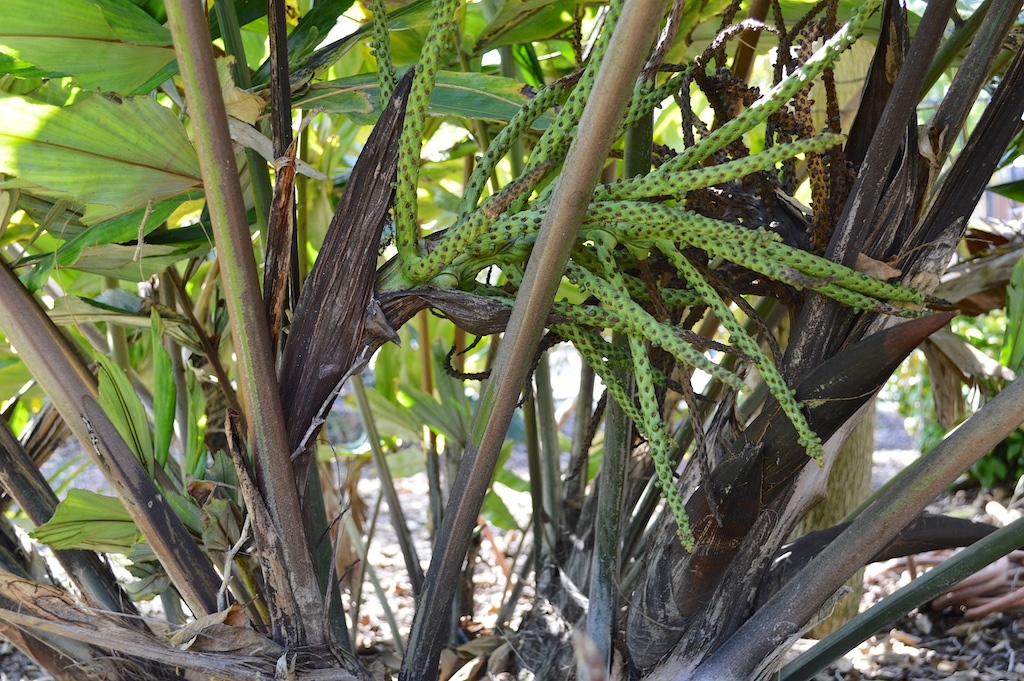 In less then an hour, both the tree and the palm were gone. The stumps were hit with the grinder and this is what we were left with.

A quick clean-up and the area is now ready for new plantings. The additional sun should help the plants growing there now. 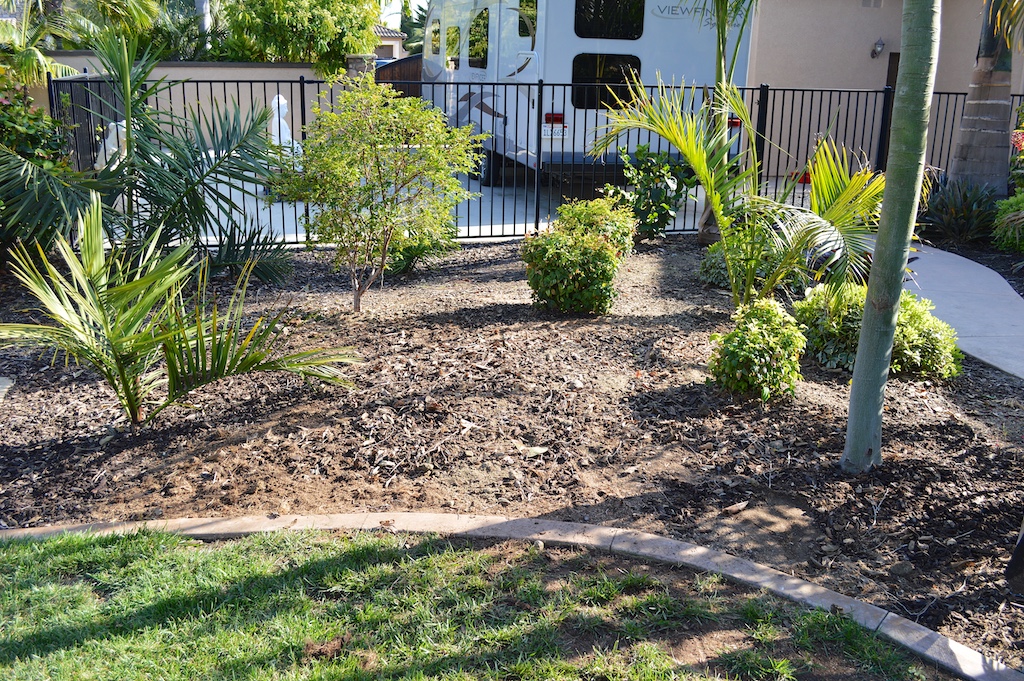 Below is a series of two photos showing a before and after. I have had a Calodendrum capense (Cape Chestnut) planted in my yard since 2006. It has never flowered and for some reason it loses all its leaves not long after it grows new ones. It has done this every year no matter what I do. What you see below is the best it would ever look, and even then it was in the process of shedding all its leaves again. So considering the fact I already had plenty of blood on my hands, I figured what’s another tree or two? 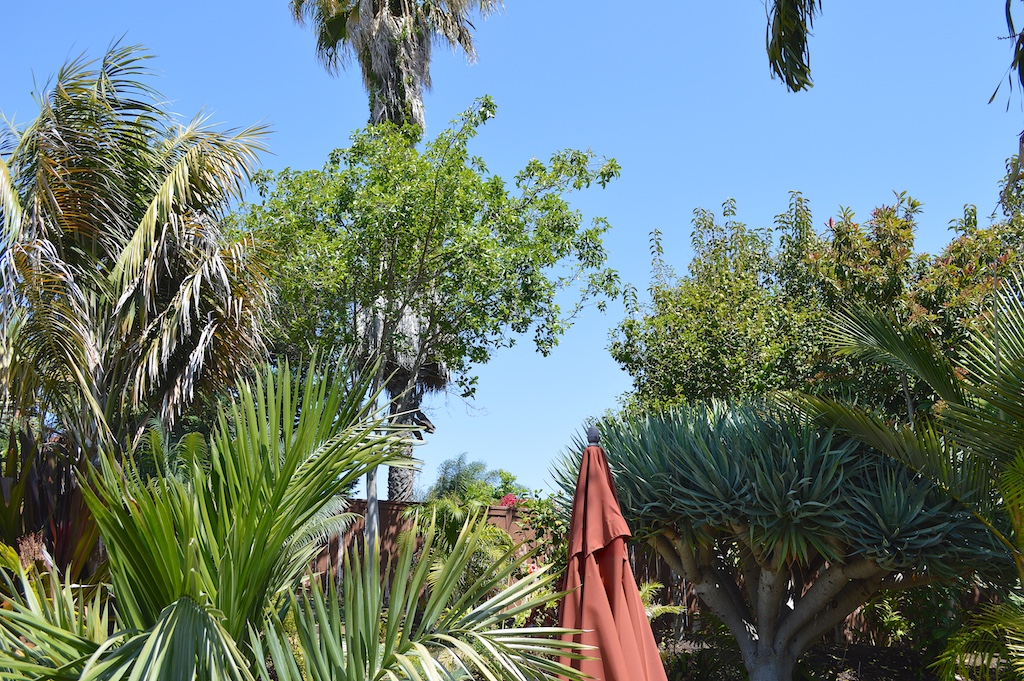 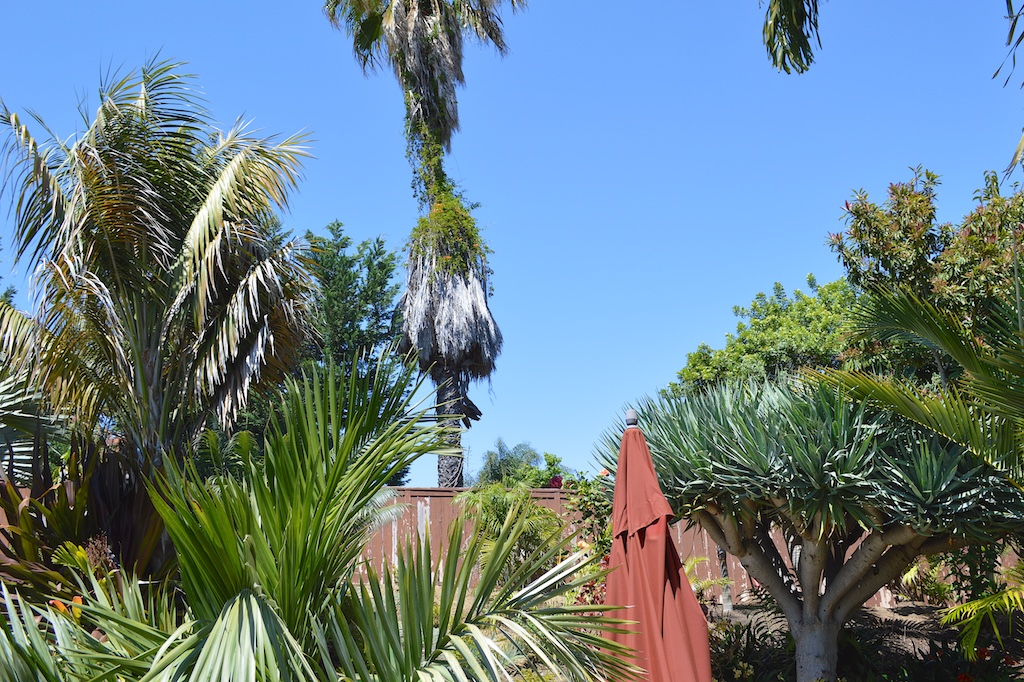 This last one was actually a painful plant for me to decide to remove from my garden. Parajubaea cocoides is a beautiful palm from Ecuador and Colombia. It is a medium-rate grower that eventually matures into a palm that is reminiscent of a Coconut Palm (Cocos nucifera), which is extremely hard to grow in a Mediterranean climate.  The “Mountain Coconut,” as it is called, prefers a cool climate and can be found growing at elevations of up to 9,000 feet in the Andes. Needless to say, Parajubaea cocoides is a very popular palm tree in California. But it has a dark secret it doesn’t like to share until it begins to flower. The secret is that if you are not located in a coastal area in Southern California, it will develop a funk in the crown each year. Below are photos showing my flowering Parajubaea cocoides in the beginning stages of this fungal attack. This is the third year in a row that this has happened and each year I was able to use hydrogen peroxide and Daconil treatments to defeat it. 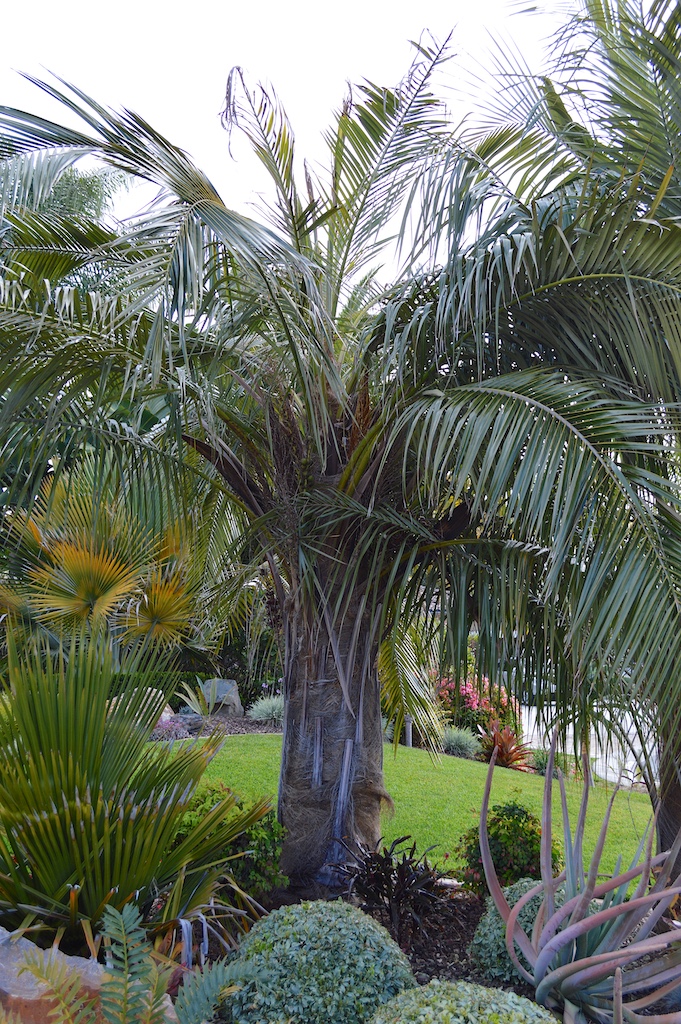 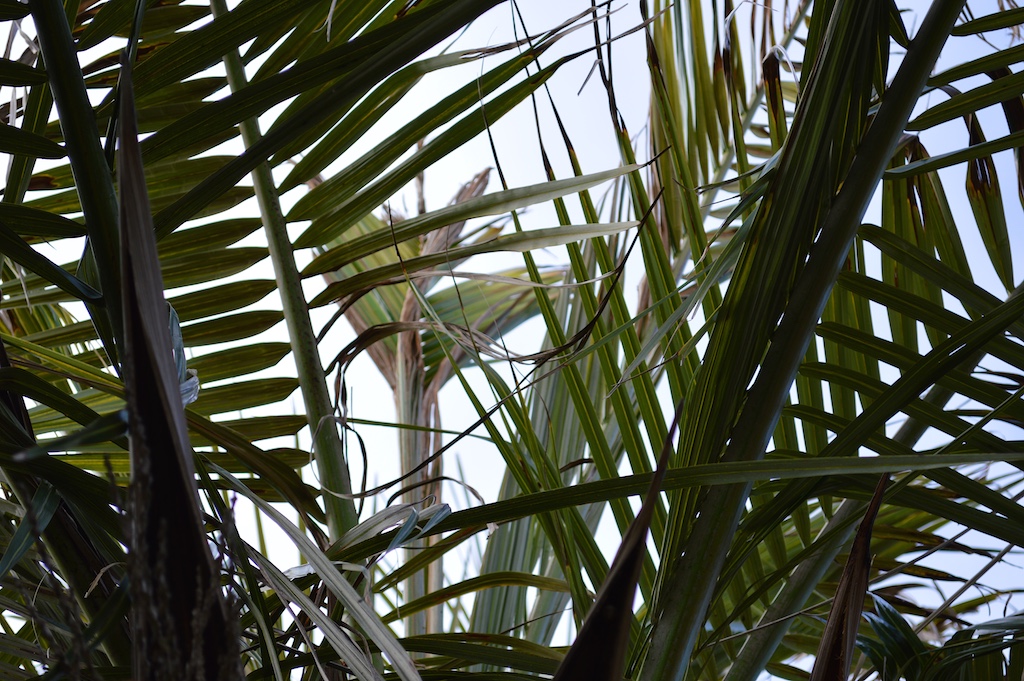 Climbing up on a ladder to apply the fungicide into the crown is something I wouldn’t mind doing periodically if I knew it fixed the issue. But the reality is that this funk will come back every year and as the palm gets larger, it eventually gets so bad it dies of crown rot no matter what you do. I know of about ten different flowering Parajubaea cocoides that have died this way and in each case their owners were diligent in trying to keep the palm from dying. In talking to many of these long-time palm growers, they told me they wished they had just cut theirs down sooner and planted something different. All their years of effort proved to be wasted and each ended up with the same results. It is for this reason that I decided this was the year to stop believing I could be that guy to make chicken salad out of chicken shit. I am most likely just too far inland for Parajubaea cocoides to be perfectly happy. So out come the chainsaw and grinder… 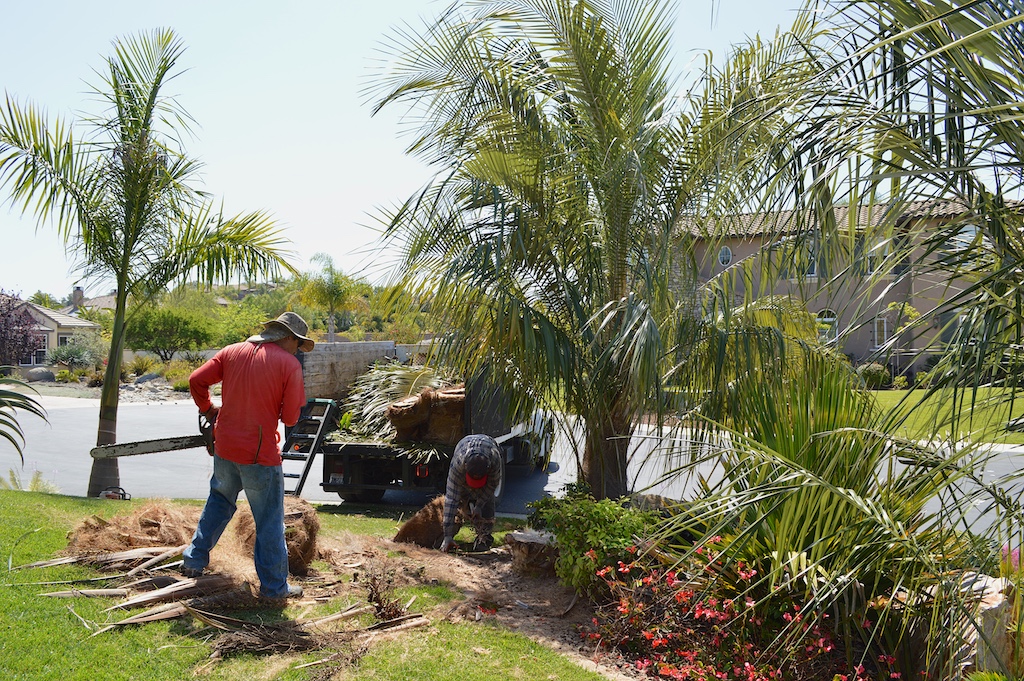 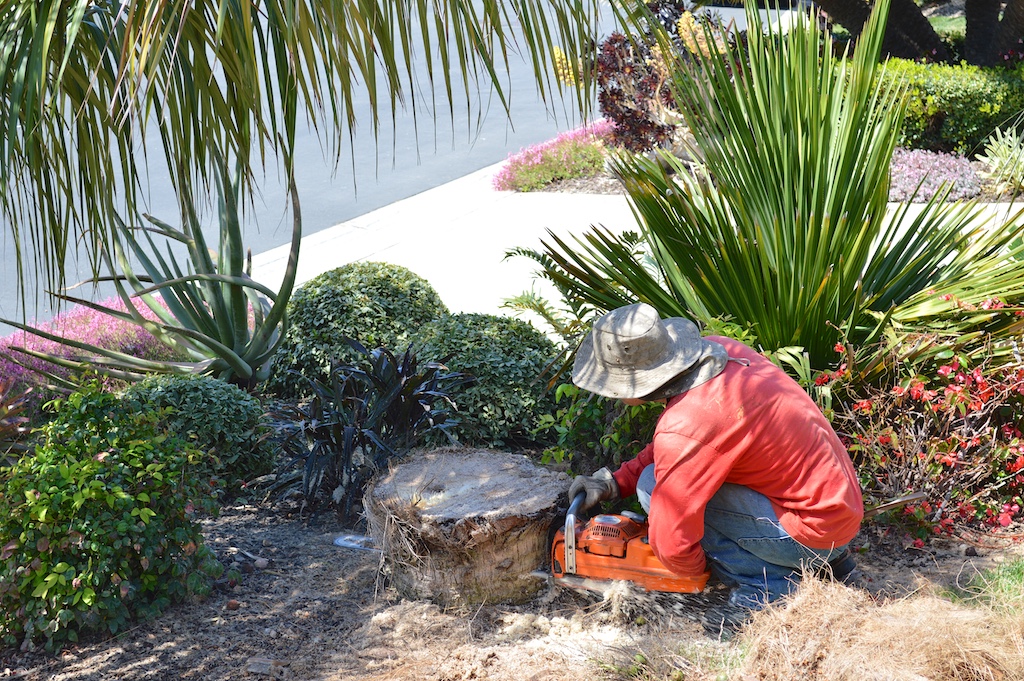 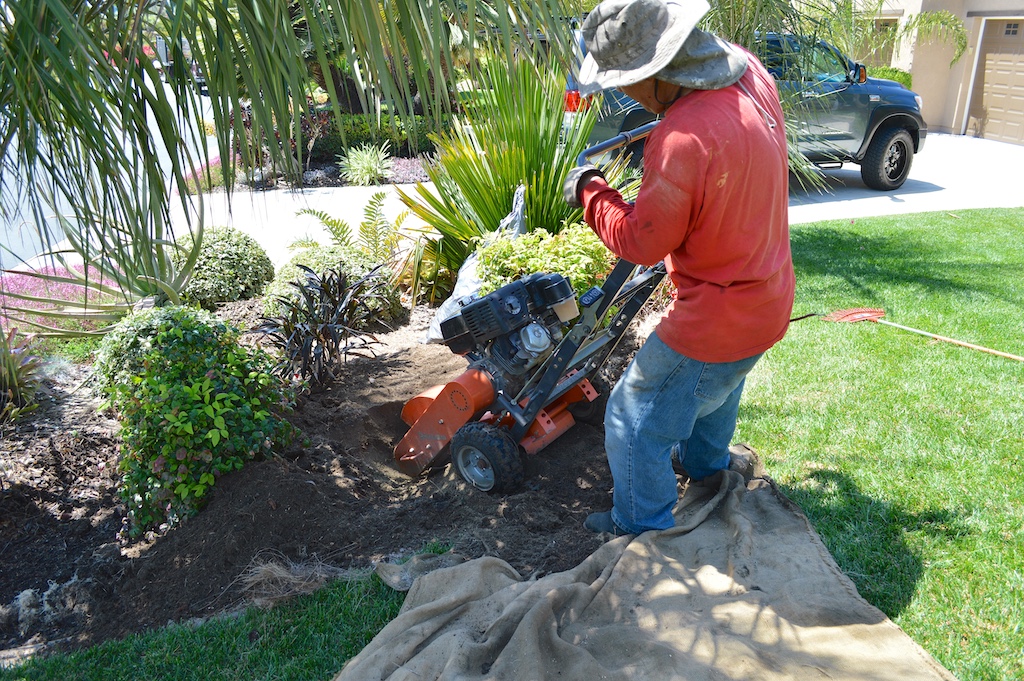 I am quite sure that I have reached the max any plant lover can handle, so I will wrap up this post. But before I do, I am curious, who’s side you on here? Can you “kill” innocent plants with such ease in your garden? Or are you more like my wonderful mother?