So let’s get the tough part out of the way first. The part where I offend some people. It was bound to happen at some point in this post, so let’s just get it over with. I personally find the Mexican Fan Palm (Washingtonia robusta) to be one of the least attractive palm trees in the world. Frankly, I can’t think of a single redeeming quality to be found for them to be planted in my garden. Let’s look at the facts:

1) The leaves themselves are ratty and ugly. No appeal underneath like that found in a Pritchardia.

2) The leaf rachis has sharp spines that love to grab you.

3) The old leaves stay on the tree, giving them a homely look. Eventually they do fall off. Usually in one big purge—sometimes killing someone.

4) The trunk itself lacks any interest.

5) They are aggressive rooters in the garden.

6) When given plenty of water they grow like weeds, shooting into the sky after a few short years.

7) They flower and set seed six months out of the year when happy. The thousands of seed that fall turn into weeds.

8) They are found everywhere in Southern California.

Yes, yes, I know. Beauty is in the eye of the beholder. I get that. But this guy just ain’t beholdin’ any Mexican Fan Palm in my yard. OK, so let’s be fair and balanced. Outside my yard they do have some great qualities:

1) They are one of the most adaptable palms you can grow. I have seen them growing in an unirrigated parking lot in a desert, as well as partially submerged next to a pond.

2) They can handle sand or clay with ease.

3) Their temperate range is impressive: 10–115 °F. Not many other palms can claim that.

4) They grow well in either shade or full sun.

5) It’s a California icon. When tourists head back to wherever they are from, one of the many things that they will recall is these feather dusters in the sky.

I am sure there are other qualities one could bestow upon the Mexican Fan Palm, but that isn’t the point of this post. It is to rant about how ugly they are and tell the story about a beautiful one I found—just outside my backyard.

As most readers already know, the development I live in is only ten years old. But the area is surrounded by much older dwellings. As an example, my neighbor behind me has been in his house since 1962. A landmark that can be seen miles away divides our two developments. What is that landmark? A row of Mexican Fan Palms.

There is an interesting story that goes along with this row of Mexican Fan Palms. This row is what is left of two rows that formed a border along a driveway that ran through them. The row that remains is well over sixty years old. The sister grouping was chopped down when the family that owned the land sold it to the builders that built my tract-housing development. As part of the deal to appease the long-time residents, an easement was given to them so that the one row of plants could survive. Five of these iconic palms now stand sentinel over my backyard, tormenting me with their ugliness each and every day, rubbing salt into my wound by dropping old leaves fifty feet from the air onto my most valued plants and carpet bombing them with seed throughout the warm months.

Sixty years old? How long can these guys live? Surely they will outlast me. Well, unless Mother Nature has any say in the matter. Which she did with one of my neighbors’ Mexican Fan Palms a few doors down. Notice the palm tree on the far left in the photo above? The one with no leaves? That was from a lightning strike last fall. 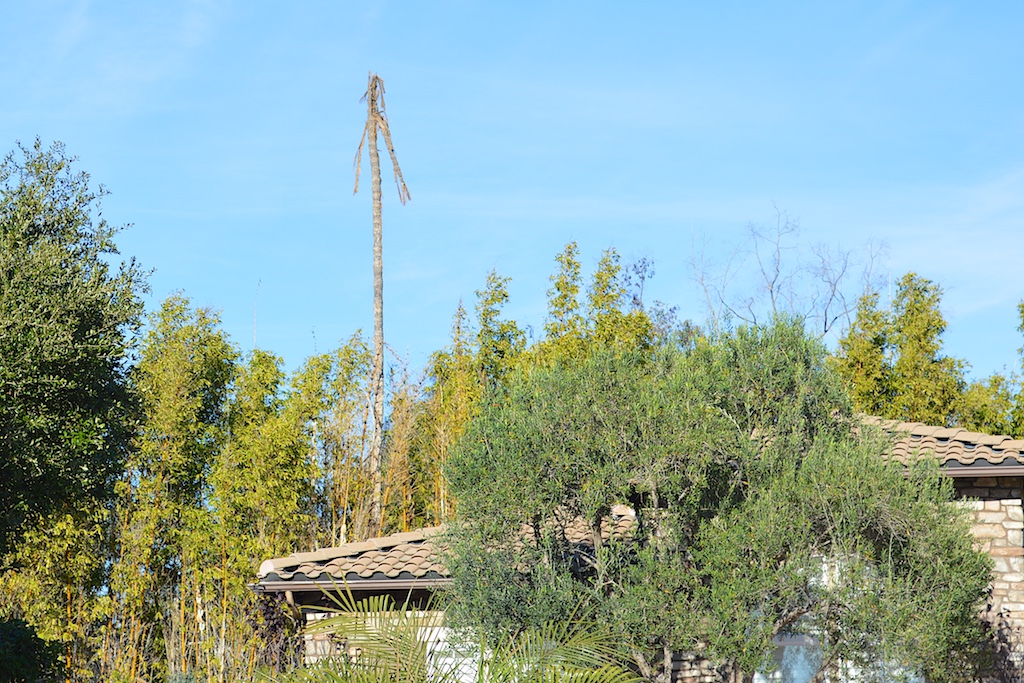 Truth be told, I was sad to see that happen. Maybe I am just a softy like the wife says. But enough of that, let’s get to the reason I wrote this post: to show you how to make a Mexican Fan Palm attractive. The recipe is simple. One part Pyrostegia venusta (Flame Vine) and two parts time. And voilà … 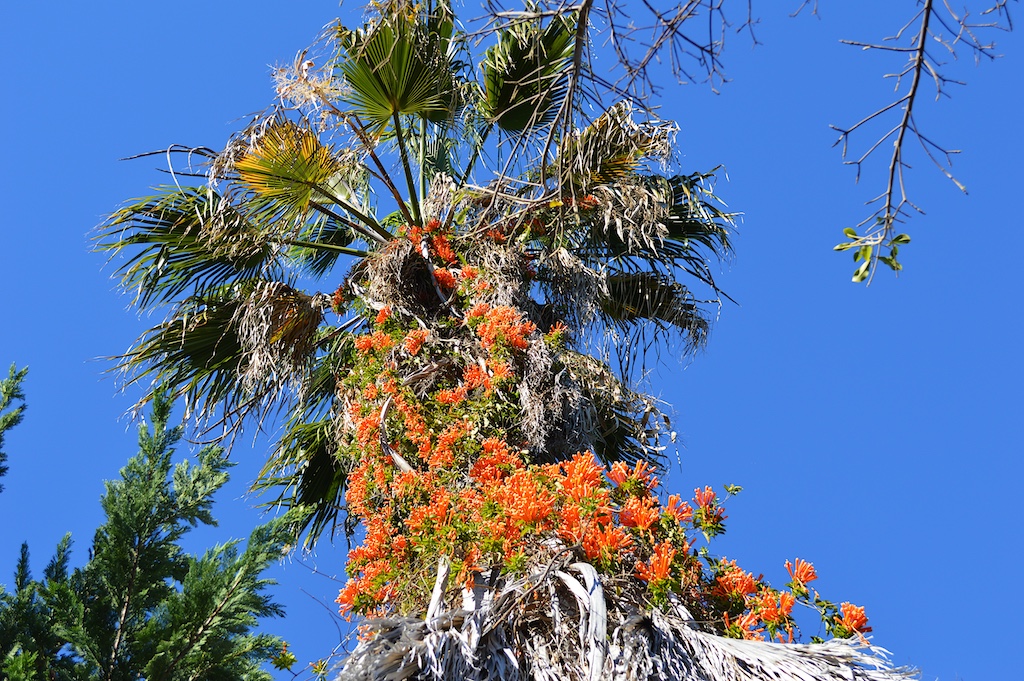 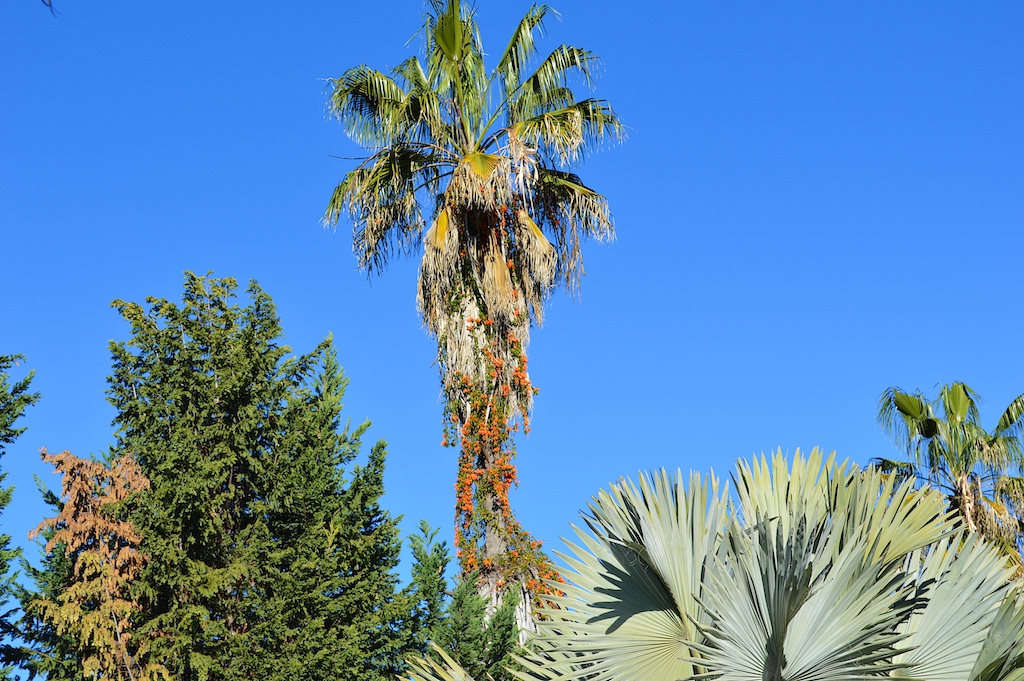 Of the many flowering vines that can be grown here in our Mediterranean climate, the Flame Vine is one of the more beautiful. They have a reputation in tropical areas of being quite a vigorous grower, and if not kept in check one could easily smother whatever it is climbing on. Here in California they are a little more reserved. The flower is an attention-grabbing bright orange and the blooming period can last a few months. Still, the Flame Vine is not planted as often as the more popular vine sections. So I felt lucky my neighbor chose the Flame Vine over, let’s say, a short-blooming Wisteria.

My neighbor told me that he planted the vine roughly ten years ago as his best guess. It was originally intended to help cover a chain link fence. However, it had more lofty goals. Over the years I have been rooting for this guy during its climb. It faced a few hurdles along the way, including limited irrigation and having to fight its way through the skirt of the Mexican Fan Palm (seen below). 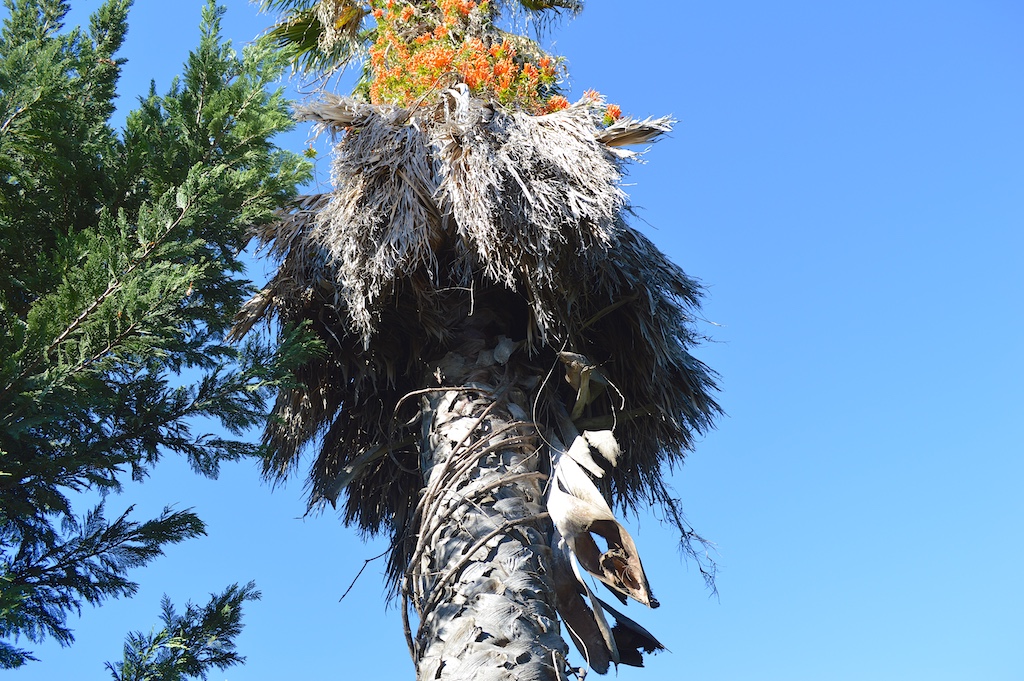 Four years ago the the Flame Vine found a way through that tangled mess of old leaves on the Mexican Fan Palm. Last year it grabbed a hold of a second skirt found farther up the tree and climbed over it. And just this year it finally finished its ten-year journey and reached the top of the tree. You can see how the vine wrapped its way around the trunk of the palm to make its way up the first twelve feet. 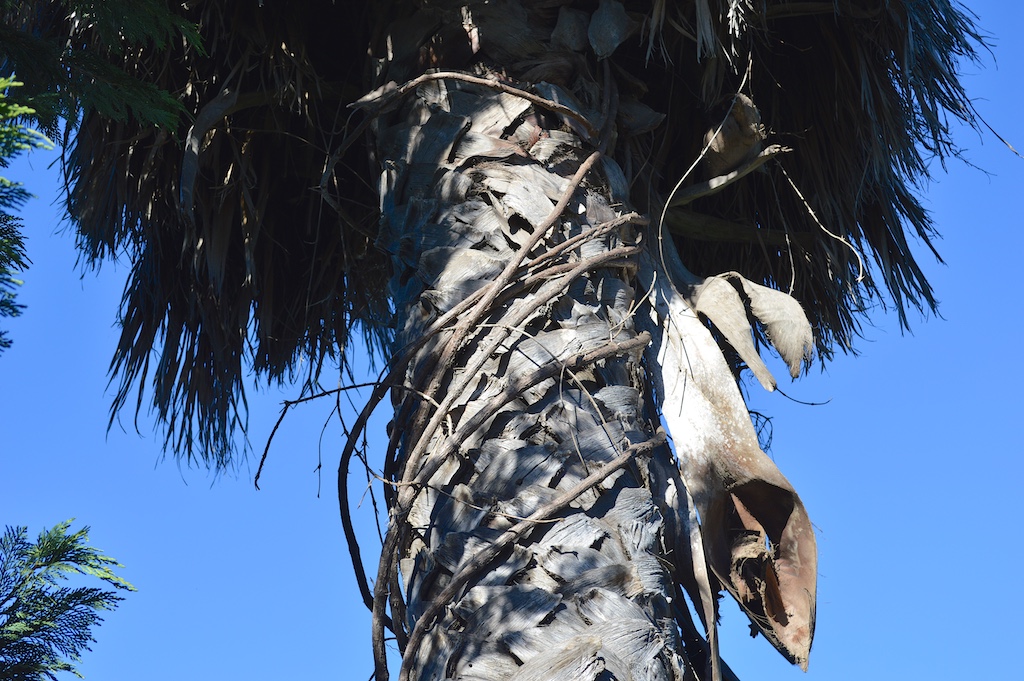 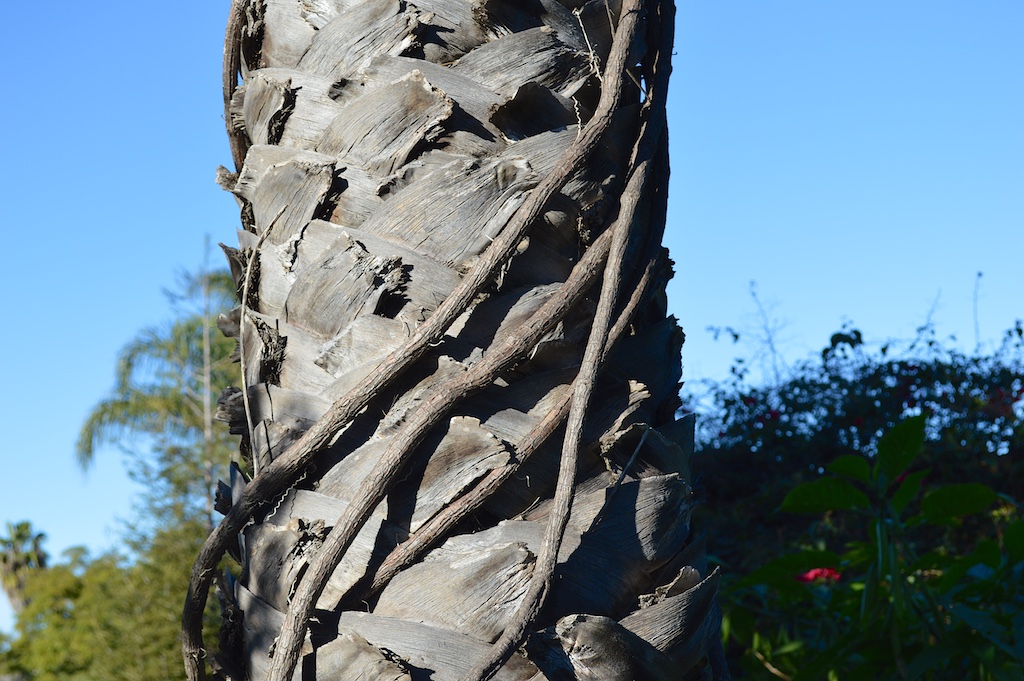 So there you have it. An attractive Mexican Fan Palm. I will add that I take credit for how well the vine has done the last few years. I believe the roots of the Flame Vine have now grown into my well fertigated garden and are stealing some water and fertilizer. The trade-off is the beautification of an eye sore. So this is a trade I will make every time.