There has been one particular area in my garden that has bugged me for quite some time now. It is a highly visible spot that receives a lot of sun year round and is occupied by some of my favorite plants. Lately, in an effort to further meet the water restrictions the drought in California has imposed, I have built more rock gardens and planted more succulents. Some times strictly for appearance purposes I have also upgraded other areas of the garden to include more rocky areas. I documented one change last year where I upgraded a boutique agave planter bed from one with mulch to one with rock and it turned out great.

Last weekend was one of those rare times when I didn’t have any time requirements from honey do’s or kid activities. So, armed with two free days, I decided to make improvements to that small part of my garden that has been bugging me. My weekend project: A new rock garden. Here is what it looked like before I started. 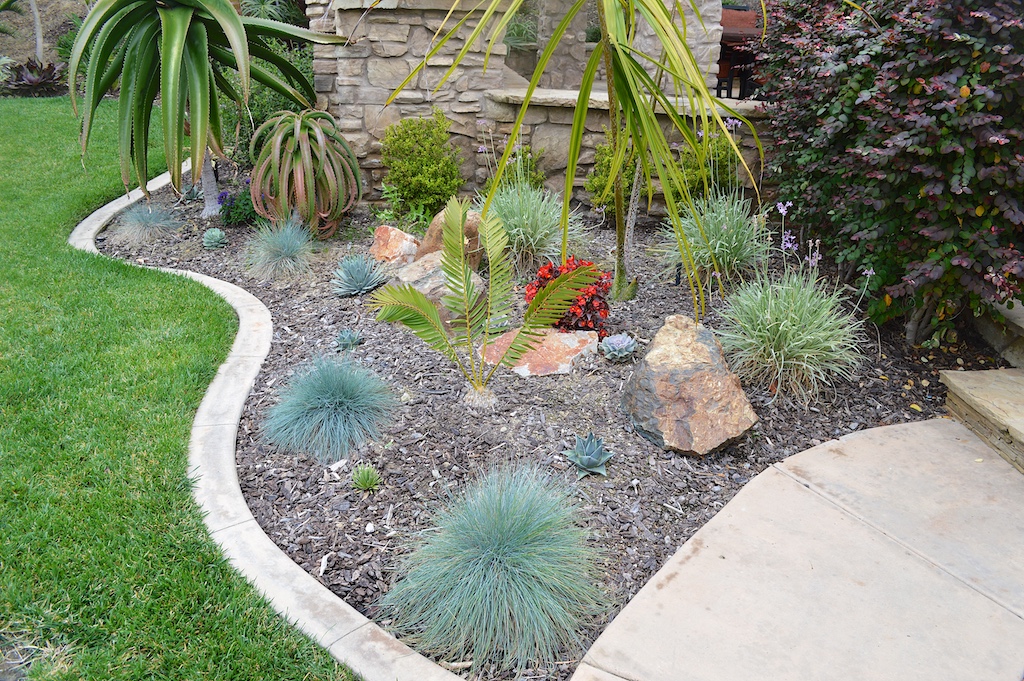 I had three goals in mind. One was to improve the appearance of the area, the second was to show the main plants better in that bed, and the third was to remove the blue fescue and add more succulents so I could cap one sprinkler. One sprinkler here and another there starts to add up, to let you know. So with goals at hand I started my weekend off by getting free rocks from a buddy that was getting rid of a bunch from his property. 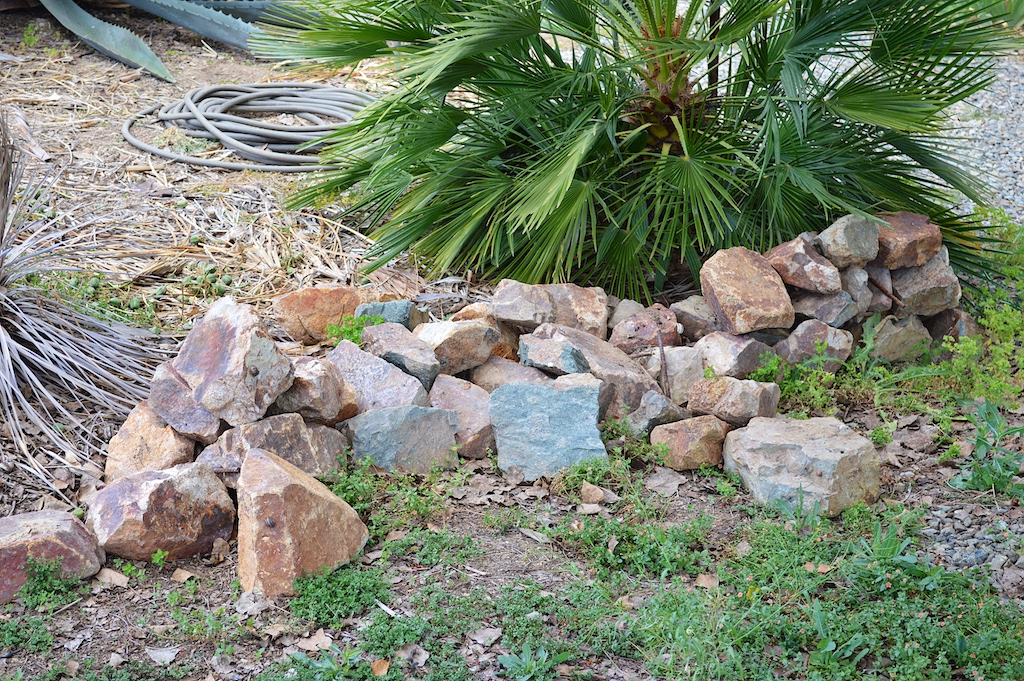 As you can see from the pictures, the rock is quite colorful. In my area it is almost entirely blue granite, which I am not too fond of. The amount of rock in the back of my truck would have cost me $100 or so at the rock yard.

The second step in the rock garden project was to remove all the mulch. If you do not get most of the mulch out you will find that it continues to ‘float’ to the top over time. So better to get it all before you lay down your various rock layers. 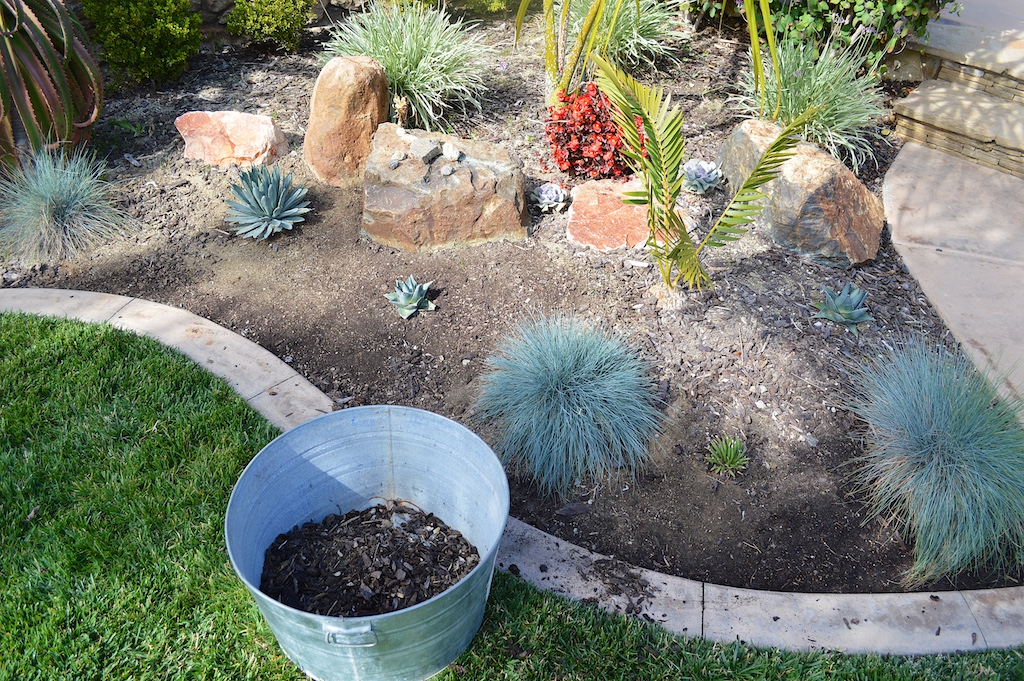 With all the mulch removed, the agaves were already standing out more. Succulents always show better with rock anyway. In many cases their appearance is minimized by other types of ground cover like mulch. Smaller succulents just get lost in a mulched landscape. 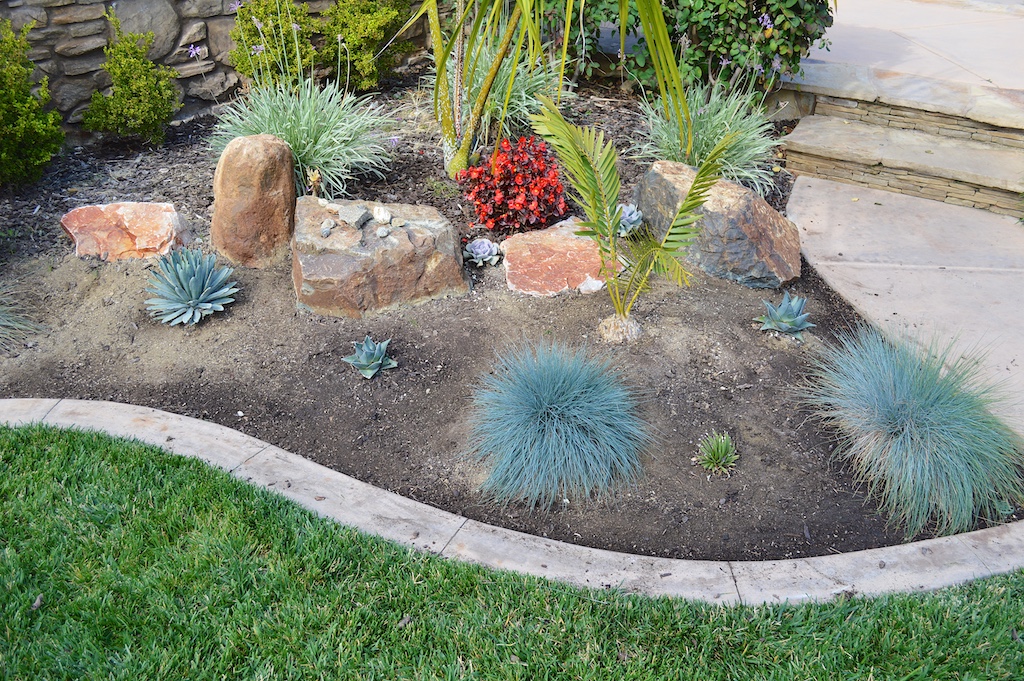 It was during the mulch removal process that I also transplanted two Festuca glauca ‘Elijah Blue.’ Once completed it was time for phase three of the new rock garden project. That involved rock and rubble placement. To me it is the second most important phase of rock garden creation, right behind proper plant selection. The bigger rocks were separated from the rubble and wheelbarrowed into position. 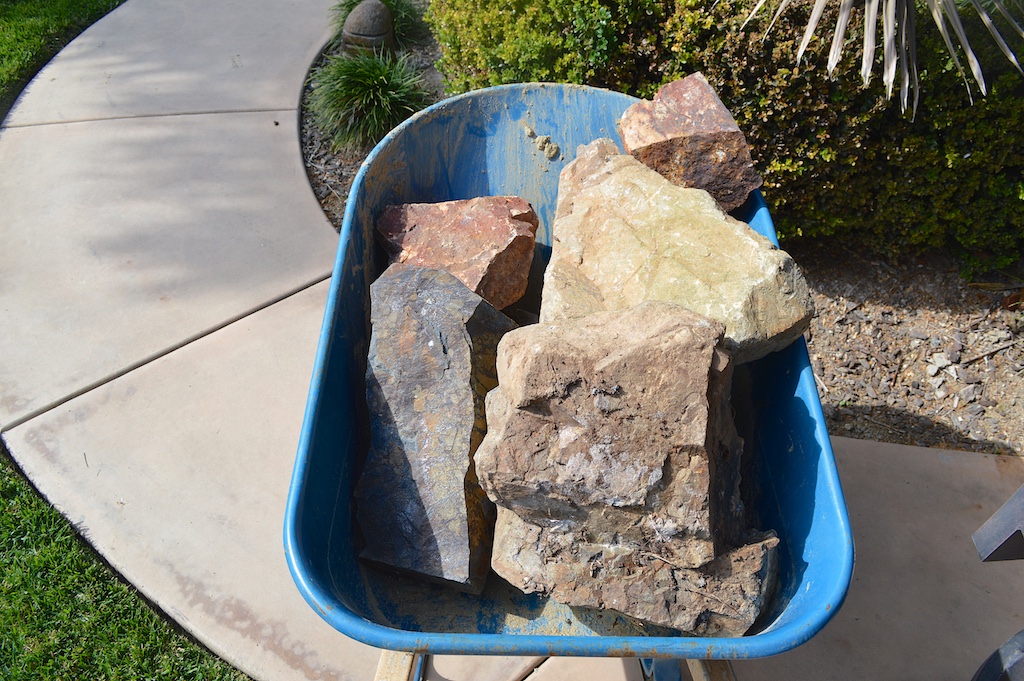 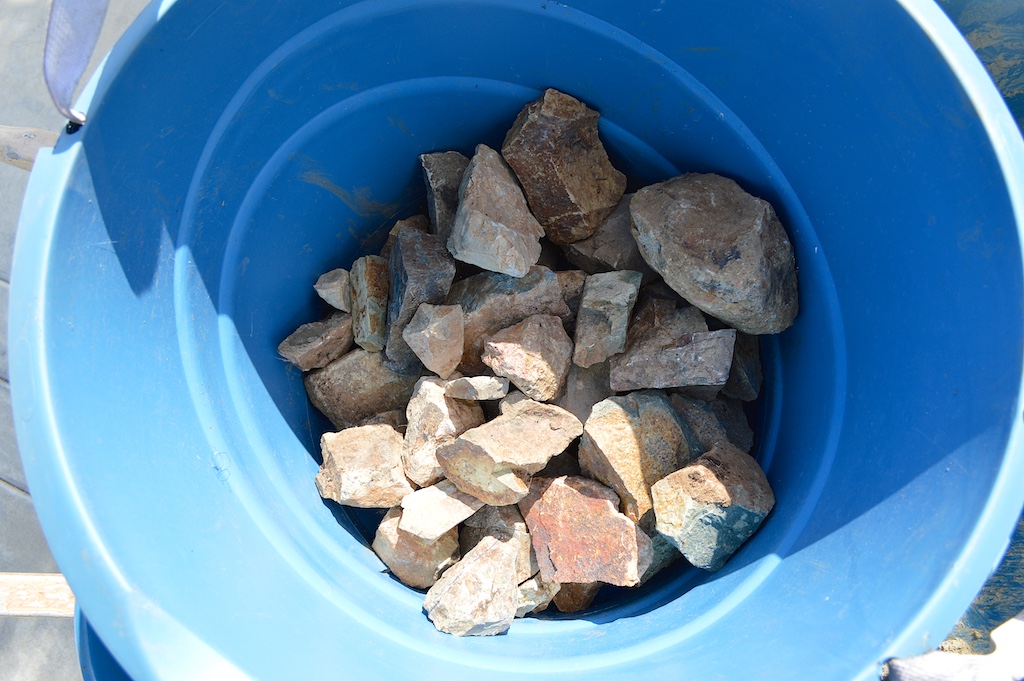 Once all the rock was brought over I could begin placement. I always start with larger rocks in the back and work my way forward. You have to have vision during this stage because it does look odd with rubble seemingly scattered about. Just know things will change drastically once you add all the other layers. 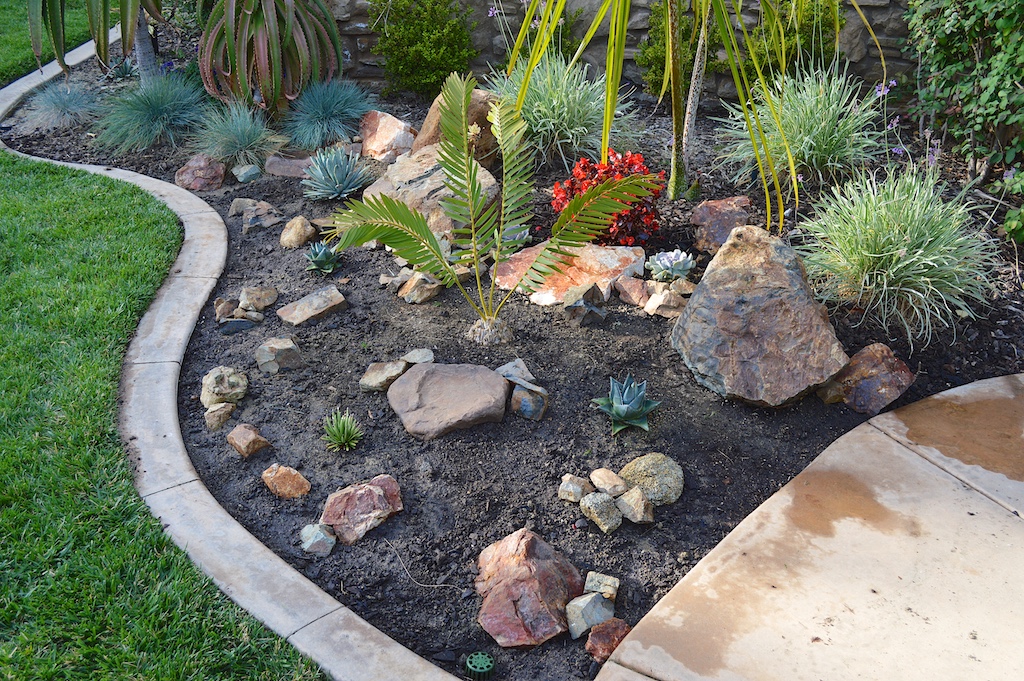 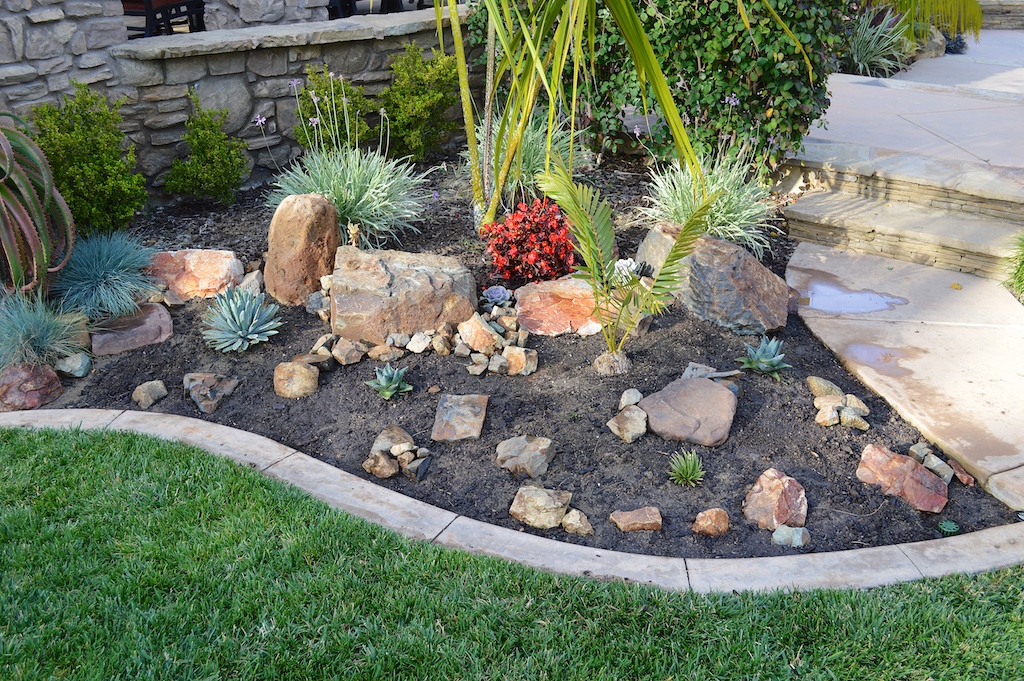 The fourth phase of the project was to lay the base layer of crushed gravel. I do not like using weed fabric for the simple reason that it doesn’t seem to work for the weeds I typically get. So my base layer goes right on top of the soil. For this section of the yard I decided to try some new gravels I have not used before. The base layer was California Gold 3/8” from KRC Rock. 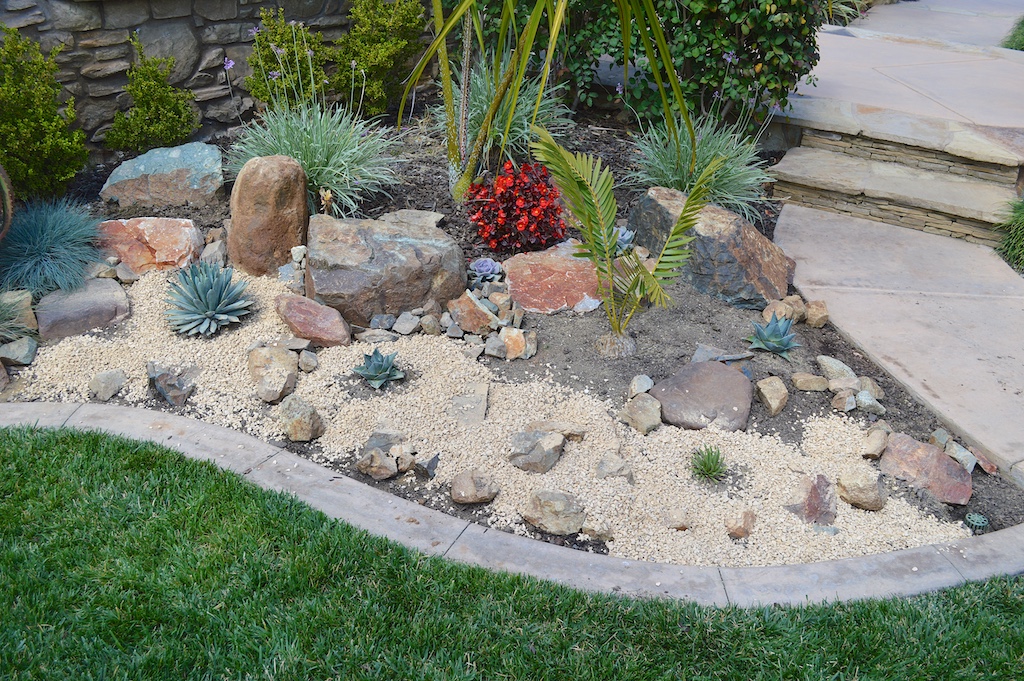 The fifth step was to lay down my “tapering” layer. I like to use a 3/4-inch crushed gravel to taper down from the larger rocks and rubble to the smaller crushed gravel base layer. To me, tapering gives the design a more natural feel. Similar to what you might find in habitat. I decided on Carroll Canyon 3/4″ for this project. 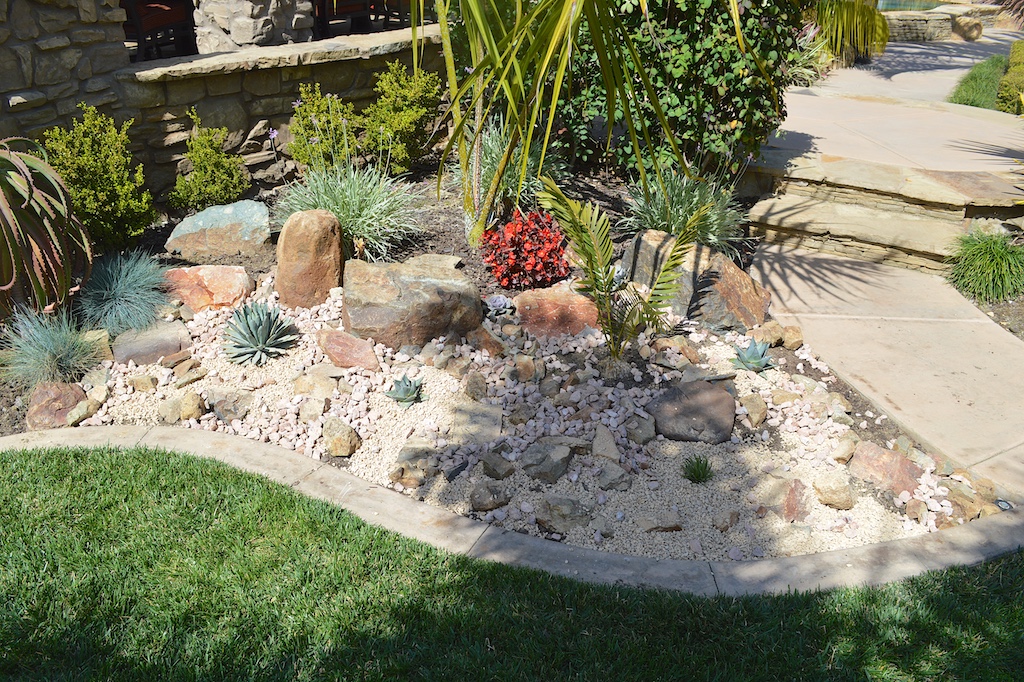 Next I put down the “filler” crushed gravel. This is the finer-sized crushed gravel that I use to fill in gaps and help give the design an even more natural look. When in nature, you don’t see crushed gravel all of one uniform size. So your landscape shouldn’t have it either. For this I went with a product from KRC Rock called California Gold Chip Seal.

The seventh and final step in the new rock garden design was to scatter some colored crushed gravel to break up all the California Gold I used. I went with the same Carroll Canyon rock I used to taper, but went with 3/8″ instead here. In total I used six different rock types and five different sizes. I think it turned out great. Not overbearing enough to take away from the plants, yet colored and layered enough to be appreciated on its own.

Here is the finished project once it was hosed down for pictures. The five original plants are really popping now, which if you recall, was one of the goals I had. Those five plants from left to right are Agave macroacantha ‘Blue Ribbon,’ Agave pumila (2), Agave albopilosa, and my pride and joy – Encephalartos heenanii. Just outside the rock garden you will find a few key plants from left to right: Aloe vaotsanda, Echeveria ‘After Glow,’ Echeveria ‘Cubic Frost’ (2) and Dypsis mananjarensis. 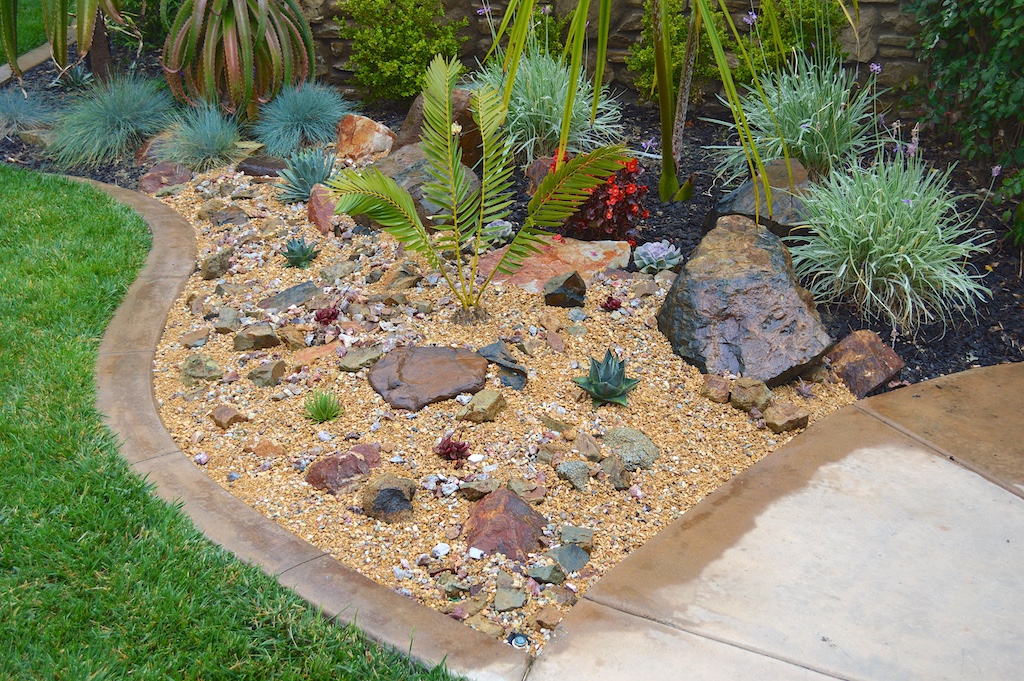 Along with the original plants listed above, I also added a few new ones to the planter bed. Looking for a dense, low-grounding succulent, I settled on Crassula pubescens spp. radicans. The common name is Red Carpet Stonecrop and it was exactly what I was looking for, so I ended up planting three. It only grows to a height of 4-6 inches, and once happy will spread a few feet. Of course it can also be kept smaller. 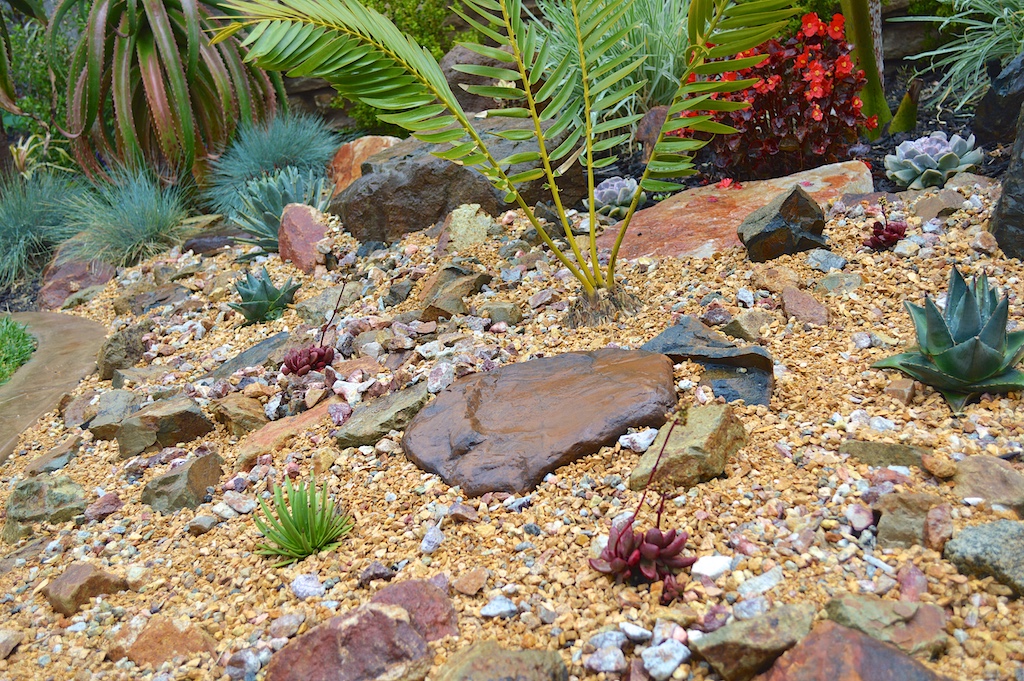 I also planted two more of the dwarf aloes that I have become a fan of in the last year or so. The first is a hybrid called “Donnie” and the second was purchased as “Unknown Hybrid.” It looked like a winner to me so I bought it. Both are slow growing and won’t take up much room. 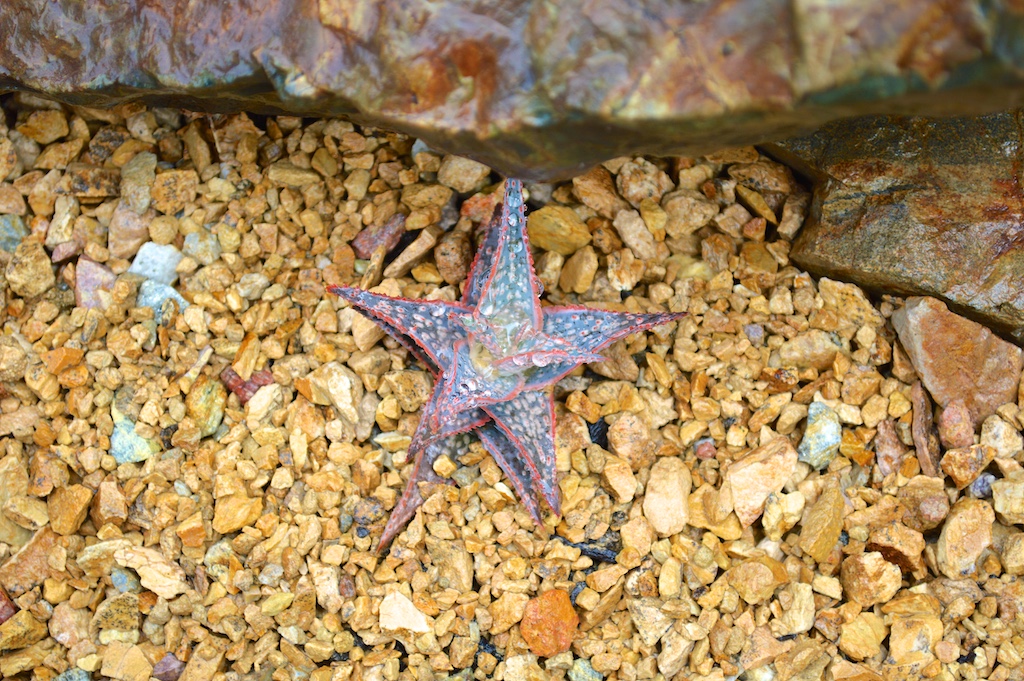 Right now the new rock garden looks a little bare compared to what most succulent gardeners might be accustomed to. For me personally, I don’t like cramming a bunch of succulents together. While the colors and textures can look great, I find that individual plants get lost too easily. Plus, with an acre to manage, I also don’t have the time to maintain a succulent tapestry. Once my four agaves and three Crassula pubescens ssp radicans have a few more years’ growth under their belt, the new rock garden will fill in nicely.

When comparing the before and after photos, the changes are quite notable. A weekend well spent. 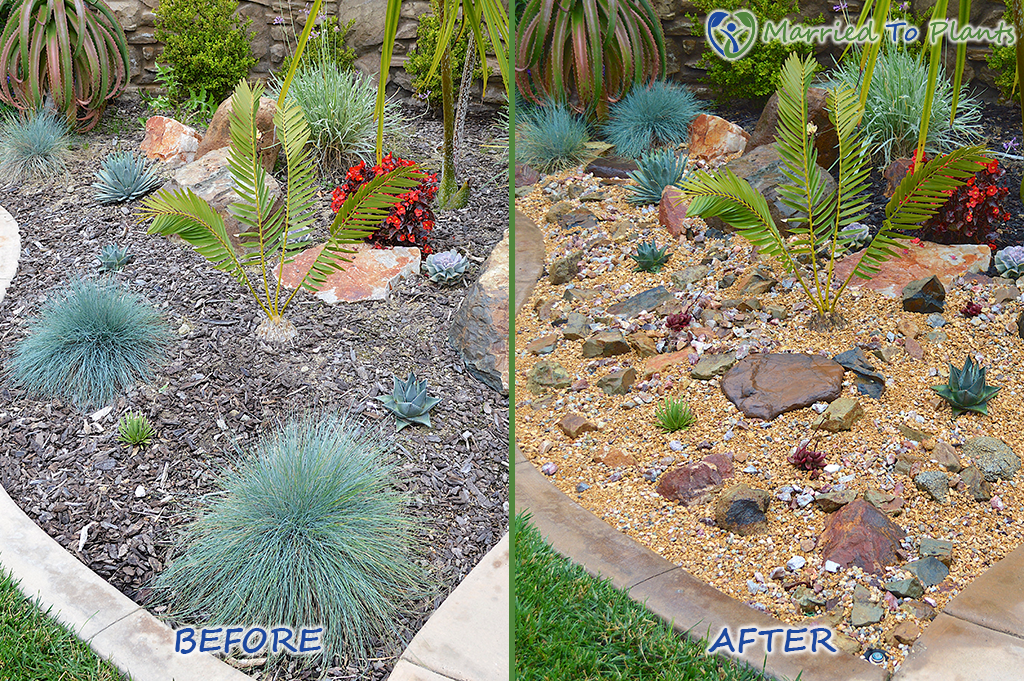