Cycads are what I consider to be one of the most underused plant groups in people’s landscapes. Sure, some can be spiny and expensive, but the tradeoff certainly outweighs these possible negatives. For example, how many other plants can you grow in your garden that actually increase in value with each flush of new leaves? Cycads were one of the first plant groups I began adding to the garden from a collector’s standpoint. A neighbor took me to a backyard grower’s nursery and from that point on I was hooked. At last count I have 130 different cycads planted in my garden.

Many of the visitors that come to my garden will often look at a cycad and ask me, “What kind of palm tree is that?” The fact that the most common cycad in the world is actually incorrectly labeled a “Sago Palm” doesn’t help here. Once I explain that they are actually looking at a plant that has outlived the dinosaurs and is roughly (and arguably) 320 million years old, they become quite amazed. Cycads are true living fossils. So yes, the reality is that cycads are often confused for palm trees to the uninitiated, but amazingly enough, cycads are actually more closely related to conifer trees than palms. Why? Because cycads are a group of cone-bearing plants that are the oldest seed plants in the world. In simple terms, this means that cycads do not produce true flowers or fruit, just one or more large seed cones.

Cycads are dioecious, so cycad cones are either male or female. Botanically speaking, the male cone is a microsporophyll and the female cone is a megasporophyll. If you wish to produce your own offspring, you will need a male and female of each plant for reproduction. In most cases, male and female cycad cones are distinct from each other. Below is the attractive dark-colored male cone of an Encephalartos horridus. 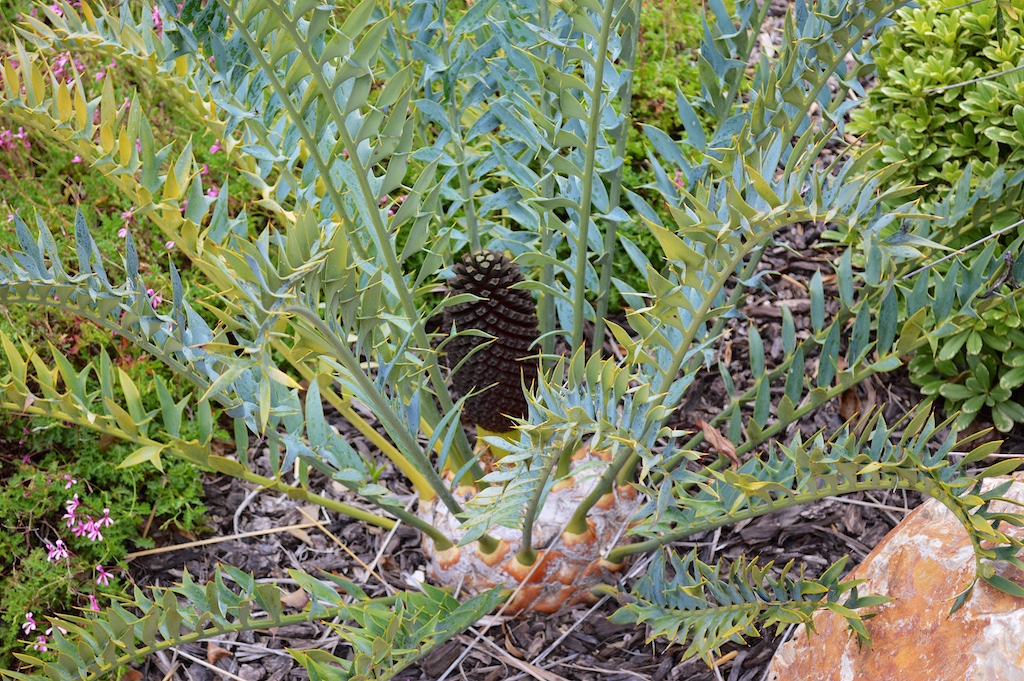 Encephalartos horridus is one of the more commonly seen South African cycads found in collections. The blue leaves and brutally spiny leaflets make it popular for gardeners. Below is a female cone to show the difference between the two sexes. 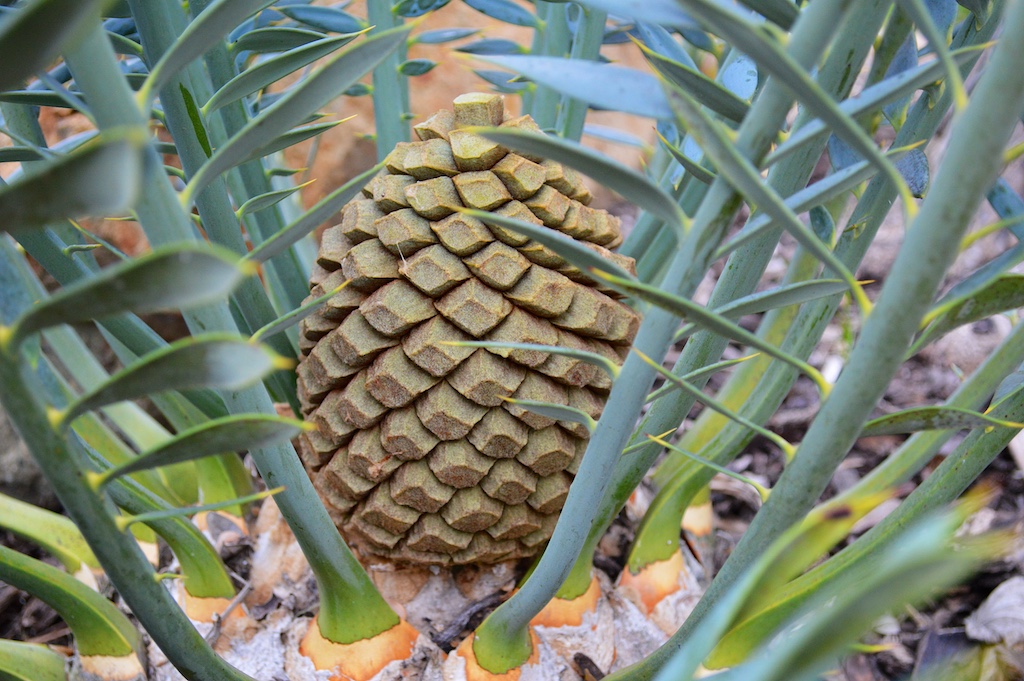 The cone hidden among the spiny leaves makes for a great resting spot and one with excellent protection from predators for my Brown Anole Lizards that have colonized my yard. 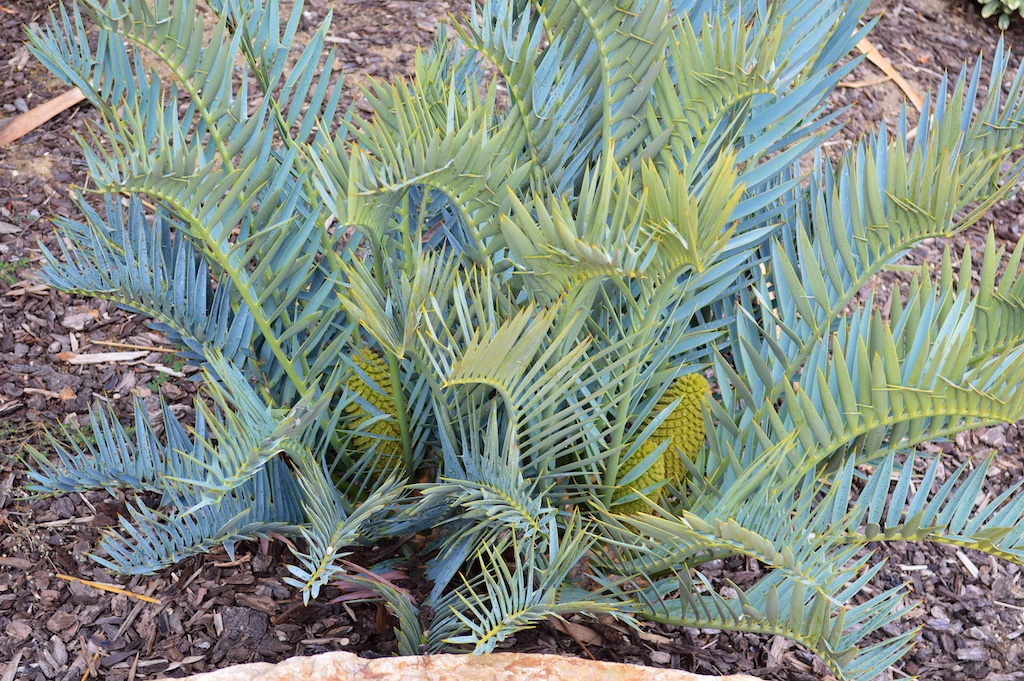 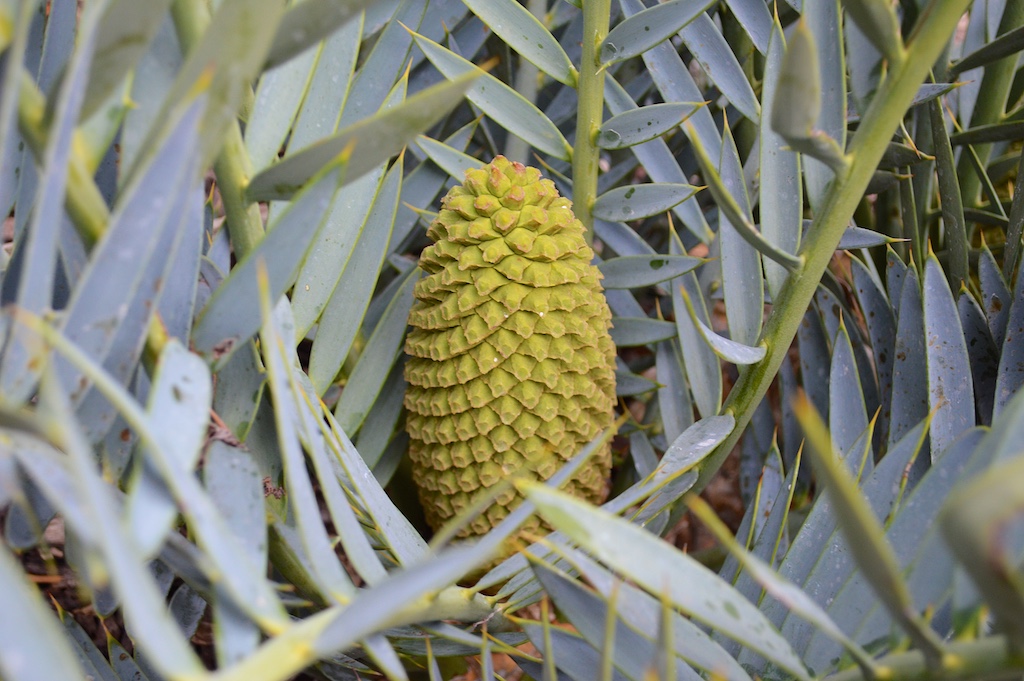 So how do these seed cones get fertilized if they are not flowers? As I mentioned before, cycads are closely related to conifers. And like conifers, they are both gymnosperms. This basically means the unfertilized seeds found in the female cone are open to be directly fertilized from the male cones’ pollen—a much simpler process than the more complex fertilization arrangements found in flowering plants (angiosperms).  As with angiosperms, insects are the primary pollinators, beetles being the most common for cycads.

Below are two female cycad cones on my Lepidozamia peroffskyana that are almost ready to open and be fertilized. 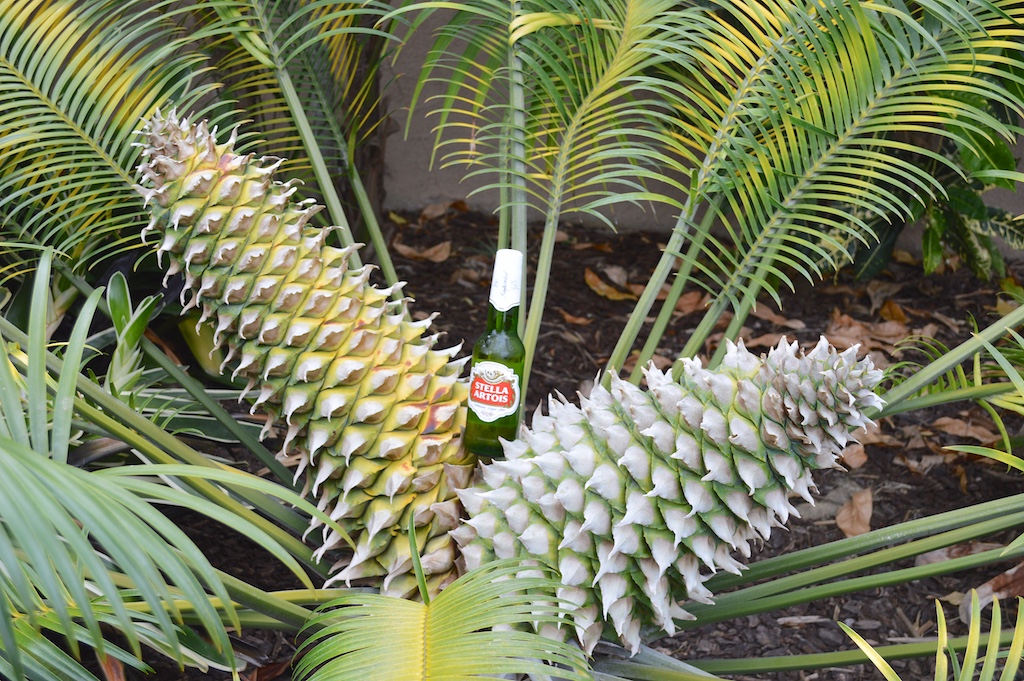 The bottle of Stella was used to provide some scale to give you a better idea of how big cycad cones can be. The Lepidozamia peroffskyana cones above are not even close to being the largest the cones in the cycad world. However, they are the largest in my cycad collection. The smallest? How about these Zamia kickxii male cones. 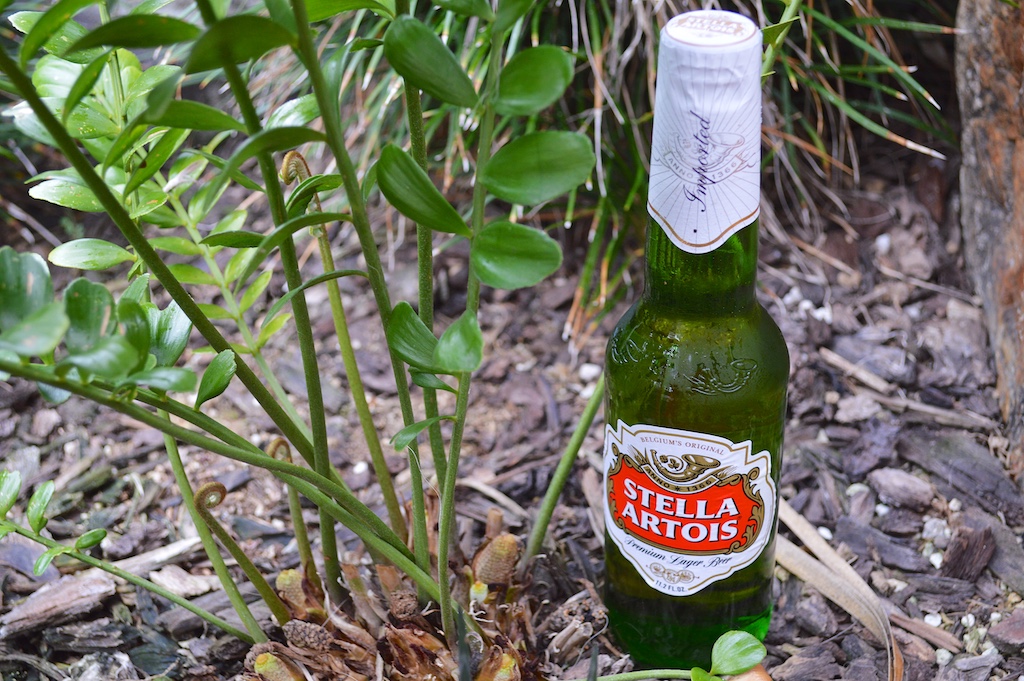 Cycad cones can also be quite colorful. It is hard to miss this Cycas thouarsii male cone in the garden. 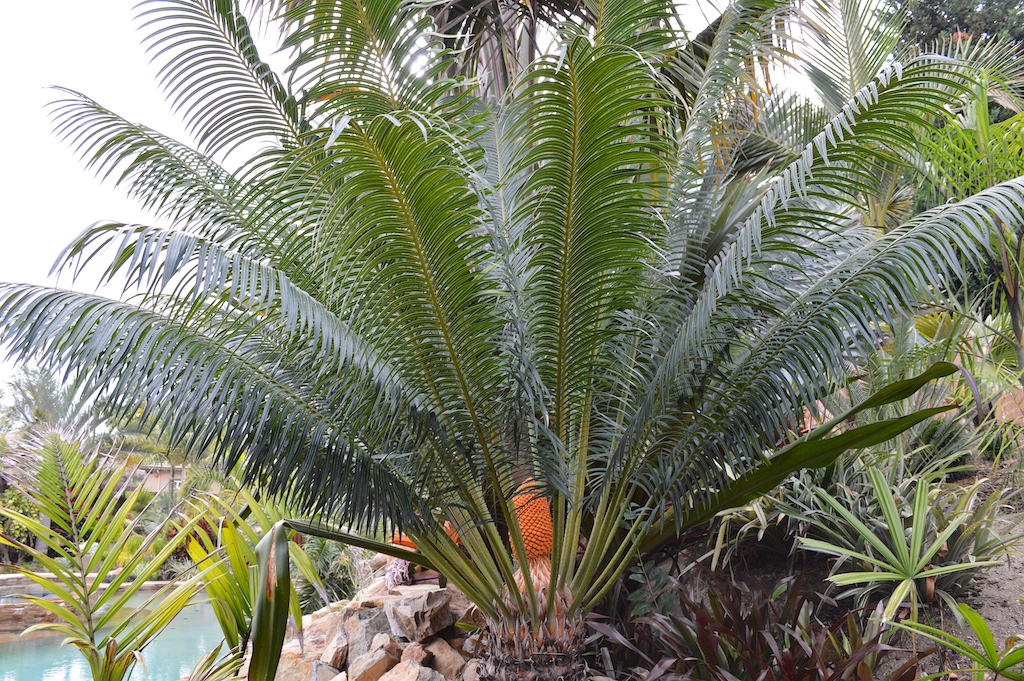 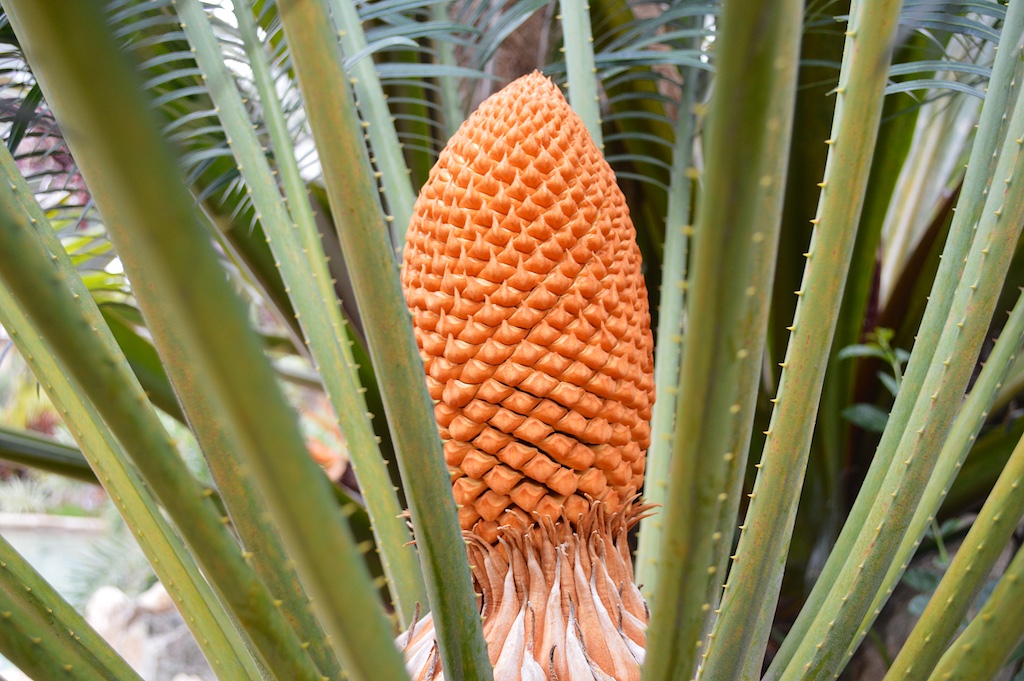 In my opinion (and the opinion of most cycad collectors), the most colorful cone in the cycad world belongs to a coastal Mozambique cycad called Encephalartos ferox. Some cones of Encephalartos ferox are actually fire engine red. It is an amazing sight to see. My plant is the ‘Curly Leaf’ form and the male cones are orange. Still pretty, but nothing like the red Encephalartos ferox cones I have seen in person in other gardens. 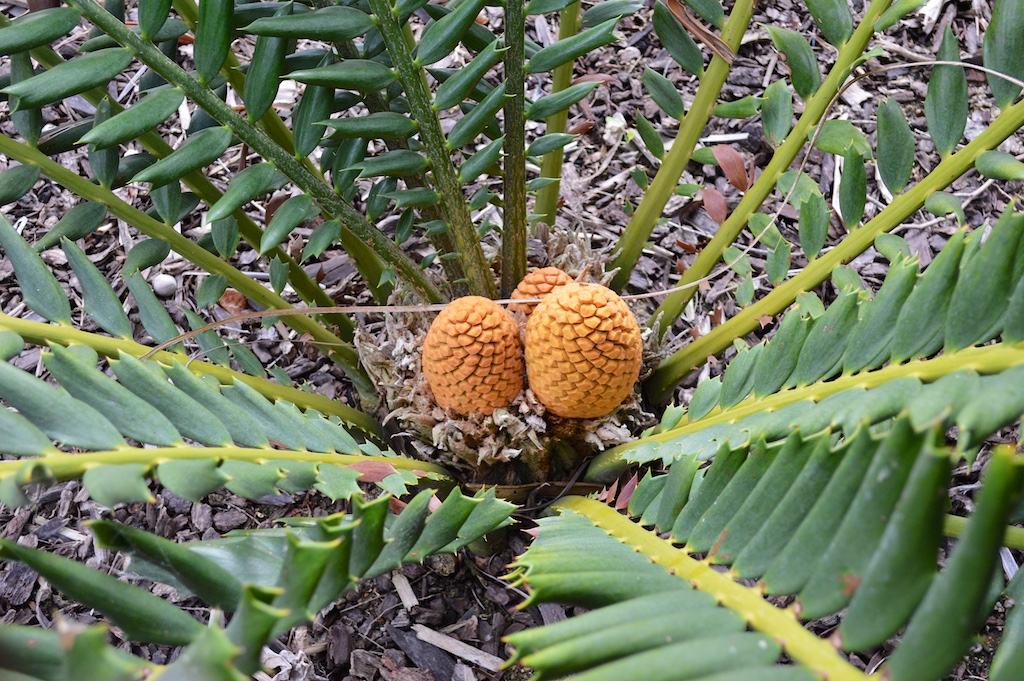 So how long does it take a fertilized seed to become viable and ready to germinate? This of course depends on the species and when the seed is released from the disintegrating cone. On the fast end we can have viable seed in 6 months. On the slow end it can take up to 18 months. Many cycad species actually release their seed with immature embryos, so even more time is required to allow the embryo to develop to maturity before being able to germinate. This process can add anywhere from a few weeks to a few months. Once you take into consideration how slow many cycads are to grow to maturity after germination, it is no wonder they are expensive plants. For some cycads, this whole lifecycle can take decades.

These two female cones below of a Ceratozamia vovidesii and Ceratozamia latifolia (respectively) take almost a year to go from fertilization to being able to germinate. 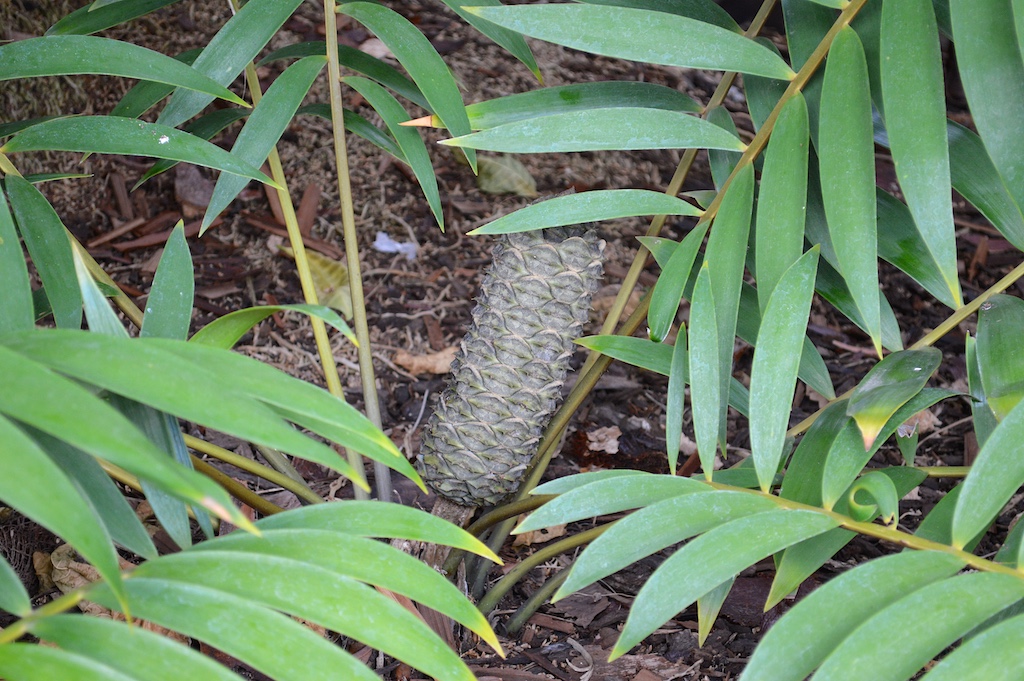 Cycads are a wonderful addition to any garden. Whether it is a tropical landscape or a water-wise rock garden, cycads are sure to make unique focal points. As a bonus, once your cycads reach maturity and cone, it just adds to the growing pleasure. Plus being able to fertilize your own cones and germinate your own seed adds a new dimension to the gardening experience. In essence, you can become a mad scientist.  For example, back in the spring of 2014 I manually fertilized my female Encephalartos trispinosus with a blue Encephalartos arenarius. Here are the results after 1.5 years. This just shows that growing cycads is an exercise in patience but one that comes with great rewards. 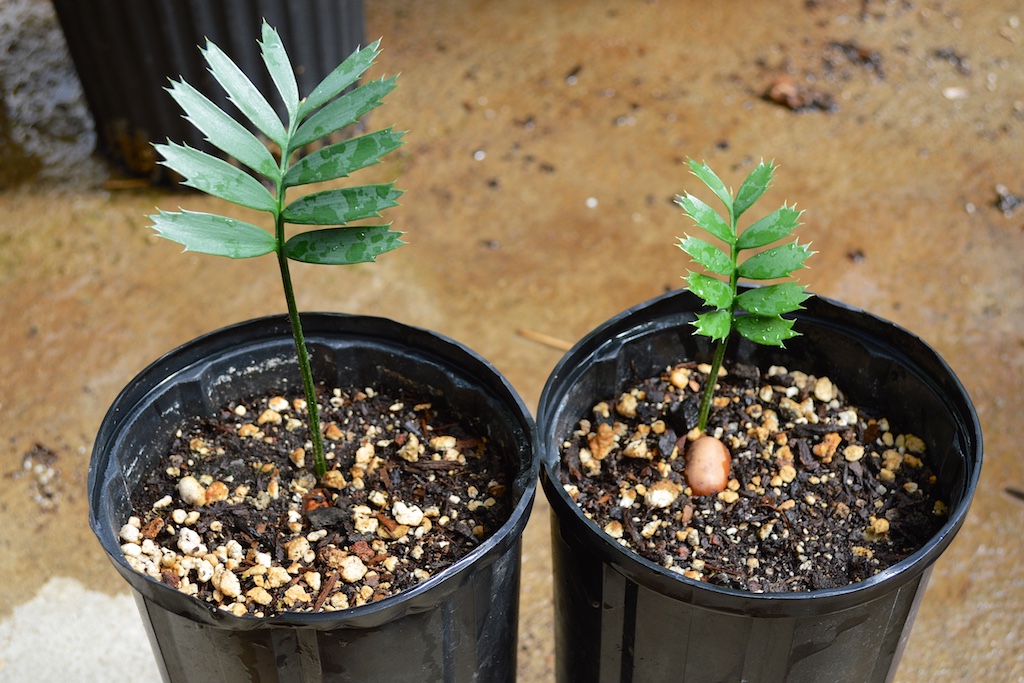