Readers quite often request updates on the various post that I have made in the past. Sometimes it is because a post may have been left open-ended, but most the times it is because someone wants to know how things turned out. In looking over the last year of post on Married To Plants, these were the ones that I believe needed some updates.

Many might recall that in March I decided that it was time to rip out an under-perfmoring palm that resided on a prime piece of real estate in my garden. I had been determined it would be replaced with an Aloe ‘Hellskloof Bells’. That aloe was a much better choice for an area that gets very little water but is hot in the summer from the surrounding rock. Its clustering habit and vertical growth would fill in nicely over the years. Here it is today. You will notice that I also replaced some other plantings around that area and added crushed gravel for the mulching layer. Personally, I believe it looks a lot better from when I started. 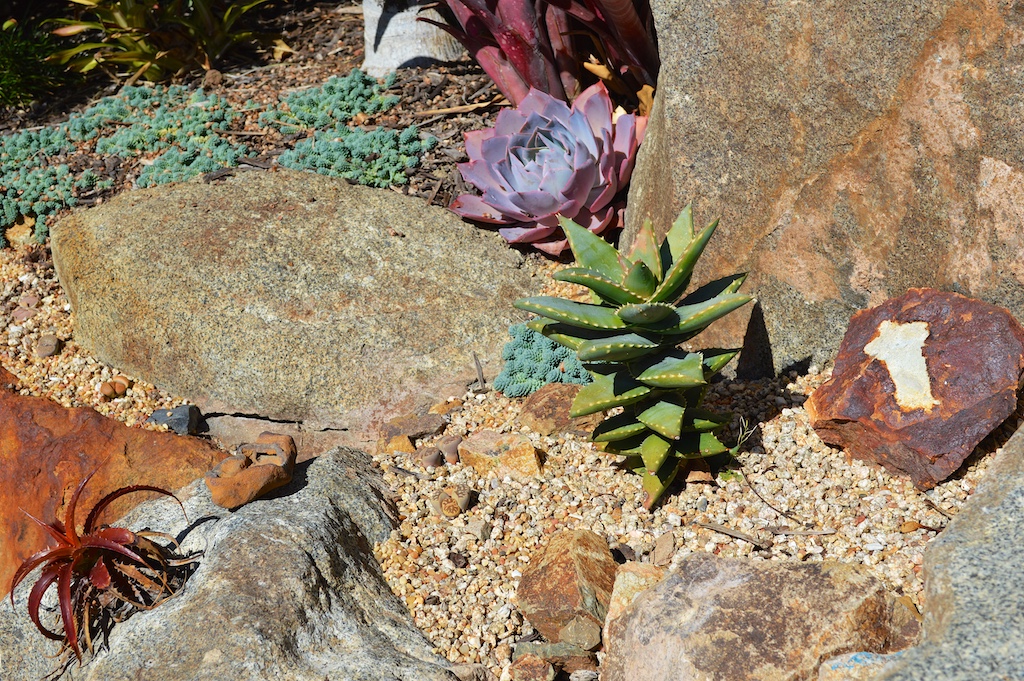 While reworking that  area I also wanted to plant a small cutting of Aloe pearsonii that I had. I planted this Aloe pearsonii in a small area between some large boulders knowing that it was much slower growing than Aloe ‘Hellskloof Bells. Looking at the photo below I never knew this Aloe pearsonii grew so much over the last nine months. It has put on six new leaves that I frankly never would have noticed if I didn’t pull up the old post today. 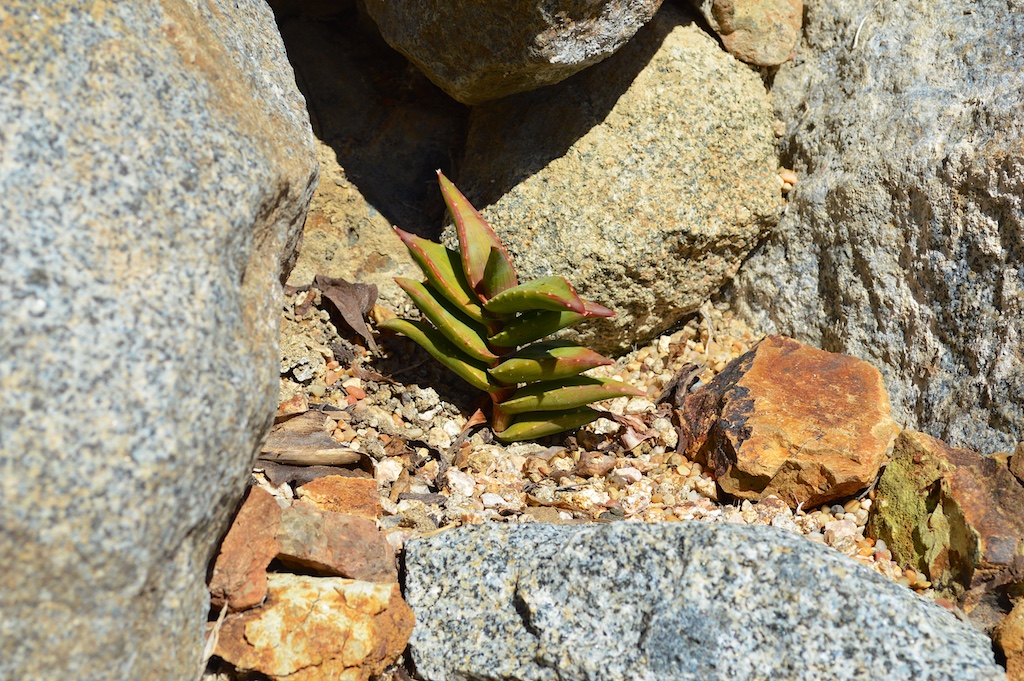 Jacaranda jasminoides was the subject of a post during the month of May. In that post I had mentioned that Jacaranda jasminoides flowers virtually year-round and that it doesn’t drop its leaves and go deciduous like all the other Jacarandas species you find growing in Southern California. While not near as floriferous this time of year, it is non the less impressive to me that it still blooms even into December. Plus it is still holding all its leaves. What an amazing tree it is growing into. 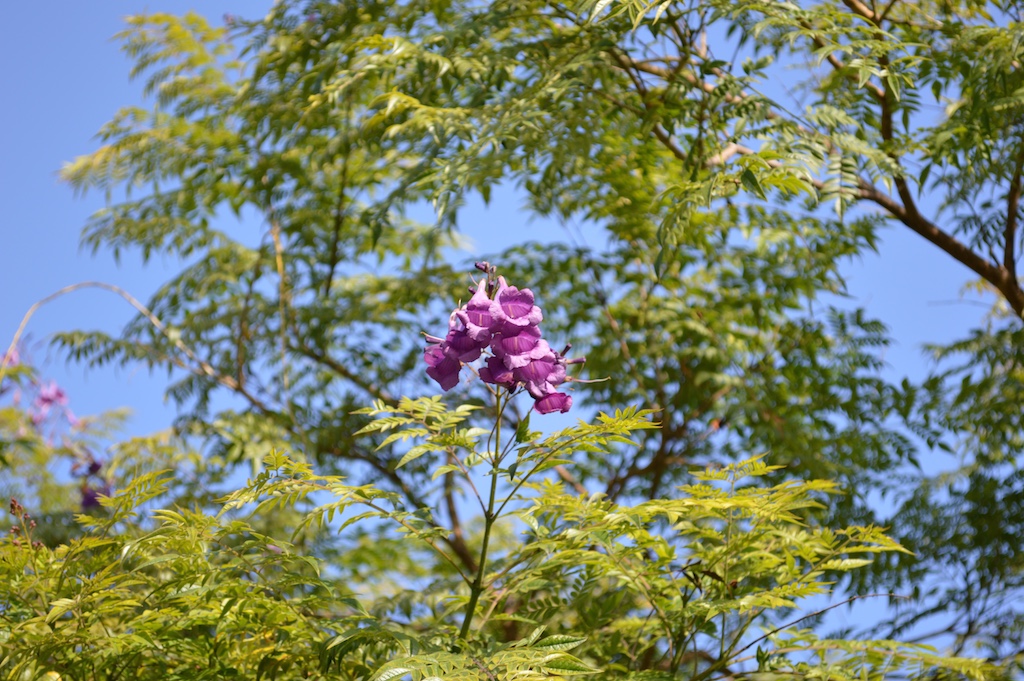 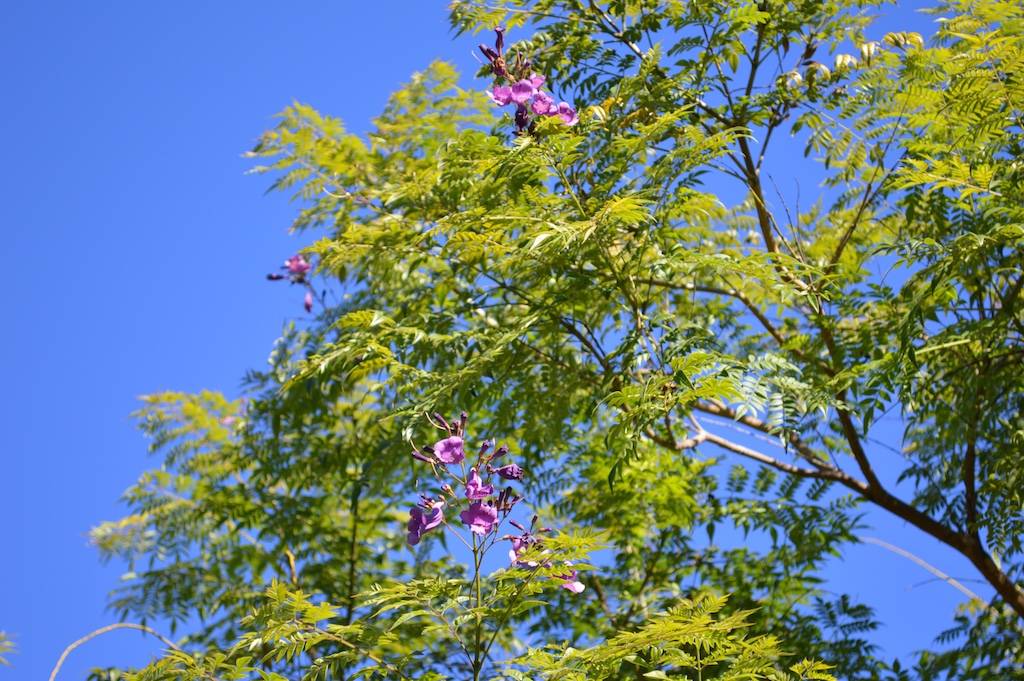 Moving all the way back to January I wrote a post on how to properly propagate Vriesea hybrid bromeliads. In that post I took off four Vriesea fosteriana × hieroglyphica pups from a mother plant which had already flowered. Three of those pups were good sized and one was a runt. In many cases a pup that is too small when taken off the mother plant will usually die. Or in my case – just grow ridiculously slow. Three of my pups grew into beautiful plants ready for the garden. The runt of the litter, while still alive, has not done much.

Before jumping on a plane to fly to Myanmar in early November I put up a quick post showing off the amazing hibiscus blooms I had in the garden during the month of October. For me September and October are the best time of the year for hibiscus in the ground in Southern California. However, what many readers might not know is that all those blooms I uploaded were warm-weather blooms and that many hibiscus flowers look much different once the cold weather arrives. One of the best examples of this is can be shown using Hibiscus “Corazon”. The first picture below was the one used in that November post. The second picture shows what my Hibiscus “Corazon” looks like right now in December. What a change huh? 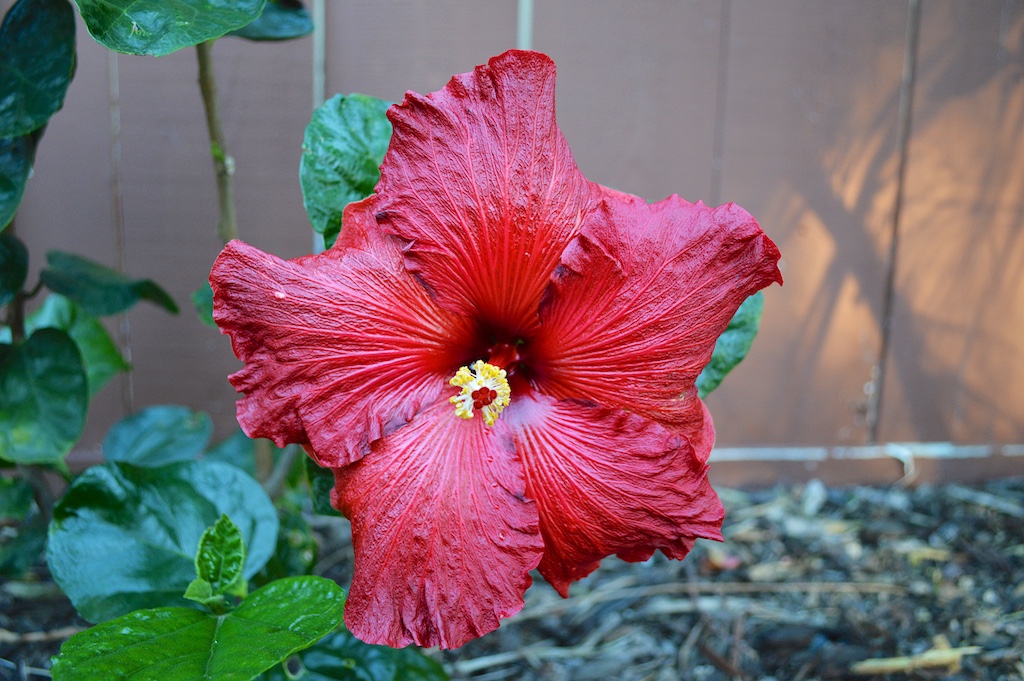 My Cuban Brown Anole Lizards are now famous. They made it into the Herpetological Review. I guess this makes it official that my lizards are now classified as “established” in my area. 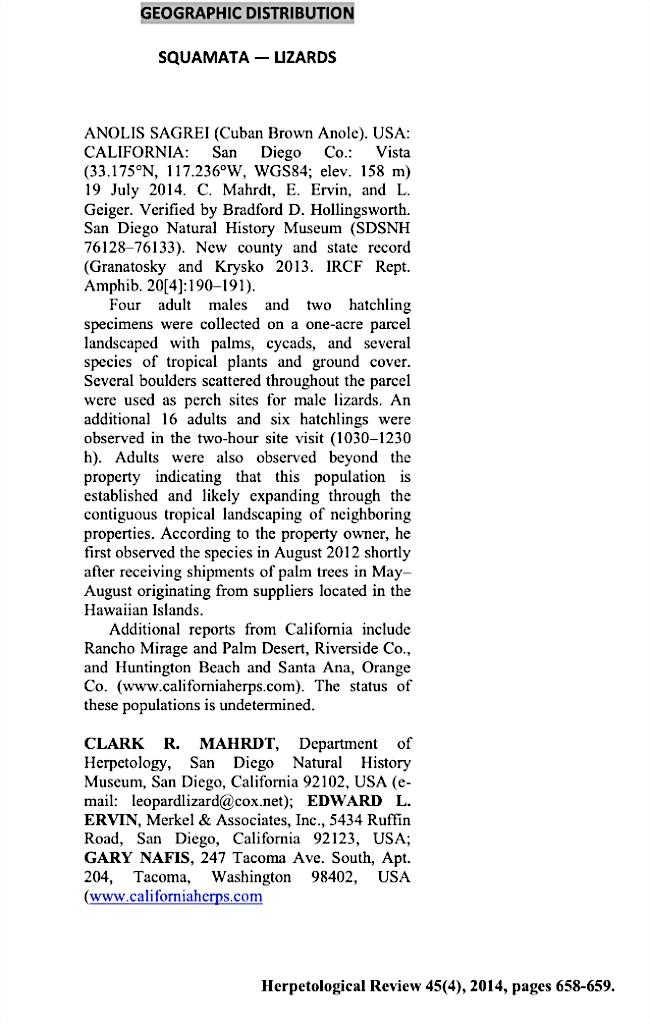 A good friend of mine was planning on cutting down two Dypsis leptocheilos (Teddy Bear Palms) in his yard. He agreed to a stay of execution if I was willing to dig them and transplant them to my house. The opportunity to acquire two flowering-sized Dypsis leptocheilos doesn’t come often in our Mediterranean climate. I quickly accepted his gracious offer and by the end of March they were moved (along with a Jubaea chilensis) to my yard. As of today, neither of the two transplanted palms have opened any new fronds. This can be expected as so many roots were cut during the dig. As of right now I am currently waiting on four spears to open on each palm. It is my hope that these palms will have produced enough roots to open these fronds by next summer.

Pelargonium ionidiflorum (Celery Scented Pelargonium) is the favorite ground cover of choice in my yard. So much so that the first plant review that I ever did on my blog was on Pelargonium ionidiflorum. It is during this time of year that I am reminded just how awesome of a ground cover it truly is. Celery Scented Pelargonium never wants to stop blooming and it makes borders in a garden come alive. It still boggles the mind why the plant is not found in the nursery trade more often. I received a lot of positive feedback after that review written. The review prompted a few readers to go out and find this plant for their garden. 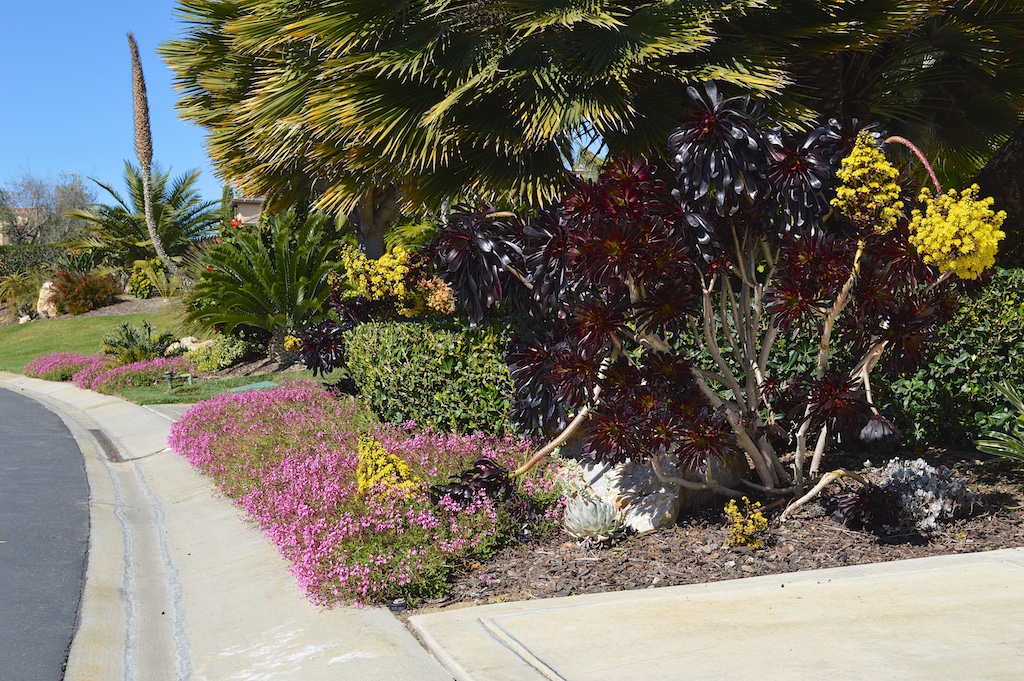 Radermachera ignea is a very rare flowering tree here in Southern California. So when a case of being in the right place at the right time came around, I took the opportunity to pick some seeds off one of the only plants growing in Southern California. The seed of Radermachera ignea germinated rather quickly and now close to a year later I have some good sized plants that are ready to be put in the ground or given to good friends. 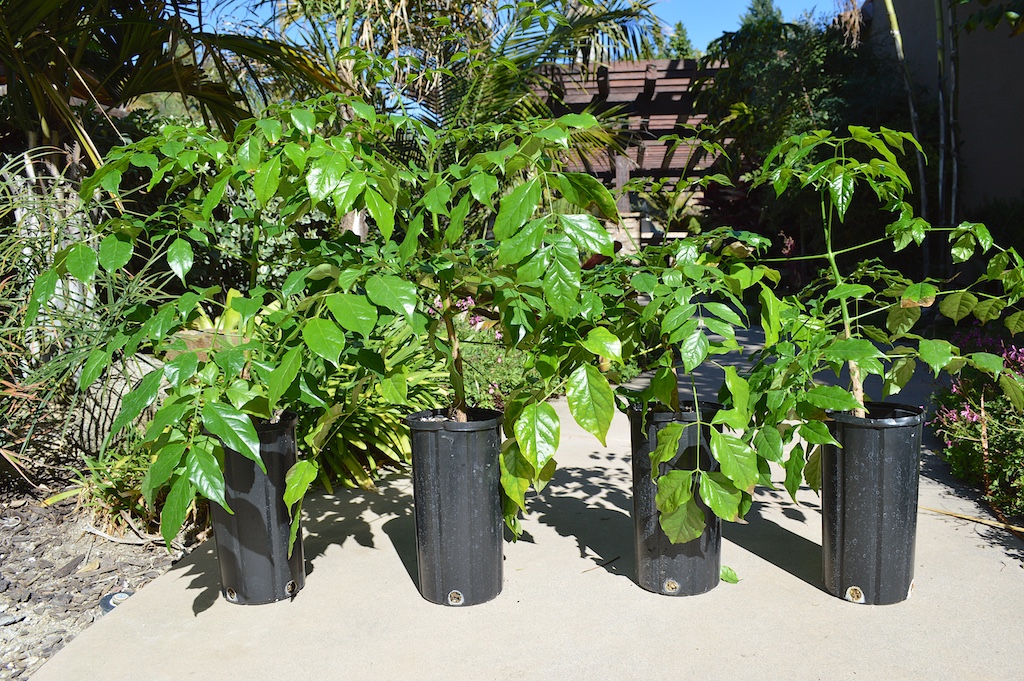 These Radermachera ignea were also part of a potting soil experiment that I will be documenting next week. So I guess the following weeks post is something of an update as well.